Why did I decide to move to Australia in December, smack in the middle of my beloved Christmas season, where I’d be alone for the holidays?

One reason: I was dying to see the New Years Eve fireworks in Sydney.

Y’all know about my love for bridges, and the Sydney Harbour Bridge is certainly a stunner. Throw in the Sydney Opera House, a city skyline, and some fireworks and hot damn! Show me a better backdrop for a colorful pyrotechnic display, I dare you.

So, catching the Sydney New Years Eve fireworks was very high on my Must-Do List for my upcoming year in Australia. Almost immediately after booking my flight to Sydney, I began researching locations from which to catch the fireworks. If I wanted a good view, my options were threefold:

While trying to wrap my mind around #2 – aka giving up 18 hours of my life for, best case scenario, a view of the fireworks framed by trees from the garden – I turned #3 over in my mind. Could I justify dropping that much money on one night? Every frugal bone in my body screamed HELL TO THE NO out of habit. 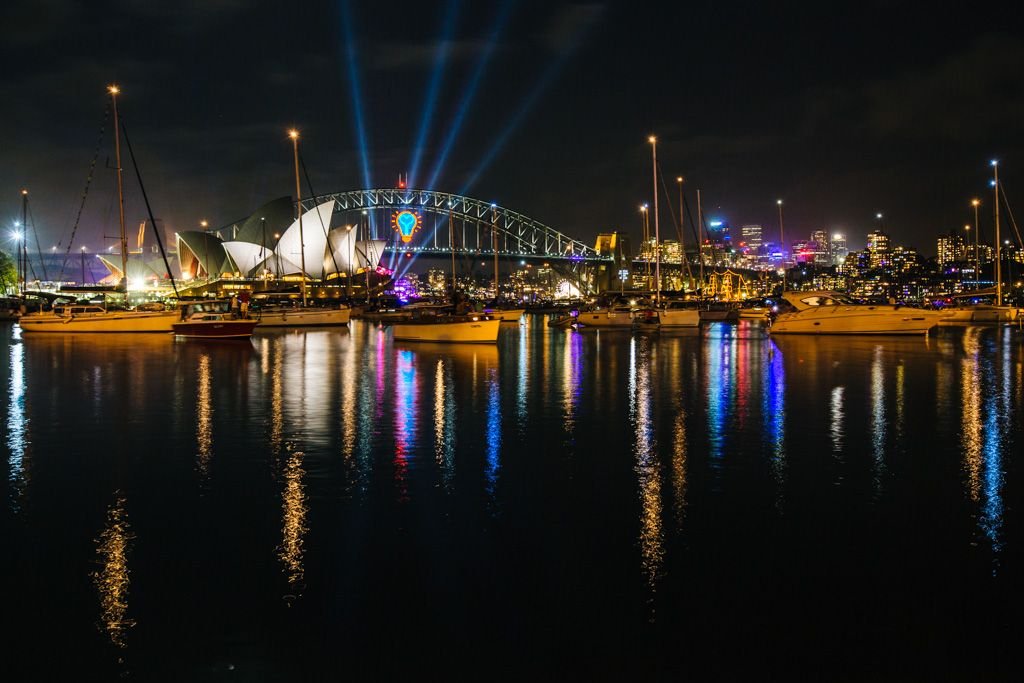 View from The Point
But I didn’t give up Christmas and extra weeks of paid work to take a gamble on this. I was here to witness the Sydney New Years Eve fireworks in their finest glory So call it YOLO, go big or go home – I splurged on a ticket to see the NYE fireworks in Sydney.

The Royal Botanic Garden provides some of the best and most easily accessible views of the Sydney Opera House, Sydney Harbour Bridge, and city skyline. It’s an extremely popular location from which to catch the Sydney New Years Eve fireworks.

There are a few ticketed New Years Eve parties held in the Royal Botanic Garden: Lawn With The View, The Point, and Midnight At The Oasis. If you don’t have a ticket to one of these, the only other location from which you can view the fireworks in the Botanic Garden is at Mrs. Macquarie’s Point, the wooded hill just behind The Point and Midnight At The Oasis (see rejected Option #2 above). The garden is closed to non-ticket holders at 3pm, but in reality you’ll need to arrive by 10am if you want a chance at a decent spot at the point. 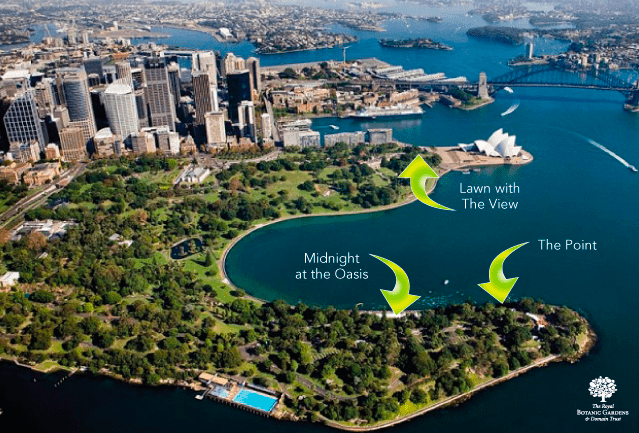 Lawn With The View – $270 AU – Bennelong Lawn
This is the most affordable and casual option, where attendees sit in lawn chairs or picnic blankets on a hill near the Opera House. You’re closer to the fireworks, but don’t have that sweeping view of the Sydney Opera House right in front of the Sydney Harbour Bridge. A picnic box is included for snacking, while drinks are available for purchase.

The Point – $355 AU – Fleet Steps North
This festival-themed party has guests sitting at tables right on the harbour just near Mrs. Macquarie’s Chair. Food from the adjacent vendor tents is included and drinks are available for purchase at the cash bar. From this location you have THE most sweeping view of the skyline, where the Opera House appears right next to the Harbour Bridge. I thought this would have been the best spot for pictures of the fireworks, but the view is obstructed by too many sailboat masts.

Midnight At The Oasis – $385 AU – Fleet Steps South
This is the fanciest option, located just next to The Point but slightly more inland. From here, the Opera House appears beneath the Harbour Bridge rather than right next to it, but the view is not interrupted by large sailboat masts so it’s actually a better vantage point if you’re concerned with getting the best photos of the fireworks. Attendees are assigned to communal tables and get to enjoy a three course meal (excluding drinks), live band, and dance floor as well. When I booked just 5 weeks out, this was the only event that still had tickets available.

Note: In 2015, there will be a 4th party added called NYE Under The Stars. It will be an all inclusive food/drink event located right next to Bennelong Lawn for $395 AU.

Midnight at the Oasis

While most everyone at my hostel had packed up breakfast, lunch, and dinner and woken up at 5am to spend the entirety of New Years Eve camping out in the Botanic Garden for a chance at a free obstructed view of the fireworks (again, see the aforementioned rejected Option #2), I took it easy all day and didn’t venture out until early evening.

The party began at 7pm. As we entered, we were all given boxes containing fancy appetizers like salmon, ricotta salad, and trout potato salad. I plopped down at my empty table, quickly surmising that it was the reject table due to its undesirable location just behind a tree. It hardly mattered to me though, since I planned on standing at the water’s edge to catch the fireworks. 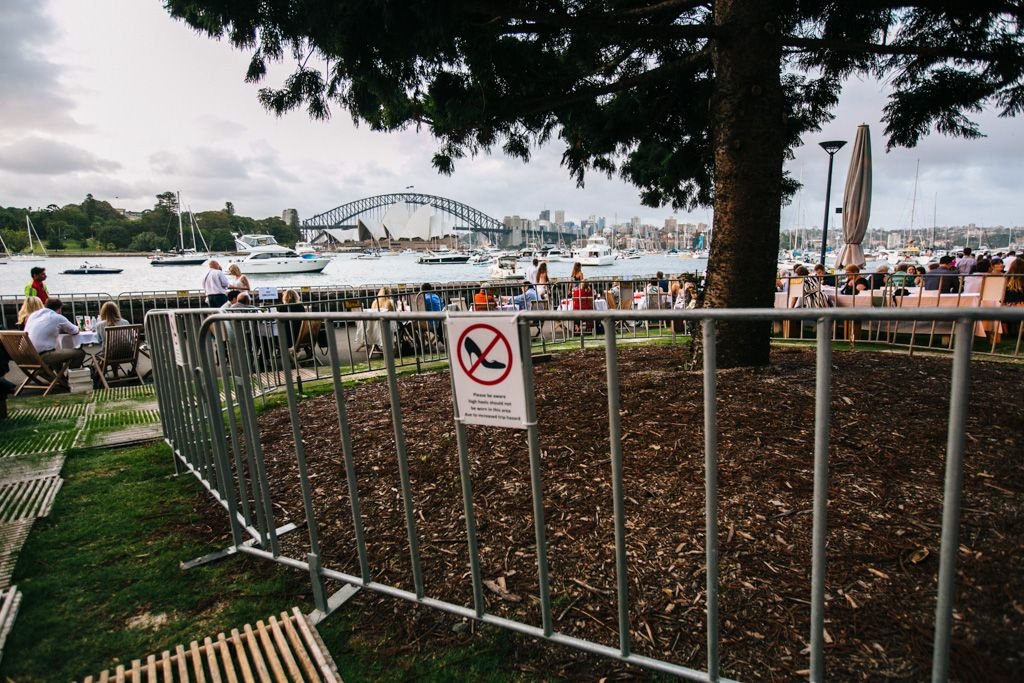 I had assumed I’d be placed at a family table and forced to make small talk with older folks around me, but thankfully I was joined by a group of five friends from the UK who were around my age. I couldn’t have asked for better company! Chatting with them was an excellent way to kill time before the fireworks.

In my very unprofessional opinion, the food provided was not so great. To be fair, though, I think this might be due to my meal choices. Did I really choose beef and strawberry cake over chicken and chocolate cake? Really?! I love chicken and chocolate infinitely more, so not sure what I was smoking when I selected the other options instead. My UK companions seemed to be underwhelmed by the food as well, though they did say the chocolate cake was lovely. 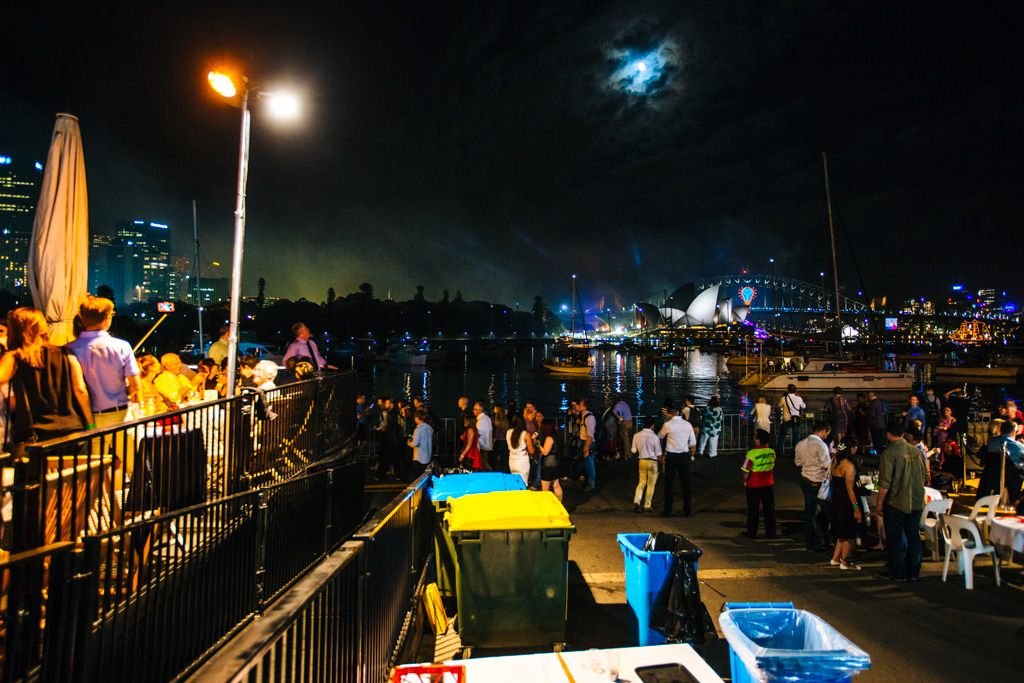 One thing I did really enjoy was the live band that played a mix of covers and original songs. With all the nicely dressed folks around me sipping champagne, it felt like I was enjoying music at a wedding reception. They were on until 10:30, at which point the music transitioned to a DJ set. I opted not to hit the dance floor because I was solo and with a massive backpack of expensive photo gear – but mostly, I was preoccupied with scouting a prime spot on the waterfront and taking test shots before the fireworks went off!

OKAY OKAY, enough with the wordy recap. You want to see the fireworks, don’t you?

Disclaimer: I’ve watermarked these images because I feel like they’re susceptible to being ripped off, and that’s no bueno. I know, watermarks are the worst – I hope never to have to use them again!

At 9:00, a small 8-minute display of fireworks went off around the harbour: on the south side of the Opera House near the city (very close to where Lawn With The View was held), and further out in the harbour toward Fort Denison and The Point. There was only a blip of fireworks under (not over) the Harbour Bridge, so it wasn’t quite the shot I was looking for – but it was good prep for the big show at midnight! 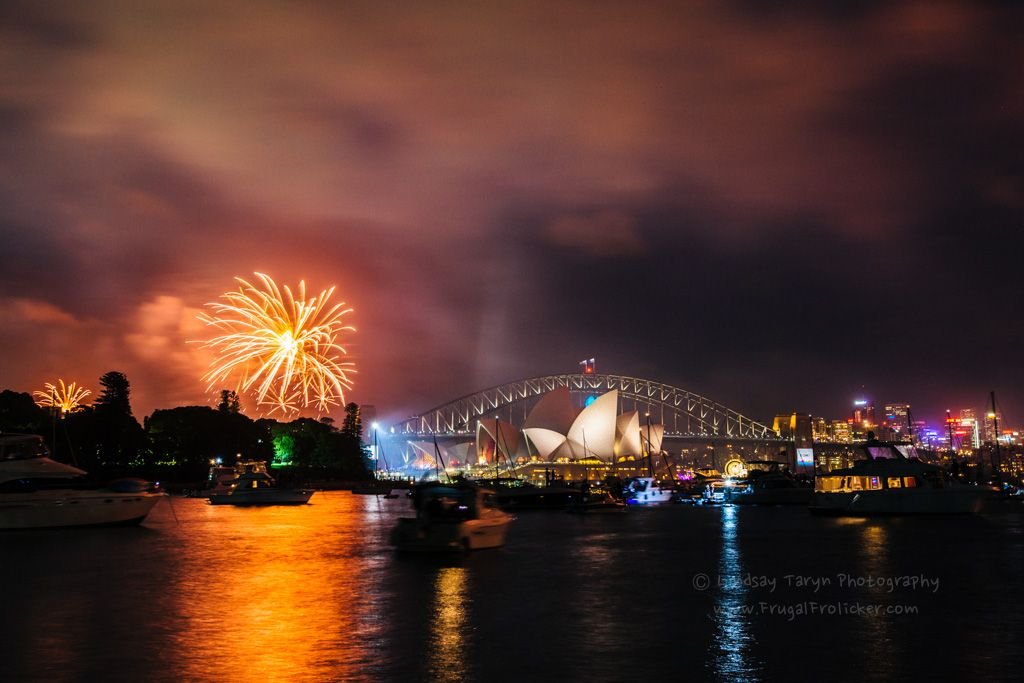 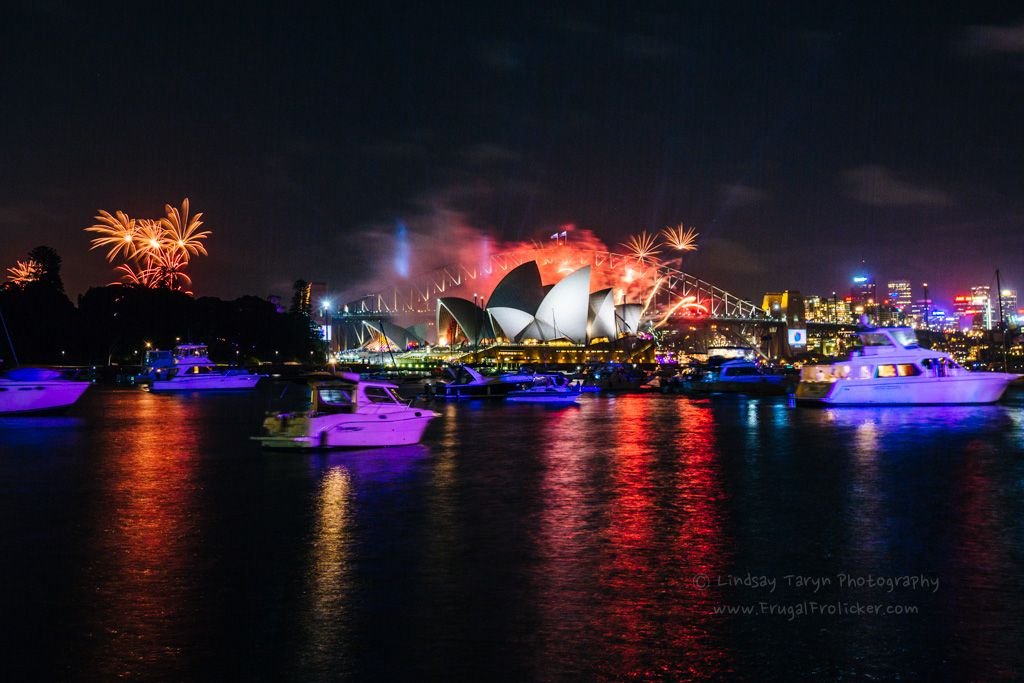 The big fireworks show started at midnight and went on for 12 too-short minutes. In addition to the same two small fireworks clusters from the 9pm show, they set off bigger fireworks over the Harbour Bridge and Opera House. There were only a few of these bursts, though. I’m not sure if this is the reason behind it, but those displays left big clouds of smoke and haze over the bridge. Allowing a minute or two for the smoke to clear before setting off more fireworks yielded better visibility in the end.

And fear not! There was plenty of space along the waterfront to set up a tripod and go to town photographing the fireworks. Most people were content sitting at their table or viewing them from the bar. 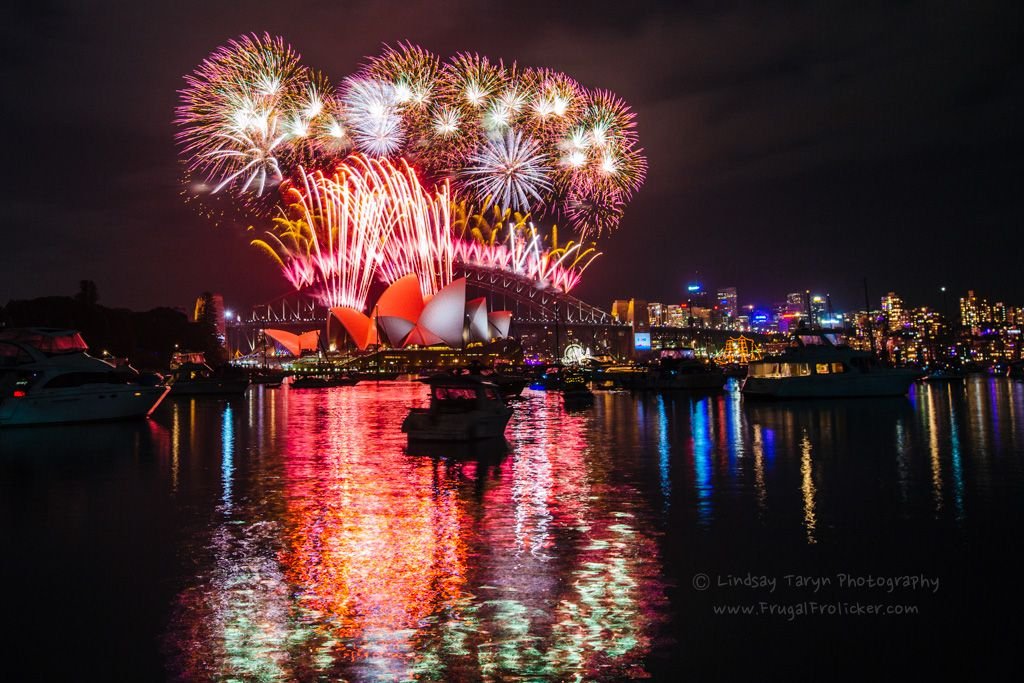 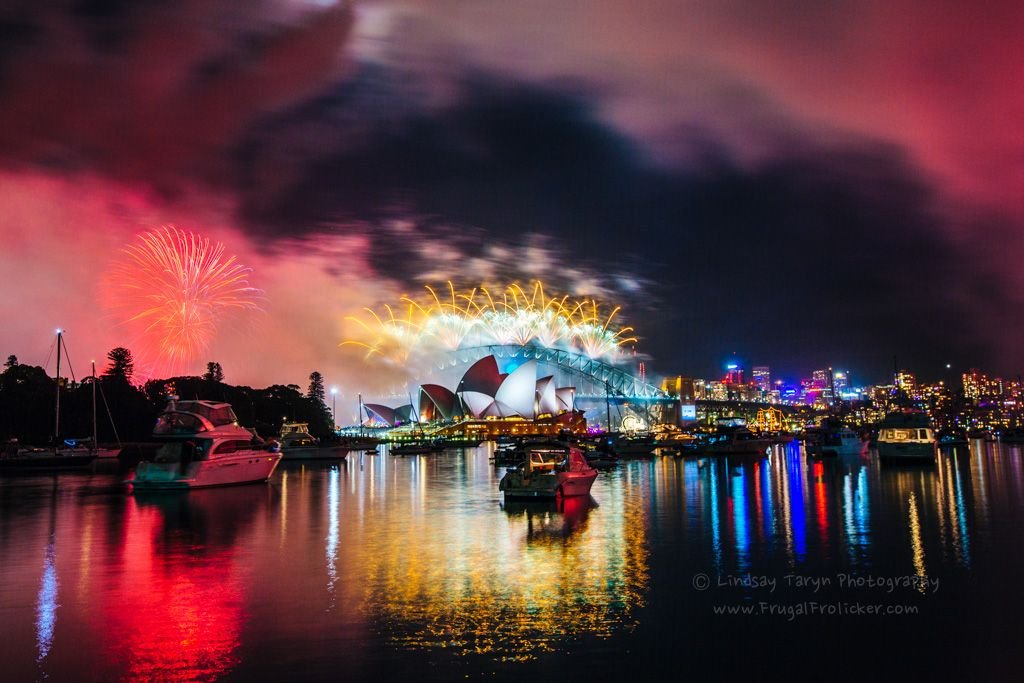 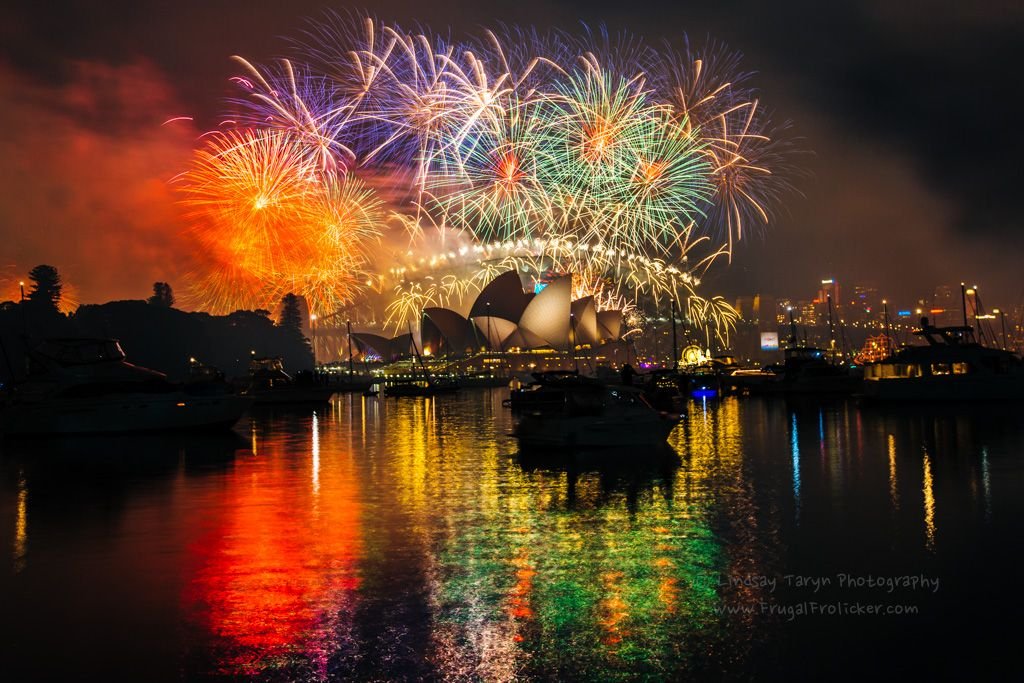 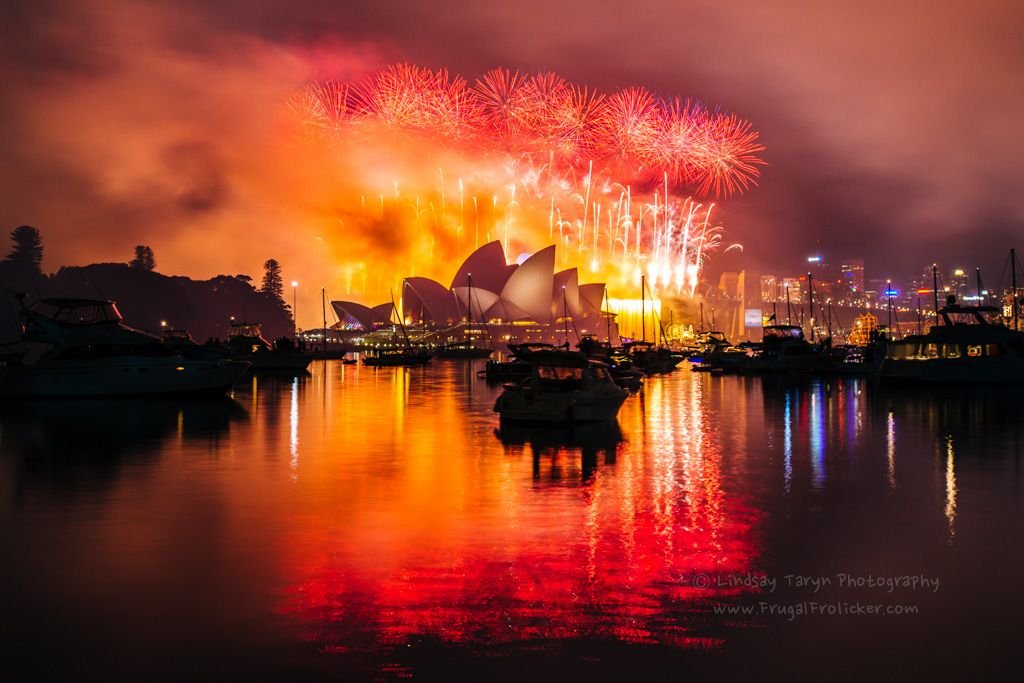 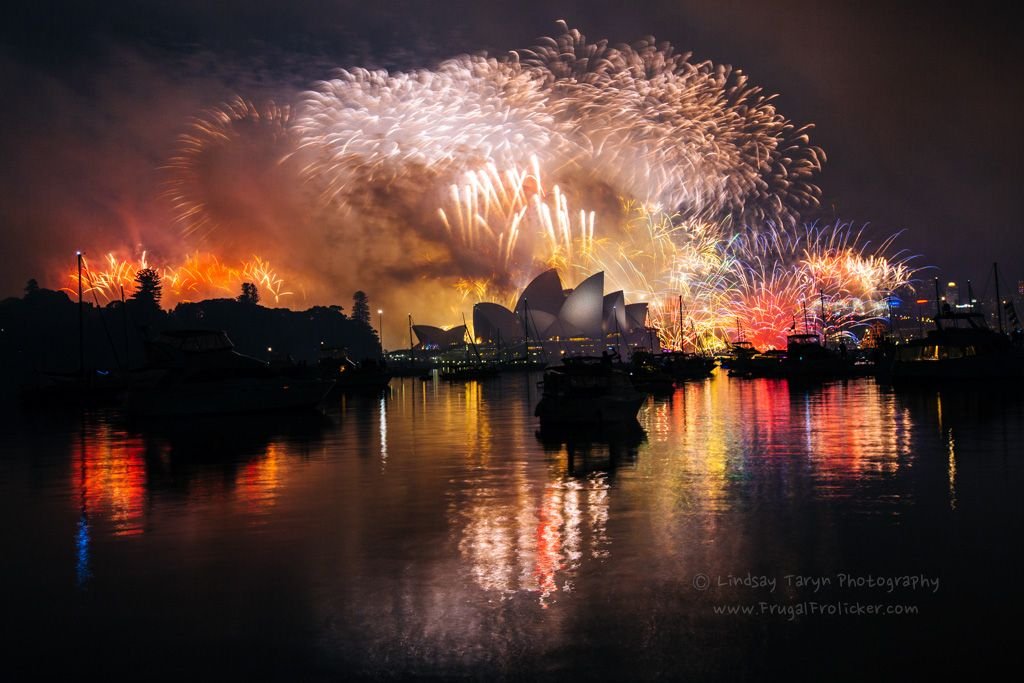 So… was it worth it?

For me, yes. I know I would have regretted it had I not gone all out and splurged on my New Years Eve ticket to Midnight At The Oasis. I don’t think it was quite worth $385 AU, but I had a great time and got the photos I wanted so I’m happy. It’s not really something you would do every year, but to experience it once is something special for sure.

And for anyone debating between the New Years Eve parties: If you prefer the excitement of seeing the fireworks up close and right above you, opt for Lawn With The View or NYE Under The Stars (the new party debuting in 2015). Otherwise, if you want a photo-worthy view of the fireworks over the skyline, Opera House, and Harbour Bridge, go for one of the other two parties. They are two entirely different experiences, so consider which is more your style.

Alternatively, if you’re considering the free Option #2, camping out all day at Mrs. Macquarie’s Point: I can’t speak from experience, but those at my hostel who did it were completely exhausted from the experience and did not come back raving about how awesome it was. The general consensus was that they were glad they did it, but it wasn’t super amazing. 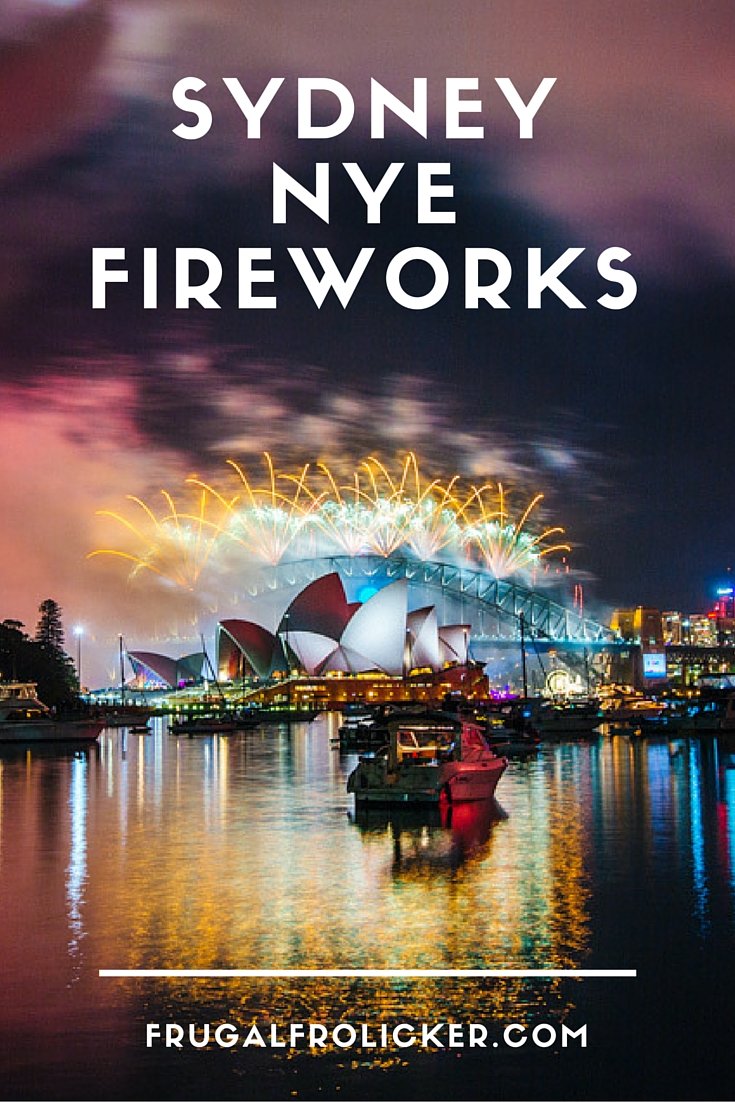 If this article helped you, I’d greatly appreciate it if you’d consider making your Sydney trip purchases through the following affiliate links. Any profits I make through your purchases go directly into covering the ever-increasing cost of running this site at no extra cost to you! :)

Check out my other posts about Sydney: