By on Australia Boating Outdoor Adventures

Here’s the story of how this frugalista ended up jetting all over Sydney Harbour in the boat equivalent of a Ferrari:

So late last year, the fine folks at Any Boat approached me about taking a ride with them out on Sydney Harbour. Without hesitation, question, or research, I said hells yeah. Because is there anything more glorious than exploring Sydney by boat? (NOPE!)

I was super busy at the time – it was when all my visa nonsense came to a head, and I was about to leave town for Melbourne and then the US, so the boat trip didn’t happen. But the second I felt settled into my new place in Sydney, I reached back out to them and finally scheduled my Sydney Harbour boat trip.

Imagine my surprise when this gorgeous little boat pulled up to the wharf! Carly and I looked at each other like, is this ride for us? Had I been slightly less distracted last year, I might have realized that our ride, La Dolce Vita, would be a sexy Italian wooden speedboat. Hyperbole aside, there is no other boat like it on Sydney Harbour.

I mean, we were already pretty stoked for our afternoon on Sydney Harbour, but this took our excitement level up a few notches. We hopped in at Darling Harbour and began our speedboat adventure! 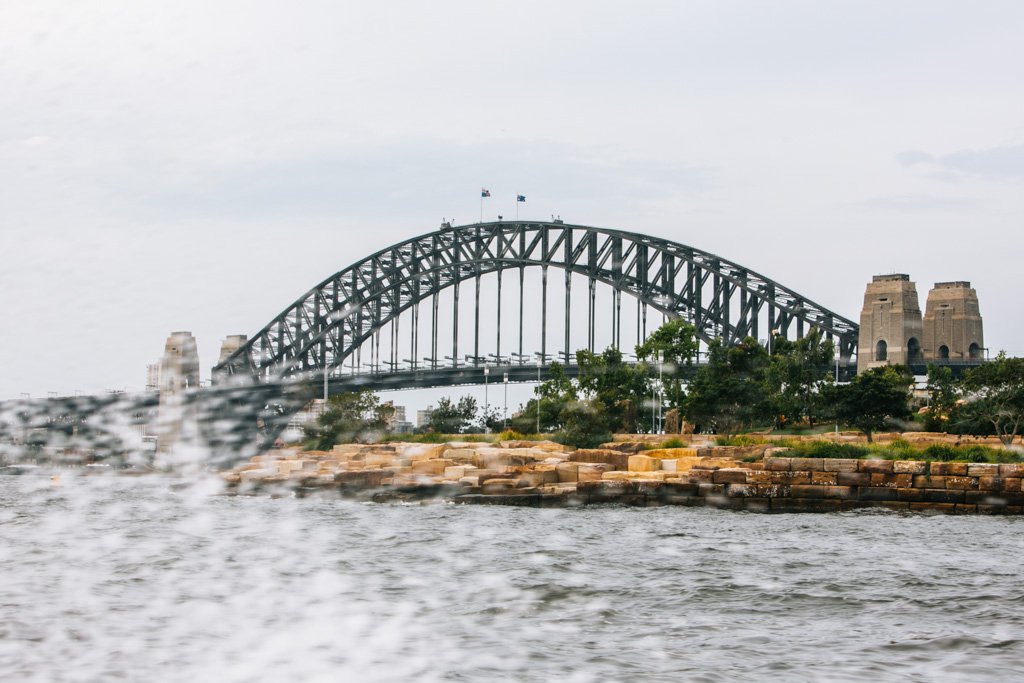 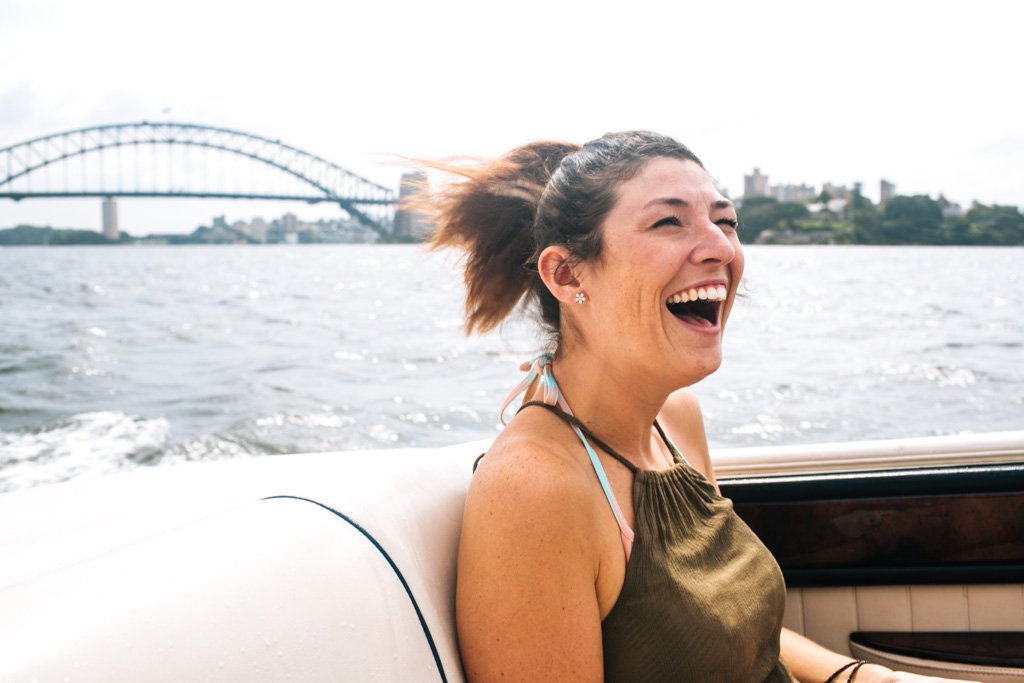 Our skipper, Any Boat owner Daniel, asked us straight away where we wanted to go and whether we had any requests. To be honest, neither of us had our hearts set on any particular bay in the harbour – we were just thrilled to be out there on the water!

I did ask if they had a set route that they typically take guests on, though. Because what kind of article would this be if I got to zip around Sydney Harbour on a special, customized boat trip while other guests didn’t have that option? (Answer: not very compelling). Daniel assured me that all guests on La Dolce Vita can customize their route, and can even opt to be dropped off for awhile at a secluded beach on the harbour (By the way, you should totally do that if you’re new to Sydney and/or have limited time. The hidden beaches around Sydney Harbour are one of the best things about Sydney!).

Ultimately we had him take us on their most popular route around the southern bays, just east of the Sydney Harbour Bridge: Woolloomooloo, Double Bay, Point Piper, and Rose Bay.

BUT FIRST: the majestic, glorious, and downright magical Sydney Opera House from every which angle! 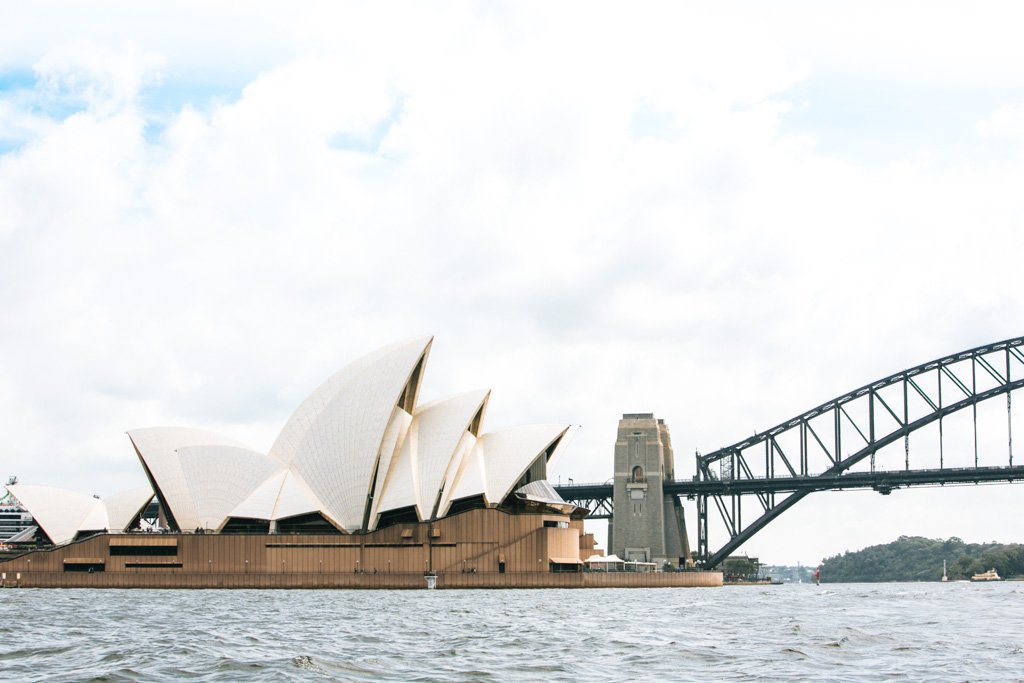 Aside from having an absurd-looking name, Woolloomooloo also possesses a fancy-pants wharf on which Russell Crowe happens to own a multi-million dollar penthouse. NO BIG DEAL. Fun fact: that boat in the middle supposedly belongs to Russell Crowe! And his penthouse is on the wharf just behind it.

If you want to gawk at some of Sydney’s finest real estate, you could do worse than wandering around Point Piper. Its Wolseley Road has the distinction of being the most expensive residential street in all of Australia. We slowed the boat down to allow ample time for gawking and jaw-dropping. 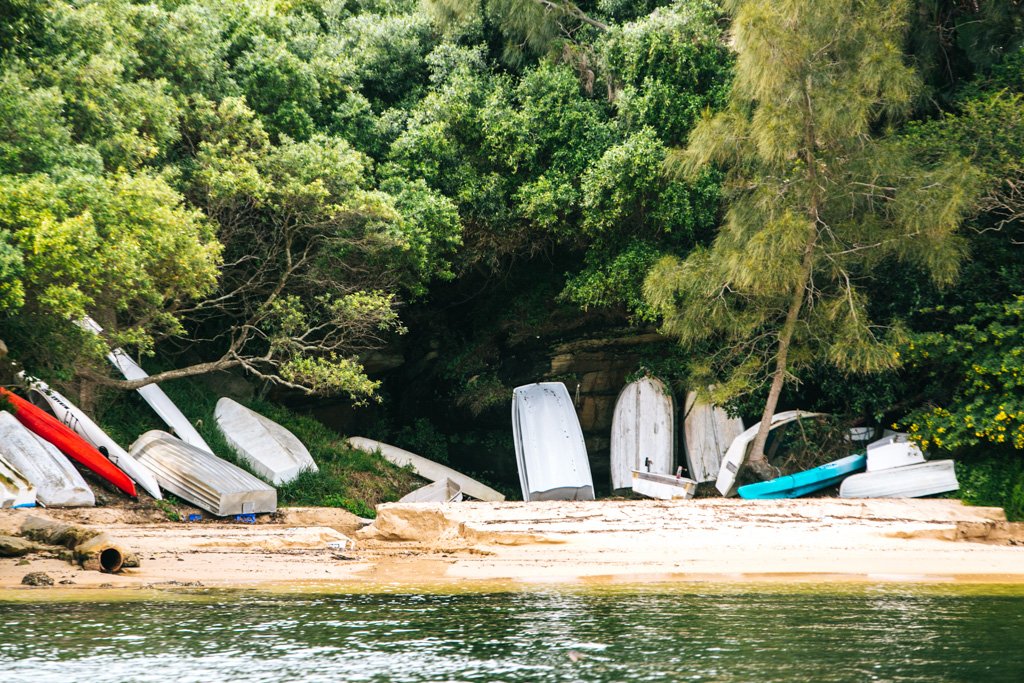 Fun fact #2: I have hung out inside the penthouse in the top-right of that Point Piper apartment building in the middle! Why oh why wasn’t I in Sydney last year for their NYE party?

From Rose Bay, we headed back toward Circular Quay along the northern reaches of the harbour. I don’t really have any photos of Rose Bay as I was feeling a tiny bit queasy around this part of the boat trip. I almost always forget to pack my motion sickness pills or wristbands because I’m the worst (see: Kauai Helicopter Tour, Whitsundays Sailing Trip, Phillip Island Jet Boat, Grand Canyon Scenic Flight). This was nowhere near close to the motion sickness I suffered on those outings, though. In fact, I wouldn’t even classify it as such because I didn’t get sick and felt 100% fine shortly after, thank the lord.

That said, if you’re prone to motion sickness, bear in mind that La Dolce Vita is a small boat and you will feel the finest of movements, particularly when the water is choppy. I felt good when we were speeding through the harbour, but a little dizzy when we slowed down enough to feel the up-down motion of the water. So I’d definitely recommend bringing along some Dramamine just in case. 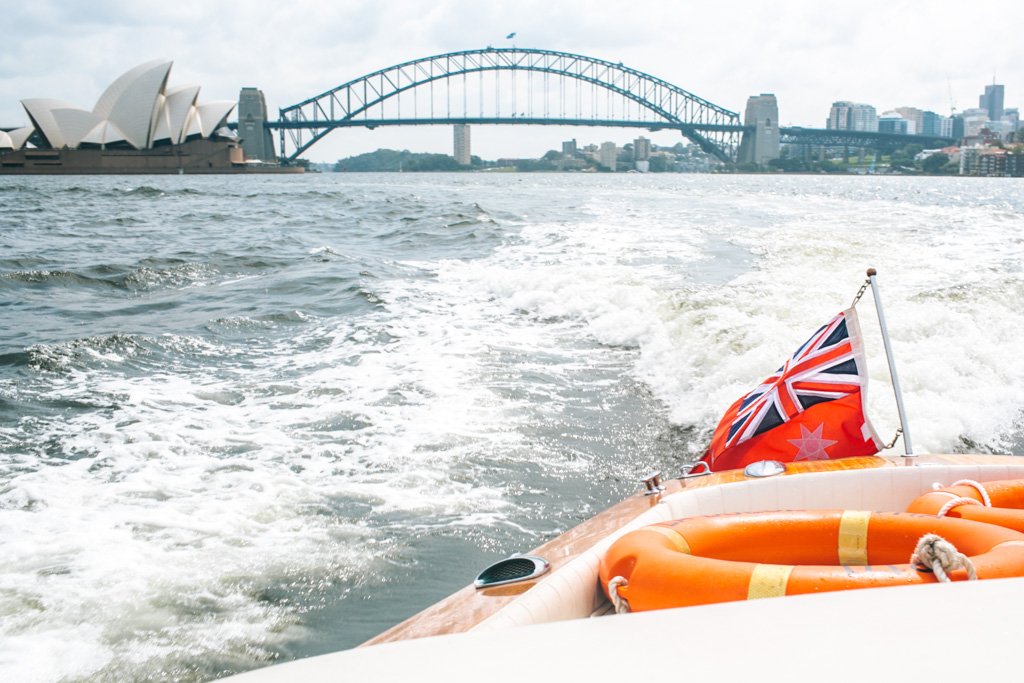 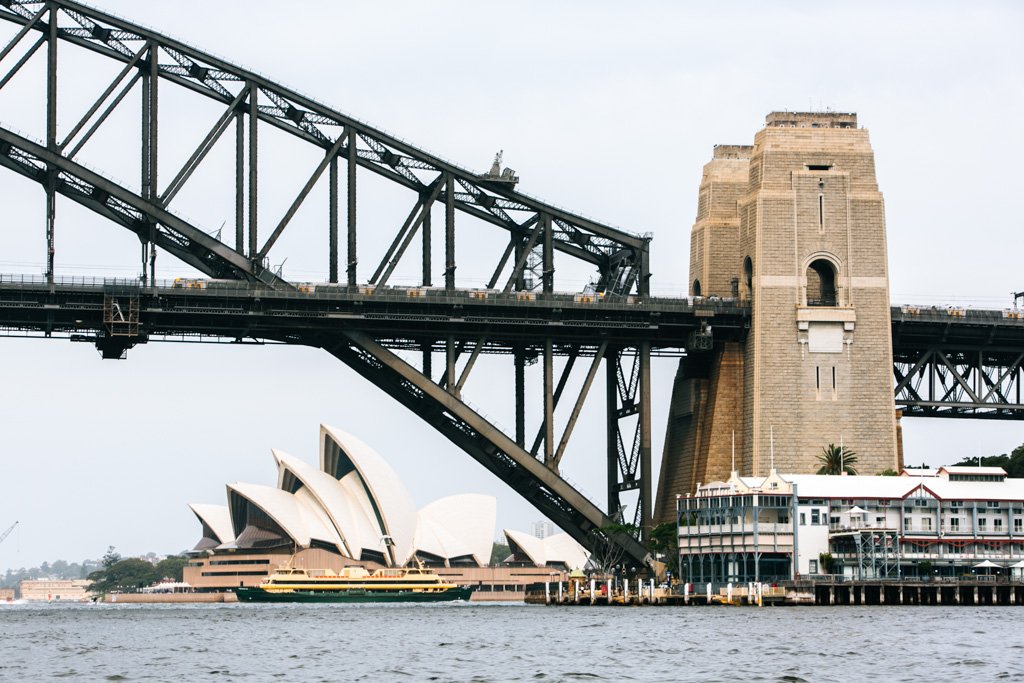 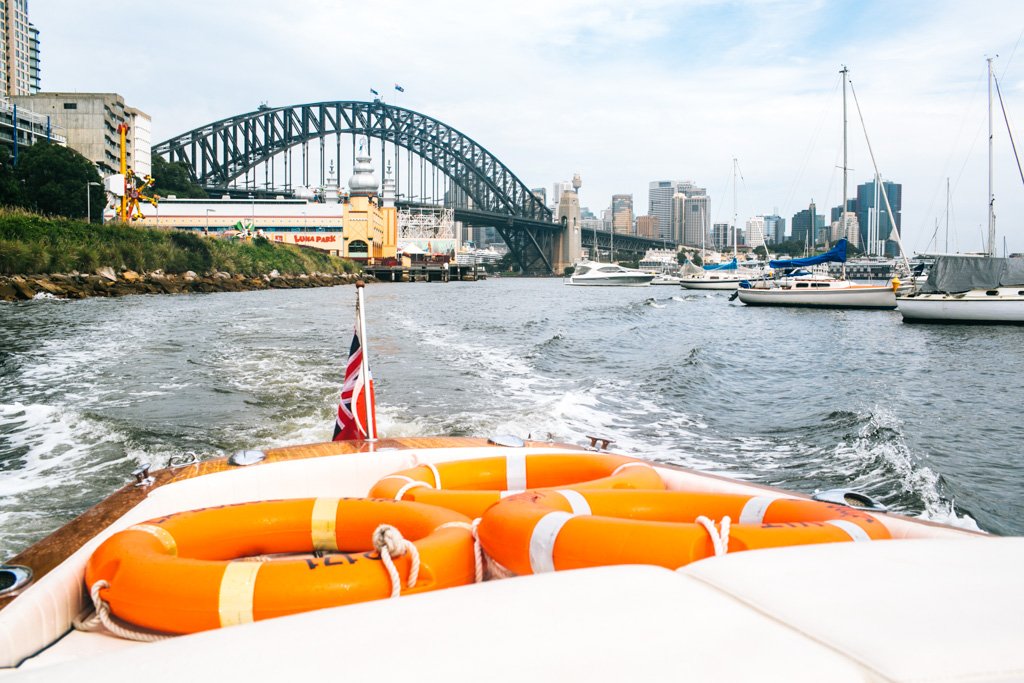 We cruised into Lavender Bay just before heading back into Darling Harbour. FYI this is an awesome spot to get the Sydney Harbour Bridge + Sydney Opera House in one photo. It’s also where Any Boat’s other boats are moored, and where their head office is located.

Daniel pointed out several of their other boats, which can hold anywhere from 4 to 200 guests. Some of them, like La Dolce Vita, are typically used for transfers around the harbour; others tend to be hired for special occasions, or for large group outings (party boat anyone?).

La Dolce Vita is often booked for wedding transfers in particular. Talk about arriving at your wedding in style! Carly and I weren’t getting transported to a wedding, but we still had a fantastic time touring Sydney Harbour on La Dolce Vita. Highly recommend for a special day out on the harbour!

Thank you to Any Boat for taking us on a complimentary Sydney Harbour boat tour. Note that all opinions expressed here and elsewhere on this blog are my unbiased own, and are uninfluenced by any gifts or incentives I may receive.

As of March 2017 —
La Dolce Vita can be hired from Any Boat for AU$495/hour, with a minimum of 2 hours per booking. They have an extensive collection of other boats available for hire as well, many of which can accommodate a large number of guests (hence making it a very affordable day out when you split the cost between several people).

Tags: Any BoatboatSponsoredSydneySydney Harbour
Previous Article12 Things You Must Add To Your Kauai Itinerary
Next Article Coogee to Maroubra Walk | Sydney Coastal Walk