While rummaging through my image archives recently, I rediscovered some real selfie gems taken on my travels over the past 8 years. I’ve never shared most of these, because let’s be real: we live in an insta-world where there’s only room for the highlight reel. People typically want to see pretty pictures, not ones plastered with silly mugs.

As ridiculous as these photos are, they’re some of my favorites because they’re real. They show me being my goofy self. I’m never going to be the travel blogger who dresses up, carefully poses herself in the frame, then gazes off into the distance as the shutter goes off. I am, however, going to continue adding to my secret collection of really ridiculous and frequently embarrassing photos of myself pulling faces, striking bizarre poses, and making some seriously alarming outfit choices.

On that note, I thought I’d share 22 of my most ridiculous travel selfies. Are you ready for this? 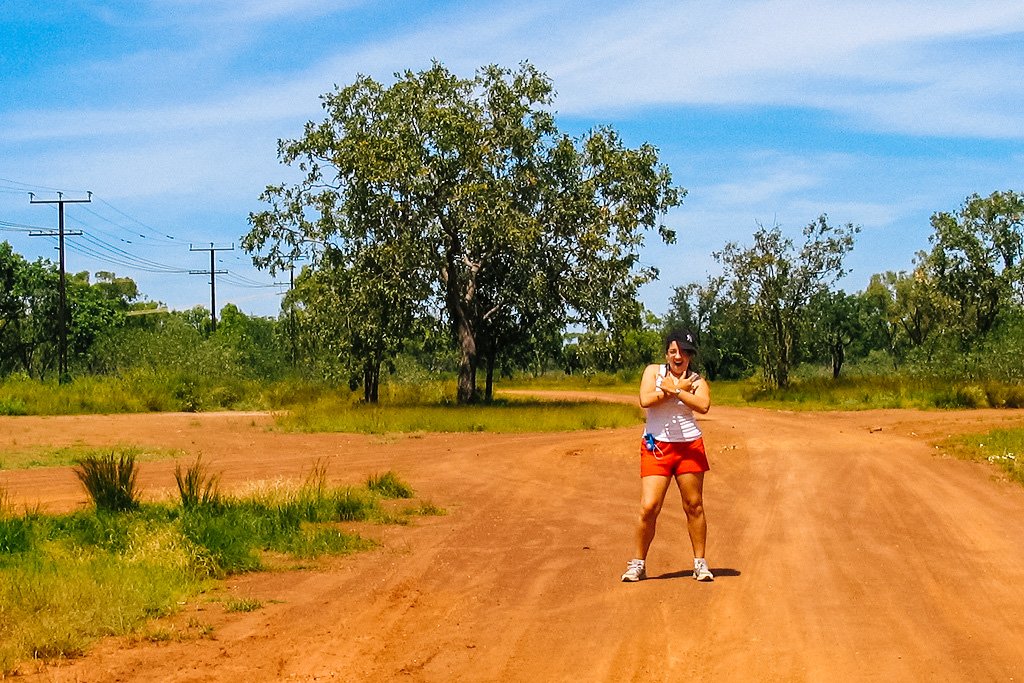 This was somewhere between Alice Springs and Darwin on my Outback trip during my year studying abroad in Sydney. I don’t know what in sam hill I was thinking when I struck this pose in the middle of the Australian desert. I’m sure I did it for no reason other than the absurdity of it (which you’ll see is a common theme with me). Look at that old school scroll-wheel ipod!

Fun fact: I’ve toted around a Yankee cap on nearly all hikes and trips I’ve taken since this year. It’s a fun way to show my NY pride, stamp a big fat *I’M AN AMERICAN* right above my forehead, and shield my face from the sun while hiking or laying on the beach. 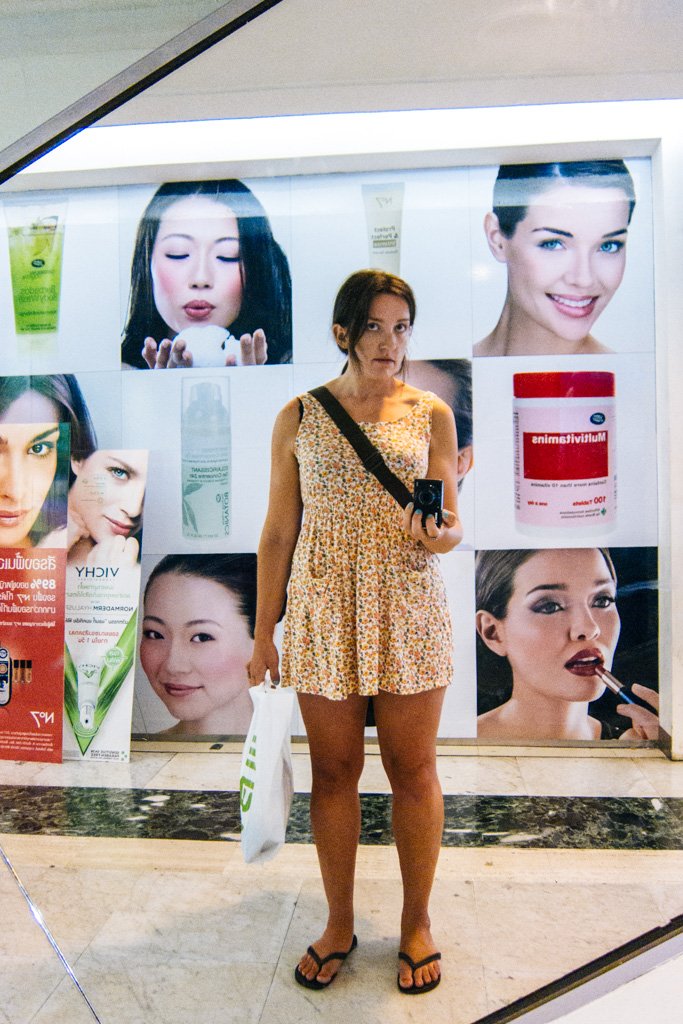 Here I am at the mall in Bangkok, testing out my new dinky point-and-shoot camera which I bought to temporarily replace my dSLR that mysteriously stopped working while in the Thai Islands. Between my signature eyeroll and the numerous whitened faces behind me, I find this photo pretty amusing. Also, I love my inexplicably toned and tanned legs and still rock this $5 dress I snagged at the Chatuchak Market. 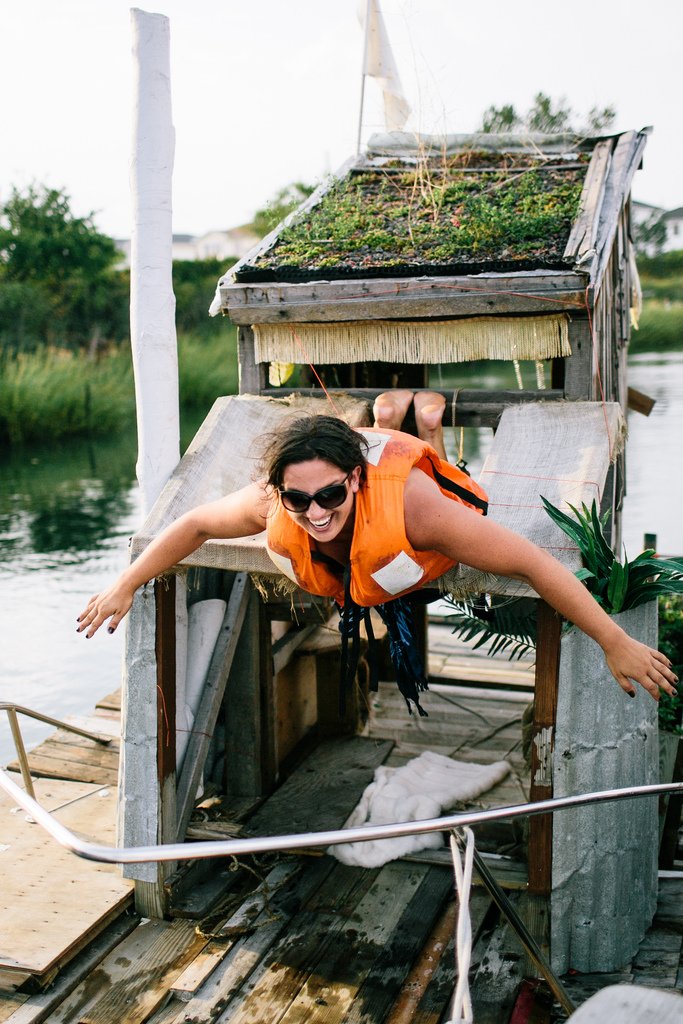 I have a knack for seeking out cool and/or offbeat happenings wherever I am, then convincing my friends to join me. I somehow caught wind of the former boat hotel (Boatel), a fleet of old boats artistically converted into sleep spaces and docked in the Rockaways of NYC, and booked a few of them for my friends and I over a summer weekend. Shenanigans ensued, as to be expected in a place like this. I distinctly remember us throwing on life jackets and taking ridiculous selfies, and then at some point apparently I felt the need to plank. As you do.

Tree hugging in the Redwoods – California, 2009 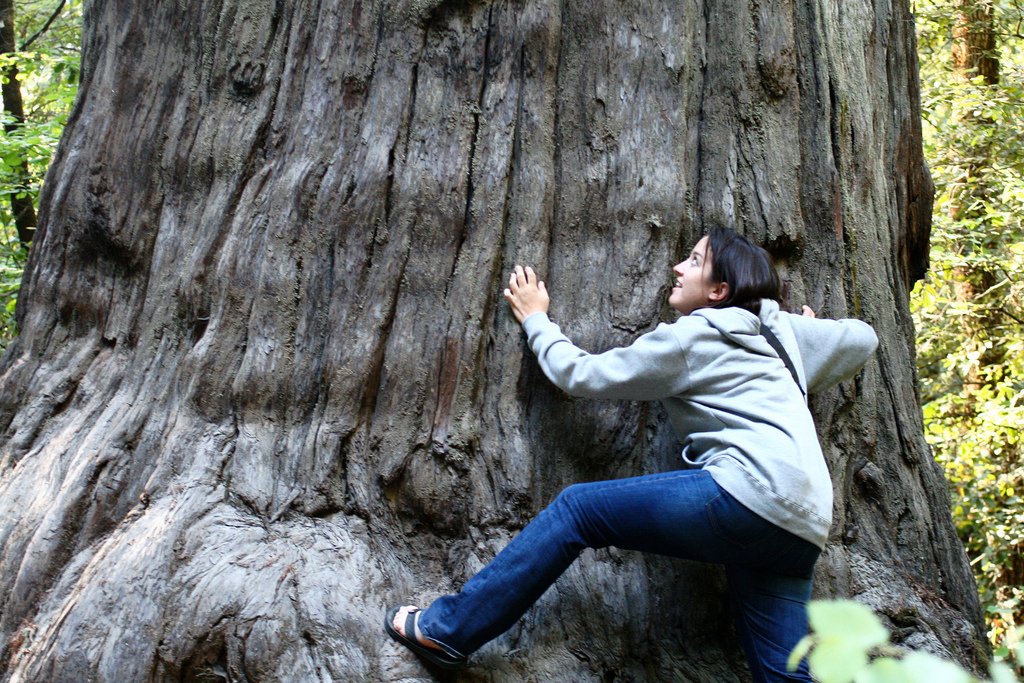 I don’t even remember this being taken, but I DO recall the scavenger hunt I embarked on a couple days prior in San Francisco in a search to find the Cal Berkeley hoodie that I’m rocking here. I can’t quite read the look on my face: is it wonder? Mischief? Delight? 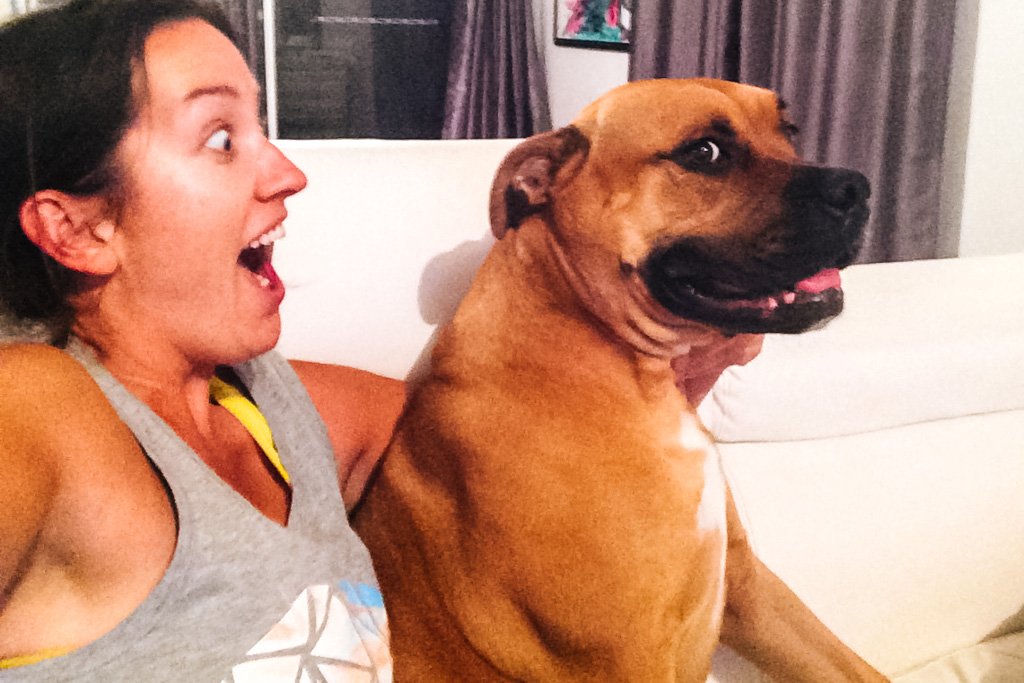 I’d wanted to grab a selfie of me and the dog I cared for at my first-ever house sit – you know, to show future house sitter seekers that I can hang with pets. Mid-cuddle with Luna, I pulled this face and immediately sent it to my sisters back home in the US. Knowing I’ve always been 100% a cat person (as have they), they replied with messages to the approximate tune of “what the actual flip are you doing?!” and “is that you… with a dog?”. Yes, yes it is. My feelings towards canines in general have evolved over the past year from *oh god get them away from me* to *aw well this one’s maybe a little bit cute*. Proud of myself! 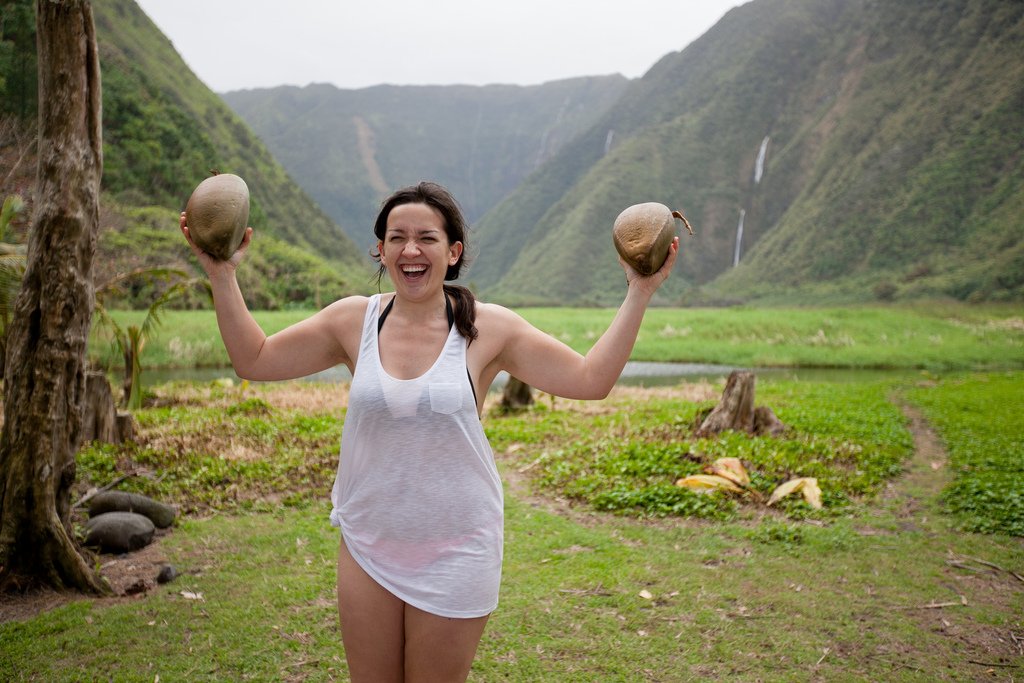 One of my fondest travel memories is trekking to Waimanu Valley and harvesting coconuts that we found scattered around our campsite. It doesn’t get much better than laying in a hammock overlooking a black sand beach, sipping fresh coconut water straight from the fruit. Yeah, I could have gone for the easy coconut boob shot, but I thought I’d try to be a little more creative (keyword: try). 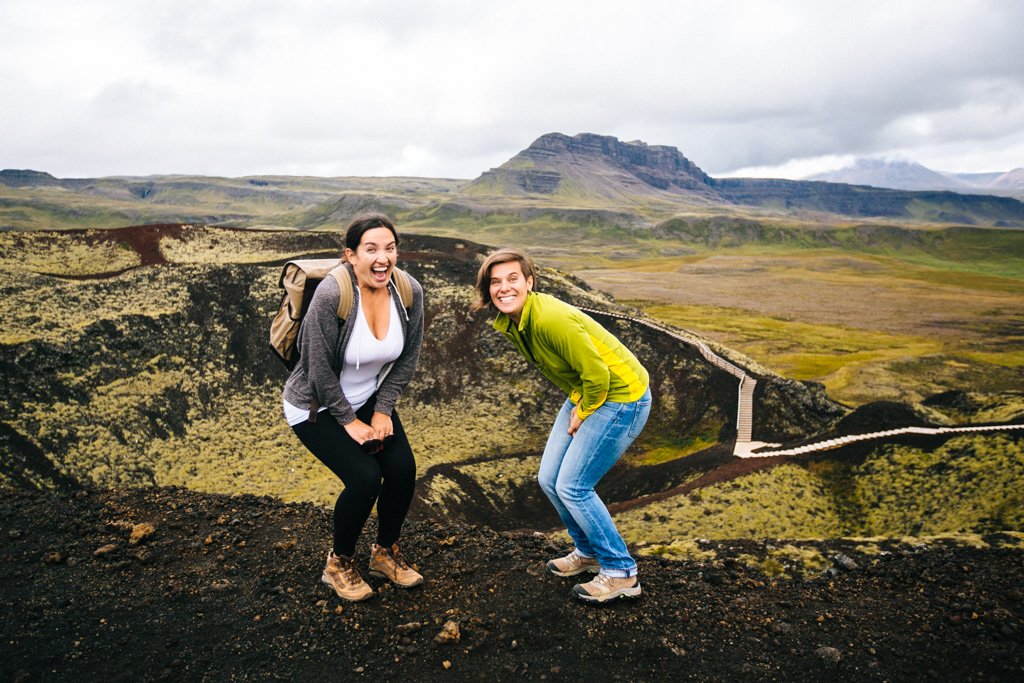 It definitely looks like we’re holding a pee here, but we really weren’t. I don’t know what we were thinking. It was Day 1 of our Iceland roadtrip, maybe we were just loopy and over-excited to be adventuring? Regardless, this photo makes me LOL. 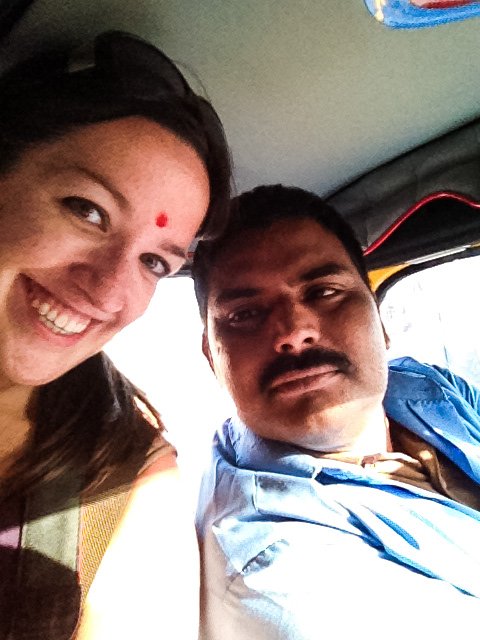 I’d completely forgotten about this shot until now. If memory serves, our rickshaw driver actually requested to pose with me while a friend snapped our picture. But seriously, how creepy is it that he’s got one eye on me and the other eye on the camera? 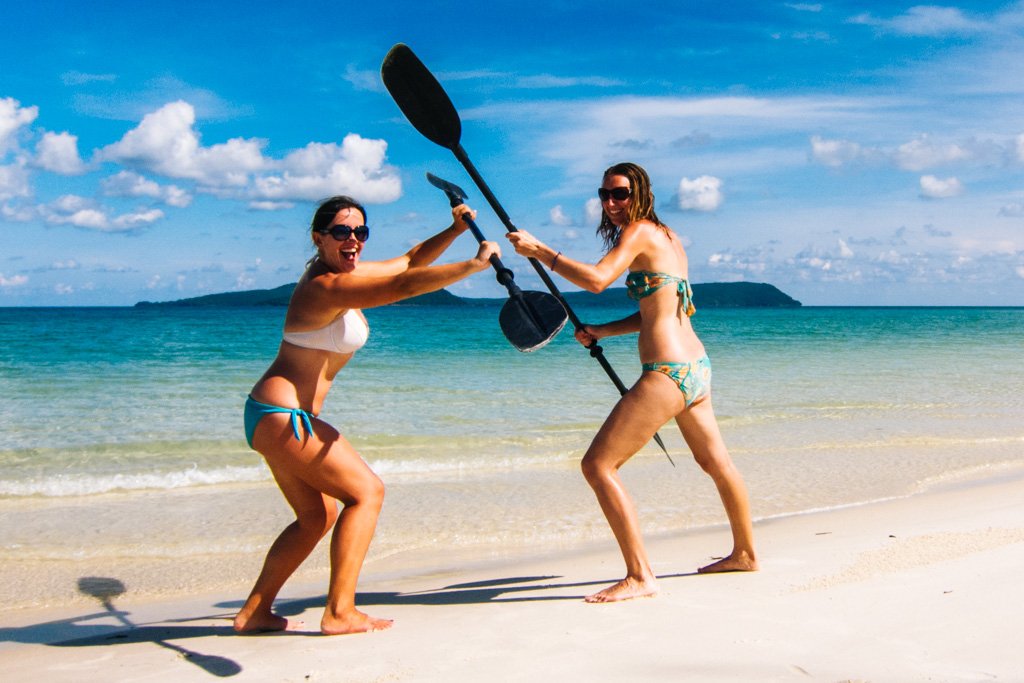 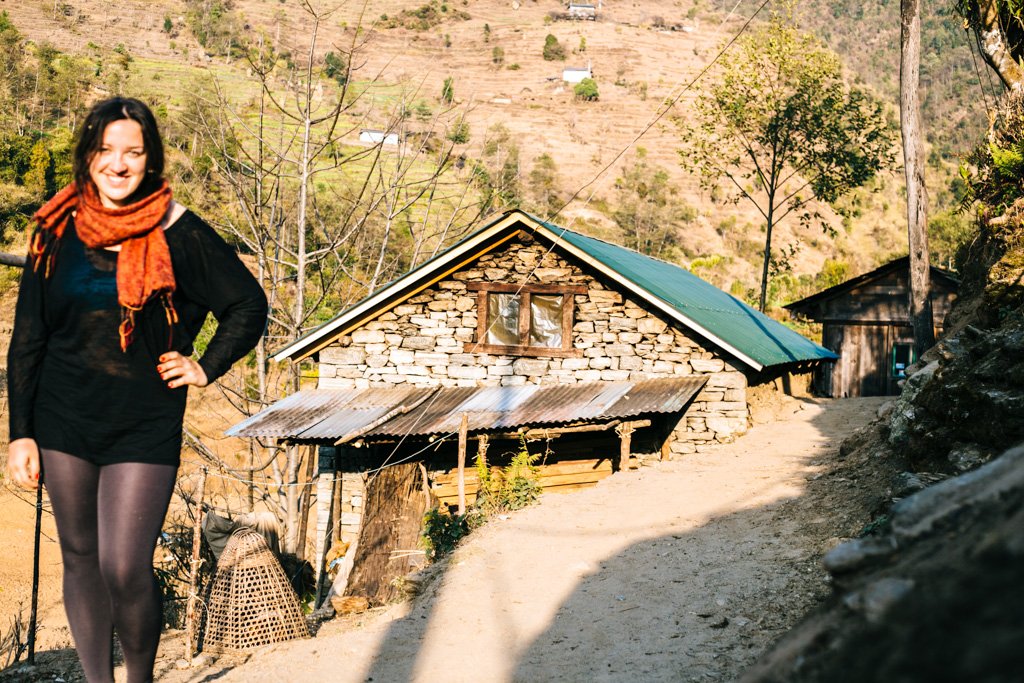 Oh gurl. A neon blue sports bra under a black see-through shirt paired with semi see-through, skin tight leggings? This outfit is questionable at best most anywhere in the world, but in Nepalese villages? Oh no no no. The second I inspected this out-of-focus selfie, I took myself straight back to the tea house and rectified my embarrassing fashion choice. 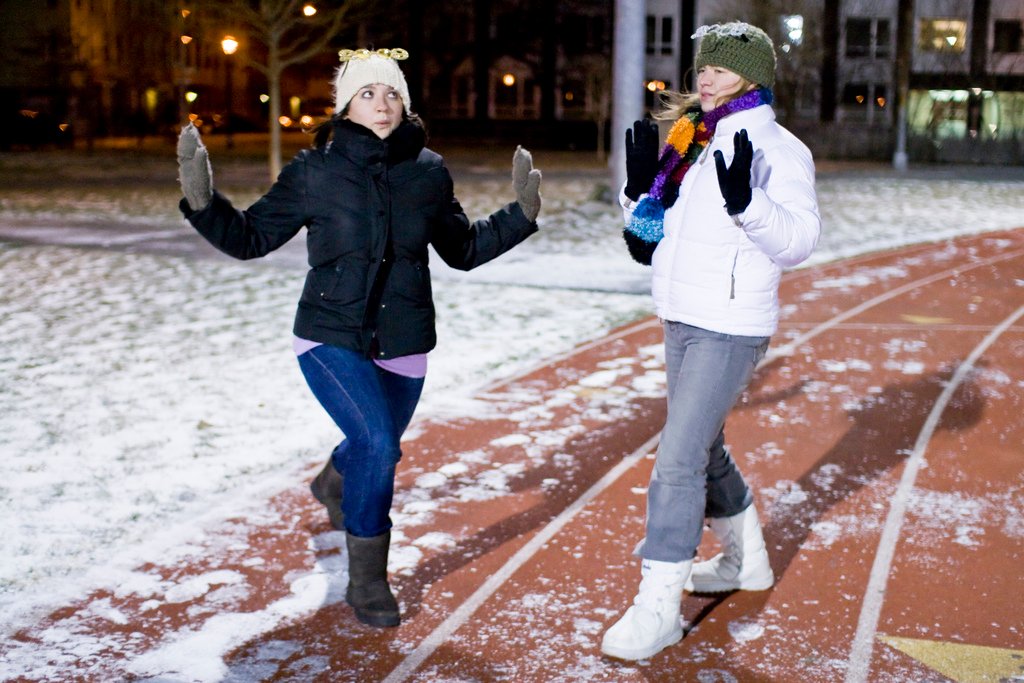 What do you like to do on New Years? 23-year-old me thought gallivanting around the neighborhood rocking Uggs and sparkly 2009 specs made for a jolly good time. I’ll also take credit for those moon boots Jill had on. (Hey, this blog aint called Stylish Frolicker, now is it?) 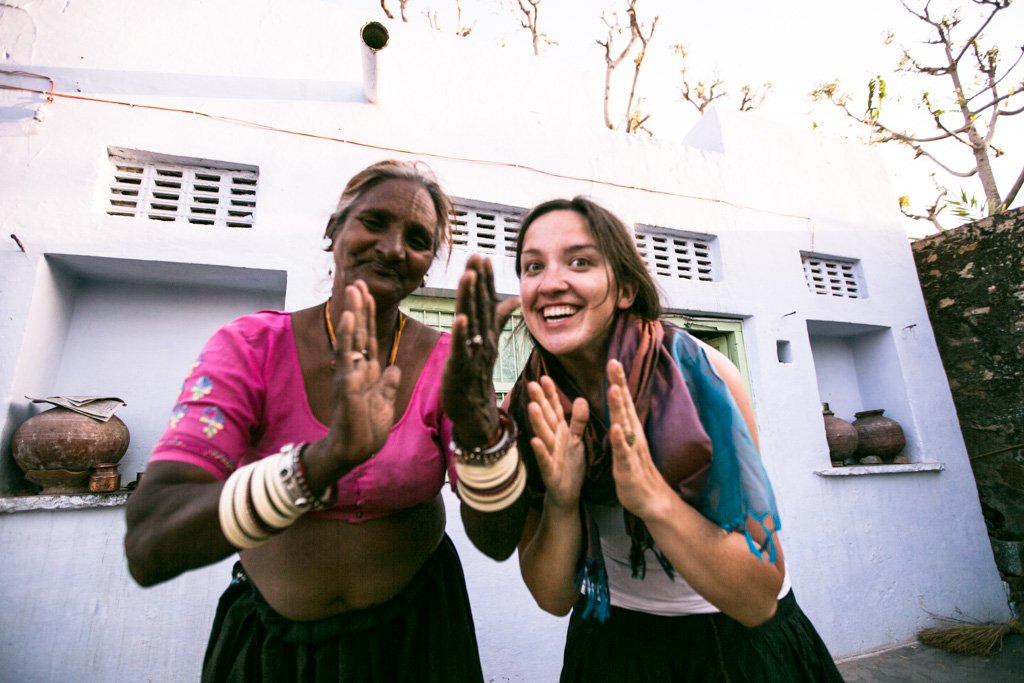 A spontaneous photoshoot with a family in Pushkar has gotta be one of my more absurd travel experiences. The mother got me to dance with her – and by dance, I mean clap my hands and flail my arms around. Instead of dwelling on the fact that they asked me for money at the end, I choose to remember it for the ridiculous time it was. 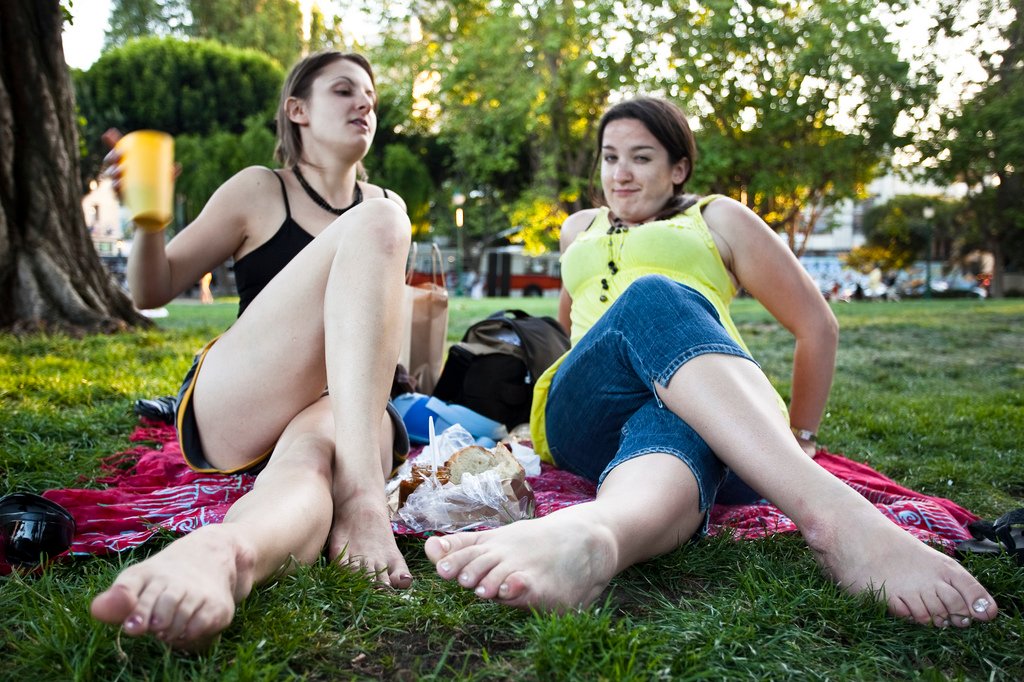 Understandably an outtake, this picture is just gross. We look like we’re about to vomit, our feet look disgusting – geez, why does this even still exist?! 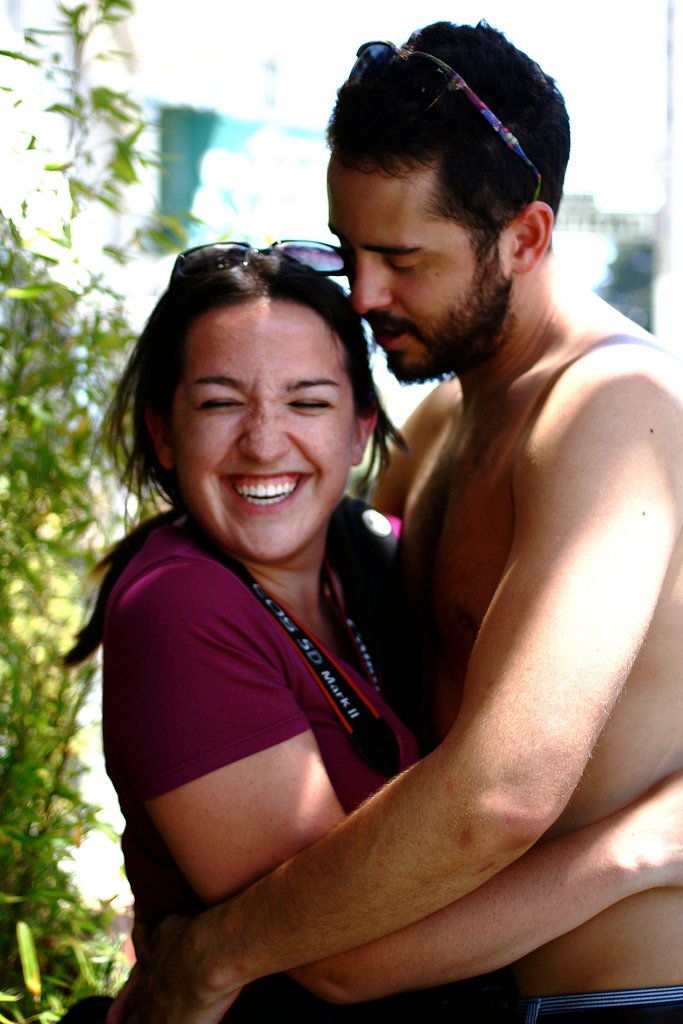 Our time in SF happened to coincide with the annual Bay to Breakers race, in which folks dress up in nutty costumes (or nothing at all) and run the streets of San Francisco. Not surprisingly, there’s also a fair bit of partying involved in the festivities. Poor innocent me got cornered by a reveler in the Haight who requested a hug. It was totes awk.

Hanging out in a rainbow-brite bathroom – Switzerland, 2008 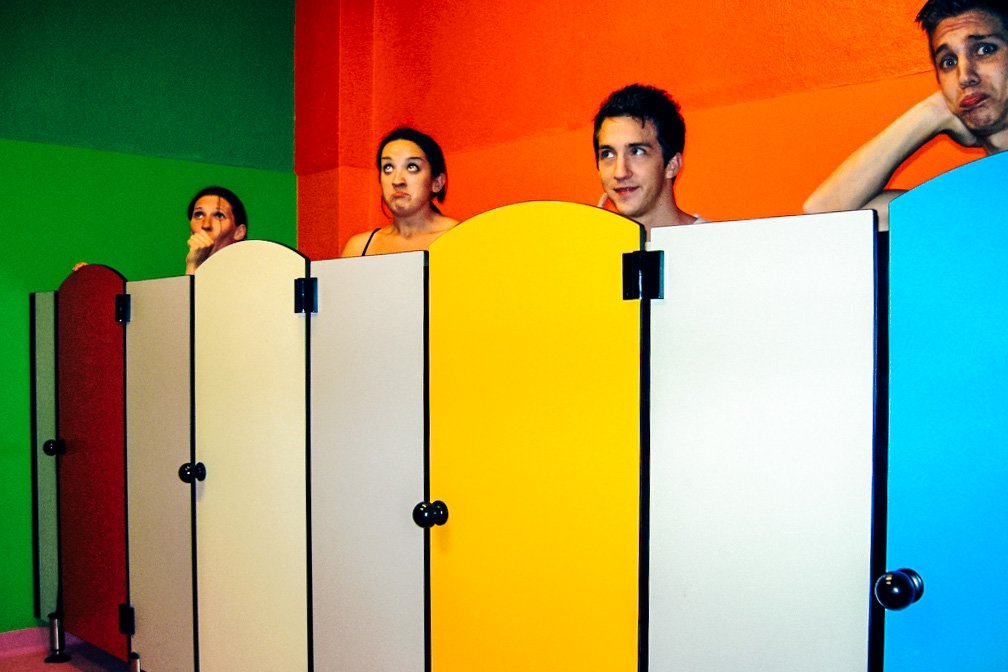 There are enough absurd photos from my 2008 trip to Switzerland to merit a dedicated post, but this one might be the funniest. I don’t remember where exactly we were, or who had the brilliant idea of posing in these toilet stalls, but I love that it happened. But why are the doors so short? Was this a kids bathroom? We’ll never know. 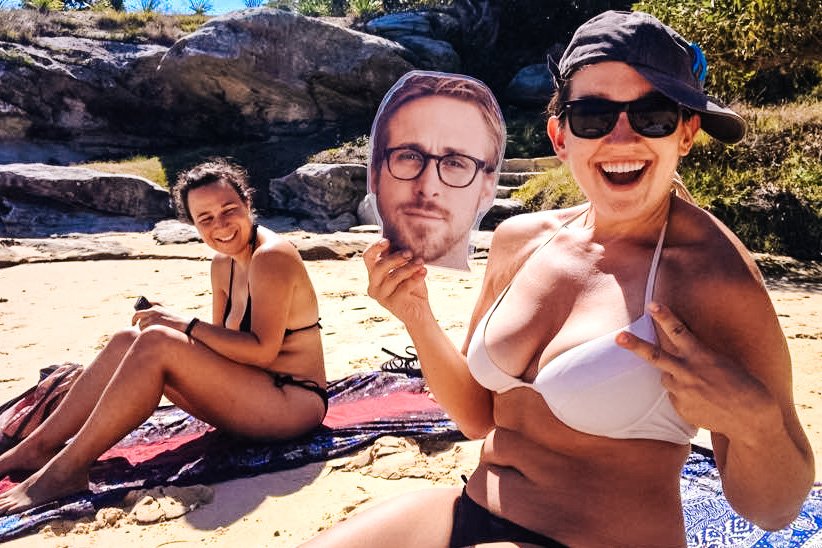 I have a blogger friend who travels the world with a cut out Ryan Gosling head. After admiring her Gos-filled instagram feed for months, we finally met up in Sydney earlier this year. She introduced me to the Gos, and I couldn’t resist taking a photo with the legend himself (itself?). 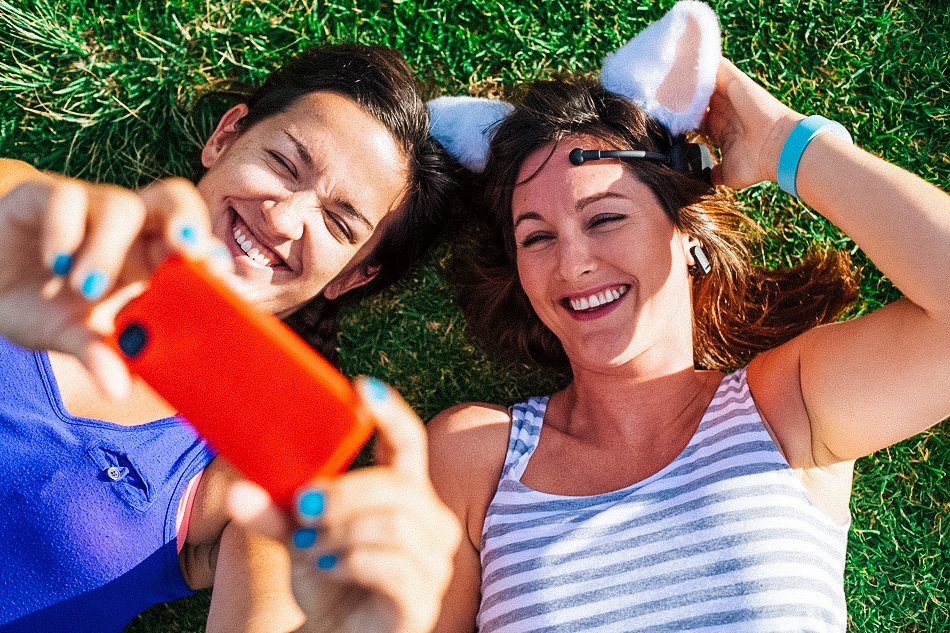 How about the time our HelpX host asked us to take pictures of ourselves on Bondi Beach wearing her new pairs of bunny ears? These things are supposed to detect whether your brainwaves are active or relaxed, but I’m not entirely convinced they work. Regardless, we had a ridiculous afternoon traipsing around Bondi in them. 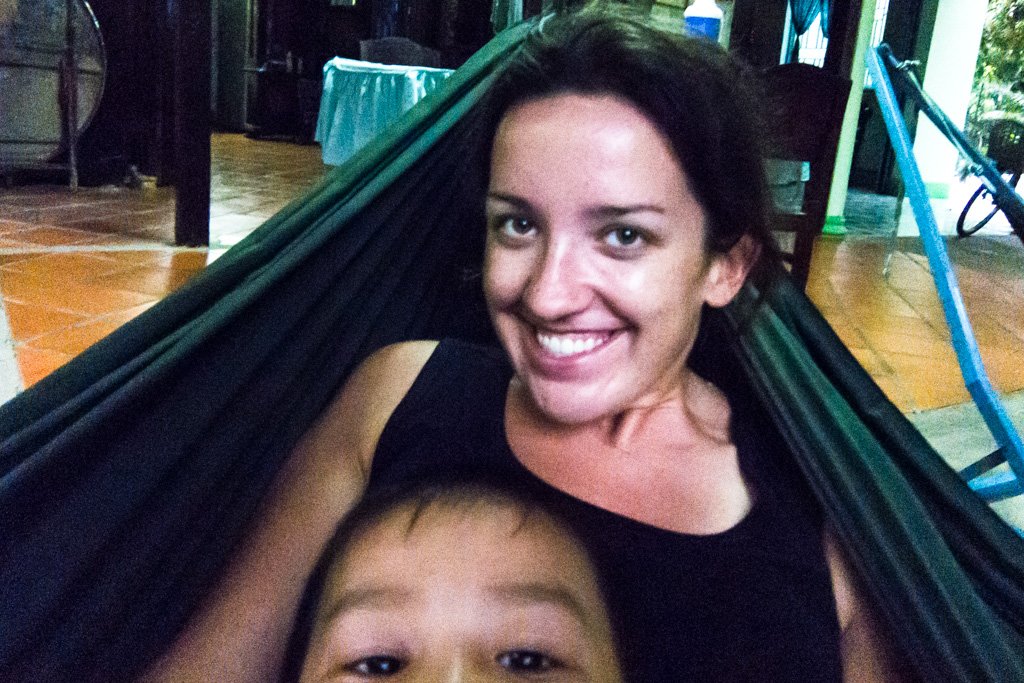 Hammock time is my precious relaxation time. I was none too pleased when the little boy at my Mekong Delta homestay took the liberty of climbing into the hammock while I was in it, immersed in a book. I’m not sure which is more awkward: me cuddling a dog, or me cuddling a kid (like I said: I’M A CAT LADY, ok??).

Getting a dress tailored in Hoi An – Vietnam, 2013 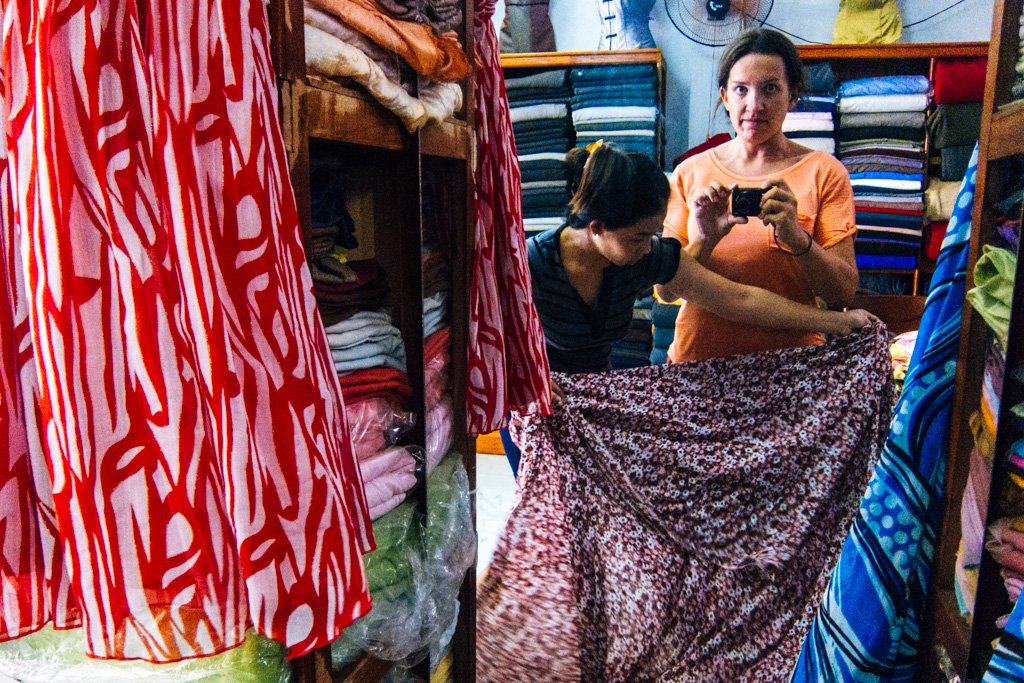 I never expected my first-ever tailoring experience to look like this, with me drenched in several layers of sweat and looking downright exasperated as the shopkeeper takes measurements. I actually wasn’t as miserable as I look here – I ended up buying one dress off the rack that fit perfectly, and a black skirt, making for an easy-breezy shopping spree. 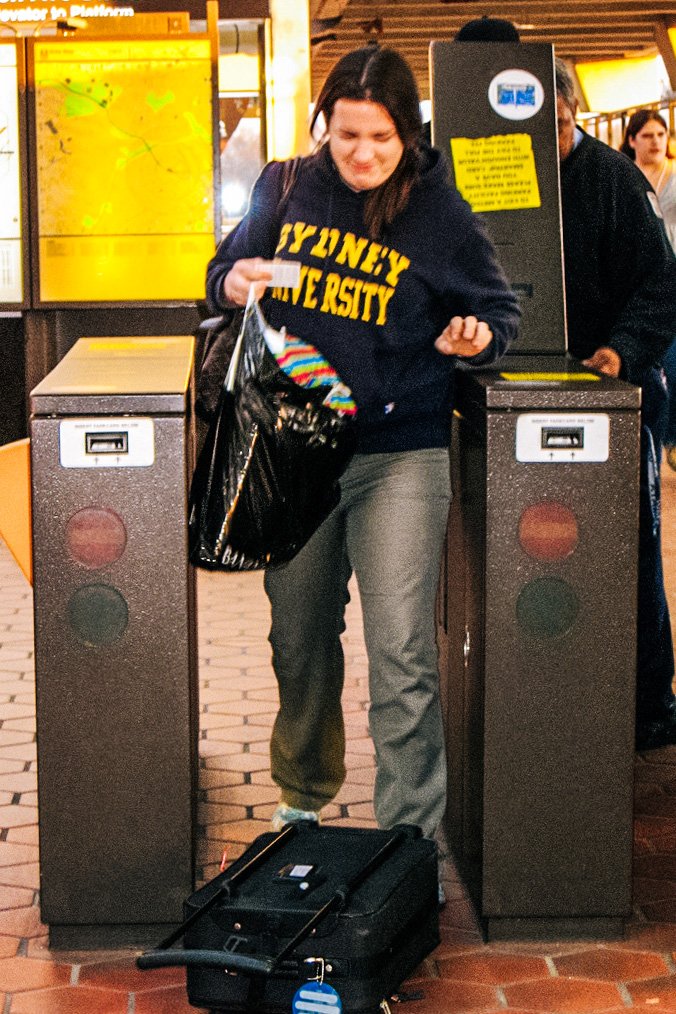 THAT FACE! I feel like this is the real life rendition of that zig-zag mouthed angry emoji, don’t ya think? And I WOULD drop my baggage while walking through a turnstile and be severely annoyed by it. 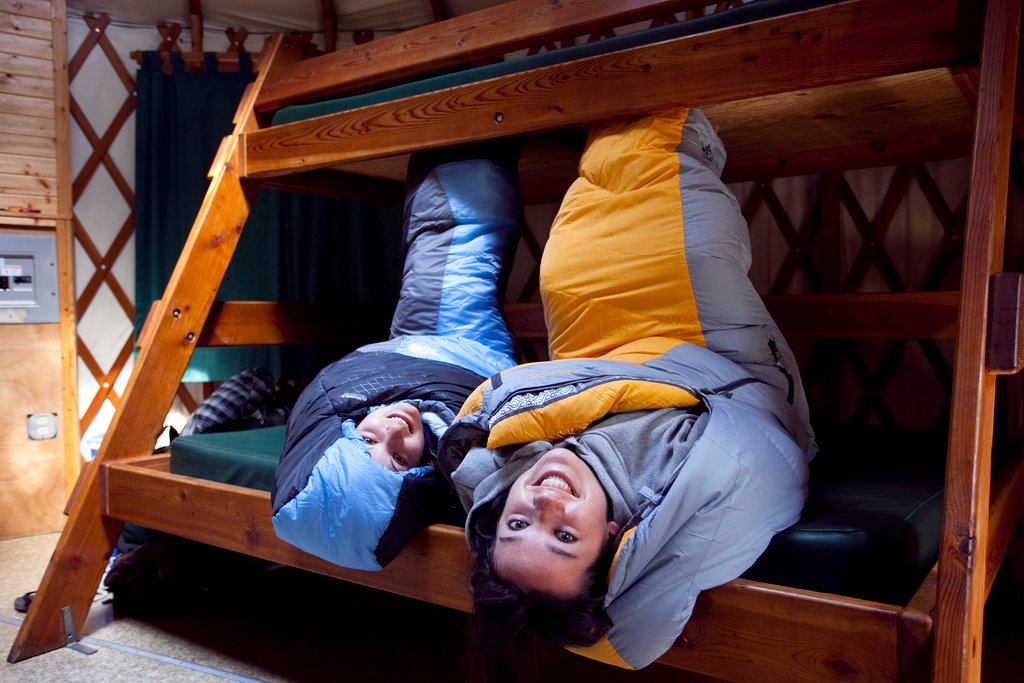 We had brand new sleeping bags and were staying in a YURT – I mean, what else were we supposed to do other than get in them, pose upside-down in our bunk, and take some goofy selfies? 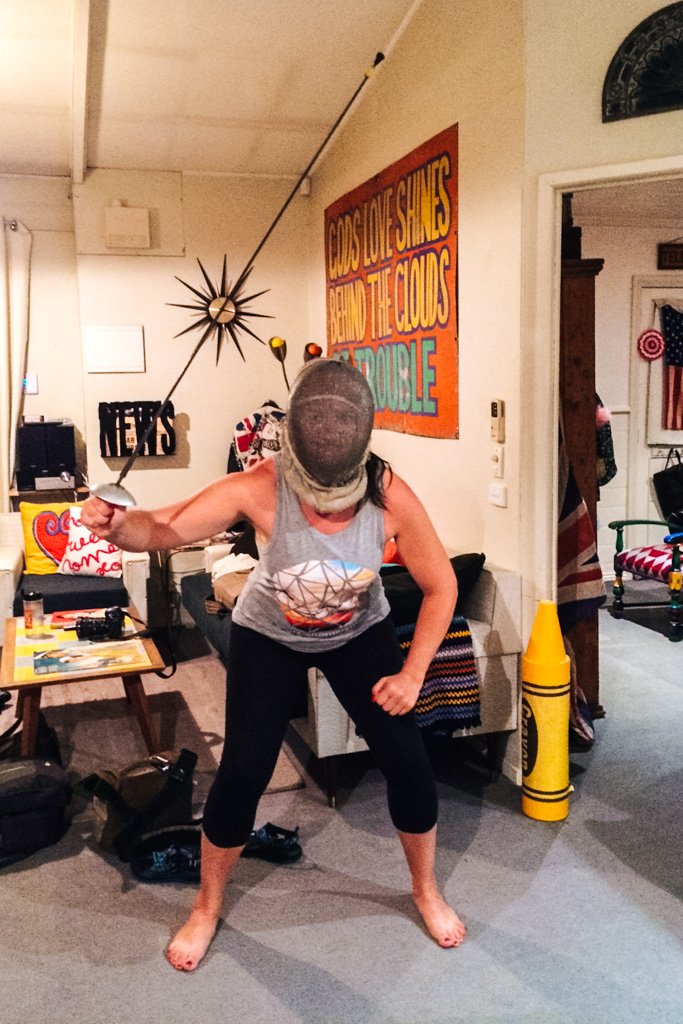 On a recent jaunt to the Mornington Peninsula, we stayed a night at the Hotel de Love, a kitschy airbnb studio apartment decked out in all sorts of flea market finds and equipped with various costumes and accessories. How do you NOT play with the fencing equipment, masks, hats, and clown suit that beckon? We sure couldn’t resist dressing up in the most absurd ensembles we could scrap together.

Tags: adventure travelMisadventuresselfiesolo travel
Previous ArticleLife After Oz: Where To Next?
Next Article Coffee Making Tips For The At Home Barista