By on Asia Misadventures Philippines

I’ve done enough traveling to know what works and what doesn’t for me, and you know what I’ve realized in recent years? The thing that causes me the most stress is getting from A to B. The more connections it involves, the more wound up I become. It’s one major reason why I’ve transitioned to a slow travel style, and THE reason why I’ve elected to base myself on one island per week during my month-long trip in the Philippines. I’d much rather spend my time enjoying one place and getting to know it more thoroughly than wasting half a day traveling between islands and stressing about it, you know?

Still, sometimes you can’t get around long-ass travel days. And when traveling around Southeast Asia or other third world countries, you have to go in expecting connections to take much longer than they should, buses not to leave on time, being overcharged, and having to wait til enough people show up before your transport will leave – among other annoyances.

I find it really helps me if I go in half-expecting everything to go wrong in some way. This helped get me through a particularly rough welcome to the Philippines last week which looked a little something like this: 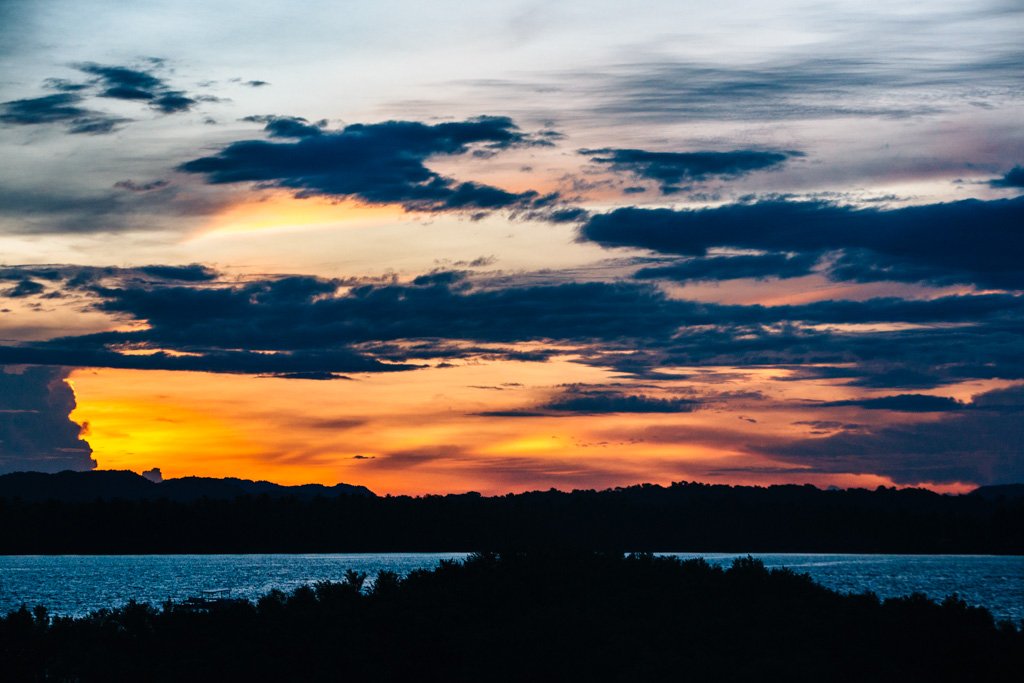 Just kidding, it actually looked nothing like this glorious sunset.

My journey began with an 8 hour flight from Sydney to Manila. Being assigned a middle seat on a no-frills budget airline objectively blows, but luckily I was able to snag the open aisle seat next to me and spent the time reading, writing, and dozing off to music. Who needs in-flight entertainment?

8 hours turned into 9 with a slight delay and then a weird little snafu upon landing. We were about to land, like literally 1-2 seconds from touching the ground, when the plane suddenly jerked upward and carried us away from the airport. For the next few minutes I frantically glanced around the plane, eyeing passengers equally as baffled as I was and flight attendants who looked unfazed. A few minutes later, they announced that we’d be attempting a different approach into Manila.

Well alright, sure, that’s perfectly normal *cough*. Our delay had my blood pressure rising because I had another connection to make that evening from Manila to Cebu. Missing that connection would mean forfeiting my hotel in Cebu for the night, booking a new one in Manila, enduring the extra airport schlep I’d been trying to avoid, and likely not getting to Maya in time the next day to make the last boat out to Malapascua island (therefore missing another booked hotel and having to pay for a new one elsewhere). HELLO STRESS PARTY. 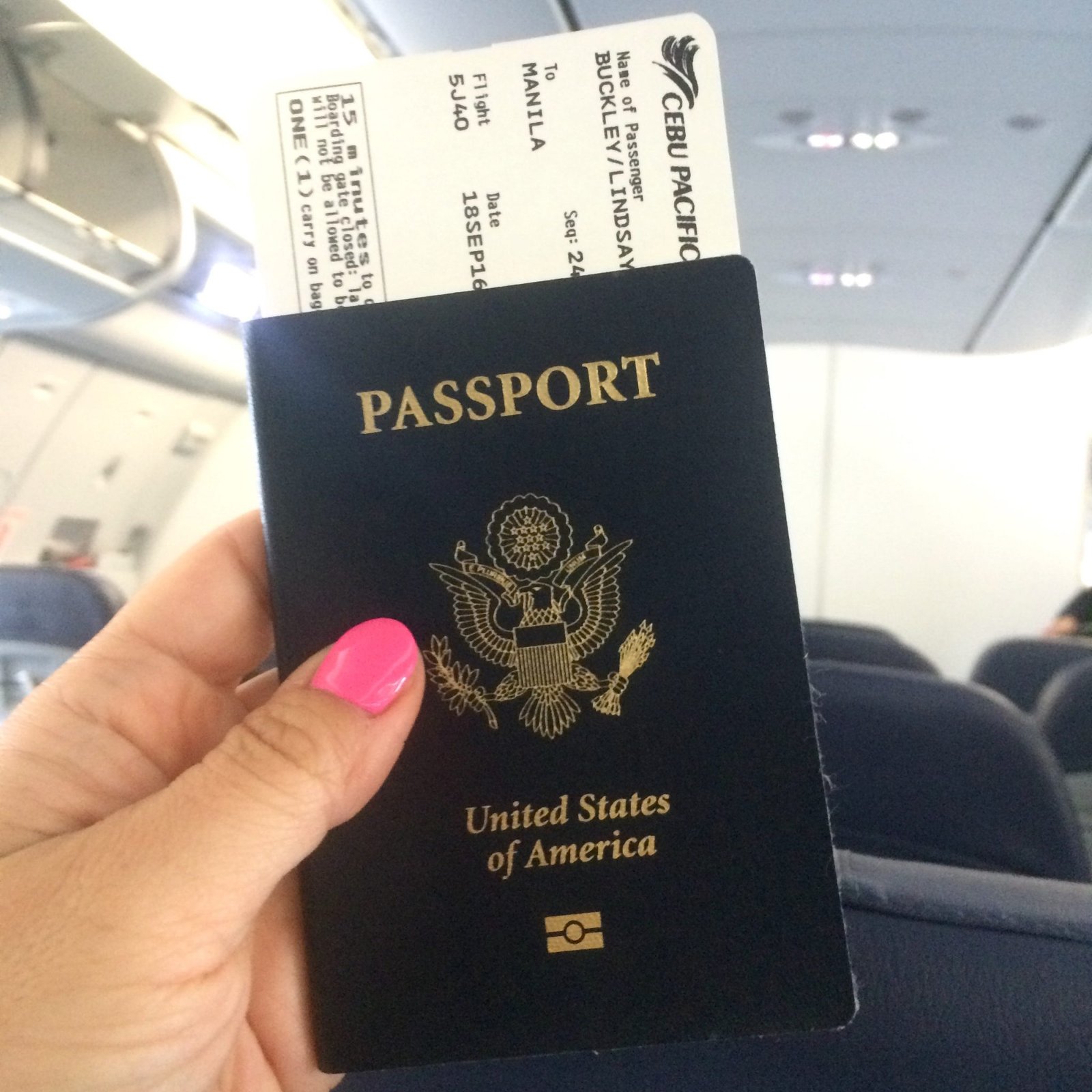 Hmm, not so sure about you, Cebu Pacific…

‘salright, I did good by allowing 3 hours between flights which meant I had enough time to make the second flight even with the delay. Whew!

Don’t worry though, once I arrived in Cebu I got thoroughly ripped off on a taxi to my hotel. I found out later that they charged me more than double what the normal price should have been. Note to self: ALWAYS go with a metered taxi!

My room at the Gran Tierra Suites in Cebu cost $20 and contained the flattest, least-cushioned bed I’ve ever slept on. I was exhausted enough to sleep at least half the night through, but it wasn’t great. 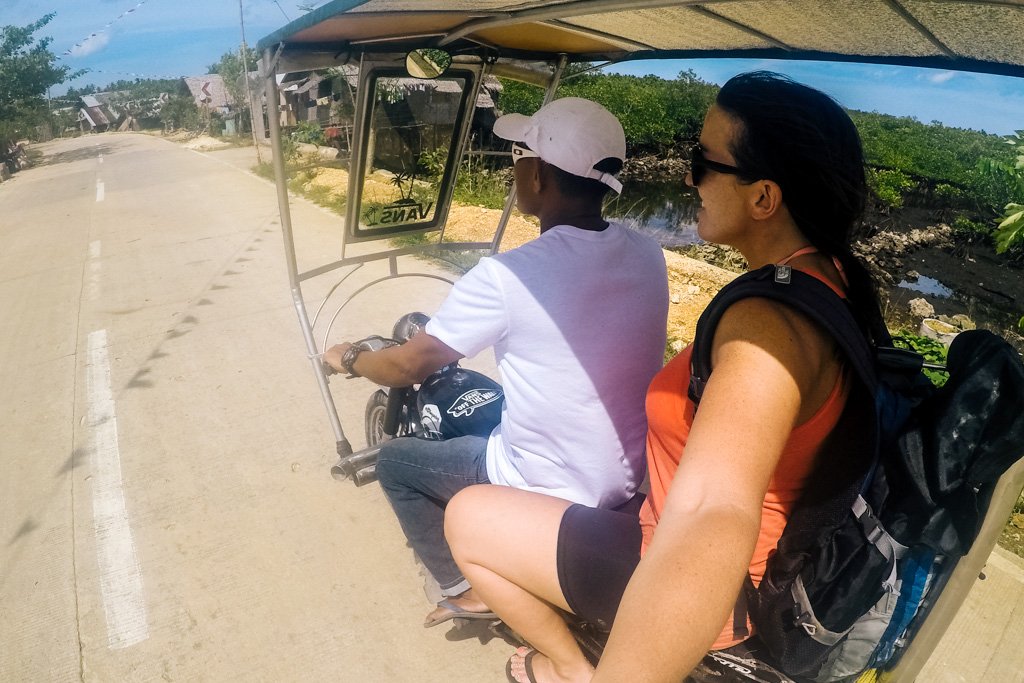 The next morning I ordered a Grab Taxi (Southeast Asia’s version of Uber) to take me to North Bus Station. I didn’t get ripped off this time, hooray!

However, I made the foolish decision to hop on the non-AC bus instead of the AC bus. Why would I do such a stupid thing? Because I’d heard the non-AC bus makes less stops for toilet and snack breaks, and this one was also leaving sooner which I thought would get me to the boat a little earlier.

Ha! Ha. Ha. Regardless of anything else, I should have thought to stick with the tourists. Tourists always take the air conditioned bus. Tourists on this route are nearly always going to Maya to catch the boat to Malapascua. If I stick with others going the same route, I’m guaranteed to get on a boat to the island today even if it means splitting a private boat between us after the last public boat has departed.

But what did I do instead? I subjected myself to a sweaty ride with locals heading anywhere BUT Malapascua, on a bus that stopped every few minutes to pick up new passengers. I’d snagged a coveted seat in the front of the bus to curb my sporadic motion sickness, but that plan backfired when I witnessed firsthand our bus running over a dog in the middle of the road. I wish I was kidding or exaggerating, but I definitely saw the dog cleaning itself in the street, then going under the bus, then yelping as we ran it over. And I seemed to be the only one remotely traumatized by this! 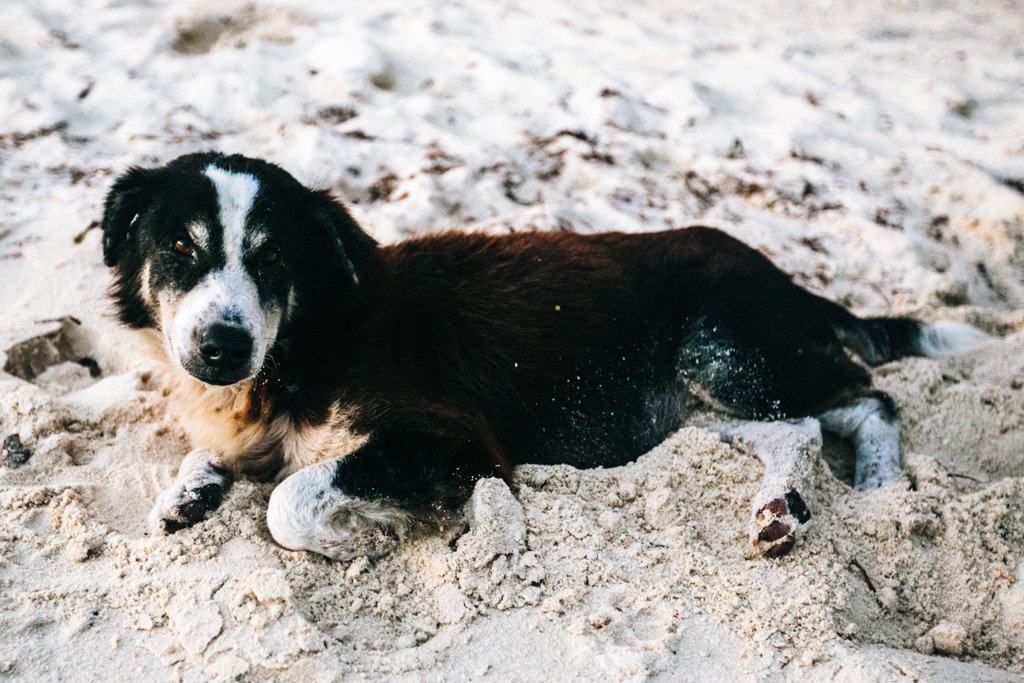 Not the dog we ran over, but one of many dogs I’ve seen in this country.

Fellow solo travelers, you’ll feel me on this one: isn’t it the worst when you have all your luggage on you and you need to pee? I’ve long since mastered the schlep to the airport bathroom with cumbersome carry-on bags, but it’s a different game entirely when both you and all your stuff is on a crowded bus traversing some foreign land, and the bus stops for a toilet break for an indeterminate amount of time. Would I have time to relieve my bladder, buy a snack, and replenish my water? Should I risk leaving my 11kg camera bag under my seat, or lug the damn thing with me and risk losing my coveted front seat? This would all be a non-issue if I were traveling with someone who could watch my bag and make sure the driver doesn’t take off without me, but on my own it becomes a stress trigger that I don’t particularly want to deal with. So I didn’t, and I sat on the bus for 5 hours with my bags, holding my bladder, nursing a mild headache from dehydration. 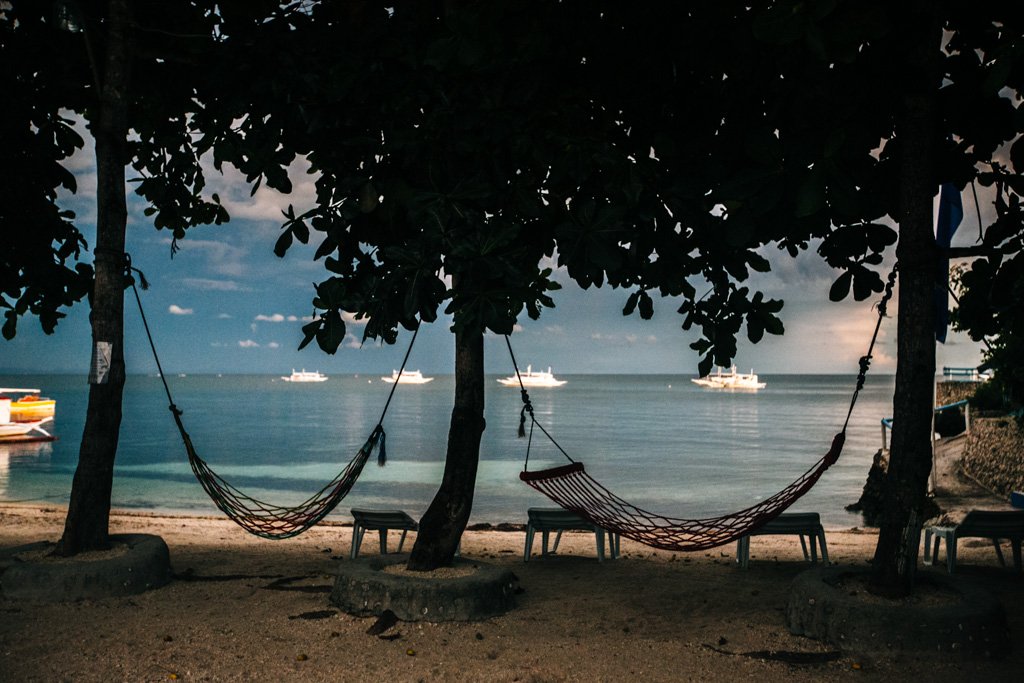 Doing it all for the beach hammocks!

I was the last one to get off the bus, at the last stop on the route in Maya. I bought my boat ticket to Malapascua and beelined for the nearest vendor selling water and snacks. Then I headed down to the waterfront where I spotted a boat full of people who I presumed were all the tourists from the AC bus that beat us to Maya. I figured I’d just join them and we’d all be on our merry way to Malapascua, but the local boat people (for lack of a better term) escorted me to the waiting area to wait for the next boat which they insisted would leave in a half hour.

As we approached the 4pm last-boat cutoff and no one else joined me waiting, I realized that I was probably going to get scammed into paying out the ass to get to Malapascua today instead of waiting til morning when more passengers would show up. The way boats (and sometimes buses) work in the Philippines is they wait until a certain number of people are on board before they decide it’s worth making the trip – and if you don’t want to wait, you can agree to pay a bit more to leave sooner.

I knew this was a common occurrence in the Philippines, and specifically that the going scam here is to get tourists to pay more to leave sooner, only to have a bunch of locals jump onboard without paying. But to take advantage of a single girl like this? I mean, I totally could have joined the last boat – it stayed anchored for at least 5 minutes while I was in the waiting area. They had to have known that if they kept me off the boat, I’d pay more to leave on the next boat which of course wouldn’t be anywhere near full since it was late in the day. I should have insisted on taking the earlier one!

So instead of paying 100 pesos for the normal boat, I paid 800 for my own private boat to Malapascua. That’s still under $20, which is not totally terrible. And since I was half-expecting to get scammed anyway, all I could do was bow my head and say, well played. I totally called them out on scamming me, but they kept playing it off saying there was “no time” with the other boat, which is obviously bullshit. I could have protested, argued, refused to pay – but (and here’s a fun little fact about me) I really hate making a fuss over things. I’m by no means a pushover, I just pick my battles very carefully and pride myself on calmly making do with whatever situation is thrust upon me. Making a stink over an extra $14 in this scenario felt both silly and futile to me, so I refrained. 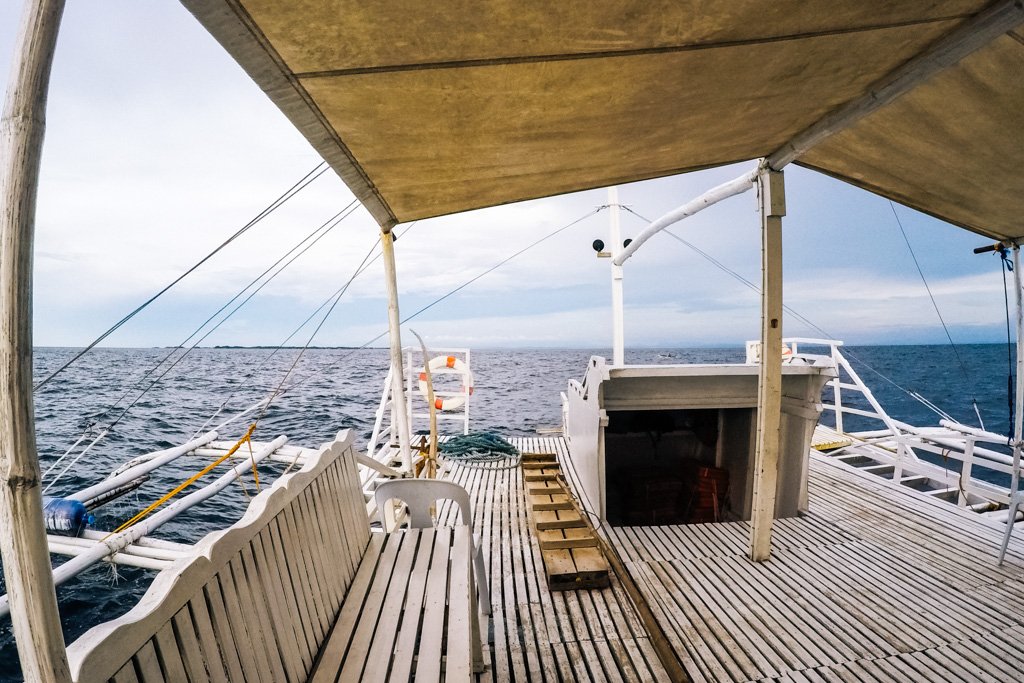 Bangka boat for one.

Fresh off my private boat, I set foot on Malapascua feeling so incredibly relieved to have finally made it that I actually let some guy carry my cumbersome backpack all the way to the resort knowing full well he could charge whatever he felt like (which ended up being only 100 pesos / $2, thankfully). I wasn’t in the mood to play my usual *Stubbornly Try To Find Your Way Without Asking For Help* game, and that turned out to be a good thing because the boat let me off somewhere different than the usual spot which I’d had mapped out in my notes.

AND THEN I MADE IT TO EVOLUTION DIVING RESORT AND HAD THE BEST TIME EVER! (Stay tuned for more on Malapascua in future posts!)