After a frustrating, exhausting, and hassle-fraught voyage to and through the Philippines, I finally landed on the doorstep of Evolution Diving Resort. Little did I know that the trying journey was more than worth it, because I had the most glorious 5 days on Malapascua Island. Ever have one of those trips so perfect that you wouldn’t change a single thing about it? That was Malapascua for me. 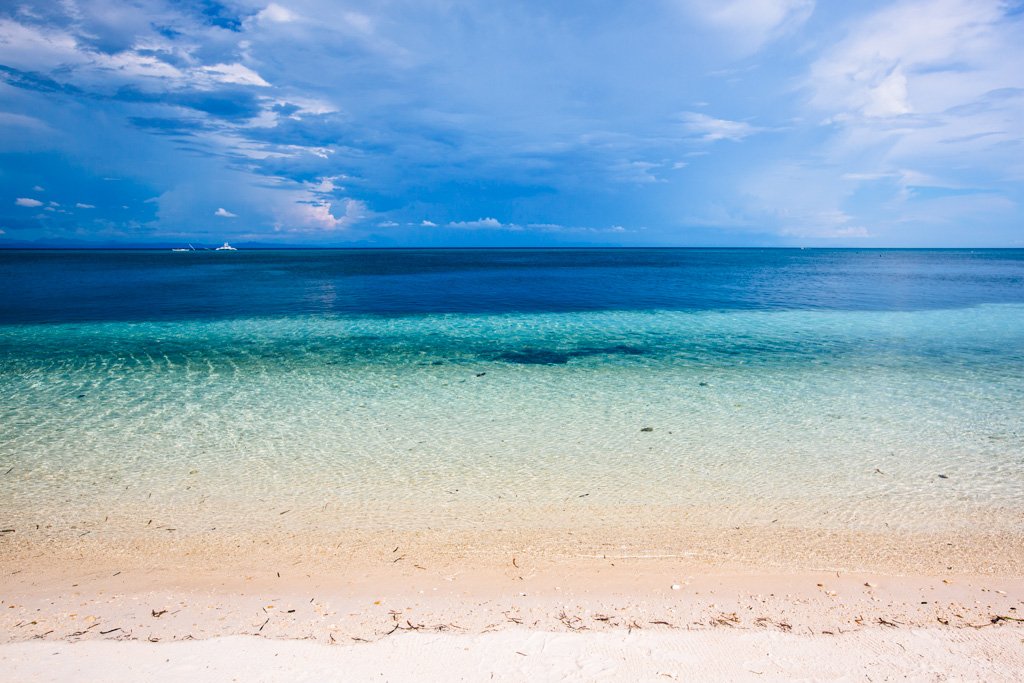 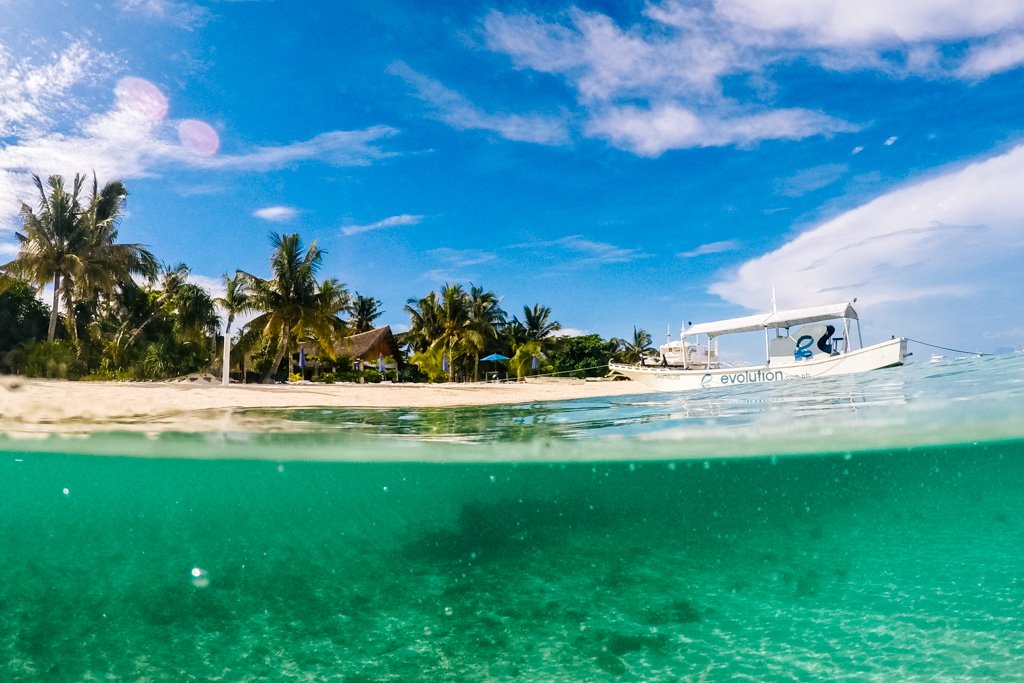 Malapascua is a tiny island just north of the island of Cebu and about a 5 hour drive from Cebu city. Diving is the thing to do here, specifically with thresher sharks. There’s a beachfront cluster of resorts offering restaurant fare and dive trips, and a local village set inland just behind them. Nightlife is pretty much nonexistent on Malapascua, which makes it blissfully quiet in the evenings.

In other words, you come to Malapascua to dive, maybe hang out on the beach between dives with some happy hour drinks, and sleep well. For this active, beach-loving, non-partying girl, it was basically paradise. 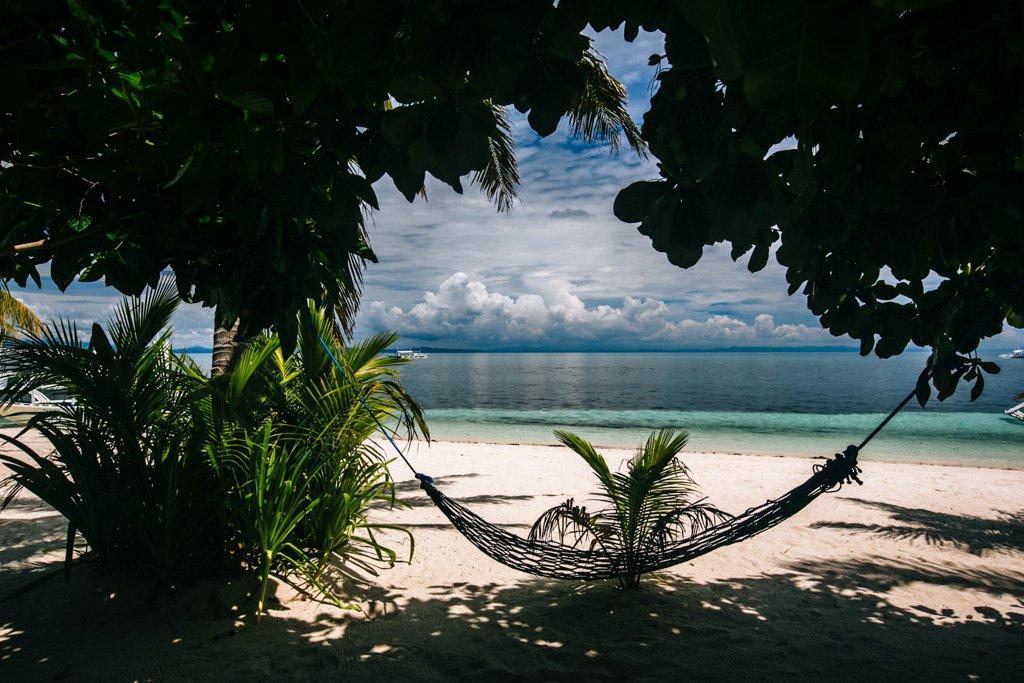 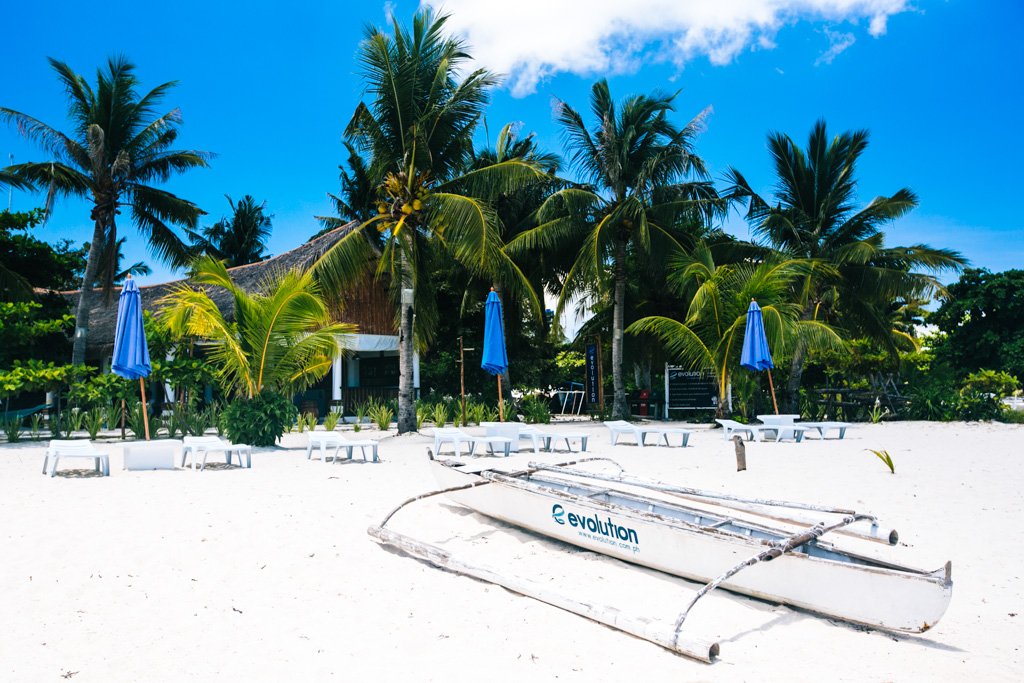 After getting my first taste of diving on Koh Tao a few months ago, I was eager to take it to the next level with the Advanced Open Water diving course at Evolution Diving. Nick from New Zealand was my instructor and an absolute LEGEND. In addition to being super knowledgeable and making me feel safe underwater (which should always be a given for any dive instructor), he went above and beyond by taking photos and videos for me without my even asking, lending me his own underwater camera and mask, and happily answering every single one of my (many) questions about the creatures we saw on each dive. Mostly it felt like I was hanging out with a friend for 3 days instead of attending class, which made it such a fun experience.

Safety stop selfie. Yep, that’s me with what looks like a crew cut!

This Advanced Open Water course was almost nothing like the Open Water course I took. There weren’t any videos to watch or tests to take; hell, there weren’t even any other students in it aside from me! Each day, Nick and I would sit down on one of the couches outside for a “briefing”, where we would go over my homework and any essential info needed for the dives we’d be doing. We had no class schedule, either: we’d decide either the night before or even the morning of which dives I was doing and then plan our briefings around them. As a commitment-phobe, I really appreciated having this flexibility and freedom!

The course calls for 5 dives: PADI requires the Deep dive (30m) and the Underwater Navigation dive, and the other 3 you’re free to choose for yourself. Evolution specializes in the Peak Performance Buoyancy dive, so they really encourage students to choose that as one of the 3. In my opinion, it’s probably THE most important dive for those who haven’t done enough dives to master buoyancy yet (which is most AOW students). Knowing my tendency to flail my arms around to quickly keep from bumping into reef, the buoyancy dive was a no-brainer. I also elected to do the Night dive and the photography dive (which we made into a hybrid Photo/Fish Identification dive). 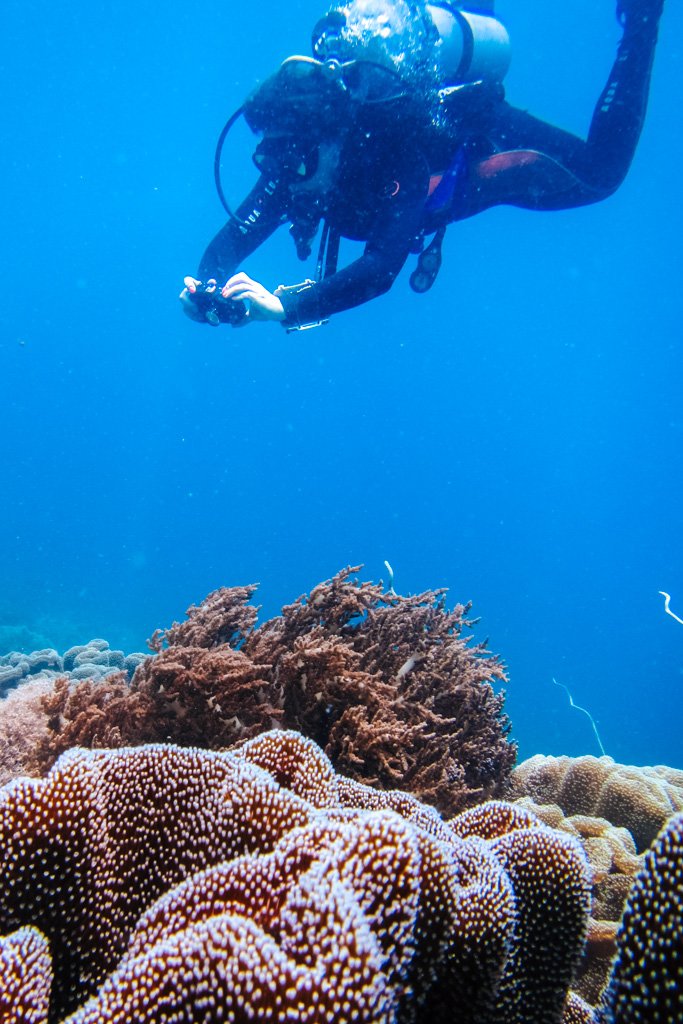 Check out my trim, y’all!

I was really happy with the buoyancy dive, which we wasted no time knocking out on Day 1. Nick drilled into me the importance of “proper trim” – i.e. the ideal positioning of your body in the water, with knees bent at a 90-degree angle and torso horizontal and parallel to the ocean floor. It’s much easier to maintain neutral buoyancy and avoid kicking the reef while you’re in this position.

I also learned how to use my breath more to move my body up and down rather than paddling with my arms, though admittedly I still frantically paddle if I’m getting dangerously close to touching something! 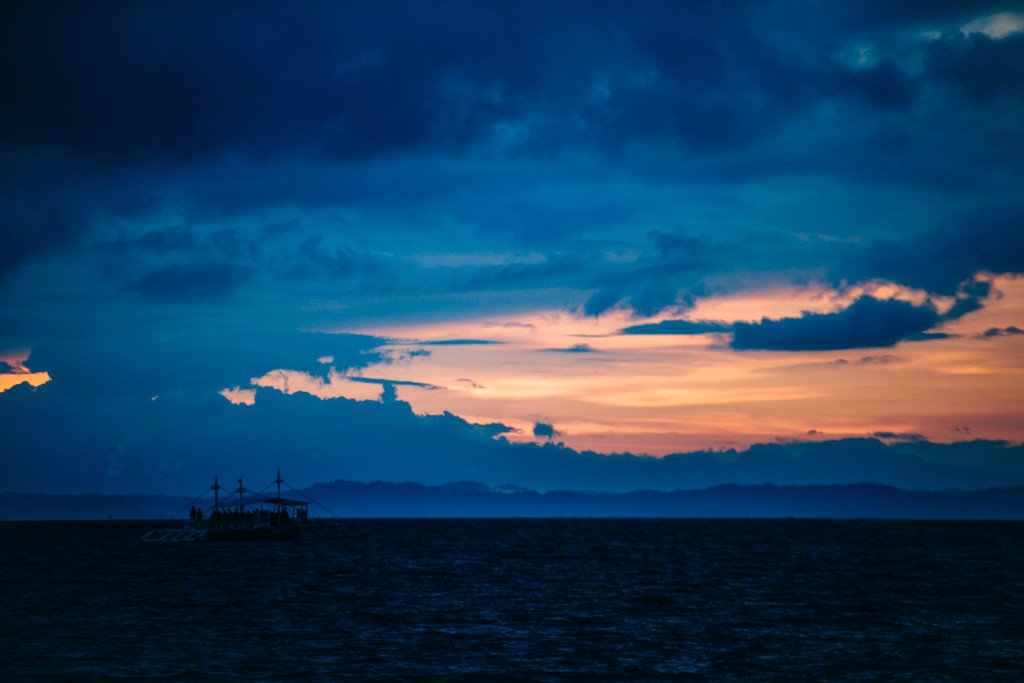 Sunrise from the dive boat. 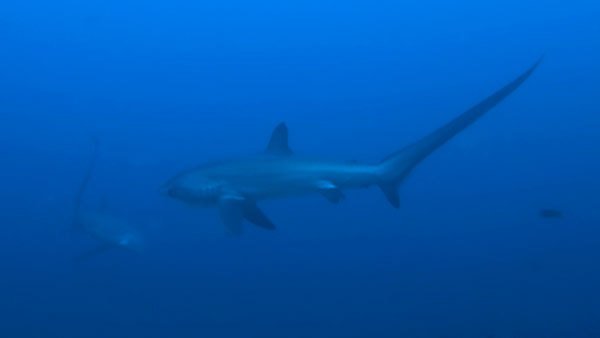 There are very few things I’m willing to wake up this early for (#NOTAMORNINGPERSON), but I felt like diving with thresher sharks was well worth the absurdly early wake-up call. This deep dive felt more like a fun dive because all we did was dive down to 30m, then come back up a bit to watch the sharks – no skills practice needed. At Monad Shoal, there are a few “cleaning stations” where the thresher sharks tend to circle around in early morning as fish eat the dead skin and bacteria off their bodies. The cleaning station we stopped at had a rope set up for divers to perch on while watching the threshers.

I’ll never forget the moment I glimpsed my first thresher shark, in part because Nick captured it on video for me. It didn’t come too close to us, but we could still clearly see it circling around. These guys grow to be 5-6m long and about half their length is their tail, how nuts is that? Such cool-looking creatures. 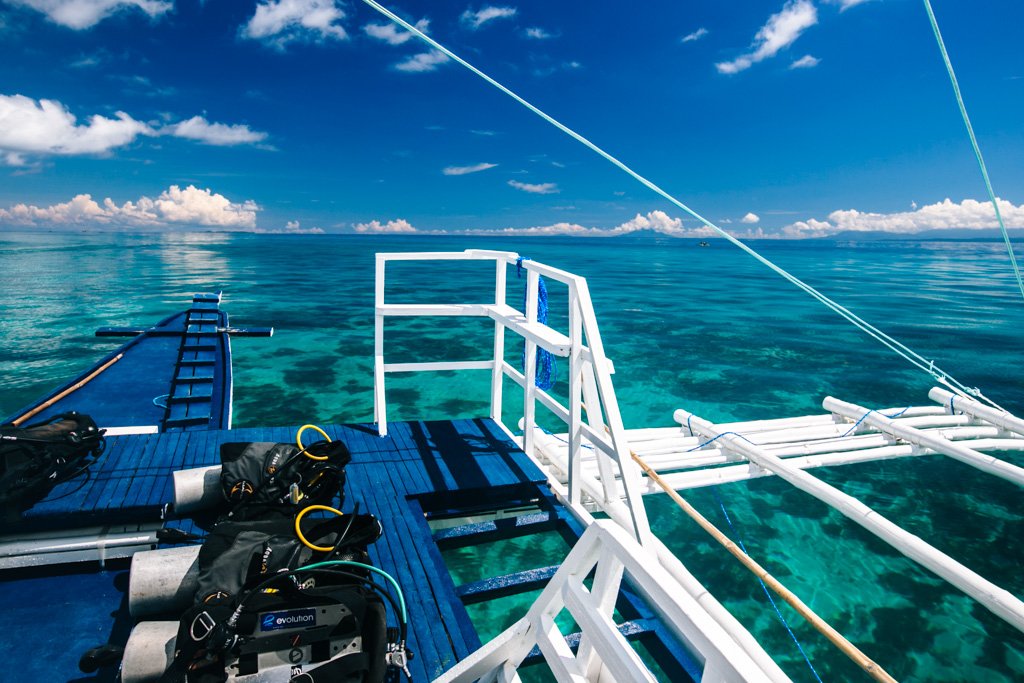 The bluest sea I ever did see.

Later that day we did two dives at another site. I fumbled my way through the underwater navigation dive where I attempted to use a compass and kept miscounting my kicks, and battled a leaking mask and some issue with my weights on the night dive.

We actually saw some really cool creatures on the night dive that you can’t see during the day, namely all sorts of crabs. I got a kick out of the boxer crab scurrying around with his arms up in the shape of a W, and the sponge crab with this big-ass yellow sponge on his back. Unfortunately no photos because, duh, it was dark and we didn’t have the necessary gear for night photography. 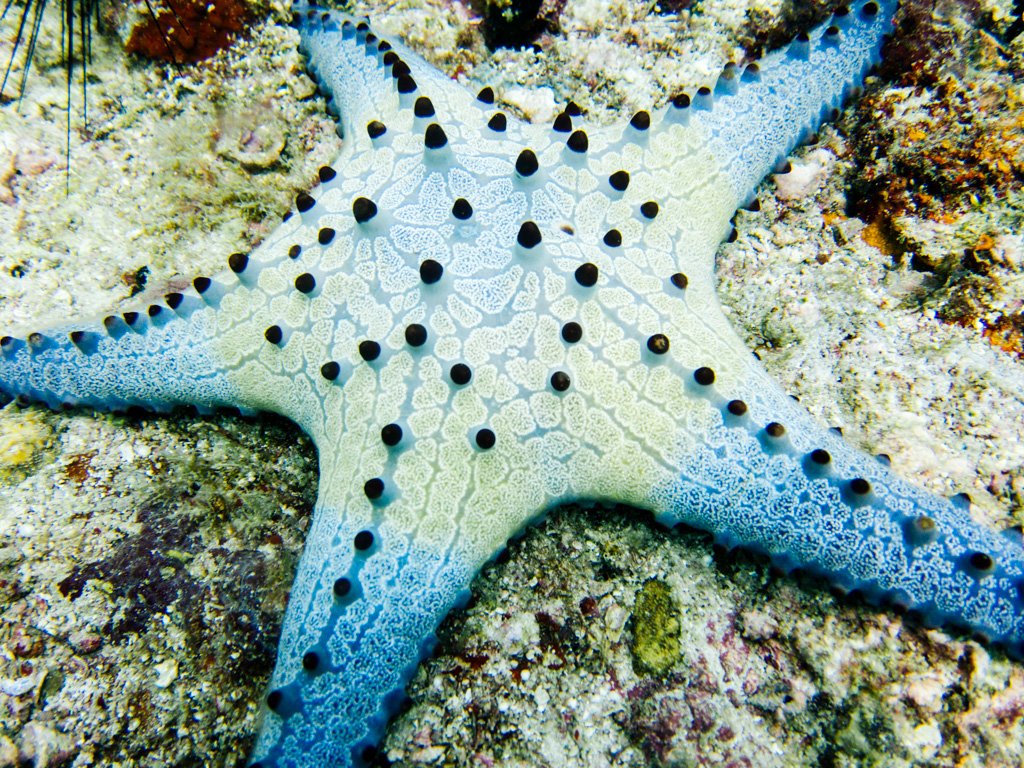 I wrapped up my course on Day 3 with the fish identification/photography dive. We headed out to a dive site known for its awesome reef and ample photo ops and it was SO GOOD. I’ve never seen such a colorful reef in my life, not even in the Great Barrier Reef. I swapped out my GoPro for a compact camera with underwater housing and manual controls and went snap-happy the entire dive.

Like I’ve said before, underwater photography is particularly challenging when you’re a newbie diver who’s not super great at buoyancy and therefore can’t stay still enough to take a sharp photo. I also find it tricky to judge how close I am to the reef, which results in me not getting as close as I could to take a better shot. I ended up with one photo I’m super proud of though, so I’m calling it a success! 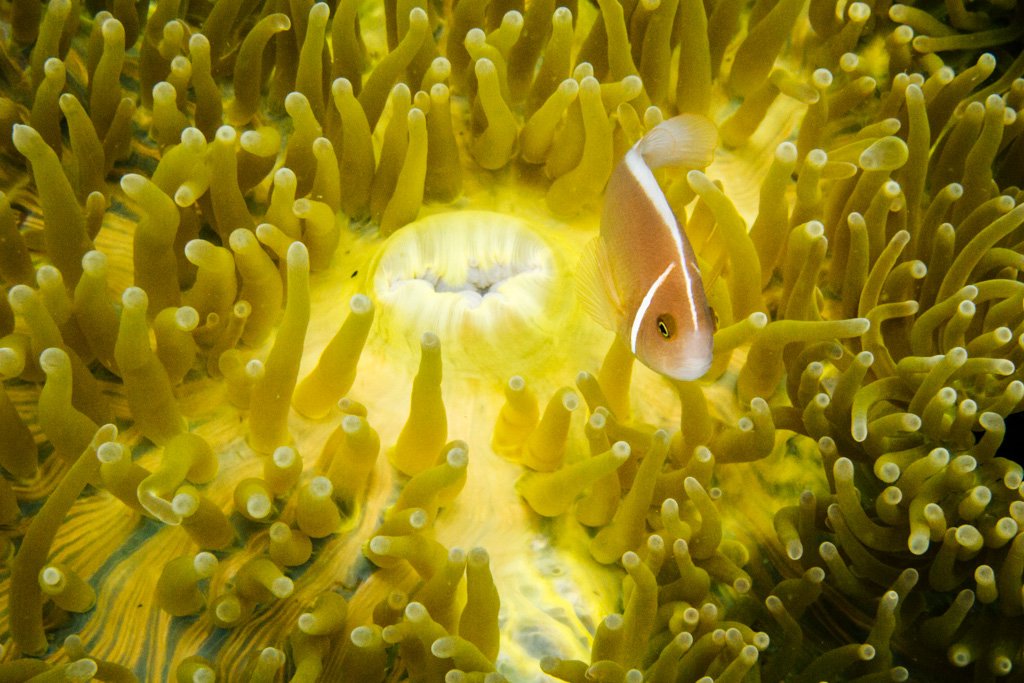 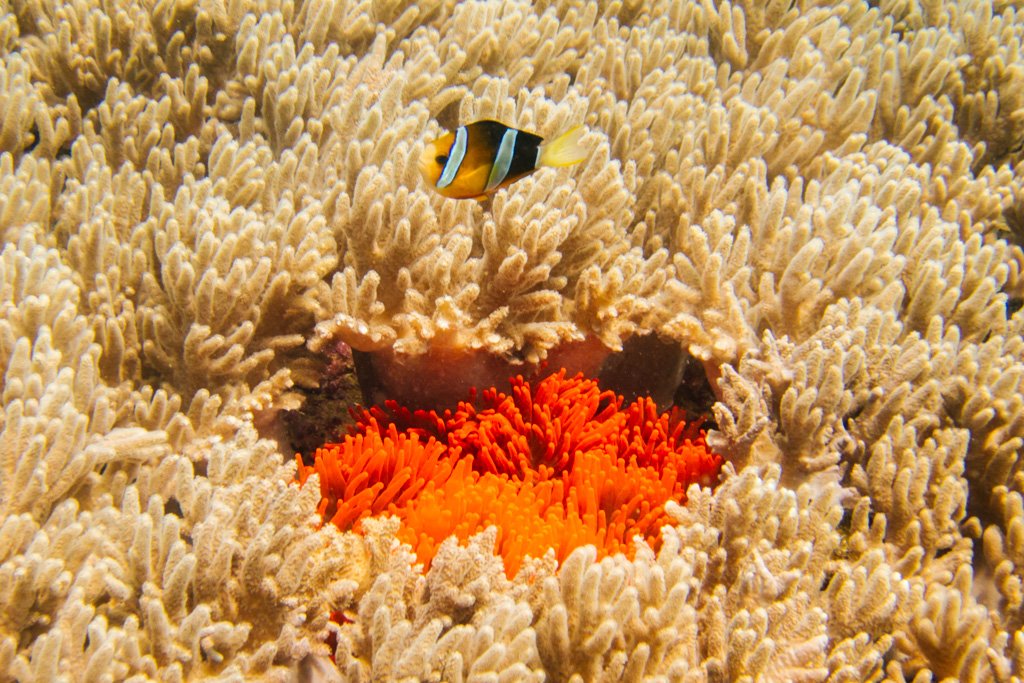 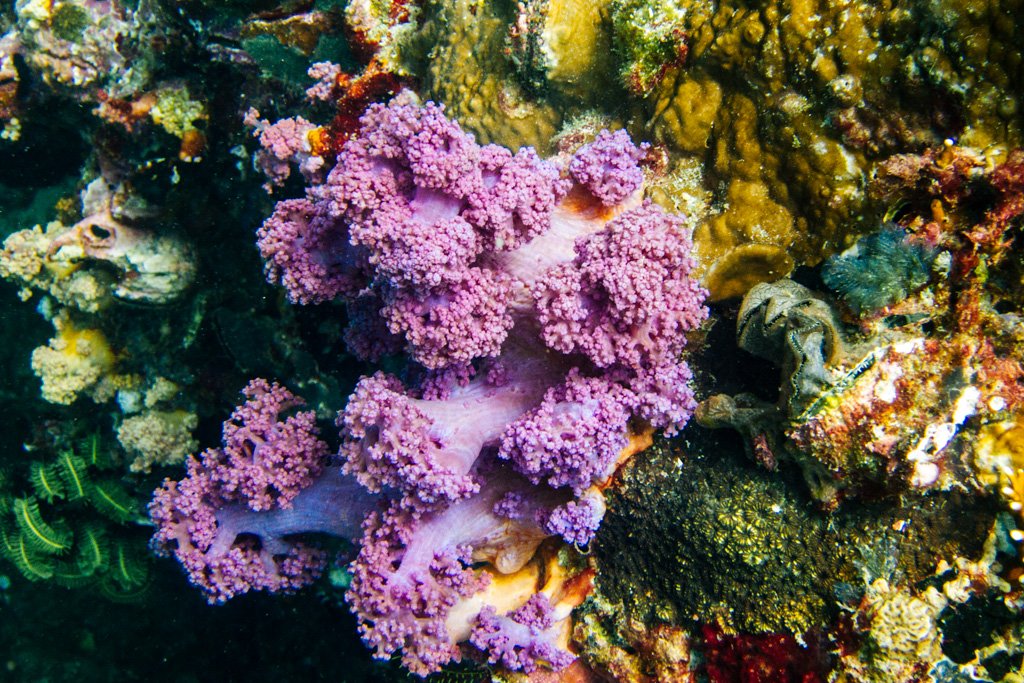 I know you can never really have enough time in a place when you’re traveling, but man do I wish I had a few extra days on Malapascua. I didn’t spend nearly enough time lounging in the resort’s beach chairs or hammocks because of a last minute project I had to work on whenever I wasn’t diving.

I did, however, eat every single one of my meals at the Craic House, Evolution’s onsite Irish pub. They have some really unique dishes on their menu, many of which you probably won’t find anywhere else in the Philippines. I was loving on their tuna burger and mahi special – seriously, seafood in the Philippines is so fresh and delicious and I ate it nearly every day I was there.

Also, this is super random and maybe not everyone’s cup of tea, but one of my most favorite things about staying at Evolution was the sweet and friendly staff there who would play Bruno Mars on loop every night and sing along (really well, too). Filipinos love their power ballads, as I’d witness over and over throughout my month in the country. I’ll unabashedly admit to belting out some Bruno Mars songs many a Friday night back home in NYC, so this made me really happy.

Mostly I’m just mentioning it here so that I’ll always remember this highlight, but maybe it’ll bring some of you joy as well, should you ever make it to Malapascua and the Philippines. 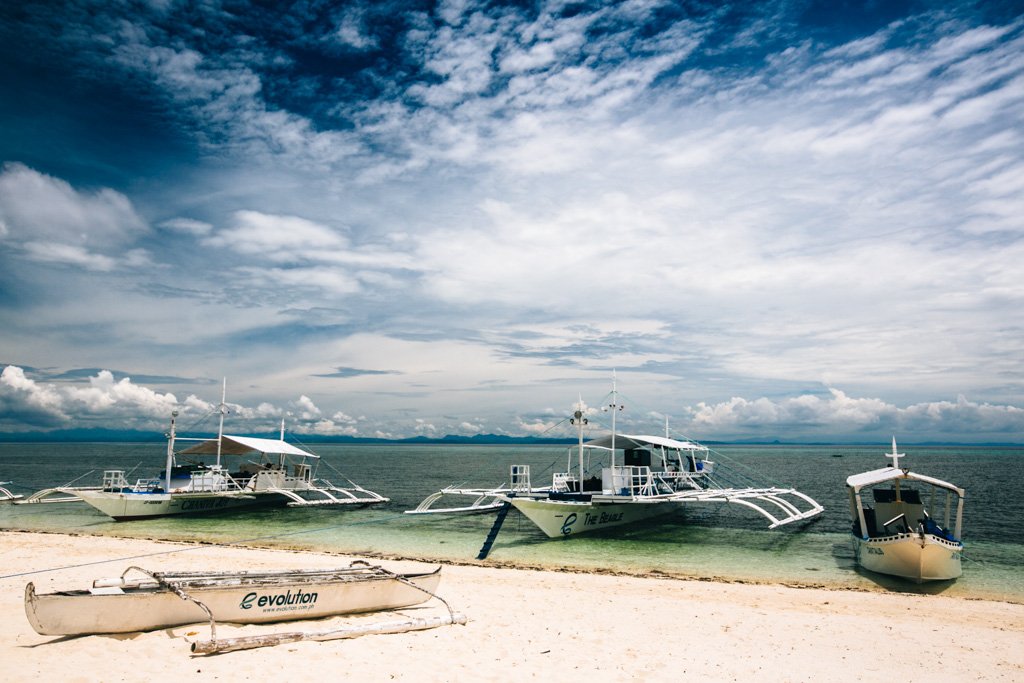 Now that I have my advanced open water certification, my next goal is to book a liveaboard on my next trip to the Philippines! The only question is where :)

Many thanks to Evolution for an incredible diving experience on Malapascua Island. Note that I received a discount on my accommodation and diving course, but as always all opinions expressed here and elsewhere on this blog are my unbiased own, and are uninfluenced by any gifts or incentives I may receive. Tags: AsiaMalapascuaPhilippinesscuba divingSoutheast AsiaSponsored
Previous ArticleA Rough Welcome to the Philippines
Next Article Kalanggaman: The Most Glorious Sandbar Island In All The Land