By on Europe Spain

In early 2011, I scored an absurdly cheap flight to Spain, thanks to a fare glitch on Delta (we’re talking $200 return from New York). I knew that fare wouldn’t last long, so I booked it on an impulse for a random 2 week trip in March.

Blessed by some serendipitously excellent timing, I soon realized that one of Spain’s major festivals, Las Fallas, would be taking place smack in the middle of my Spain trip. With that, I planned everything around this 5 day event in Valencia. And I am so glad I did, because Las Fallas is one of the best travel experiences I’ve ever had, and definitely one of the best things to do in Valencia. 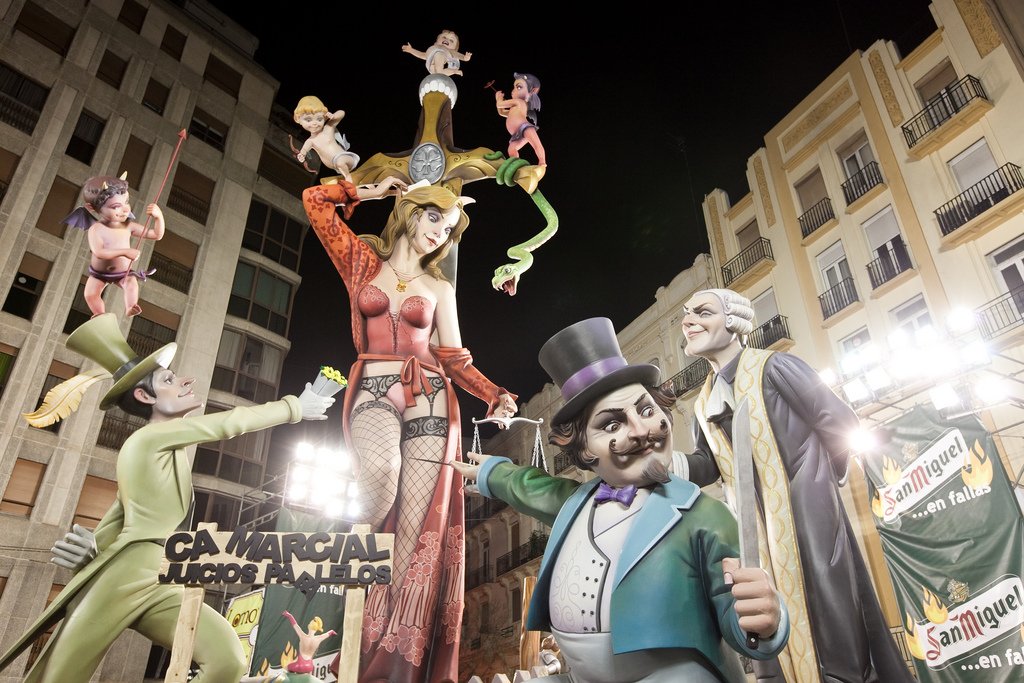 From March 15-19 each year, the people of Valencia commemorate St. Joseph with this 5 day celebration. Each neighborhood bands together to plan and execute the construction of a falla of their choosing: that is, a massive monument (often of a famous person or character) that criticizes some worldwide theme or issue. It’s a year-long process that calls for much brainstorming, fundraising, and artistic skill, culminating in the Las Fallas festival, where over 500 fallas are shown off around Valencia before being set on fire on the last night.

While the fallas are certainly the focal point of the festival, there’s plenty more to experience: from setting off firecrackers and drinking in the streets at all hours to parades to the nightly fireworks displays. Here’s everything you need to know about how to celebrate Las Fallas in Valencia —

Check out the Fallas

On nearly every street corner and square you’ll come across a falla display, some more elaborate and/or massive than others. They’re all some degree of absurd, though, containing characters in unnatural positions with strange looks on their faces, all in an effort to depict a satirical scene poking fun at a contemporary issue or relevant theme. Past festivals have showcased noteworthy American presidents like Barack Obama and George W. Bush and Disney characters like Hercules and Shrek. 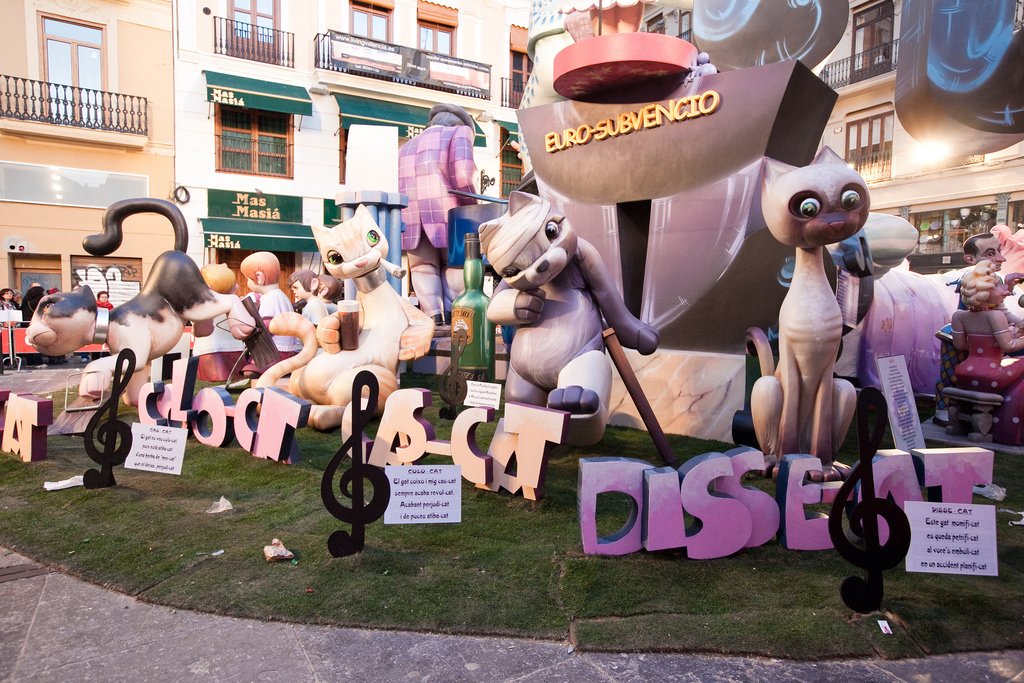 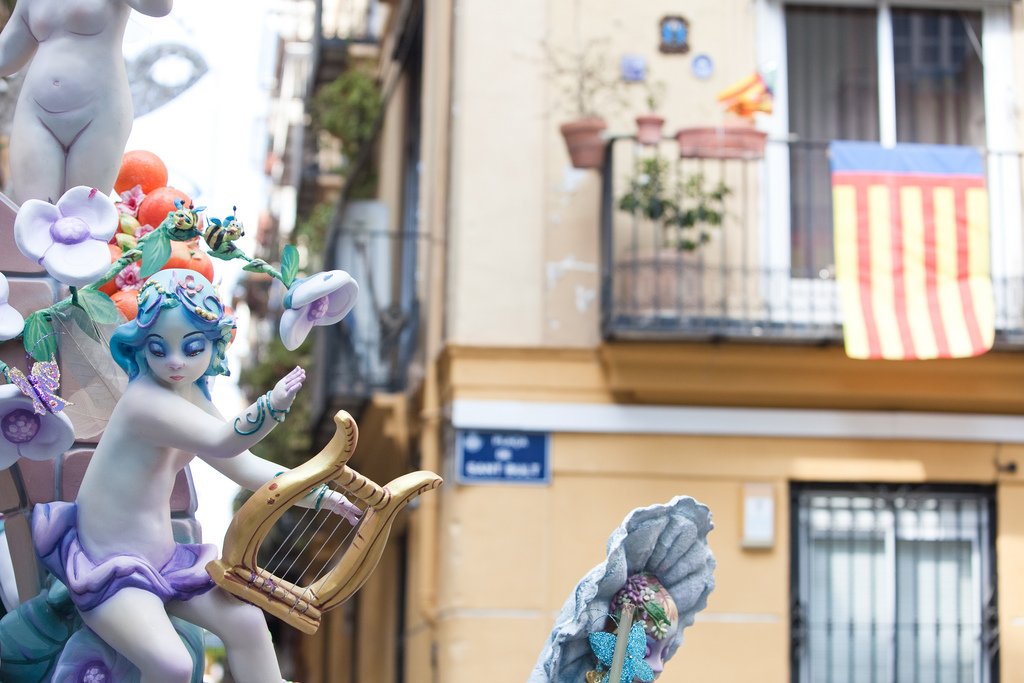 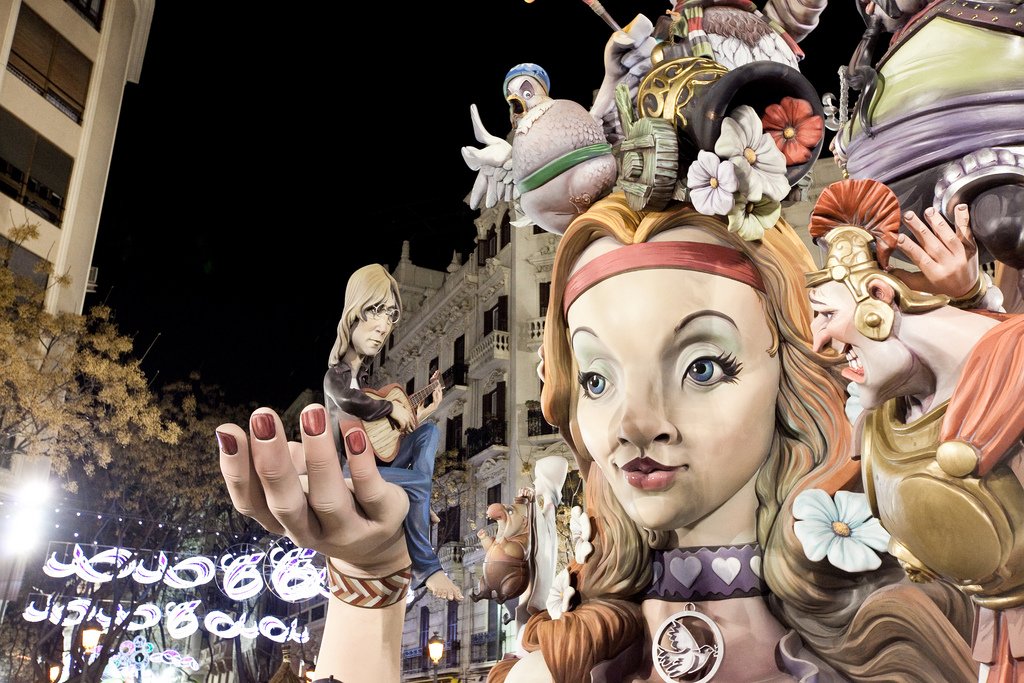 Like Rome, these fallas aren’t built in a day: they’re constructed over the course of several months and usually not seen in their entirety until they’re assembled for this festival. Made out of cardboard, paper mâché, wax, wood, and styrofoam, they can be up to 5 stories tall. And Valencians take their fallas very seriously, with neighborhoods vying for the best sculptors and painters to contribute to their display. The top fallas are awarded at a ceremony, with the First Place falla being the last to burn during La Cremà (on the last night).

If you wander around town before the festival begins, or on the first day of it, you might see villagers putting the finishing touches on their fallas. By the 16th, they should all be completed and ready for judging. It’s worth going early on to watch the locals in action, if you can. 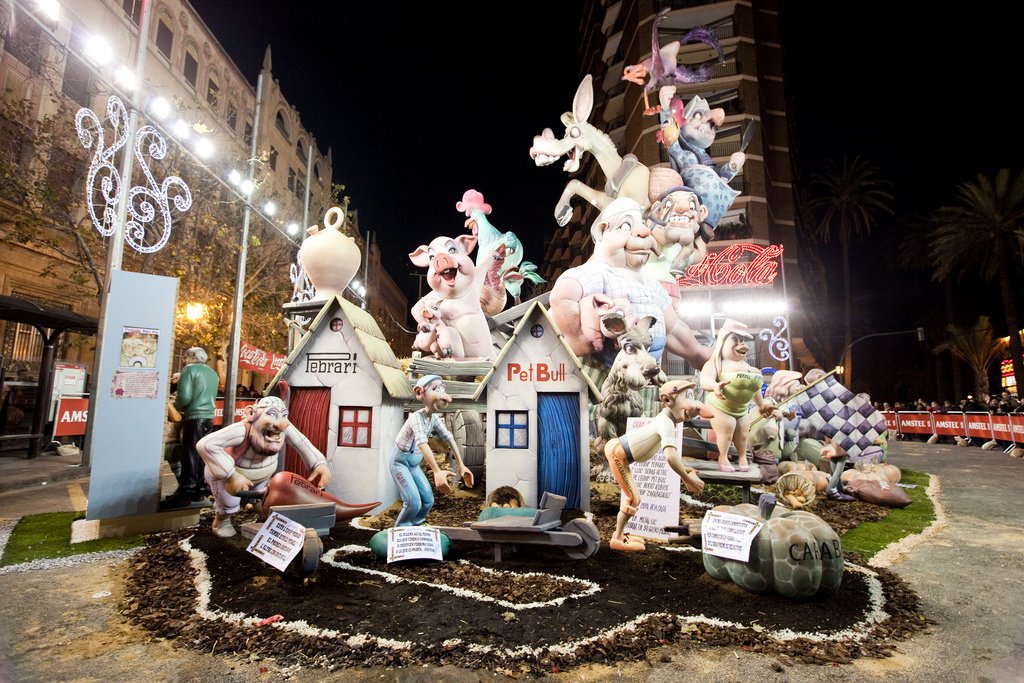 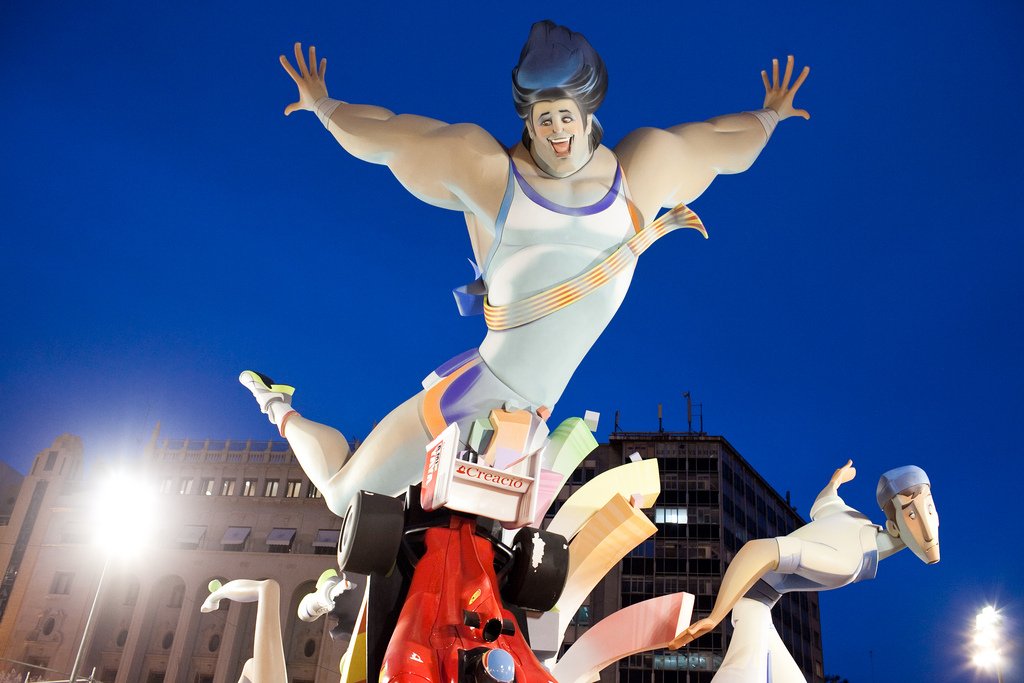 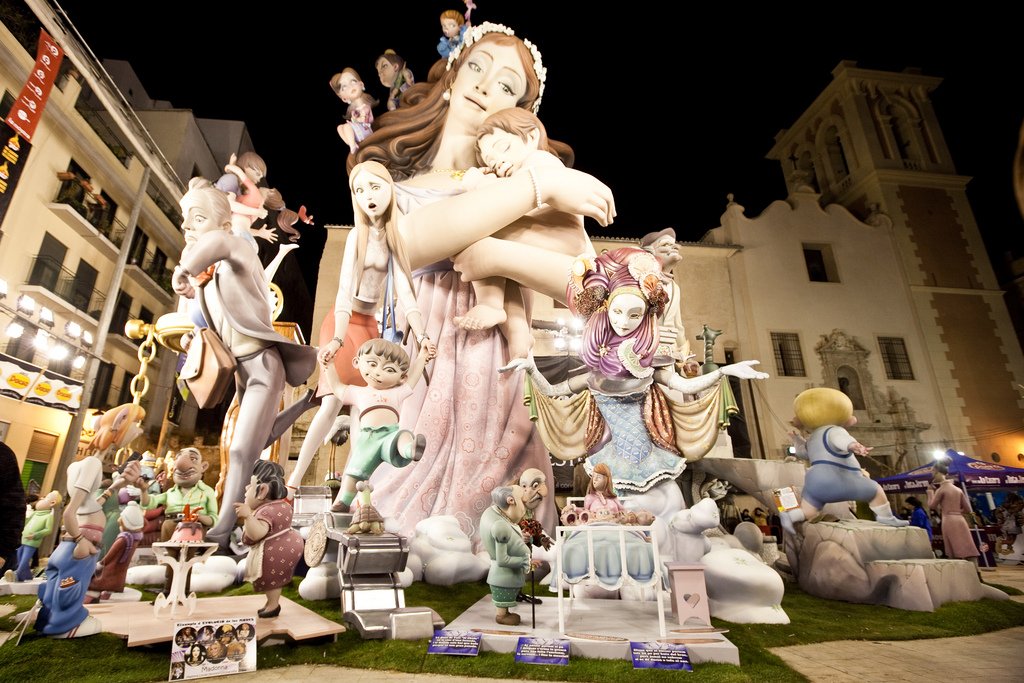 Be a spectator at La Ofrenda (the flower offering parade)

Starting around mid-afternoon and going until midnight on both the 17th and 18th, Valencians dressed in authentic garb make their way through town towards the Plaza de la Virgen. La Ofrenda is essentially a parade with most participants carrying flowers to deposit at the Virgin Mary statue and pedestal in the plaza. 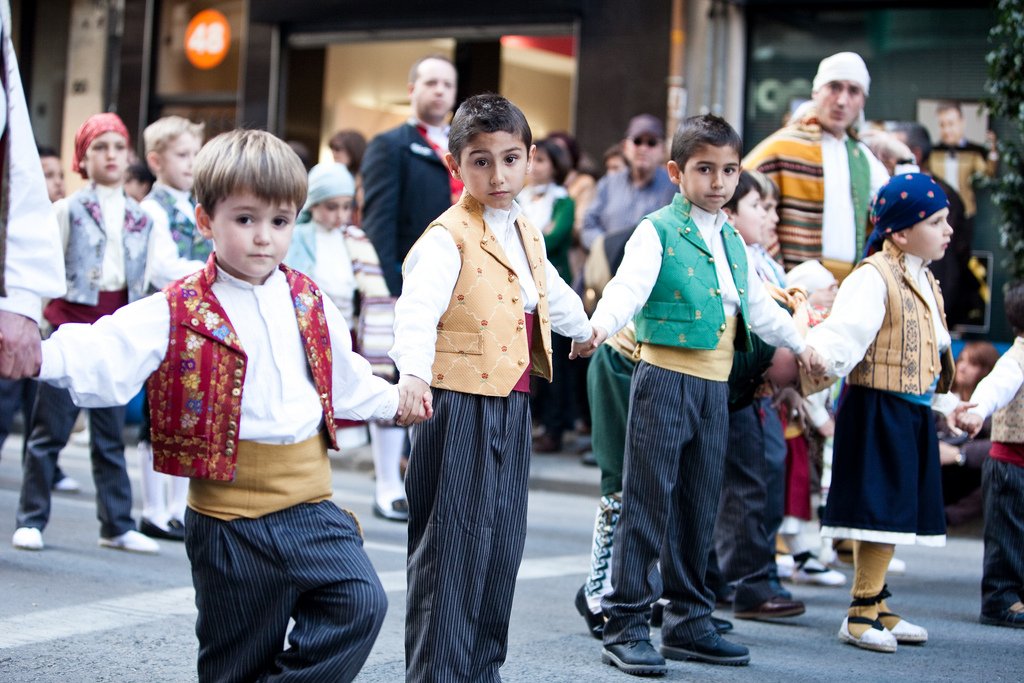 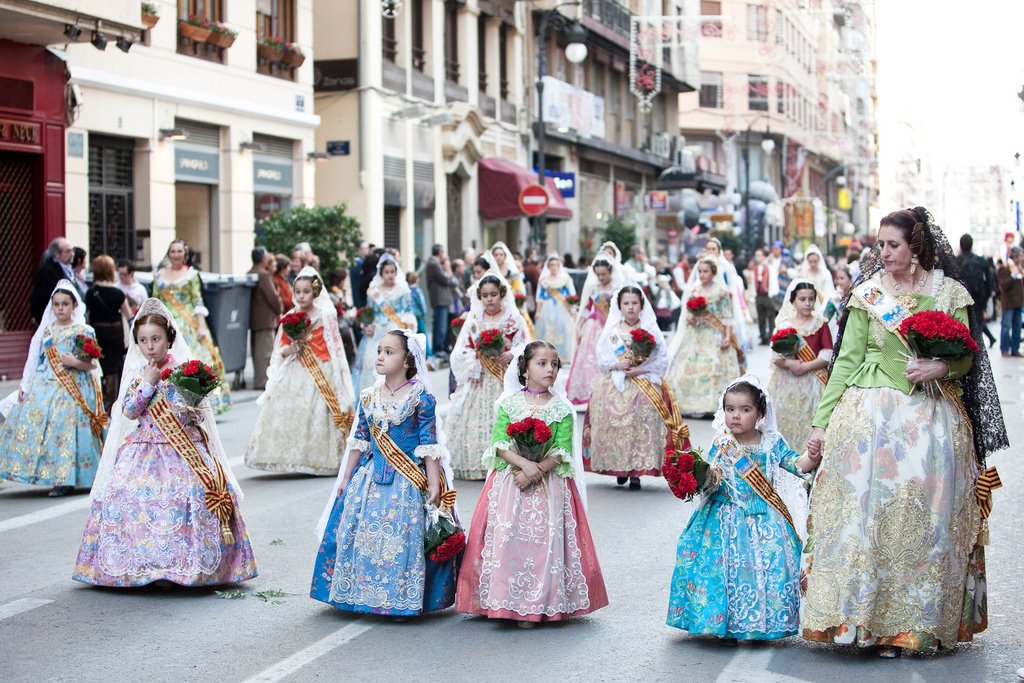 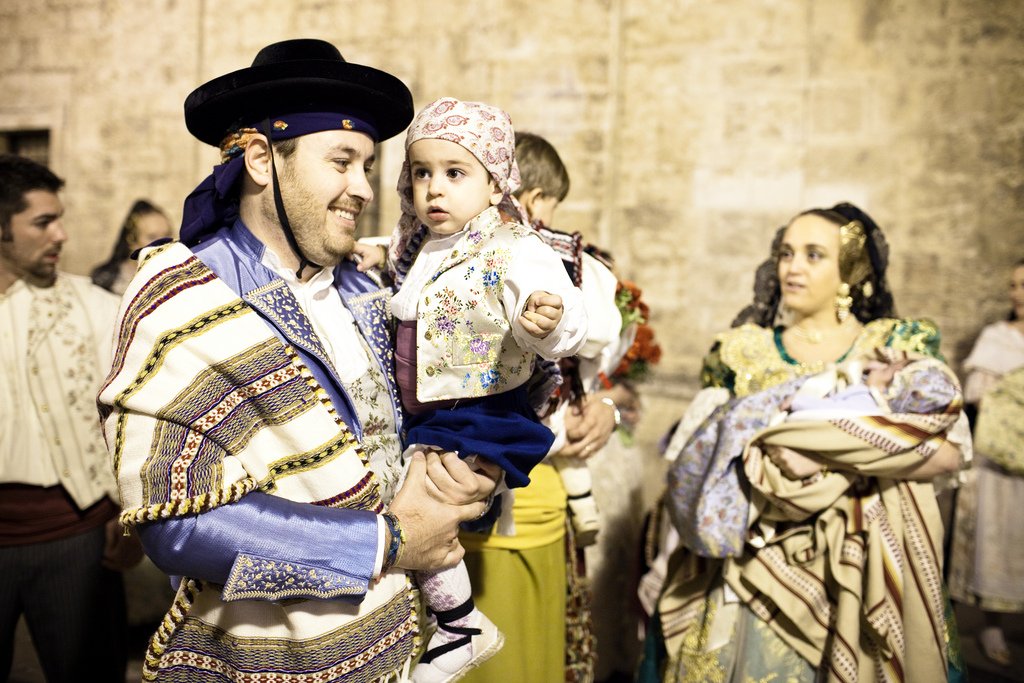 If you stop by the plaza on one of the first days of the festival, you’ll see the monument empty; by the end of Day 2 of La Ofrenda, it’ll be completely filled in with colorful flowers. In addition to watching the procession from the street, I’d recommend grabbing a spot in the plaza so you can watch as they fill in the statue. The flowers get passed off to people at the plaza, who follow a strict color pattern to fill in the Virgin Mary statue and pedestal. It’s absolutely fascinating to witness! 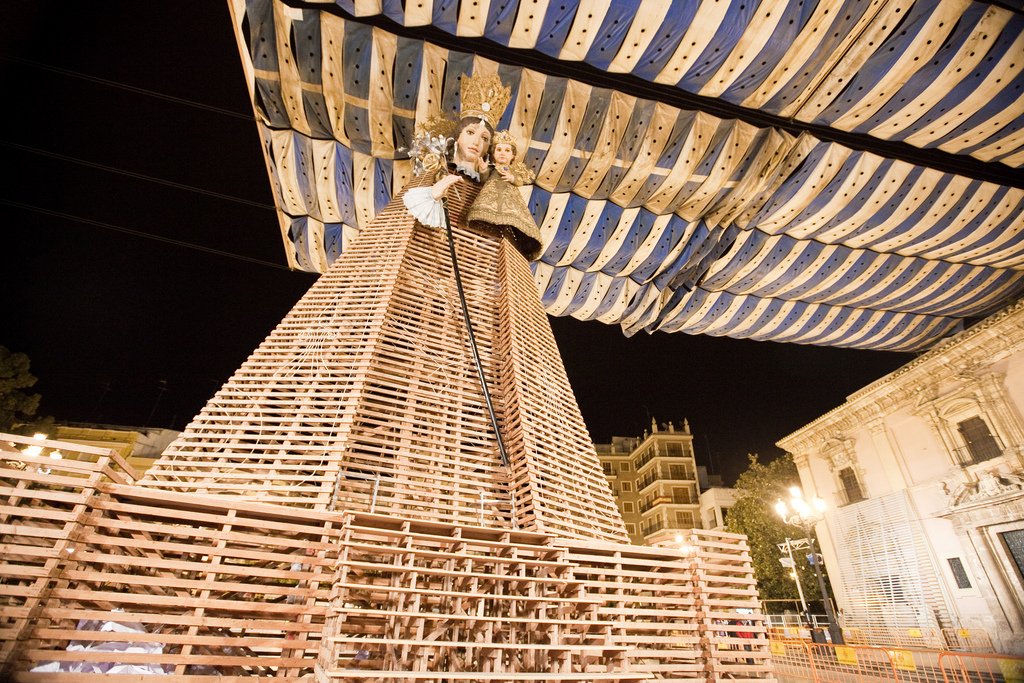 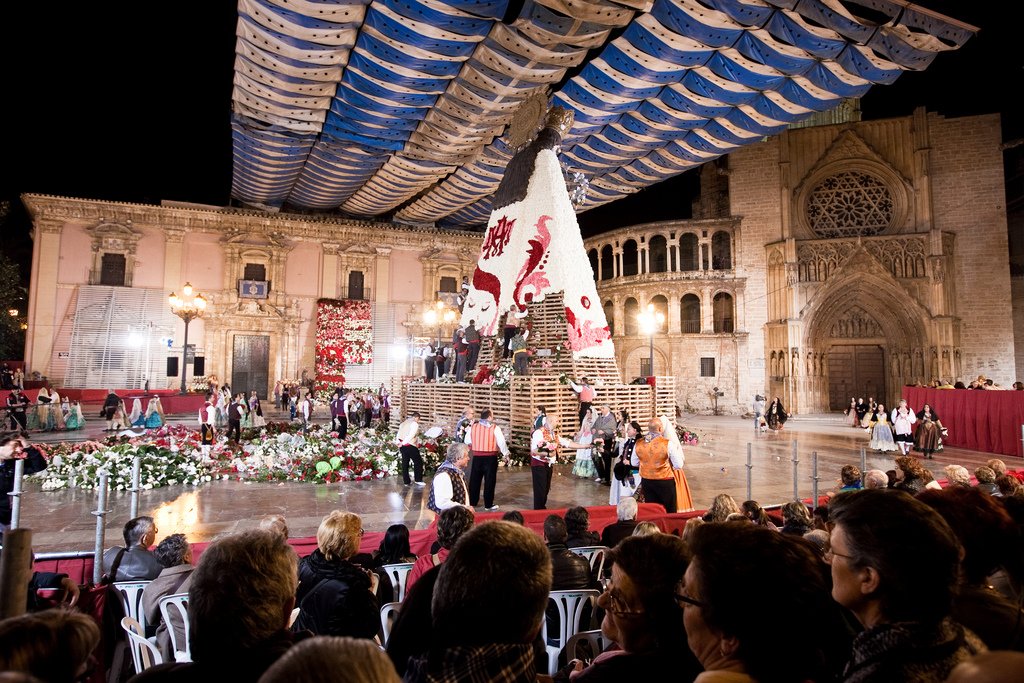 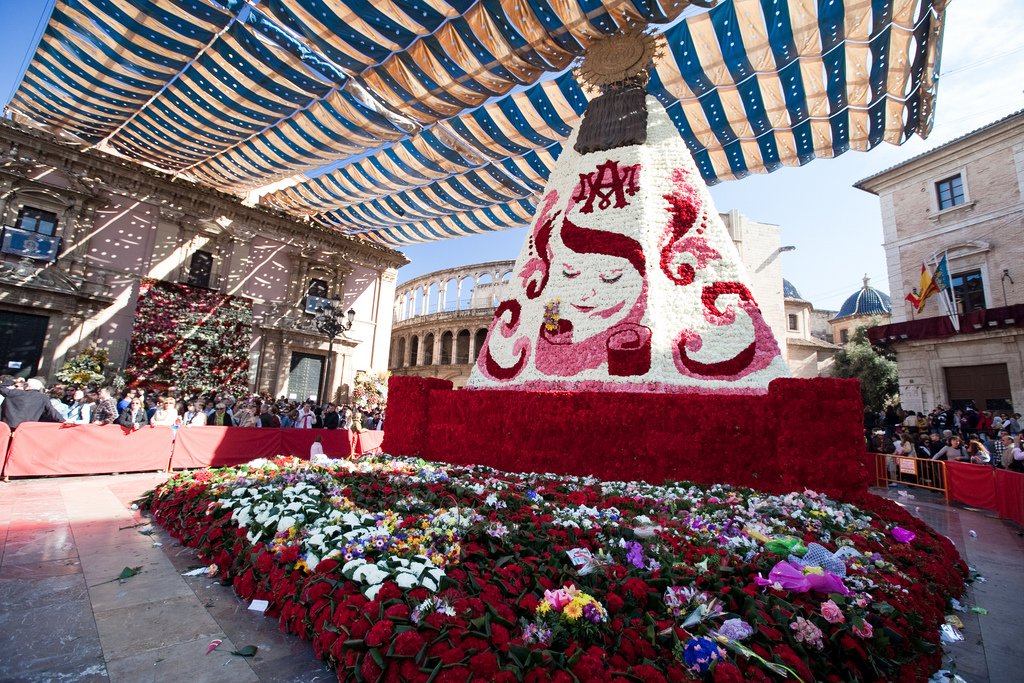 Watch the fallas go up in flames during La Cremà

Las Fallas culminates in La Cremà, when all the fallas are set on fire on the last night. Starting at around 10pm, the smaller children’s fallas are set off; then around midnight, the bigger adult fallas are burned.

I’d recommend choosing in advance which falla you’d like to see burnt, then showing up around 10:30 to grab a spot close to the action. Beware, though: if it’s one of the more popular fallas, you’ll likely be trapped in a massive crowd. Once nearly all of the fallas are aflame, the first place winner gets set on fire, followed lastly by the “official” falla in the Plaza del Ayuntamiento (around 1am). 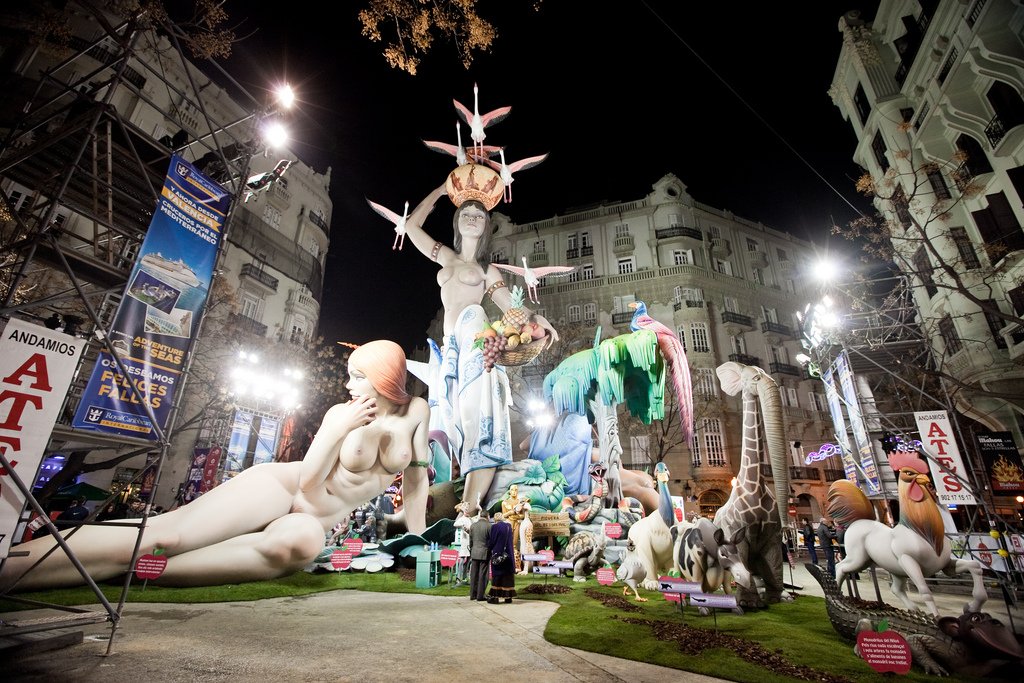 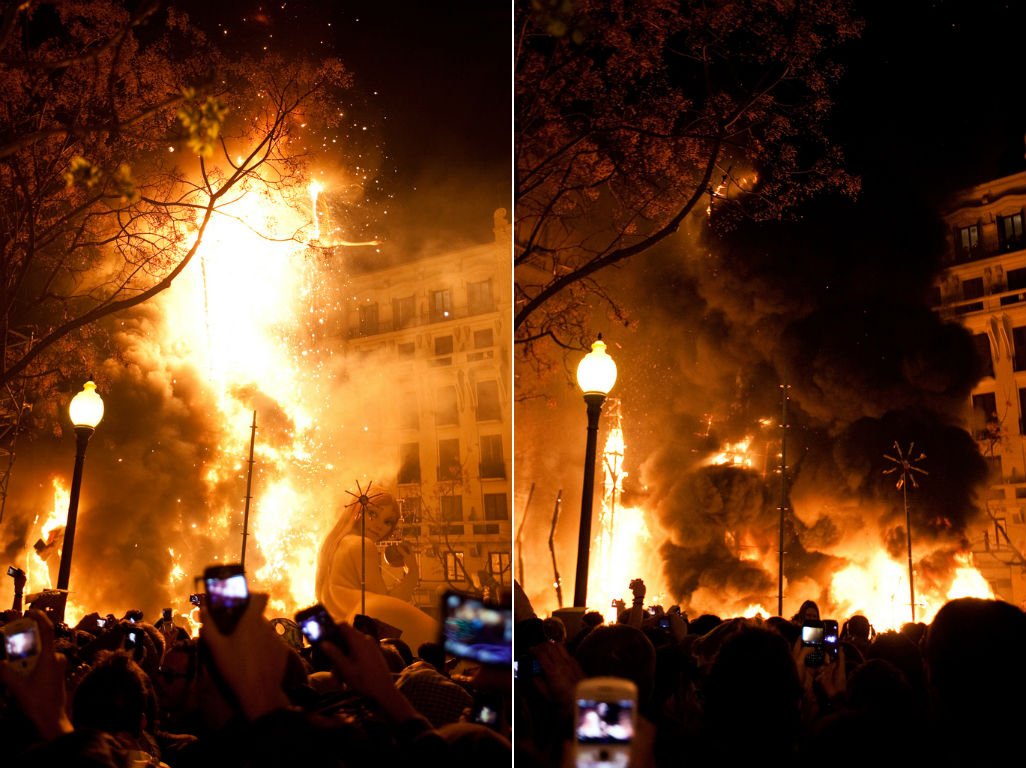 I think I was expecting them to just take a match to the fallas and let them passively catch fire, but I should have known that the festival finale would be a little more dramatic than that. Throw in some crazy pyrotechnics and a pinwheel of flames amidst a massive black cloud of smoke and that more closely approximates what we witnessed at La Cremà. Check out this video I took to capture it!

Party on the streets

Las Fallas is basically a nonstop party for 5 straight days, where little kids and elderly folks throw firecrackers on the streets (seriously – watch yourself while you’re walking around town!), music is perpetually playing, and people are drinking both indoors and outside. If I had to describe the festival in a word, it would be LOUD. But you get used to it, even the random cracks and booms of the firecrackers and fireworks set off around the clock.

If you’re going to partake in the partying just once, let it be on the last night after La Cremà. The streets will be filled all night long with jubilant revelers of all ages enjoying the street food, music, and dancing. 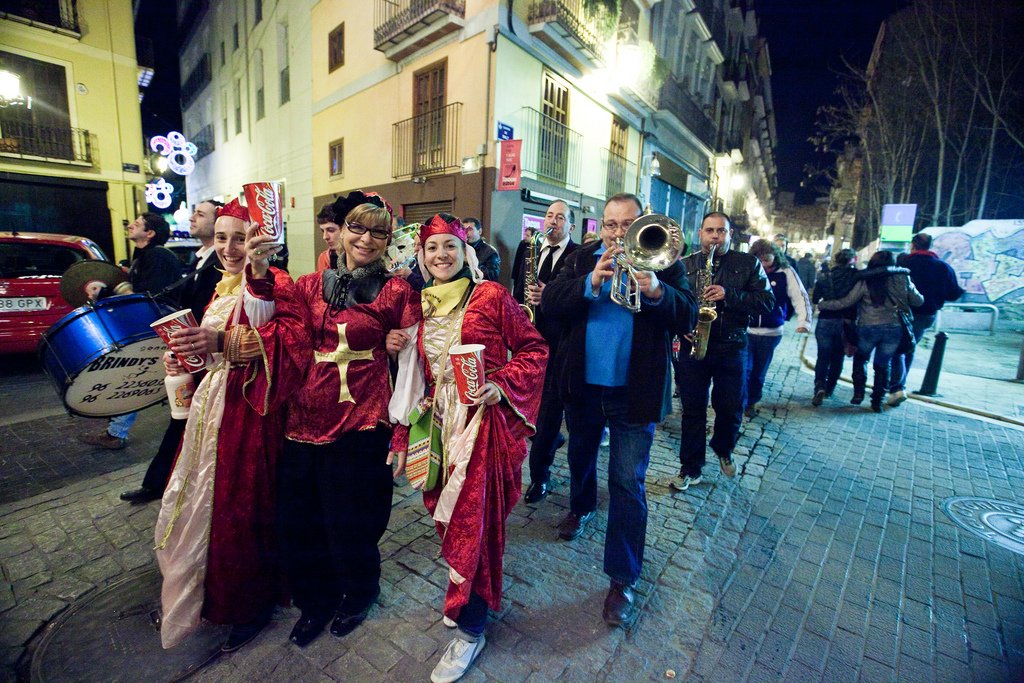 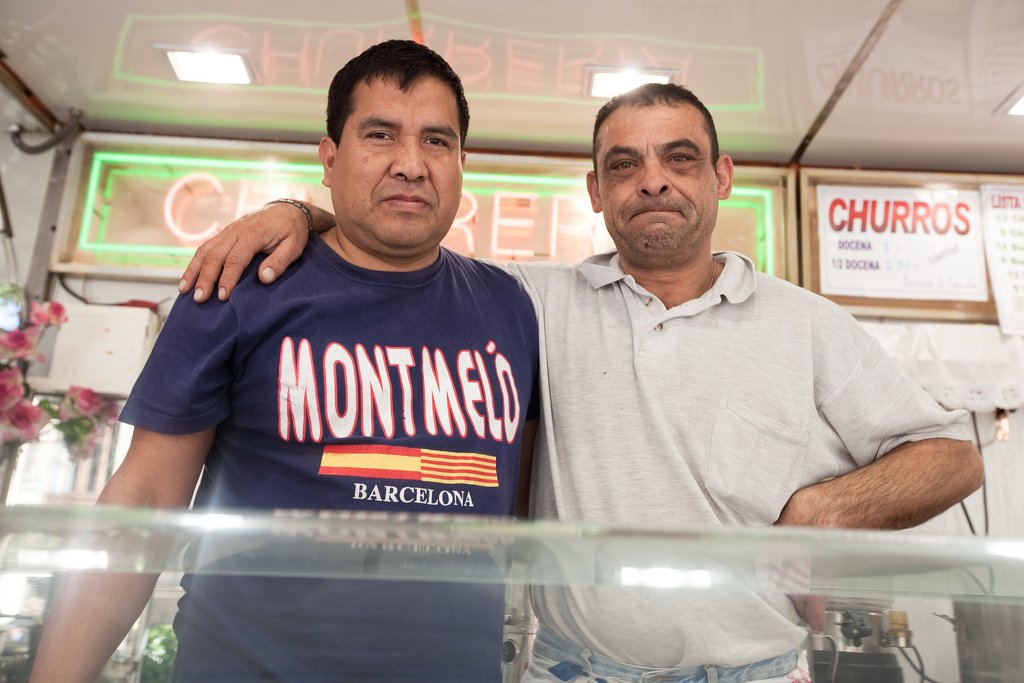 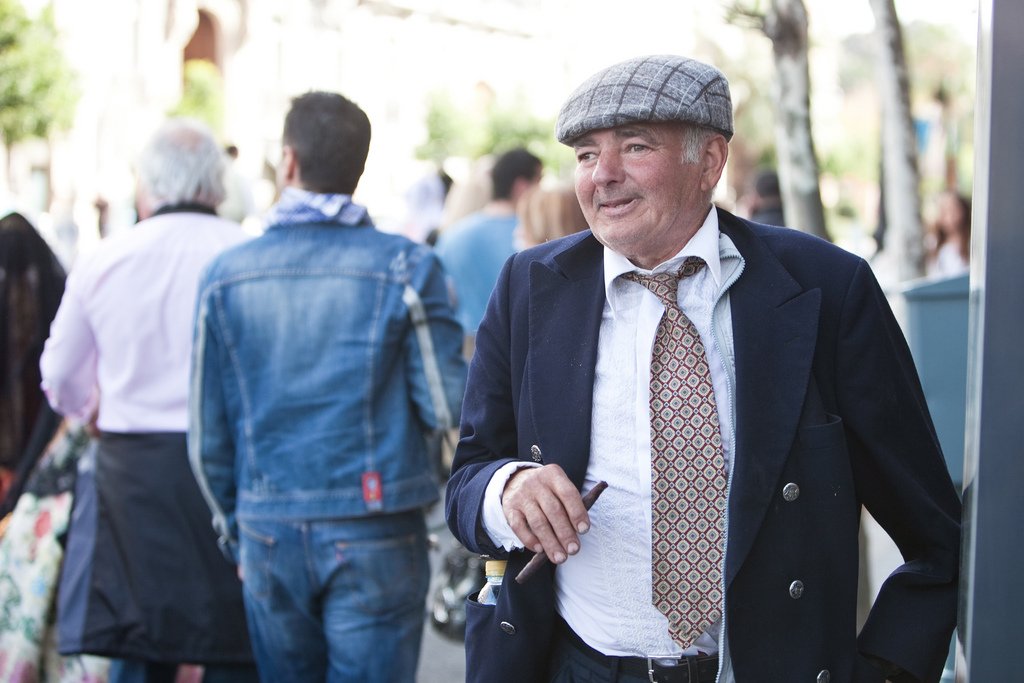 On every night of Las Fallas (except for the last one, the 19th, when everyone’s too busy setting fire to all the fallas during La Cremà), there is a magnificent fireworks display over the river on the Paseo de la Alameda around midnight or 1am. The last of these 4 nights of fireworks (the 18th) is the biggest and most impressive, called Nit de Foc (night of fire).

Now, in recent years I’ve snagged tickets for front row seats to the famous New Years Eve firework shows in both New York and in Sydney. Of course it was exciting to see fireworks exploding over such iconic landmarks as the Manhattan skyline and the Sydney Opera House, but I’ve never witnessed anything like the fireworks at Las Fallas. Though there weren’t multiple displays spread out over the water like at those aforementioned ticketed shows, it felt like the same amount of fireworks concentrated in one spot, with a new burst happening every micro-second. And every burst was vastly different than the previous one. Basically, the entire fireworks show was like a grand finale. 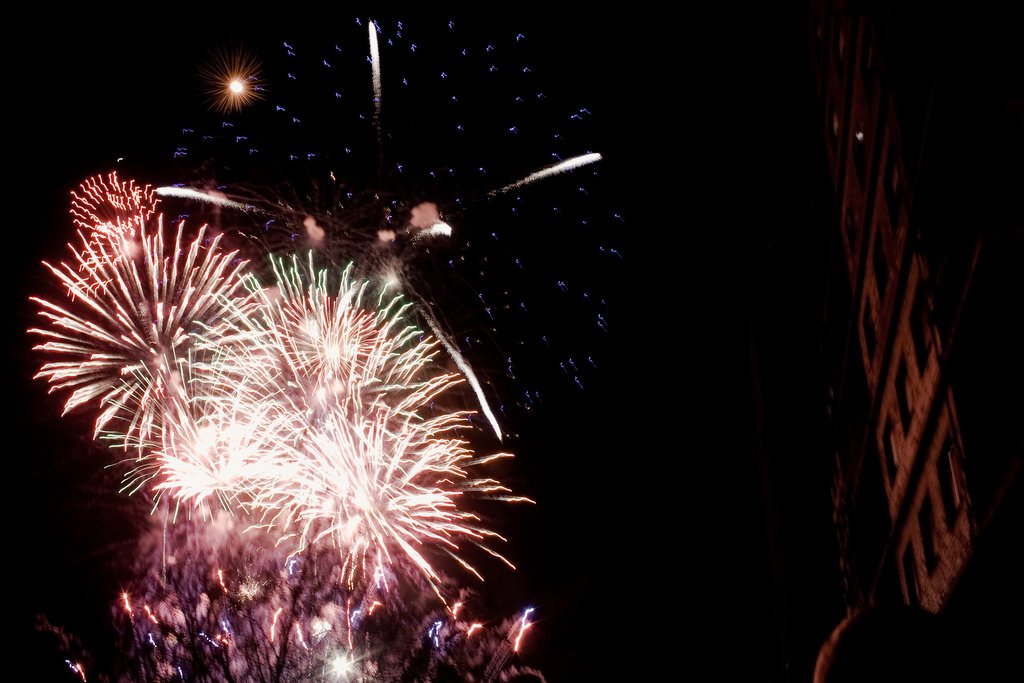 Part of the magic is how accessible they are: all you have to do is pop out of whatever bar you happen to be in around midnight and stroll over to the river to watch the show. No tickets, no waiting, no pushing through crowds just to gain a semi-obstructed view. If you go close enough to the source (between Exposición Bridge and Las Flores Bridge) and look straight up, it’ll feel like the fireworks are falling right on your face. I still remember this feeling 4.5 years later, and rewatching this video I took takes me right back:

Certainly not unique to Las Fallas or even Spain, yet I still say a trip to Valencia is incomplete without sampling some horchata y fartones. Horchata is a chilled drink made from tigernuts, water, and sugar, said to have originated in Valencia. Fartones are long, pastry-like sticks dusted with sugar. Care to guess how these treats are best consumed? :) 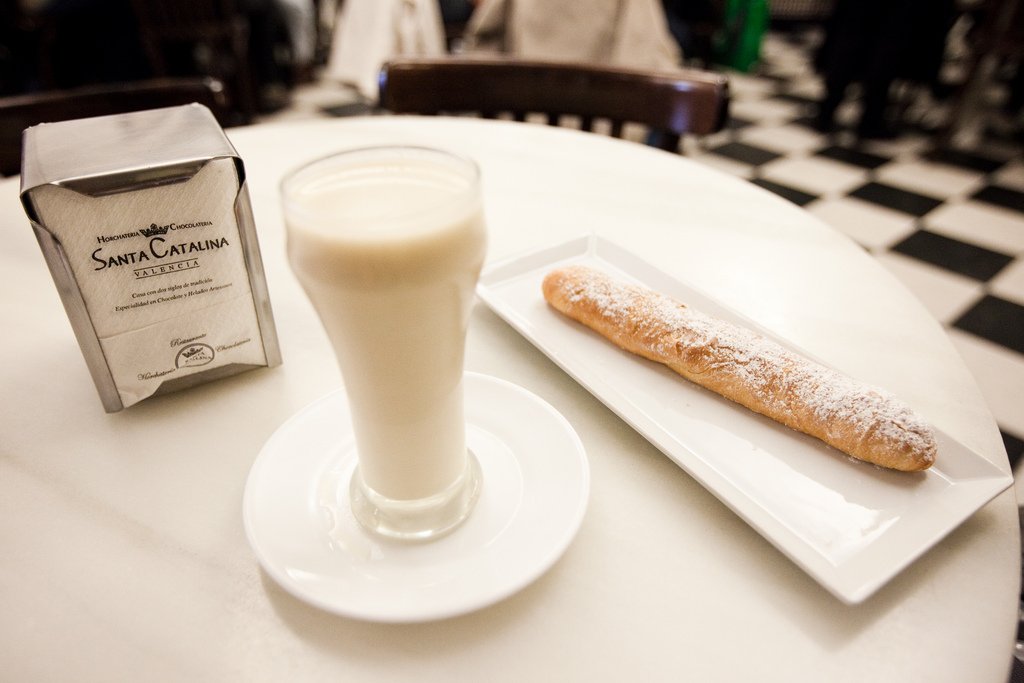 When in Valencia for Las Fallas, sneak away from the crowds and get yourself to a horchateria to order these two things. You could probably get the cheap version from a street vendor, but this type of cafe specializes in them. I can recommend Horchateria Santa Catalina (which, by the way, doubles as a chocolateria – YOU’RE WELCOME).

Once you’ve made your rounds around town and seen most of the fallas, there are plenty of other things to do in Valencia. Consider spending one afternoon at La Ciudad de las Artes y las Ciencias, an “entertainment-based cultural and architectural complex”. Getting there requires a lengthy walk from the old town through the old riverbed (which has since been turned into a park), but it’s totally worth it to geek out over the gorgeous modern architecture there. Or if cultural offerings are more your style, you can check out the planetarium, science museum, performing arts center, or aquarium.

I spent hours wandering around the complex, admiring the symmetry amongst the white buildings against the deep blue sky, then bought a ticket to L’Oceanogràfic and explored this open-air aquarium. 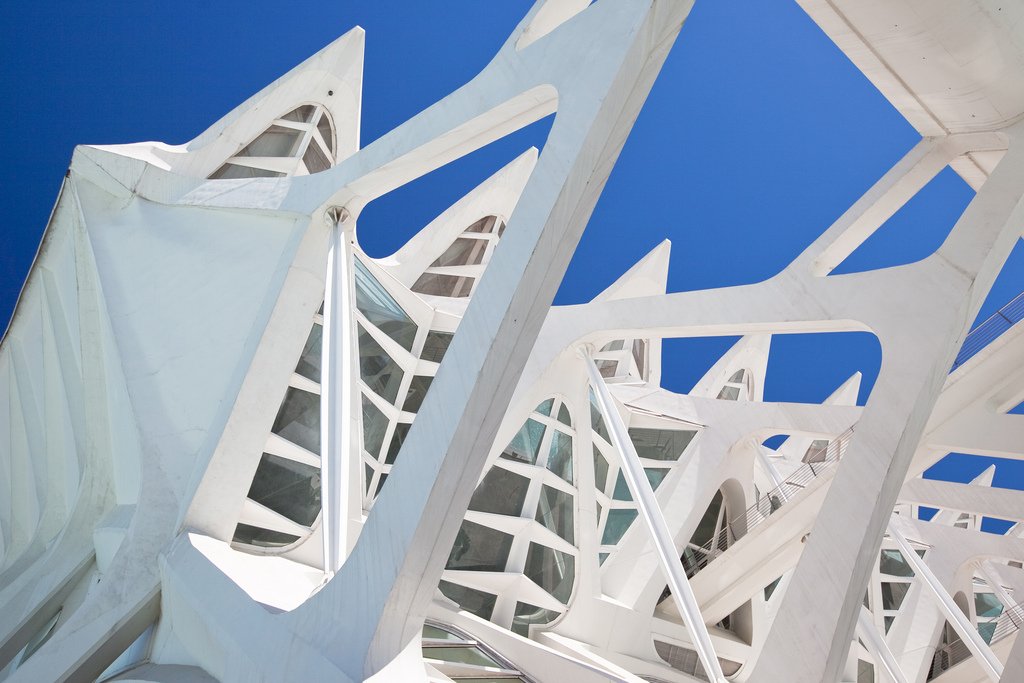 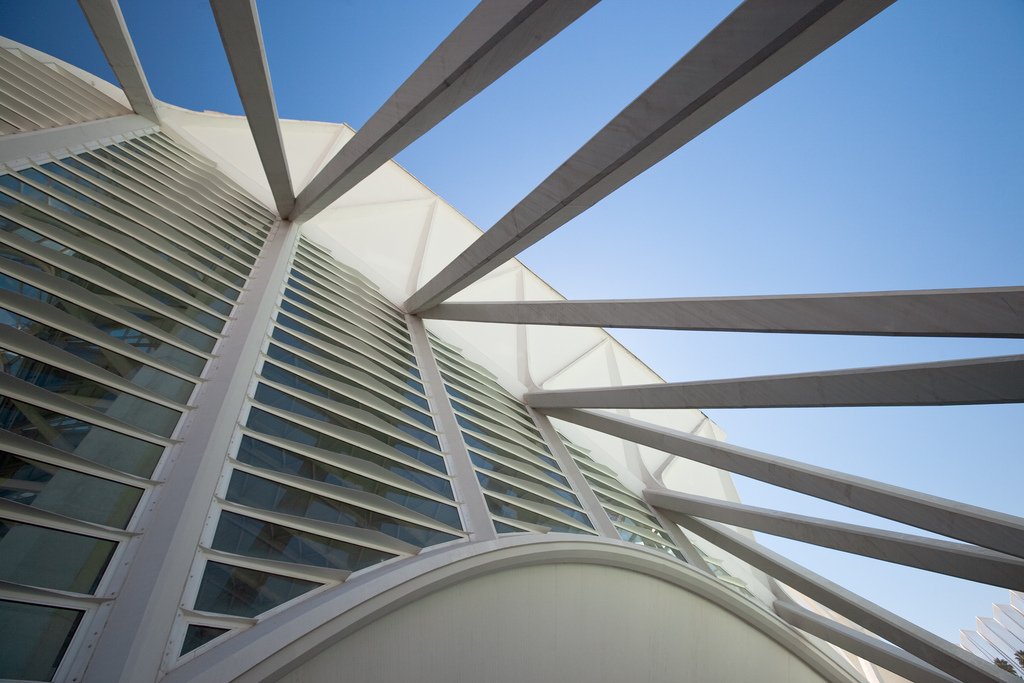 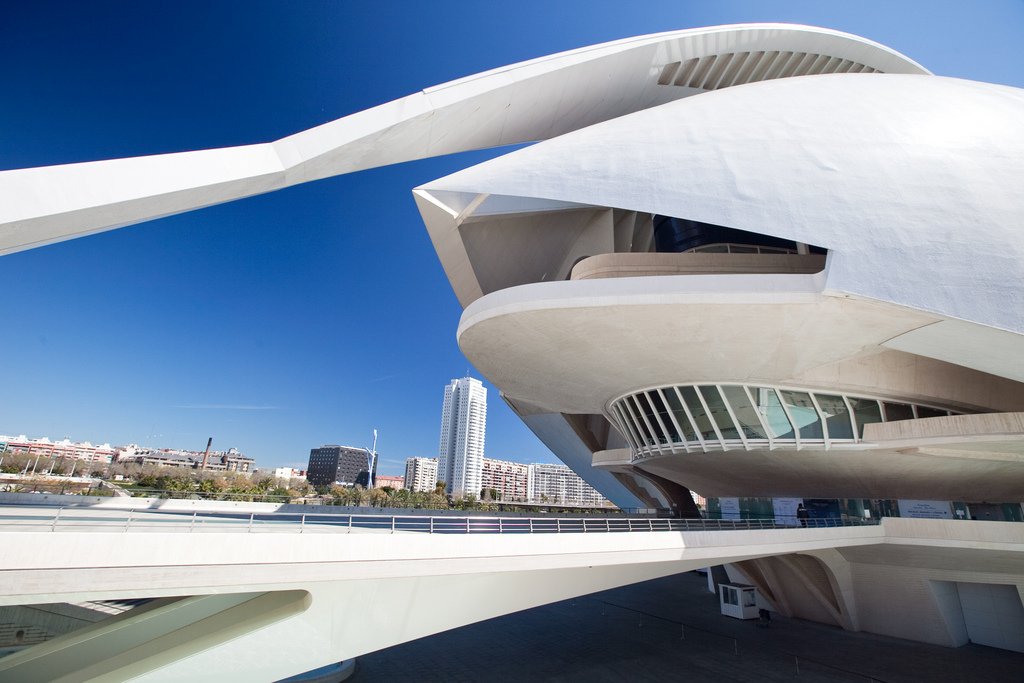 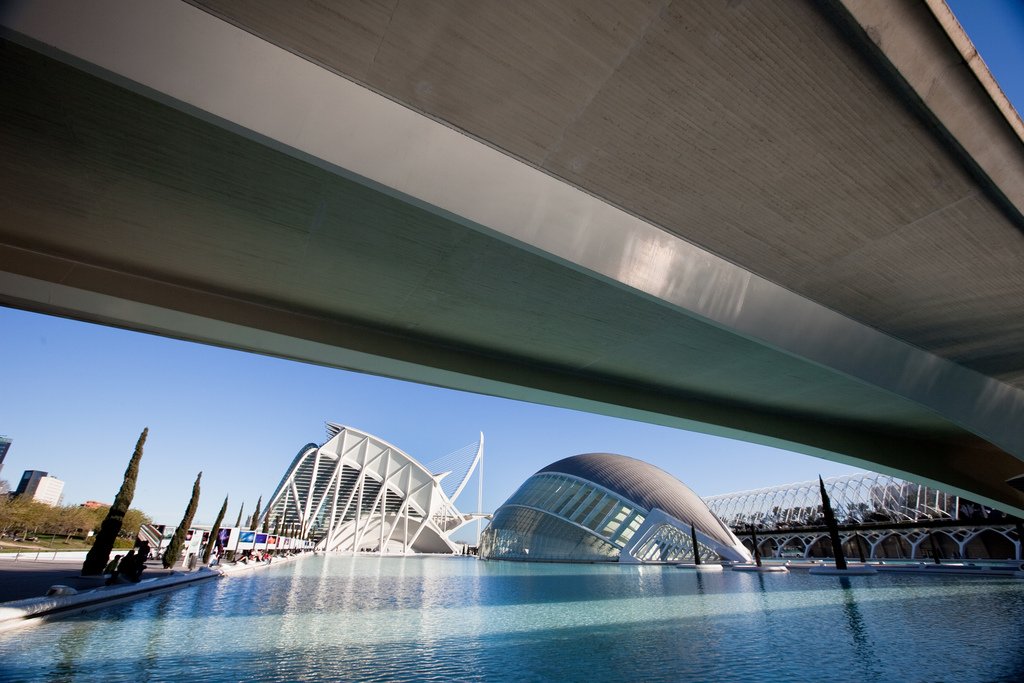 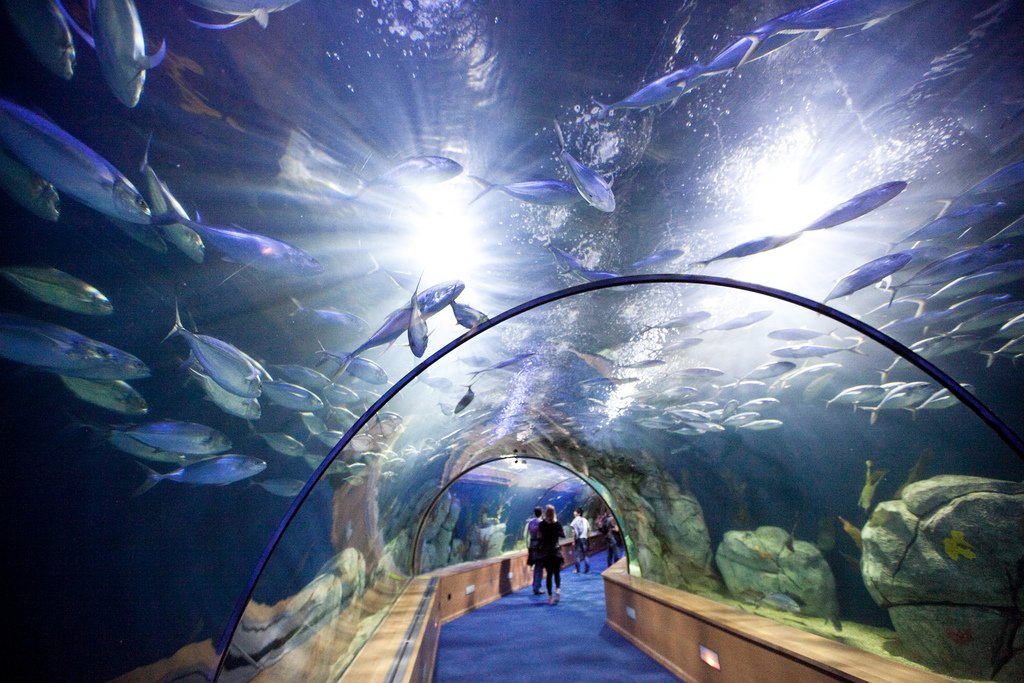 No matter your agenda, La Ciudad de las Artes y las Ciencias is a seriously impressive complex worth making time for if you’re in Valencia for Las Fallas.

Book your accommodation early, and for at least 4 nights

Not surprisingly, accommodation fills up fast during this popular festival, so definitely book a room/bed as soon as possible. Many places require a 4-night minimum stay and raise their rates on festival dates, but don’t let this deter you from experiencing this amazing event. Trust me, you’ll want at least 4 nights to savor it all – and it’s absolutely worth the money. I stayed at the Purple Nest Hostel during Las Fallas, as it was the only accommodation I could find with such short notice.

Click here to book a stay at the Purple Nest Hostel in Valencia. 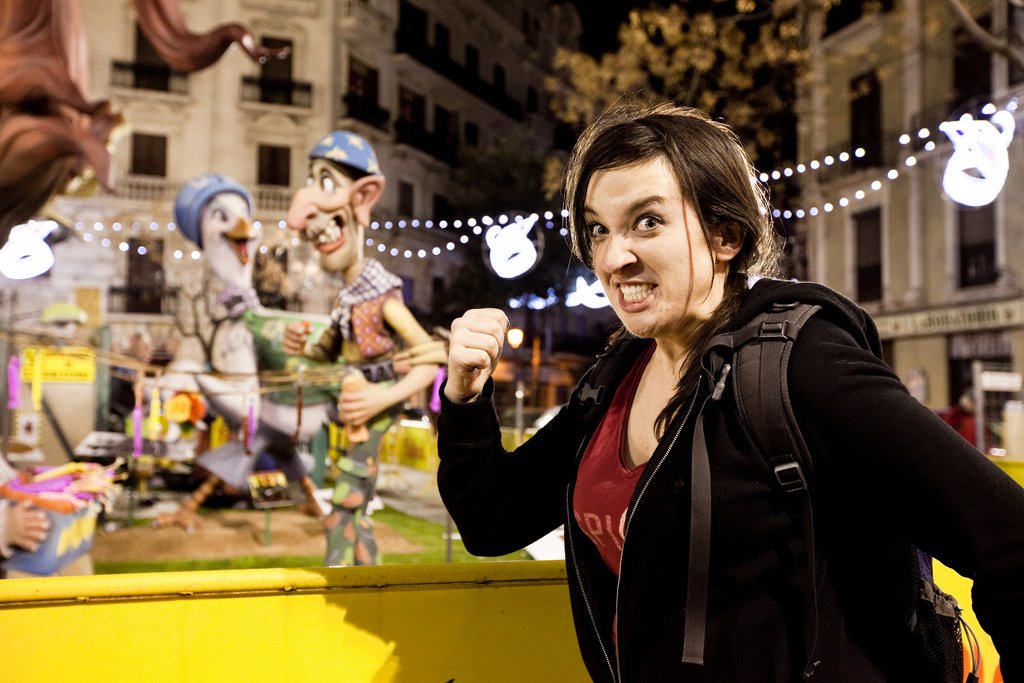 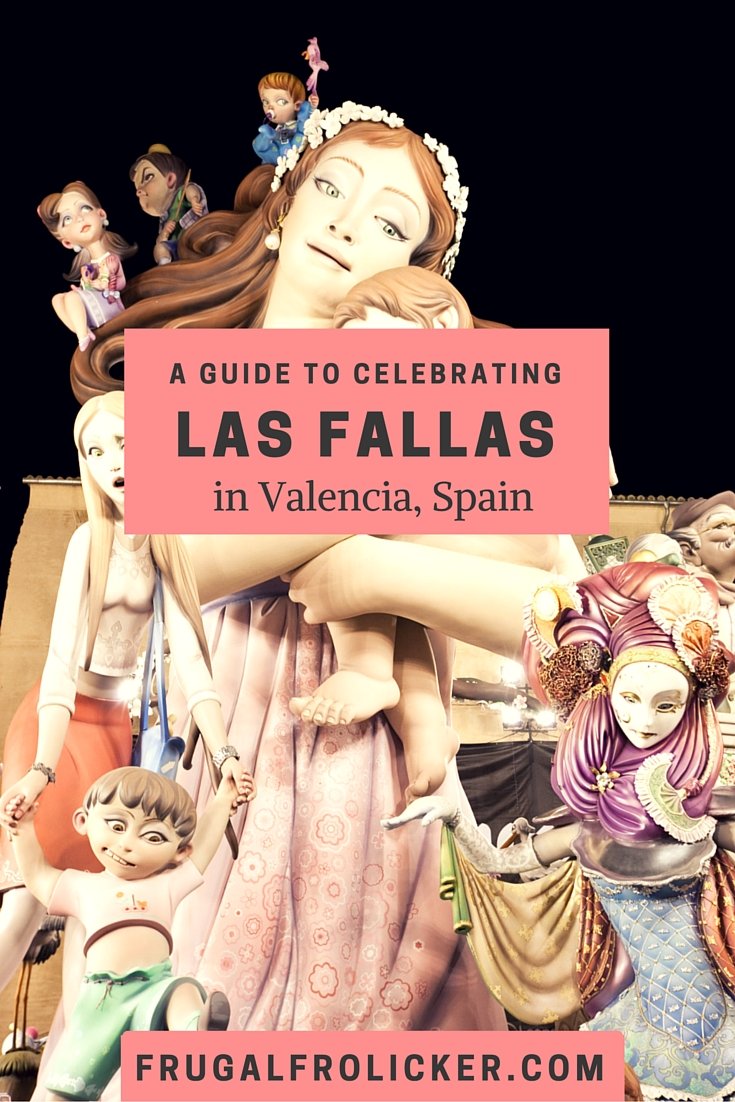