By on Australia Camping Outdoor Adventures

Often when I’m road tripping, it’s all about what I’m seeing and doing and less about where I’m resting my head at night. Just give me a flat patch of grass or dirt in a somewhat quiet spot, ya know?

But on my Eyre Peninsula road trip last year, I found myself constantly in awe of the campsites I was staying at, most of which were free and near-empty.

I’ve not yet written about the Eyre Peninsula (except for this little story),  so for those unaware (which I expect is most of y’all): the Eyre Peninsula is located in South Australia, it’s remote, and it’s undertouristed. And, as I recently learned, it’s pretty freakin’ glorious… but more to come on that soon.

For now, I thought I’d share 5 of my best finds for Eyre Peninsula camping – and you’d better believe each campsite is located right on the coast!

READ MORE: Things To Do On An Eyre Peninsula Road Trip

I arrived at this campsite on Tumby Bay at dusk on my first night on the Eyre Peninsula, giddy to find I had it all to myself. I could hear the water nearby, but couldn’t properly see the area around where I’d parked my van.

That October night, it was balmy enough for me to sit with the van door open for hours and gaze out at the night sky, which was completely full of stars. With no trees or buildings anywhere nearby, I had a clear 360-degree view of the horizon over the countryside and sea.

The next morning, I glanced out my window and caught my first glimpse of the coastline: white sand and orange-smeared rocks in either direction. So calm and beautiful! This is a great spot to either grab your camping chair and sit by the water, or go for a short walk along the nearby beaches. 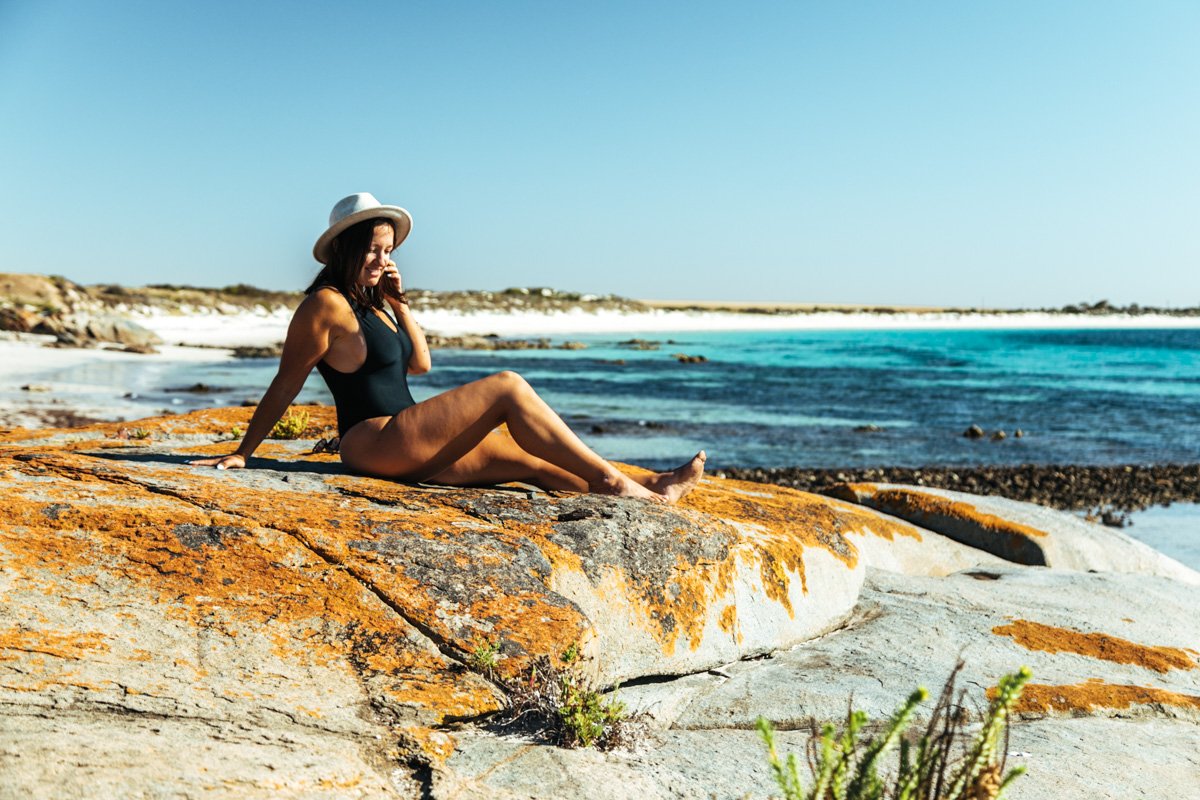 Location: Red Cliff Beach campsite is about 48km or a 38min drive north of Port Lincoln, and about 312km or 3h20m south of Port Augusta.

I actually camped slightly down the dirt road from where the campsite is marked on WikiCamps; I think it’s safe to park most anywhere along Trinity Haven Road, so long as you’re off the actual road.

Access: No 4WD needed, despite some of the reviews grumbling about the road in (I found it fine)

So for some reason, I’m unable to find this campsite on WikiCamps 6 months later, but I swear it’s legit! It’s close to the Whalers Way campsite, but on the other side of Fishery Bay at the end of Whaling Station Road.

There are a couple of dirt car parks off of dead-end Whaling Station Road, both of which offer lovely views of Fishery Bay and its beach as well as a nearby wind farm. You can get away with camping in your vehicle here, but I wouldn’t recommend pitching a tent or parking a big rig here. 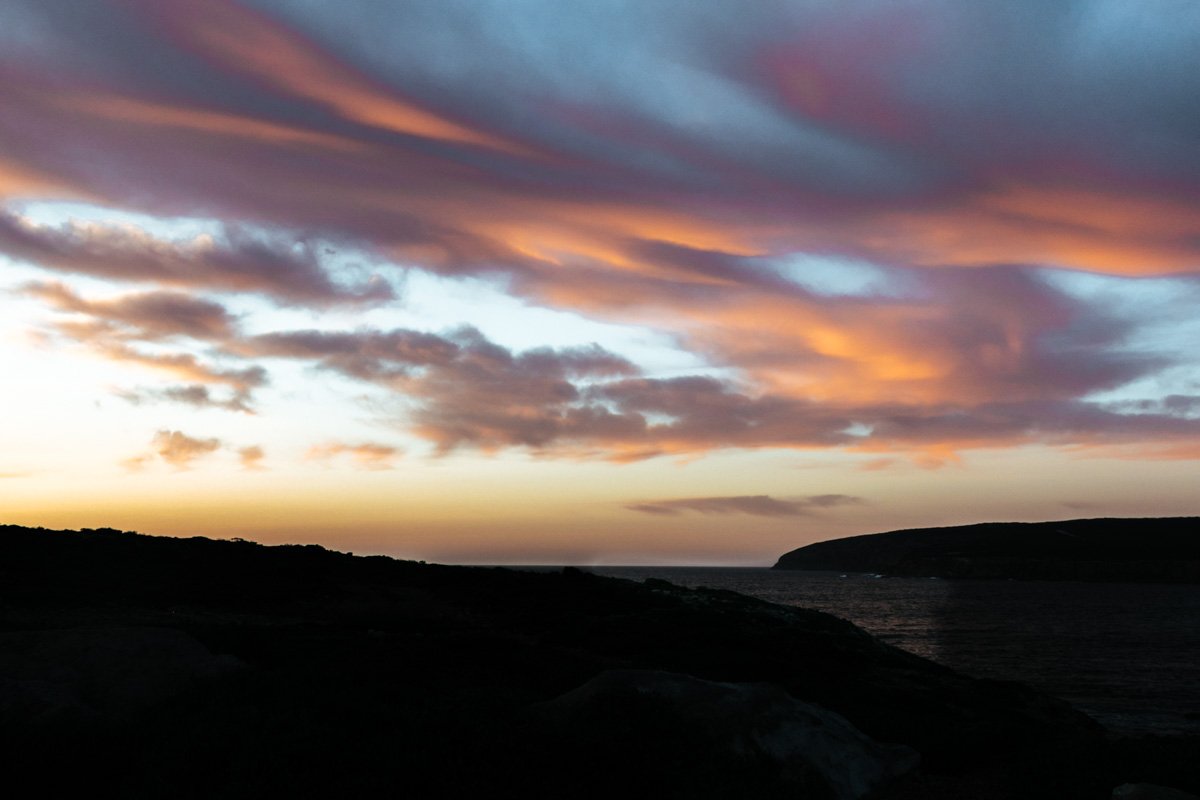 This campsite is fabulous for stargazing as well as watching both sunrise and sunset over the water. For sunset, you can kick back and watch the show happen right over the beach from your campsite.

For sunrise, you can walk out to the cliffs by following the dirt walking path from the end of Whaling Station Road and watch the sun come up over the ocean. This was the only spot where I had a tiny bit of Telstra signal on my phone (as opposed to absolutely none at the campsite). 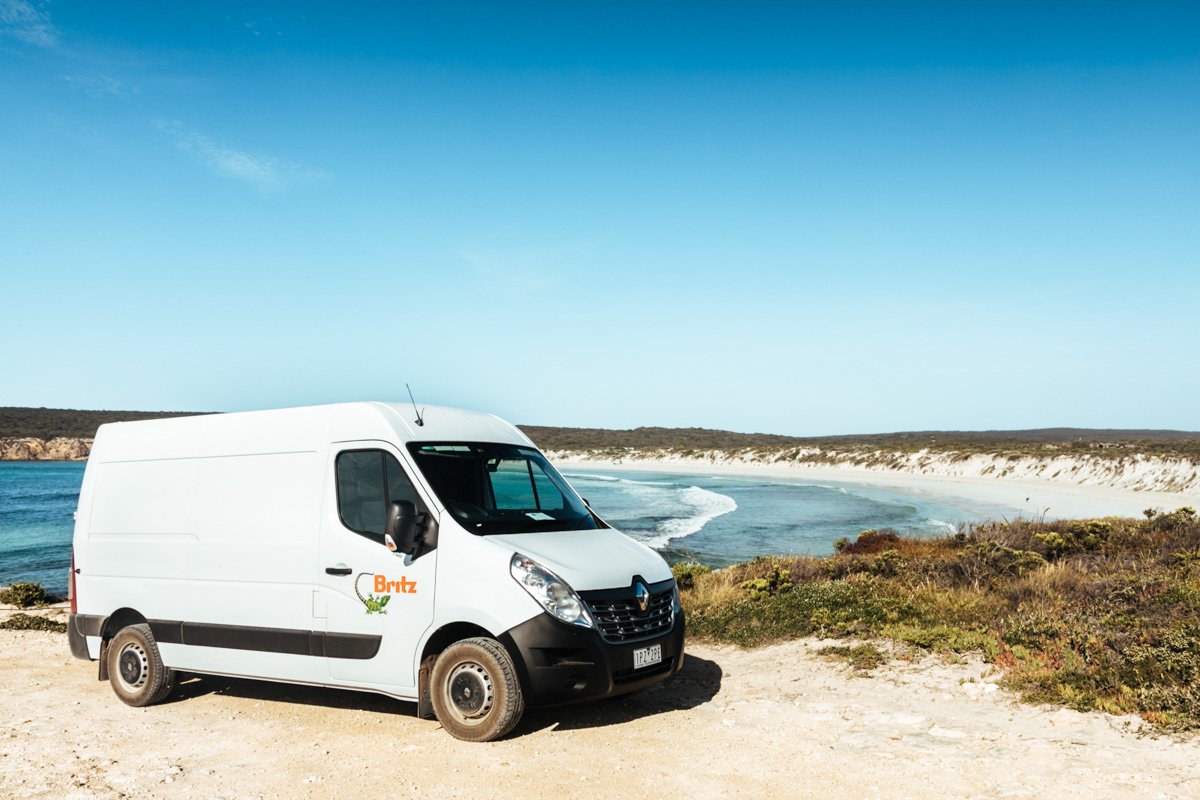 Type of Camping: Cars only

This is the only campsite mentioned here that isn’t free, but I loved it so much I felt the modest fee was well worth it!

Walkers Rocks Campground sits on the west coast of the Eyre Peninsula, just north of Elliston. It’s very easy to access and consists of a big dirt parking lot, with a couple of dead end tracks off of it where people can camp. When I was there in early November, the March flies were horrendous around the wooded campsites, so I just parked my van in the open parking lot and stayed the night there.

Part of why I loved Walkers Rocks is because there was an outdoor shower available to use (and at that point I really needed a shower), and plenty of rubbish and recycling bins (which I also needed to dispose of my growing stash of waste).

But the BEST part of camping here was being steps away from this beautiful white sand beach! 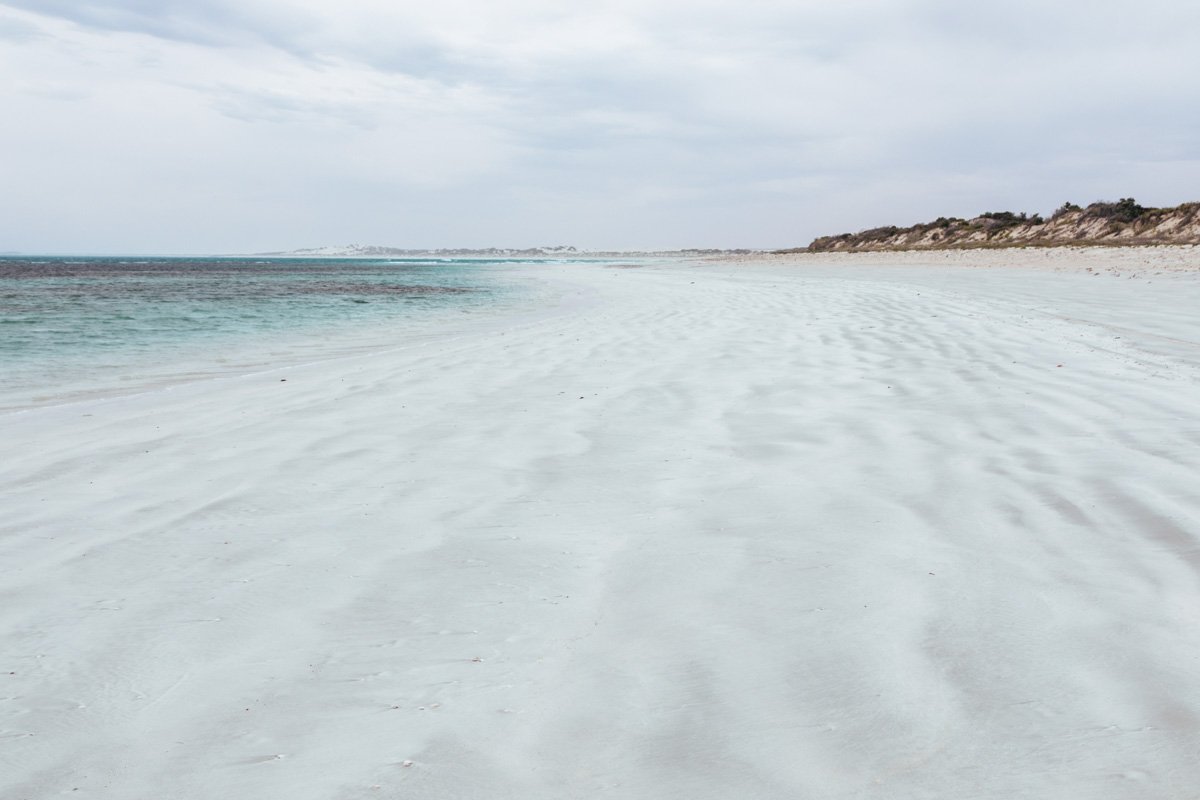 This beach is accessible via the parking lot. The sand on the beach itself is flat enough to run or drive on with ease, and long enough that you can walk quite far down the beach.

Alternatively, you can access the neighboring beach via a path in the sand dunes by the campsites, which is smaller and not so white.

PS – Apparently you can see DOLPHINS here sometimes! (Or so say the reviews in WikiCamps) 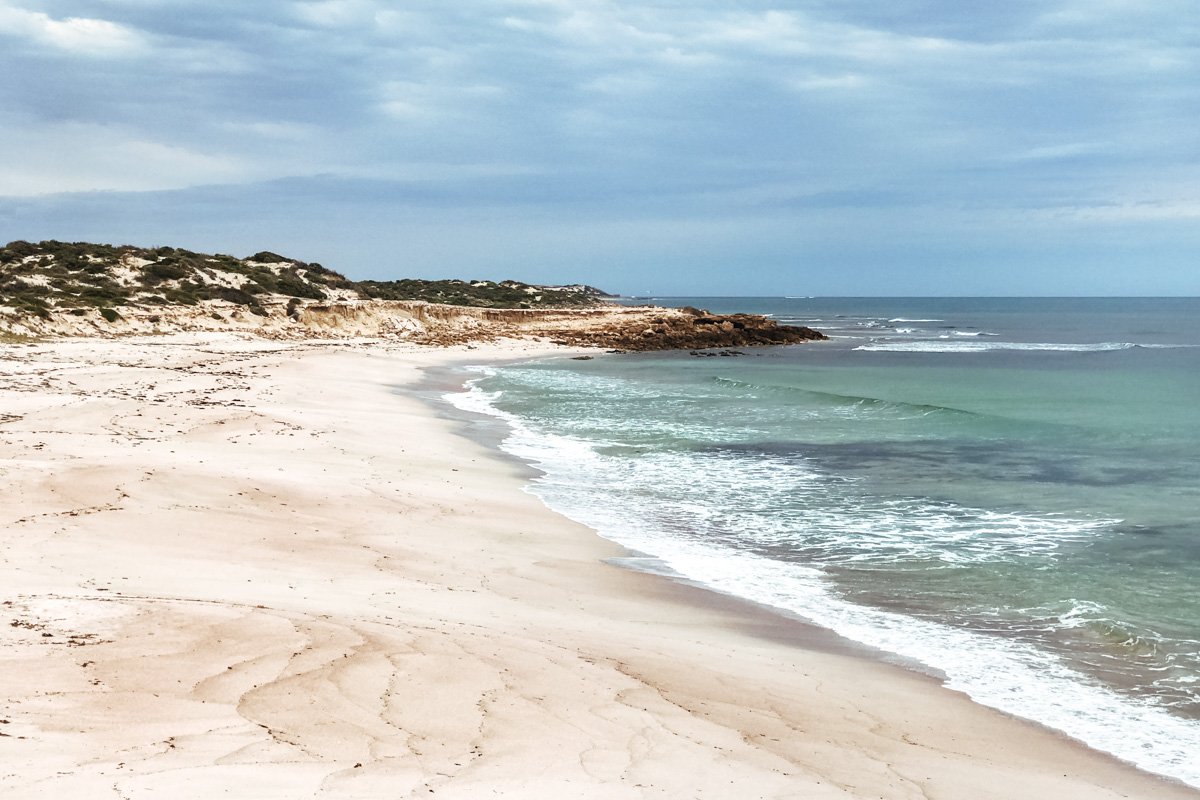 Cost: $10/night per vehicle (put money in an envelope and drop in the donation box) 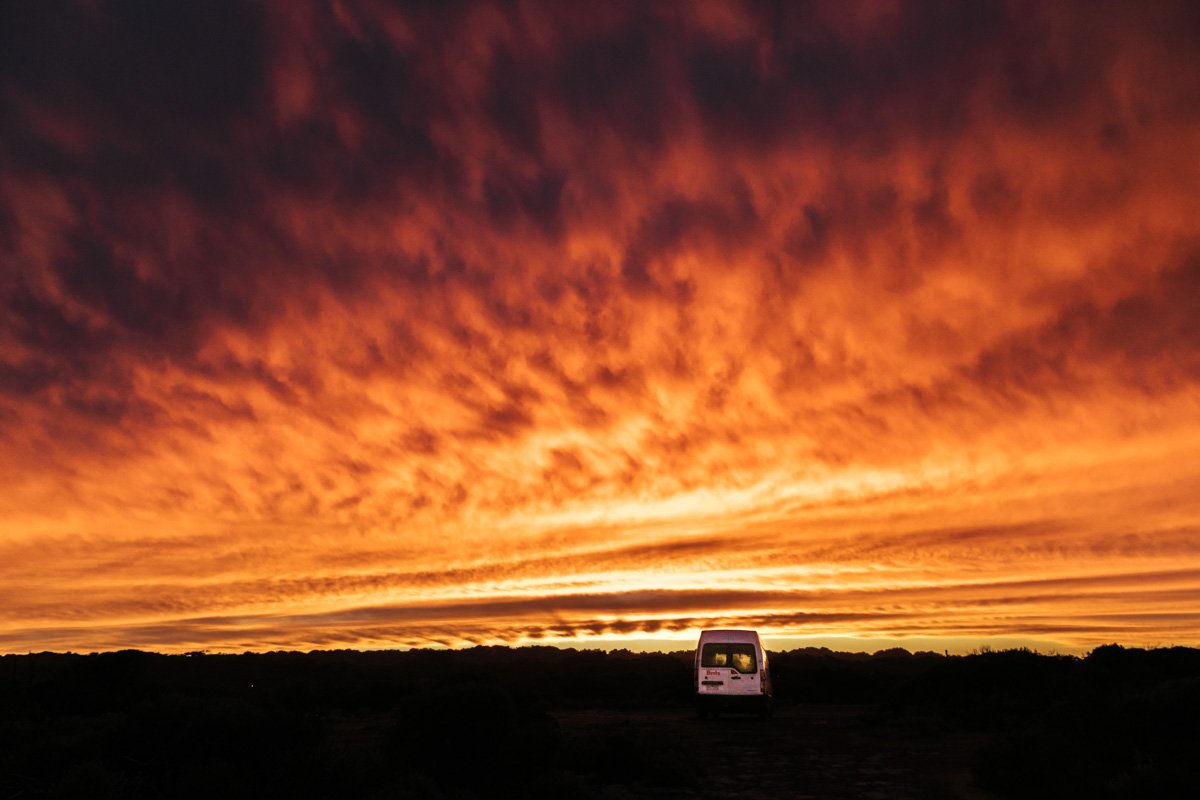 My warm fuzzy feelings for this campsite may be slightly influenced by the EPIC sunset I caught as I was driving in and setting up camp. No joke, it was one of the best sunsets of my entire LIFE – and I could tell it would be a special one just by the light and the clouds that were out during golden hour. 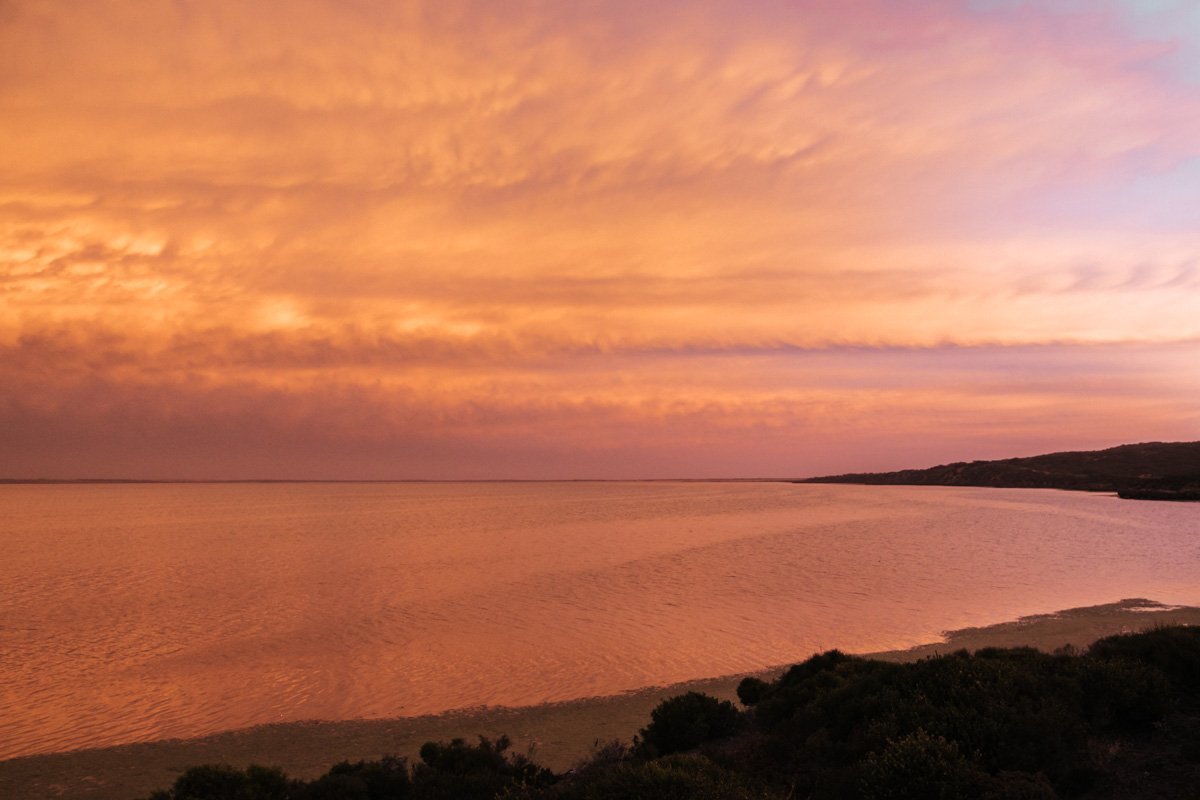 Fortuitous sunset aside, this campsite is a convenient place for an overnight stop close to the Point Labatt seal colony. It’s just a patch of land off of Point Labatt Road with a dirt track leading to a few other patches where it’s clear others have camped before. Point Labatt Road is quite bumpy in parts, but my van had no trouble driving on it.

There’s not much traffic around during the night, and the site is right on a peaceful little inlet that looks more like a lake. The town of Baird Bay (where you can swim with seals!) sits on the other side, but a bit too far away to see from here. 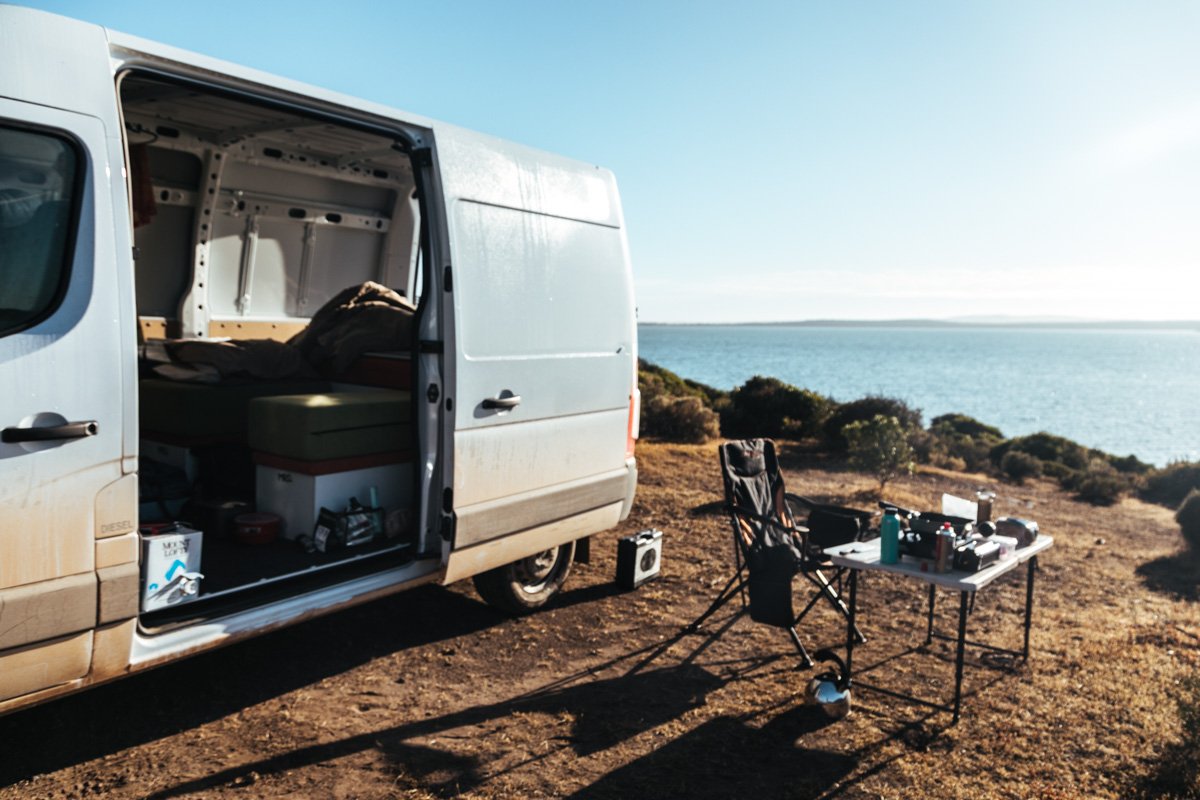 If strong winds don’t deter you, then you’ll love camping at the Cape Bauer Lookout. There are several little nooks in the sand dunes around the lookout that are fit for camping (I saw a few other vehicles set up for the night when I was there).

I parked at the very end of the dirt road so that I could enjoy this fabulous view of the sunset from my van: 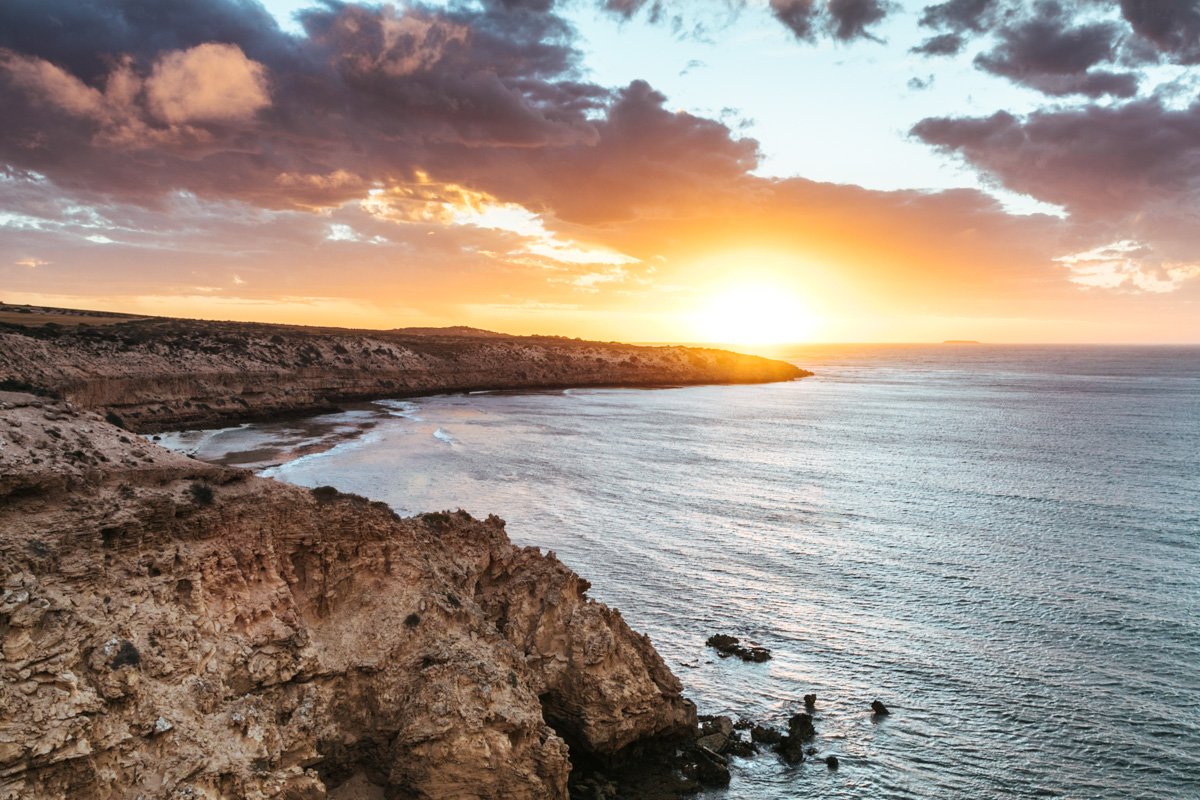 This campsite is great for its rugged, remote feel and proximity to the picturesque cliffs, but as I alluded to: it is VERY WINDY. Like the kind of windy where you struggle to open the car door.

And of course, you’re up on top of the cliffs, so you won’t be able to roll out of bed and go for a stroll on the beach – for that, you’ll need to drive further down the road. But still, this campsite is a beauty. 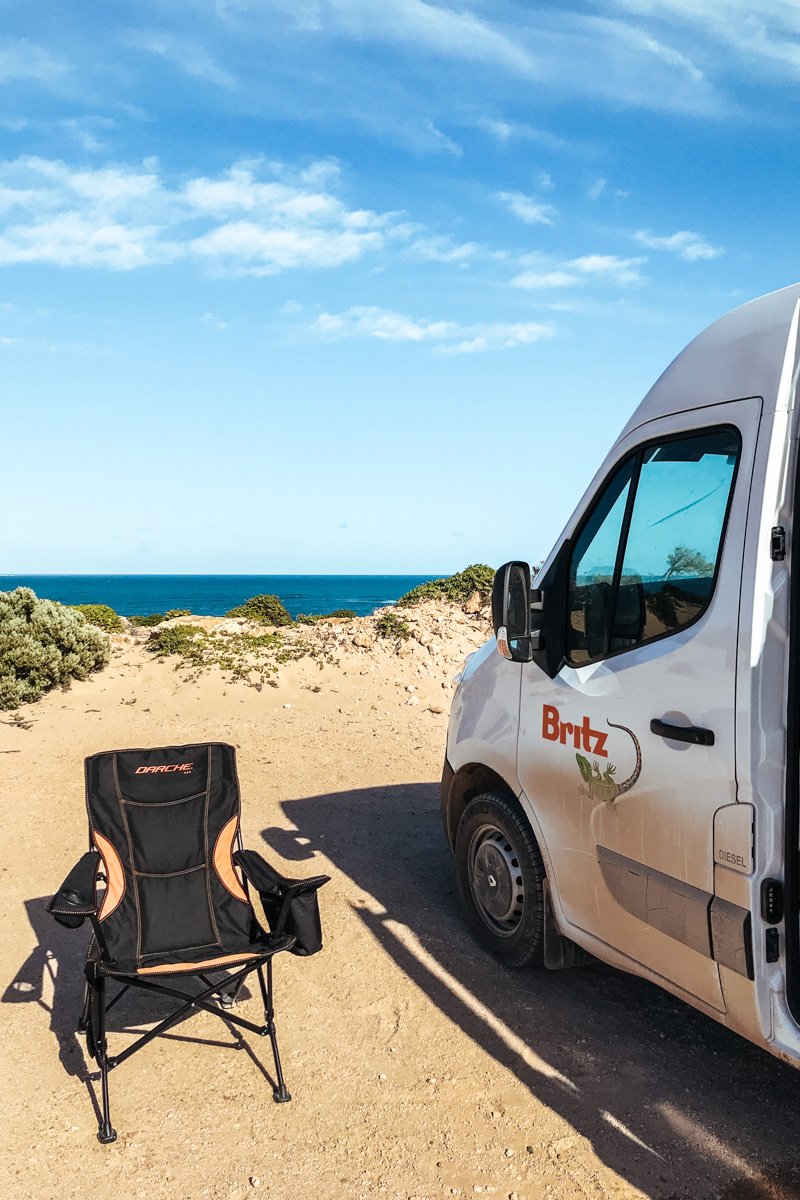 Type of Camping: RVs, caravans, cars, tents (in the sand) 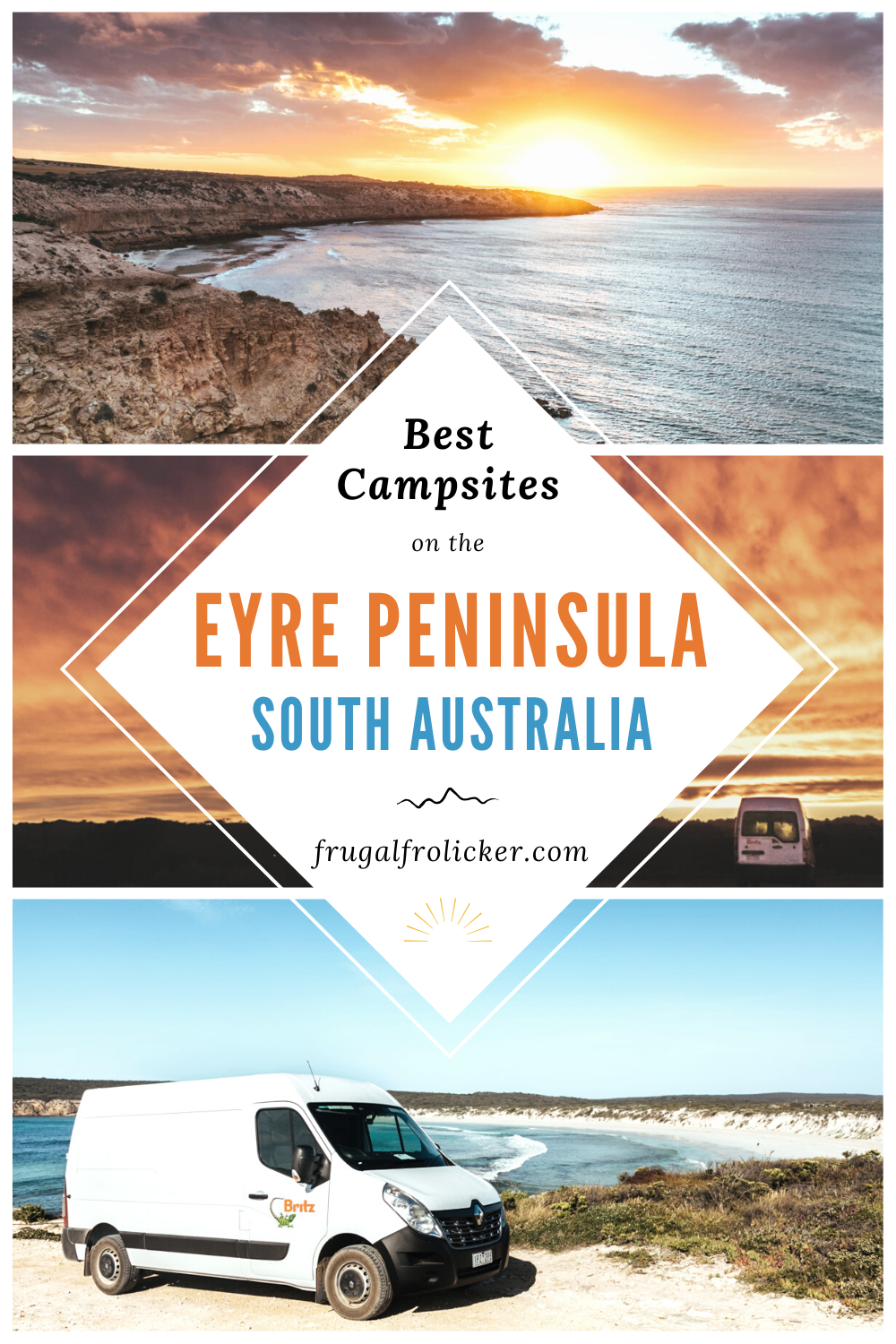 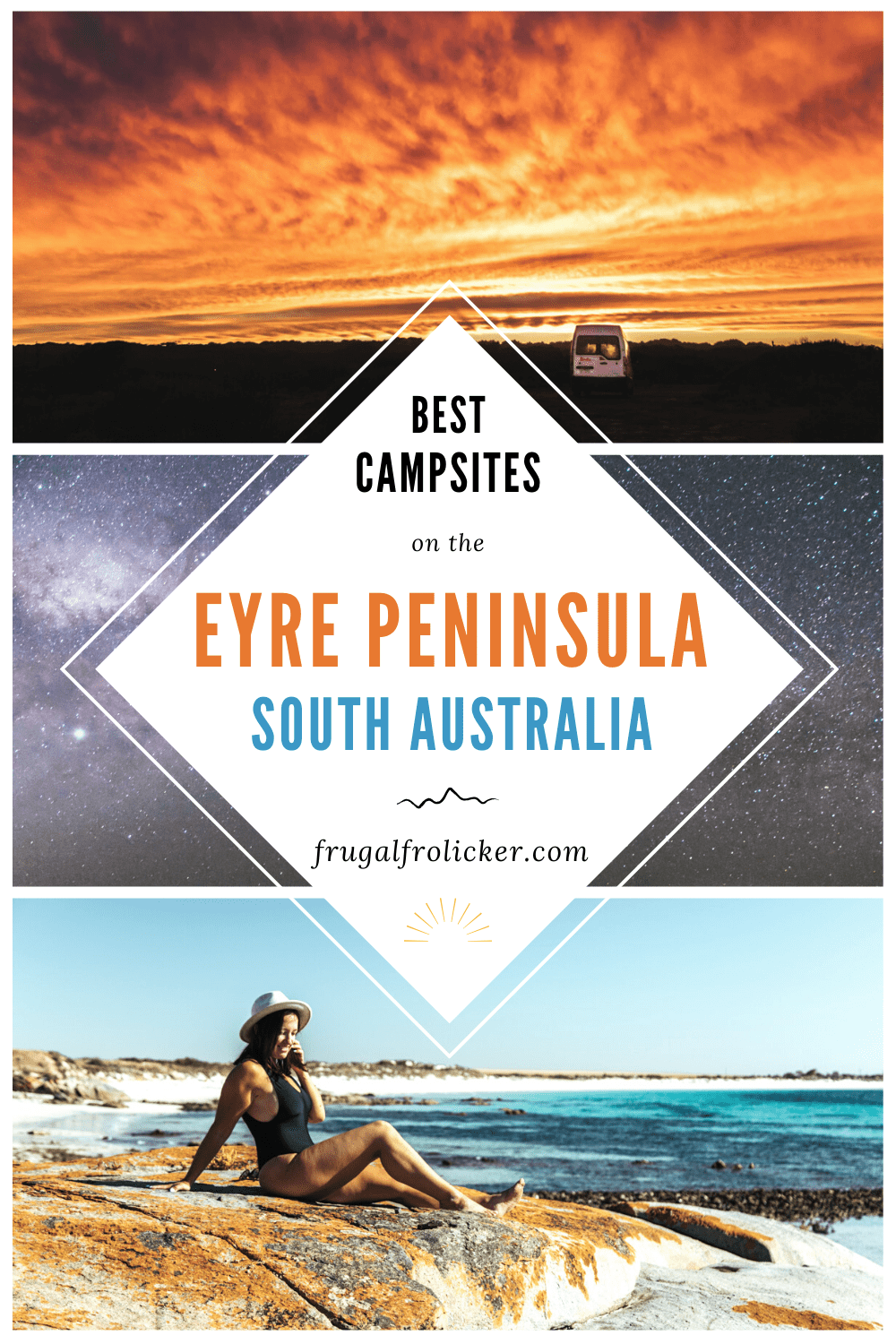 Tags: AustraliacampingEyre PeninsulaSouth Australia
Previous Article7 Things To Know Before Your Overnight Or Day Trip To Rottnest Island
Next Article So, About Those Grand 2020 Plans…