By on Asia Vietnam

I normally write about all of the awesome things I’ve seen and done while traveling and try to convince YOU to do the same someday.

But not this time. This time, I’m telling you what NOT to do when you’re in Vietnam: Do NOT book the Cu Chi tunnels tour.

It’s a classic example of why you should always go with your gut. I never had any desire to visit the Cu Chi tunnels, but I figured it was something I *should do* while in southern Vietnam – so I booked one of the Vietnam tunnel tours from Saigon. You can either visit Cu Chi, or opt for a trip that visits both Cu Chi AND a Cao Dai temple (a very unique and colorful structure). I’m a sucker for church architecture and vibrant colors, so I chose the latter.

First, you should know that Cu Chi and the Cao Dai temple are not at all near each other, which means you’ll spend most of the day on the bus. And by bus, I mean the cramped minivan clearly designed to hold tiny Vietnamese people, with no AC, on a ridiculously hot and humid day.

Second, you’ll spend the remainder of the day being herded and rushed around the sites:

On the way there, we stopped at a local gallery disguised as a rest stop, where we had to walk through an art factory to get to the bathrooms. I’ll admit it WAS interesting to see people working on egg shell mosaic paintings at all stages of the process – but in the end, it’s mostly to entice you to buy some paintings. Or some snacks. Or coffee (yep, guilty). Throw in the fact that you’re there with a couple of other busloads of tourists and the whole thing just felt like a tacky tourist trap. 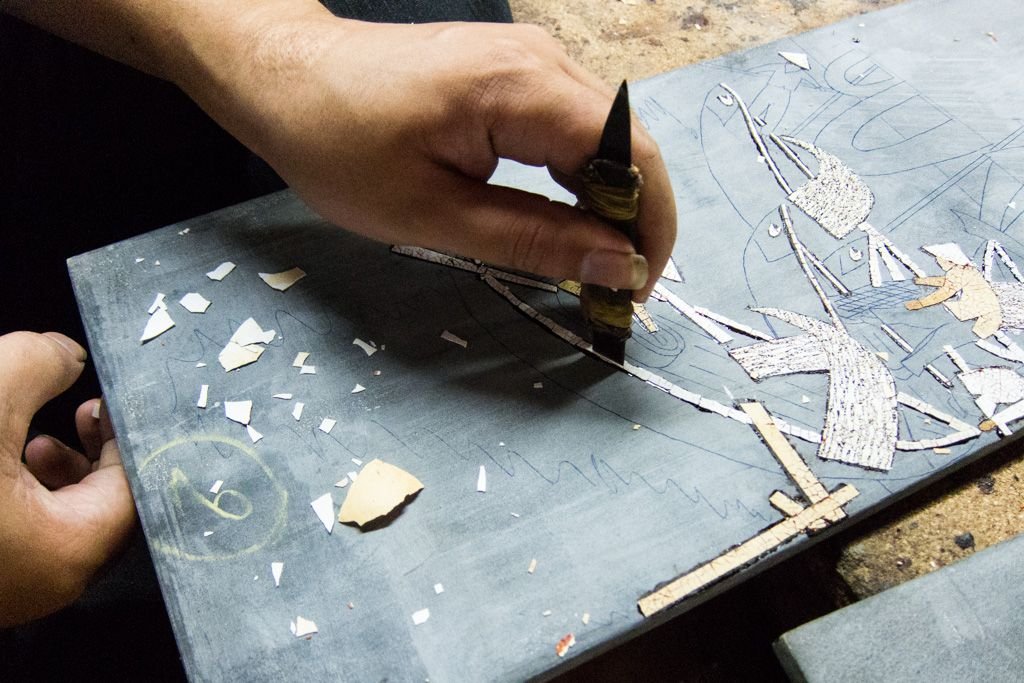 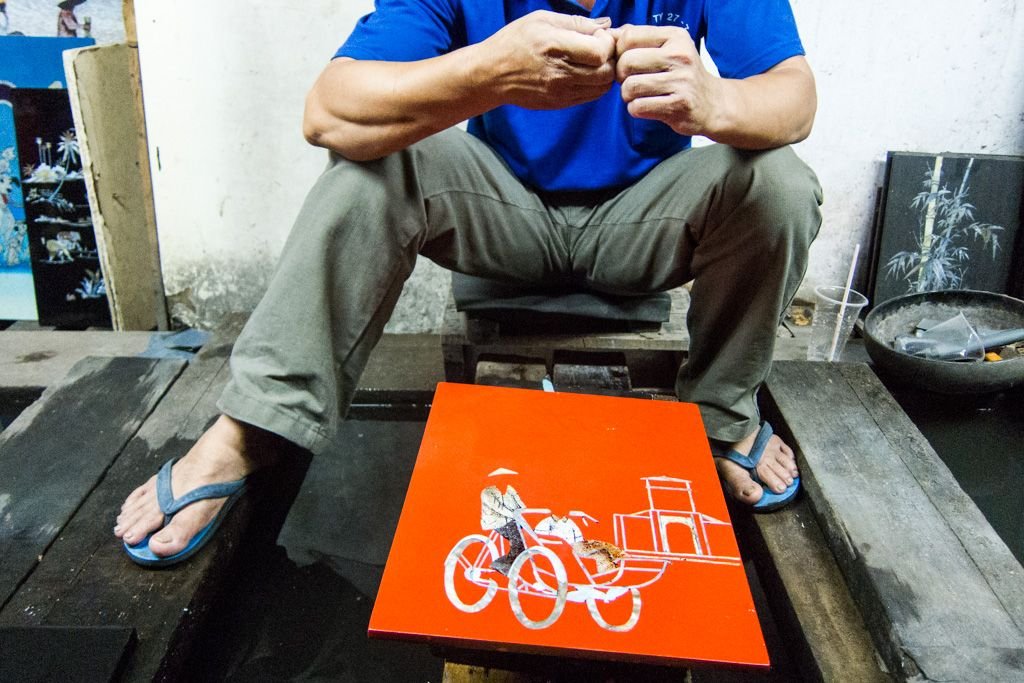 I was most looking forward to seeing the colorful temple at Cao Dai, but much to my dismay, we arrived and our guide announced that we had to be back on the bus in 20 minutes. Are you for serious?! Half of that time would be spent walking to/from the temple, meaning we had a whole 10 minutes to look around the church. We spent more time at that “rest stop” than at one of the attractions advertised on this tour. 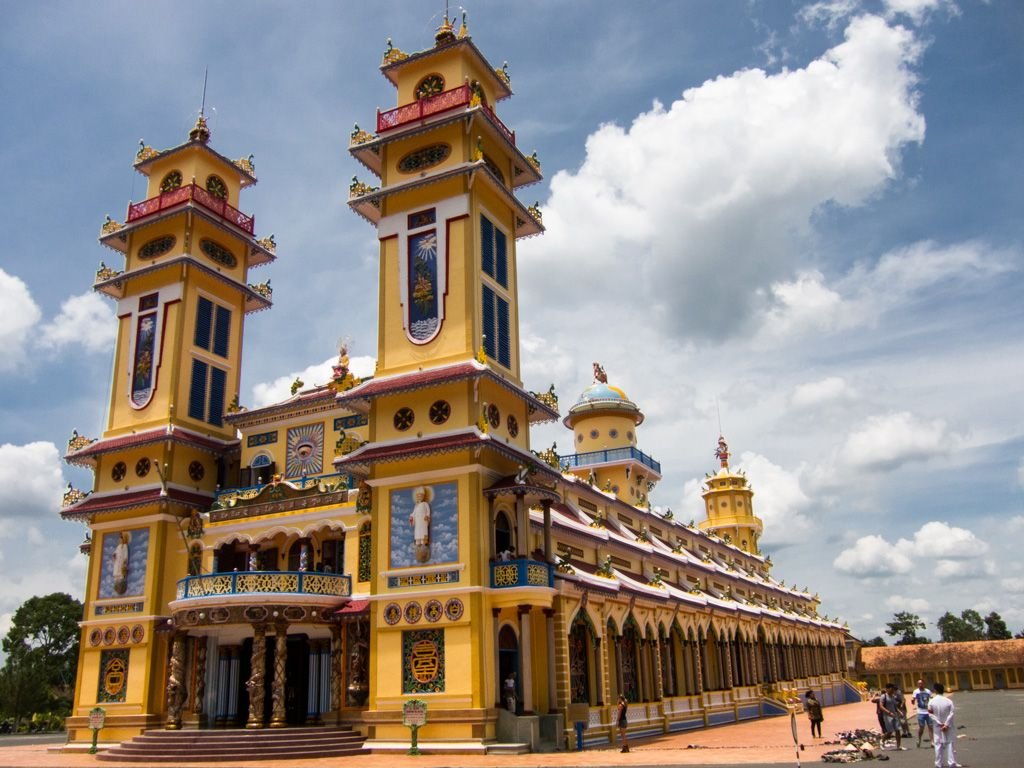 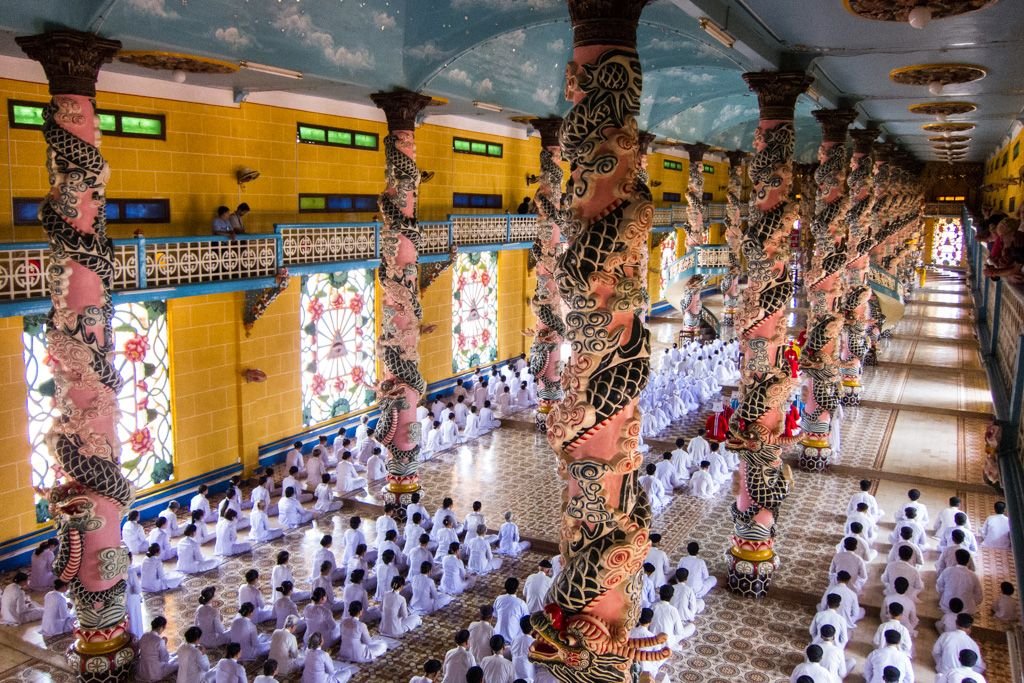 And to add insult to injury, we were all herded around the temple like cattle. I stopped for a few seconds to take a picture from the balcony and was immediately told to keep moving. If there’s anything I hate, it’s being rushed – ESPECIALLY when it comes to traveling.

We arrived at Cu Chi later in the afternoon for our Vietnam tunnel tour, which was nice because it wasn’t overrun by crowds at that time. It was still disgustingly hot though as we trudged from site to site at Cu Chi. It started out with a brief film which made it all too clear that Vietnam is not too fond of America – understandably so, considering what damage we caused in the war. But when every other line in the film highlights what atrocious things the Americans did during the Vietnam War, it gets old pretty fast. It’s not too enjoyable listening to a one-sided story that belittles your nation. The anti-American propaganda was just ridiculous.

Next, we were shown one of the trap doors in the ground that was used by the Vietnamese to hide during the war. Each person from our group then took turns jumping into the hole, crouching inside, and posing for photos. We all had to stand there and watch a series of at least 20 trap door photos being taken. :: cue the snoozefest :: I opted out of the trap door photoshoot. 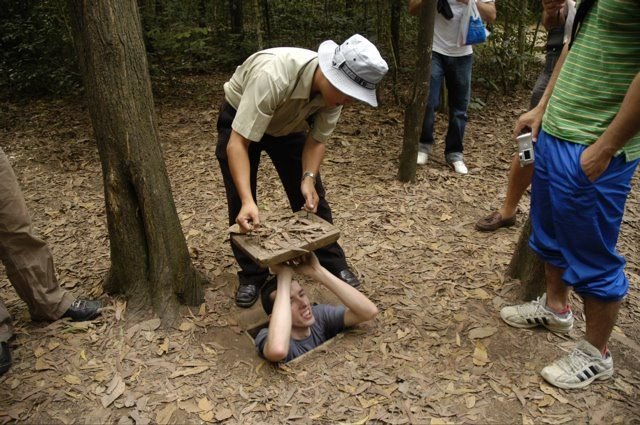 Further into the woods, we walked past the trenches and then stopped at some old shelters with statues reenacting scenes from the war. As riveting as it was watching fake people create booby traps, I shuffled along to the next attraction: an old American tanker. And apparently it was time for our second photoshoot of the day, as people took turns climbing up onto the tanker and smiling for the camera. At this point, I was just so fed up with the whole thing. I’m sorry, but it’s just not funny to run around posing with a cheesy smile in front of things that were used to massacre a nation. I don’t understand why it’s a thing that tourists do here. Am I missing something?

I was actually looking forward to getting to go through one of the tunnels, but it was such a short segment that we barely spent any time in it at all. It’s extremely narrow – and actually, it was widened to accommodate westerners, if you can believe that. If you find yourself freaking out down there, there are a couple of exits along the way that you can take to go back above ground. This is far and away the most rewarding part of visiting Cu Chi. It’s so nuts to picture soldiers a). Constructing such an intricate underground network of tunnels, and b). Hiding out in them for months. How did they do it?! Much respect. 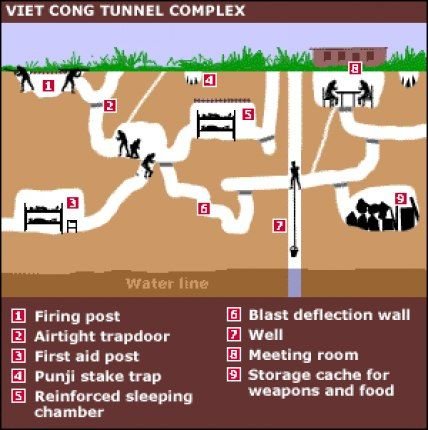 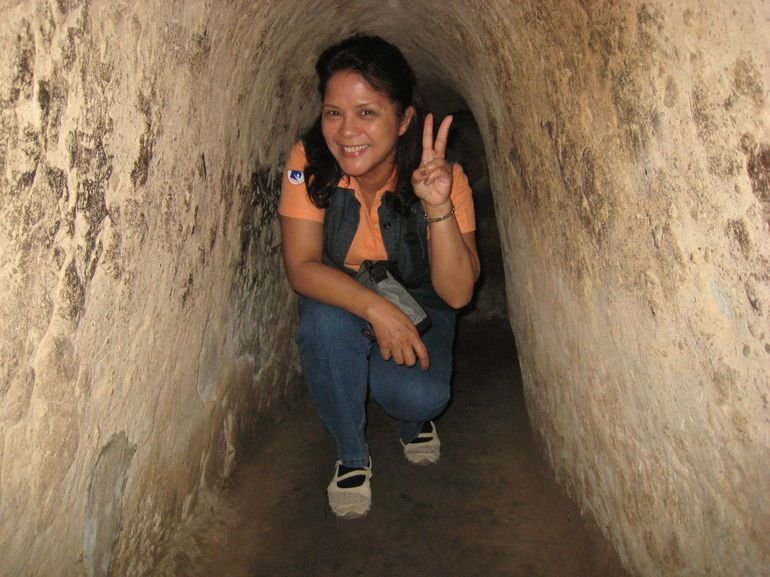 NOT ME. Photo credit: viator.com

I do not recommend booking the Cu Chi Tunnels tour day trip from Saigon. Too much time is spent on the bus, and too little time is spent at the sites. Furthermore, it is a far from optimal experience to visit these places as part of a large tour group, as you’ll be herded around with a bunch of tourists. If you want to learn more about the war, it’s far more worthwhile to spend time at the War Remnants Museum in Saigon. And if you’re intent on seeing these sites anyway, I recommend looking into private tours or hiring a taxi for the day.

If you’re still keen to take this tour, you can book a Cu Chi Tunnels tour at any of the tourist offices on Pham Ngu Lau (the main backpacker street) in Saigon for 147,000 VND ($7 US).