With as many international travel adventures as I have under my belt, it is straight up STUPID how little domestic travel I’ve done in comparison. Apart from sporadic jaunts out west or around the northeast, I’ve hardly seen any of my own country – and that’s just unacceptable!

In an attempt to rectify this, so far I’ve done good on my 2014 resolve to travel more locally. I spent a long weekend camping and hiking in Utah, a day checking out the cherry blossoms in Washington DC, a work trip turned getaway in San Francisco, and most recently: BlogHouse in Chicago. 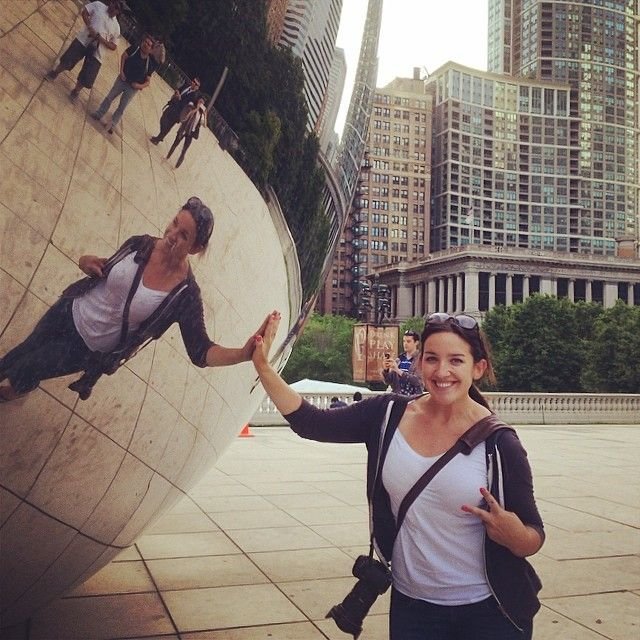 Ahh, Chicago. Why oh why did it take me THIS LONG to visit for the first time?! I knew it would be great, mostly because I’ve heard nothing but glowing reviews from others who have been there. But even more telling is that the locals feel the same way. Every Chicagoan I met was bursting with love for their city – no one had a single negative thing to say (though I’m sure if prompted, they’d admit that they could do without Chicago winters). But even during my honeymoon phase with NYC, I’d openly lament plenty about my city: the MTA, the crowds, the rent.

As I frolicked around Chicago for the first time this spring, it was easy to see that there’s plenty to love about it. Here’s a quick look at what I got up to, courtesy of my Chicago instagram feed:

I’m convinced that the best way to spend a warm sunny day in Chicago is on the lake. The fancier folk might opt to take their boat out on the lake, but I’d prefer to hang out at the beach. Yes, there are beaches in the city, and I’m still not over it. The water looks questionable, but plenty of people swim in it so it must be alright.

My favorite lakeside activity has to be biking (I know, shocker!). I rented a Divvy bike and rode from just south of the Navy Pier down toward the University of Chicago. The path goes along the waterfront, then heads inland through some parks and wooded areas. I highly recommend a late afternoon ride as the setting sunlight turns everything golden! 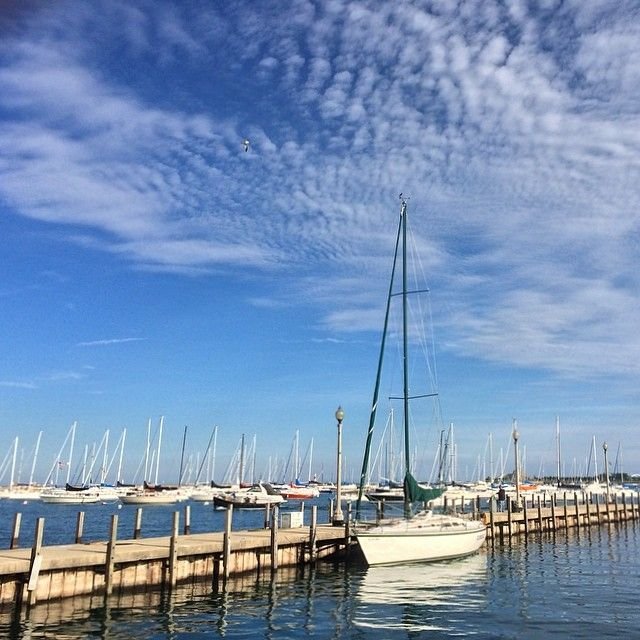 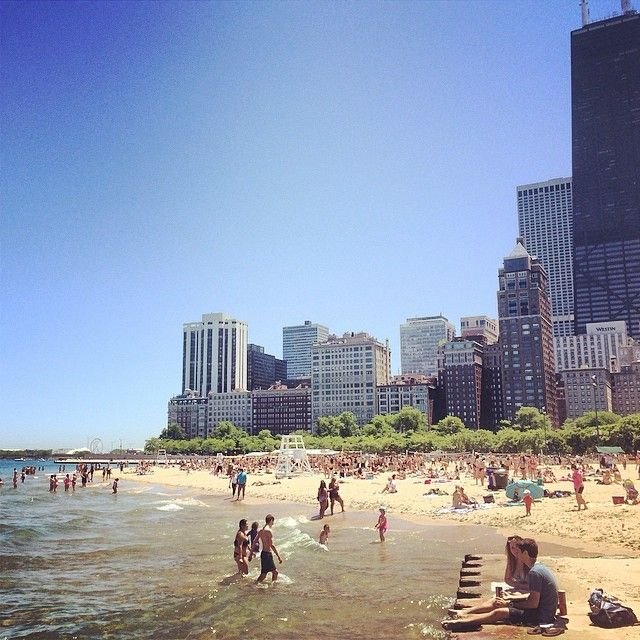 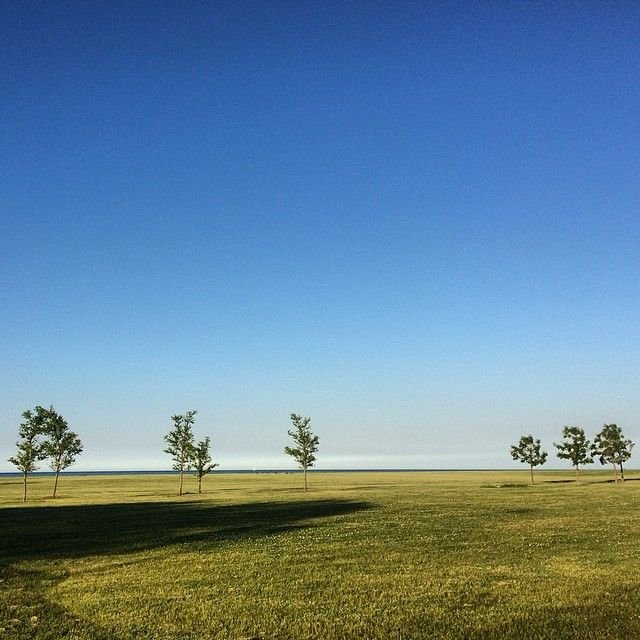 Architecture is kiiiind of Chicago’s thing, and thankfully there are several places where you can admire the buildings from above. This time around, I opted for a trip up to the Skydeck at Willis Tower and drinks at Vertigo Sky Lounge (at the Dana Hotel). While the hotel bar was a fun place to grab drinks and tapas, it’s hard to beat sweeping 360-degree views from the tallest building in the Western Hemisphere. 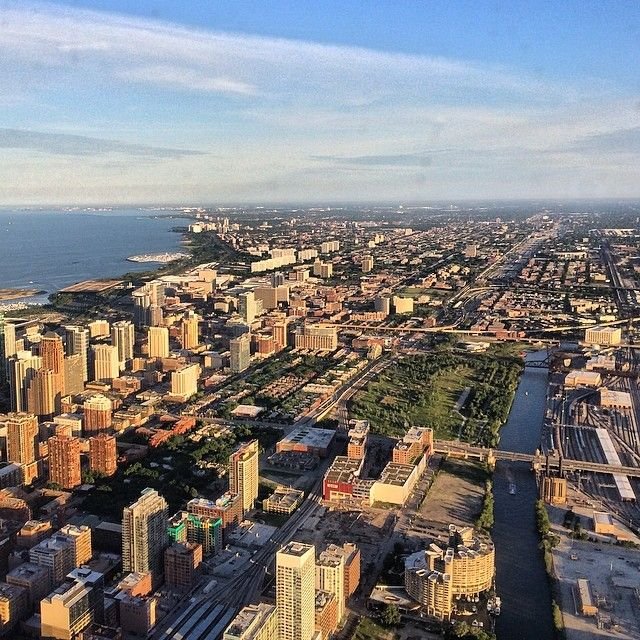 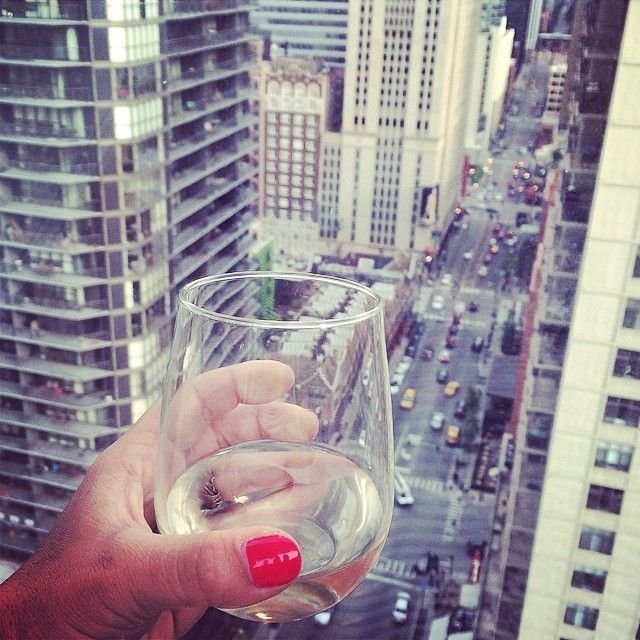 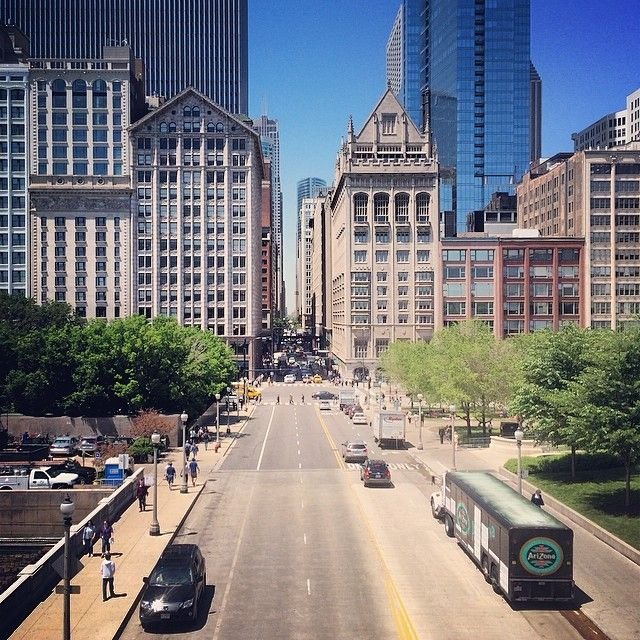 The Food (and Drink)

I’m not a foodie. I don’t blog much about food. Basically, I eat to live – not vice versa (I know, it’s crazy). But I bend my rules a bit when I travel, because I often feel like I have to try the food that a place is known for after hearing all the hype about it.

Chicago = deep dish pizza. DUH OF ALL DUHS. I don’t think I knew what deep dish actually was before ordering it, but when it was placed in front of me at approximately 10:30pm after a long day of frolicking and not eating much at all, I went absolutely HAM on it. When I finally threw in the towel with just a small slice left, the waiter was like “damn, girl!” (direct quote, mind you).

After inhaling it, I took a moment to register what I’d just eaten: A thin crust, a thick layer of cheese, some sauce, and a bit of sausage as a top layer. Cheese comprised at least half of the volume of pizza I consumed, which is absolutely disgusting if you think about it for more than a few seconds. 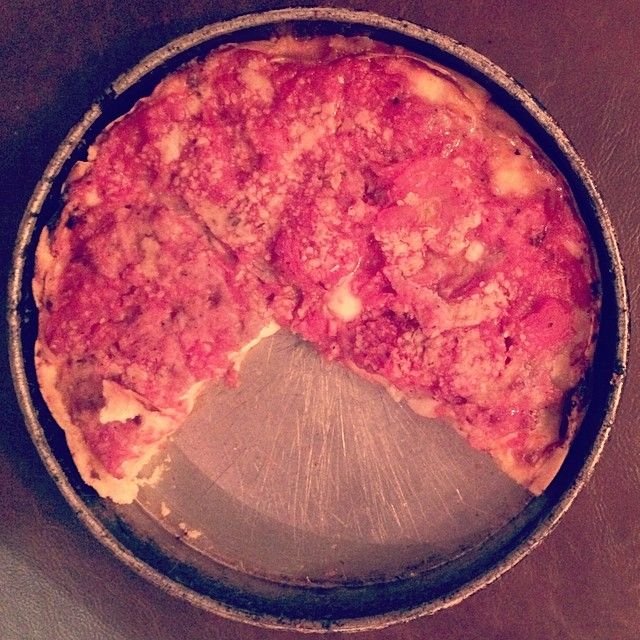 Also, COFFEE. I didn’t get to delve too deep into Chicago’s coffee scene thanks to the proliferation of Intelligentsia there. Between having a cafe within 5 minutes of the hostel I stayed at and having a specially-roasted blend of Intelligentsia beans at the B&B that hosted us for BlogHouse, I basically drank nothing but Intelligentsia coffee in Chicago. It’s fast approaching the ubiquity of Starbucks in this city and I LOVE IT. 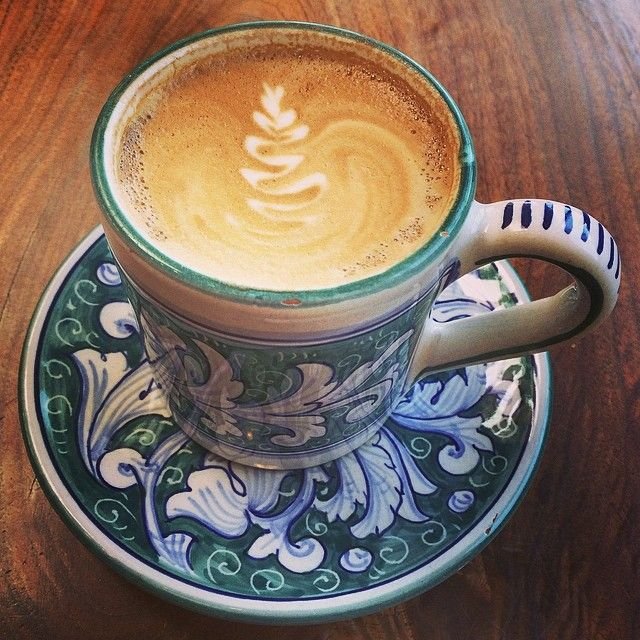 On a tip from a Chicagoan, I ventured to Pilsen one day in search of murals and tacos. This Mexican neighborhood has both in spades.

To see a whole lot of street art in a very concentrated area, walk along the train tracks on W 16th Street. Murals for DAYS. And for deliciously cheap tacos and horchata, pop into Nuevo Leon where you will inevitably want to eat ALL OF THE MEXICAN FOOD. 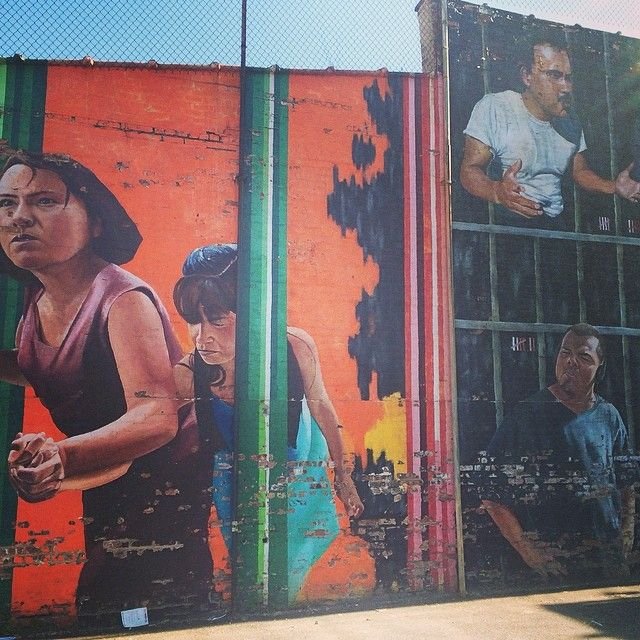 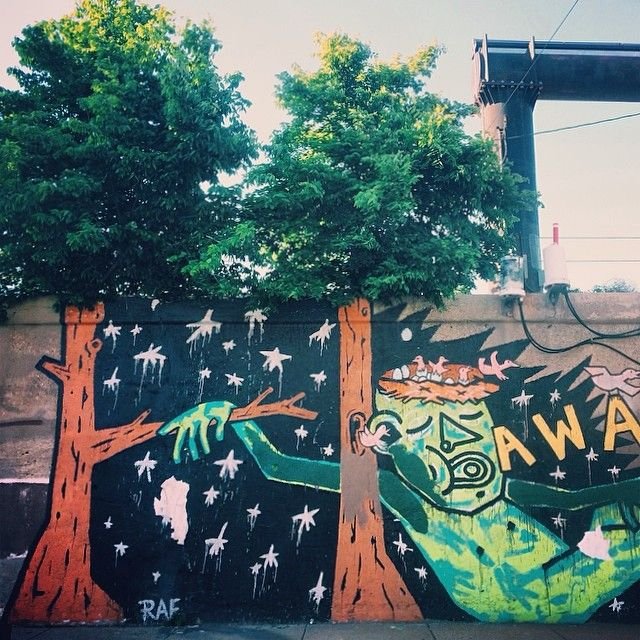 I knew about the lake, but somehow it didn’t register in my mind that Chicago is also blessed with a river that runs through the city. And where there’s a river, there are usually bridges – and you know how I feel about bridges, right?

An absolute must-do in Chicago is a boat trip down the river. I’ve heard great things about the architecture tours, but we opted to captain our own boats with Chicago Electric Boat Company. Akin to a Choose Your Own Adventure ride, we navigated up and down the river, turning whenever we felt like it. We passed beneath SO MANY BRIDGES, and it took me right to my happy place. 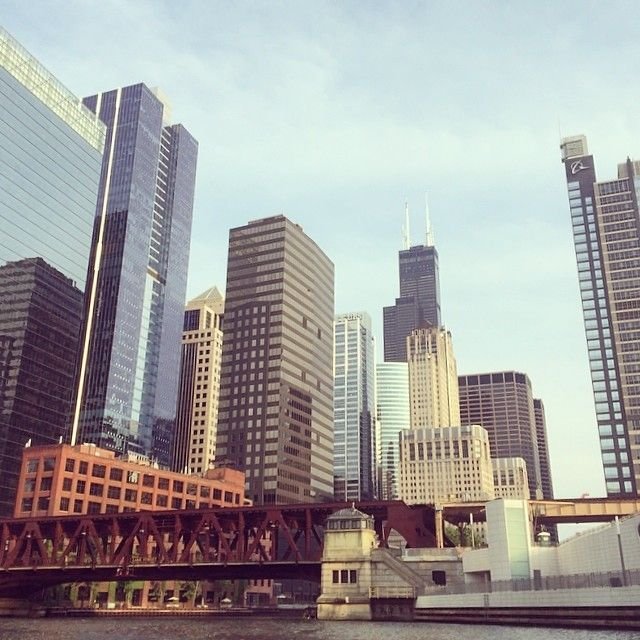 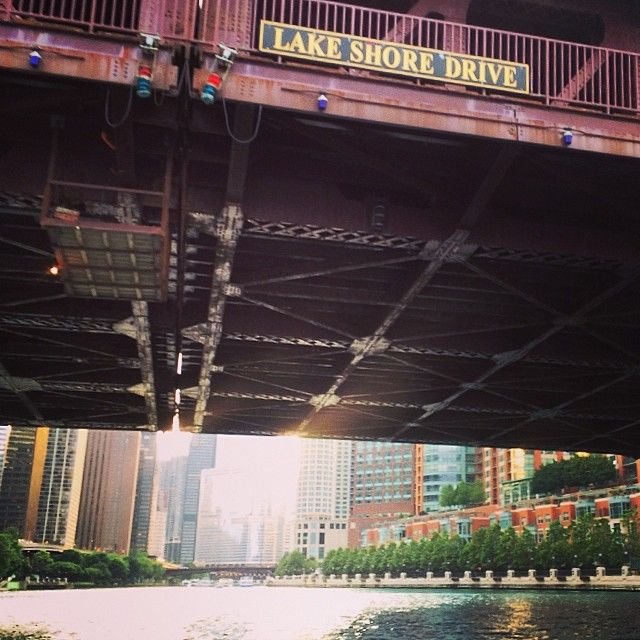 I’d be remiss if I didn’t mention the BlogHouse portion of my Chicago trip, which took place primarily in Lincoln Park, a lovely neighborhood north of the river. We stayed at the beautiful boutique mansion of Villa d’Citta, which had more than enough to keep us occupied – consequently, I didn’t spend much time exploring the ‘hood. Another reason to come back to Chicago sometime soon! 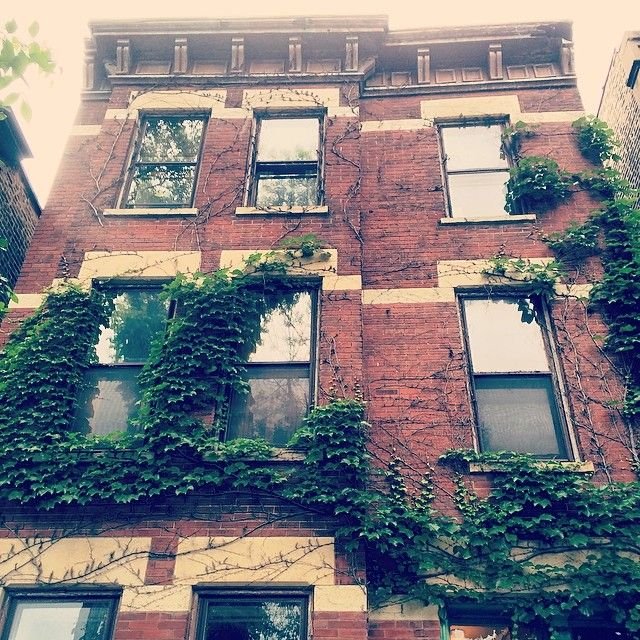 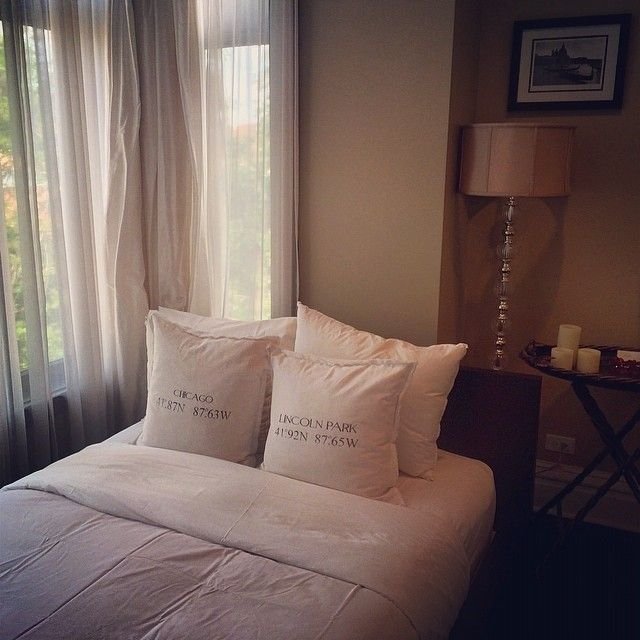 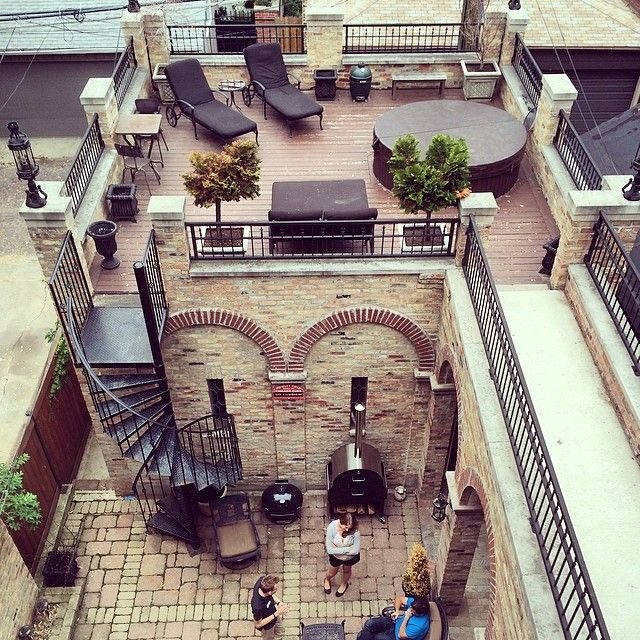