This is a guest post by James and Lee of The Travel Scribes.

When James Cameron flew over the soaring mountains of Zhangjiajie National Forest Park, he must have been overwhelmed by the magnificent, mythical beauty; an almost otherworldly place that somehow defies description. Because it was with Zhangjiajie and the so-called Hallelujah Mountains in mind that Cameron envisioned the world of his blockbuster film hit, Avatar, and the legend of Zhangjiajie was told in technicolour brilliance for millions to see.

It was with dreams of these towering finger-shaped formations that we found ourselves venturing on a slightly dingy, definitely overpacked train from commuter city Changsha to the town of Wulingyuan, which is actually the starting point for this now-famous national park.

We wanted to channel Cameron’s enthusiasm for the area, in what we thought would be a few days of mild hiking in Zhangjiajie National Forest Park. What ensued was a slightly different tale. 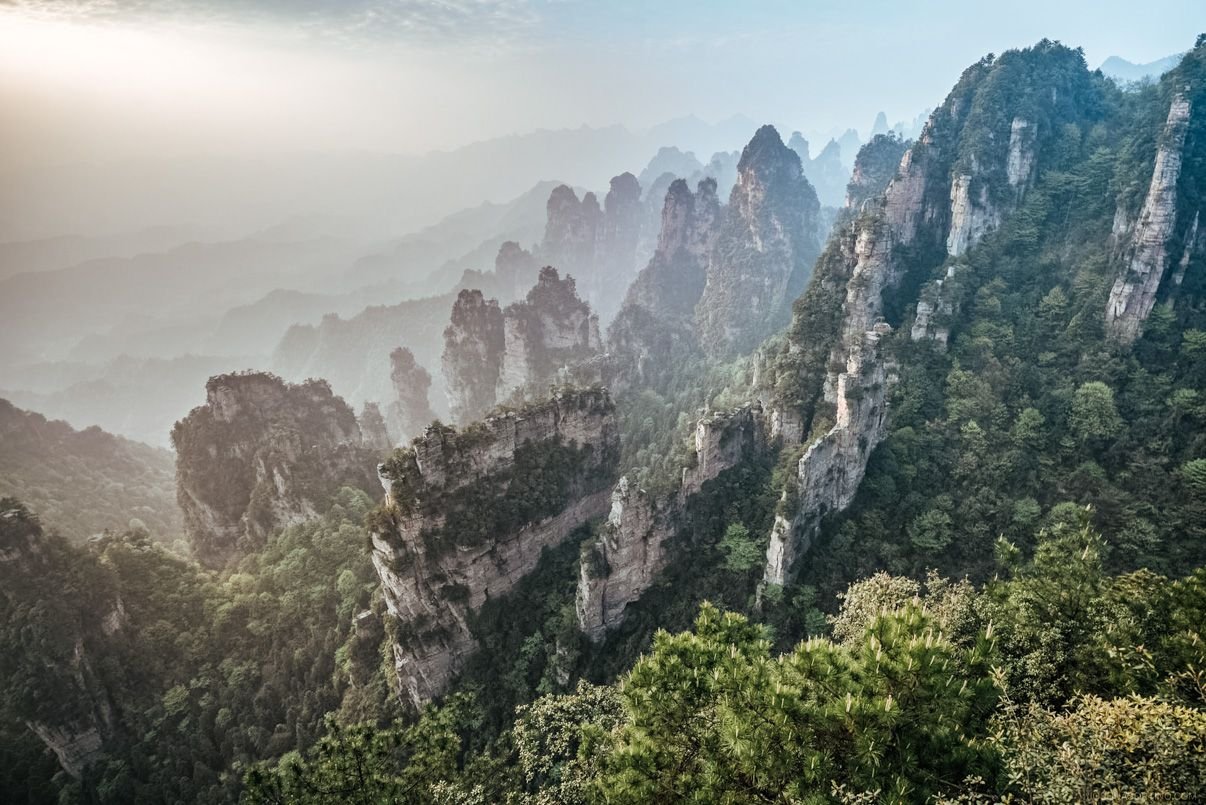 Photo by Joshua Sortino on Unsplash.

What’s in a Name?

First up, it’s worth mentioning that Zhangjiajie, the name now synonymous with this spectacular region tucked away in the Hunan province of China, is not exactly right.

The key thing to know is that Zhangjiajie is a pretty busy city of over a million people, which is definitely not what you expect when you’re planning three days of hiking in a ‘deserted’ area. And, actually, if you want to explore this incredible area, you better book a room in Wulingyuan, because it’s a cuter smaller town and being right next to the entrance, and that’ll help with the early morning starts to beat the queues hiking Zhangjiajie. 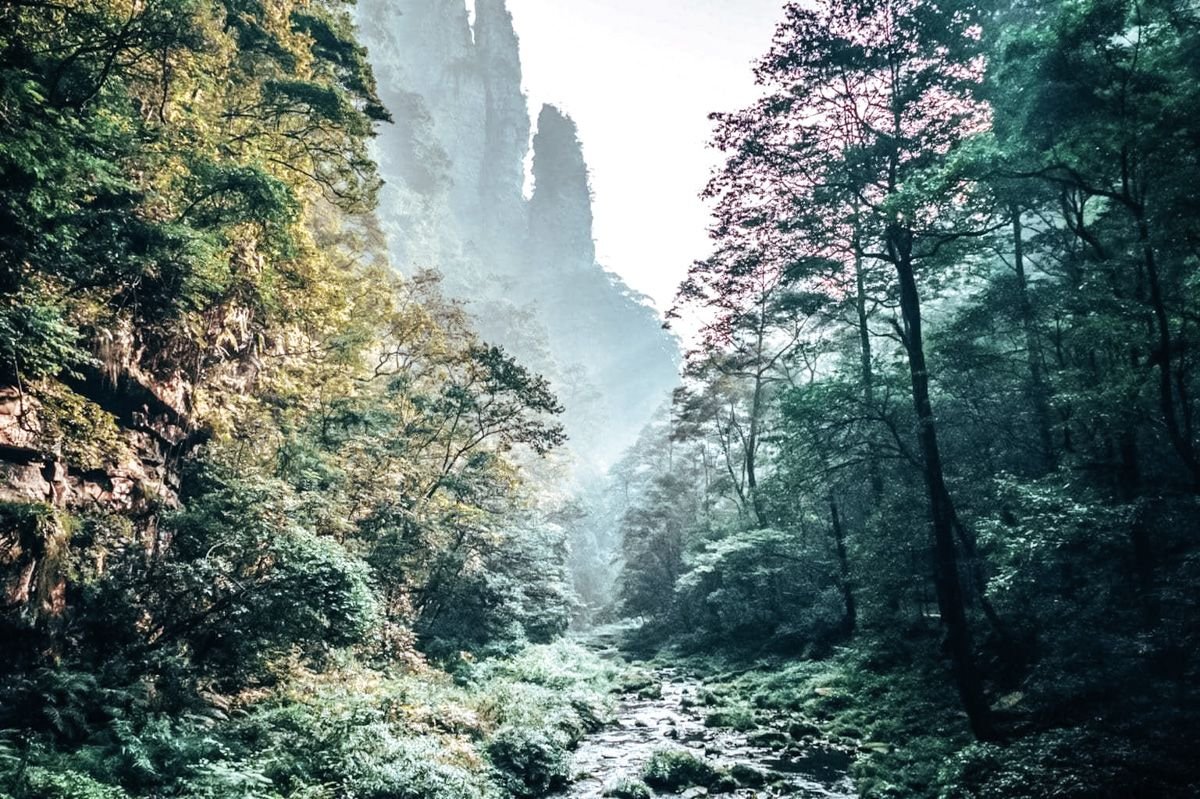 Beating (and Braving) the Crowds

“There’s a queue?” you might ask? One of the biggest misconceptions from international travelers about the Zhangjiajie area is that you’ll spend a few days hiking in almost remote conditions, lucky if you encounter another hapless foreigner with their camera in tow.

The truth is that the park – like most national parks in China – is very, very popular with Chinese locals themselves. It’s estimated that 5 million Chinese tourists visit the park each year. And, while it’s absolutely gigantic, it’s definitely not a utopian outpost with no-one to run into.

With that caveat firmly in place, there is a way you can avoid the masses: get there early.

When we arrived 30 minutes before the park’s opening time, the tour groups had already started to assemble. Luckily, intrepid travellers that we are, we hopped over a fence to get to the ticket booths before them, begged the cashier to issue us our passes and then raced to the front of the line for the turnstiles to kick off our Zhangjiajie hiking adventure. 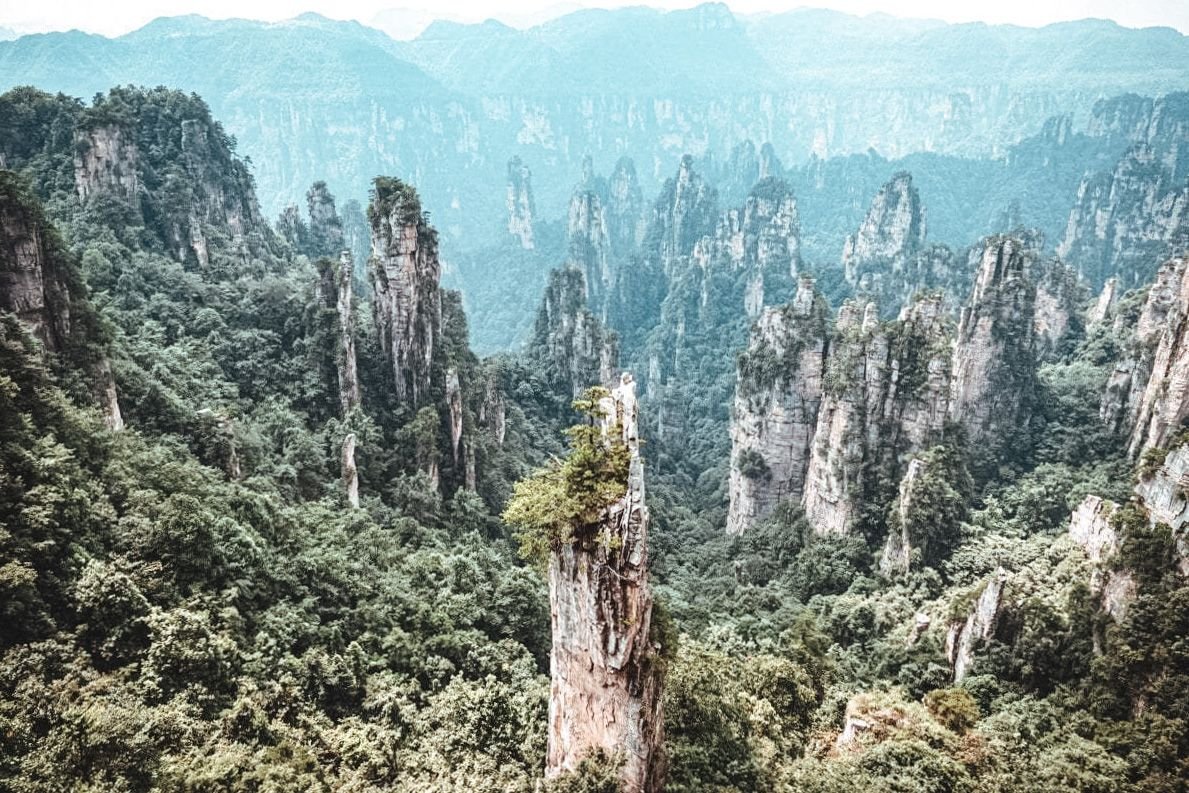 A Tale of Commercialisation

Now the thing with Zhangjiajie is that – like many attractions in China – it caters for the many and has become a bit of a commercial pursuit. The most surprising thing for us was that the park has a very efficient bus system that zips you from attraction to attraction.

While most of the park feels like an almost untouched paradise, there is a McDonalds right at the top of Tianzi Mountain and your first experience of the park could be an elevator, the Bailong Elevator, which whizzes you up to the famous Avatar section.

In saying that though, there was something unique and breathtakingly surreal about starting to ascend in a glass elevator, surrounded by darkness to suddenly be encircled by incredible sandstone pillars on all sides. It was honestly the best elevator ride of our lives, and something to put on your bucket list for sure. 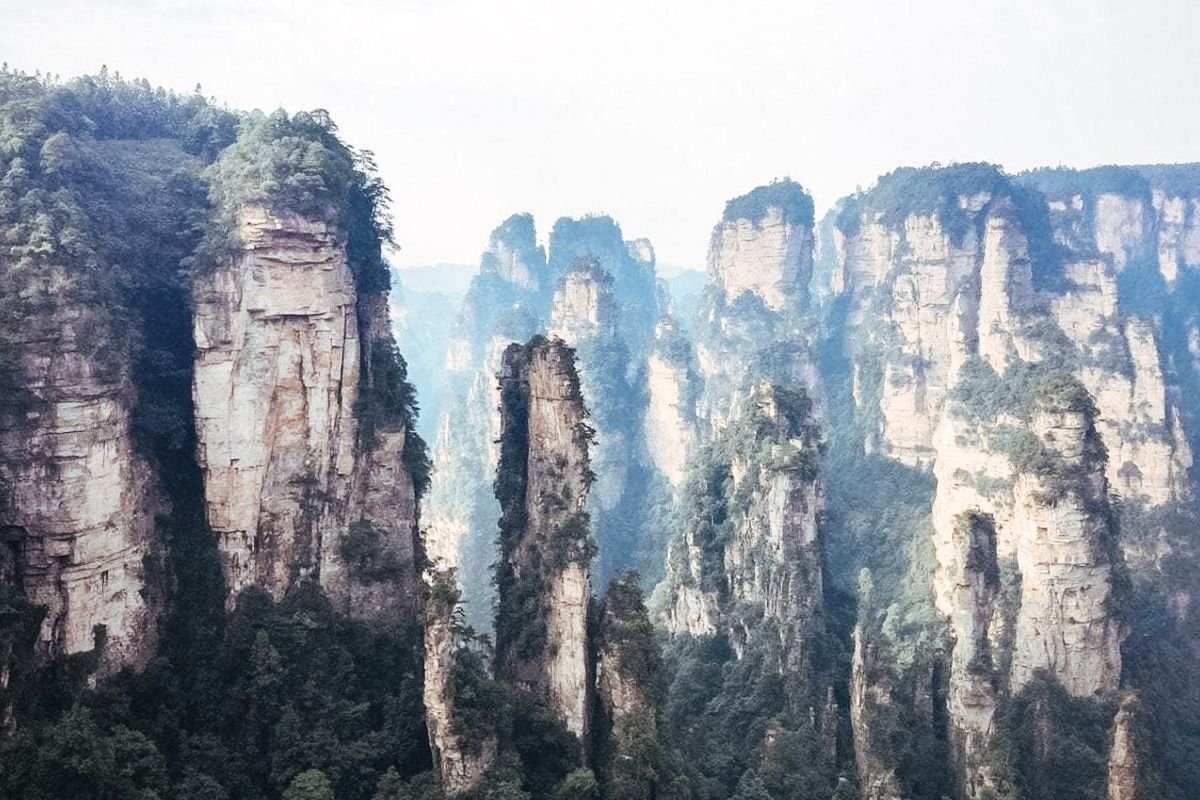 For the rest of our time on day 1, we spent it hiking. We meandered along quiet Zhangjiajie hiking trails to the busier viewing points, brushing shoulders with gawking locals as we walked on by. We found platforms with names like the Lost Souls Platform or the First Bridge Under Heaven, in silent awe of the incredible beauty that met us at every turn.

We walked through the ancient village of Wulong, checked out the Tianbo Mansion viewpoint, squeezed through tiny crevices to find the Warrior Taming Horse lookout and yes – we did it – we tucked into two Big Macs atop the summit. Because after 15 kilometres of steep steps and almost endless climbs, it felt like a justly deserved reward. That and there weren’t great alternative options… 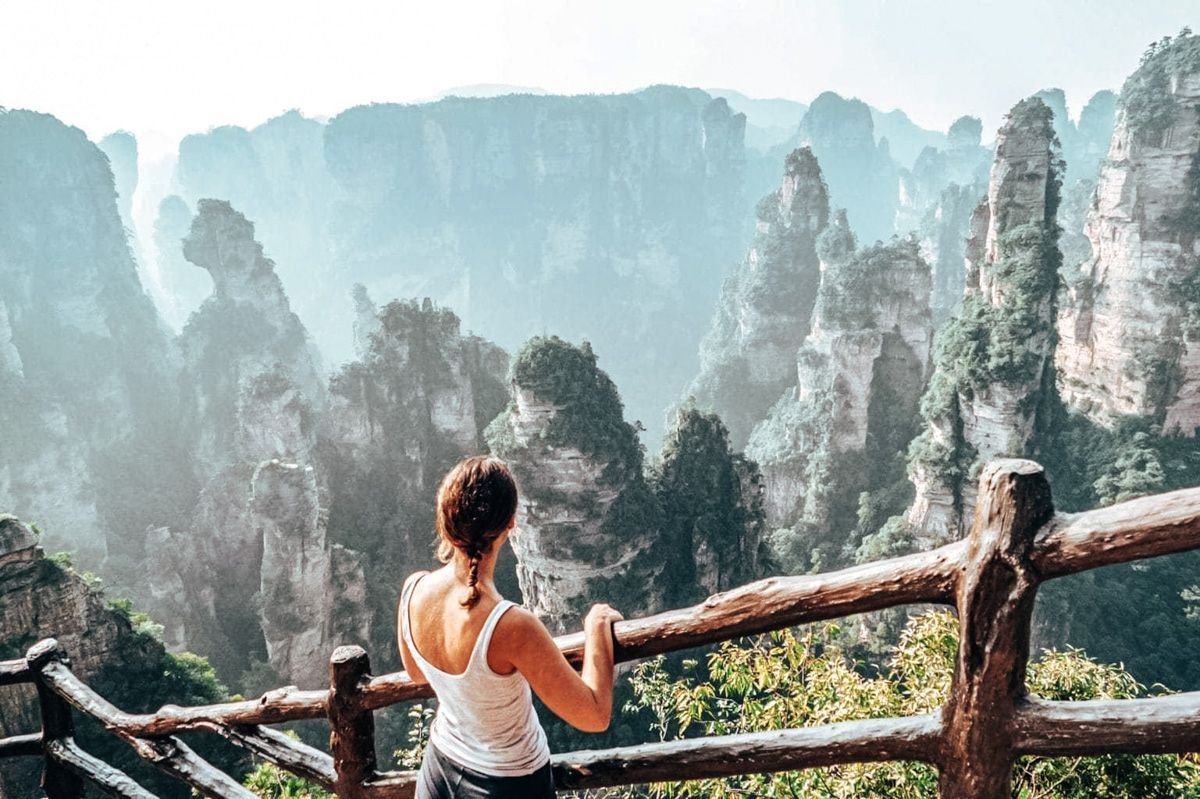 Before we knew it, it was the start of our second day of Zhangjiajie hiking. And today we wanted to start with something a little different: a little less uphill but equally insane views by taking the lesser-trodden path down the Golden Whip Stream.

The only Golden Whip Stream is a gentle way to see the park, taking an hour or so as you stroll along it, admiring the lush vegetation and, of course, those sandstone pinnacles looming above you. It’s a quieter affair, with no bus or elevator in sight.

What are plainly in sight though, are the cheekiest monkeys in China. These rascals are used to visitors feeding them (of course disregarding all the clearly marked signs which plead for you to leave them alone), so we made sure we held on to our hats, bags, cameras and anything not firmly strapped to our bodies, and continued on our way.

At one point we were even chased by a family of these furry critters, who were convinced that we looked like an easy (free) meal. 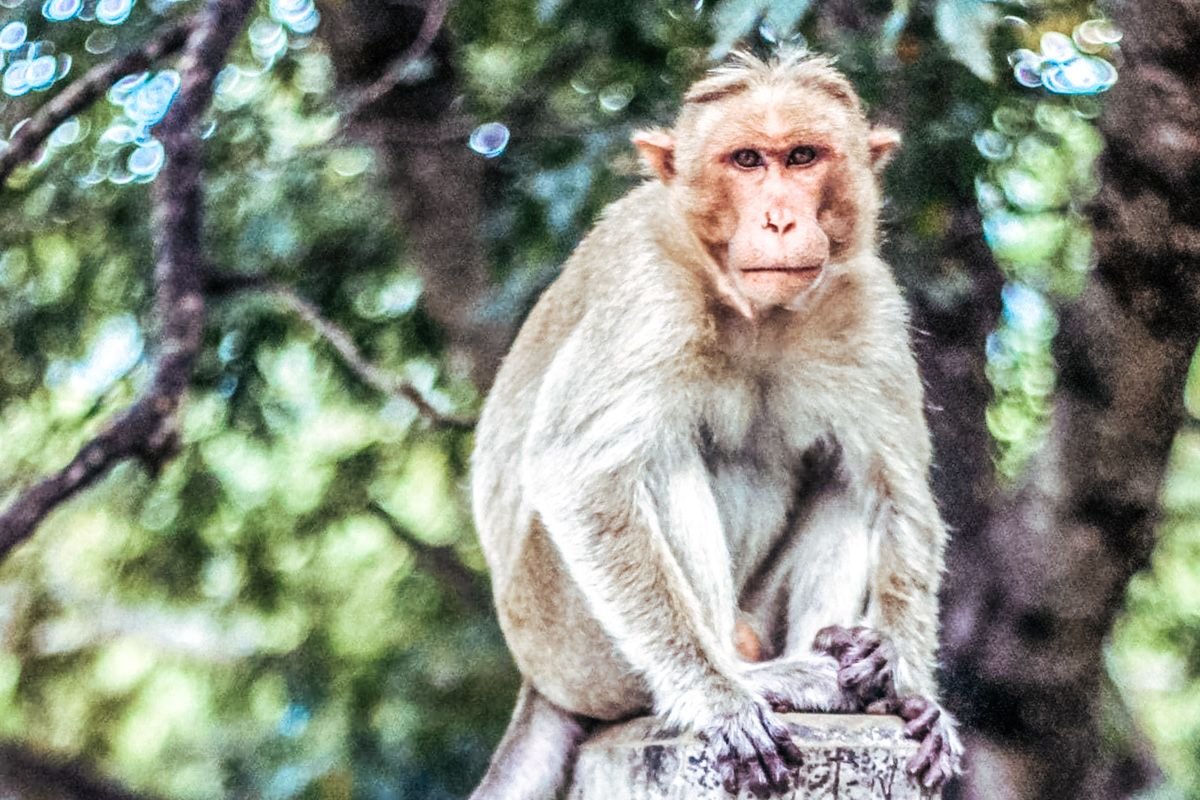 Now, just when you thought you’d planned a relaxed day of ambling, it’s time for torture. Because a common addition after walking the Golden Whip Stream is to hike up to Huangshi Village.

5,000 blisteringly steep stone steps to the summit… and then back down again.

It’s a brutal finish to what is already two days of Zhangjiajie hiking with almost continuous walking and inclines but, if you ask us, it’s worth the effort. At the top we were greeted by the Avatar mountains again, this time a reverse view that we thought was (somehow) even more magical than the day before. This view alone makes it worth including the Avatar Mountains in your China trip. 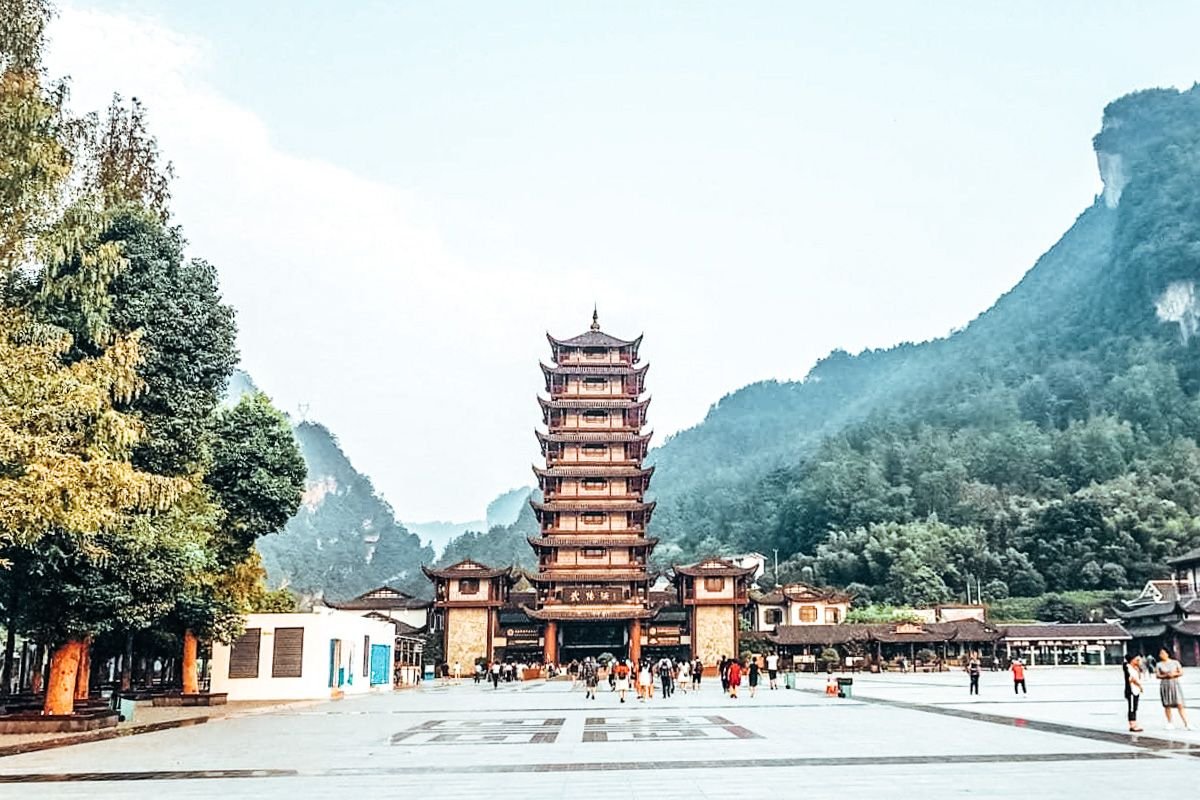 After a good nights sleep, and a slightly hilarious exchange with a Chinese masseuse trying to understand our potent screams each time she attempted to massage our jammed-up calves, we were back at it: the third and final day of hiking in and around the Zhangjiajie area.

Now of course you can spend many more days in the Wulingyuan Scenic Area, if your legs will allow, but we considered this to be our final day of Zhangjiajie hikes, and we wanted to go out in style.

The day was dedicated to Tianmen Mountain, a legendary landmark in China which technically isn’t in the national park itself, but on the other side of the city of Zhangjiajie. 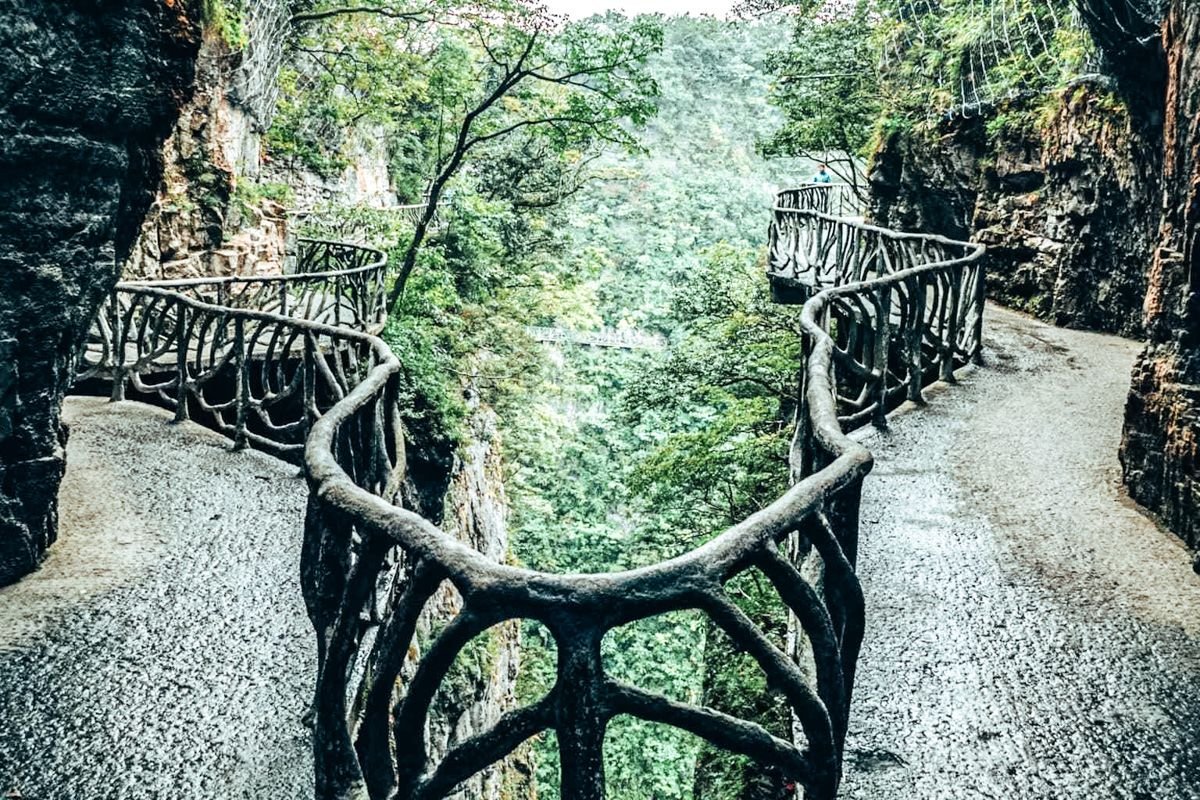 The reason for visiting? First up, it’s the bus ride. There are two ways to reach the top of Tianmen: via bus or via cable car, and you must try both at least once.

We elected to do the bus ride first, known as one of the world’s ‘wildest’ bus rides. Think 99 hairpin turns, navigated by a very able bus driver who didn’t seem half as terrified as his passengers, all clinging to the armrests.

The 15 minutes of boneshaking fear was worth it, of course, for the destination: Stairway to Heaven. It’s 999 steps on an impressive staircase or a few escalators (what else did you expect?), up to a natural ‘hole’ in the mountainside. 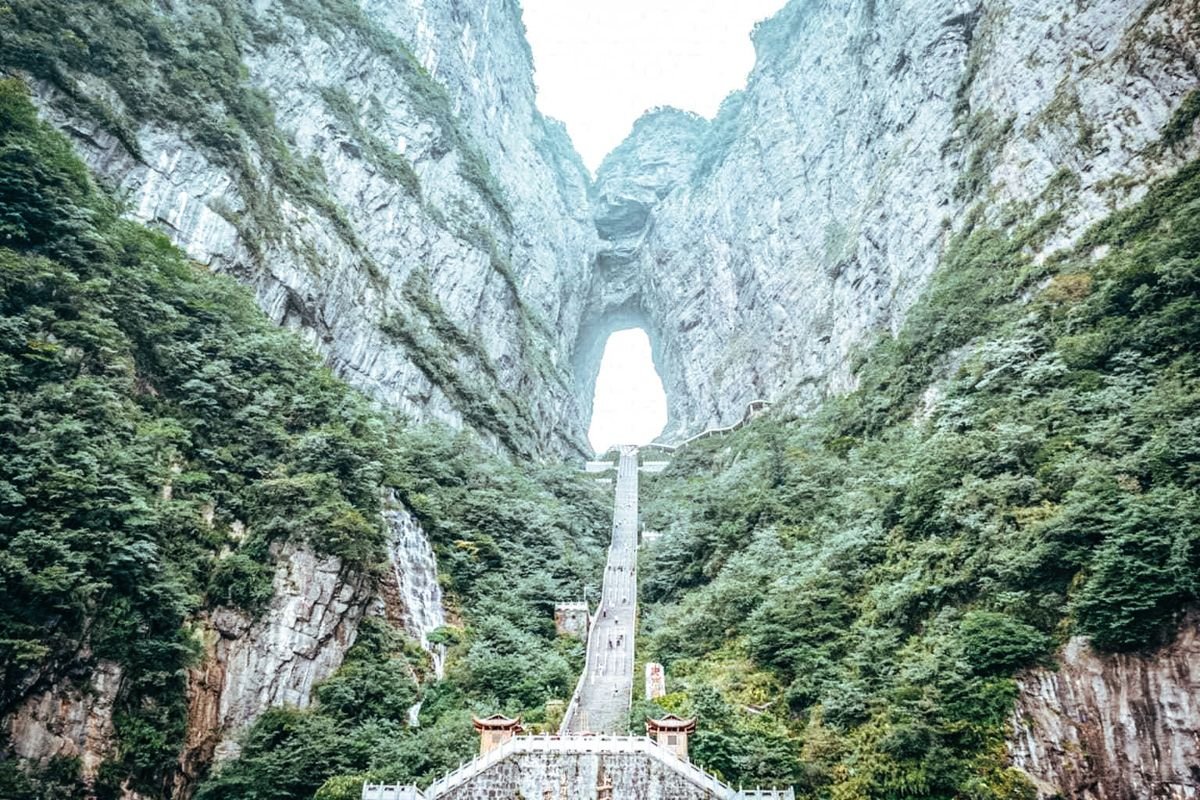 Indulging Our Fear of Heights

And, once you’re up on the summit of Tianmen Mountain, there’s a plethora of things to do. Like taking your time along the beautiful paths, or shouting out across the void to someone on the opposite site or braving the death defying glass walkways. Here you’re fitted with special velvety shoe covers where you try to tiptoe slowly across their surface, petrified at the sheer drop down the mountain below.

The crowning glory of it all, however, must be the cable car right back to the start. Once the longest cable car journey in the world, you’ll float through the mountains for almost 30 minutes, often paired up with some local Chinese tourists who will definitely be trying to capture that perfect selfie to show the strange bearded giant and his short, smiling wife to their friends back home. 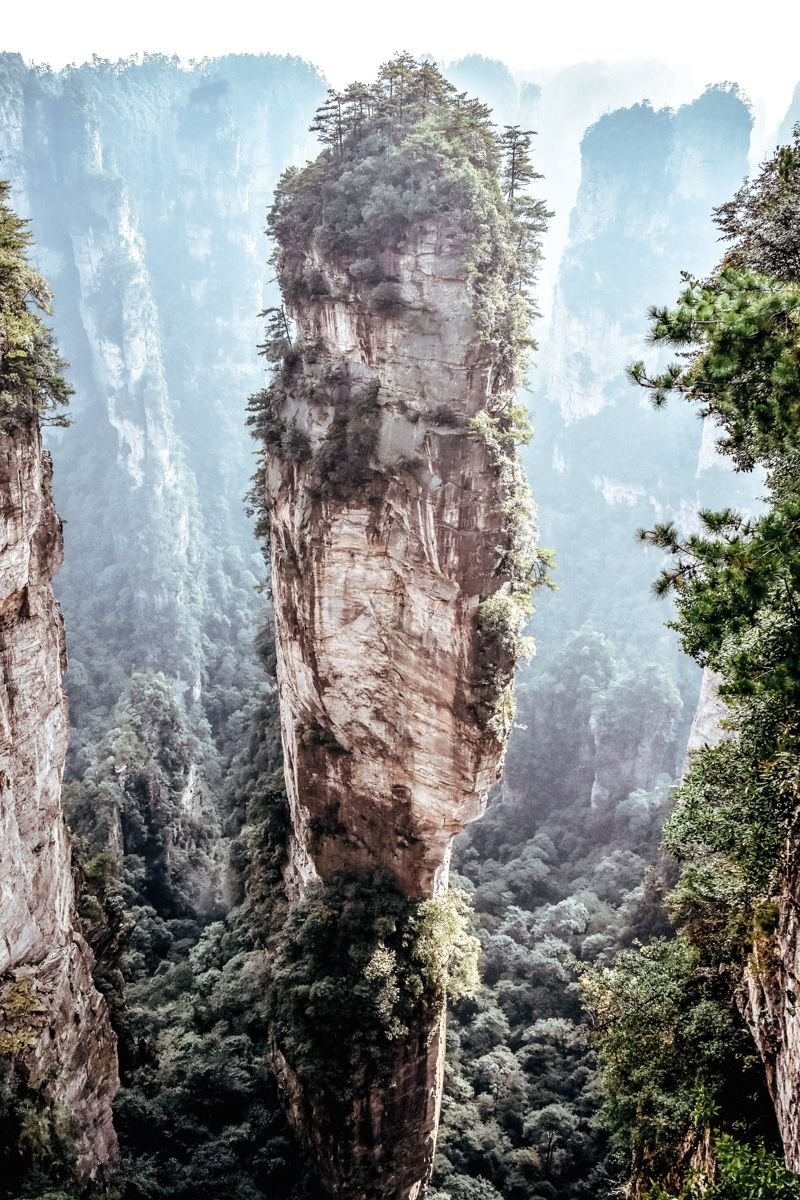 Photo by Emile Guillemot on Unsplash.

So, the question above it all: would we recommend Zhangjiajie to be on your China itinerary? And the answer? A decisive, almost thunderous yes.

Yes, there are Golden Arches atop Tianzi Mountain. Yes, you’ll sometimes have to dodge a selfie stick or a megaphone-wielding local guide. And yes, sometimes you’ll have to share your spectacular viewpoint with a hundred other snap-happy tourists.

But then there will be times where you’re hiking Zhangjiajie without a soul in sight. When you run ahead and find a path entirely empty, and a panoramic vista of some of the most achingly beautiful landscapes in the world. And your broken body will be worth it, to see one of the planet’s most mind-blowing destinations, Zhangjiajie.

Book a room near Zhangjiajie: 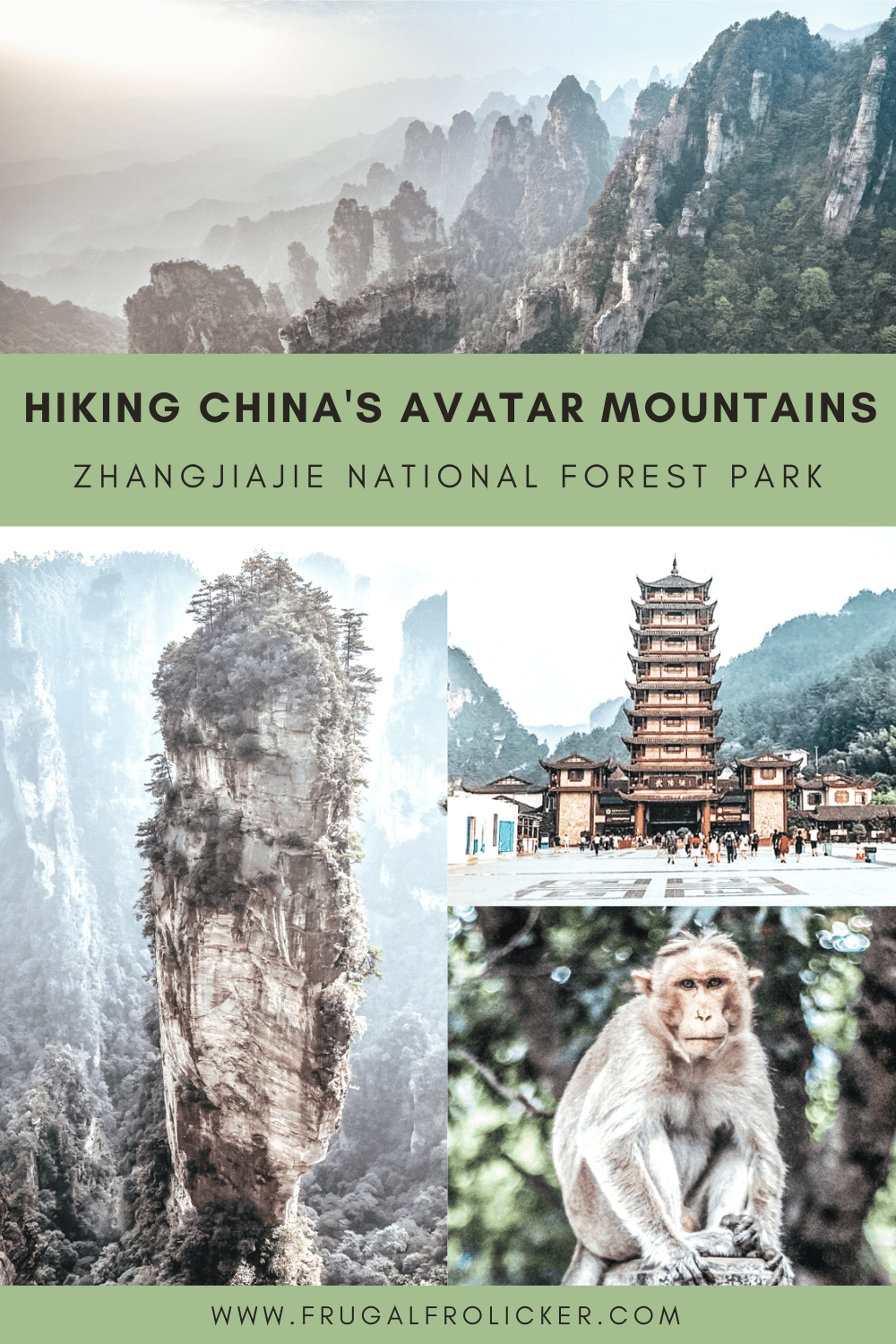 Tags: Avatar MountainsChinahikingZhangjiajie
Previous ArticleHow This Woman Quit Her Job To Travel Europe Full-Time in a Motorhome
Next Article Essential Hiking Gear for Beginners: 5 Items You Absolutely Need For Your First Hike