By on Europe Italy

The very last day of my summer Euro-trip had me in Verona, a small city in northern Italy that I’ve never had much desire to visit. You know, the one that’s famous for Juliette’s balcony, under which Romeo would stand and bellow out sweet nothings to her? (That’s how the story goes, right? I’ve never actually read Shakespeare…)

Anyhow, I wasn’t particularly itching to see Verona, but I wanted to stay somewhere in-between the Dolomites region and Milan the night before flying out of Milan Malpensa. I also knew I’d have plenty of work to catch up on and figured I’d do so while in Verona, without the temptation to go out and frolic. 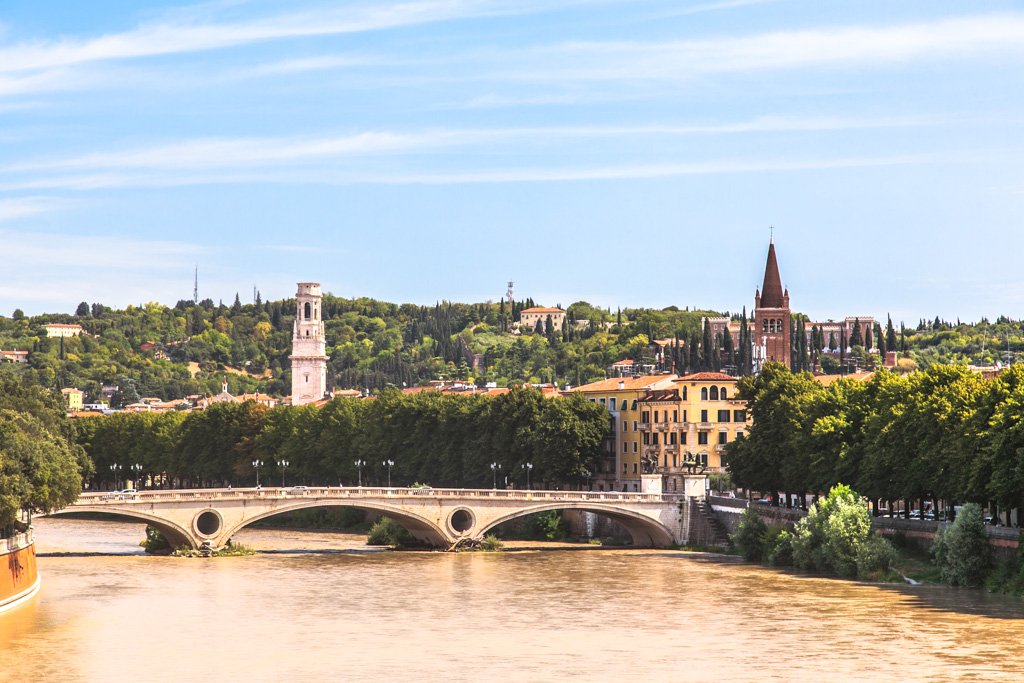 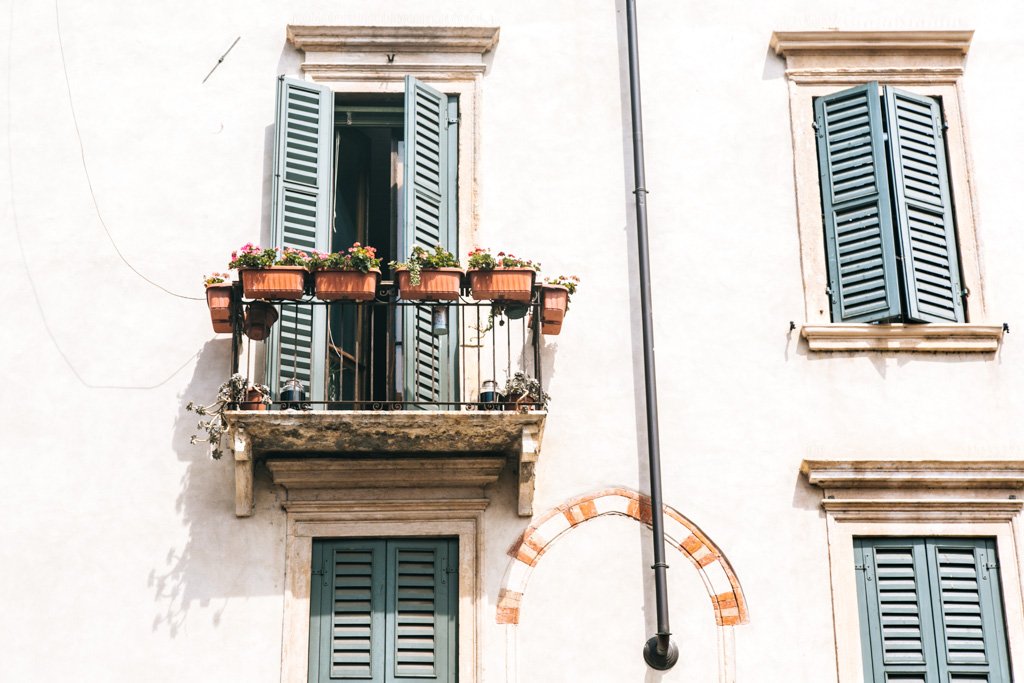 But can you blame me for wanting to take advantage of my last day in Italy? My original idea was sound, but I reasoned that it might take me another 10 years to return to Italy – and did I really want to squander my last day in this magical country by hiding out in my sweltering-hot Airbnb room behind my laptop?

Uh nope. So with nary a plan, I stepped out onto the streets of Verona for the day to see what I could find. I never intended to blog about Verona or compile any sort of useful guide to the city, but this place was such a pleasant surprise that I wanted to at least share some photos and cool things I uncovered during my day here. 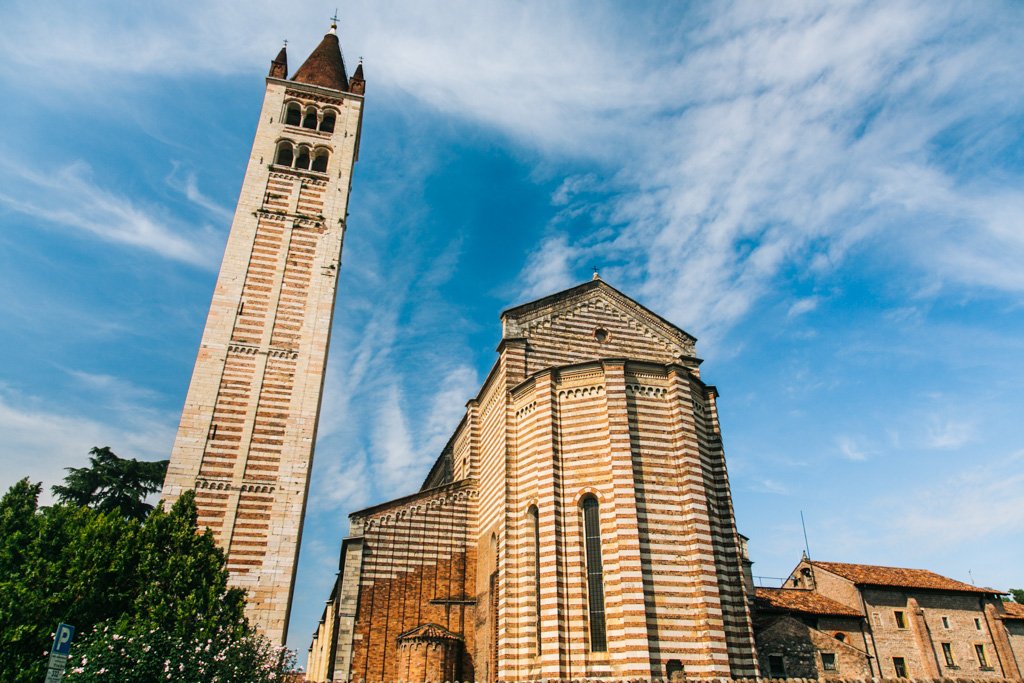 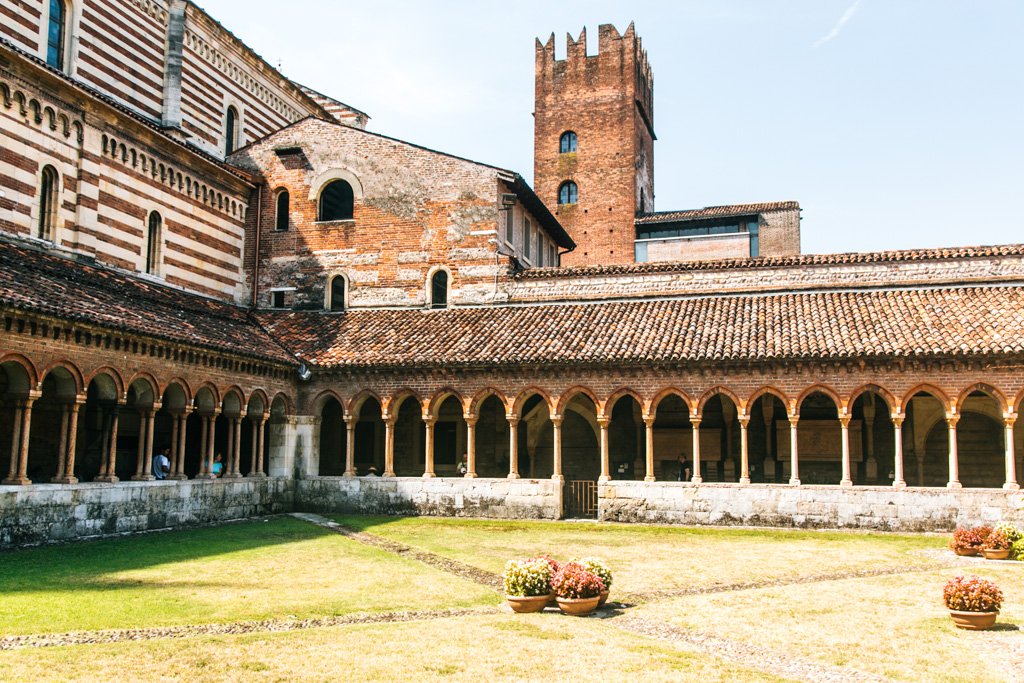 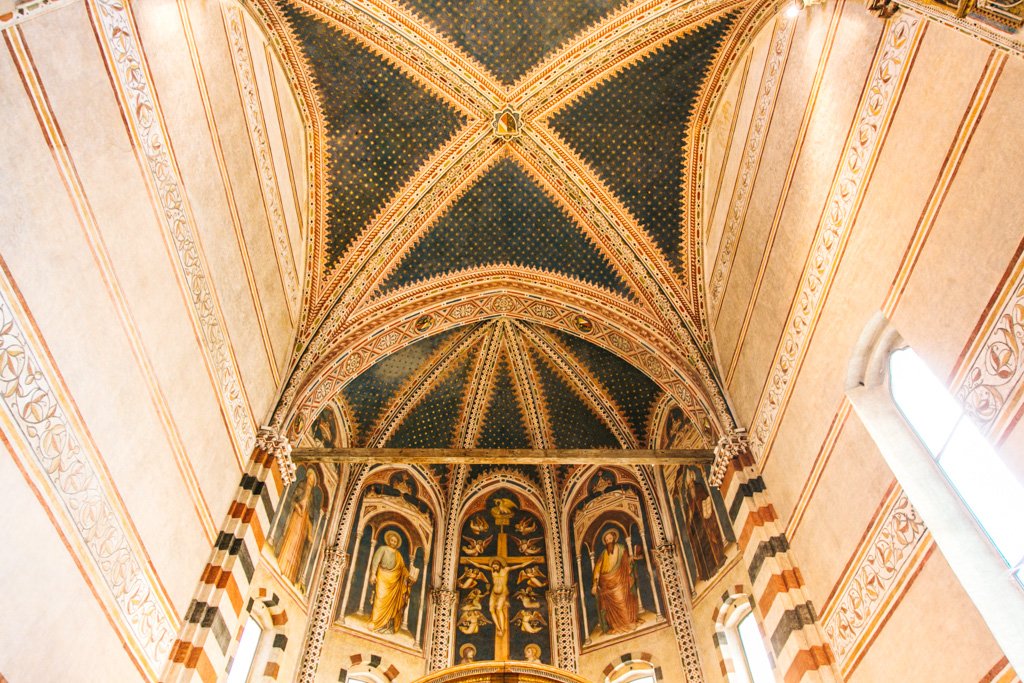 My Airbnb host urged me to visit one of Verona’s famous churches, Basilica di San Zeno Maggiore, which just so happened to be a 5-minute walk from her place. The internet tells me it’s a Romanesque church, which I probably would have known 15 years ago when I was taking an art history class… but I’ve since cleared out space in my brain for other things.

Whatever it is, most anyone without any knowledge of art history can call it ridiculously gorgeous. With walls adorned with colourful frescos and aisles lined with majestic columns and pillars, this church is an absolute masterpiece. Admission is €2.50. 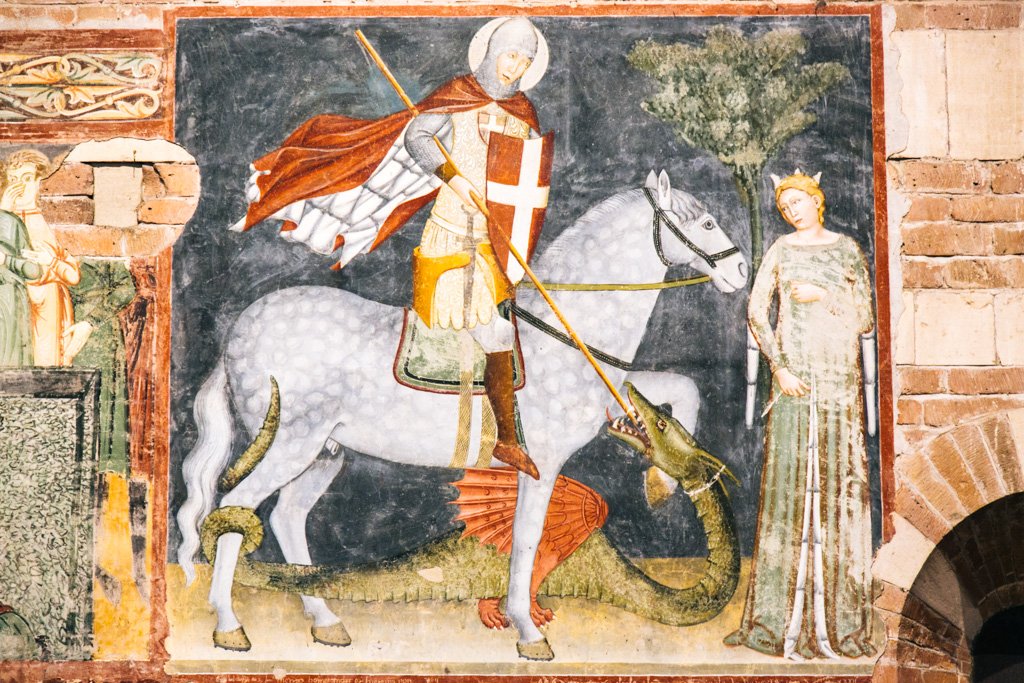 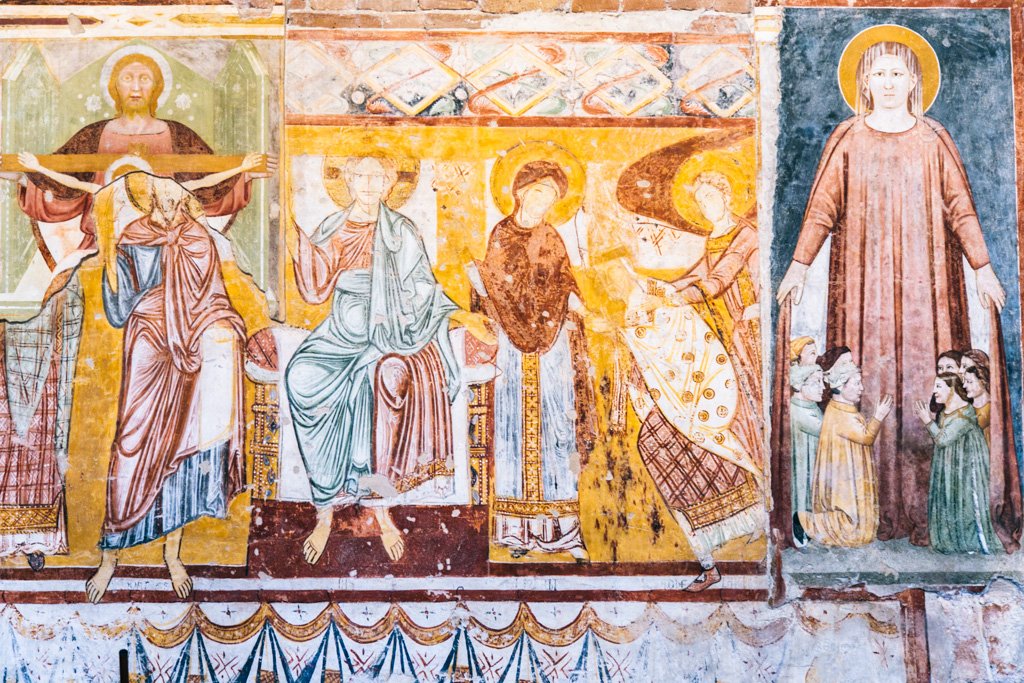 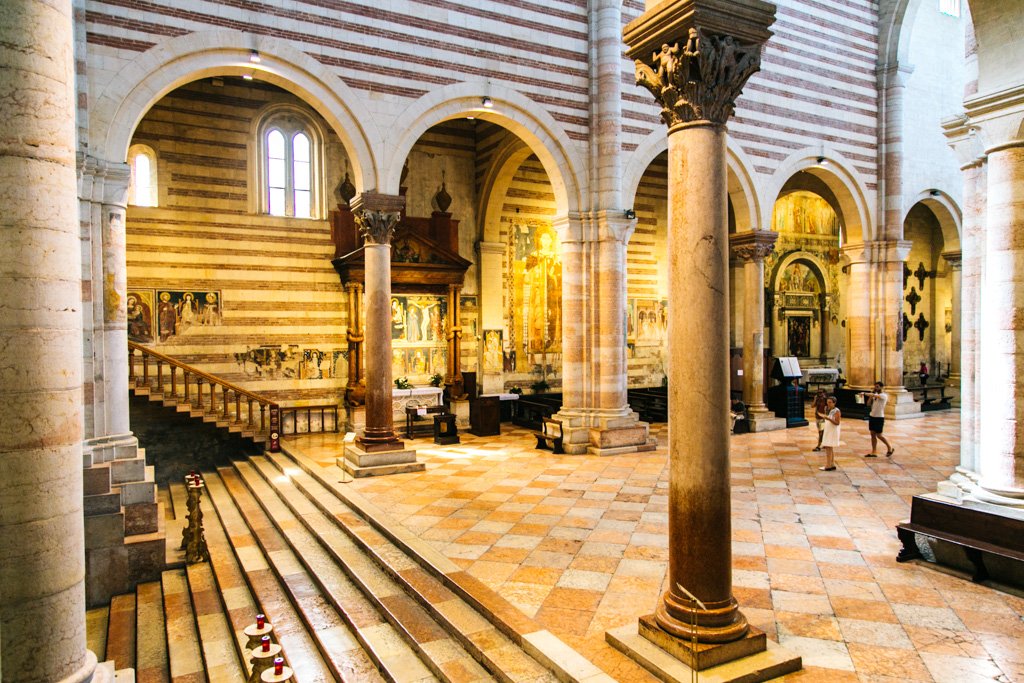 From here, I walked back toward the city center along a raised walkway along the Adige. It’s pretty hard to miss Castelvecchio, Verona’s old red bricked castle on the river. I only walked halfway across its bridge, but there’s also a museum you can tour for €6. 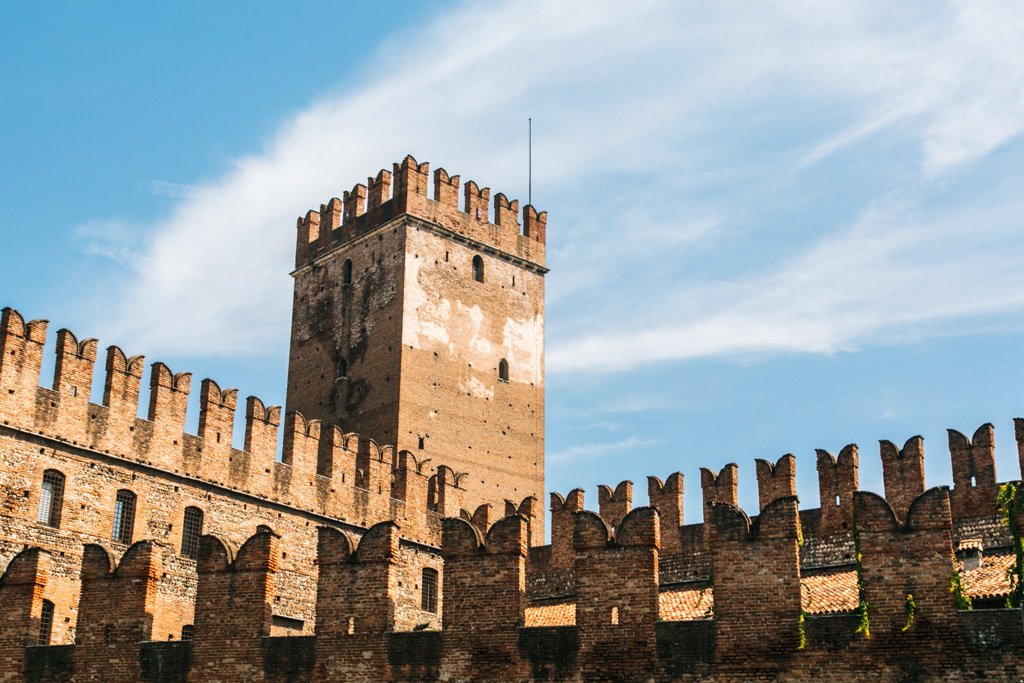 I consulted Google Maps to find a nearby restaurant for lunch and it led me to Enocibus, the most delightful family-run, hole-in-the-wall joint. No English was spoken or found on the menu – always a good sign, intimidation factor aside. I ordered the lasagna with some wine that they recommended and vowed to come back later for dinner. Highly highly recommend! 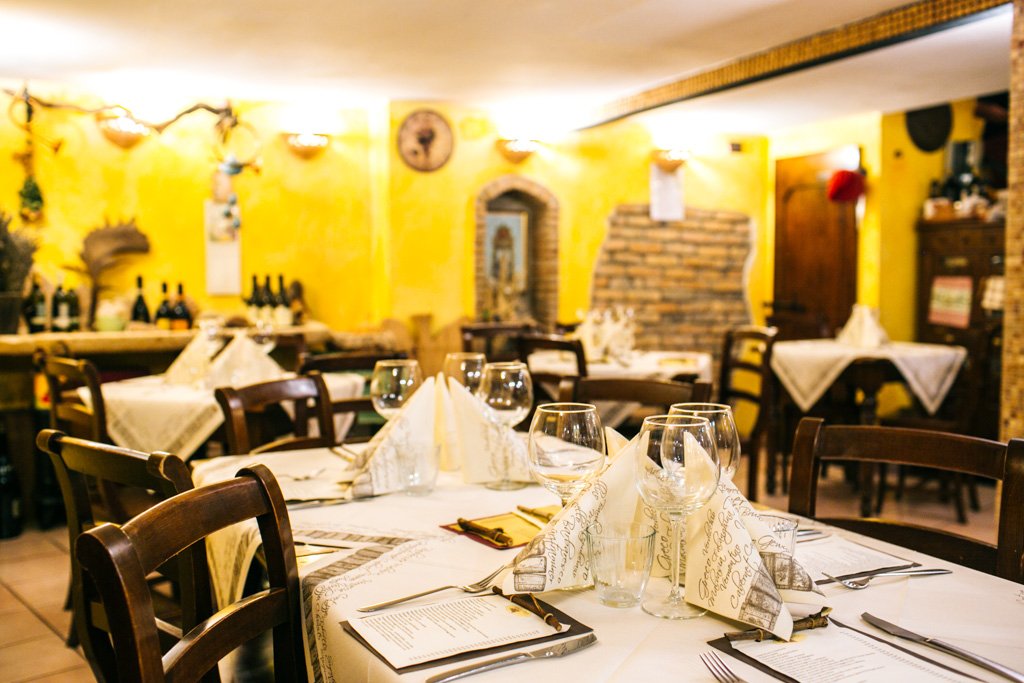 The Arena is Verona’s Roman amphitheatre, used primarily for large-scale opera performances. If you want a peek at the interior without having to sit through an opera performance, you can tour the building during the day for €10. 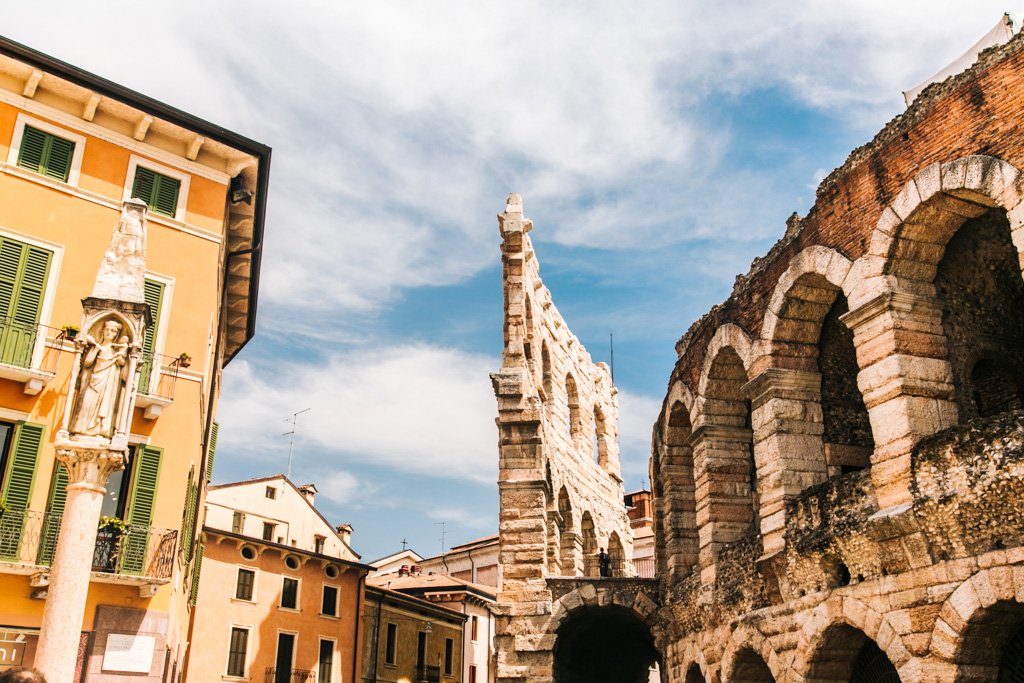 I guess you can’t really do Verona right without stopping by Juliette’s house, so I made my way across town to check it out with 100 of my closest new tourist-friends. It was one of the most underwhelming travel experiences I’ve ever had, BUT I’m glad I went to see that damn balcony. If you want the thrill of standing out on this famous balcony, admission into the house is €6. 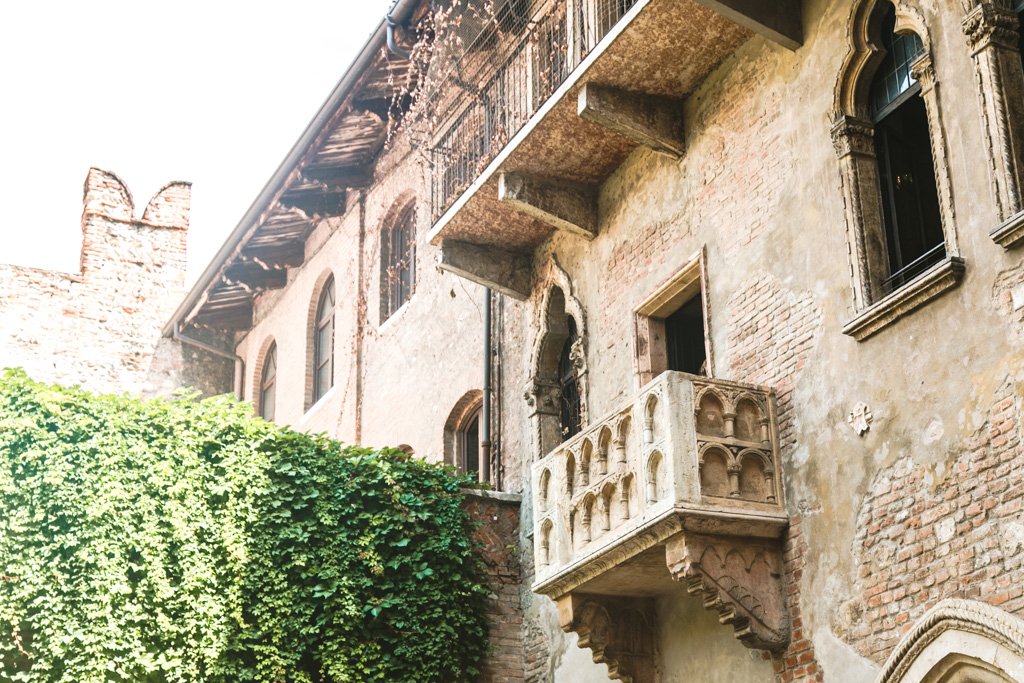 On the eastern side of town, I crossed the Ponte Pietra and spotted some stairs just across the street that beckoned me over. They led up the hill to Parco Scalone Castel San Pietro, from which I enjoyed fabulous views of Verona and the river below.

FYI – for optimal photos, either head up here early in the morning during golden hour, or around sunset. Midday to late day, the light is a bit too harsh as you look westward toward the river and city center. 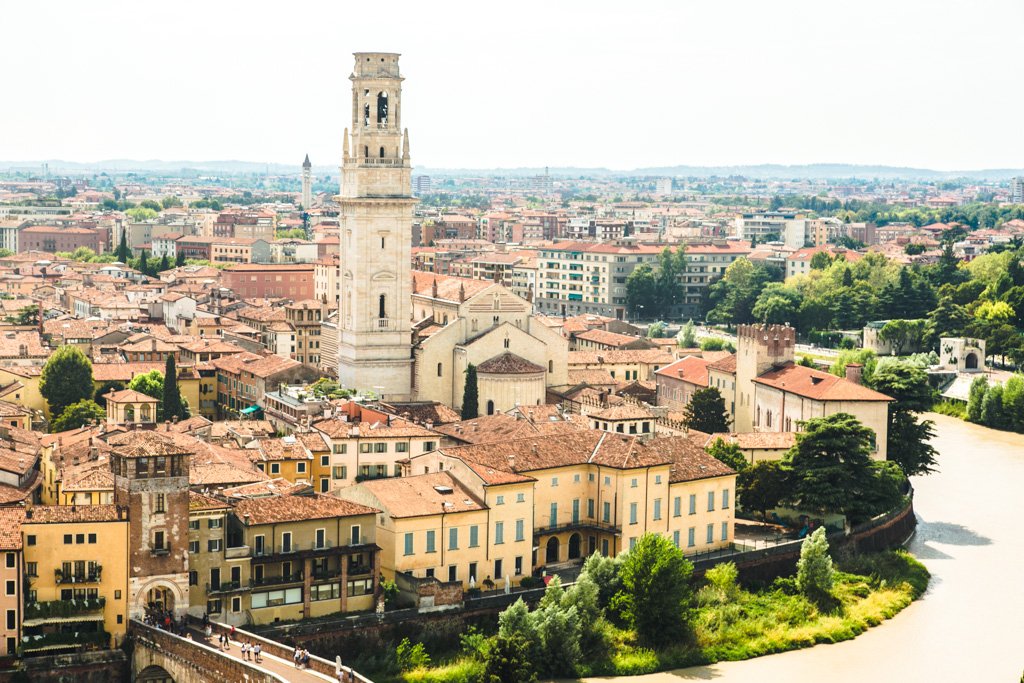 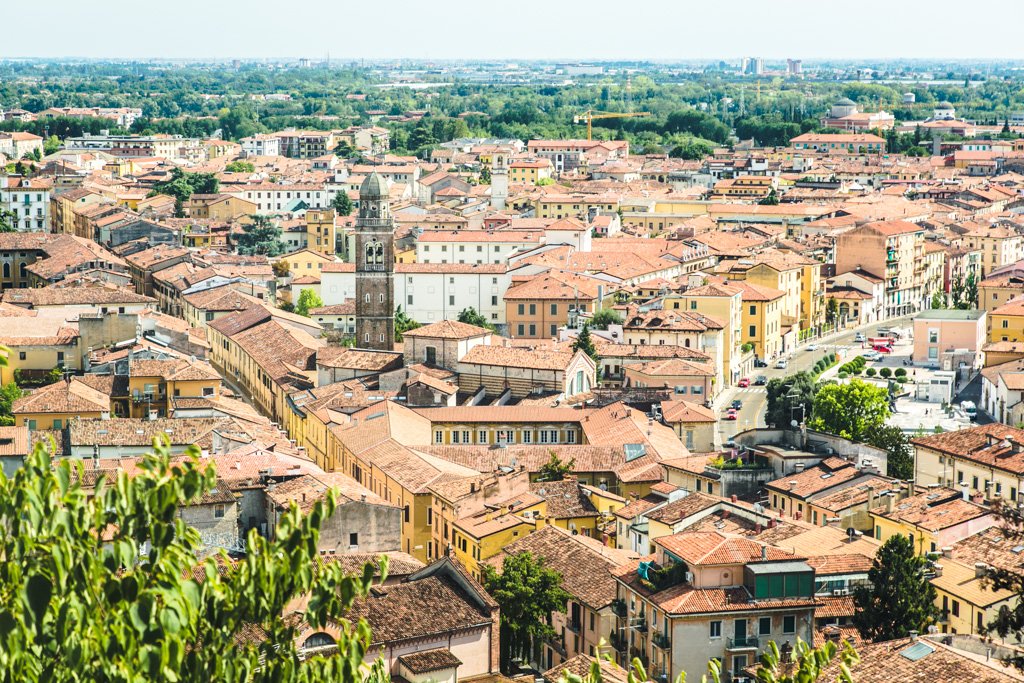 One of my favorite things about Italy in general is how you can easily take delight in just being there, even without intentionally sightseeing. For me, just aimlessly wandering the streets and taking in the atmosphere is enough to morph me into the heart-eyed emoji. Locals chattering in rapid Italian, piazzas aplenty for hanging out and people watching, and art absolutely everywhere – what’s not to adore? 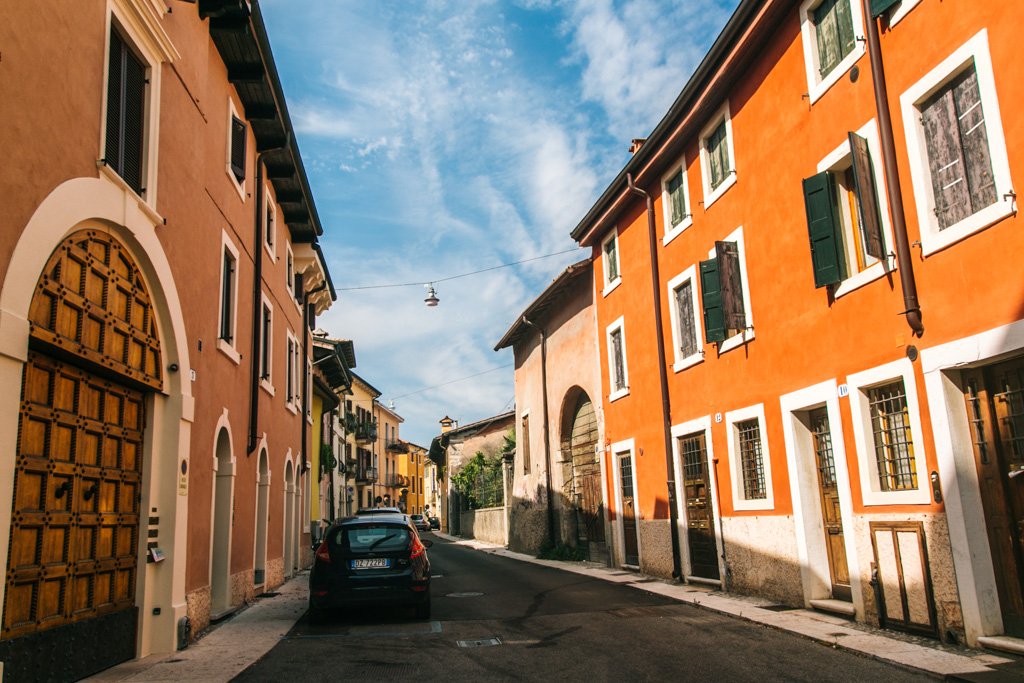 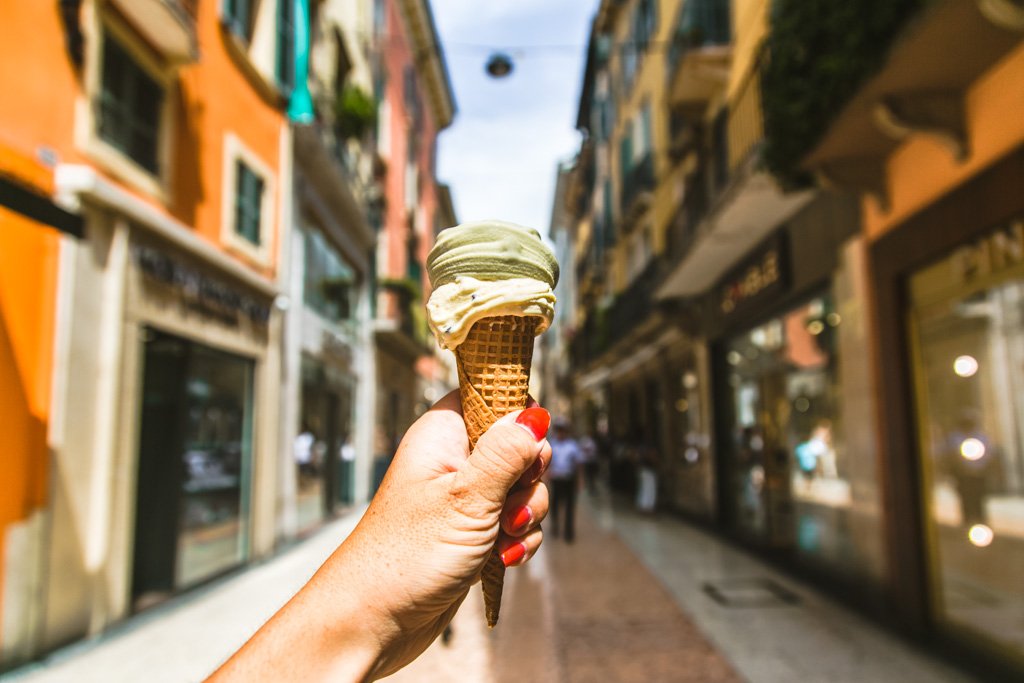 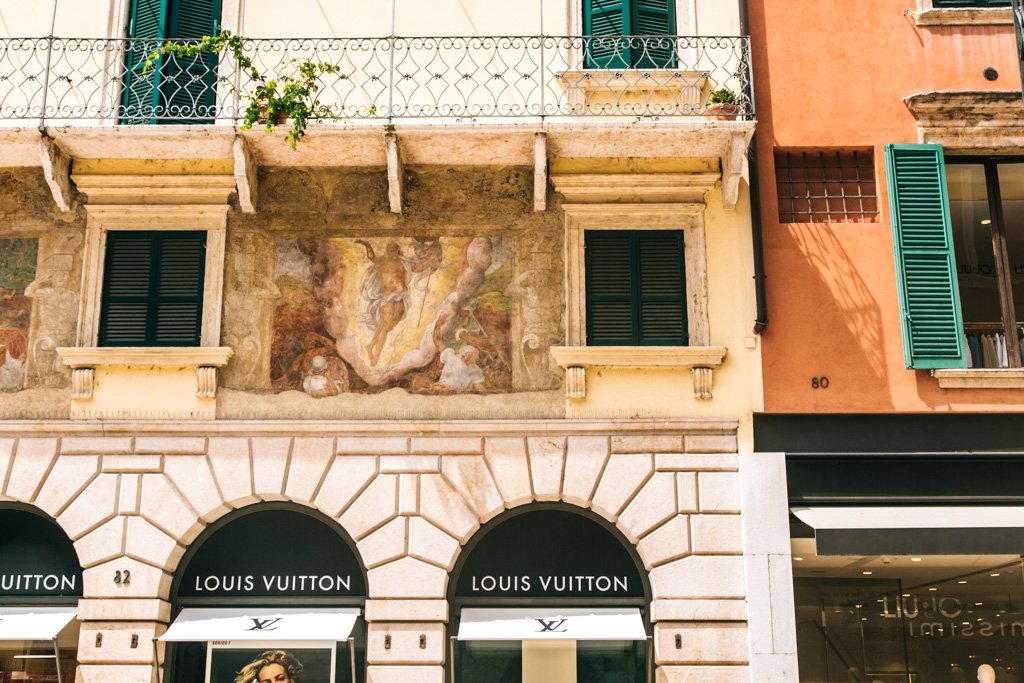 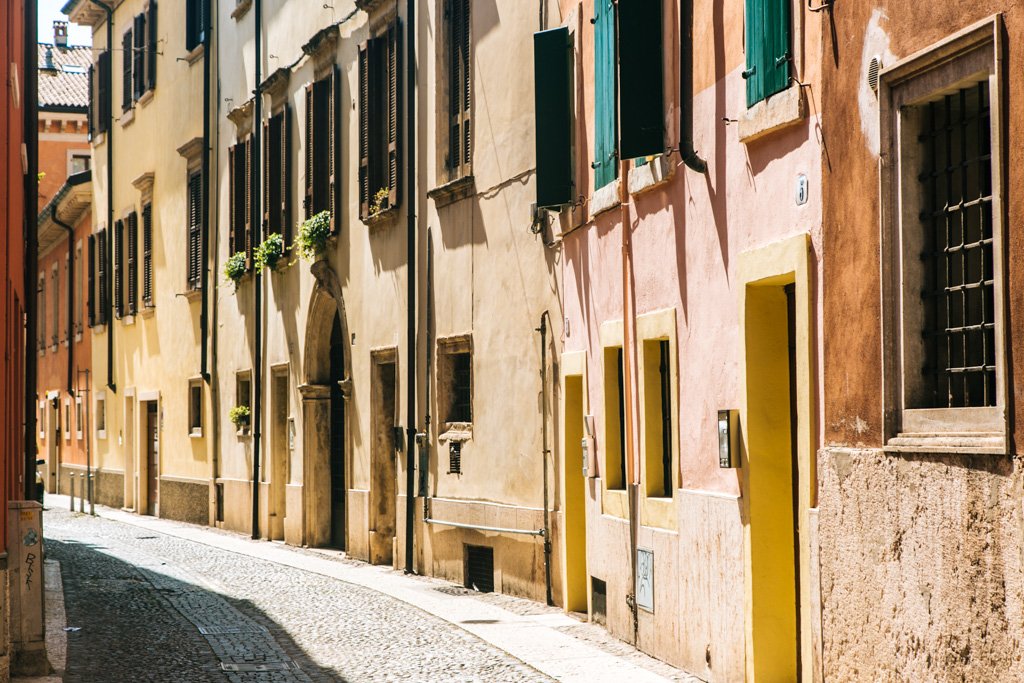 Through the entirety of my two weeks in Italy, I effortlessly fell into a pattern of *wander – photograph – stop to cool off in the shade with either a gelato or an aperol spritz*. Verona was no exception.

And honestly, it was refreshing to explore a new place without thinking about how I’d blog about it afterwards. There was no pressure to see all of the things or research good photo ops; it was just me aimlessly frolicking for the sake of it.

And then I went and blogged about it after all. Ah well! 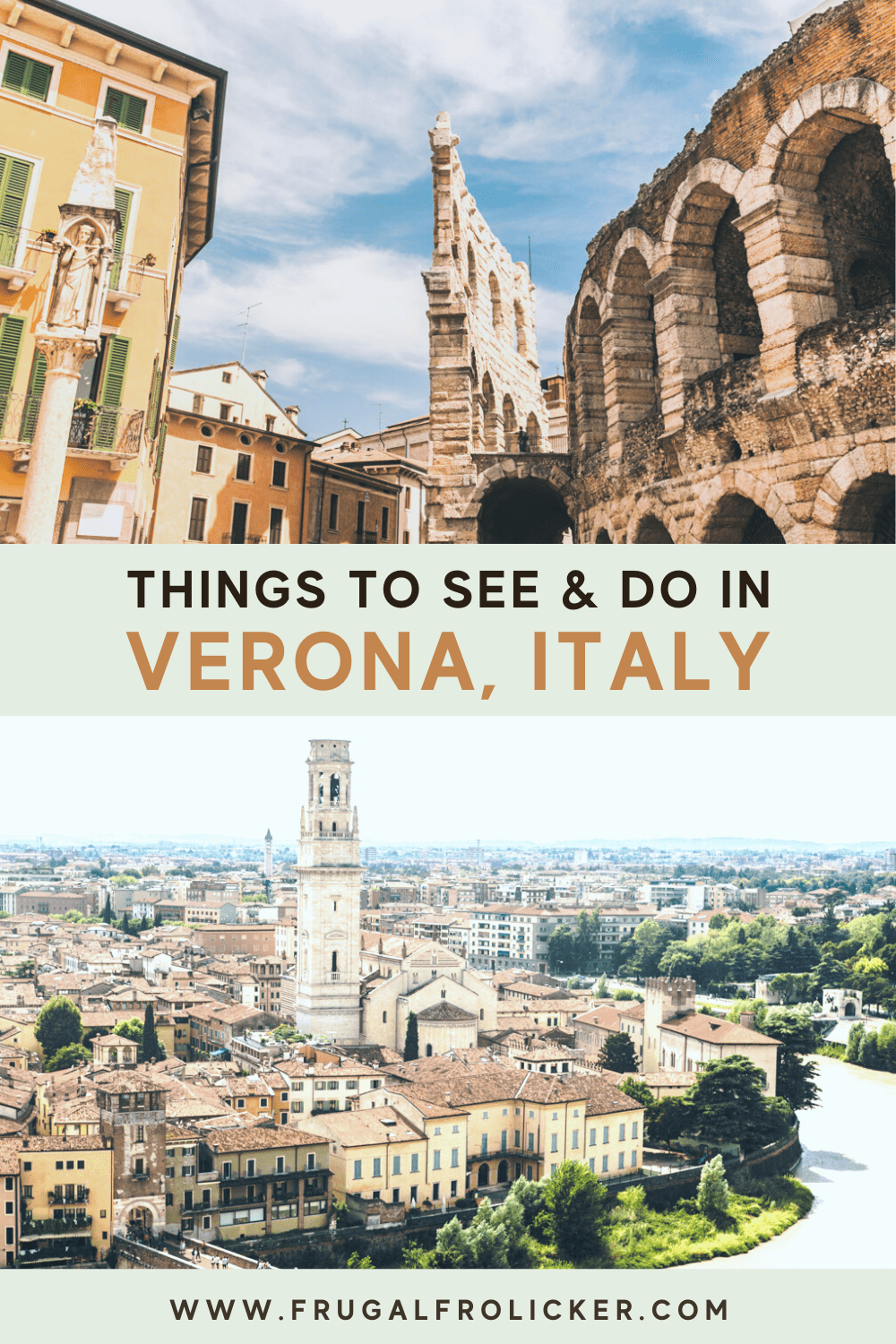