By on Australia Boating Water Sports

The Great Barrier Reef gets most of the glory when it comes to diving in Australia, but you know what? There are actually better dive locations in this country for spotting some exceptionally cool creatures: think whale sharks in Ningaloo Reef, and great white sharks in Port Lincoln.

And seals in Narooma! 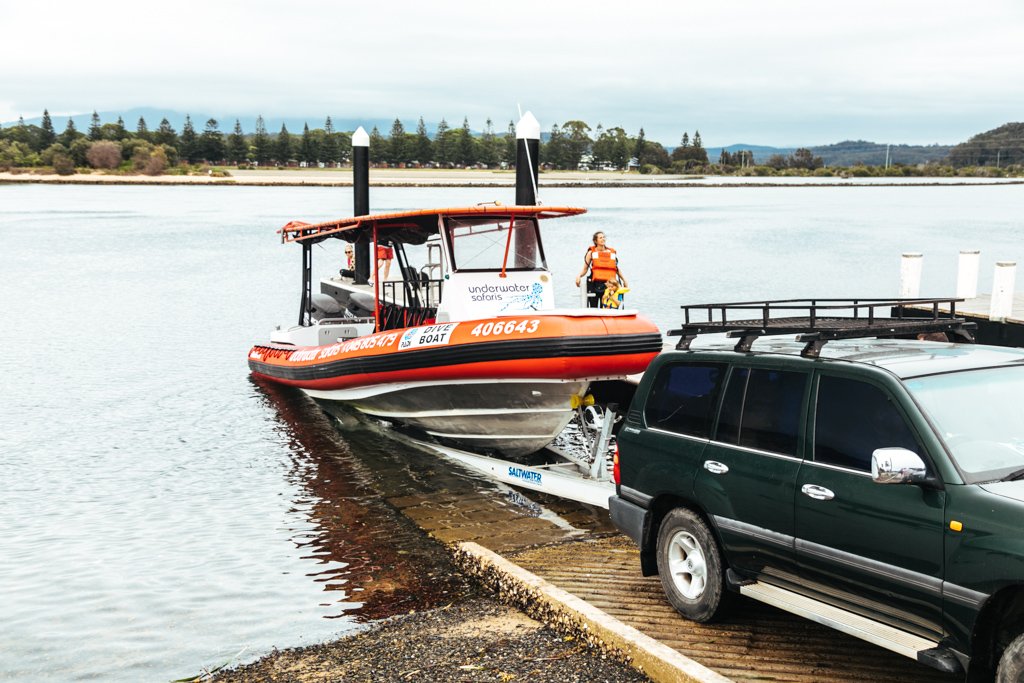 Just a 5 hour drive from Sydney on New South Wales’ South Coast, Narooma is the jumping off point for Montague Island, a protected nature reserve just 9km off the coast that hosts hundreds of seals, 90 different bird species, and a penguin colony.

Over Australia Day weekend last month, Marijs, Elly, and I holidayed in Bermagui and stopped in Narooma on the way back to Sydney just so we could hang out with some seals. We booked onto the Narooma seal snorkeling trip with Underwater Safaris on what was the third consecutive rainy day of our trip (did I mention we’ve not been lucky with weather? Oh yes, I did).

Here’s a look at our experience snorkeling with the seals at Montague Island! 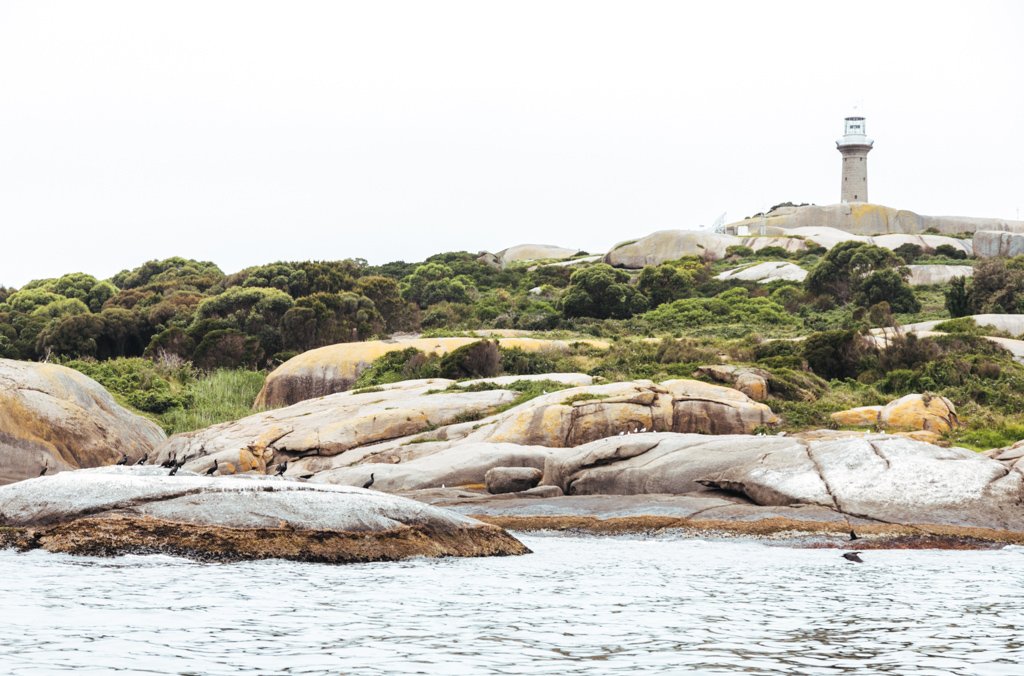 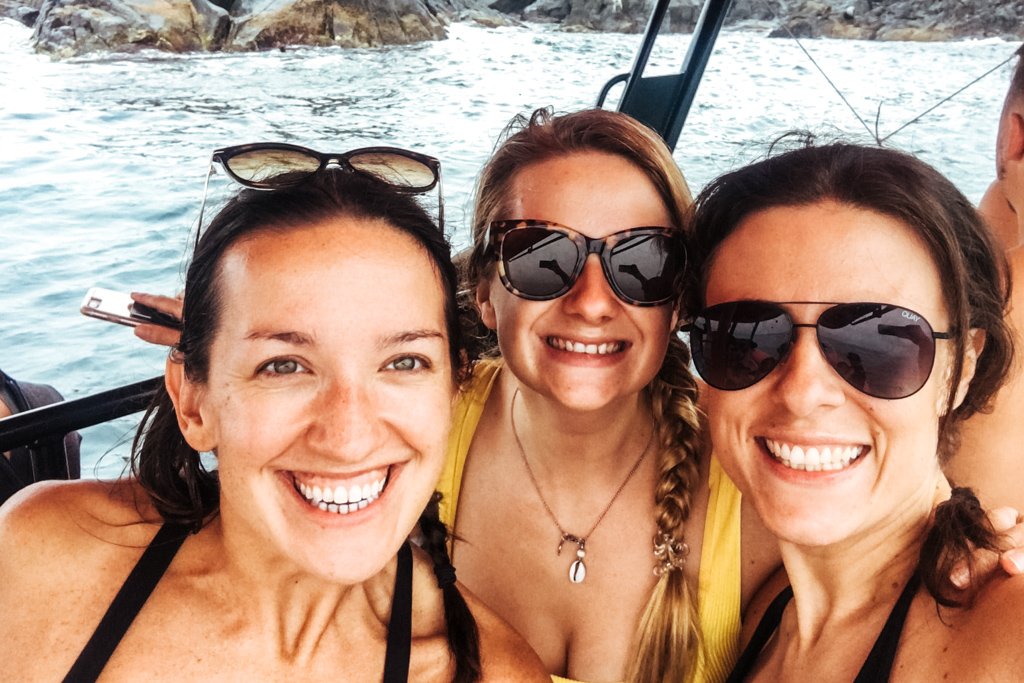 First off, you have the option of either diving or snorkeling with the seals. We opted to snorkel, as one of us doesn’t dive, but mostly: I’m not sure that diving is necessary in order to have a fantastic experience with the seals. We saw plenty of seals near the surface and out on the rocks. They’re constantly going from land to sea and back, and I feel like you’re likely to see more of them closer to the surface while snorkeling vs deeper in the water while diving.

Things were looking pretty promising at the sight of a seal and a sting ray just off the boat launch before we’d even set out. We wet suited up and I mentally prepared for what our skipper, Francois, warned us would be a very bumpy ride out to Montague Island. 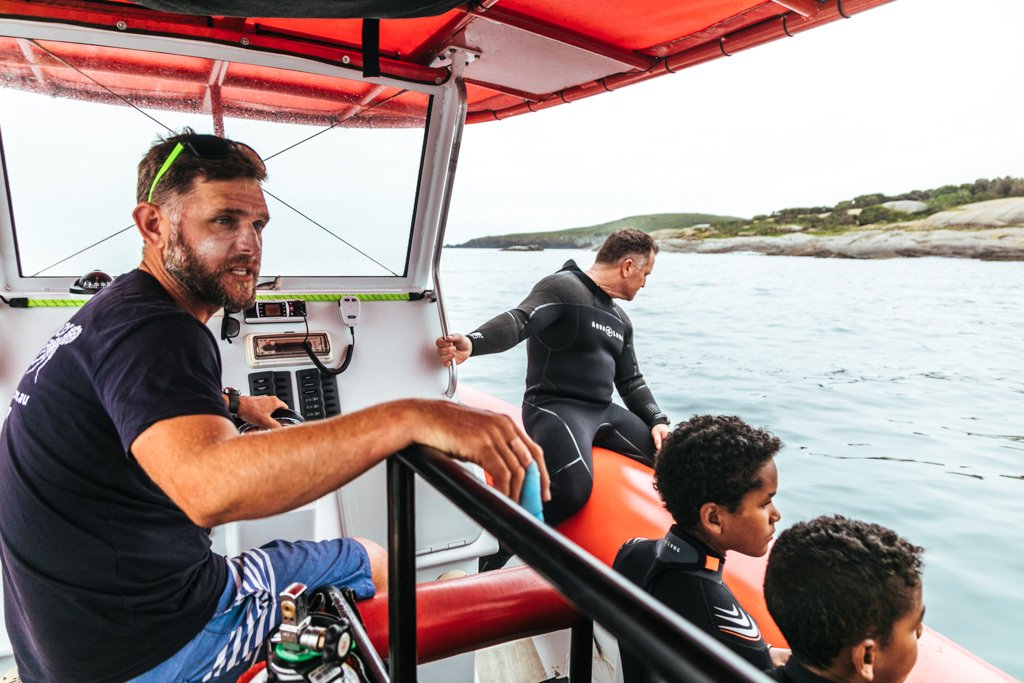 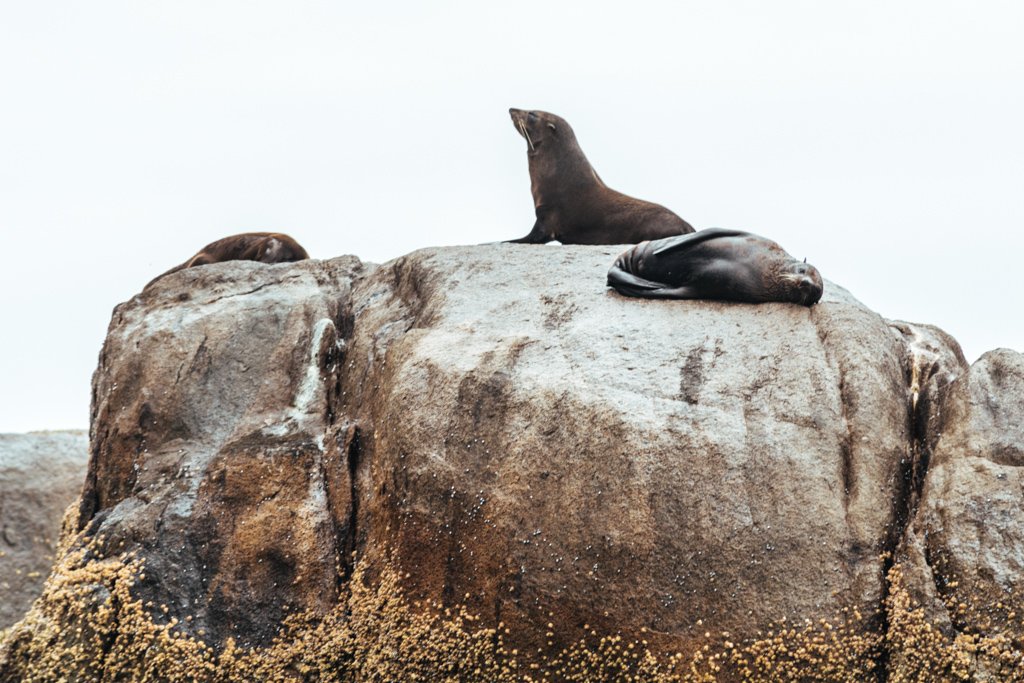 Mercifully I felt fine by the time we arrived, despite the rough 30-minute journey out there. We stopped the boat at one of the many sheltered bays around the island and were free to hop in and swim on our own with the seals. Francois advised us to look for seal fins sticking out at the surface and swim towards them, which is literally how I crafted my little seal snorkeling route at this site.

When I stuck my head in the water I spotted a few seals closeby, twirling around and gliding back and forth around me. One of them was spinning around just below my stomach, so close it felt like I could reach out and touch him. UGH SO INCREDIBLE! 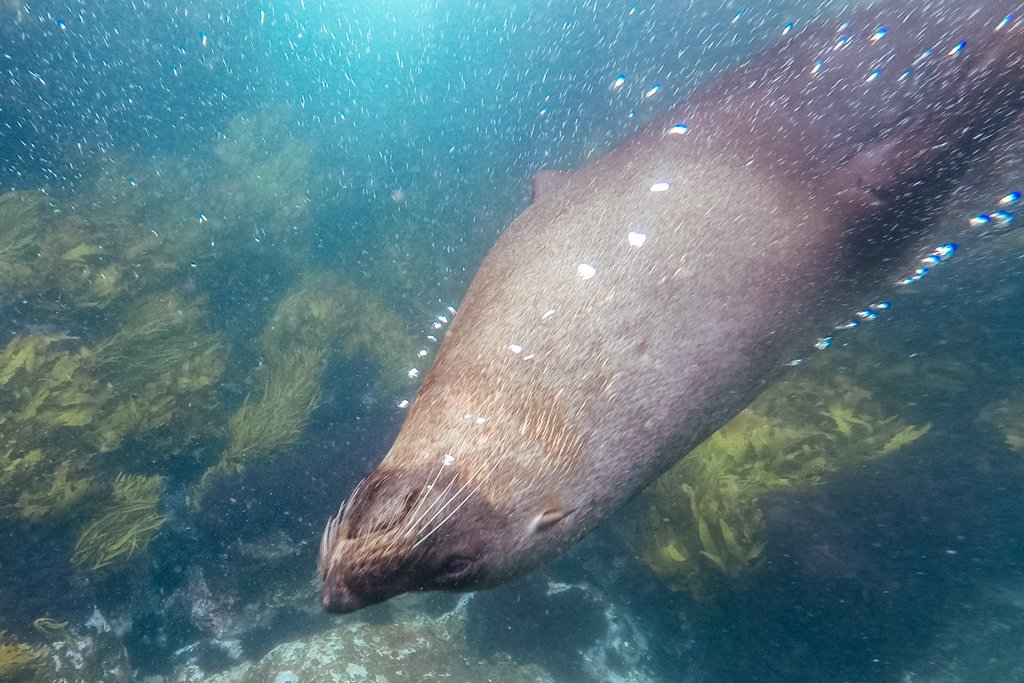 At this snorkel spot there was another little nook between some rocks where we found a few seal pups hanging out. The three of us held onto some rock edges while the current whipped us around a bit, completely enraptured by these adorable little creatures. I swear I’ve never seen Marijs more jubilant!

And have I ever mentioned that when I was a kid, seals were my absolute favorite animal? Yep, at one point I loved ‘em more than cats, if you can believe it.

Seriously though, this was such a special experience for us. I can’t believe I got to swim with seals! And equally, I can’t believe how close these guys came to us – they didn’t seem the slightest bit afraid of people. 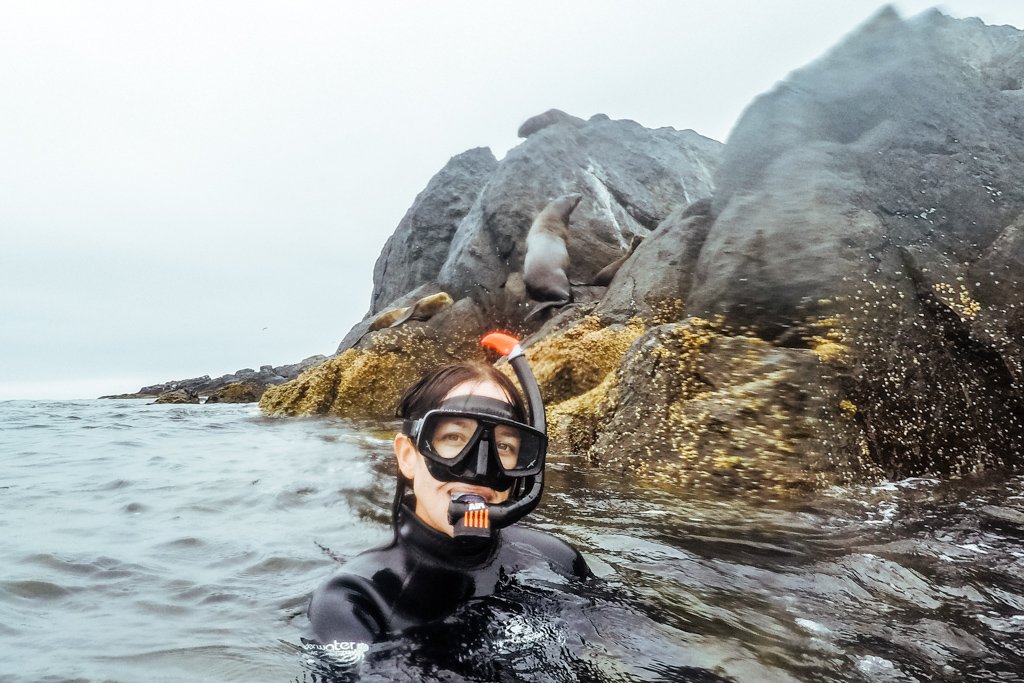 We had about an hour at this location before hopping back on the boat. And that’s when things started getting a little… woozy for me. I swear I felt fine in the water, but as soon as I got back onto the boat it was like delayed onset sea sickness. I ended up skipping the last two (very short) snorkel sessions because I felt too dizzy and nauseous to move myself.

But you know what? I felt very at peace with having to miss out on the last part of the excursion. I felt like I got so much out of just the one snorkel session that it was more than worth it just for that. 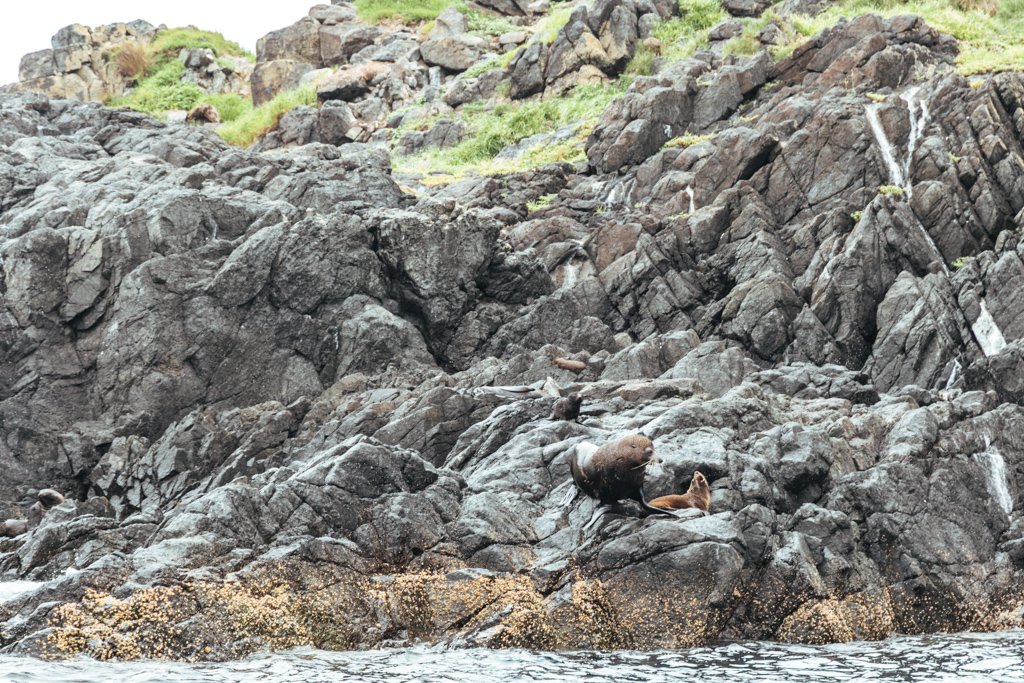 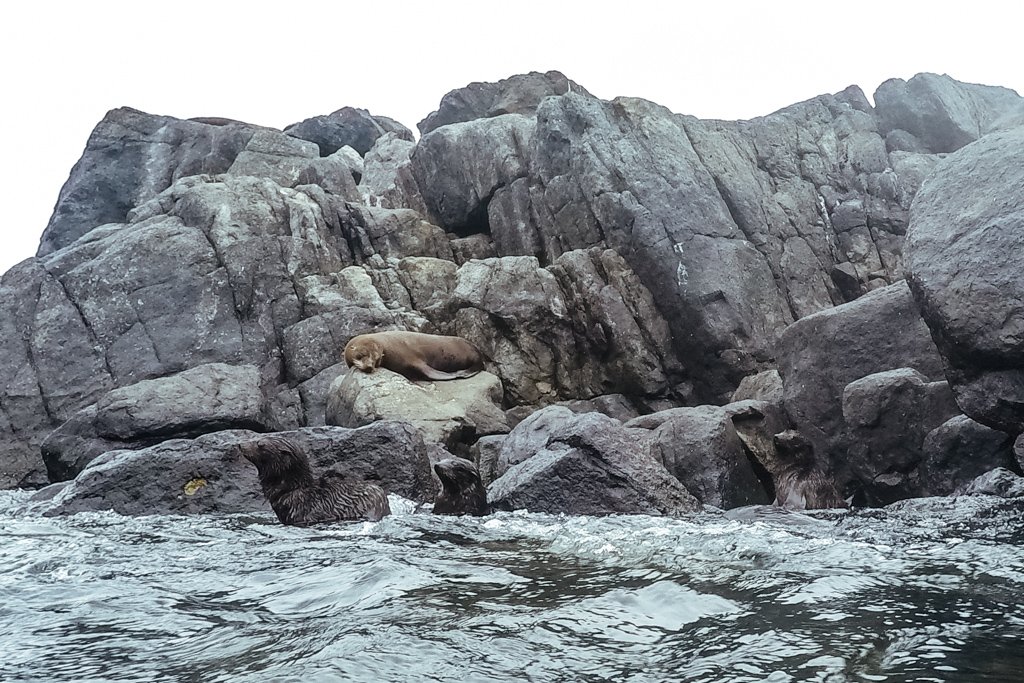 And ugh, bless Francois. He was so nice to me when I was feeling (and eventually getting) sick on the boat, gently talking to me to distract me from the nausea and saying some comforting things that made me feel like it was going to be ok.

As someone who loves to be in control, it is incredibly frustrating not to be able to control my sea sickness or prevent it from happening. All I can ever think is WHY is this happening to me and WHEN will it all be over? I know I shouldn’t beat myself up over it, but I do – and I really appreciate it when whoever I’m with makes an effort to make me feel better. 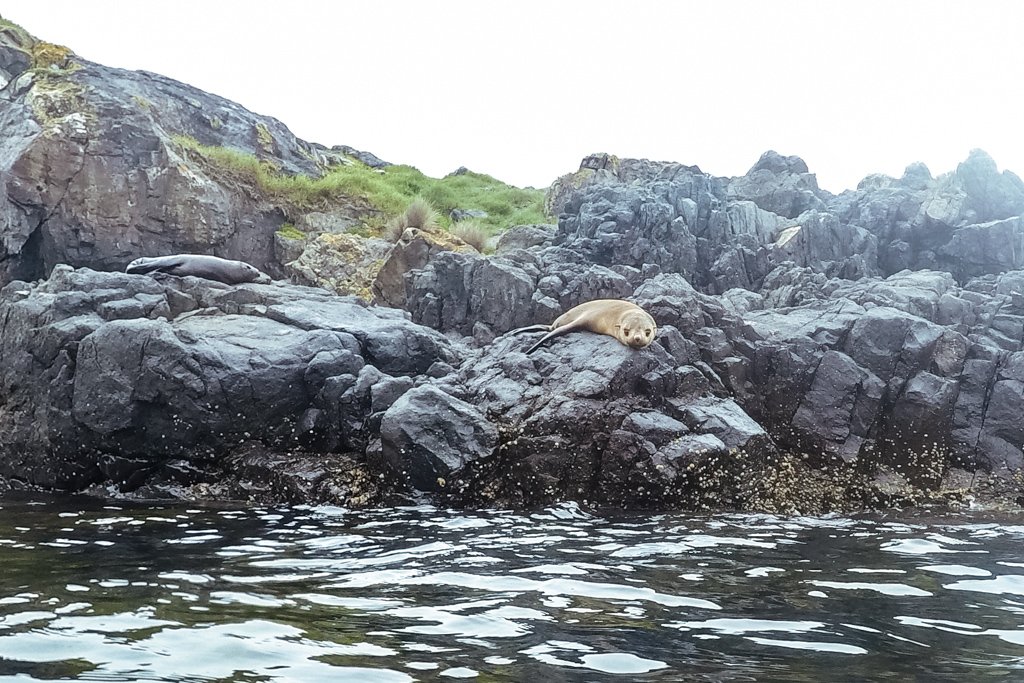 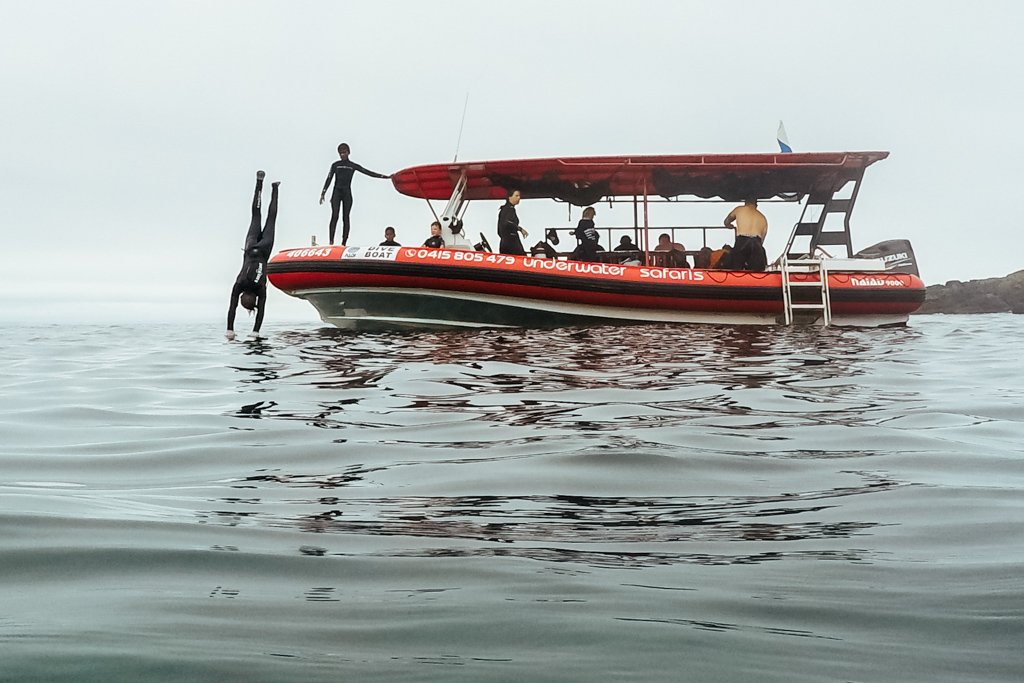 But man, this experience was so epic that a little drizzle and a lotta sea sickness couldn’t tarnish it. In fact, I’d willingly vomit off the side of the boat in front of 10 strangers again if it meant I could swim with these seals one more time.

Thank you to Underwater Safaris for hosting me on a seal snorkeling trip from Narooma. Note that all opinions expressed here and elsewhere on this blog are my unbiased own, and are uninfluenced by any gifts or incentives I may receive.