By the time I made it to the West MacDonnell Ranges on my big Aussie road trip, it had been a couple months since I last glimpsed the sea.

I LOVE the Australian Outback – to me, it feels so exotic, so different from what I’m used to. But if I’m honest, I’ve been secretly pining for the beach pretty much the entire time we’ve been inland. All I want to do is lay in the sand, let my skin soak up the sun, and listen to waves crashing as I fall asleep drooling on top of my Kindle (yes, this was my daily life back in Bondi).

Being smack dab in the middle of Australia, Alice Springs and the West MacDonnell Ranges are about 1500km away from the coast. At the rate we’re traveling (sloooooowly), it’ll be at least another month or two before we make it back to the east coast to resume the beach bum life. 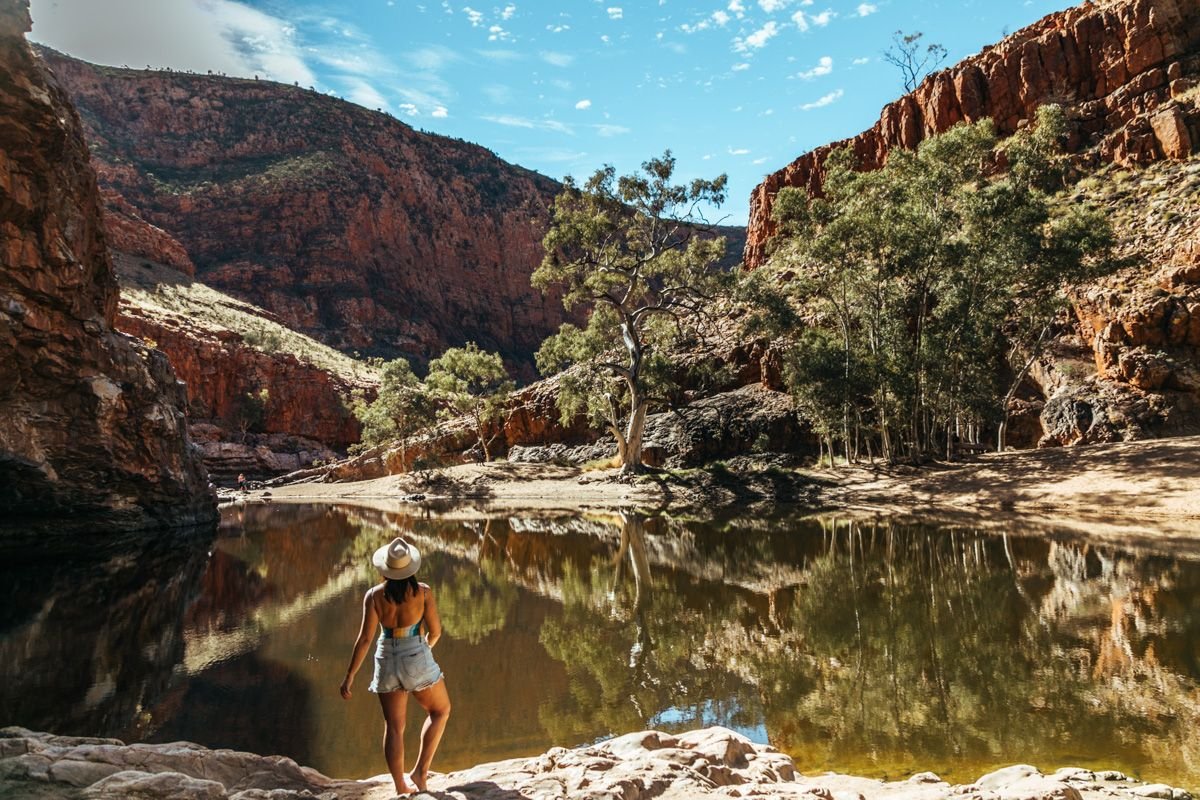 Fellow beach bums traveling the Outback, I have good news for you! If you happen to find yourself in the Red Centre of Australia, starved for ocean, you MUST visit Ormiston Gorge.

Ormiston Gorge is the closest thing to a beach in the Outback. It has sand! It has a swimming hole! You can sunbathe, even in winter!

This place put a pep back in my beach-deprived step and I loved it so much that I returned for a second visit shortly after my first. 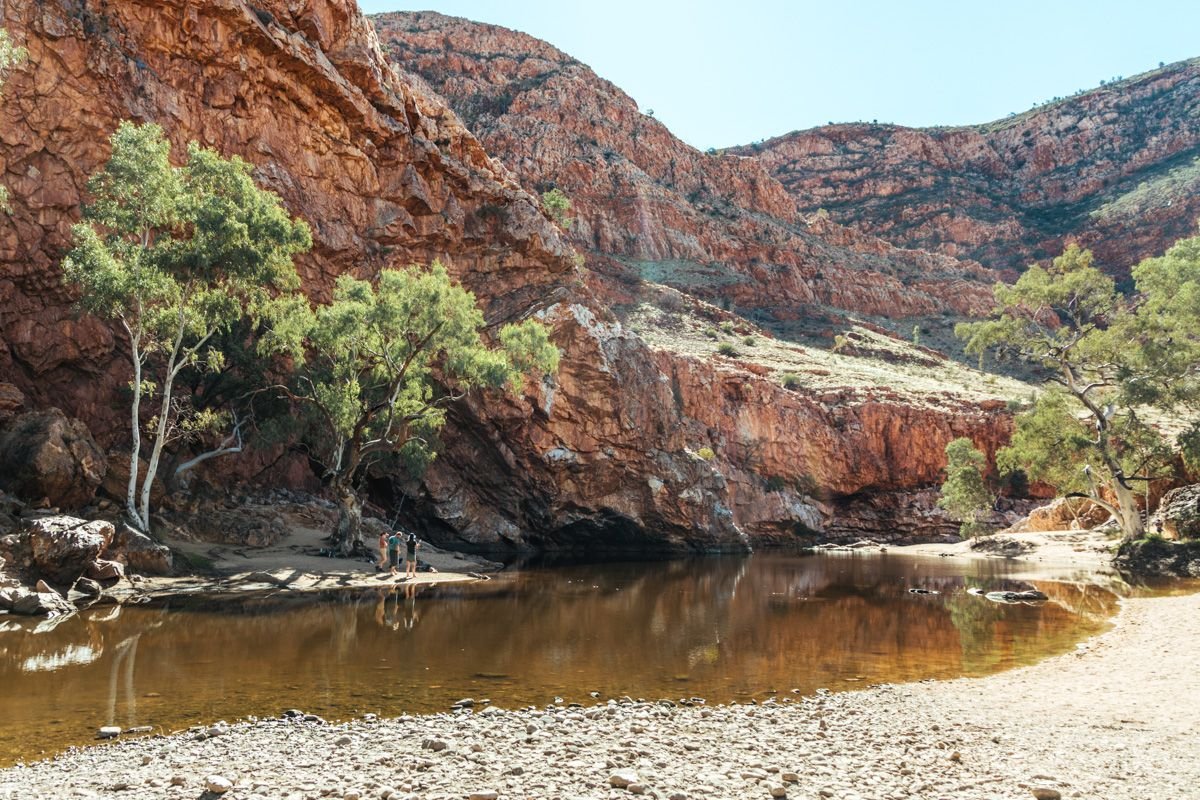 Here’s everything you need to know about visiting Ormiston Gorge near Alice Springs, Australia:

The one thing everyone does when they visit is the easy 300m Ormiston Gorge Waterhole Walk to see the gorge itself. It’s a smooth path, definitely doable in sandals (so no hiking shoes needed).

There are two plots of sand on either side of the gorge swimming hole. The first one is small and right at the end of the path, and it offers what I think is the best view of Ormiston Gorge. I recommend stopping here first, snapping some photos and soaking up the glorious views, and then heading over to the main beach to hang out. 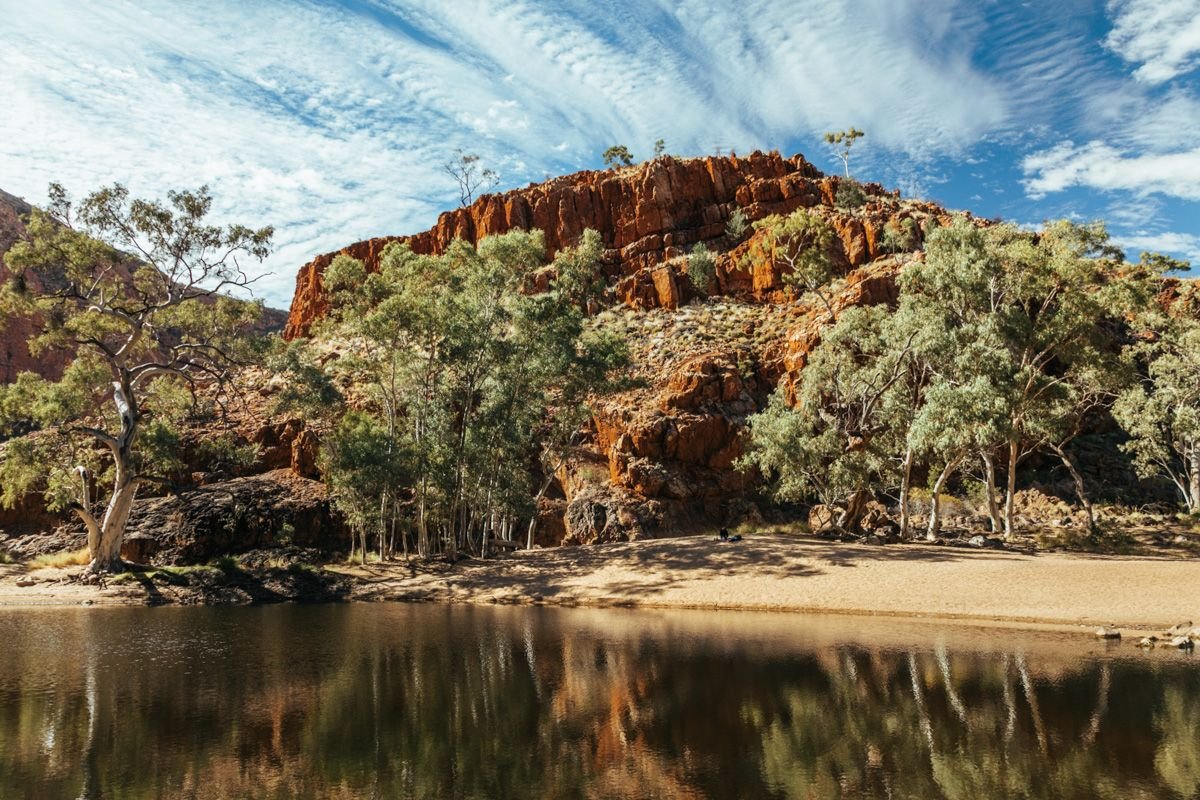 The main beach is on the other side of the swimming hole and stretches all along the edge of it until you reach the boulders leading into the gorge. There’s plenty of room here to spread out and sunbathe or have a picnic in the sand. There’s not much shade though, so if you’re visiting outside of winter when it’s hot and the sun is stronger, definitely wear a hat and bring an umbrella. 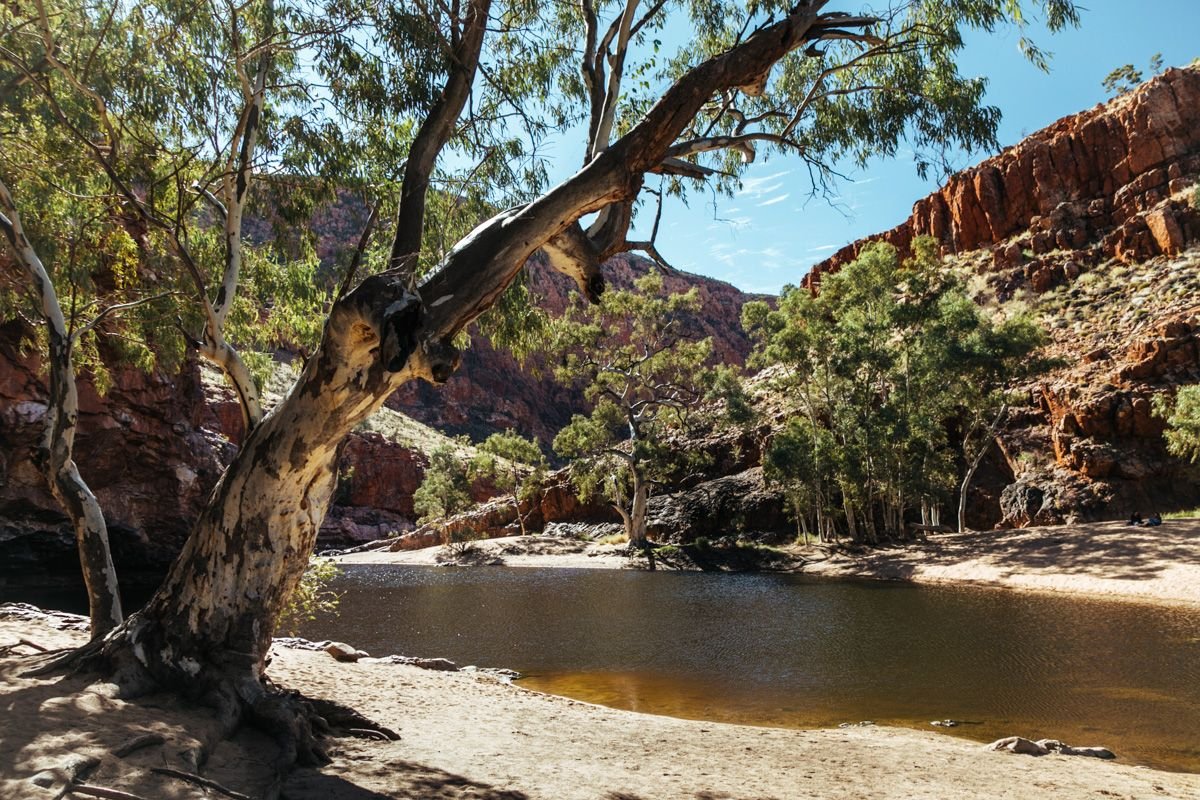 The water at Ormiston Gorge is very cold all year round, so it’ll definitely be refreshing on a hot summer day. Just be mindful of not swimming in it for too long (hypothermia is definitely a thing here!).

The acoustics in the gorge are quite incredible, too. The first time I visited, someone was playing the handpan and it echoed so beautifully. I really wish I’d recorded it because ugh, it was magic! 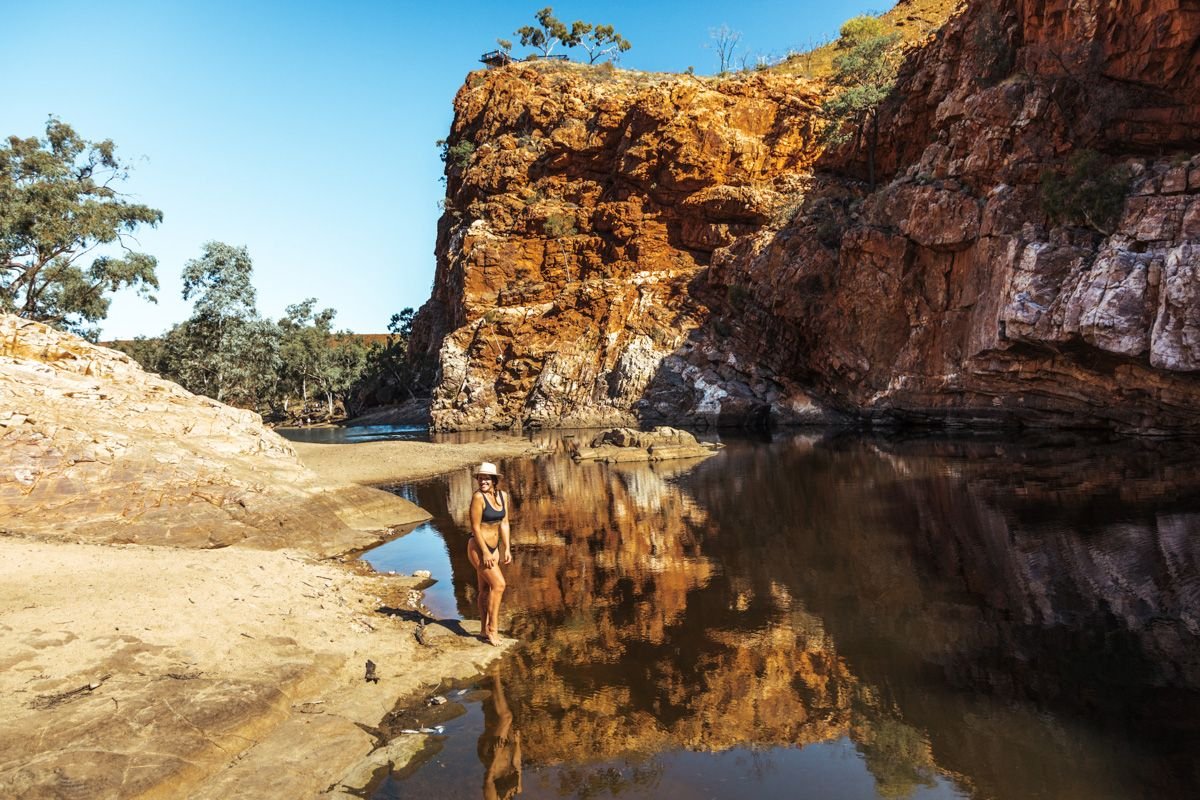 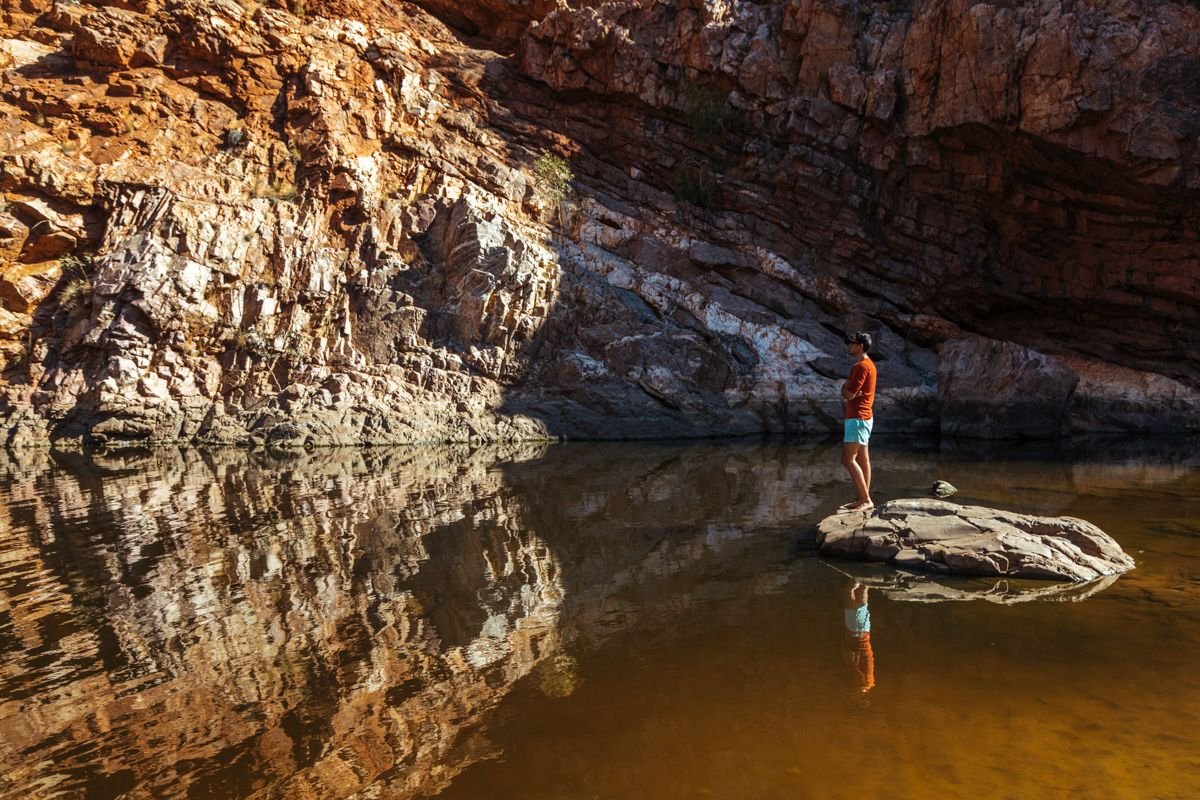 This may be the photographer in me, but one thing that really struck me was how perfect this place is for photography opportunities. The light and shadows are constantly changing in the gorge throughout the day, and there are so many little nooks and angles from which you can admire the gorge.

On my first visit, I didn’t even make it to the main view of the gorge at the small beach area because I was so entranced by the reflections inside the gorge and around the boulders (I went micro, rather than macro… if ya catch my drift!). 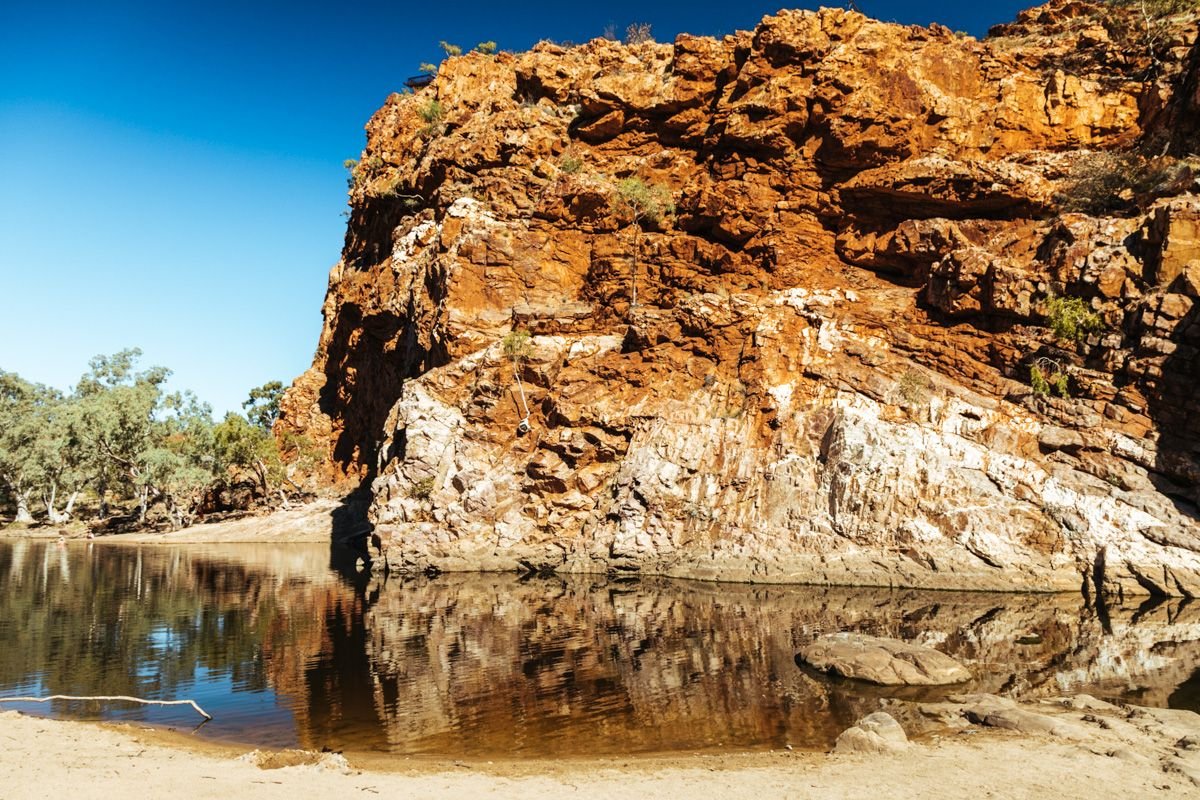 If you can manage to drag yourself out of the gorge, there are some VERY worthwhile Ormiston Gorge walks you can complete:

When you look up to the top of the gorge from inside of it, you might be able to spot a viewing platform. This is the Ghost Gum Lookout, which you can reach via a 1.2km return walking trail that starts near the information plaques by the car park. The hike up there looks more arduous from down below than it actually is. 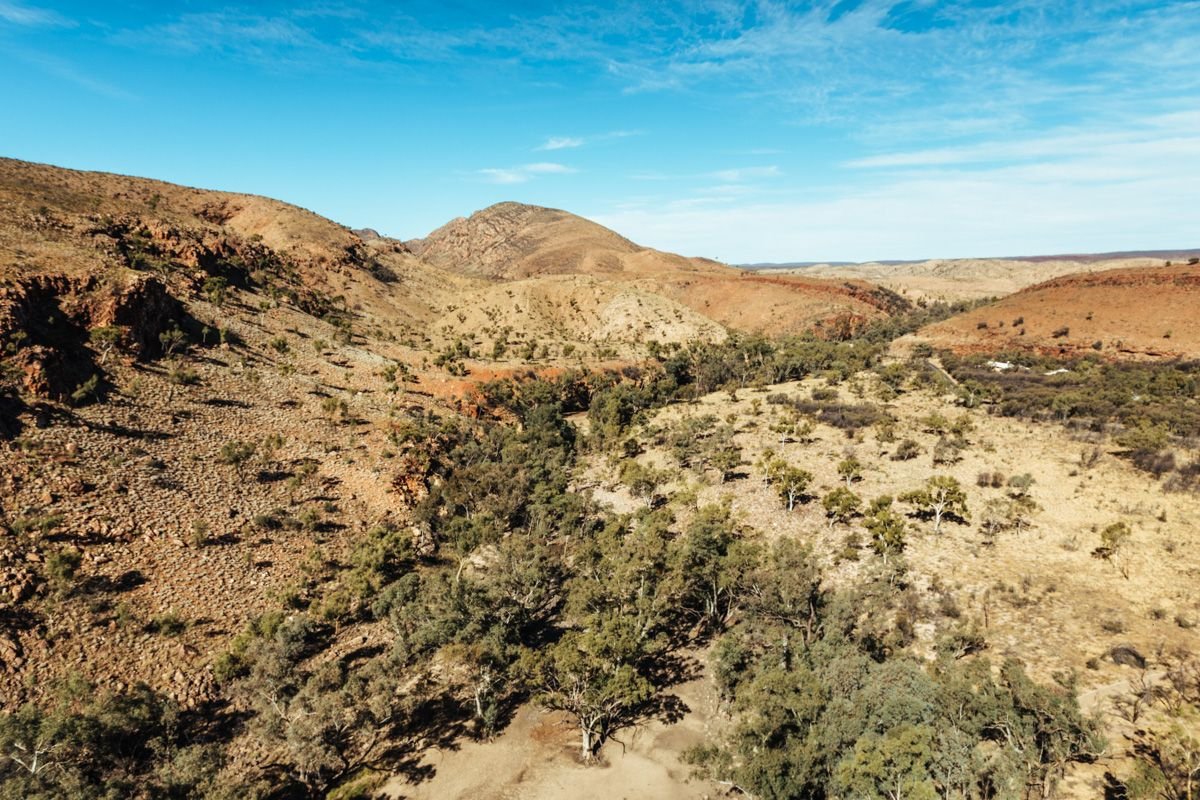 They have the Ghost Gum Lookout down as a 45 minute return walk, but it only took me 15 minutes to get up there and less to walk back down (let’s say 25 minutes return). But if they’re including time spent ogling the views from the platform then I may very well have spent 45 minutes on the whole outing.

Between the view of gorge below and the views out toward the mountain ranges, you’ve got plenty of natural beauty to feast your eyes on. And again, it will look very different if you’re up here in the morning vs. the afternoon because of where the sun is in the sky.

I walked up here in late afternoon and the light out over the ranges was PERFECT; the light inside the gorge, not so much (it was very shadowy). It’ll be the opposite if you’re at the lookout in the morning, so choose your hike time according to what you’d rather see in perfect light. 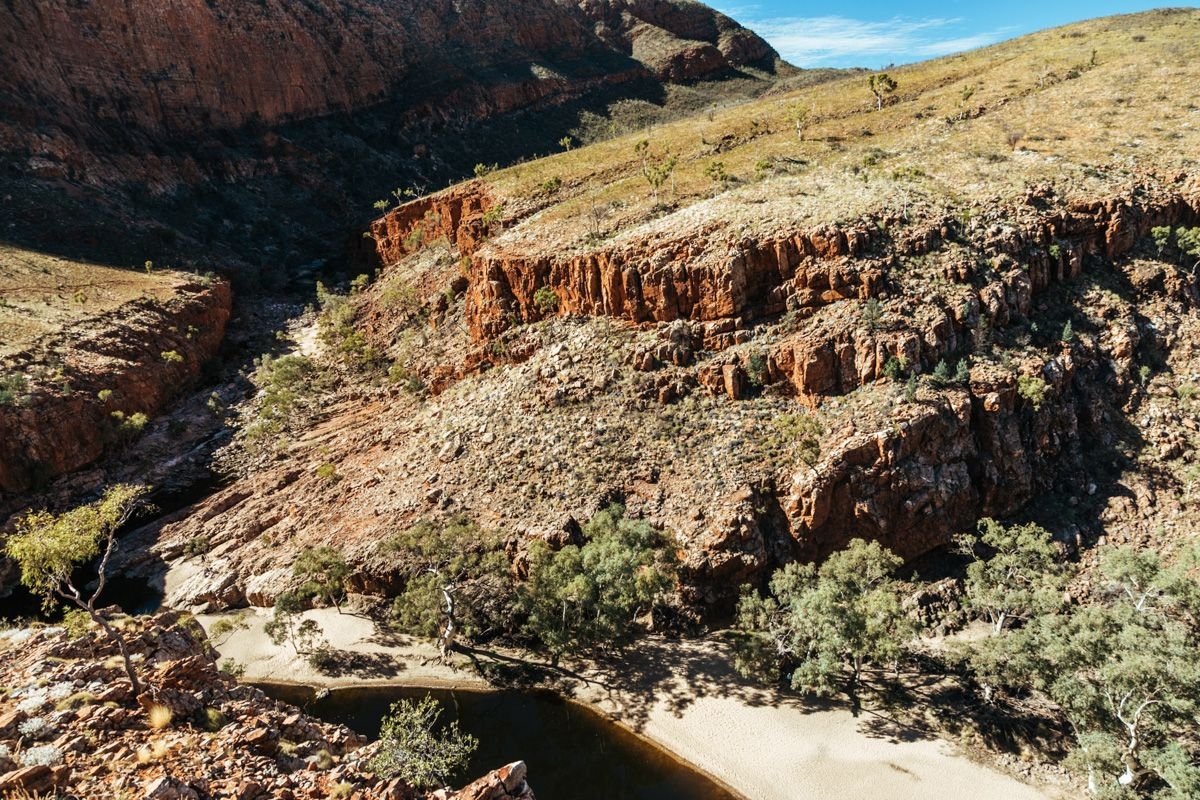 From the Ghost Gum Lookout, you can either walk back down the way you came, or continue on what turns into the Ghost Gum Walk, a 2.5km loop walk.

This trail follows the western side of the gorge before descending into it. Then you’ll hike back to the waterhole over boulders and through the rocky creek bed (you’ll definitely need sturdy shoes for this hike!).

If you have a few hours to spare, the Ormiston Gorge Pound Walk is an absolute STUNNER of a hike. It’s an 8.5km loop walk that winds through the ranges, over and into the pound, and back through the gorge to the waterhole (coming in from the east side). 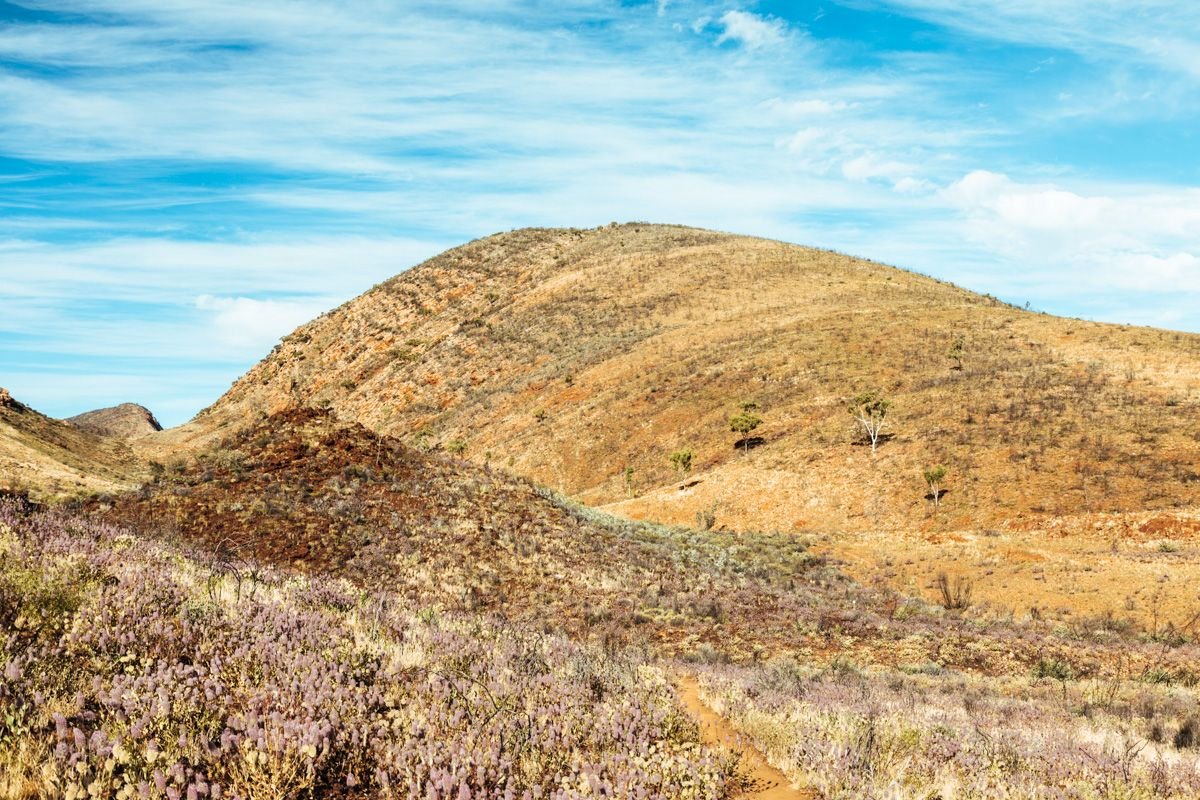 I was getting some serious Valley of the Winds vibes on the first segment of the Pound Walk, the part that goes through the ranges. It reminded me so much of my beloved Kata Tjuta walk with all of the yellow grass and purple wildflowers scattered around the orange rock, backed by a deep blue sky. I think the Pound Walk is blessed with more birdlife though, as I shared the trail with what must have been hundreds of little birds (and precisely 0 other humans).

If you’re short on time like I was, you should at least hike to the first marked viewpoint on the trail map. This is “the top”, or the view from above the pound – you will definitely know it when you see it. From here, you can turn around and retrace your steps back to the car park. If you do it this way, you’ll only need at most 1.5 hours, rather than the 3-4 hours they recommend for the whole loop. 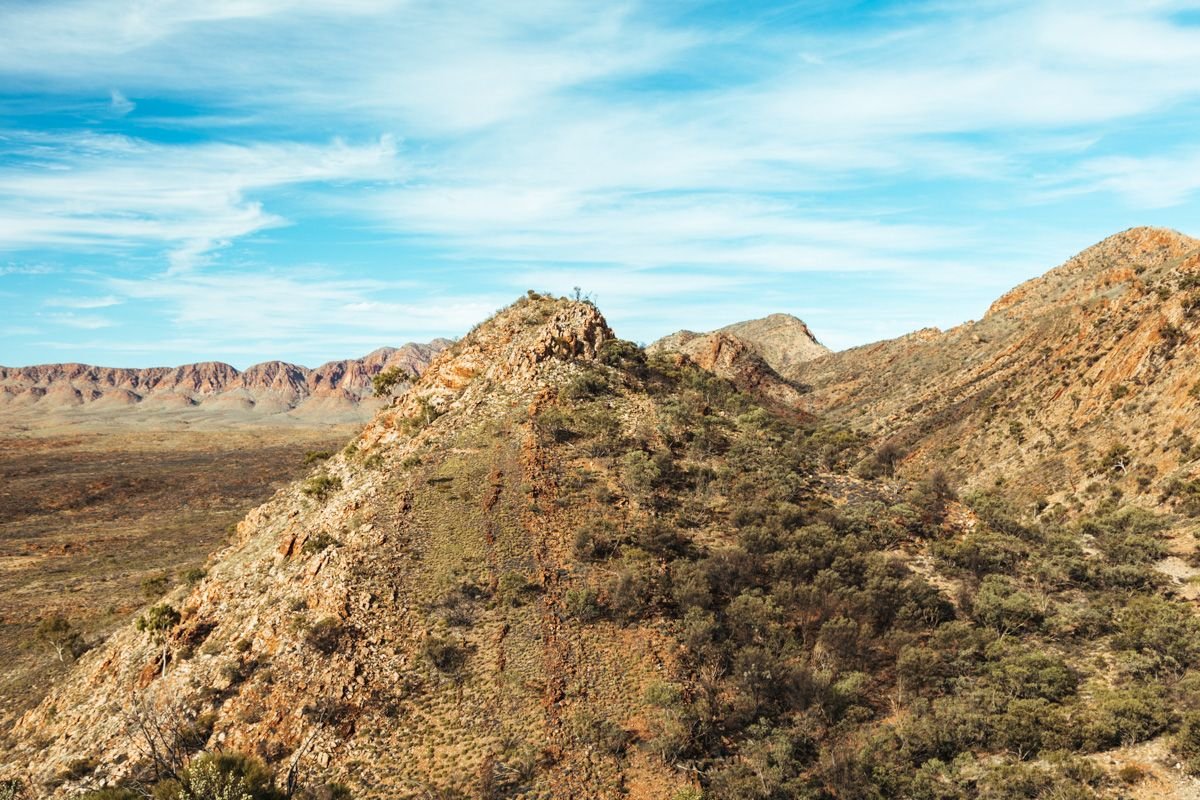 If you want to complete the full loop, you’ll carry on and follow the trail down into the pound and back to the gorge. This segment of the walk is very flat and probably the least exciting part of the hike (I say probably because I didn’t actually hike it, but I saw it from above).

The end of the Pound Walk trail will merge with the end of the Ghost Gum Walk trail as it reaches the gorge, with both trails making their way through the dry creek bed and back to the waterhole. 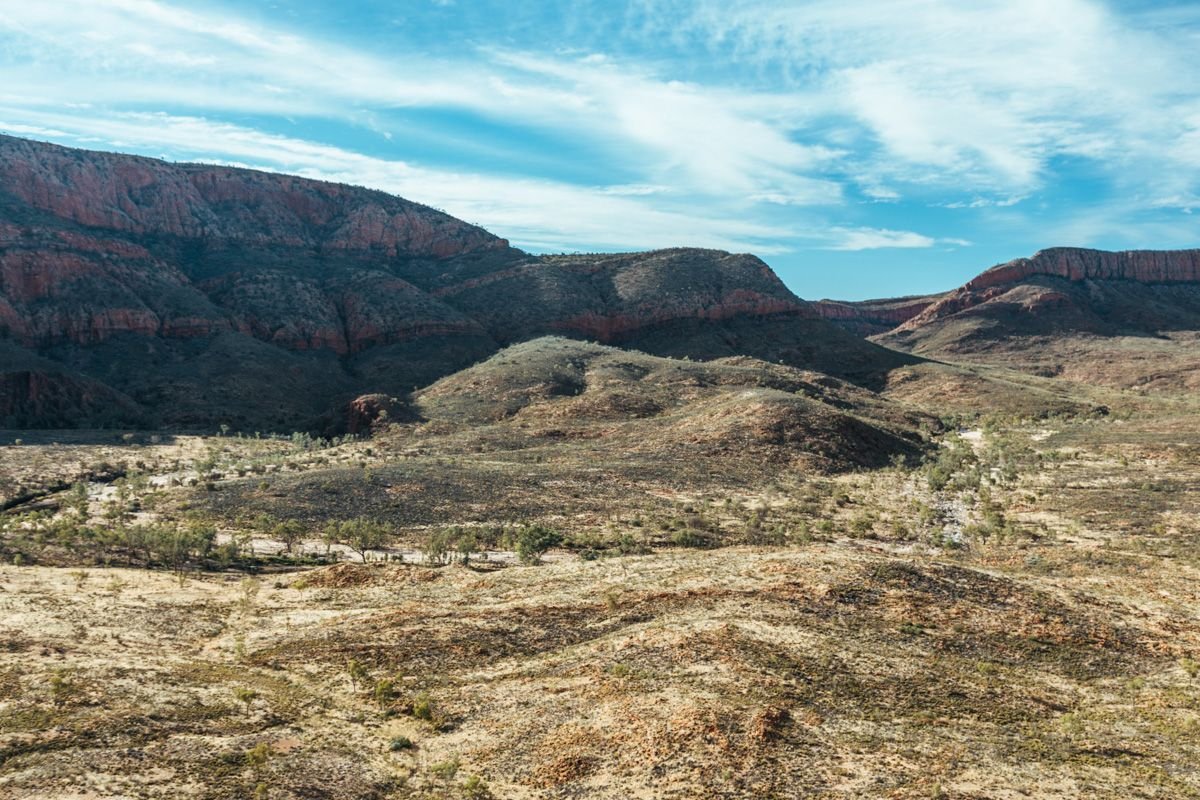 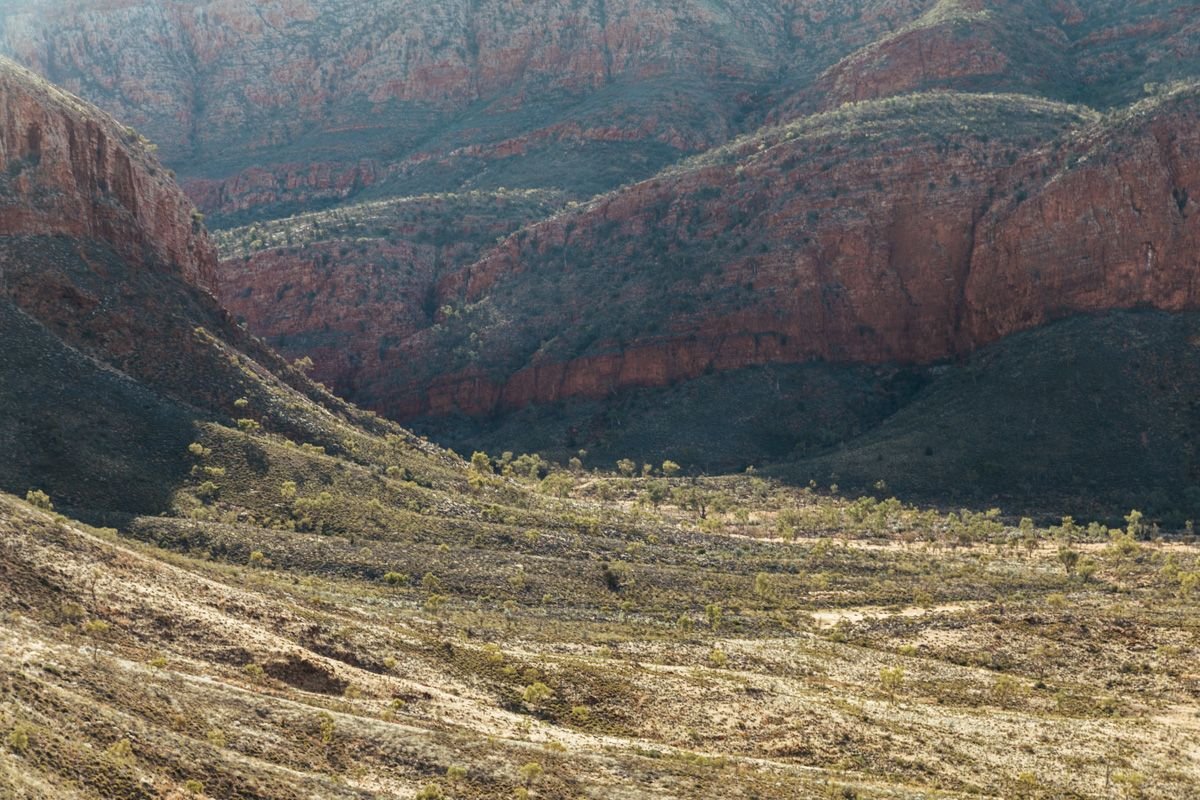 Can you do the Ormiston Gorge Pound Walk in the opposite direction? Sure, but it’s better to do it counterclockwise because of how the trail is marked. Also, it’s much more dramatic when you reach the top and catch your first glimpse of the pound, rather than walking through it first.

As with most gorges in the West MacDonnell Ranges, the 230km Larapinta Trail makes its way through Ormiston Gorge.

You can pick up sections 9 and 10 from Ormiston Gorge, opting to do just a small segment as a day hike, or as part of a multi-day hike. 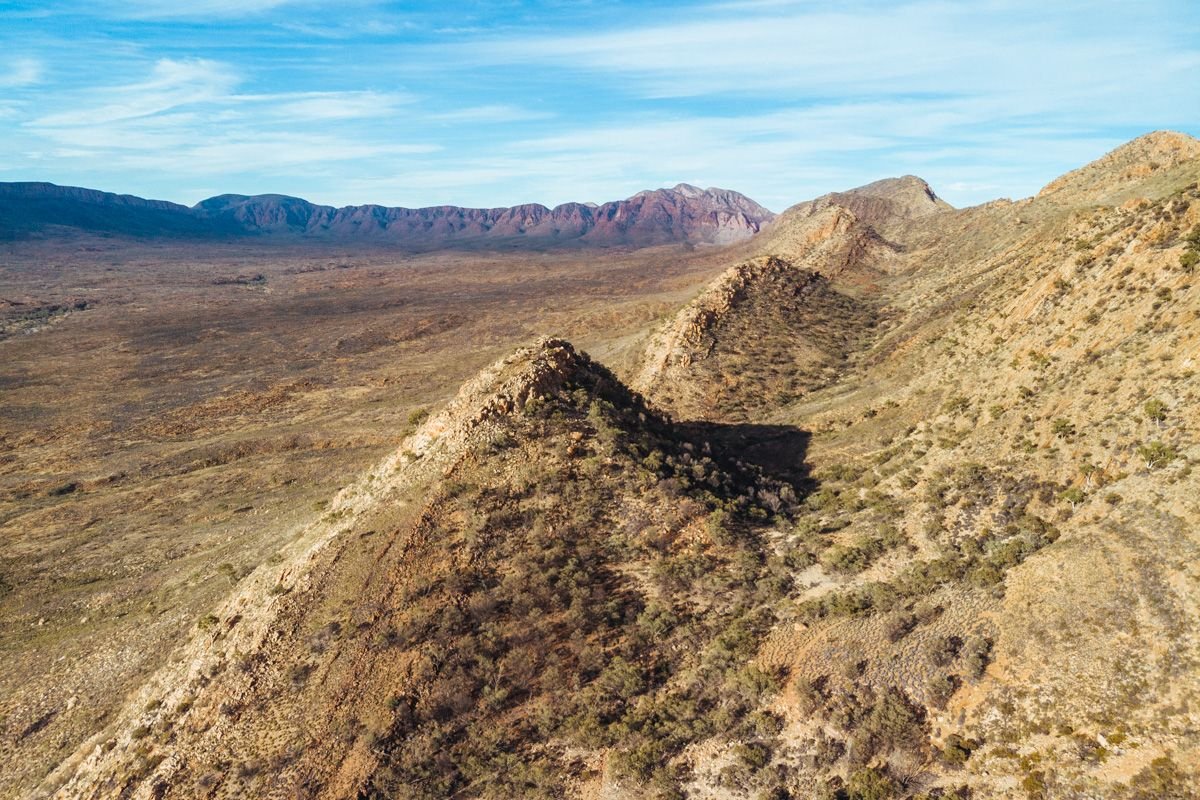 Having explored all of the (accessible) gorges in the West MacDonnell Ranges, I can tell you that you’re going to want to allot the most time to Ormiston Gorge. Not only is this a place you’ll want to linger, but there’s also lots of walking to do here.

Therefore, I’d highly recommend staying at the Ormiston Gorge Campground, which is $10/night per person (cash only + it’s first come, first served). This way you’ll have time to enjoy everything the gorge has to offer, and you’ll be able to catch the light at varying times of day. 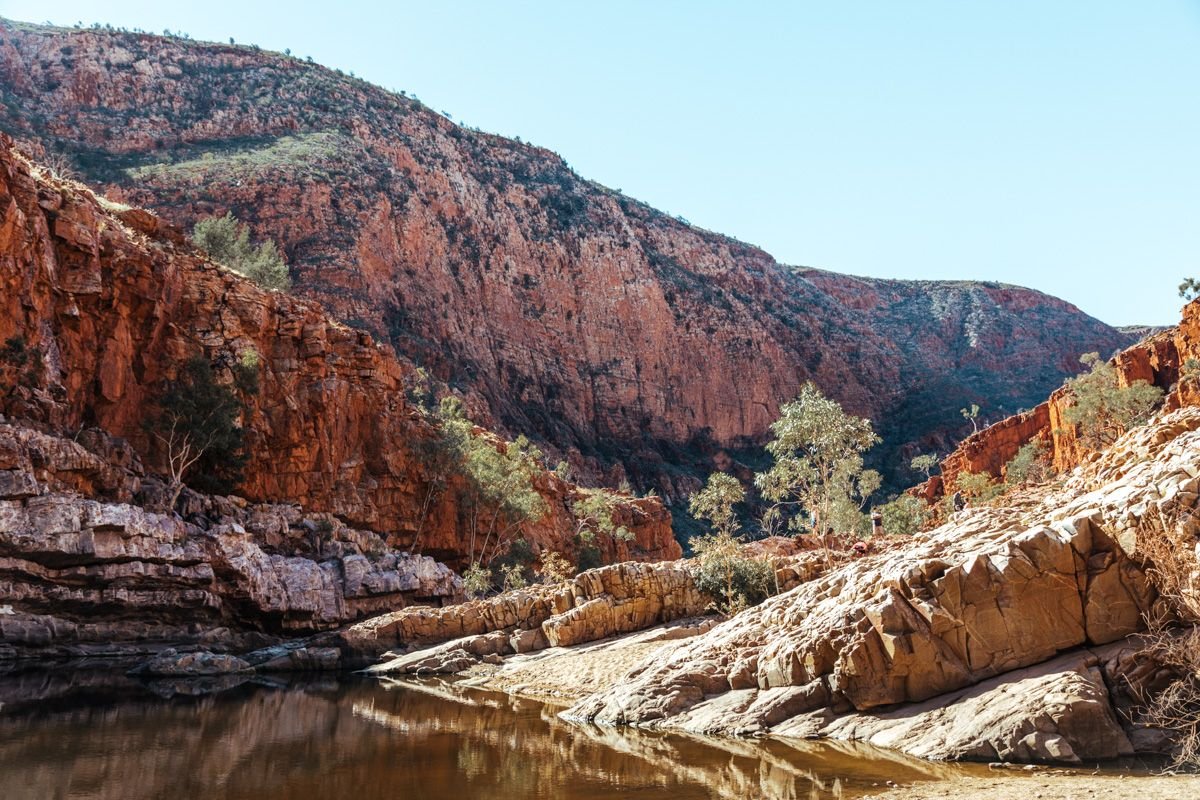 There are BBQs, water, and toilets onsite at the Ormiston Gorge car park. There are even showers available for campers (I believe they unlock them later in the day, after the day trippers have gone).

There’s also a cafe kiosk there, which was open daily from 10-4 when I visited in June 2021. The hours do vary seasonally though, so you may want to bring some snacks just in case. They sell coffee, sandwiches, and smoothies, among other things. 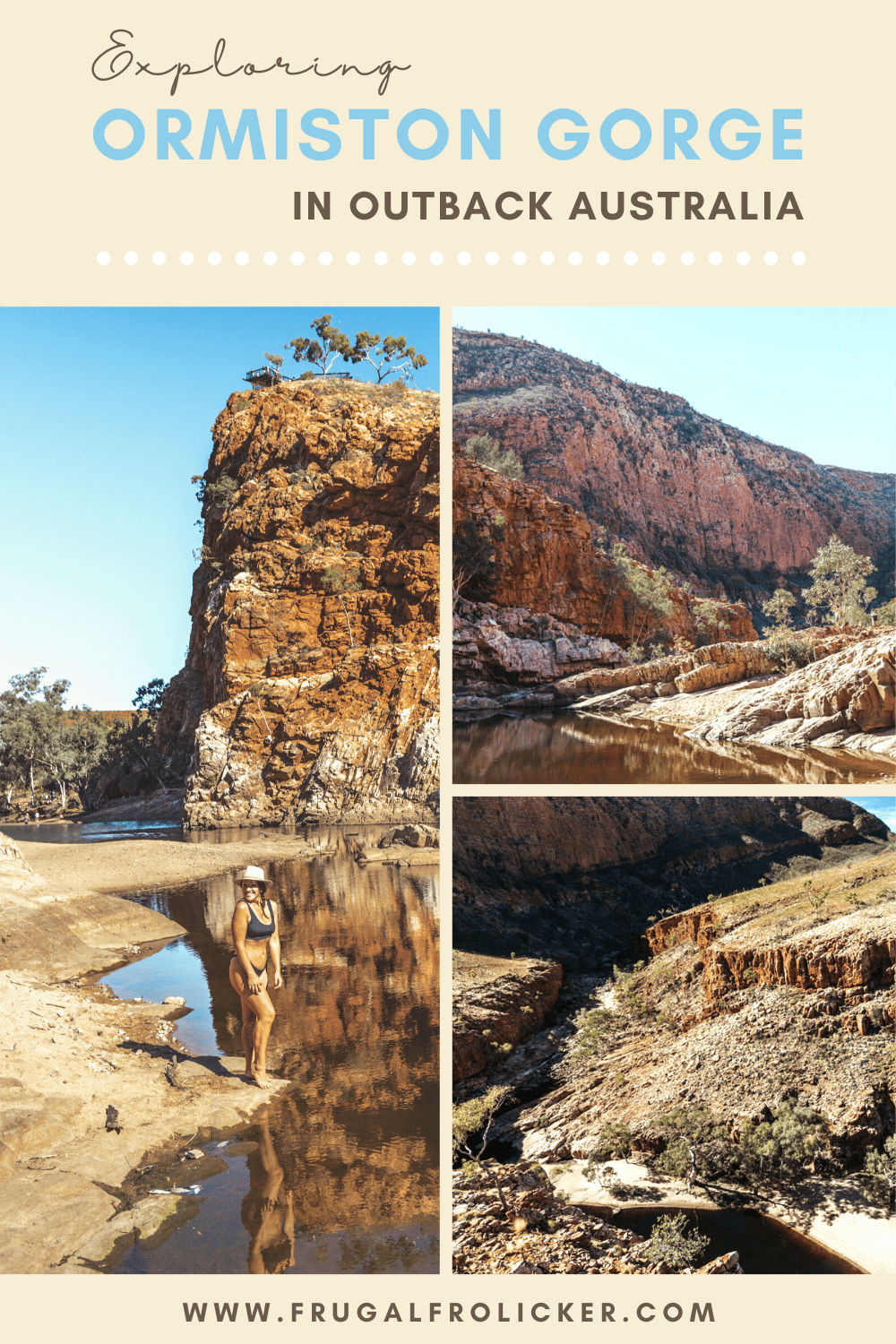 As of June 2021 —
It’s about a 1.5 hour drive from Alice Springs to Ormiston Gorge. There’s no mobile phone reception out there at all, but the roads are clearly signposted and it will be very obvious where to turn for Ormiston Gorge, as well as which way to turn when heading back to Alice Springs.

It costs $10/night per person to camp at the Ormiston Gorge Campground. This fee is payable by cash only, and sites are first come, first served (no bookings).

You’re allowed to fly a drone at Ormiston Gorge if you have a permit, which you can apply for here (mine was approved within 24 hours). However, be respectful and don’t fly it if people are nearby.