This is a guest post by Melissa Douglas of High Heels & A Backpack.

If you had told my eighteen year old self that ten years later I would be living in Athens and working as a full time travel blogger I probably would have laughed. Sometimes life doesn’t work out the way we planned, and sometimes veering off the path that we created for ourselves winds up being the best thing after all.

I have been obsessed with travel for as long as I can remember. I grew up working class in the UK so when I was younger, I didn’t really have much opportunity to explore different countries. I worked throughout high school and university and when I was 19 I was able to take my first independent trip – to Egypt and Morocco! After that I was hooked.

I always though that having a “good” corporate job was what I needed to do. My logic was that if I earned a lot of money, I would be able to afford lots of exotic trips. It was that mindset that encouraged me to go to business school and then to do my postgraduate studies in supply chain engineering.

Supply chain engineering is every bit as exciting as it sounds, aka not at all. Also, men frown at you strangely when you tell them that you wrote a 20,000 word thesis on integrating the supply chain to optimize performance on automotive manufacturing. Maybe the qualification is worth it for their reactions alone? I digress… 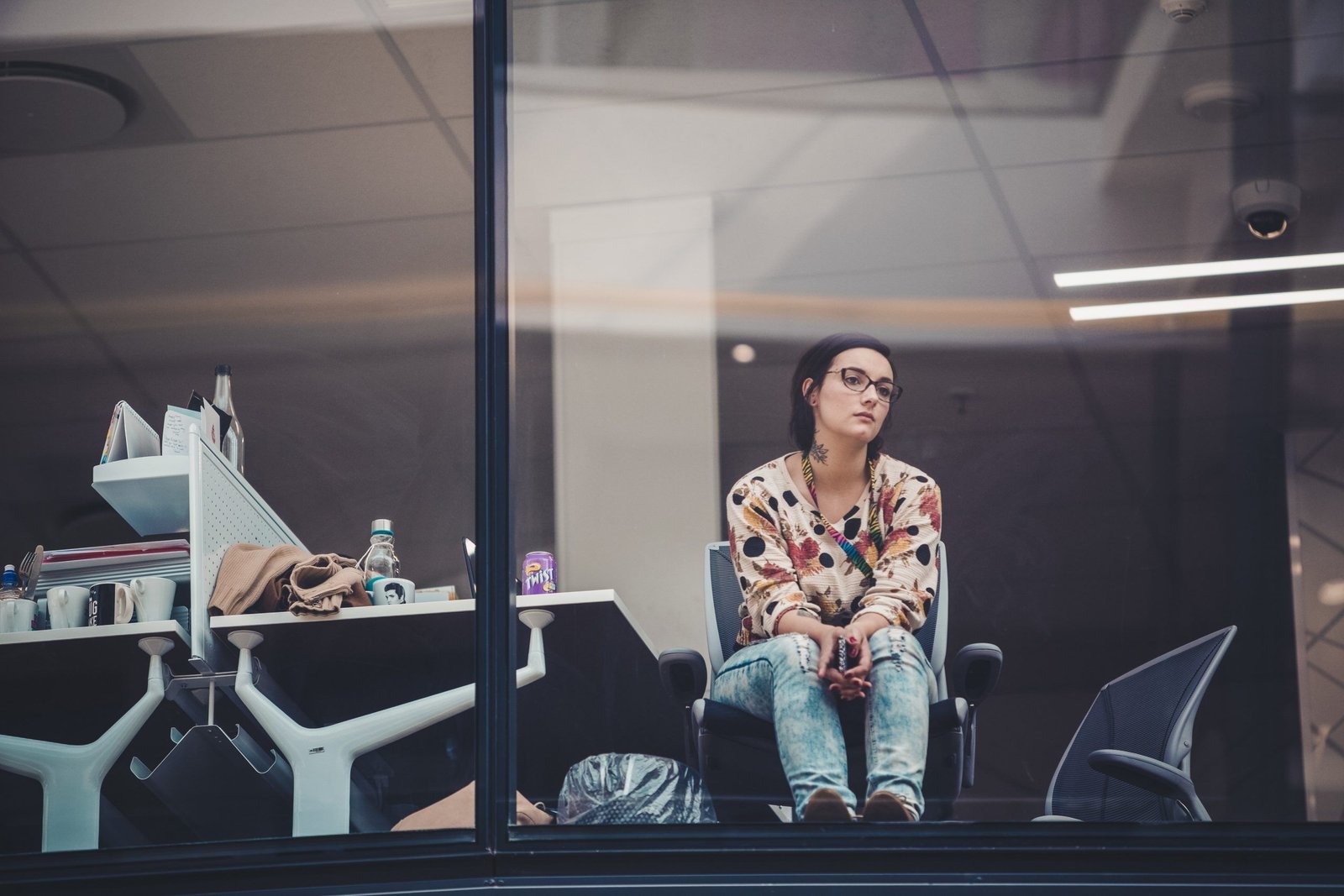 Photo by Johnny Cohen on Unsplash.

Disillusioned by the Corporate World & Starting a Blog

When I graduated business school, I secured a wonderful graduate job and I worked as a Fabric Buyer. I was responsible for sourcing all of the company’s raw materials and managing a $15 million spend portfolio. The pay was great, but I was always working late at the office and barely had a personal life. I took a vacation to Japan and South Korea and one of my friends suggested starting a blog about my travels for fun.

When I started my blog it was terrible, I am under no illusions about that. I had absolutely no clue about writing nor SEO, and I tried too hard to be funny. My posts were all higgledy piggledy with blurred photographs and editing that looked like it had been done by an eight year old. I didn’t make any money from my blog for several years, but it was my passion for writing that encouraged me to keep it up.

I joined various blogging groups and forums and wondered if there were so many people making a living from blogging, why couldn’t I do the same? So I taught myself about SEO and writing compelling content.

Working 50+ hours a week in a corporate job meant that I never really had the time to write anything, though. I often found myself gazing out the window at work wishing that I was somewhere else and that I had more time to concentrate on my writing.

Photo by Sunyu Kim on Unsplash.

I had fallen completely in love with Seoul during a previous trip to Korea and as I researched the idea of becoming an ESL Teacher in Korea, I became more and more excited at the prospect. I had several friends that were teaching English abroad and it seemed like a viable option.

Most importantly, teaching at a language academy meant that I only had to teach for 20 hours a week and I could use the rest of the time to concentrate on my blog. I figured I’d try it out for a year and if it didn’t work, I could always come home and find another corporate job.

It probably sounds a bit extreme to just suddenly up and move to the other side of the world. If I had loved my job, or if I had gotten a mortgage and was somewhat tied down, perhaps the decision would have been more difficult. Because I was already in a position where I almost dreaded going in to work each day and always daydreamed about being elsewhere, I didn’t really struggle over the decision to move. I felt relieved to change my reality. 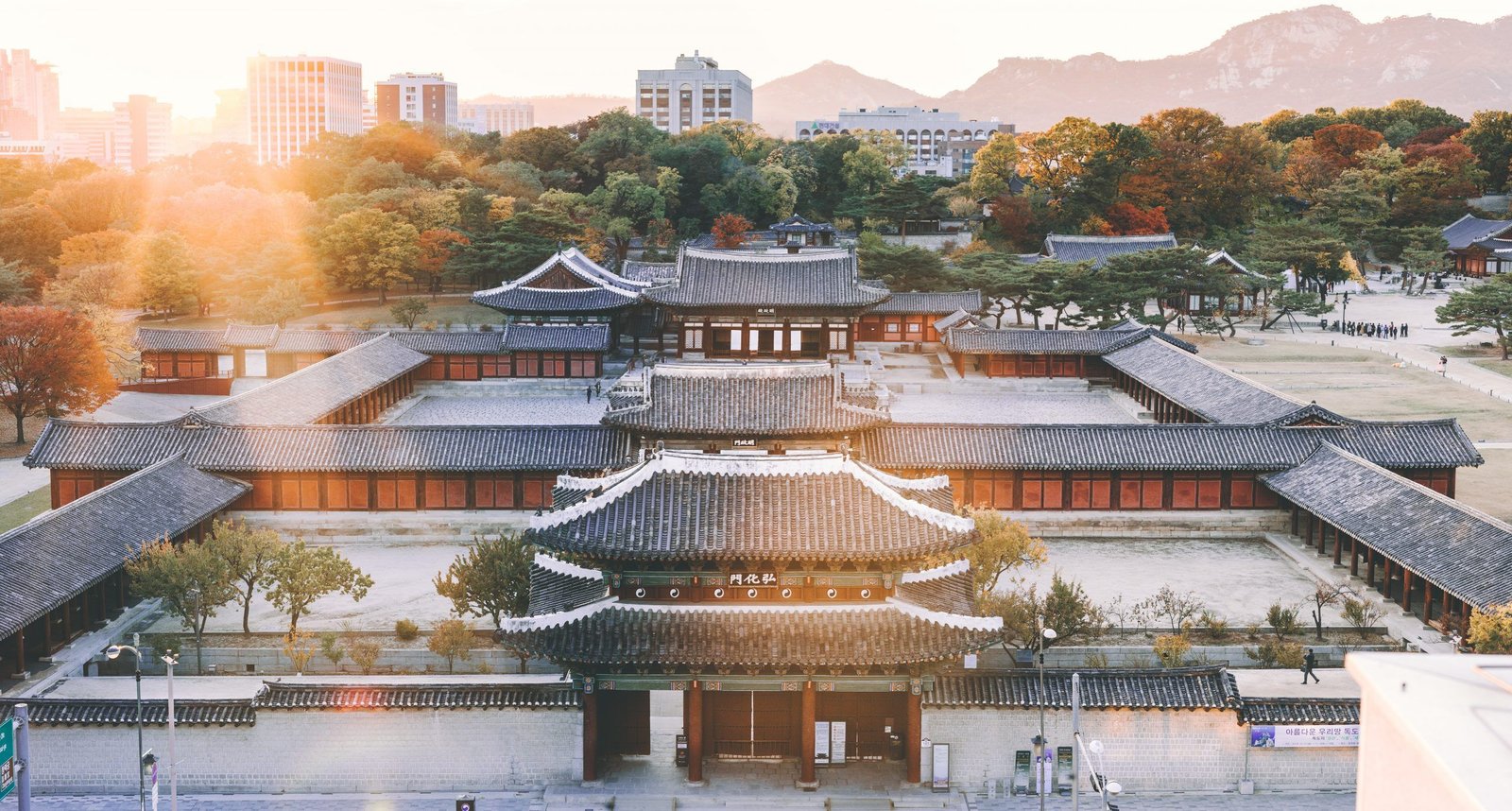 Photo by Bundo Kim on Unsplash.

Living in South Korea gave me plenty of things to write about. I started reviewing local businesses, hotels, spas and restaurants on my blog just for fun. I figured that I could use my blog as a portfolio to help me secure freelance writing contracts in the future.

One day I received an email that would give me all the confidence I needed to make it as a travel writer: the managing editor from Forbes had found my blog and asked me to review hotels and spas in Seoul for them! I almost fell off my chair when I opened the email, and suspiciously examined it for a while to ensure it was legit.

The Costs of Moving to Korea

The fortunate thing about going to teach English in South Korea is that your employer covers a lot of your expenses for you. This is good because despite earning a really respectable salary in the UK, I was terrible with money in my early twenties (have since become better at managing my finances and even bought an apartment!). I used to spend all of my money on expensive clothes, shoes and vacations so I only had about $1000 saved up to take with me to Korea.

Your employer in Korea pays for your flights, collects you from the airport on arrival, AND pays for your apartment. When you arrive in Korea, they also pay for all of your health checks, your alien registration card, etc. The only outlay that you really have to pay out in advance is for your visa to be processed at your local embassy (usually around $150). 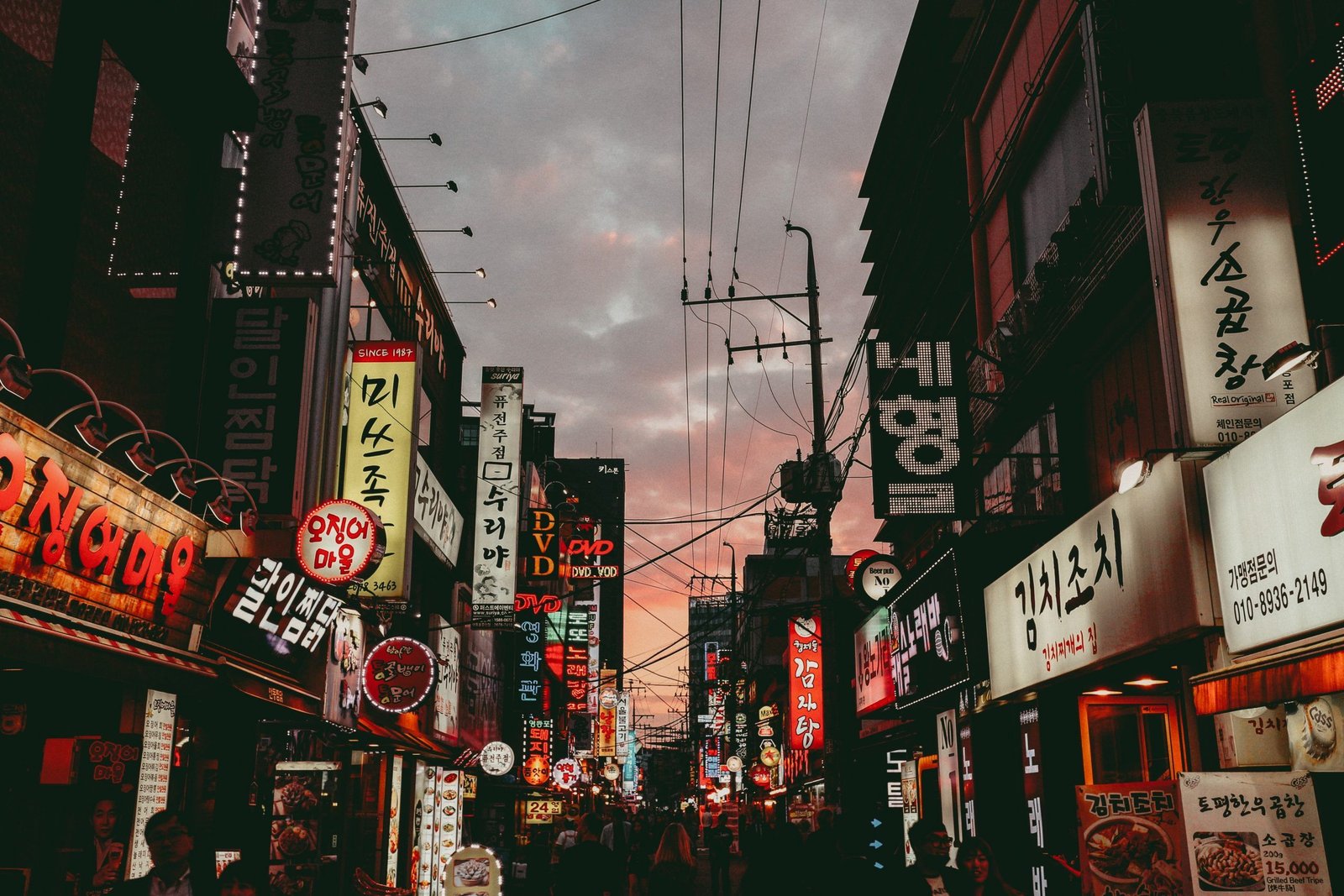 Photo by Saveliy Bobov on Unsplash.

Most English teachers in Korea earn between $1300 – $1500 a month. That doesn’t seem like much when you compare it to salaries in the US, the UK, or Australia, however when you consider that your rent is already paid for, that’s a lot of disposable income. And remember, you’re only working 20 hours/week as a teacher.

The cost of living in South Korea is generally much lower than in western countries, and most employers place you in an apartment directly next to the school you are teaching at so there are no transportation costs. The only thing you have to think about is food and electricity (my electricity bill was usually less than $100 a month).

I juggled writing for Forbes and teaching English for awhile. But as my teaching contract was coming to an end, I decided that as much as I loved Seoul, it was just a little far away from all of my friends and family in the UK.

I wasn’t making any money from my blog at that point but I had secured a few freelance writing contracts through Upwork. To be honest, it was a little early to dive in at the deep end – I probably made just around $700 a month at first, but I figured it was now or never.

So I left Korea, spent a bit of time living in Italy, and then ended up moving to Greece. I never expected to fall in love with Athens as much as I have, but three years later, I’m still here. 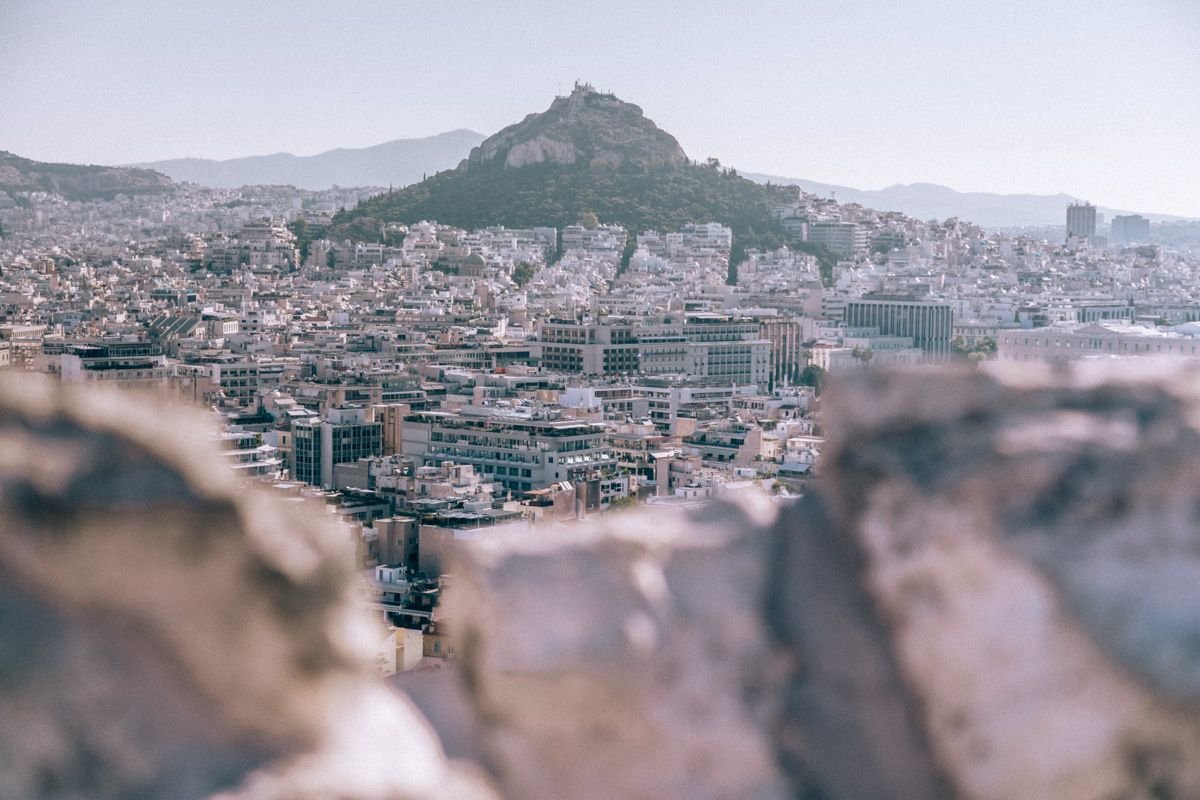 My original intention was actually to stay in Athens for just two months and then maybe return to Korea. I met a great group of people in Greece and I liked the Mediterranean lifestyle so much that I kept extending my stay, and extending my stay. It made sense to eventually register for permanent residency and somehow Athens has become my accidental home base.

Finding freelance work through platforms like Upwork is hard. The jobs are not always well paid, the field is competitive, and you have no job security. After two years of struggling doing random freelance jobs I decided to concentrate all of my efforts on my own blog.

I gave up all of my clients and guaranteed paid work to take a chance with my website. I was able to get my traffic to a high enough level to work with a respectable ad company (Mediavine) and I started making money through affiliate links. In hindsight, I wish I had taken some form of blogging course from the beginning or invested into my website sooner, but everything is a learning curve. I am grateful that I can finally make a living doing what I love: traveling the world and writing about it.

I now work full time on my blog. Occasionally I write freelance work for other people (including Forbes), however I prefer to keep all my writing work for myself and my own site. 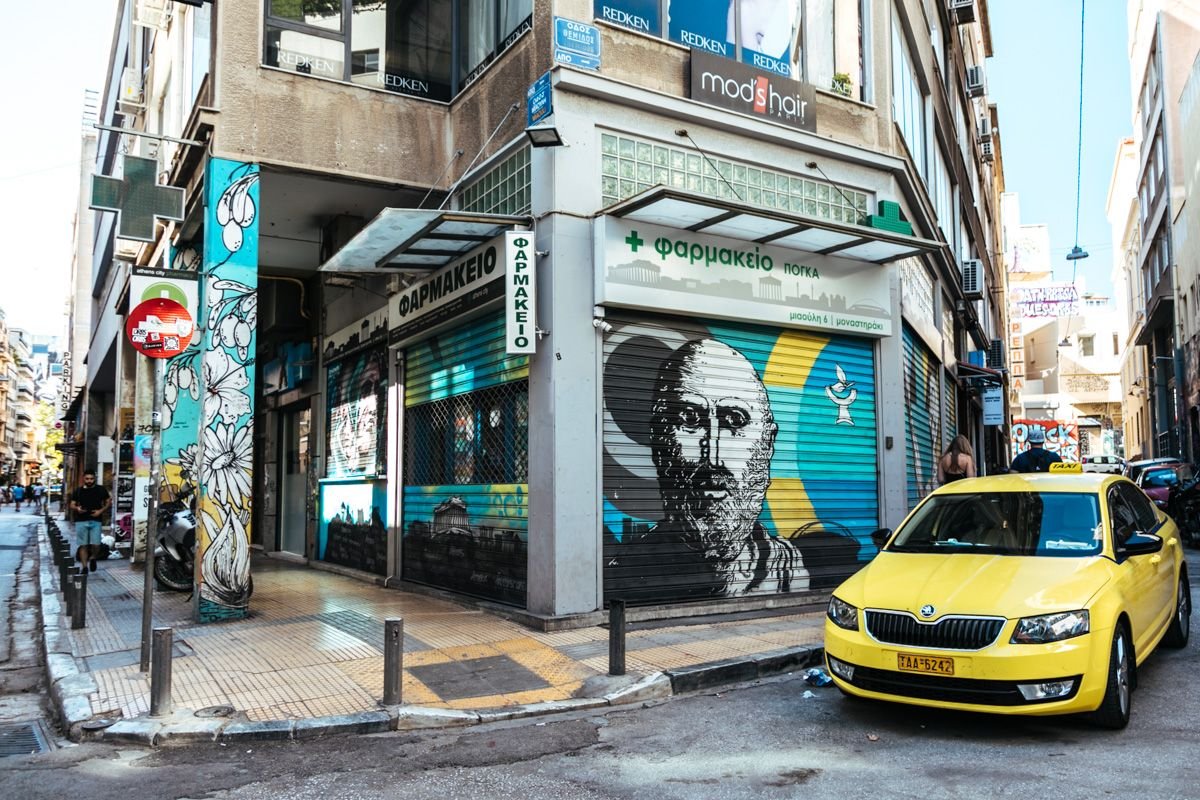 The Costs of Living in Greece

Athens, and Greece in general is a really affordable place to live. It is actually estimated that the cost of living in Athens is 30% lower than that of most European countries. Sadly, a lot of that is due to the Greek economic crisis – the country is still in recovery.

The average salary in Greece ranges from between €500-700 a month. Cost of living reflects this. You can find a studio apartment in Athens for around €200-€250 a month.

Apartment rentals in Athens have increased in price over the last few years thanks to the impacts of Airbnb. They are still much more affordable than other European capitals though. You can expect to pay between €450 and €750 a month for a one or two bedroom apartment in Athens depending on the specific location.

Economically speaking, there are a lot of benefits to living in Athens for me. Since I essentially earn a respectable UK/US salary, I make several times more than the average Greek salary. I can live here quite comfortably, live alone, travel frequently, and eat out regularly, and still have a good amount of disposable income. I can have a much better standard of living in Greece than I would in the UK where things are remarkably more expensive.

Sign up to be notified when my online course launches!

Tags: guest postquit your job to travel
Previous ArticleEssential Hiking Gear for Beginners: 5 Items You Absolutely Need For Your First Hike
Next Article The Best Multi-Day Hiking Trips in Canada