Behold, the first-ever guest post on Frugal Frolicker! I prefer to keep this blog a space to document my own adventures, but my flatmate/travel buddy/business partner Anna has some incredible travel stories just begging to be shared. So I’m giving her this platform to dazzle you with some of her finest Tinder travel moments! 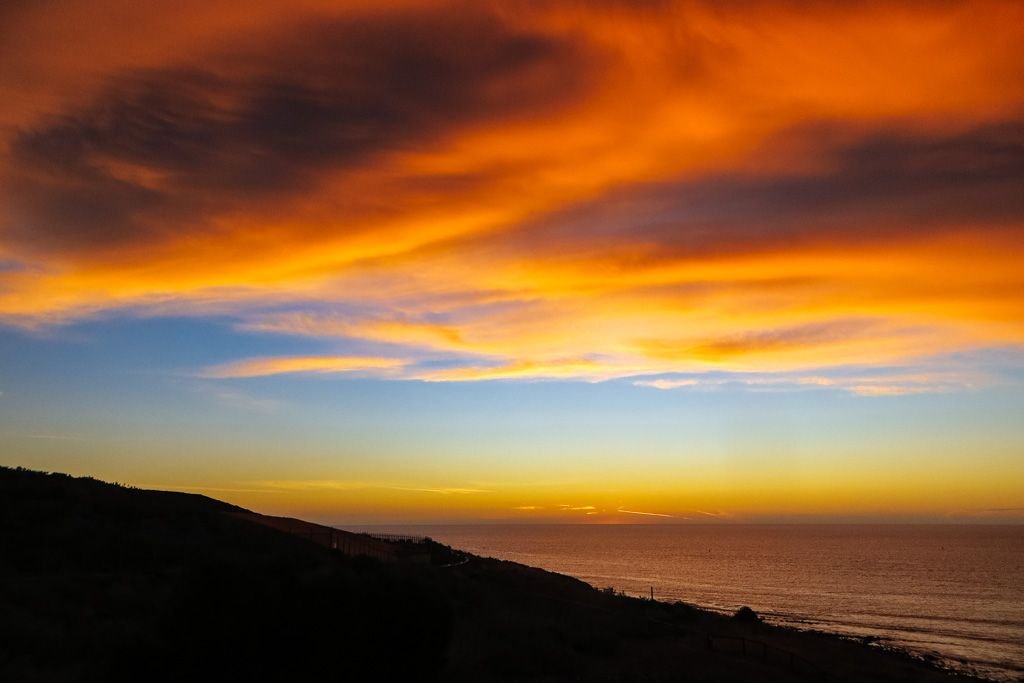 Tonight I turned down a Tinder date in Sydney with a 21-year-old Hollister model in order to write this blog (one of his profile photos was a non-ironic ‘Blue Steel’, so no big loss). I’m a 31-year-old Brit and I’ve travelled around Australia a fair bit in the last year while on my Working Holiday visa. I’ve had the luxury of a lot of time while traveling – I was meant to be doing farm work for my 2nd year visa but repeatedly got sucked into a vortex of hedonism and adventures, thanks to this thing called Tinder!

As Lindsay previously blogged about, Tinder is great for traveling. I’ve been on some fantastic adventures with really interesting people I met on Tinder, while gaining insights into the best local spots I’d never have known about otherwise. Boat trips, roadtrips, motorbikes, sunsets, and hot springs in the Northern Territory; fishing, koalas, and waterfalls in Queensland; wine tasting, crazy hill drives, and sunsets in Adelaide – just to name a handful.

The Racing Driver in the Northern Territory 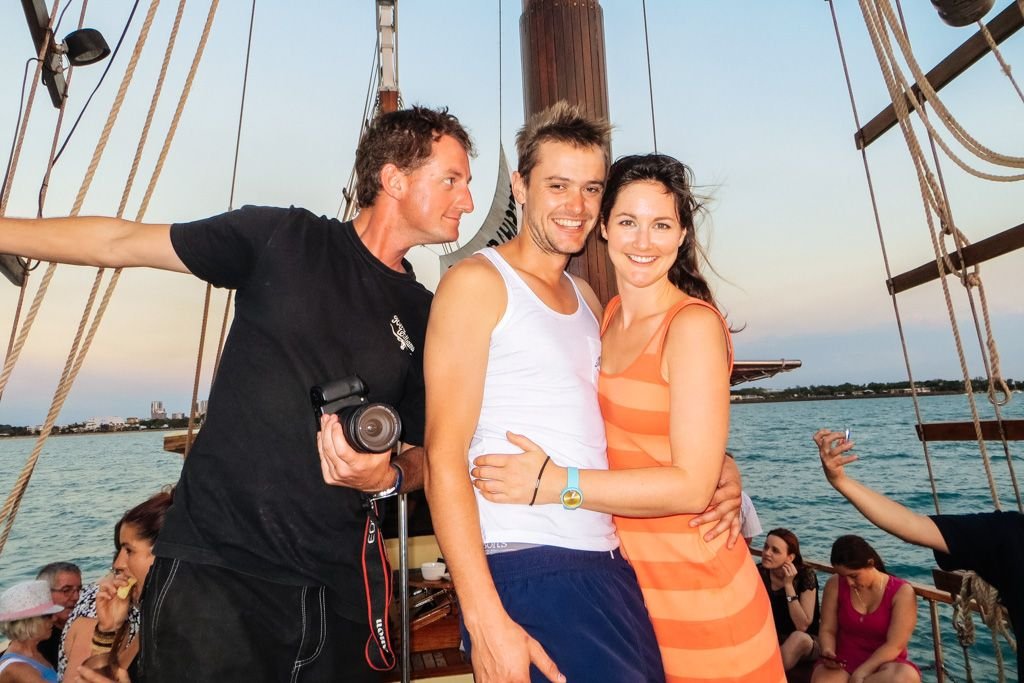 While I was in Darwin I wanted to find someone to see the sights with, so I agreed to meet a guy who was a racing driver in the local country show (he raced V8 utes professionally!). The first time we met I was actually staying with the grandparents of another guy I’d dated from Tinder when I was in Melbourne. I timed it badly and he knocked on the door while I was in the shower. I came out in a panic hoping he hadn’t told them that we’d never met in person before, but thankfully I found him chatting them up in the living room under the premise that we were already friends. Whew!

So off we went on his motorbike – I awkwardly hoisted up my dress, jumped on, and we sped off to go swimming at the local wave pool. From there we went to the Mindil Beach Sunset Market to catch the famed sunset. We ended up getting along so well that the date kicked off a couple weeks straight of nonstop adventuring! Particularly memorable times with him include climbing a 10-foot barbed wire fence in the dark, sleeping in a caravan and being woken by announcements for a horse show at 7am after two hours of sleep, plane spotting at Darwin Airport as planes took off and landed, driving through the Outback in a V8 ute at 240km per hour, being kept awake by possums on the roof of our hotel room, drinking with aboriginals in the middle of nowhere, and commandeering a digger. 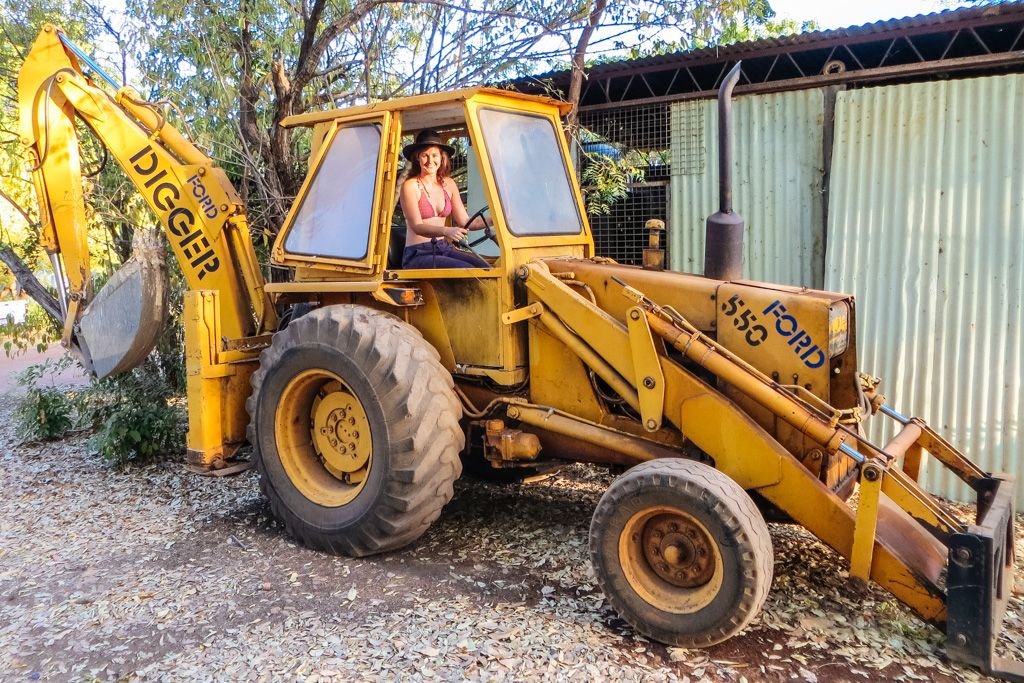 We were halfway through a roadtrip from Darwin to Brisbane when I got an email about a visa job (I was running out of time to get my 3 months of farm work done in order to qualify for my second year Down Under), so we parted ways and agreed to meet up again sometime. I was a bit shell shocked to be left on my own on a cattle ranch in the middle of nowhere and surprised to find that I really missed him!

The Italian Chef & The Horse Racer in Queensland

In Queensland I matched with a cute Italian chef. We met for a drink and I ended up staying with him for at least a week. Not surprisingly, he was always cooking for me and bringing home desserts and bottles of wine to share. When we weren’t being all domesticated, we were busy galavanting around Queensland visiting animal sanctuaries and waterfalls and finding random cool stuff like an abandoned holiday resort in the middle of the bush. The best was how, on my birthday, he gifted me with a red rose and a voucher for a full body massage! 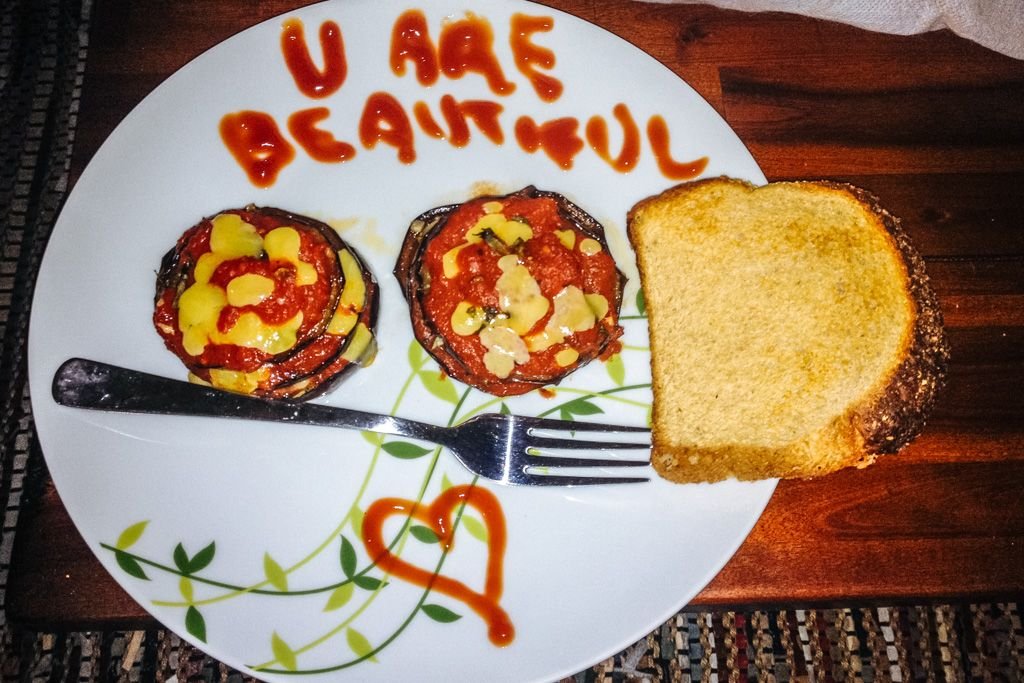 Things got a little too hot and heavy when he basically told me I was welcome to come back someday and have his babies (ok, so that may not have been exactly what he said – but that’s the gist of it). At that point, I hopped right back on Tinder and found myself a new main squeeze. I quite literally fled from the Italian Chef’s house and made a fast getaway in The Horse Racer’s car (unfortunately he didn’t pick me up on horseback, but how cool would that have been?!).

True to his nickname, this lovely guy was obsessed with horse racing and had his own horse. During our time together, he took me to a private beach which I’d never otherwise have known about – you can only access it in a 4 wheel drive vehicle via a long bumpy track. Another day, we went barra fishing and I almost caught a fish – that’s totally worth bragging rights, yeah? Running over a possum while attempting to drive his massive 4WD car, maybe not so much. I quite enjoyed hanging out with the Horse Racer because I really got a sense of what it was like to live in this Queensland town, and I learned a bit about horse racing in the process! 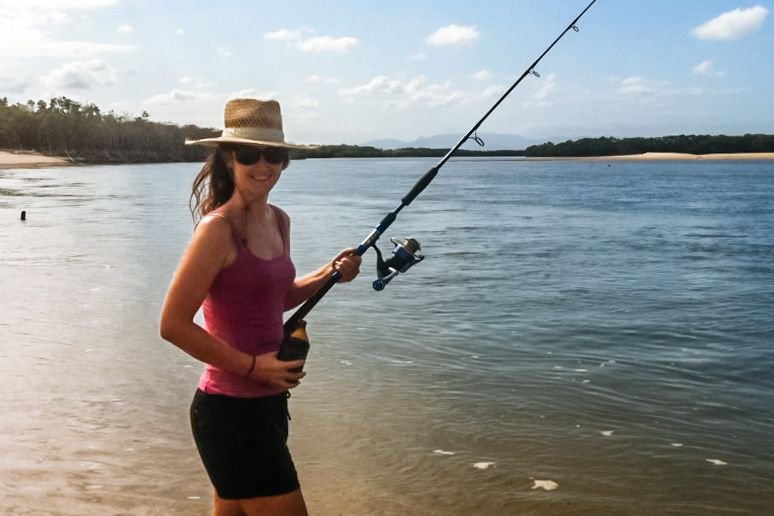 The Racing Driver (Again!) & the Photographer in Adelaide

I went to Adelaide a few months after the Northern Territory to stay with the aforementioned Racing Driver. Things got off to a rough start when I arrived at the airport and didn’t find him waiting to pick me up as he’d promised. Turns out he’d gotten the day wrong and turned up late, drunk, bearded, and barefoot with his friend to pick me up. We stopped at a bottle shop and began the first of several days of endless drinking. I went on lots of adventures around Adelaide with him and his friends including a ‘whispering wall’ dam where you can stand at one end and can hear someone whispering at the other end 100m away. We also went to wineries, visited their friends in the hills, almost ran over a koala, and drove around winding hilltops with no brakes at 100km per hour (what you get for hanging out with boy racers). Sure, I probably saw a bit more of Lonsdale industrial estate than your average tourist, but I also got to ride a unicycle (or more accurately: *attempted* to ride) and visit Victor Harbour and Penguin Island in a 1950’s car. Sadly it wasn’t quite the same as it’d been when we were hanging out around Darwin and things ended up getting awkward due to complications with his friend, so I decided to part ways with him earlier than planned. 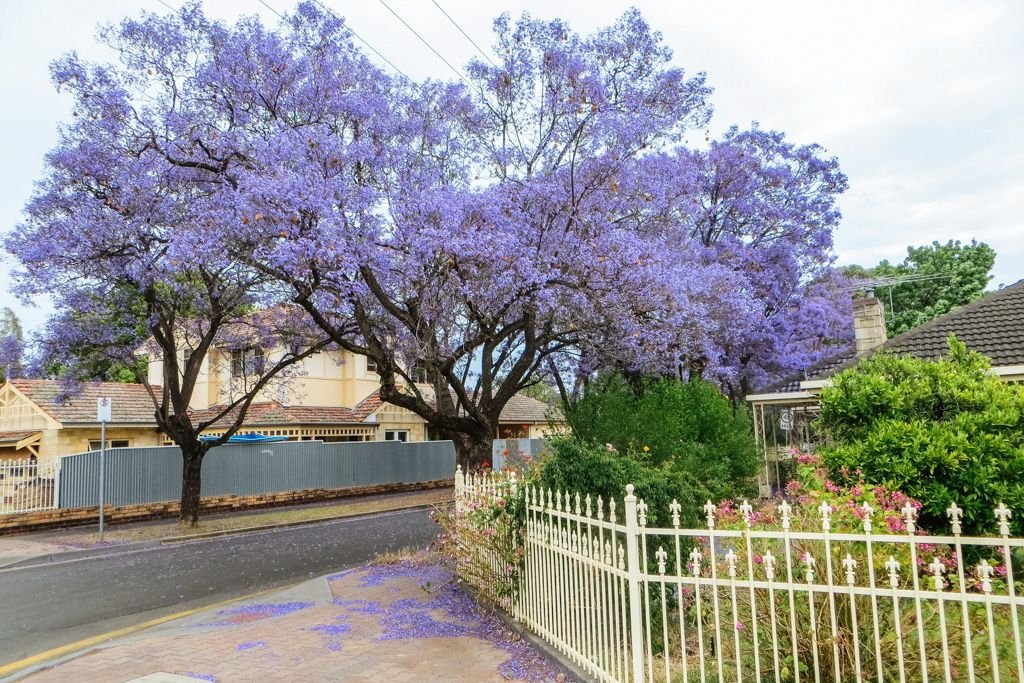 Luckily I was soon rescued by another Tinder guy, a photographer and sailing enthusiast I’d met while in Queensland a few weeks prior, who happened to be home in Adelaide visiting his parents. He invited me to stay with him and his parents near the beach in Glenelg for a week. I’d gotten ill from overdoing it with one too many late nights out and his mum sent him up to my room with a tray of lemon tea, honey, and sore throat remedies! It was too sweet. His family also cooked for me and were generally very lovely and hospitable. Once I recovered, the Photographer took me on some wine tours – he even rang some of the cellar doors ahead and they greeted us when we arrived! He also brought me to some great view points and random local spots he knew from growing up and told some great stories that really added a special sentimental dimension to my time there. 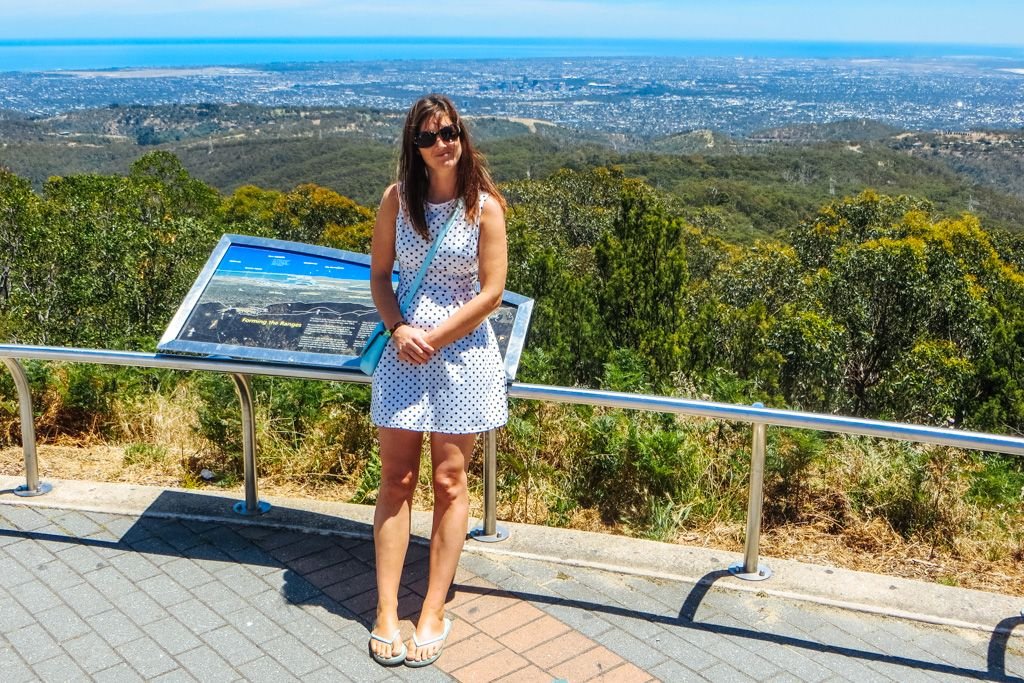 All of this depends on what you’re looking for. If I had wanted to get seriously involved with someone, I may have done that. But I was never looking for anything other than life, fun, and meaningful connections. Tinder guys often ask what I’m ‘looking for’ and I say I don’t know until I find it. Just be open to new experiences with few expectations and you’ll have a great time!

Have you gone on any Tinder adventures while traveling? I’d love to hear about them in the comments below!

Note: Names have been left out to protect the non-innocent ;)