“Three bars! Three bars!” I whooped with glee as we approached Esperance, the first proper town we’d drive through in nearly three days. Alex grabbed his iPhone and feverishly checked messages while maintaining control of the steering wheel in his other hand. I quickly replied to a few stale emails while the Optus gods were still on our side.

After stopping at the Woolies in town to stock up on veggies and peanut butter (me) and Coronas (him), we plotted our next move. “Maybe we make some lunch on the Esplanade” Alex suggested, more a statement than a question as he turned the car left toward the waterfront. My heart sank. If we drove just a half hour more, we’d make it in time for sunset at Cape Le Grand National Park, where the creme de la creme of Australian beaches would be waiting for us. It was the #1 thing I’d wanted to see on this 9 day road trip from Melbourne to Perth, and I felt it slipping away as I surrendered to the German who’d driven my ass 3500 km across the country. All the poor guy wanted was to be relieved of driving for the day, to sit on the waterfront with his guitar and a beer. How could I deprive him of this joy?

I held my tongue, flashing back to a past road trip where I’d been accused of “deciding everything” – a travel experience that left me partially wounded. I’d been so careful not to call all the shots or attempt to control our route too much on this adventure. But dammit, I’m really good at finding cool shit to see and do when I travel – and I get really excited about these things sometimes, to the point where to NOT experience them just isn’t an option in my mind – ESPECIALLY if my gut instinct is telling me to go there.

For 8 days, my gut had been leading me to this spot. Cape Le Grand was like my promised land, and here it was within eyesight across the bay, dangling in front of me like a toy I couldn’t quite catch. Should I pounce, or should I surrender?

“… or do you think we should just go to the park now?” Alex pondered, as we drove toward the industrial esplanade. I took a deep breath and said yes. “I mean, if we’re going there anyway, we might as well just go now…”. I let my statement dangle in the air for a few seconds, hoping it wouldn’t be construed as me being too domineering. He promptly made a U-turn and we headed east toward the park in silence. 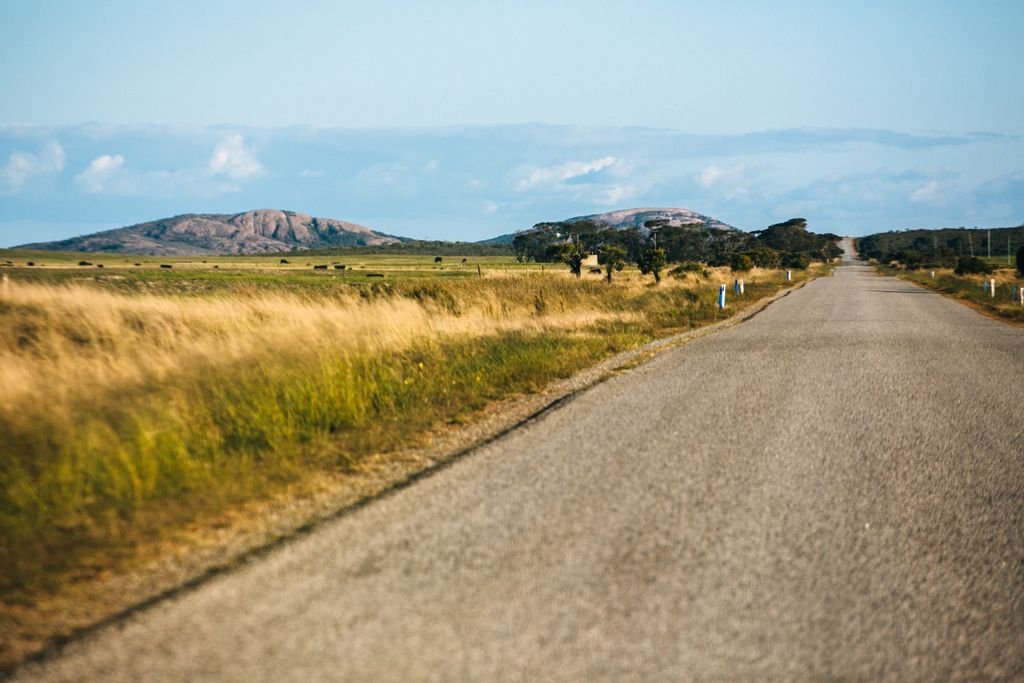 We turned onto the road leading into Cape Le Grand National Park and Teo the Van shuttled us past modest mountains and open fields flooded in golden light. I felt my excitement brimming but sensed the tension in Alex beside me. It would be worth the detour, I resolved – he’ll see soon enough what I’ve been waxing poetic about for the past several days and be glad I coaxed him into taking us to this magical place. Surely the photos of kangaroos lounging on beautiful white sand beaches wouldn’t have mislead us.

We soon pulled up to the park entrance booth, which appeared closed but had no shortage of signs mentioning park passes and camping fees and something about self-registration. Alex hopped out to investigate. “You have to pay?” he inquired of the folks in the car in front of us. They affirmed his query while depositing payment in the dropbox. Alex walked back to the car behind us, containing the other duo we were traveling with. They conferred in German. We hadn’t paid for a single thing other than food, drink, and petrol all trip – I knew they wouldn’t be keen to pony up and pay to enter the park, much less to camp there. I frantically grasped for possible arguments I could throw at them, should they want to turn around and leave. Hell, if I had to pay for all 4 of us to enter and camp in this park, I probably would.

Alex got back into the car and we drove straight into the park. I shushed my law-abiding instincts and figured we’d just play ignorant tourists if a ranger caught us without a park pass.

But no matter what, we were here! I was finally going to see the mythical Lucky Bay! 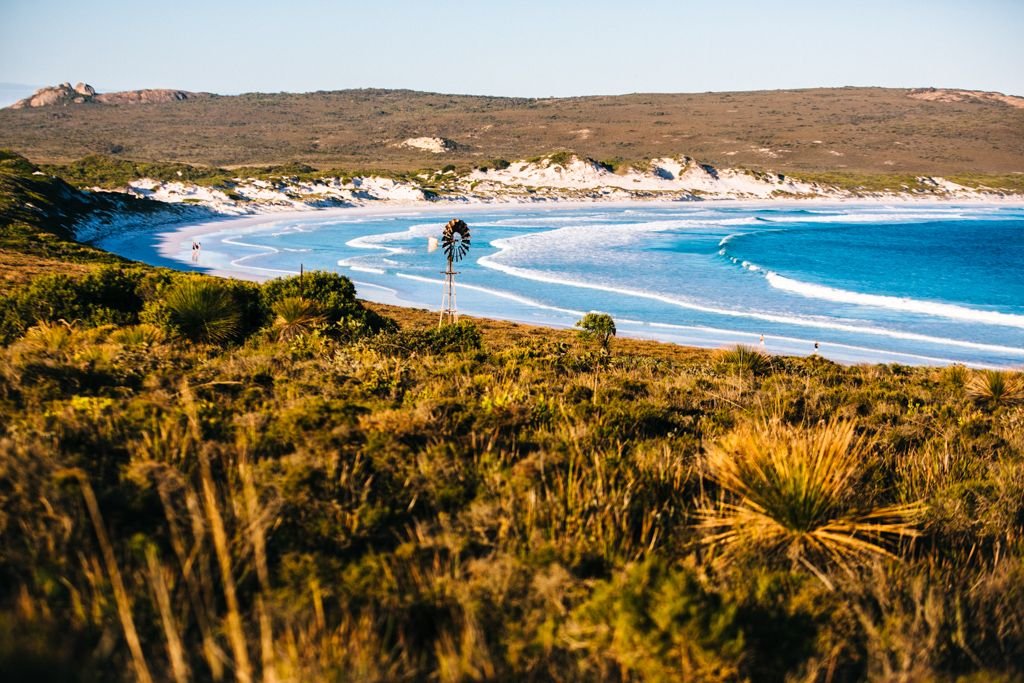 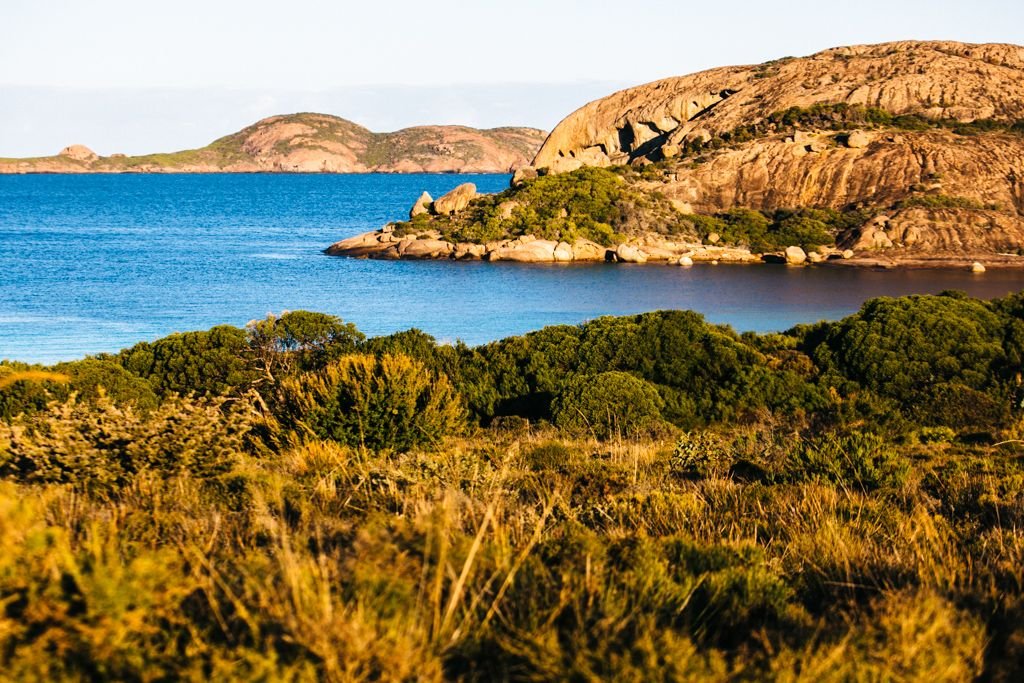 I gently guided Alex toward signs for Lucky Bay and in no time we started peeking glimpses of the park’s beaches from the road above. “Whoaaaaaaaa”, he muttered in awe, sticking his iPhone out the window to take a video clip. It was at this point I knew I had won him over – that we were ok, and that he no longer regretted this extended drive to get here.

We slowed to a crawl at the top of the hill leading down to Lucky Bay, admiring the beach and surrounding mountains from the lookout point. The beach looked so damn beautiful in the golden hour glow that I couldn’t imagine it appearing any more stunning.

… and then the sun started to set. I threw off my shoes and set off down the beach with my camera to chase it. 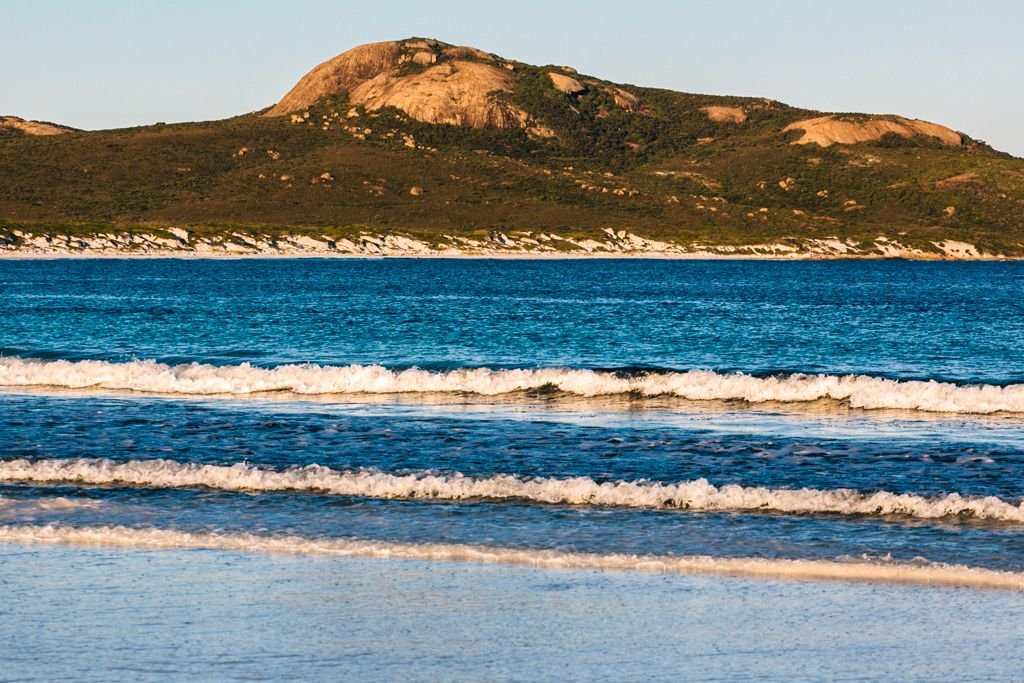 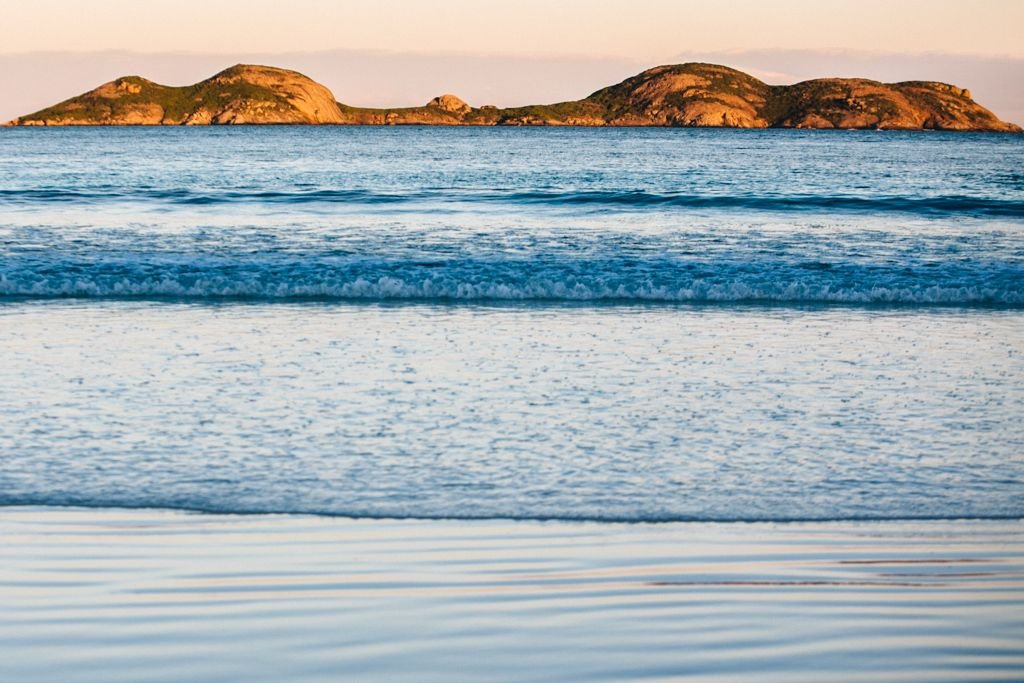 I allowed myself to get distracted by the smooth white sand that squeaked beneath my toes – and how the tide would come in and erase all remnants of my footprints no matter how deep or messy I made them, and replace them with gentle ripples. 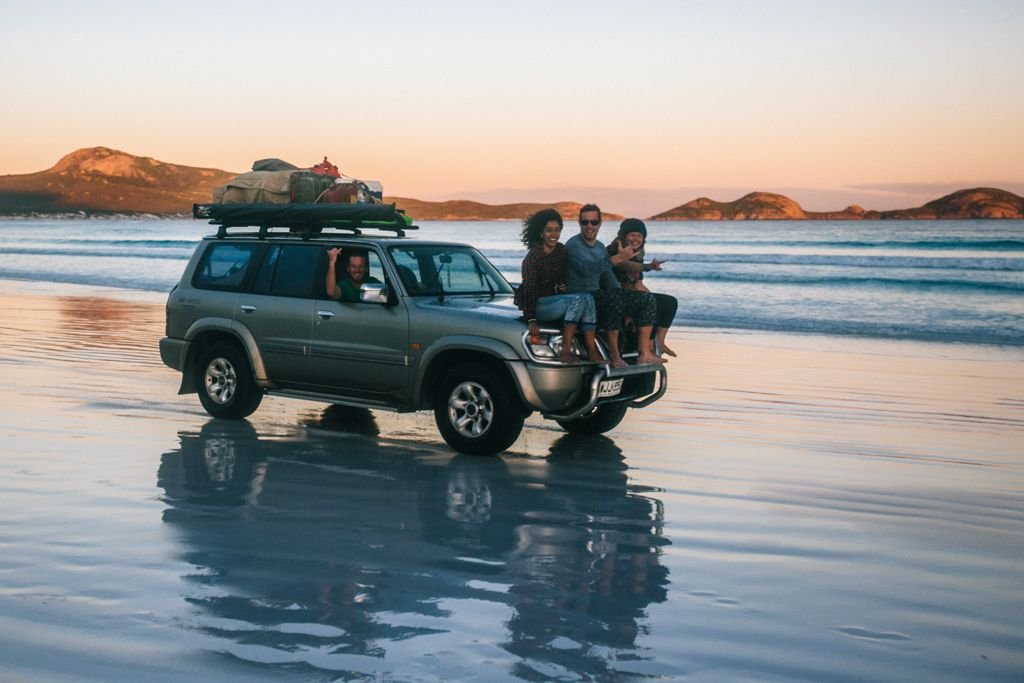 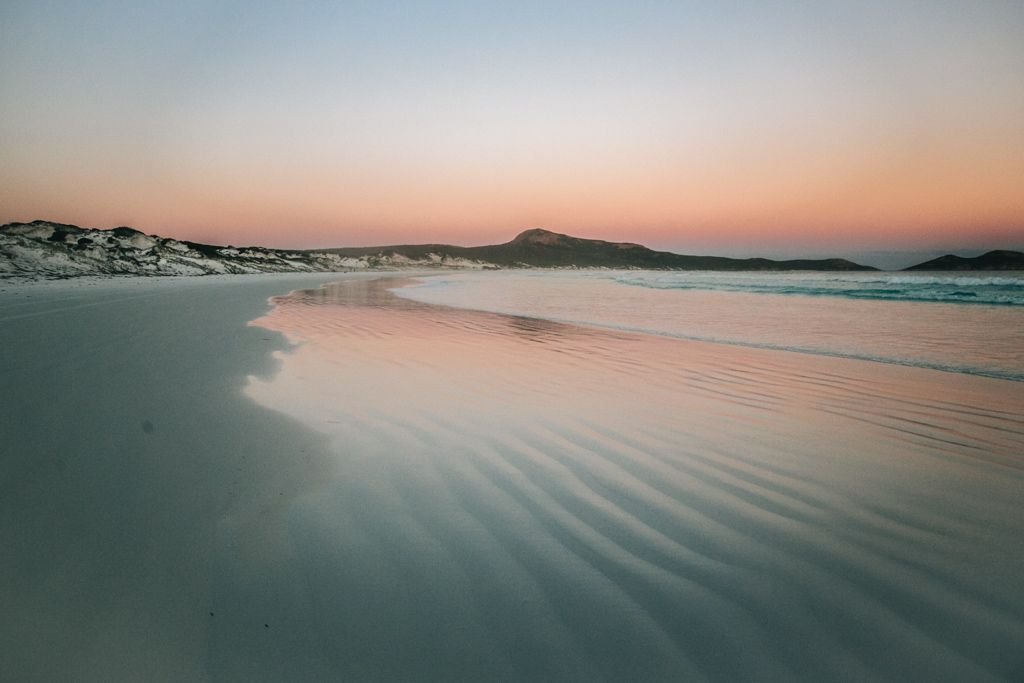 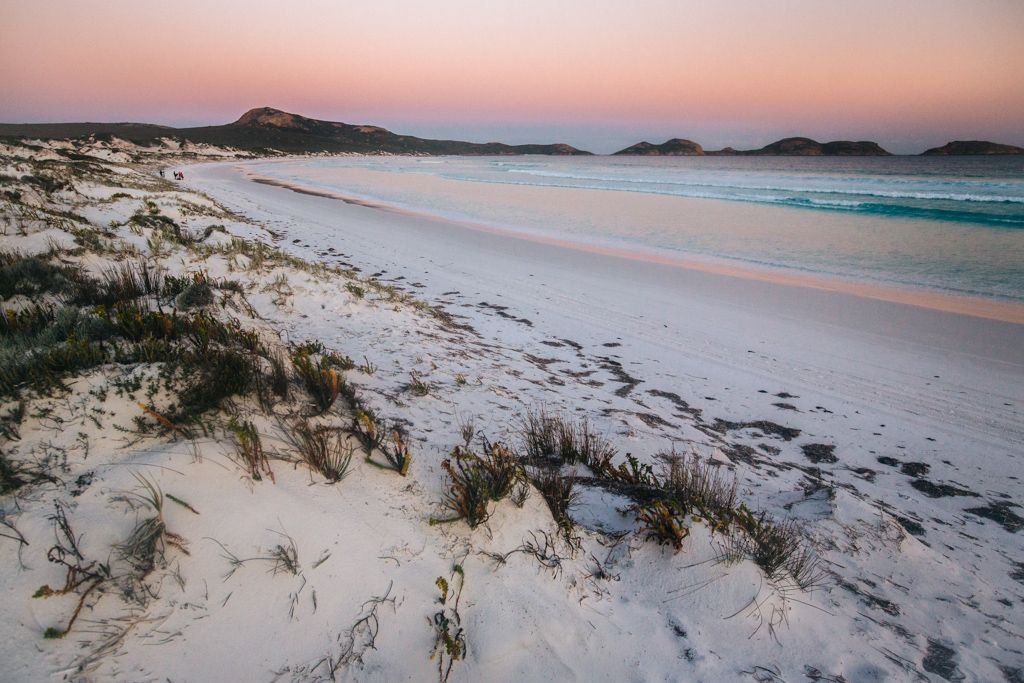 I walked toward the sun, absorbing the subtle pastel colors that began to paint the sky, capturing their progression every other minute with the snap snap of my camera. I climbed onto the dunes and watched the sun disappear over the horizon, coloring the sky above the other side of the beach with an entirely different palette. It was as good of a grand finale as I could have fashioned in my mind. I then met up with Alex on the beach, who had a guitar in one hand and a six-pack in the other, and we strolled back to our campsite in stellar spirits. 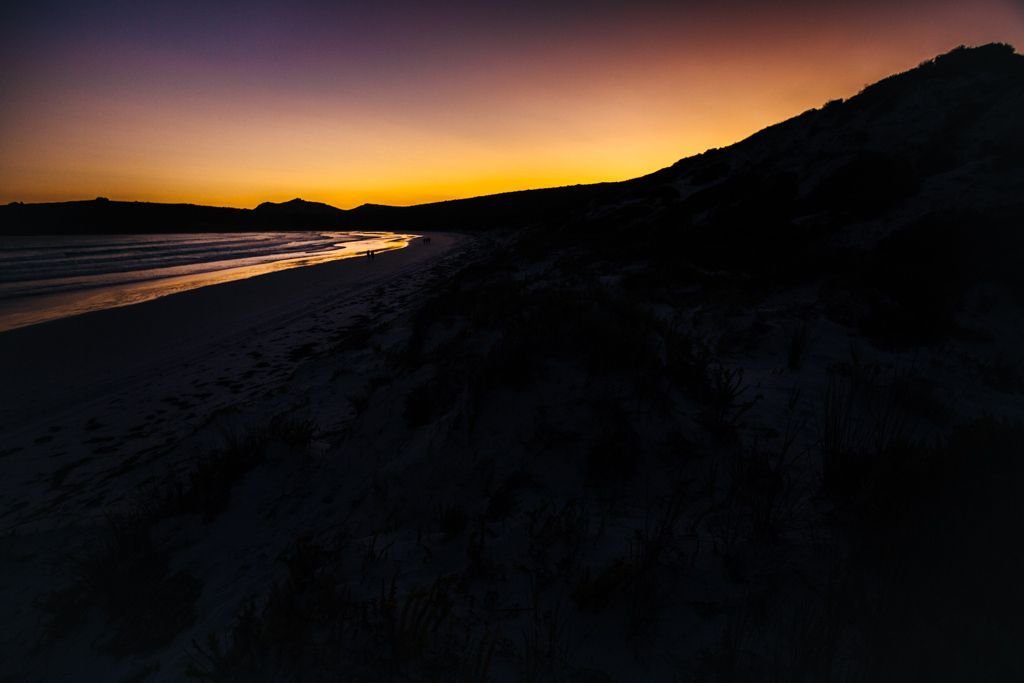 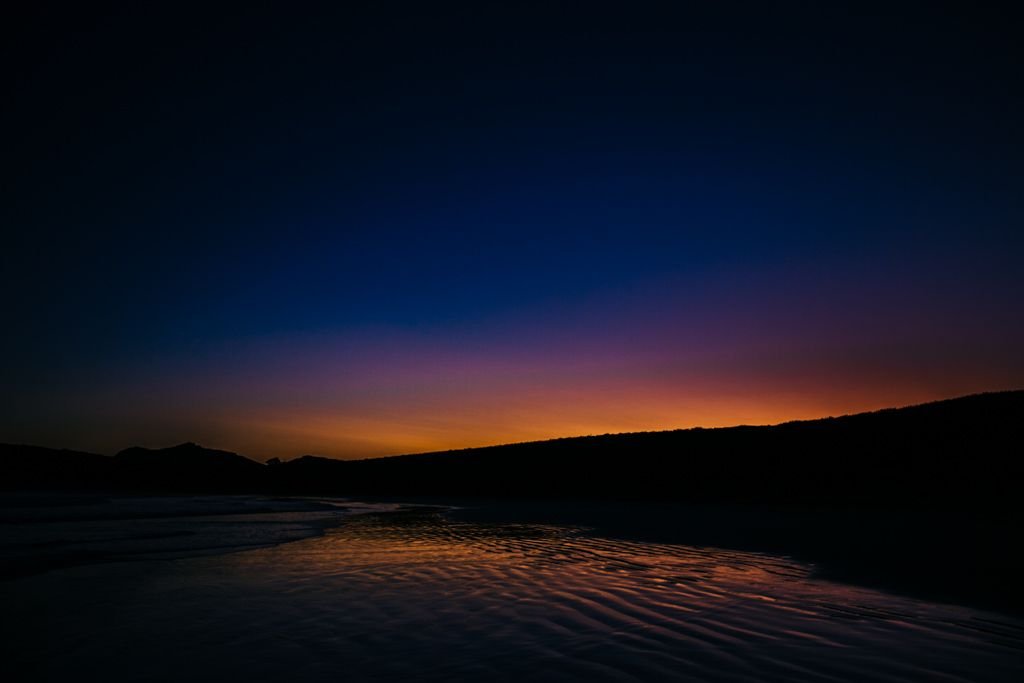 After a lovely evening watching the stars, listening to the Germans jam, and then falling asleep to the sound of the waves, I rose at sunrise and scurried off to the beach. There wasn’t much action happening around the sun, but on the other side of the beach I noticed some dark clouds hovering over the bay. I took off walking down the beach just as I did the night before, enjoying it despite the sunrise being a bust. 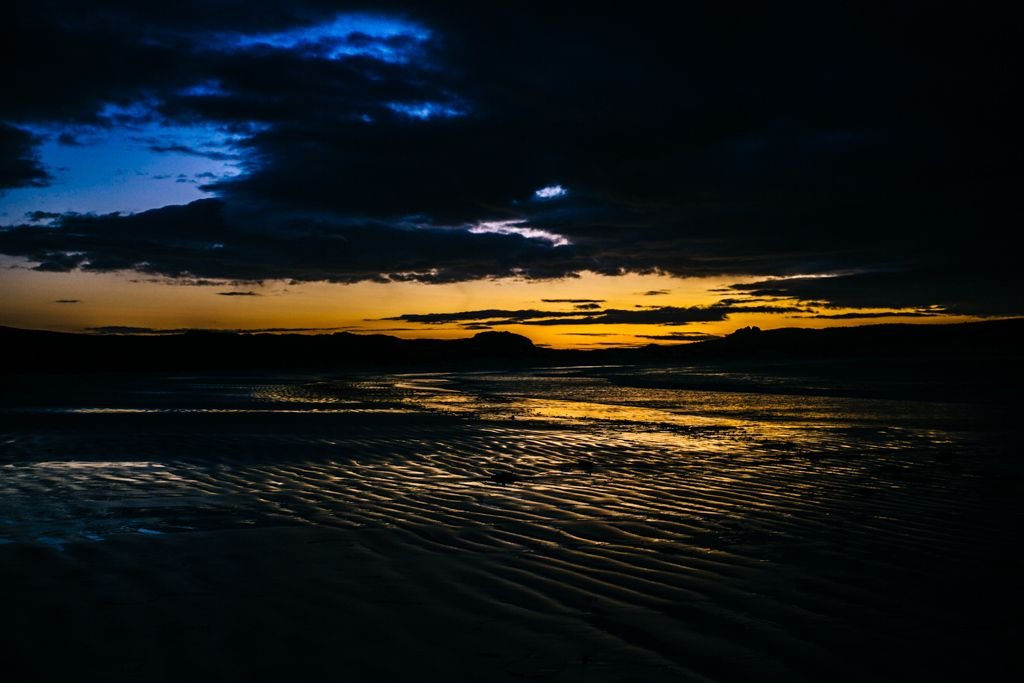 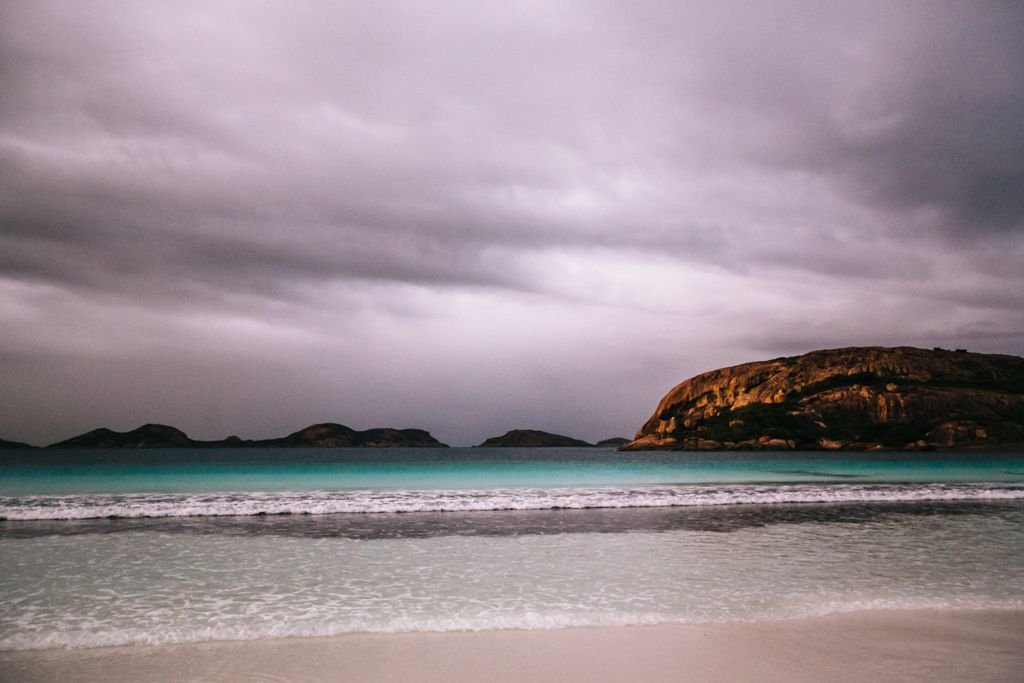 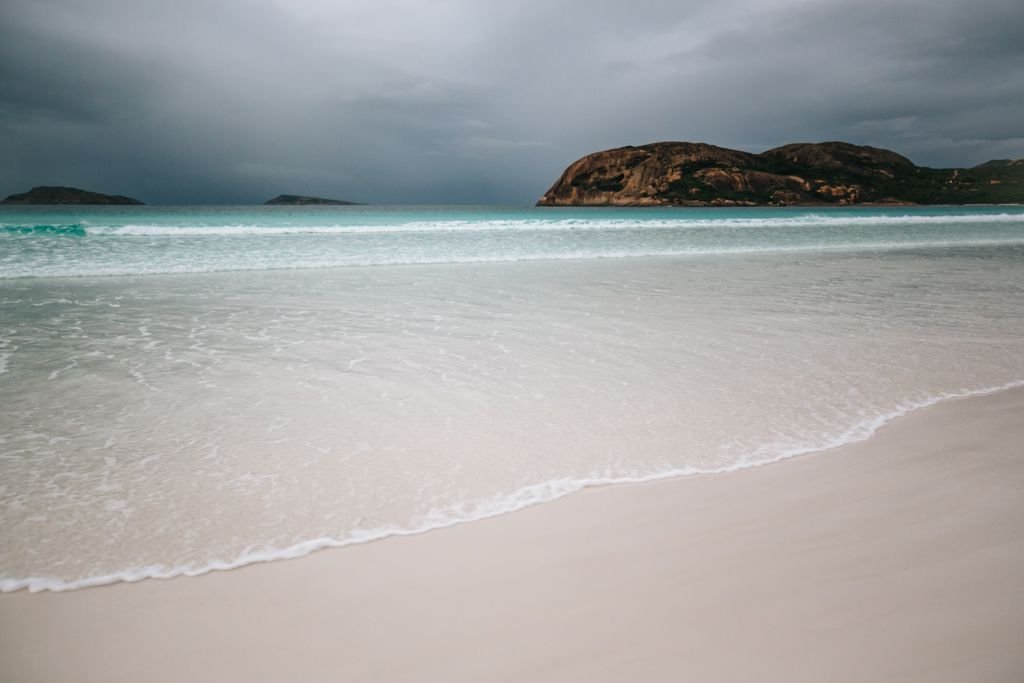 And then within 10 minutes, the sky erupted and turned a fiery orange behind the dunes. I ran toward it, jaw dropped and camera raised. How does this happen?! How can the sky go from nothing to everything just like that? Magic, I tell you. 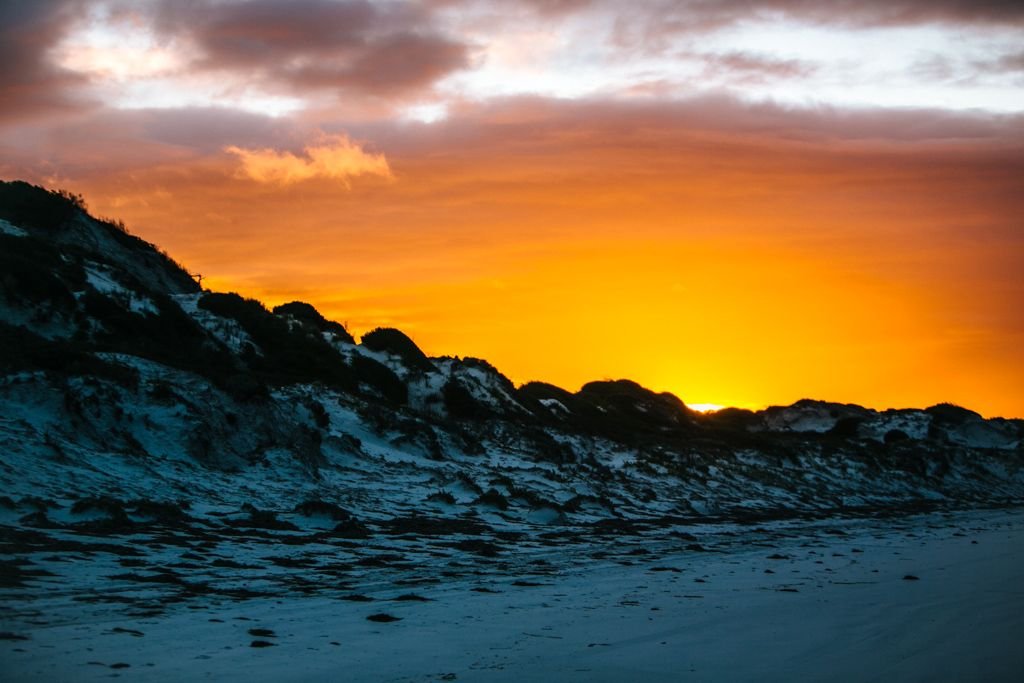 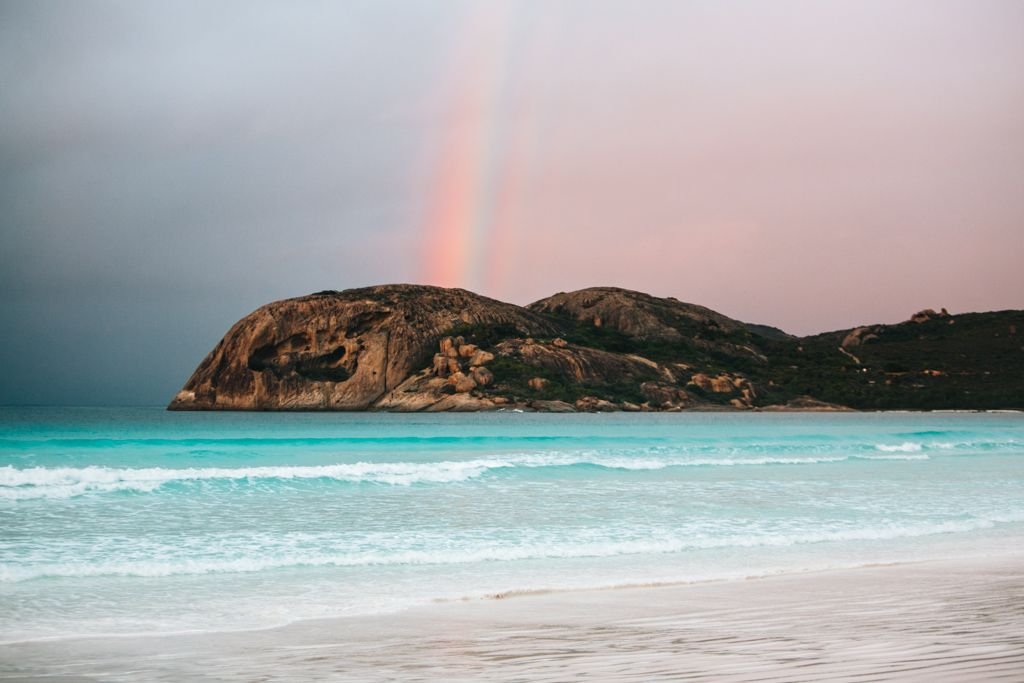 As if that weren’t enough, I turned back to look at the storm clouds, only to find a massive rainbow shooting straight up from one of the mountains. WHAAAAAAAT! I couldn’t believe how much color I was seeing. I planted myself where I was in the dunes, head darting from the fiery sunrise to my left, to the massive rainbow to my right. Back and forth, back and forth, in complete bafflement and awe of nature. It was just a few minutes of glory before the rain started to fall and wash out the colors in the sky, but that was all I needed to start the last day of our roadtrip on a massive high. 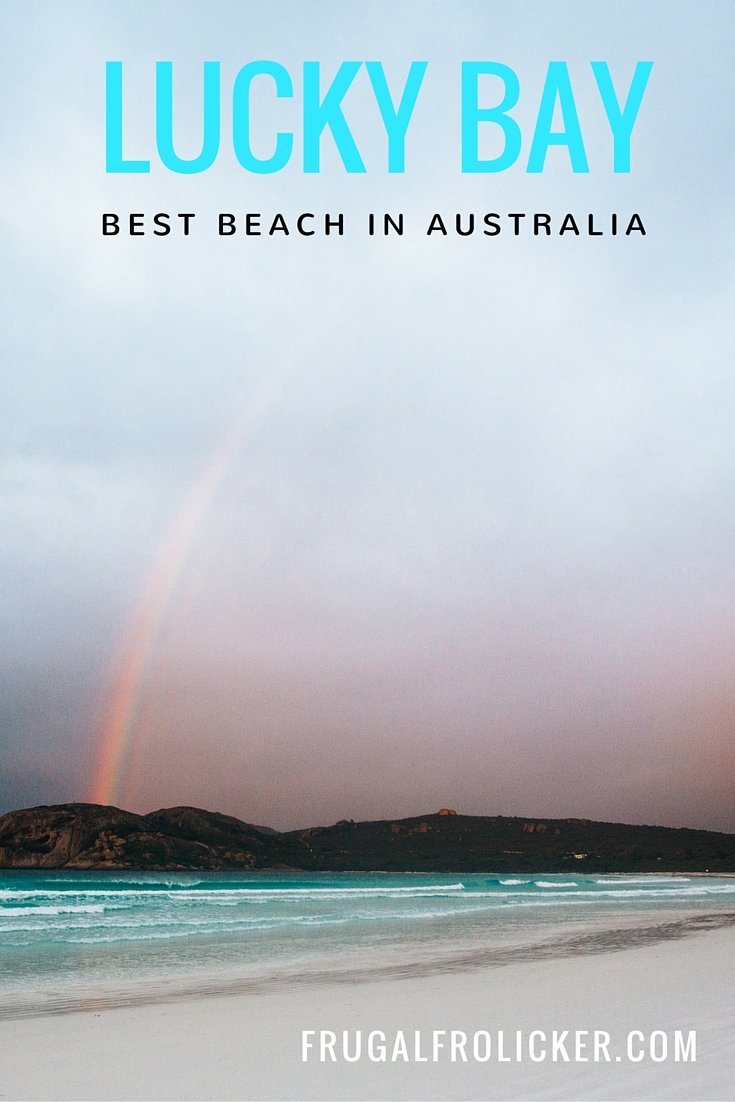 Tags: AustraliabeachCape Le Grand National ParkLucky BayrainbowSouthwest AustraliasunrisesunsetWestern Australia
Previous ArticleIn Which I Reveal All My Travel Photography Secrets
Next Article On Being Homeless and Planless