I was on the fence about including Chiang Mai on my 2013 Asia trip itinerary, but when someone I know insisted on hooking me up with a family friend from there, my decision was made. Never pass up an opportunity to experience a new place with a local!

On my second day in Chiang Mai, Khai (the aforementioned local) picked me up from my hostel and whisked me around on her cute little motorbike. This is a town where EVERYONE has a motorbike, which makes sense considering the lack of public transport and how spread out things are outside of the town center.

And so began 2 days of local living in Chiang Mai! 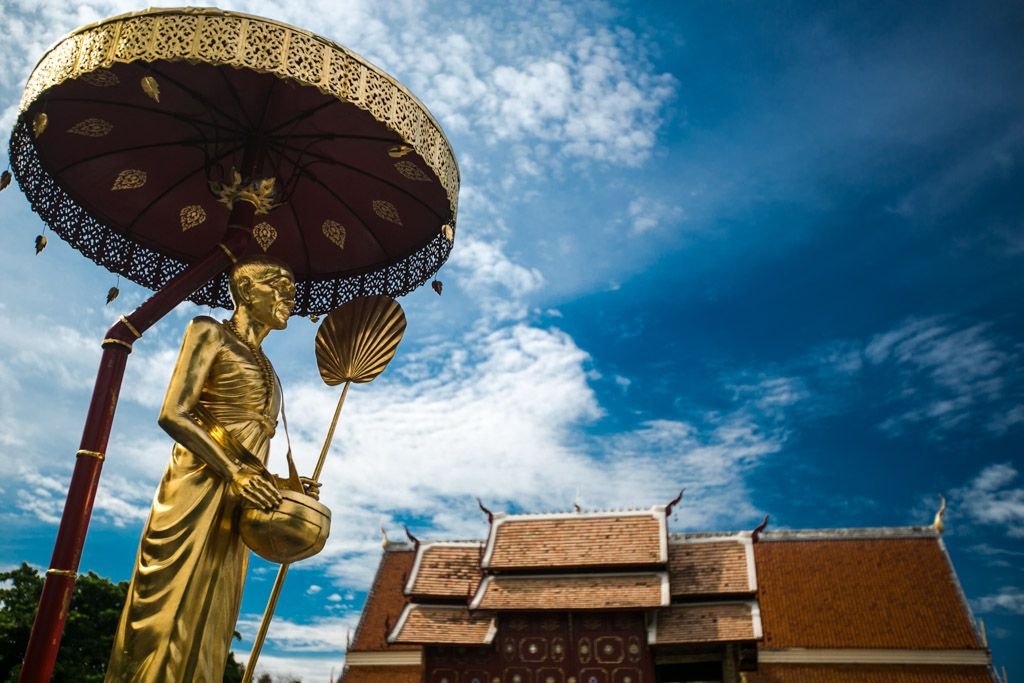 Khai took me to meet her friends for dinner at a local restaurant right outside the moat. This wasn’t your typical tourist haunt or roadside eatery. No one takes your order. Instead, you step up to a buffet of raw meat, herbs, and greens, fill little trays with your items of choice, and bring them back to your table to grill yourselves.

“This is what Thai people really eat”, she told me. “We NEVER eat Pad Thai!”. Oops? 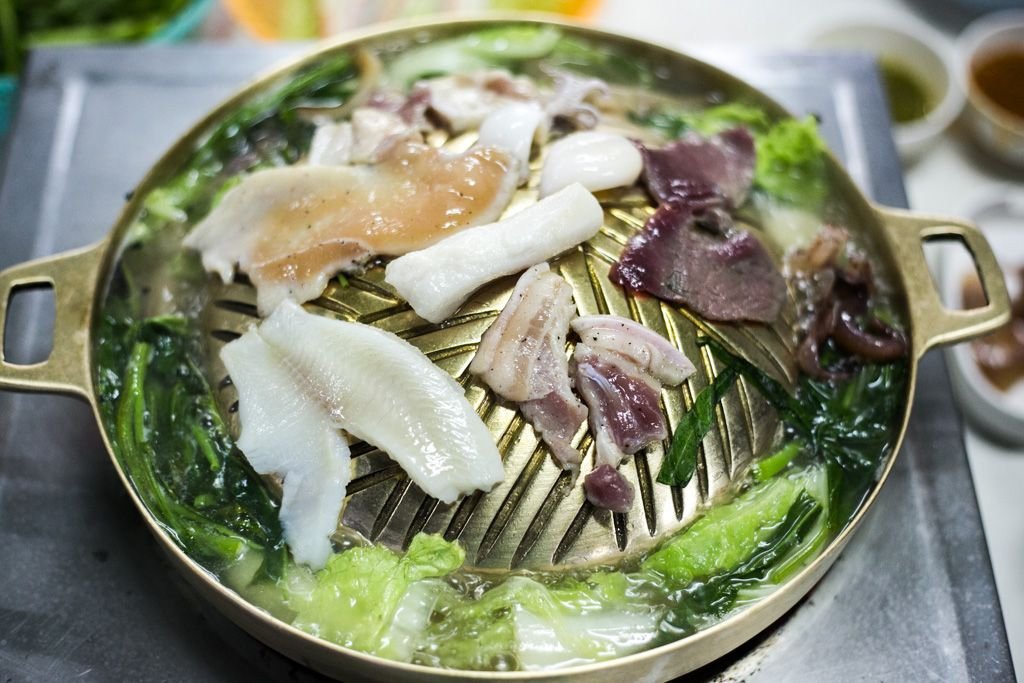 I didn’t know what most of the meat was (except for the fish and chicken), but I ate everything and it was DELICIOUS. And rest assured, veg friends – they’ve also got tofu to grill!

The pièce de résistance in Khai’s plans for me was a night out at her favorite club, Warm-Up, where she often goes with her friends from high school. When I saw it listed in my Rough Guide’s ‘Bars’ section, I knew I would be completely out of my element based on its description: “Typical Thai club where girls in dangerously short skirts dance around their handbags to pulsating techno beats”. OH BOY.

We headed straight there after our BBQ dinner to get there early enough to snag a table. 8pm is absurdly early to show up to a club in NYC, but this was Thailand so I rolled with it. For the record, I opted out of the short skirt dress code (not very motorbike-friendly, is it?) and wore a maxi dress with no makeup – ‘cause that’s how jaded backpackers roll.

Warm-Up is like 2 venues in one. The front room is open-air, has comfy seating and a bar where you can hang out, and often has musicians playing acoustic sets. We walked through and I thought okay, this isn’t so bad – I can handle this! There were plenty of other tourists there as well. 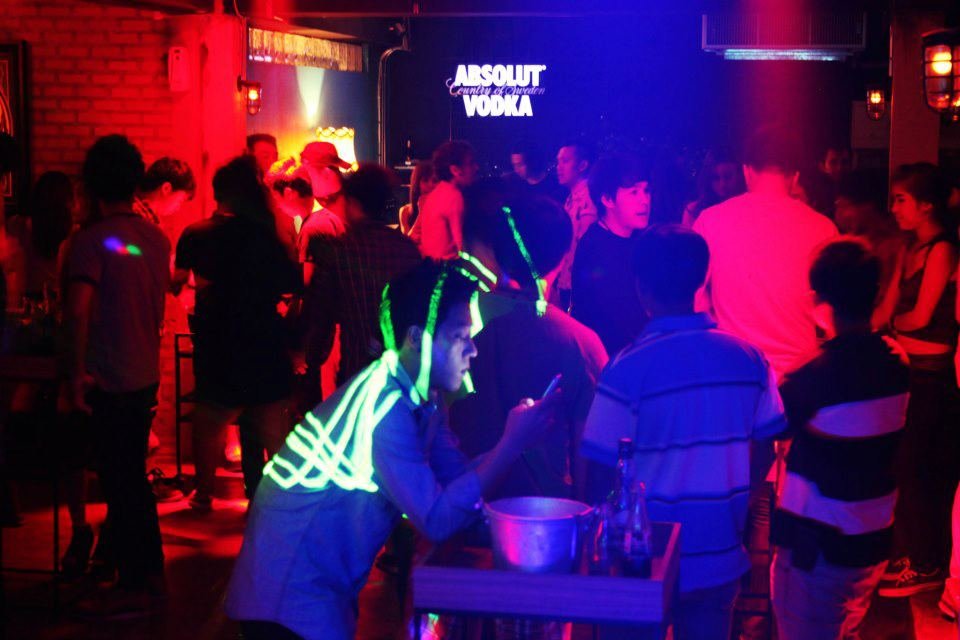 But we kept on walking to the back, where we entered a darker room that was already packed with people – mostly locals. All of the tables were already taken by small groups of Thais just standing around sipping their drinks. It was the most low-key club imaginable. Khai and I grabbed a space in the corner, just by the bar, and ordered drinks. I gawked at the American-priced glasses of wine and instead, we ordered something more typical of local club-goers. Each table around the room seemed to have a big bucket of ice, a bottle of liquor, and some sort of mixer, all to be shared amongst a group of friends. We followed suit with a bottle of vodka and some club soda and waited for Khai’s friends to show up.

An hour later, I found myself in a sea of Thais subtly bopping around their tables to what I assumed was a local boyband on stage, smushed up in a corner with 2 Brazilian brothers (Khai’s friends) who felt about as out of place there as I did. It was too loud to converse, so we just hung out awkwardly, eagerly awaiting Khai’s return (she’d gone home to get ready, aka put on her “dangerously short skirt”). The second she came back, we all pretty much left the venue; thankfully Khai was with other friends by this point, so we weren’t abandoning her.

One obscenely-priced tuk tuk ride across town and I was back at my hostel. Whew, I survived a Thai club!

Cliff Jumping at the Quarry

The next day, Khai took me to lunch with the Brazilian brothers. From there, we spontaneously decided to ride up to a lake just outside of town. The idea of a lake somewhat underwhelmed me, but I was eager to wash away my clubbing experience with something a little more my speed. 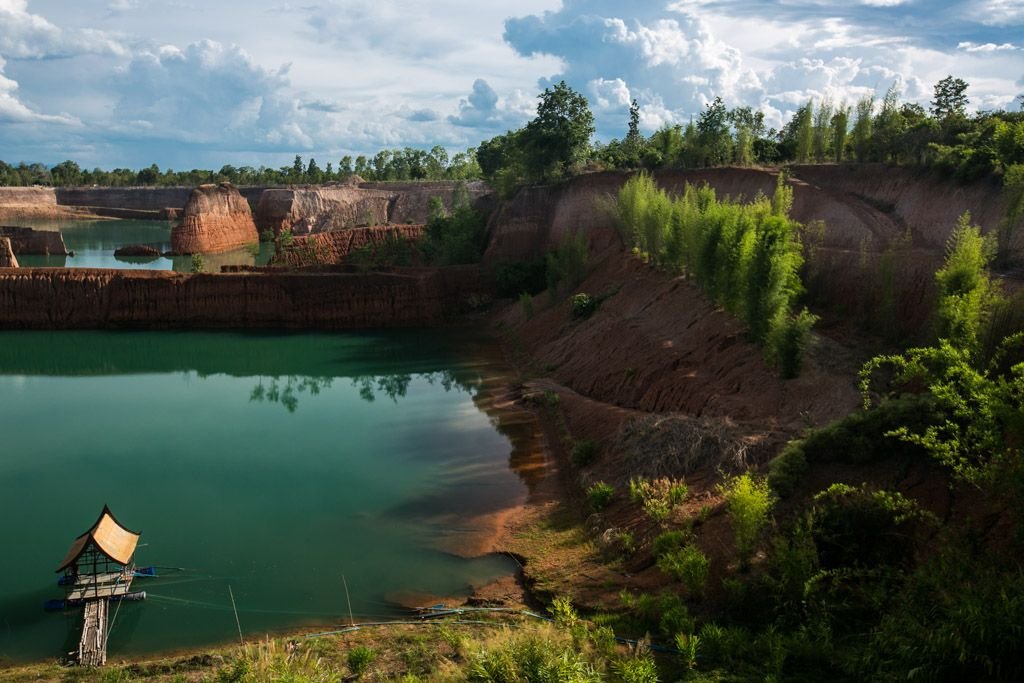 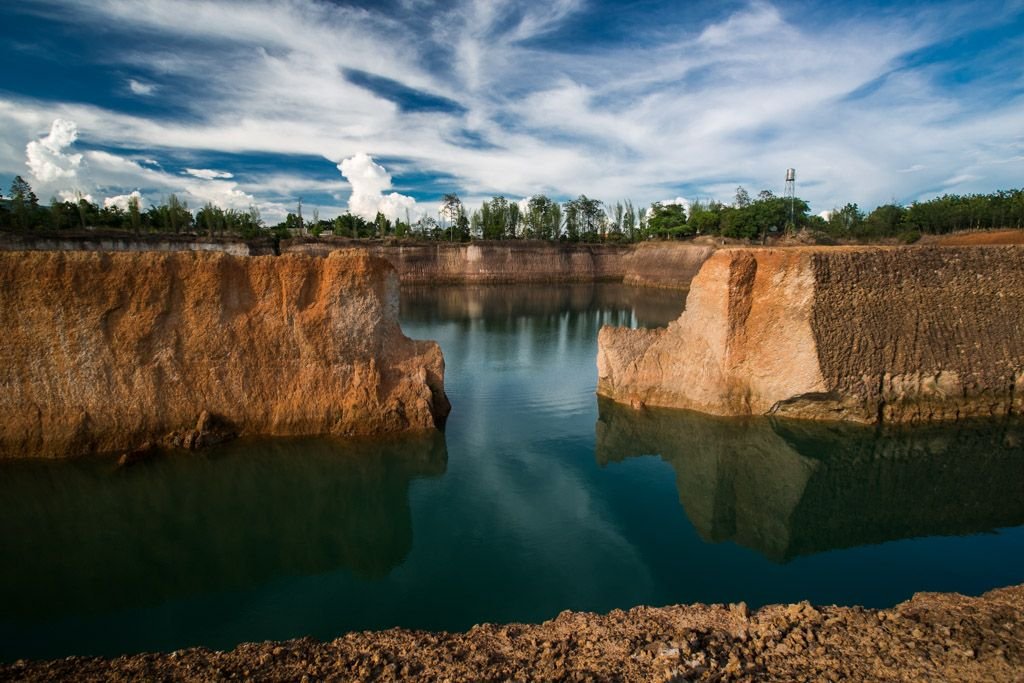 Well, by lake, apparently they meant “stunning man-made quarry fit for cliff jumping”, which I would have jumped at the chance of visiting had I known. The entire quarry was bathed in that glorious late afternoon light, the stuff we photographers dream of. The only signs of life were a small group of locals swimming nearby, and a photoshoot across the water where the model was waist-deep and in costume.

Smack in the middle of the quarry was an elevated stretch of land that extended about halfway across it, where people came to cliff jump. Without even thinking about it, I declared my intention to jump and headed straight out there. Looking over the edge, I realized I must be batshit crazy for wanting to do this – and that, if I thought about it for more than a second, I would probably talk myself out of jumping. 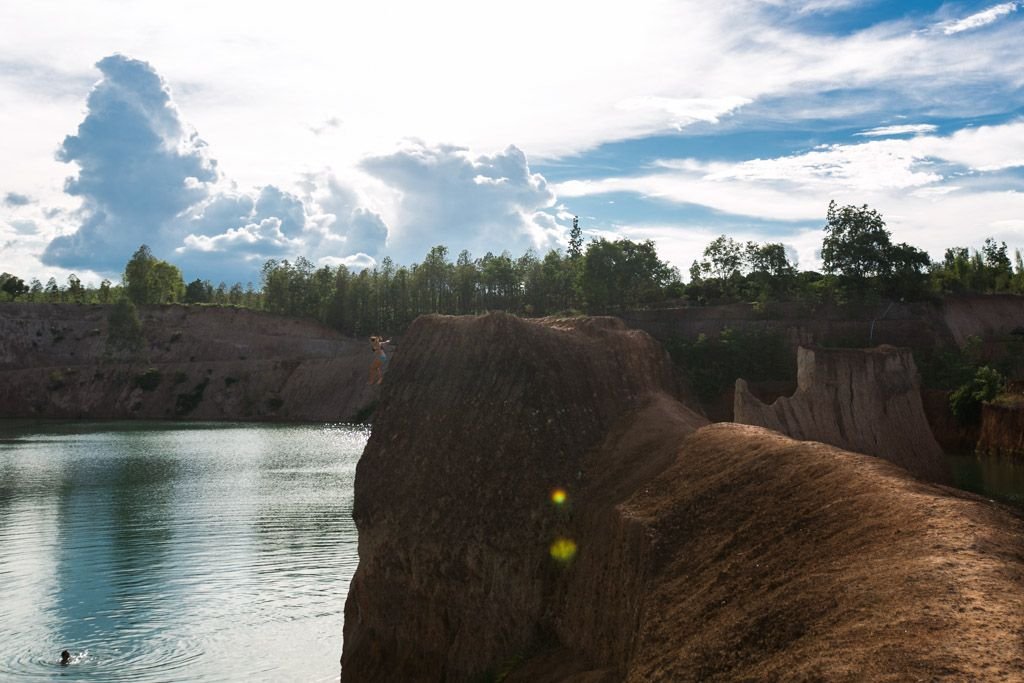 It happened so fast, yet I can remember every split second of my jump. The first half of it, I had ‘OMG OMG OMG’ running on loop through my head; the second half, I wisened up and adjusted my form so that I wouldn’t hurt myself when I hit the water. Aside from a bit of water up my nose and a slight wedgie, I emerged unscathed from my cliff jump. IT FELT AMAZING!

The Brazilian boys jumped as well, while Khai played photographer to document our jumps. We spent the rest of our time there just hanging out in the bath-like water, floating around and giving each other mud facials. 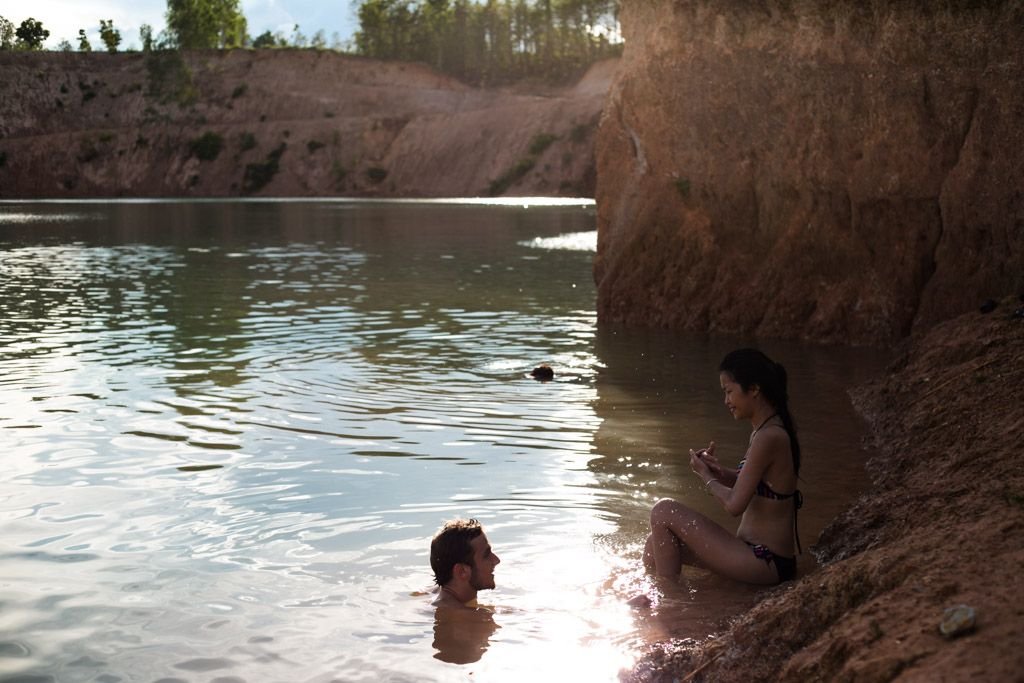 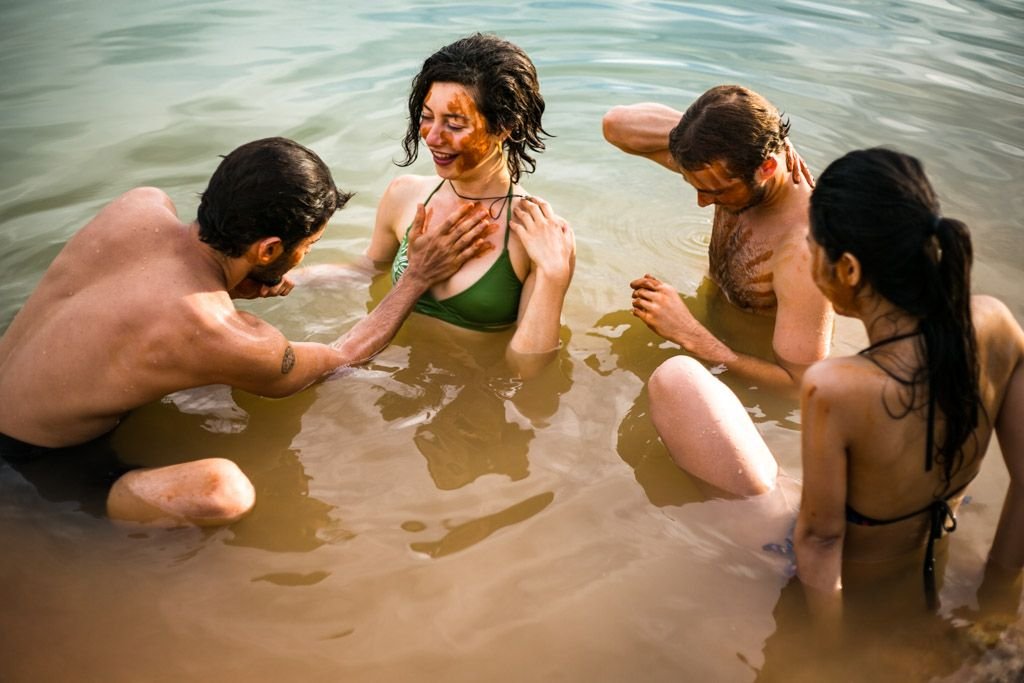 It was such a perfect day. To think that I could be in such a beautiful place that few tourists know about, adventuring with kids from 3 different continents – that’s what travel is all about.