I didn’t have much on my to-do list during my week in Ubud. I wanted to use this time to get some work done, lounge by the hotel pool, and indulge in healthful meals that only cost a fraction of what I’d pay back in the US or Australia.

But you know me – I can never sit still for too long! So I allowed myself one excursion from Ubud: a Bali cycling trip through the local villages and rice fields. Unfortunately it rained cats, dogs, and monkeys for most of the morning, but I still had a fab time with Bali Eco Cycling. Here’s a look at our Bali cycling adventure: 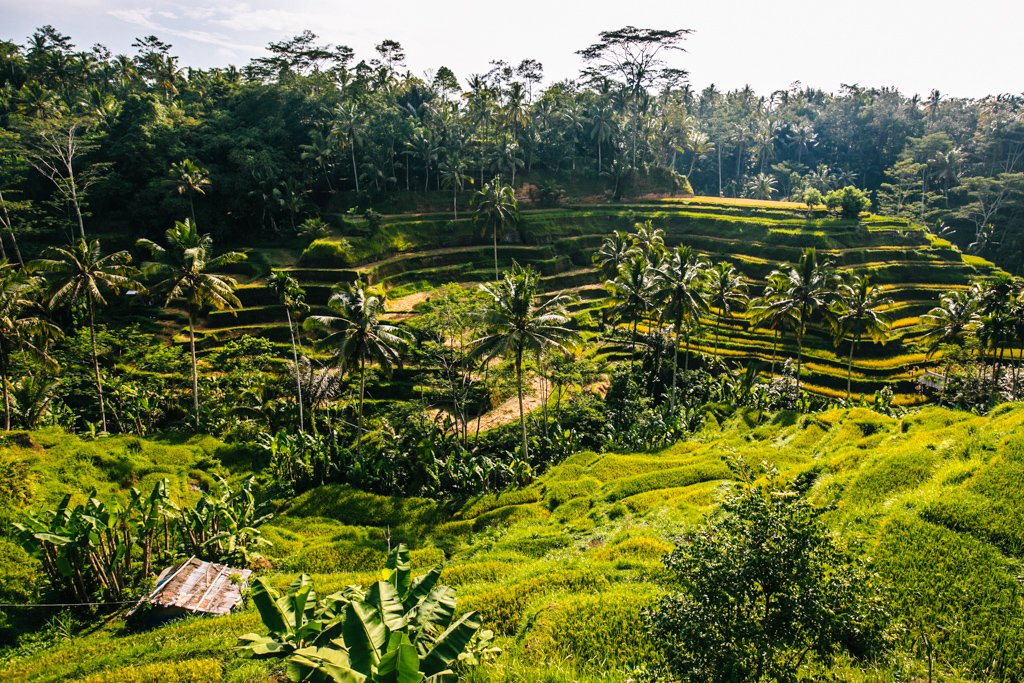 The Bali Eco Cycling crew collected me from my Ubud hotel bright and early and we made our way up to the north of Bali, where we’d be cycling downhill for 20-25km. We actually didn’t hop onto bikes until the second half of the tour, which was totally fine by me because I’m not a morning person. I need some time to wake up before I start by day, yannowhatimean? And if I get to wake up with some stunning Balinese scenery in front of me, even better. 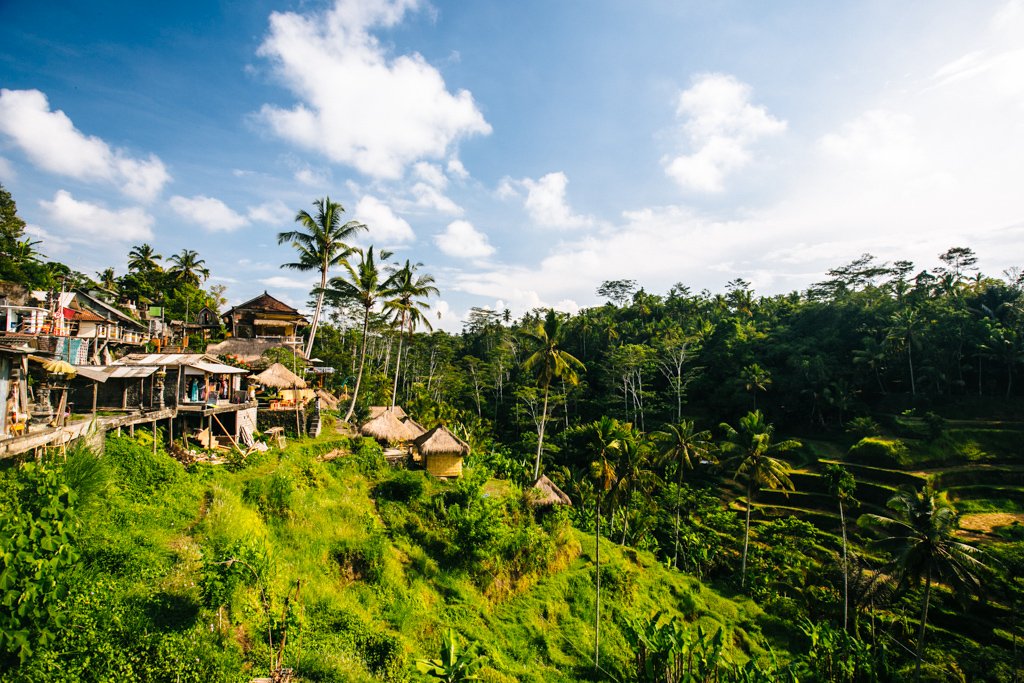 First, we made a quick stop at the Tegallalang rice terraces. I’d made the 1.5 hour walk here from my hotel earlier in the week and basically sweat out 99.9% of all the fluids in me while doing it. This time, it took less than 20 minutes by air conditioned van with nary a drop of sweat. I would have felt like a chump, but I’m glad I made the trek here solo and had time to thoroughly explore the rice terraces. On this trip, we only stopped at a lookout point for 5 minutes before carrying on.

I’m also glad we stopped in Tegallalang on this cycling trip because it was quiet and bathed in beautiful early morning light – which made for an entirely different look in photos. My solo venture here had been during late afternoon, while it was swarming with tourists and slightly washed out from the bright sunlight. 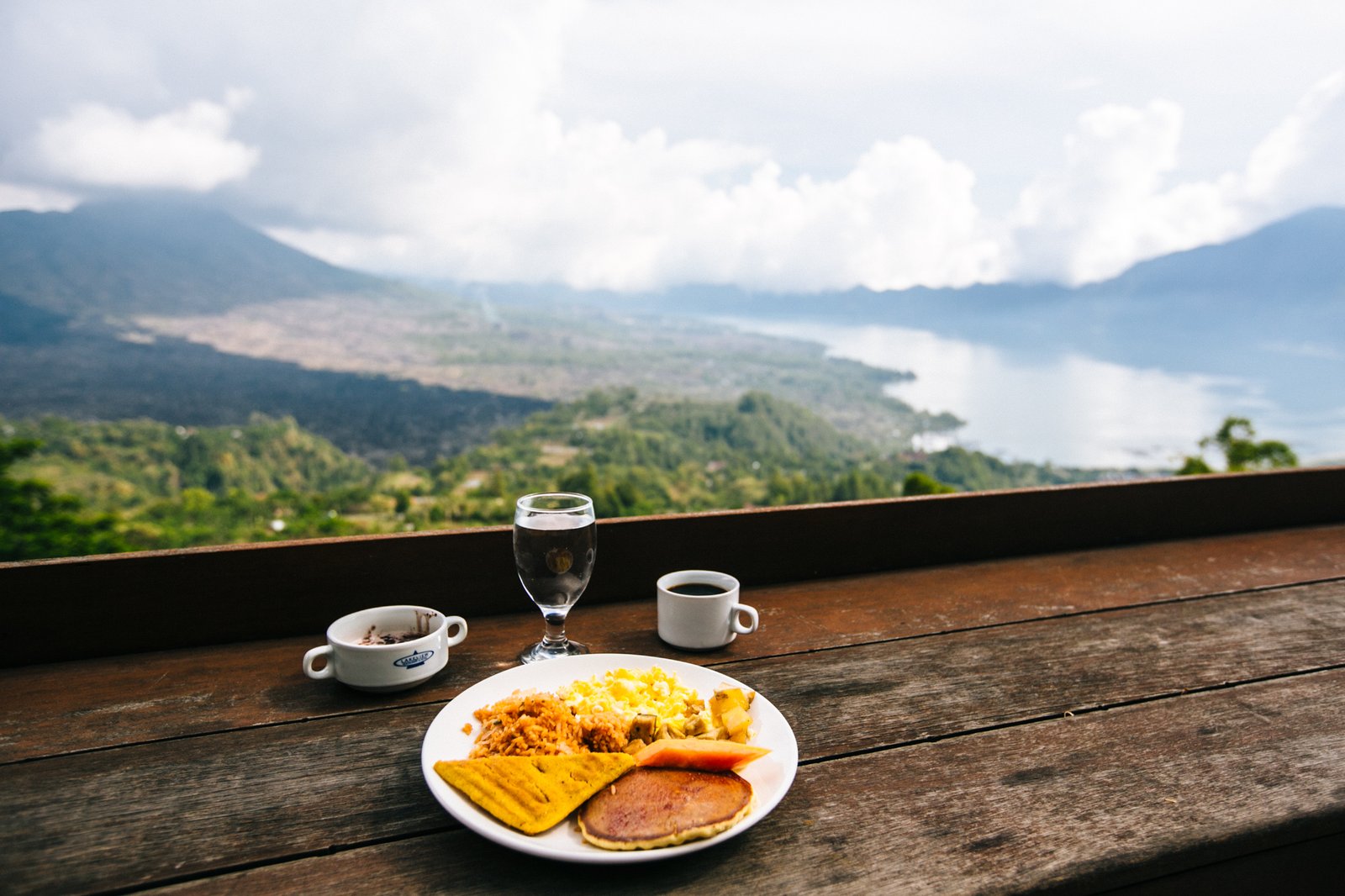 Within an hour we’d reached Mt. Batur, an active volcano in the far north of Bali. I’d briefly contemplated doing a sunrise trek here, but since I’d be doing plenty of that while on Java, I opted for this cycling tour instead. It worked out super well because I got to see the volcano anyway – and from the comfort of the breakfast buffet table!

Really, Mt. Batur and its neighboring crater lake were just gorgeous from here. This view alone was worth booking the cycling tour! 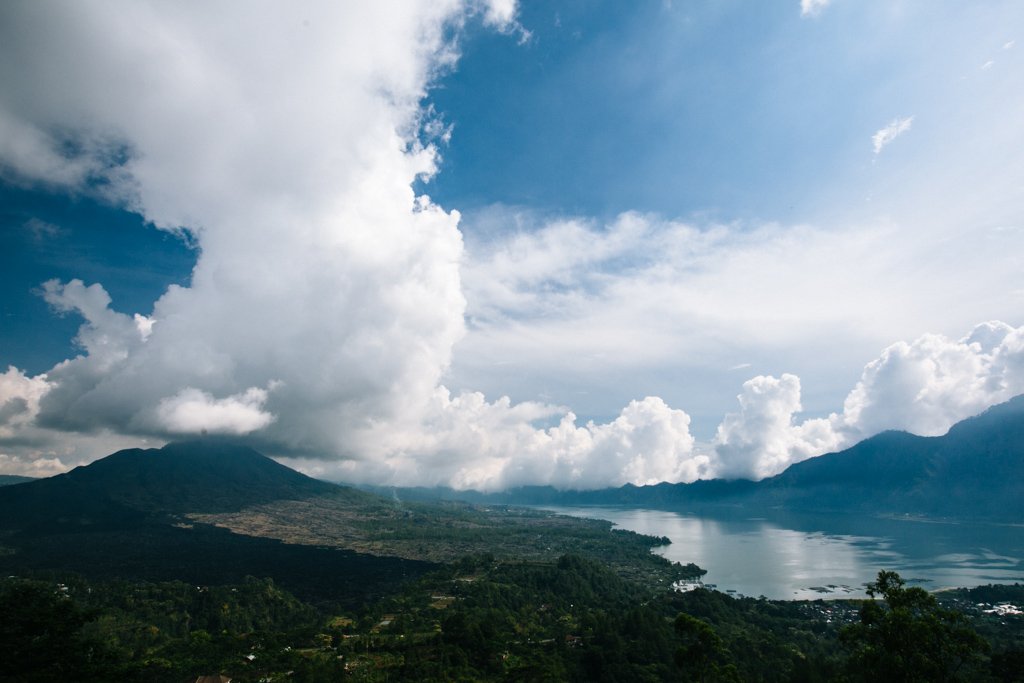 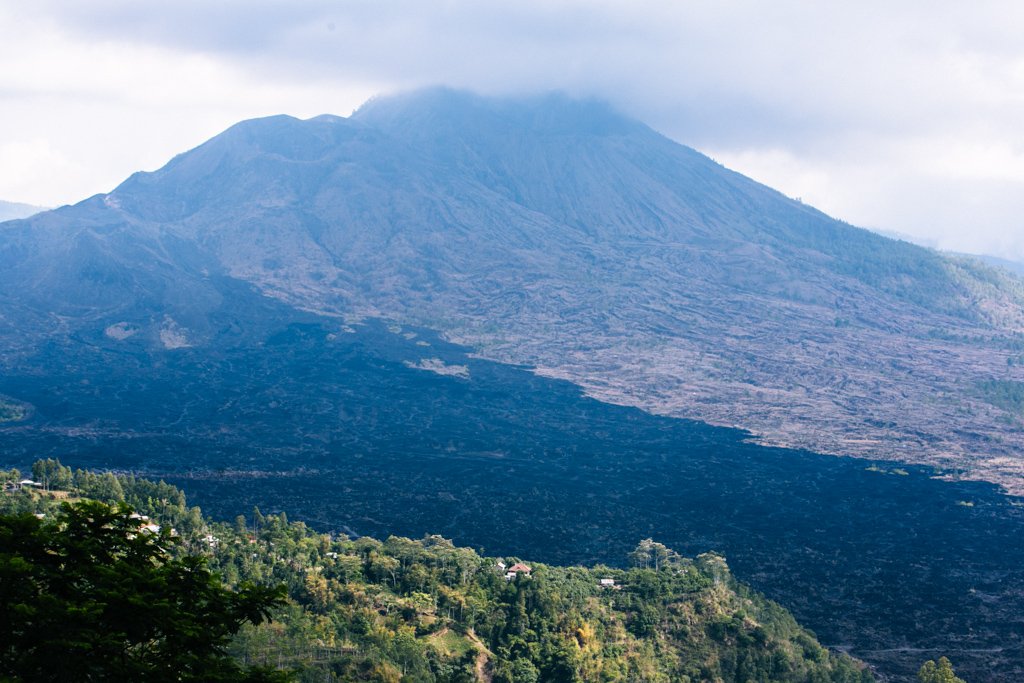 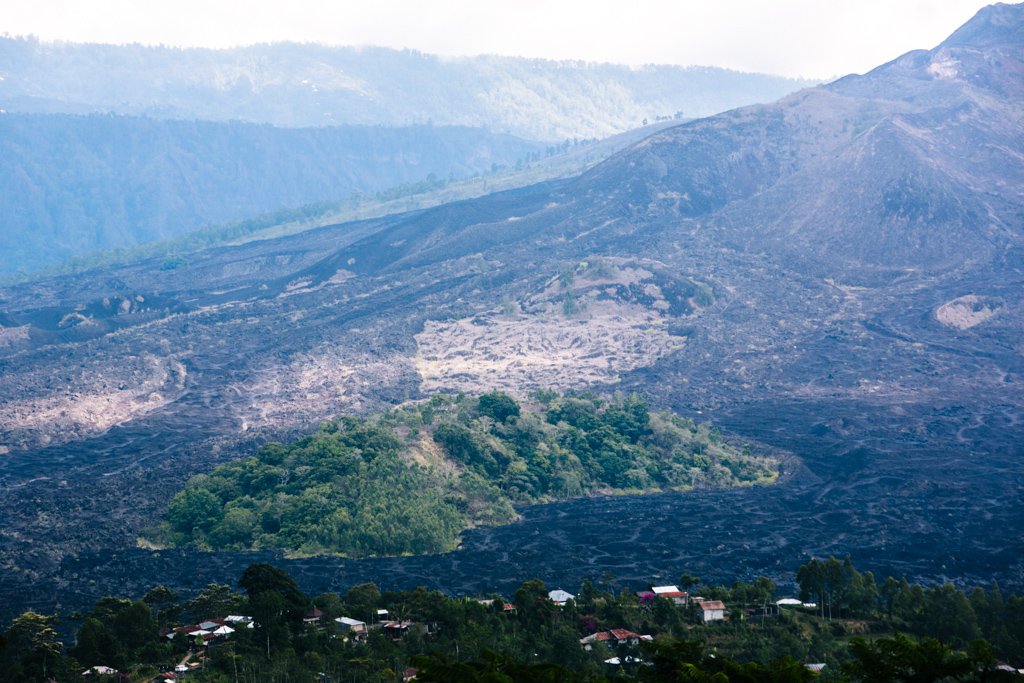 I noticed the ominous clouds rolling in and knew we were in for rain. Sure enough, they opened up while we were tea and coffee tasting at our next stop. Thankfully I had coffee to keep me from getting too sad about the rain. We were all given tasting paddles containing little glasses of herbal teas and various coffees to try. In addition, I bought a cup of Bali’s famous Luwak coffee, made from beans that a luwak (looks like a cross between a cat and a fox) consumed and excreted – just like the “shit coffee” I tried in Vietnam a couple years ago! 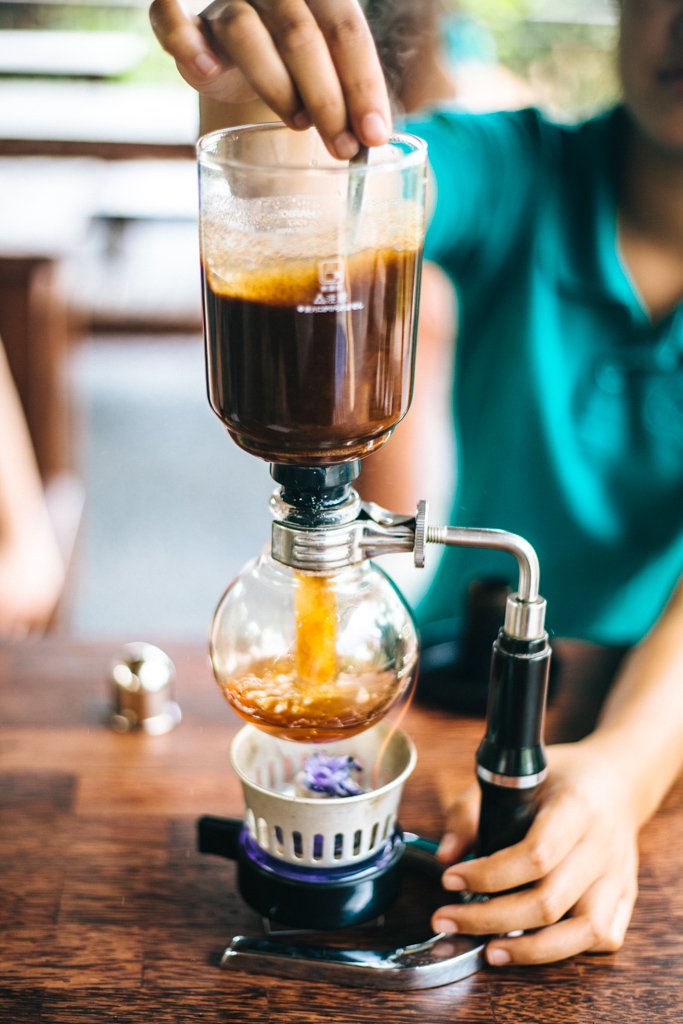 It was fascinating to watch them manually roast the coffee beans over a fire at this plantation and then make the coffee with an apparatus that looked to be straight out of a science lab, but my ultimate verdict? Luwak coffee is better than the normal Balinese coffee (which is about as good as instant coffee, i.e. not at all good) and very strong, but not very tasty overall.

I’m not a big tea drinker, but I was really interested to learn about the different herbs they grow in Bali and how they’re used as natural medicine. One of the concoctions they served us was ideal for soothing menstrual cramps; another was ace especially for guys who need a burst in energy and stamina (wink wink). 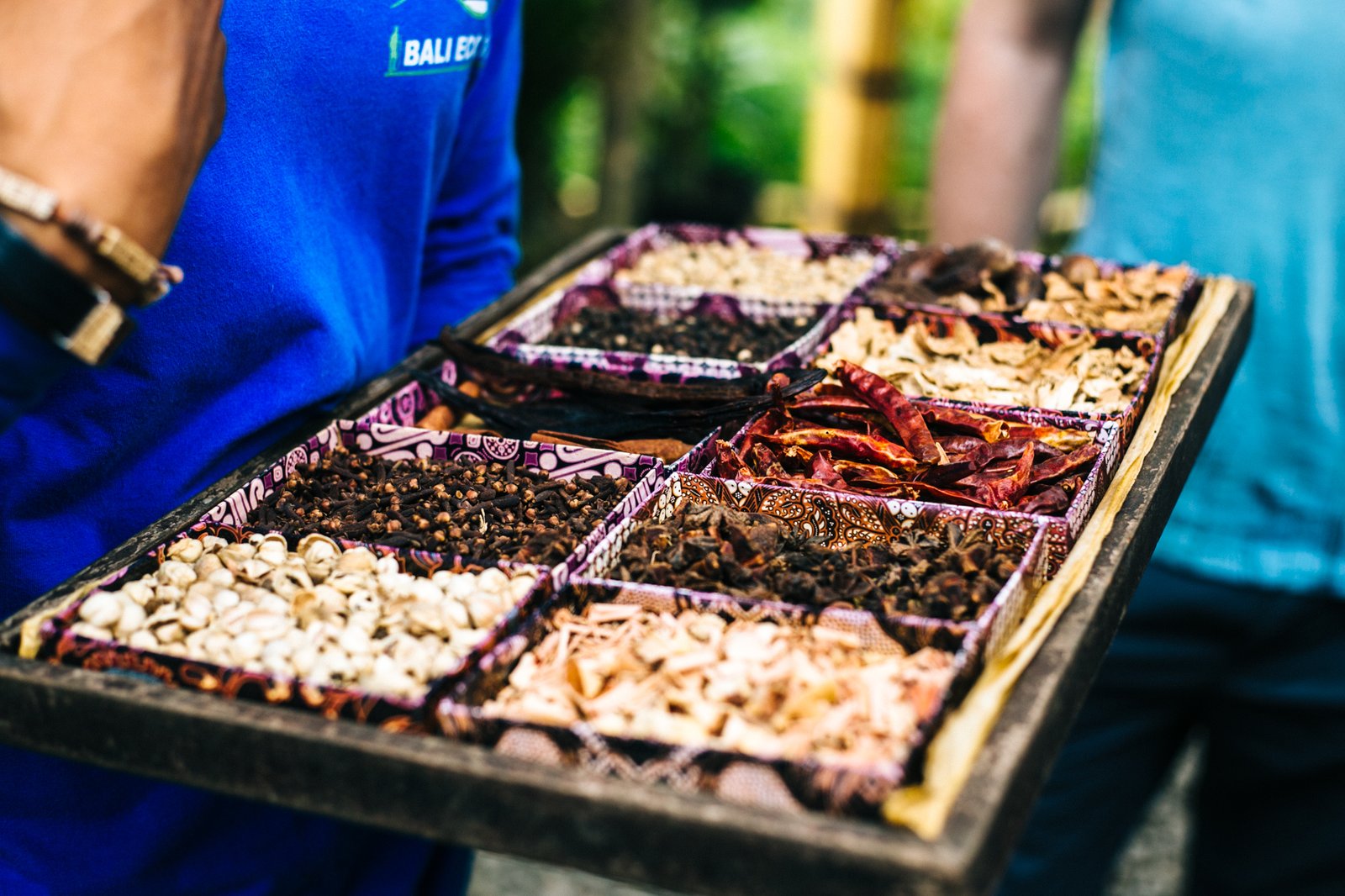 After the plantation stop, it was finally time to ride! We donned our ponchos and hopped onto mountain bikes in the pouring rain and began our descent through the Balinese countryside.

I have to admit, this part of the day was disappointing due to the terrible weather. Visibility was poor, and there wasn’t much point in stopping off anywhere because we couldn’t see anything or anyone in the rain. I’d been stoked about exploring the villages and getting some cool photos of the rice fields and homes, but my camera remained locked up in the van because it would have gotten drenched in the storm. I’ve already had it die on me once due to water damage back in Thailand – I wasn’t about to have that happen again on my travels! (hello, PTSD) 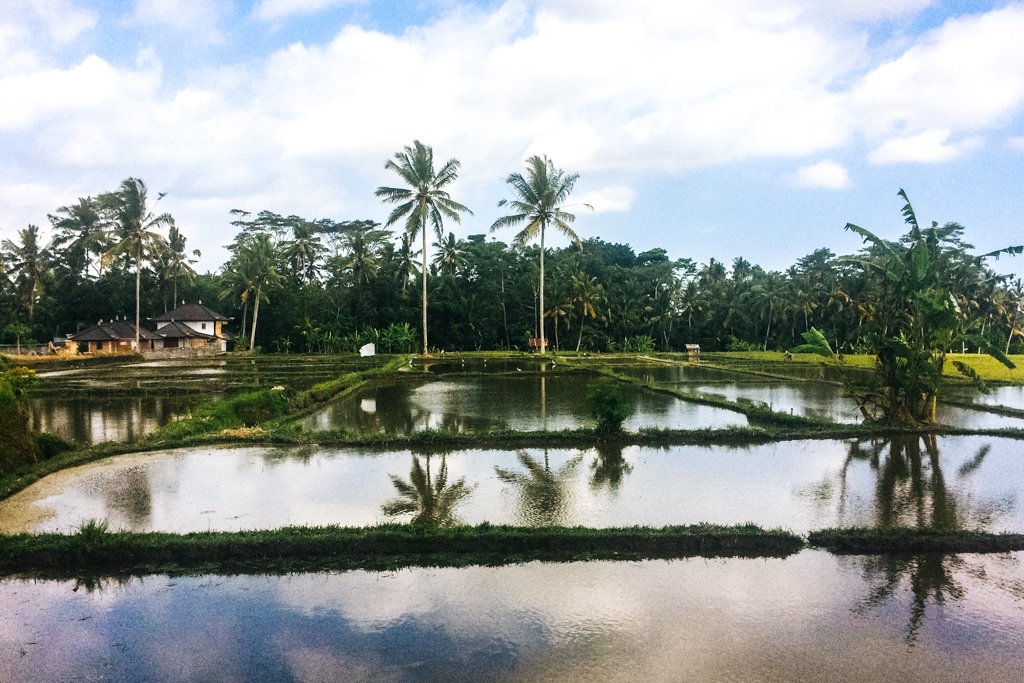 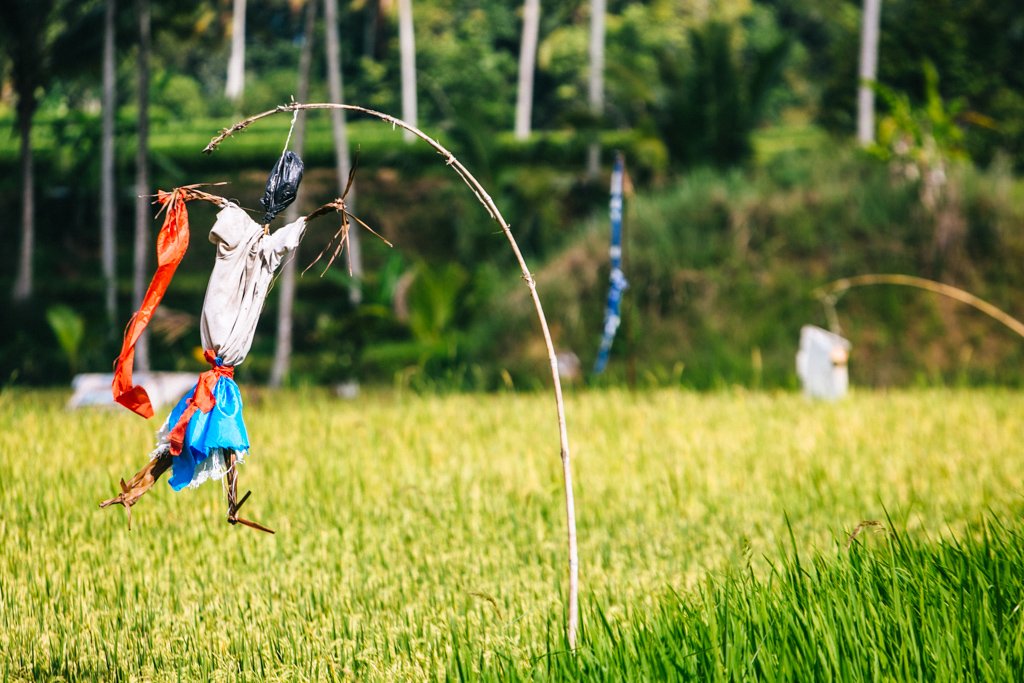 What the Balinese countryside would have looked like, had it not been raining.

We did stop off a couple of times, though. I loved getting a tour of a Balinese family compound. They tend to look rather temple-esque on the outside with the high walls and statues, but the inside is an open air maze of small buildings either inhabited by different generations of families or used for different purposes. We stood beneath the underhang outside of the northern-most room, the one reserved for the grandparents, and sought temporary shelter from the rain while our guide gave us the scoop on how Balinese families live. Once a family owns a compound, it is theirs for life. When a son marries, he and his new wife will move into a separate building in the compound to start their own family. And so on through future generations.

Oh, and you know how every other person in Bali seems to be named Wayan? It’s because they have a system for naming children: the first-born is always named Wayan, the second Made, third Nyoman, and fourth Ketut. Balinese families aim to have 4 children, to fill these 4 names. And if they happen to (accidentally) have a 5th child? Well, he’s called Wayan-oops (the poor kid!). To differentiate between the heaps of other Wayans, Mades, etc, most people are given a unique nickname as well.

Our guide cheekily told us that guys “shop around” for wives, often dating several women before committing to the first one who falls pregnant – but that nowadays, the Balinese marry more for love (and consequently, the island’s divorce rate has plummeted). 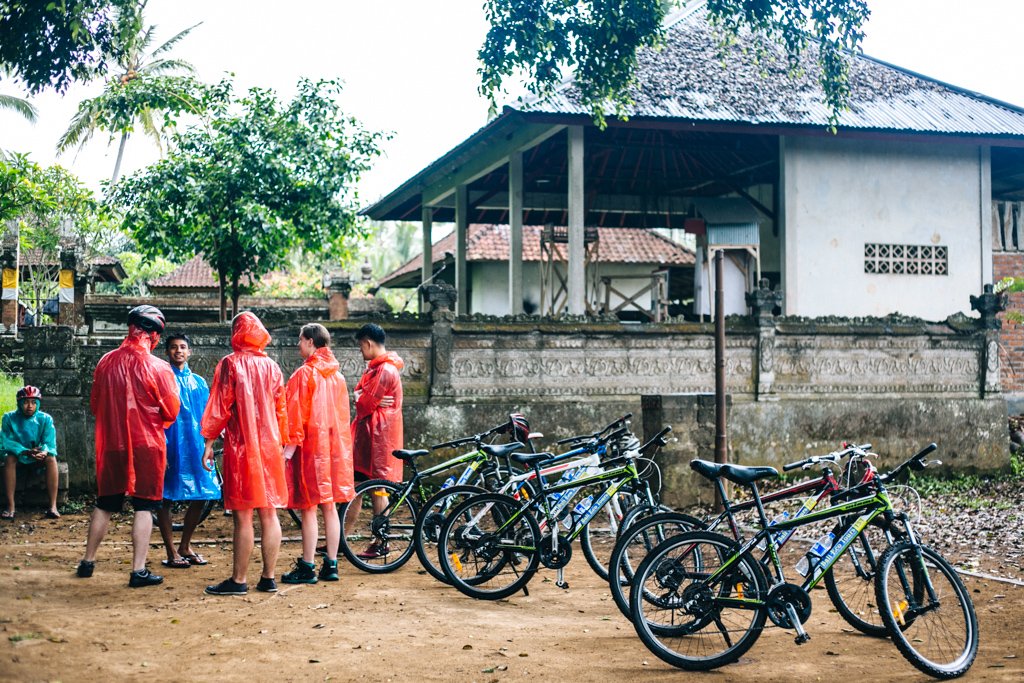 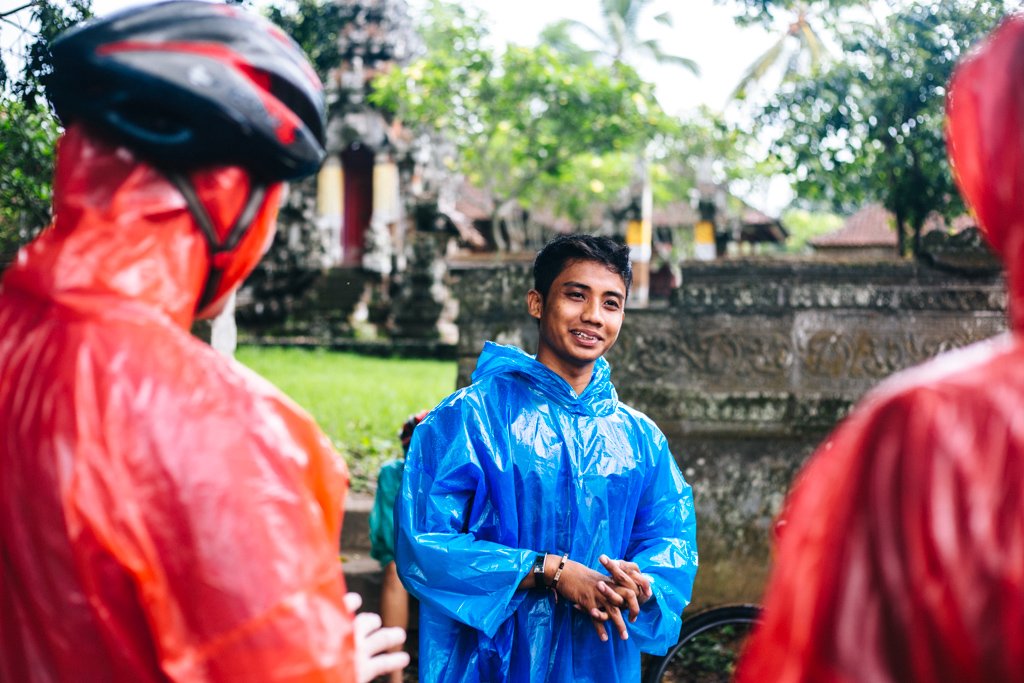 The rain decided to give us a break at the very end of our cycling journey as we passed through a village packed with people on the streets for a cremation ceremony. It felt like we were crossing a finish line with all the kids cheering for us and shouting out hello!

Our tour ended on a high note with one of the best meals I had my entire 2 weeks in Bali: a buffet lunch in a restaurant we had all to ourselves. I got to try gado gado (sushi-like green rolls) with peanut sauce, smoked duck, and other delicious rice dishes I won’t pretend to know the proper names of. 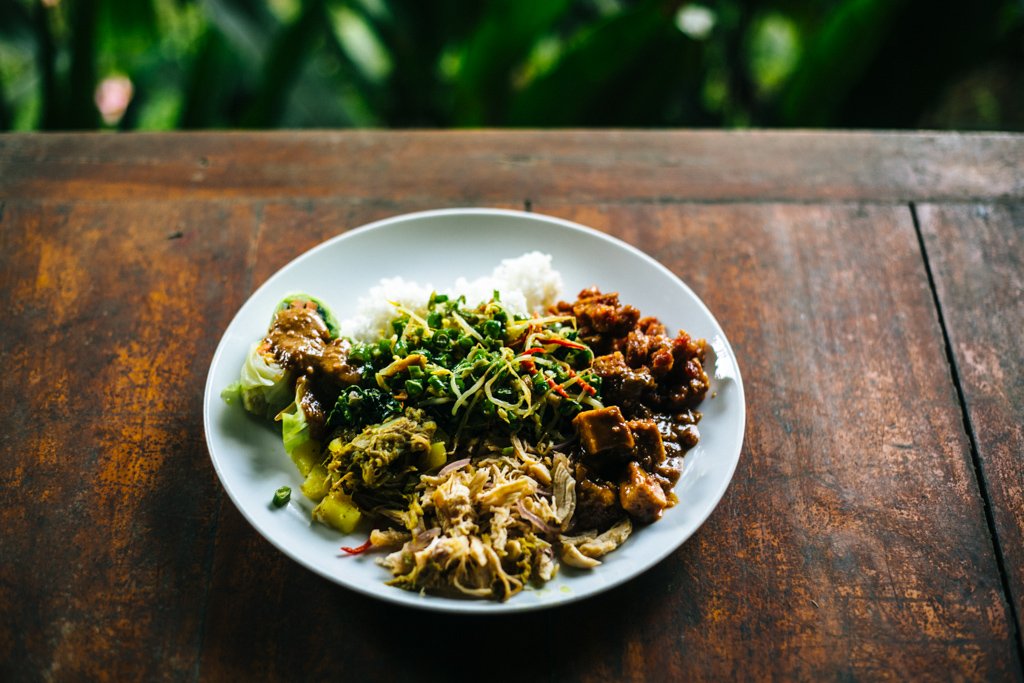 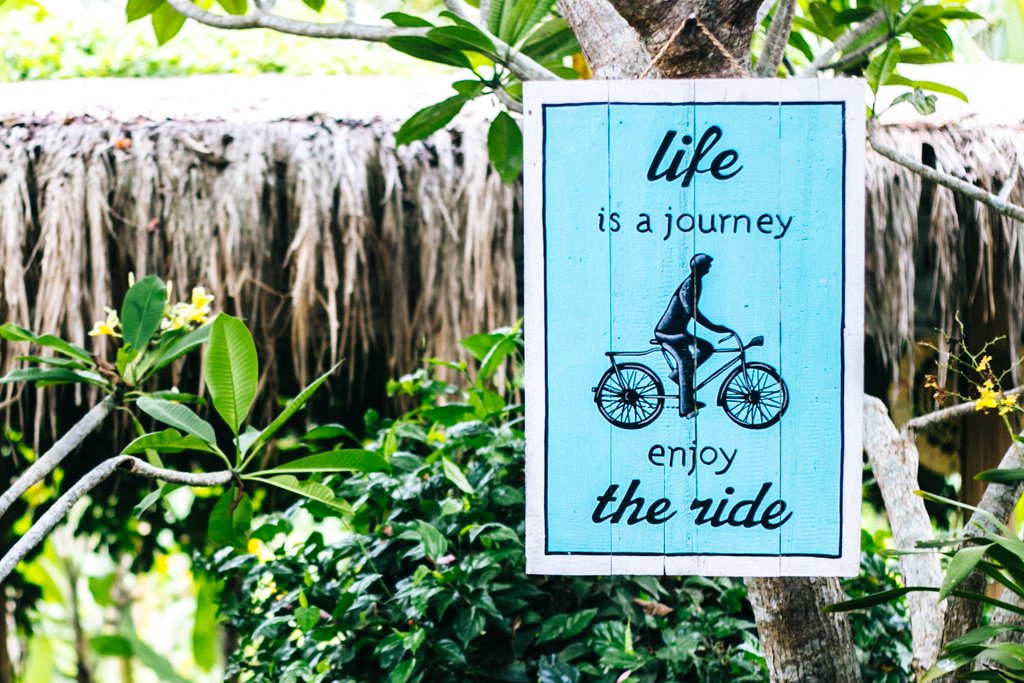 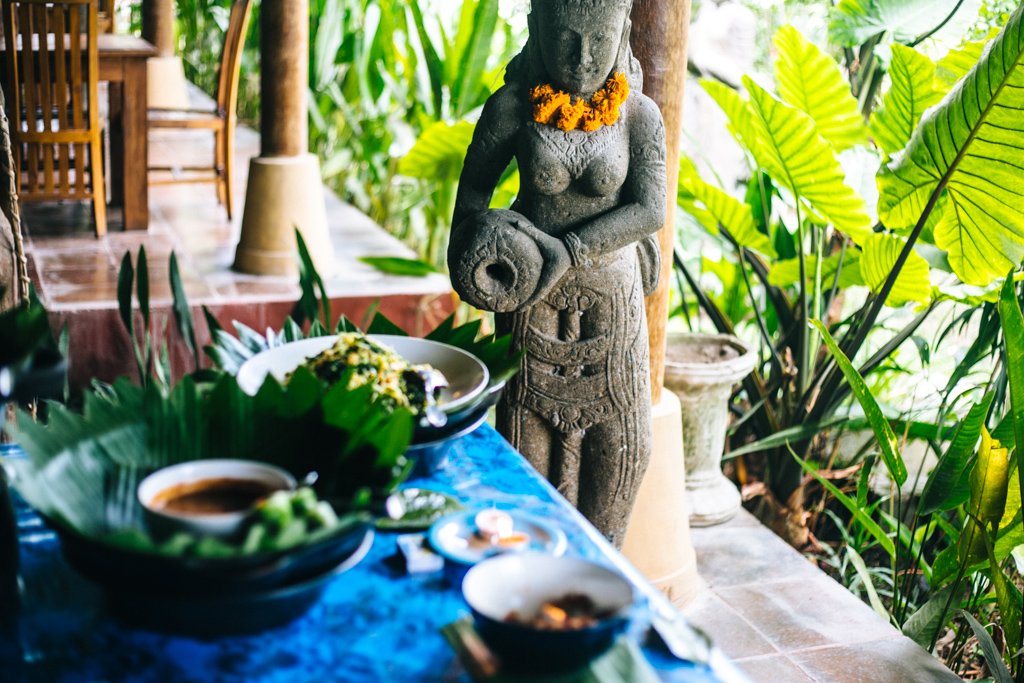 Even though the cycling portion of the trip was more or less a washout due to the heavy rain, I loved the view of Mt. Batur, the fantastic lunch, and most of all the cultural nuggets I gleaned from our guide. And since I’ll have to leave Australia every 3 months next year while on the tourist visa, I’m pretty confident that I’ll be returning to Bali in 2016. With any luck, it’ll be during the dry season when I can have another go at cycling the Balinese countryside!

Thank you to Bali Eco Cycling for providing me with a complimentary Bali cycling tour. Note that all opinions expressed here and elsewhere on this blog are my unbiased own, and are uninfluenced by any gifts or incentives I may receive.

Tags: AsiaBalibikingIndonesiaSoutheast AsiaSponsoredUbud
Previous ArticleThe Down Under Report: Month 12 of 12
Next Article Bye Bye Budget: Why You Should Splurge In Bali