A day that starts off with me losing my phone (yes, again) and ends with me being stranded for several hours waiting for my ride looks from most angles to be a crap sandwich.

But not the day I finally got to hike to Wandjina’s Window; no, this one was more like a scrumptious, bacon and avocado-laden sandwich with stale bread that I ultimately cast aside. It’s the inside that counts anyway, right?

I found my phone and I got picked up and driven home in the end, but either way it was worth the mild stress I suffered because HOLY WANDJINA, this was one of the most beautiful hikes I’ve ever done. 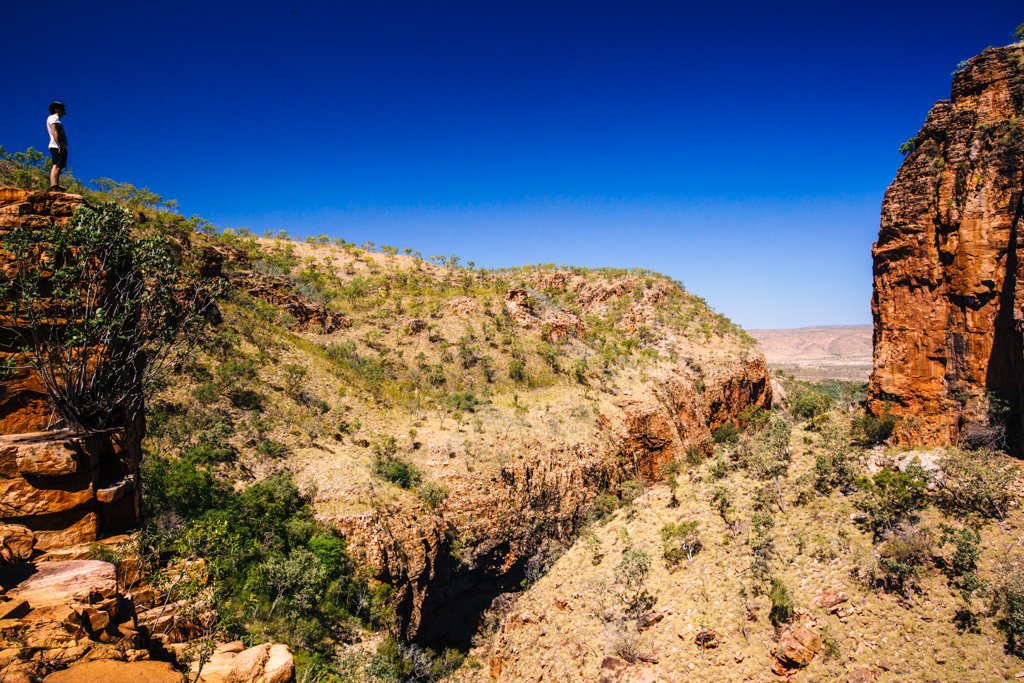 There are lots of gorge hikes at El Questro Wilderness Park with well-marked trails, but there are also a few more difficult ones that you could only manage if you or someone you were hiking with knew the way. One of these is the hike to Wandjina’s Window and the G-Spot, which is accessed via a subtle turnoff just after Marker #2 on the trail to Emma Gorge. From here, you cross the creek and immediately start the long, steep, rocky climb above the gorge.

At the top, there’s actually a footpath you can follow for a bit that goes further around the gorge, but the tricky part is knowing when to veer off it and start going downhill. There are zero trail markers to indicate this diversion. The right way will see you cutting through bush and soon emerging on a rock platform with approximately this view: 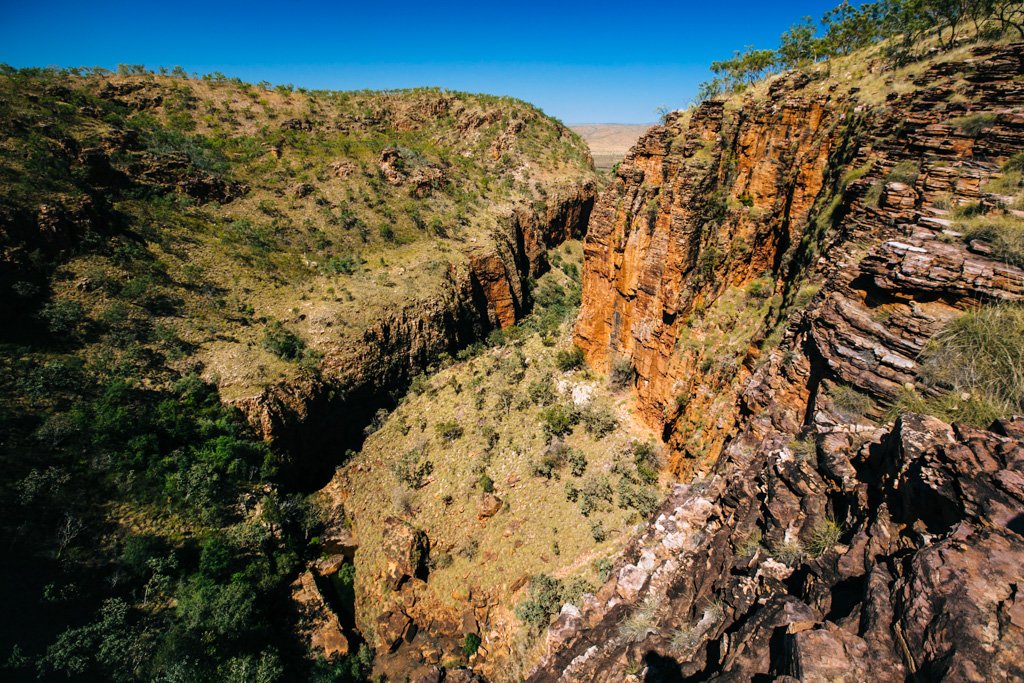 It’s not too much further to get down to Wandjina’s. There’s some fun downhill rock climbing and then soon the rock windowframe will come into partial view; a bit more bushwalking and you’ll pop right out into the frame.

Excuse my sudden intense enthusiasm, but WOULD YOU LOOK AT THIS AMAZINGNESS?!! 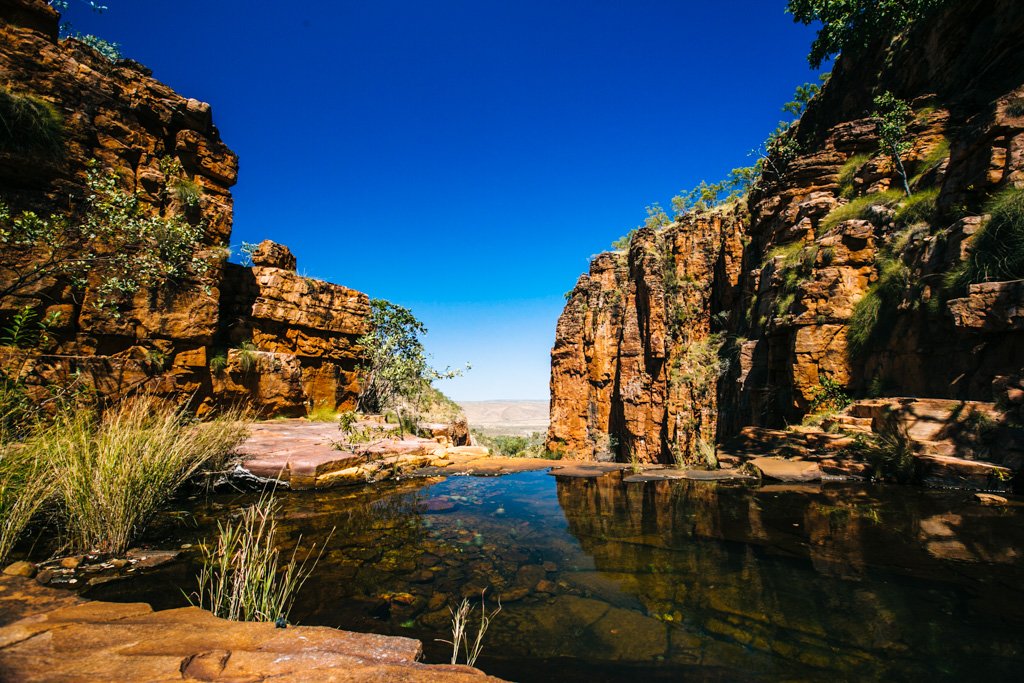 How killer would it be to camp right here, safely inside this ledge? It would be grueling to have to lug all your camping gear up that rocky cliff at the beginning and through the bush afterwards, but totally worth it to lay your swag out and light a campfire right here.

Instead, I contentedly settled for digging into my peanut butter sandwich while we sat for awhile and soaked in the vista. 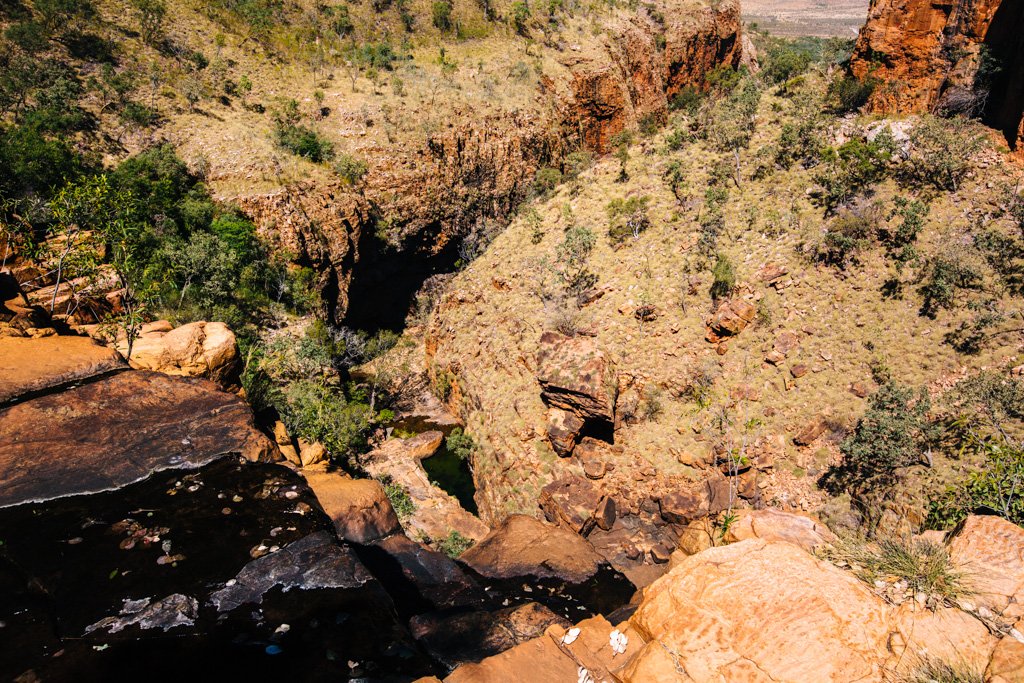 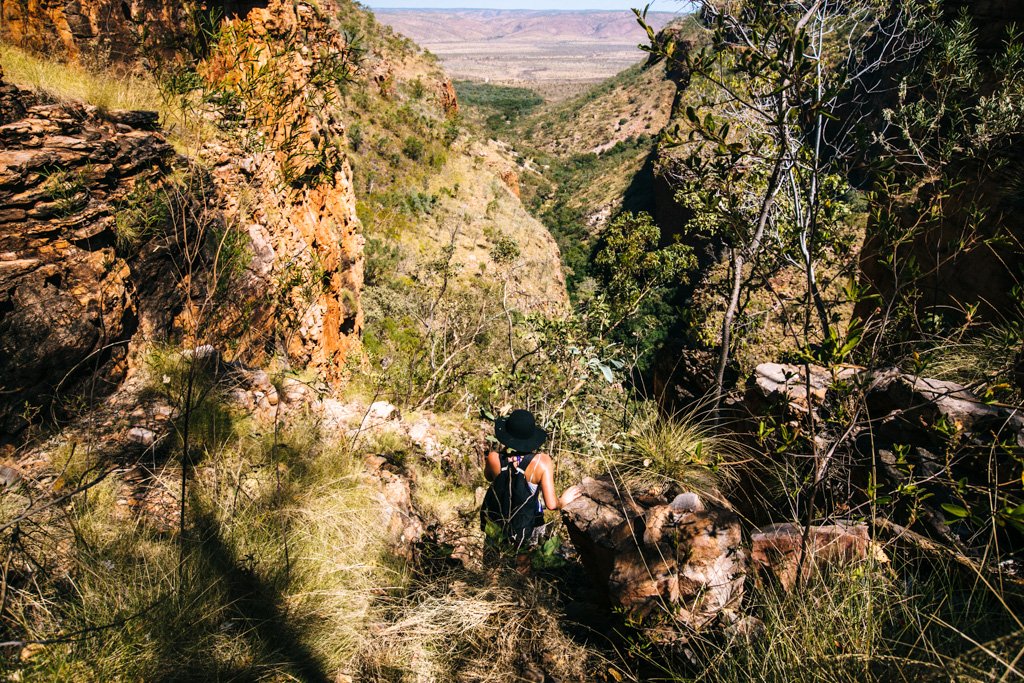 I could have turned around and headed back after seeing Wandjina’s Window (or so I thought), but the others with me were determined to reach the G-Spot: aptly named because it’s quite hard to find the way down into it. I tagged along at the rear as we trudged through prickly bush that tore up all our legs (note to future self and all y’all: wear long pants on this hike!). We were on no semblance of a path for 90% of this segment. There were a few points that were so slippery that we had to slide downhill on our arses to avoid a fall. Getting there wasn’t pretty, but the finish line was completely stunning. We finally popped out by one big pool just beneath Wandjina’s Window, containing water that had flowed down from it (during the dry season, it’s just a trickle of water falling; during the wet, it’s a proper waterfall). 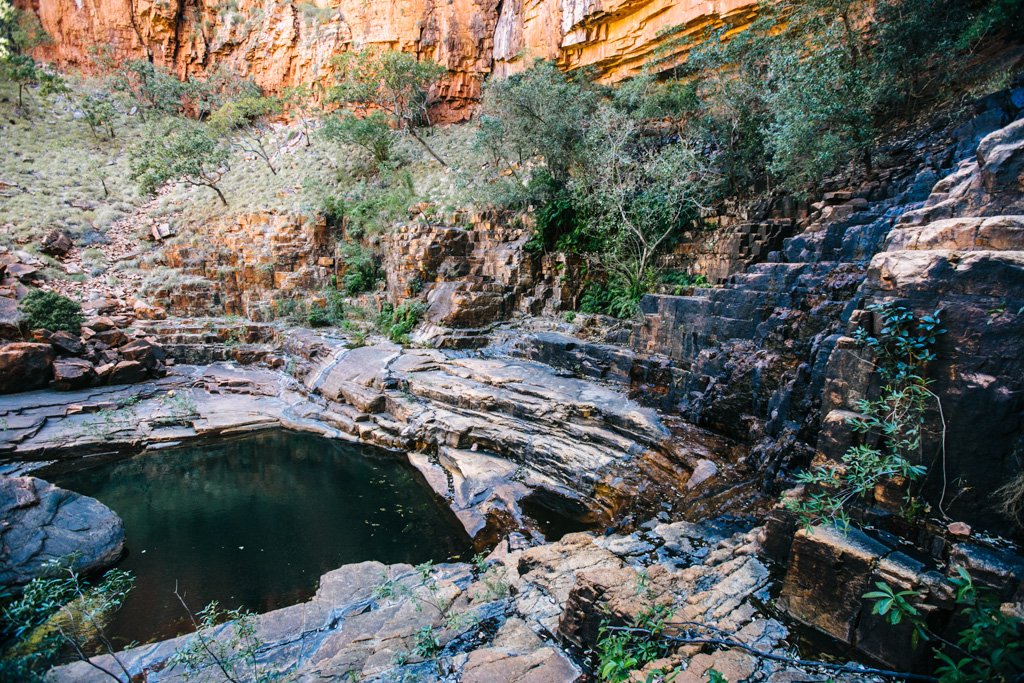 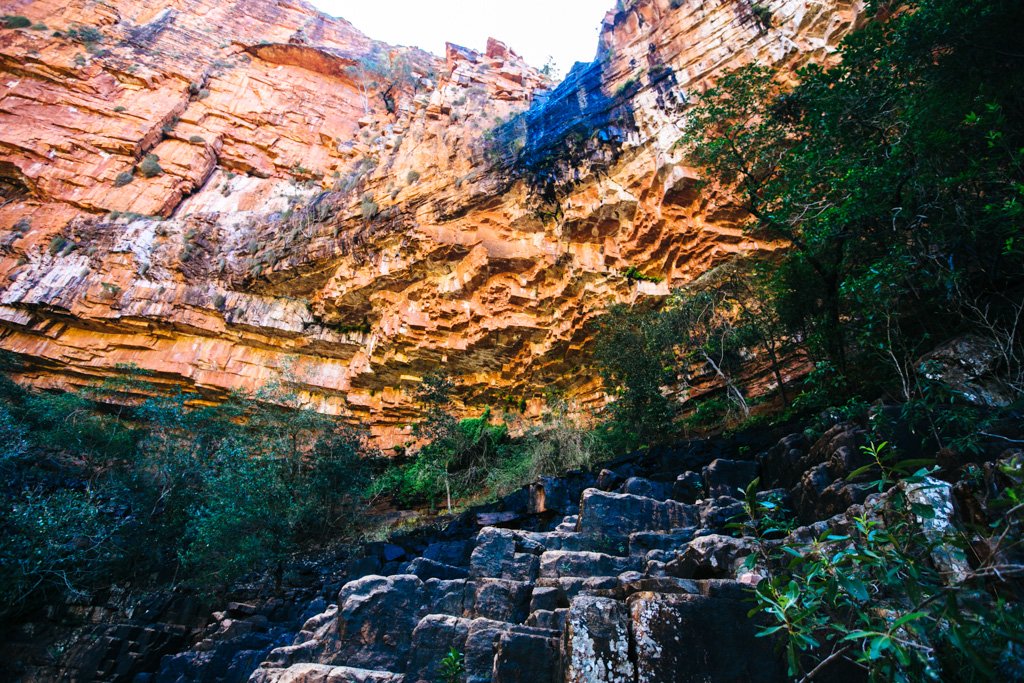 While it looked to be a fun little swimming hole, complete with a boulder to jump off of, the whole thing was covered in shade by the time we arrived. So we opted to carry on further: past a thinner pool laced with neon green something-or-other, and to a smaller, shallow pool in full sunlight just by the edge. We’d traversed the G-Spot and made it to the very top of the waterfall at Emma Gorge! It was so surreal looking down at all the people swimming in it; even moreso to think that I have been one of these people twice before, blissfully unaware of the Eden-like landscape that existed just above.

I’d been looking forward to a swim all morning, but once we arrived at the top of Emma Gorge I couldn’t help but sprawl out and nap in the sun. I awoke refreshed and made a point to fully absorb my surroundings: the three pools, the surrounding rock formations, Emma Gorge below, the views leading out into the Cockburn landscape beyond the gorge and the main road. 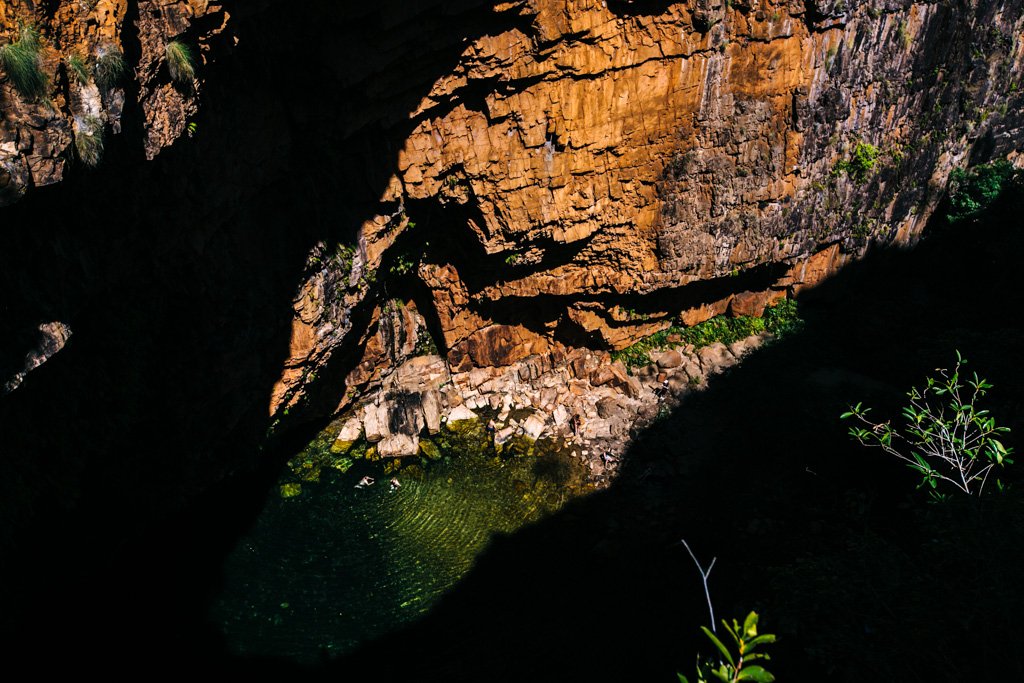 Looking down into Emma Gorge. 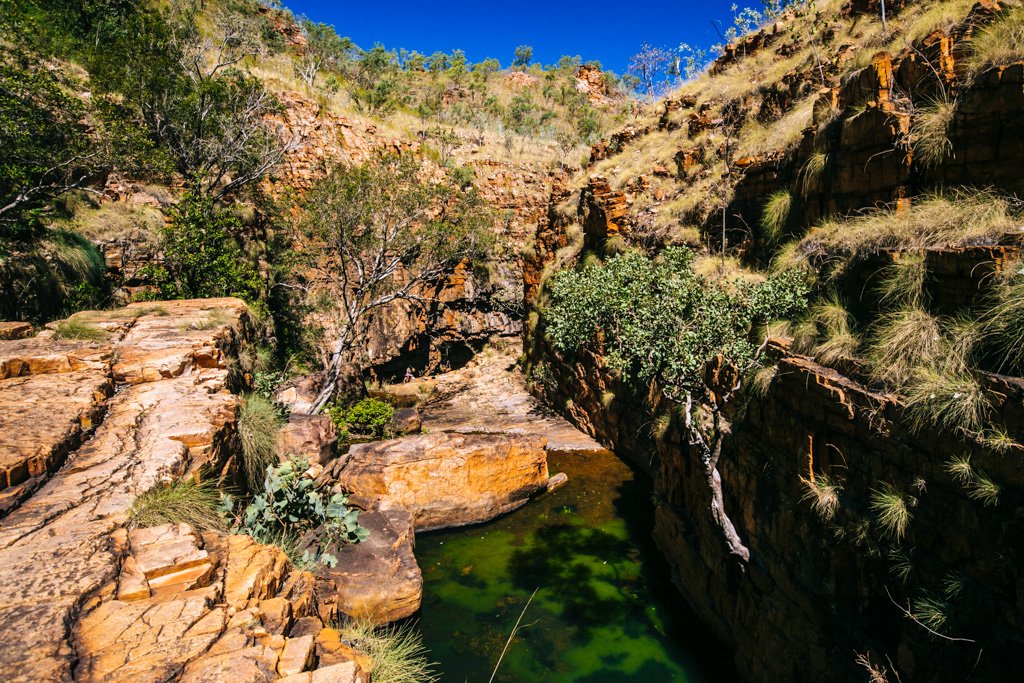 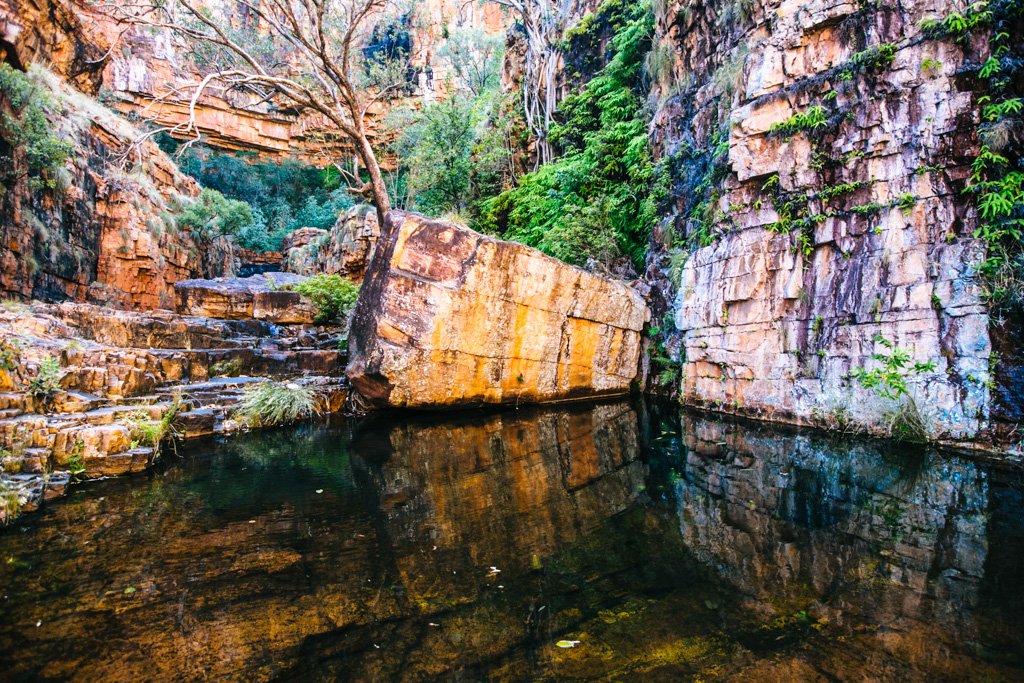 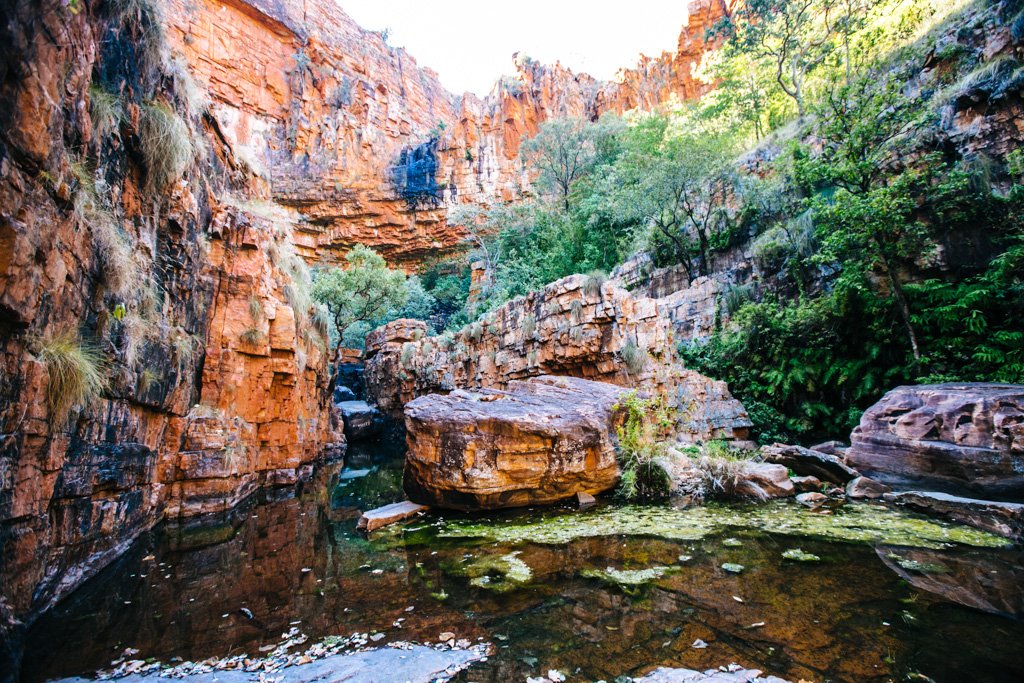 We took a different route back and made a loop instead of backtracking, missed the unmarked turnoff a few times, but eventually made it back by late afternoon. Nevermind that our ride back to El Questro Station wouldn’t come for another 5.5 hours – we had successfully looked through Wandjina’s Window and found the G-Spot, and it was damn near orgasmic. 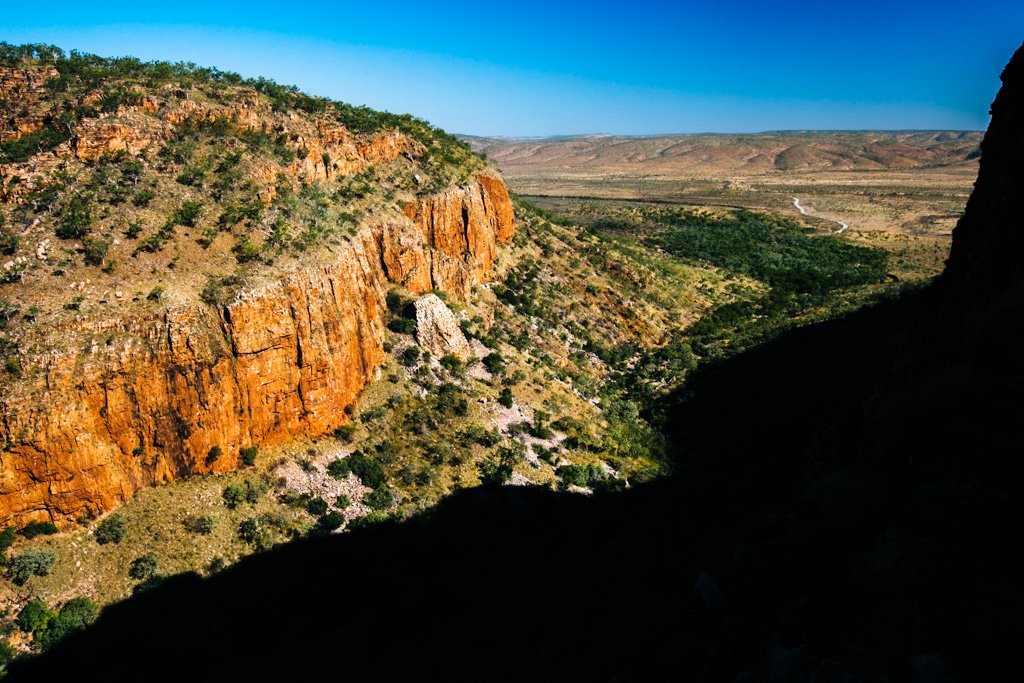 Tags: AustraliaEl QuestrohikingThe KimberleyWestern Australia
Previous Article21 Of The Best Views In Sydney
Next Article All The Things I’m Excited For In Melbourne