By on Asia India Misadventures

I was not in the greatest shape when I arrived in Jodhpur. Seriously sleep deprived and fresh off the night train from Jaisalmer, I stumbled into my hotel and practically begged to check into my room early at 6am. I slept HARD from 6am-12:30pm, periodically waking up to deal with my first bout of Traveler’s Diarrhea (oh yeah, it’s a thing).

By 1:00 I figured I should probably get myself together and wander into town. I also probably should have had a proper breakfast (lunch?) as I hadn’t eaten since dinner the night before, but my appetite had been zapped to zilch the past few days. I had no desire to eat any Indian food – quite the quandary, given the country I was in.

I had no cash on me, so I figured I’d just walk to the Old Town rather than take an auto rickshaw. The concierge insisted it was about 2.5km, but I can attest that it was at least twice that. So there I was, the only white girl on the street, making my way in the general direction of the Old Town but not really knowing where I was going. I periodically shooed away rickshaw drivers who would stop to grab my attention, and raced past hordes of children who would swarm me asking for money and then throw rocks and shoes at me when I ignored them.

I finally made it into town (and bonus: to an ATM!), completely drenched in sweat. On the recommendation of some folks who’d been on the camel safari with me a couple days ago, I sought out The Omelet Man. Evidently, there’s an older gentleman who has made nothing but omelets for the past 40+ years, and has received a bit of fame after Lonely Planet mentioned his Omelette Shop in their guidebook. The Omelet Man urged me to try his cheese & masala omelet (“you try and if no like, no pay!”). I was just psyched to get some protein and non-Indian food in me, so I agreed and took a seat on a stool next to him as he prepared my food.

Photo Credit: thesiracusas.com
Almost immediately, I started feeling funny. Dizzy, but mostly just hot. I chugged some water and felt even worse. I remember thinking it was really freakin’ hot, then leaning forward with my head in my hands to try to make the dizziness subside. I couldn’t touch my omelet yet, so I placed it on the table in front of me.

The next thing I know, I’m surrounded by 10 or so Indian men and being helped back into my seat. I had fainted in front of the Omelet Man – possibly one of the most embarrassing moments in my life. The guys kept motioning to the side of my face, saying it was dirty and I could wash it off later. I felt a slight burn from the scrape, but being dirty was pretty low on my list of concerns considering I had just faceplanted and lost consciousness. One of the men set me up in back of the shop near a fan and told me to sit for 30 minutes. I devoured my omelet and even ordered another one while I was on my 30min recovery plan. My god, these omelets are incredible! They’re served in the form of 2 white bread sandwiches, and there’s just the perfect amount of creamy cheese mixed in. So delicious! 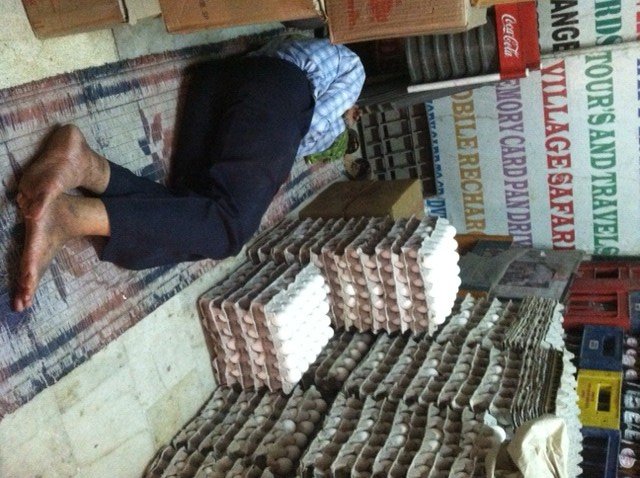 While I was waiting for Round 2 and flipping through my guidebook, the Omelet Man came in, spread out a thin mat next to a wall of egg crates, layed down and took a nap. I don’t know why I found this so amusing, but I decided that it merited a photo.

After those 30 minutes, I felt infinitely better and carried on my way (to a coffee shop across the street – see, you know I’m good if I’m drinking coffee!). But I resolved to be more mindful of my eating habits while traveling. It’s normal for me to go for long stretches of time without eating much when I’m running around doing awesome things, but I’m going to make a conscious effort to snack more often to keep my blood sugar stable so this doesn’t happen again. The last thing I need is to faint in front of the Pancake Man*!

To visit the Omelette Shop, enter the Old Town and walk straight past the clocktower. Continue walking straight and through the gate. The Omelet Man and his shop are just to the right.

*If there actually IS a pancake man, I need to meet him; perhaps even bear him my first-born. The only thing I like more than coffee is pancakes!