By on Asia Philippines Splurge

Ugh, you guys. I broke one of my own rules and spent a TON of money on a hotel in Cebu during my recent trip to the Philippines. Well, a ton at least compared to what I could have spent on a normal budget accommodation there; by NYC standards it was a steal at about $100/night.

I hardly ever get to stay in nice hotels, which is fine because I’d rather put my money toward other things (such as, you know, my student loan payments, or outdoor adventure activities). Priorities, ya dig?

But I came across this exceedingly cool boutique hotel when I was researching for my trip and just couldn’t get over it. Every single room at the Henry Hotel is different, each with its own hand-painted mural and unique take on industrial Euro-chic.

It’s like when I see something I think I love in a store, but I hold off on buying it just in case it’s an impulse purchase. If I find I’m still thinking about that thing several days later, I’ll go back and buy it and it’ll often end up being one of my favorite items ever.

I applied the same strategy toward this hotel stay: I kept fantasizing about staying at The Henry Hotel weeks after I discovered it, so finally I went ahead and booked it for two nights.

I’m sad to report that my stay at The Henry was extremely disappointing and not at all worth what I paid for it – partly because the hotel didn’t meet my expectations, but also due to other circumstances that had nothing to do with The Henry.


I Barely Had Enough Time To Enjoy It

I justified this splurge by reasoning that I’d be spending basically the entire two days in my room working on my laptop, editing photos, and kicking back in a comfy king size bed watching filipino tv. I mean, why not treat myself and make it so that I actually had an awesome environment to both live and work in?

Well, I ultimately ended up with about half of the time I’d anticipated thanks to losing a few hours on the first night due to my bus to Cebu getting stuck in major traffic, and losing half of the next day to the stupid effing English test I had to take for my Aussie visa application. Instead of balancing laptop time at the desk with tv/chill time in a comfy king bed, I spent all my waking in-room hours typing away at the desk (and *ahem*, badgering customer service about certain things – more on that later). I might as well have been sitting indian-style with my computer in bed in a $10 hotel room instead. 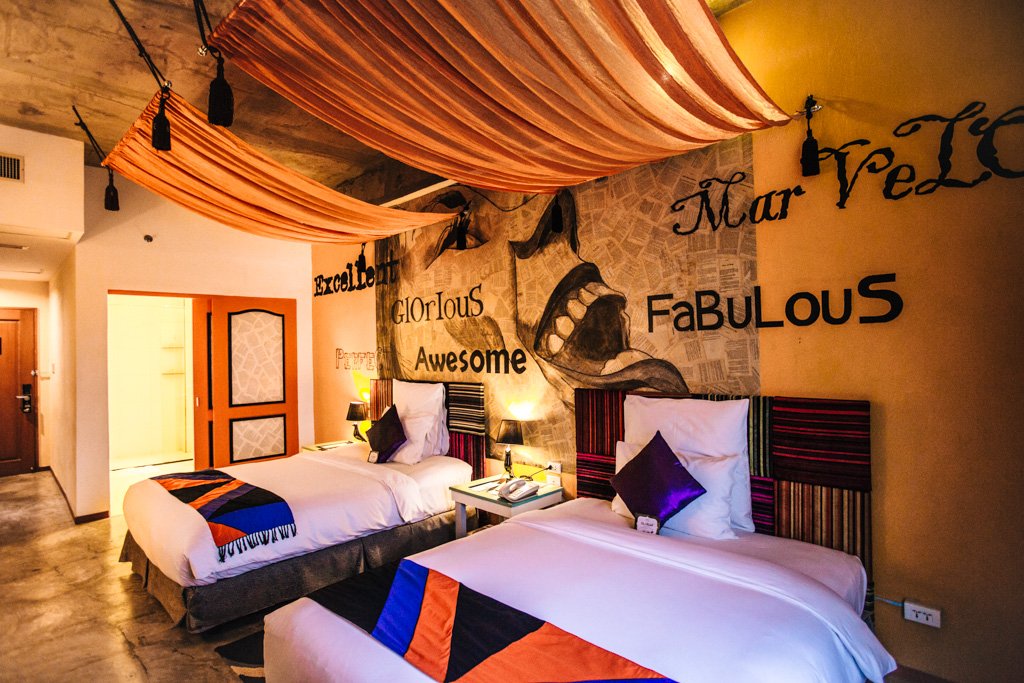 Two beds, less floor space, no couch, and positive affirmations on the wall masquerading as a mural? Uh what?

They Gave Me The Worst Room

Ok, so I didn’t have as much time to enjoy my room and the hotel as I anticipated. The sensible, optimistic side of me quickly took over and decided that I would make the most of what time I did have at The Henry.

This would have been a lot easier to do had my room been anything like I’d imagined and hoped.

The main reason I decided to splurge on two nights at this hotel was because of how awesome the rooms looked in the photos on their website. They offer 4 different room types: Big, Large, X-Large, and XX-Large. With colorful murals, exposed brick walls, a couch, and loads of space, even the smallest room option looked like a dream.

I’d booked a ‘Big’ room with one bed and specified in the notes that I’d prefer to stay in a particular room or one similar to it, and I included a link to a photo of one room I really liked from their website.

When the bellhop brought me up to my room, I was slightly disappointed to find that it looked nothing like the quirky rooms I’d seen and loved the look of on their website. I kind of hate myself for being so bugged by a perfectly lovely room, but see what’s what happens when you start spending more money. You expect more, and then you’re disappointed when you don’t get it.

And then it was my bad for not requesting a different room right then and there. Why didn’t I ask to see other rooms before agreeing to this one? I honestly didn’t even think to do this because I’m almost never in a position where I have that luxury. I’m so used to paying for the cheapest accommodation and simply using it as a place to crash that my expectations are usually minimal.

Whatever, I reasoned. I didn’t have time to be too bummed because I had to go out and forage for food and water and then prepare for my test the next morning. 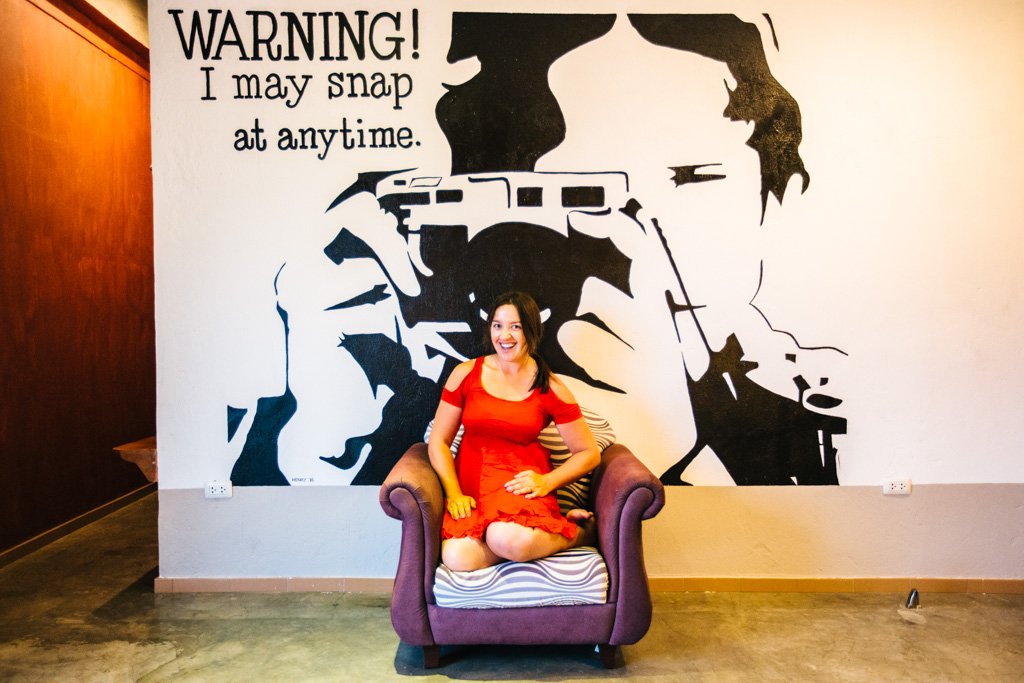 Their Customer Service Was Less Than Great

I woke up the next morning and grabbed some food at the breakfast buffet before heading off to take my test downtown.

Now, I remember having the option to add on breakfast to my booking when I made my reservation. I’m pretty sure that I rolled my eyes, thought “HA no thanks”, and declined. But when I checked in, the receptionist mentioned that my breakfast would be served in the restaurant adjacent to the lobby, so I then I thought that it was included. That’s the only reason why I opted for the hotel’s buffet breakfast that first morning. I’d have been fine walking across the street to grab some trail mix or something at the 7Eleven for 1/10 of the price.

So when I got served a bill after this mediocre meal, I was none too pleased. I tried to argue my way out of it, insisting that they had told me upon check in that breakfast was included for me. I think it was the way they had phrased it, framing it as if this was where I was definitely to have breakfast vs. this was where I could opt to order breakfast, that led to the miscommunication. I should have asked to clarify when I first checked in, but I feel like they also could have been a little more understanding and forgiving.

I returned late afternoon after my test to hunker down and Get Shit Done in my room. As the sun went down and the natural light inside faded, I went to turn on more lights only to realize that the room had no other lights aside from a few lamps scattered around. No overhead lighting at all. Determined not to make a fuss of it, I continued working and squinting at my computer screen.

Then I decided that it was stupid to strain my eyes like that and called down to the front desk to see if there were any other rooms with better lighting. They told me that all Big rooms just have lamps, while the larger rooms have overhead lighting. It sure would have been lovely if they had mentioned this on the hotel website so I’d have known that the Big rooms wouldn’t have been ideal for heavy computer-ing.

The front desk staff offered to send up another lamp to brighten up the room, but that wasn’t much help. Thoroughly exasperated, I asked if I could just upgrade to a ‘Large’ room with better lighting. Why of course I could! But no, they wouldn’t honor the price I found on Agoda for the same room which was $20 less than what they charged for me to upgrade. 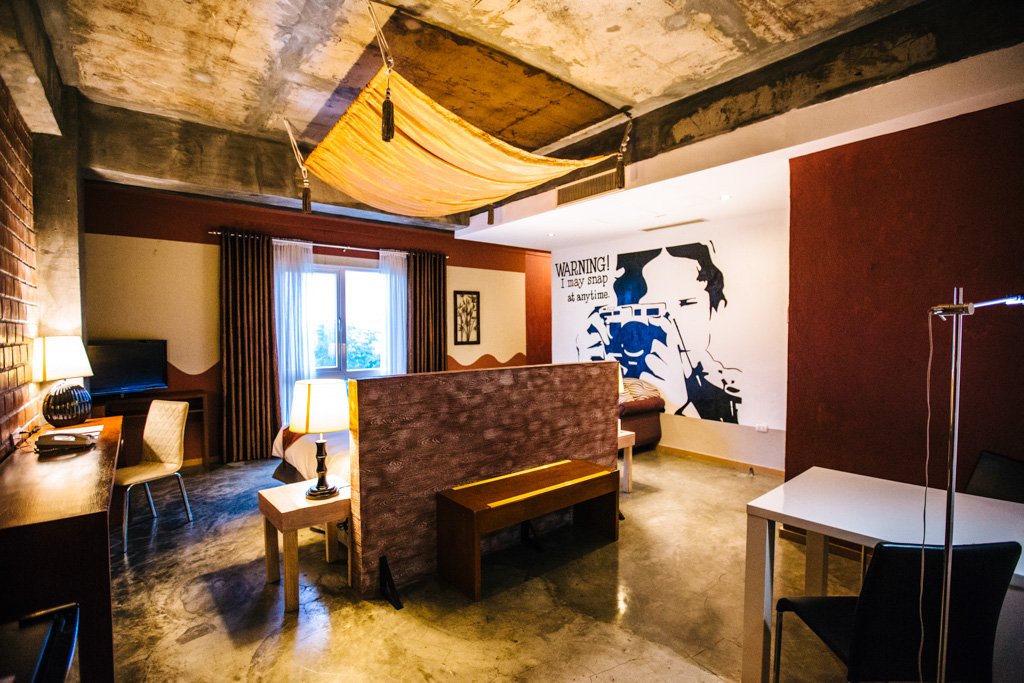 My new room – much better!

This time, I resolved to ask to see other rooms if the one they gave me wasn’t up to snuff. Luckily I didn’t need to because my new room was AMAZING and beautiful and everything I’d hoped my original room would be.

Well, except for the ceiling leak right by the TV which I somehow didn’t notice until a few minutes after the bellhop had left the room. I called back down to the front desk and they sent someone up who put a few bath towels down to cover the puddle and left without a word as the ceiling continued to drip rain water. No one ever came back to check on the leak or remove the soaking towels. That’s kind of shoddy service for a 4 star hotel, right?

I really did love my new room, though. I appreciated having the extra space and the table to set my laptop on, which sadly I did not move from until after midnight. And my new king size bed was crazy-comfy and spacious and perfect and… sadly I didn’t get to enjoy it until I collapsed into bed that night. 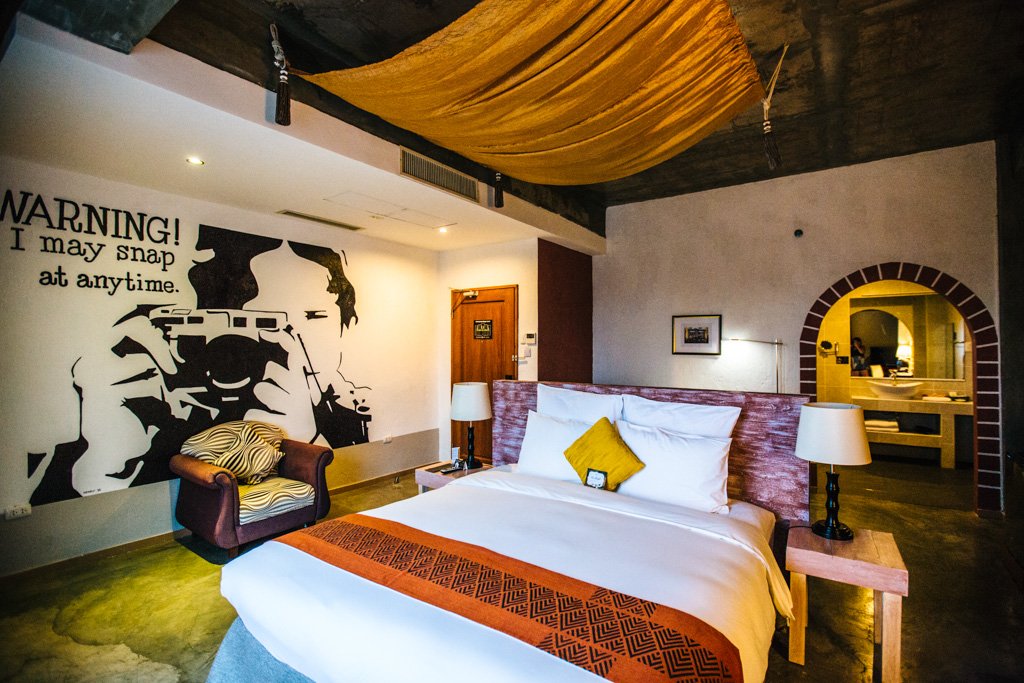 Final Thoughts on The Henry Hotel

I know I’ve said this before, but it bears repeating: I am not a fussy person. I pride myself on how easy I can adapt and make the most of most any situation I find myself in. Mostly it boils down to caring less (or not at all) about things that really don’t matter, and being ok with being uncomfortable.

I’ve slept in cockroach-infested rooms, dingy bungalows, and bus luggage stores with nary a complaint. When you spend hardly any money on such rustic accommodation, your expectations are already pretty low and sometimes all you can do is laugh when things go to crap.

But that all changes when you start spending a lot more money on a place to stay. I suddenly found myself expecting a lot more just because I’d spent a lot more. And when things didn’t quite go the way I envisioned, I felt like I wasn’t getting good value for my money and therefore felt mega-disappointed. More money, more expectations, more disappointments.

I don’t want to be the lavish spender who complains when she feels she doesn’t quite get everything she paid for. That’s not me, and it’s certainly not the kind of energy I want in my life. So I reckon I’ll think twice before booking a fancy hotel again* – or perhaps only splash out when I’m traveling with someone else (who can split the bill, commiserate with me if there are disappointments, and/or level me out). 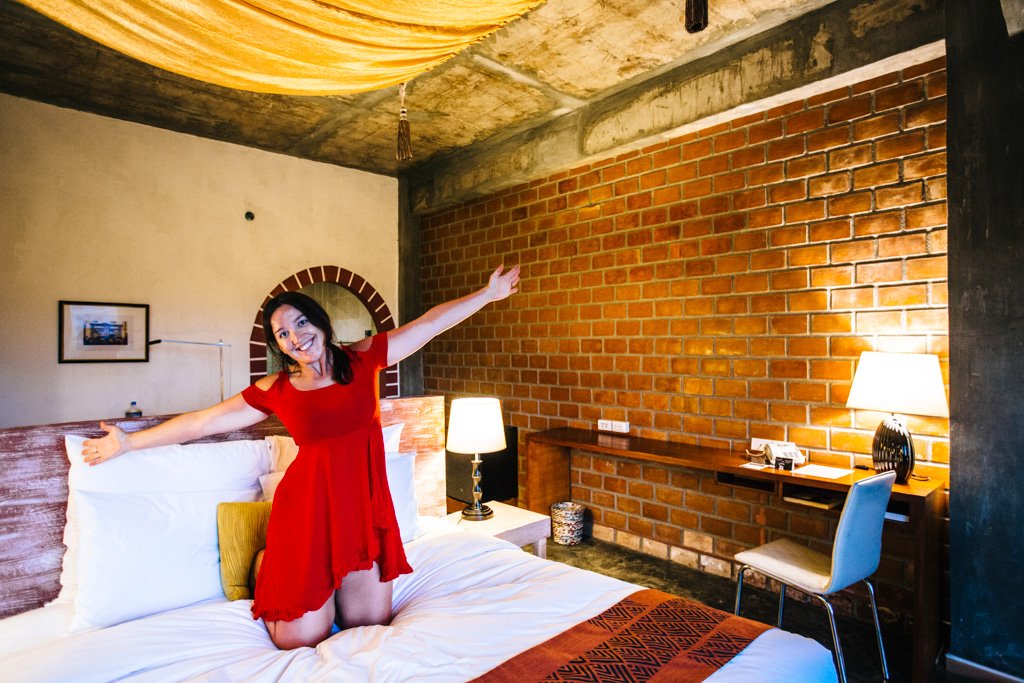 Loved the king bed and exposed brick in my new room!

So to sum up my stay at The Henry Hotel in Cebu:

Have you ever had a bad hotel experience? What kind of accommodation do you usually book for your travels?

* Ok, I may have booked a night at the St. Regis during my recent Hawaii trip… and 3 nights at the Grand Hyatt on my upcoming Mexico trip… but at least I’m not traveling solo this time!

Tags: CebuHenry HotelhotelSoutheast Asiasplurge
Previous Article2016 in Review: A Year As A Digital Nomad
Next Article The 25 Most Beautiful Places I Saw In 2016