I arrived in Greece last July with one very specific mission: to see as many beautiful beaches as possible.

Given that this country is famous for its stunning islands, this was very easily achievable. I spent 4 weeks on 4 different islands and towards the end had come down with a serious case of beach fatigue, which I didn’t know was even possible for a beach bum as serious as me.

Honestly I was so over beach hopping by the end that I very nearly didn’t even venture out on my very last day in the Greek islands. I was tired, my skin needed a break from all that sun, I had so much work to do – but then again, it was my LAST DAY here, and when would I have another chance to enjoy Greece?

In the end, I resolved to spend half a day checking out some of the smaller, less-flashy beaches near where I was staying (which was near Lixouri, one of the main towns on the island of Kefalonia). 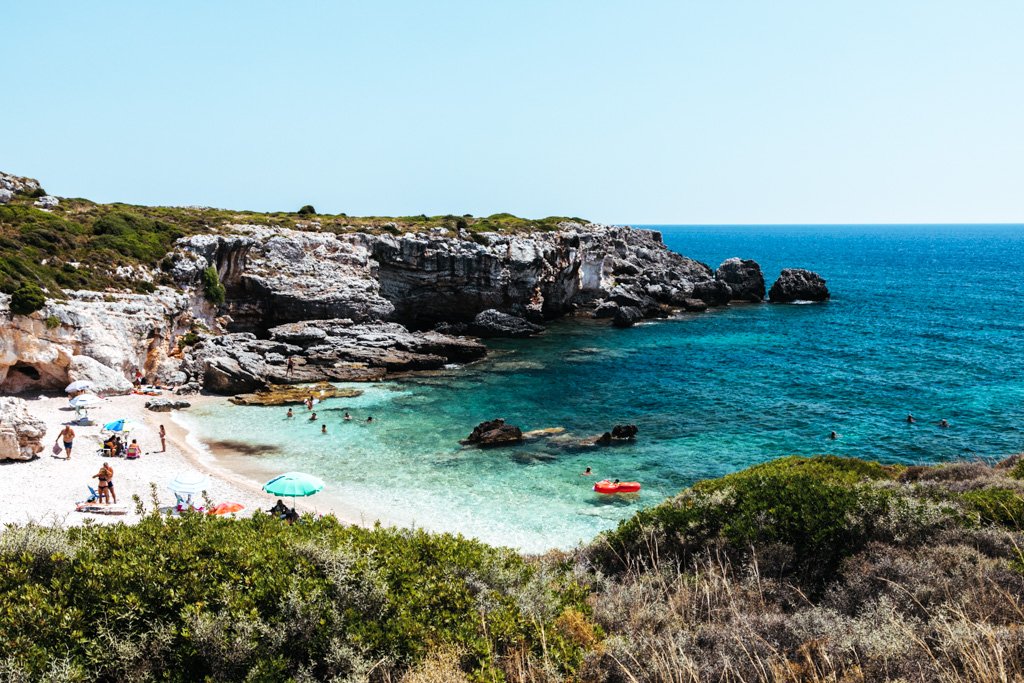 First, Google Maps had me needlessly driving down a bumpy dirt path to Lagadokia Beach, even though I could clearly see a perfectly good road leading there from the other side. I still can’t believe I didn’t pop a tire on my rental car from that drive.

Lagadokia is actually a pair of neighboring coves with neither facilities nor tourists. It was undoubtedly the quietest beach I visited on Kefalonia, only occupied by a handful of locals when I was there. It was pretty enough, and yet… I still wasn’t feeling it. So I snapped a few obligatory photos and hit the (bumpy and slightly perilous) road again. 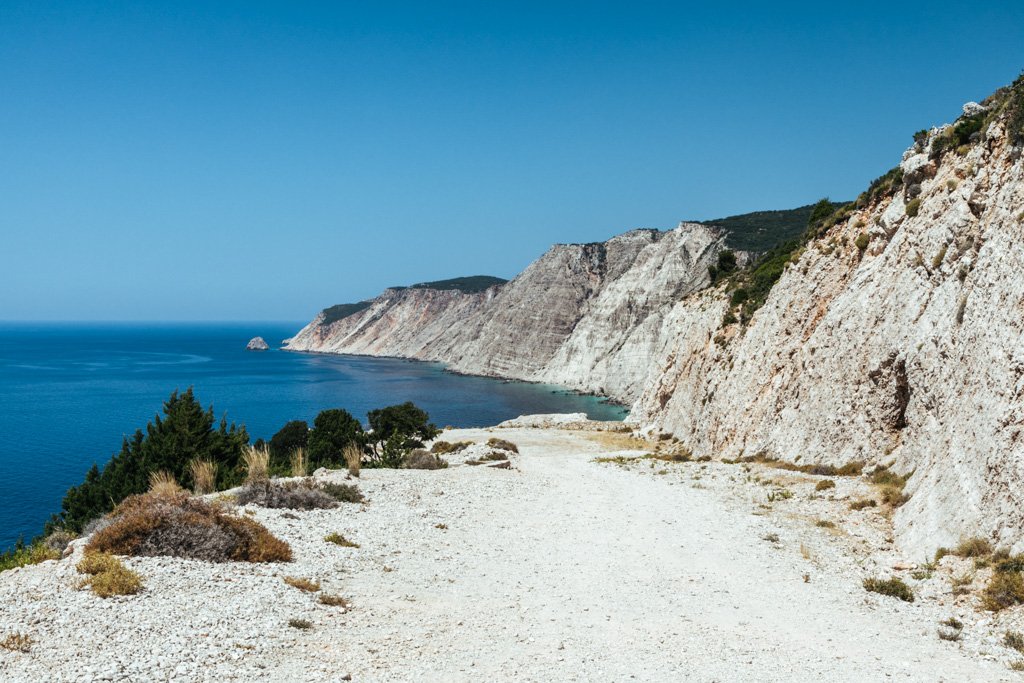 From there, I decided to head to Platia Ammos, a beach that looked absolutely stunning from photos but was no longer accessible due to damage to the (formerly 300) stairs leading down to the beach during the 2014 earthquake. All the reviews and blogs I’d seen insisted that the beach could only be reached by boat now, so I figured I could at least drive up to the old parking lot and take in the view from there.

The drive along the coast as I approached the beach was IN. SANE. Like, insert-a-dozen-mind-blown-emojis-here insane.

And then things got a wee bit dodgy when the road turned to gravel and I was suddenly swerving around potholes while driving downhill in my little sedan. I careened past a small pull-off where a car was parked, but realized a little too late that maybe I should have parked there and walked down to the parking lot. Ah well – a little pothole party never killed anyone, right?

Mercifully I made it to the end of the road with the car in tact. I dare say it was worth the sweat, wouldn’t you? 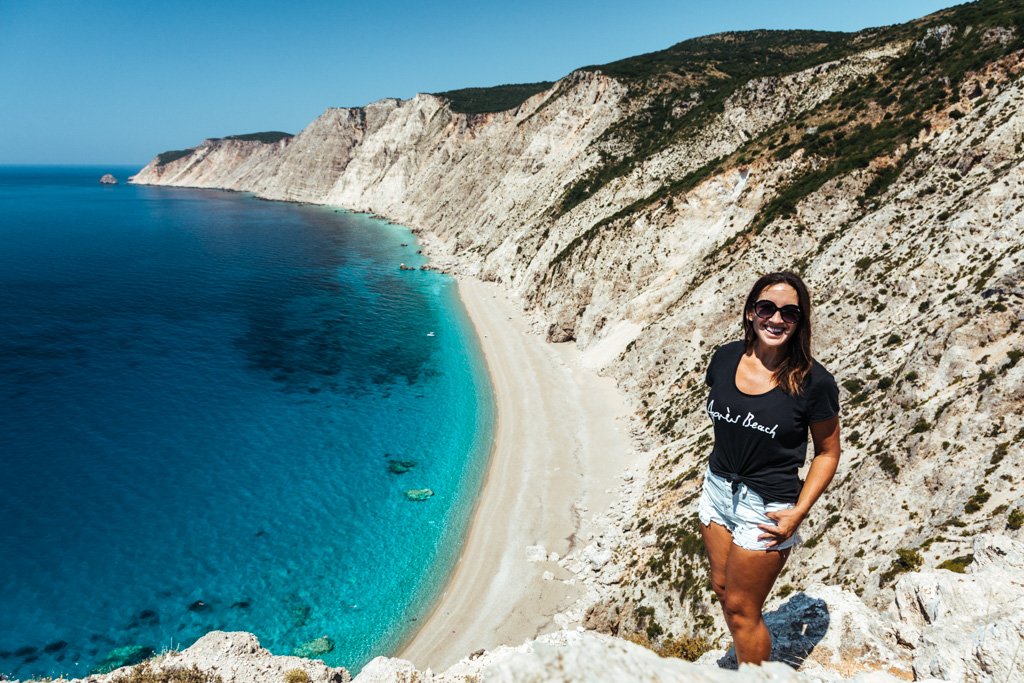 I stood here drooling for an inordinate amount of time, absolutely floored at that fact that the gorgeous beach I was looking down at was completely empty, save for a family of 4. How did they get there if there was no boat anchored anywhere near the beach, I wondered.

Then I thought I’d start walking down the stairs to the beach just to see what the damage looked like. Within a couple minutes, the stairs abruptly end and all that’s left is a steep gravel/dirt hill leading down to the sea. I surveyed the landscape and noticed what looked like a lightly trodden path on the side, right along a rock face. If I could inch my way down, hugging the rock for support, it might be doable…

Only problem? I was wearing flip flops because I hadn’t planned to be hiking. And I definitely hadn’t anticipated a slip ’n slide adventure down to a beach that every other source had deemed inaccessible. 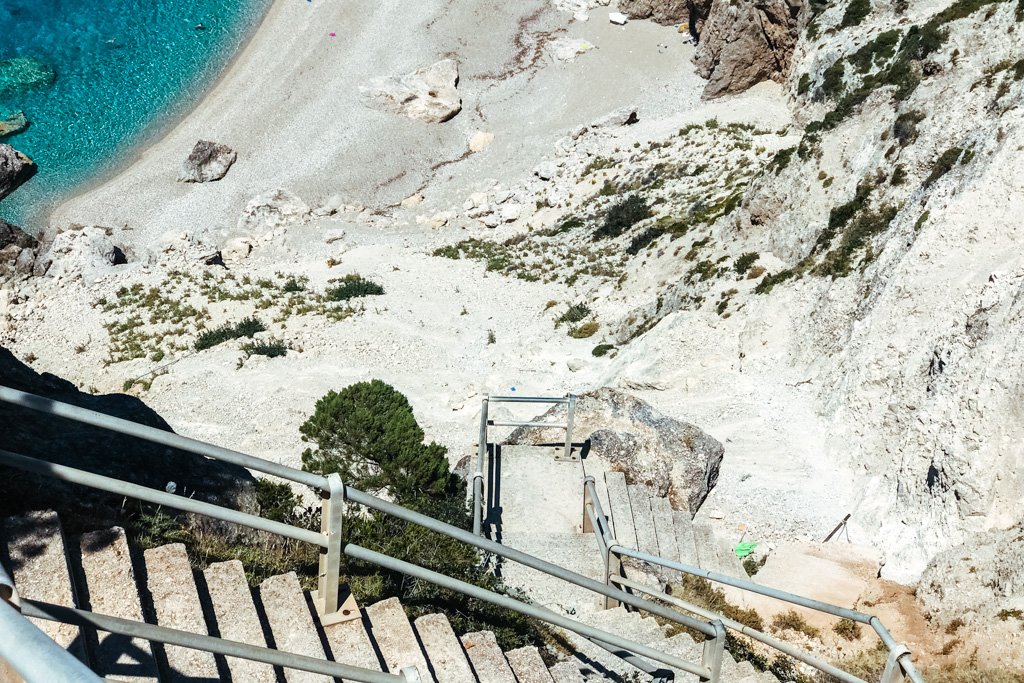 I swear, I stood on the bottom stair debating whether or not to hike down for AGES. It was internal struggle city over here. All signs pointed to it being a colossally STUPID idea: the fact that I was alone, ill-equipped, without much water, wearing sandals, and sans phone signal. And yet… I just couldn’t walk away. I was a moth, and that beach was my flame. 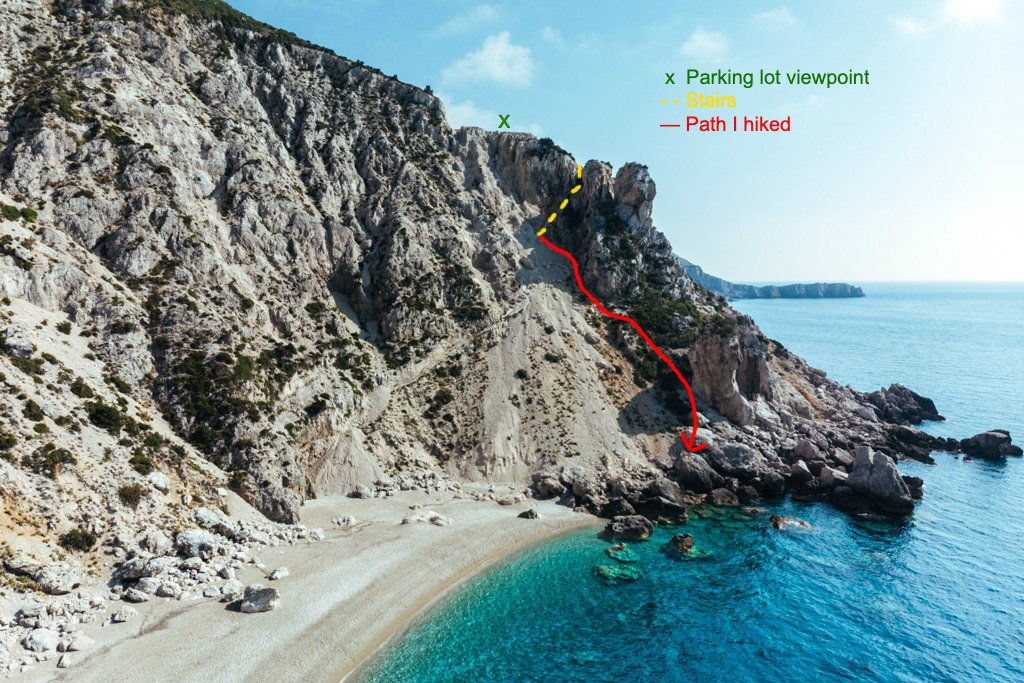 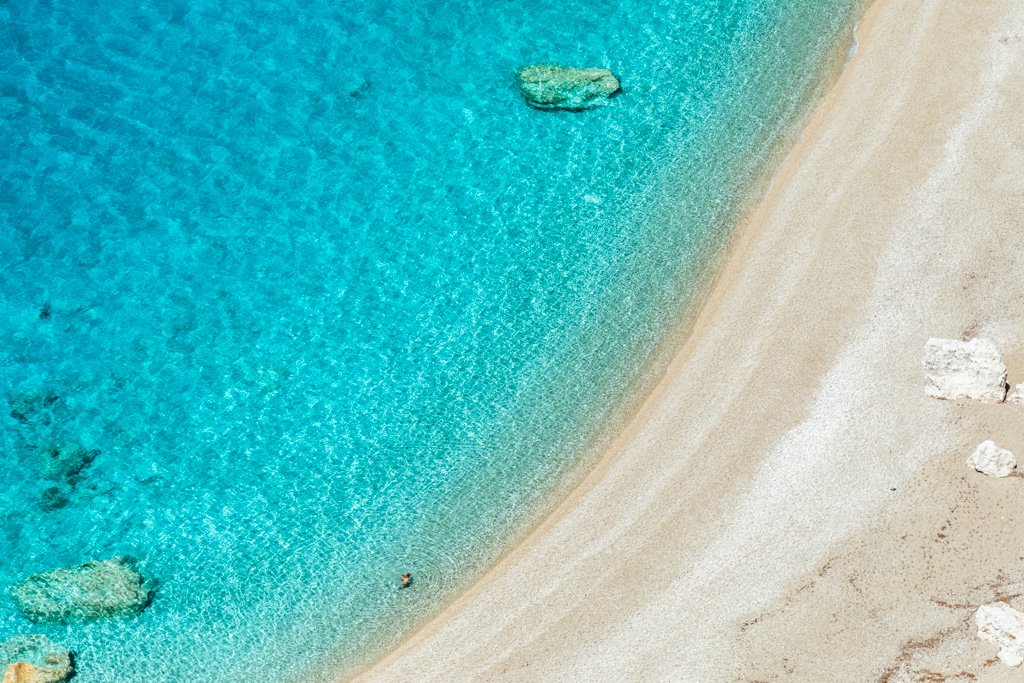 Ok, well obviously as I am here to recount the tale, I did in fact survive the adrenaline-fueled hike down and back up the steep, slippery slope in my flip flops. It was definitely one of the dumbest/most reckless things I’ve ever done, and I’m very fortunate that I made it without incident.

I honestly think my rock climbing experience is what saved my ass from careening downhill. I instinctively relied on the rocks for support the entire way and sometimes even used them to pull or push myself along the path when I knew I couldn’t put much weight on my tractionless feet. I stayed very close to the rock wall and the ground the whole time and also aimed to step on anything secure on the ground, like buried rock or roots.

And of course, I did that thing I usually do where I remind myself that I’m strong and clever and can handle everything that’s thrown at me, and that helped psych me up for the terrifying climb down. And then as I was doing it, I stayed super focused on the task at hand and just wouldn’t allow myself to think about the potential consequences, or the fact that I’d have to come back up the same way later. Mindset is everything, y’all.

IMPORTANT NOTE: I DO NOT recommend you attempt to hike down to Platia Ammos beach if you’re not a fit, experienced hiker. If you scare easily or are prone to anxiety, this is not for you either. And DEFINITELY make sure you’re wearing proper hiking shoes and have lots of water on you. 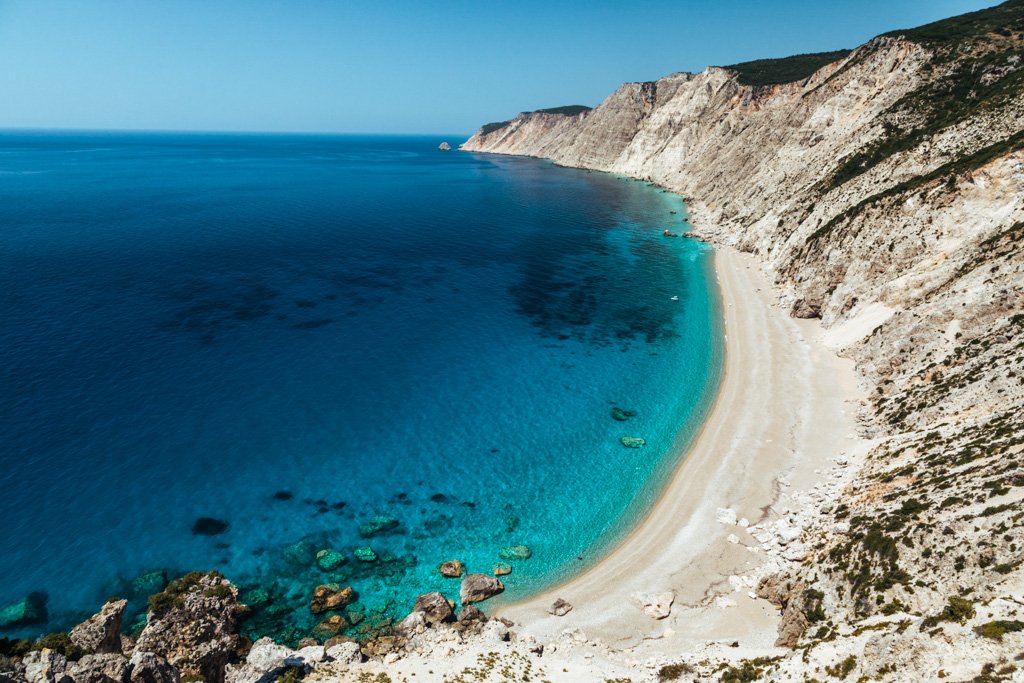 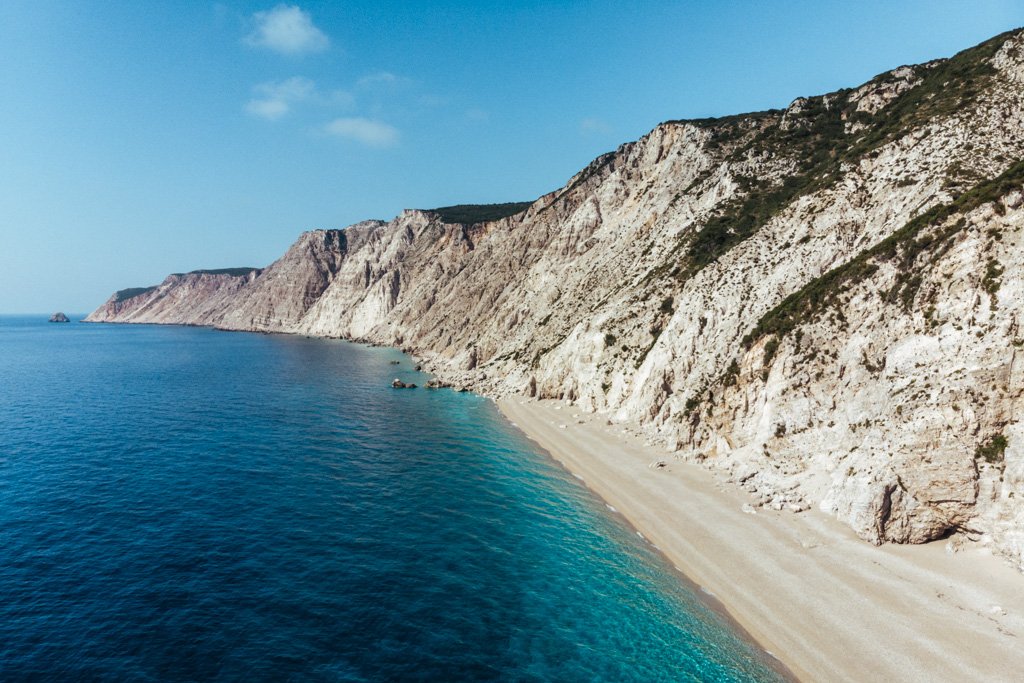 Once I finally touched down on the beach, it took a minute for me to register the fact that I’d just gone and done this crazy thing and succeeded at it. I was momentarily distracted by the scorching hot and wildly uncomfortable rocks that seemed to take the place of sand on this beach. I quickly trudged past the family and parked myself just beyond where they were camped out. In front of me, the rest of the beach was completely empty.

I don’t know if it was the high of the adventure I’d experienced just to get there, or the thrill of having this ridiculously gorgeous beach pretty much to myself, but I swear the sea has never felt so good on my skin. The hour I spent here swimming and sunbathing was pure BLISS. 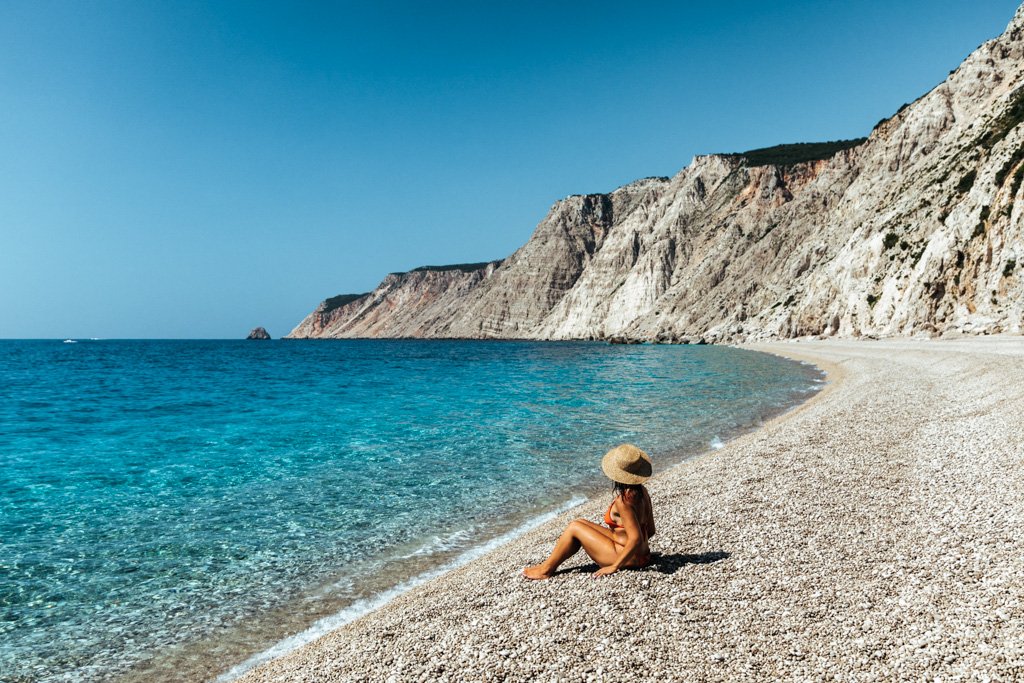 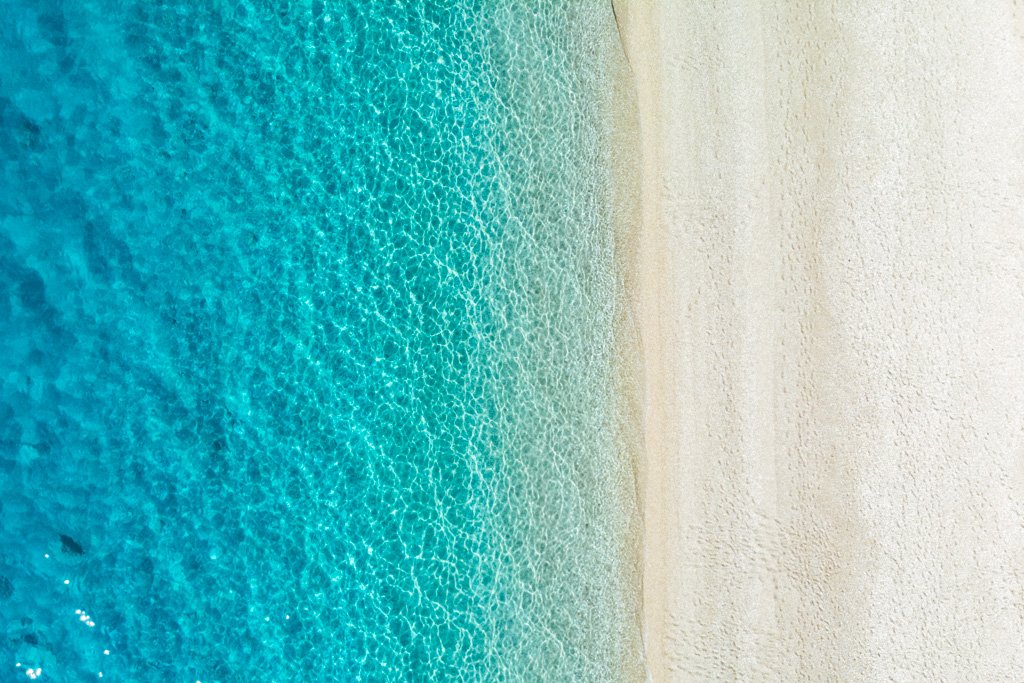 Oh and I took Droney out for a little flight since it wasn’t at all windy or crowded, the first one since he ran away from me in Crete. And it was absolutely fine! No incidents, just a handful of killer shots of that crystal clear water.

I was so tempted to stick around for a couple more hours, but I was a wee bit worried about getting myself back up and out of there and wanted to allow for extra time before it got dark in case there were any issues. I honestly don’t know what I would have done though, since I didn’t have any phone signal on or anywhere around the beach, so um… thank goodness I didn’t hurt myself climbing out, or get stuck in any potholes driving back to the main road.

But man, what a way to end my month in Greece! Go figure that the very last beach I visited turned out to be the best one.