Have you ever visited somewhere kind of offbeat and completely awesome on your travels that you never would have known about had it not been for a tip you were given by a local or fellow traveler? I can think of a few gems off the top of my head that other people personally recommended to me that totally made my day:

And most recently: Denmark Animal Farm & Pentland Alpaca Stud. While chatting about my Southwest Australia roadtrip, a Tinder match I never ended up meeting told me about a native animal farm where you can play with baby kangaroos and alpacas and pet koalas without paying $20 for the privilege (like I did on Magnetic Island, woof!). I could have gone either way on it, but Anna was totally jazzed. When we hit some crappy weather that rained out our ambitious plans of beach hopping on the southwest coast, it seemed like the perfect opportunity to check this animal farm out.

We arrived completely deflated, bummed about the rain, annoyed about all the driving we’d done for seemingly nothing – and then we met the animals that turned our literal frowns upside-down. 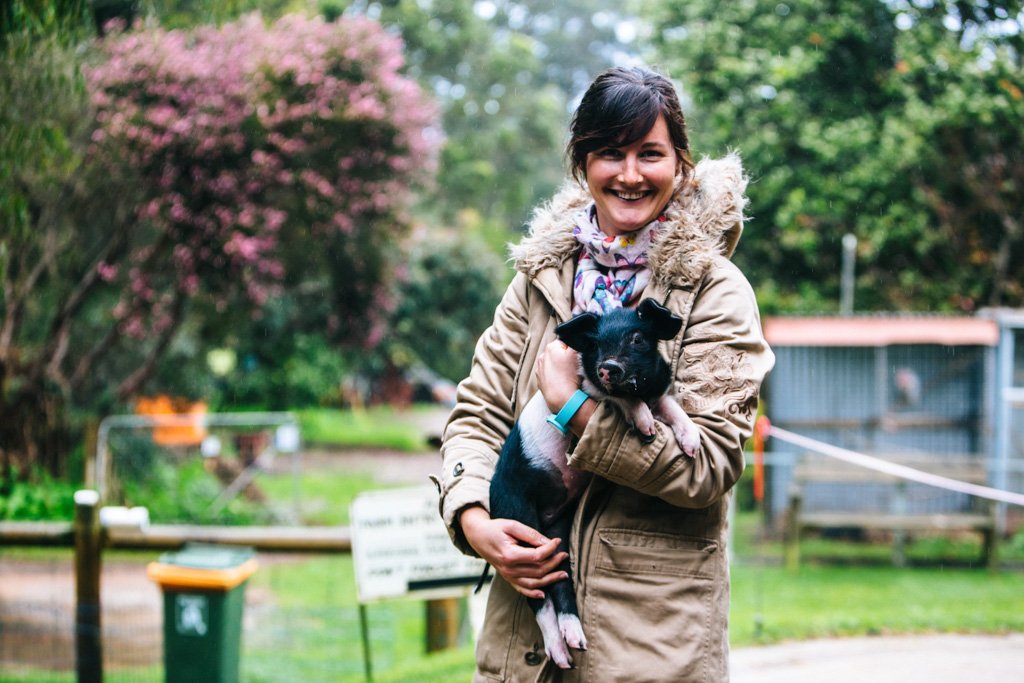 We stepped inside to pay for admission and found a pig on the loose. Anna scooped Beryl right up, much to his snort-laden dismay. “Quick, take my picture!” she requested, mid-laughter 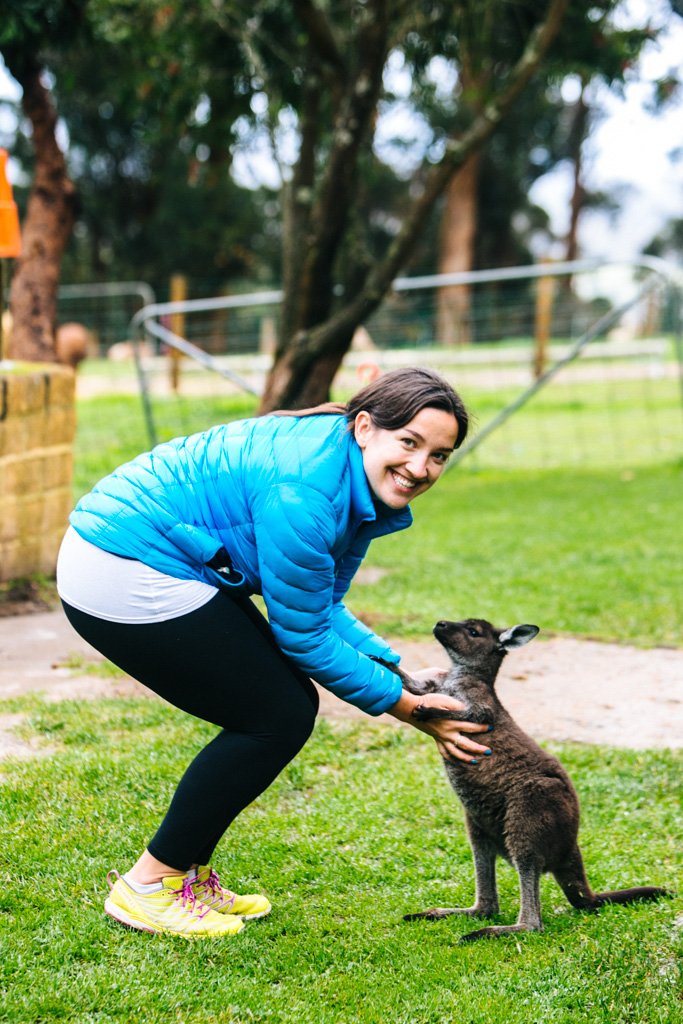 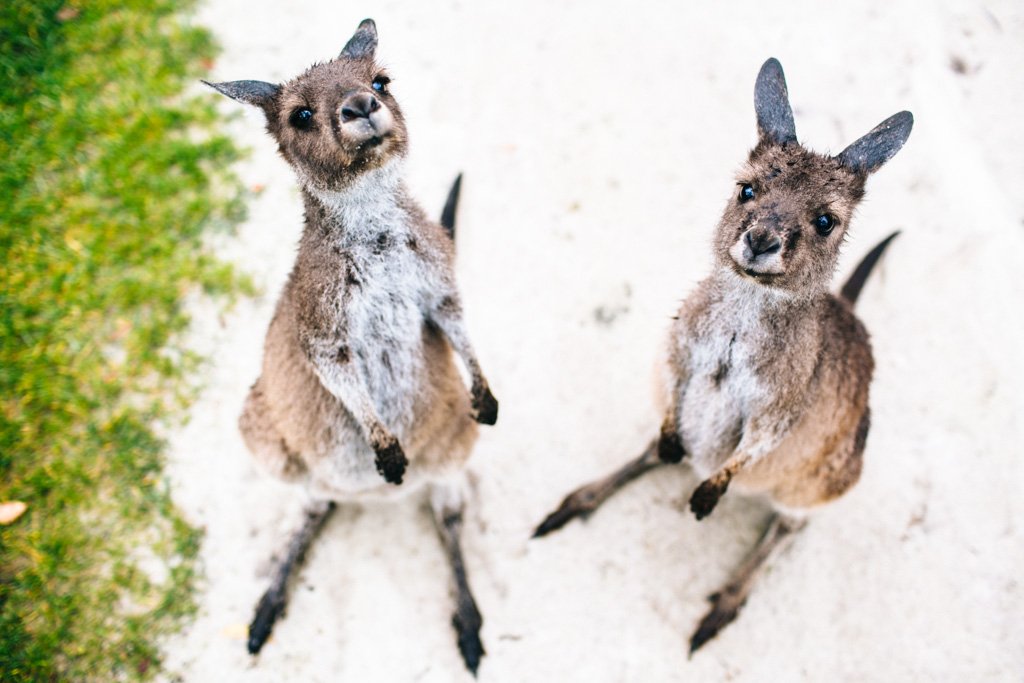 The Denmark Animal Farm & Pentland Alpaca Stud is a family-owned business with WWOOF and HelpX volunteers that help run it. It’s not a zoo; if anything, it’s more akin to an immersive farm. Visitors are encouraged to roam the grounds and get up close to the animals.

So pellet bags in hand, we stepped out to meet the ani-family. I had my eye on a couple of joeys that were lingering along the path and cautiously approached to see if they wanted a feed. To my complete surprise, they didn’t run away – and when I held out my hand, one came over and ate the food right out of it. The other joey followed suit and placed his paw right in my empty hand. Seconds later, I was holding hands with two kangaroos. “OH MY GOD THIS IS SO COOL!” I squealed over and over, swaying to the imaginary music in complete awe that the ‘roos didn’t break contact with me. Never in my wildest Aussie dreams did I imagine myself dancing with kangaroos! It made me THE HAPPIEST. 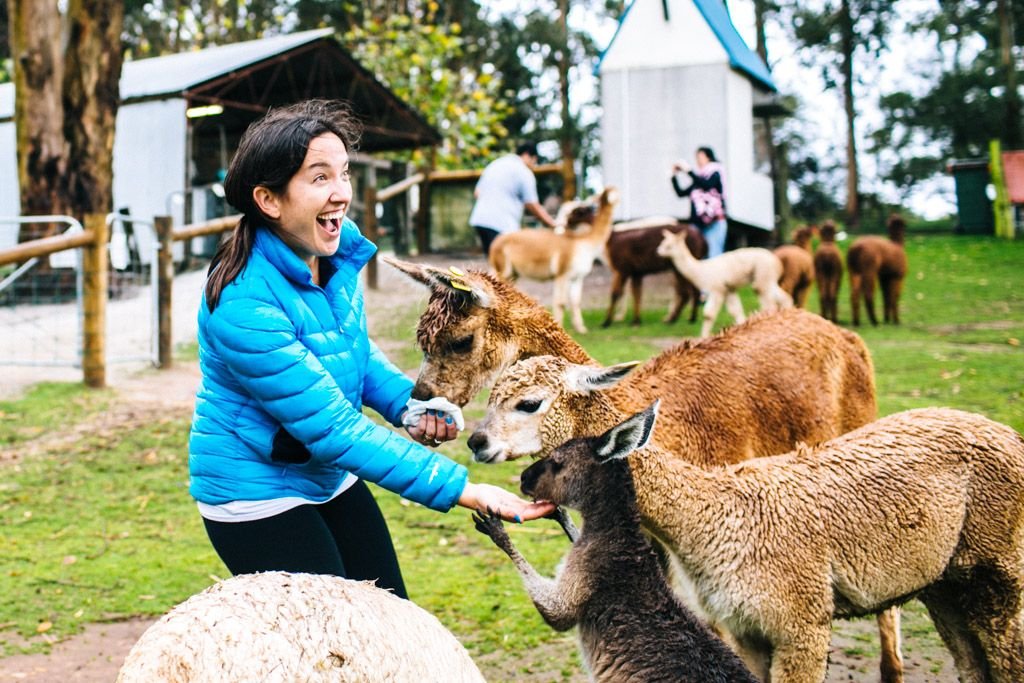 I could have easily sashayed with the joeys all afternoon, but the alpacas beckoned in a nearby pen. We let ourselves in and watched the soggy alpacas flock to us. Since it had been raining all morning, all the outdoor animals were pretty wet – but the alpacas looked the most pathetic with all their wool flattened. They still managed to win us over with their cuteness, though. I mean LOOK AT THIS RIDICULOUS FACE! 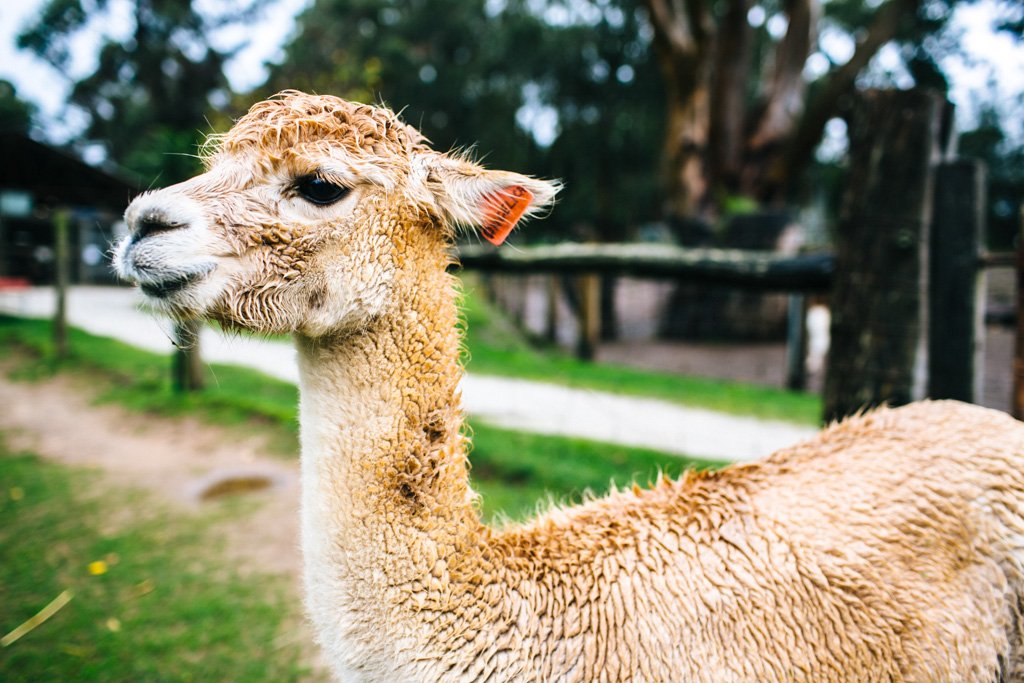 It’s one thing to have two small kangaroos approach you; it’s *slightly* more daunting to have a flock of eye-height alpacas mosey on over to you and bob their heads for food. Alpaca heads, all up in my grill! 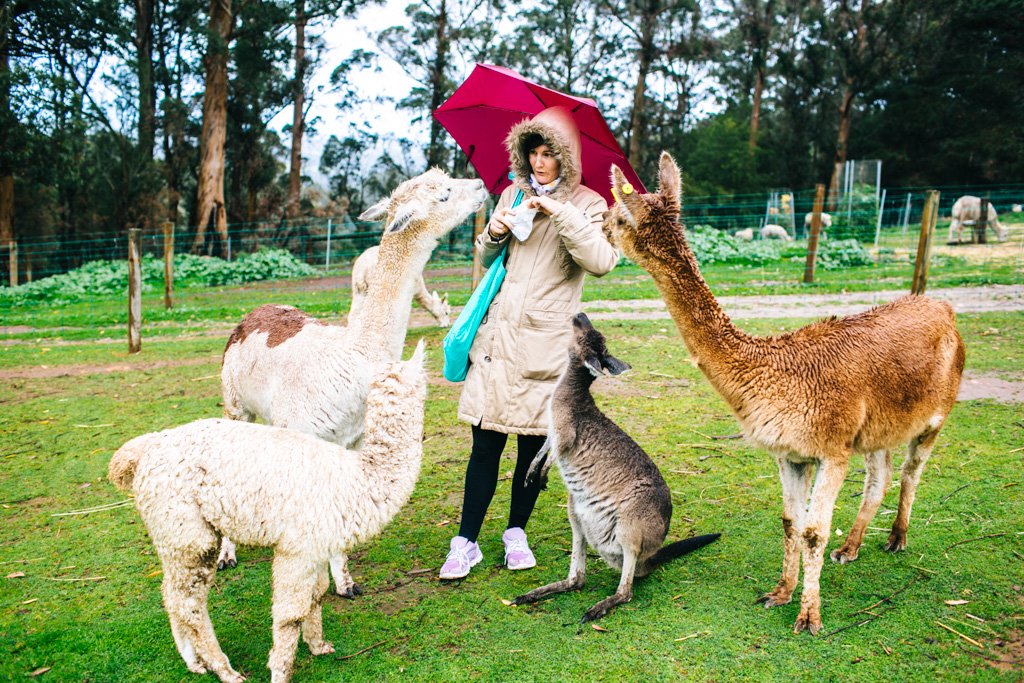 How do you top spending such quality time with kangaroos and alpacas? We carried on exploring the farm thinking we’d already seen the best, blasted past a chicken coop, and sat ourselves down in a goat pen. No really, we literally sat our asses down in a pen of sheep and goats. I cuddled with an exceptionally soft lamb, while Anna got attacked by the goats. Goat selfies were taken, goat poop was sat in, goat drool was transmitted – and I just cackled through the show. 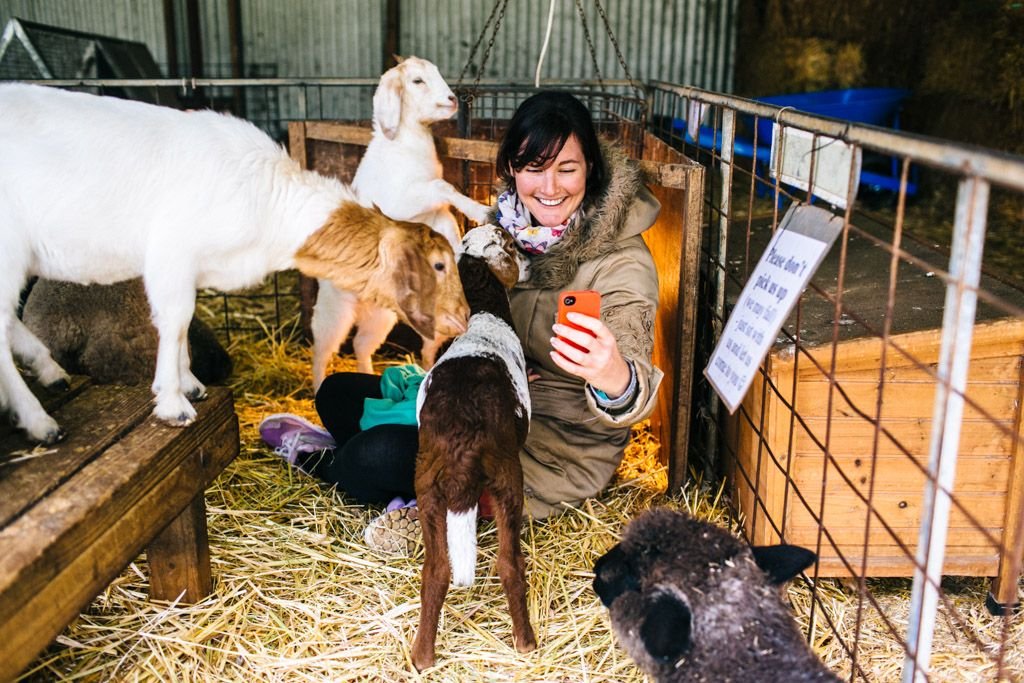 Just behind the goat pen a massive camel loomed, anticipating his next feed. It sure didn’t come from me, I can tell you that much. Would you let this big slobbery mug get that close to you? 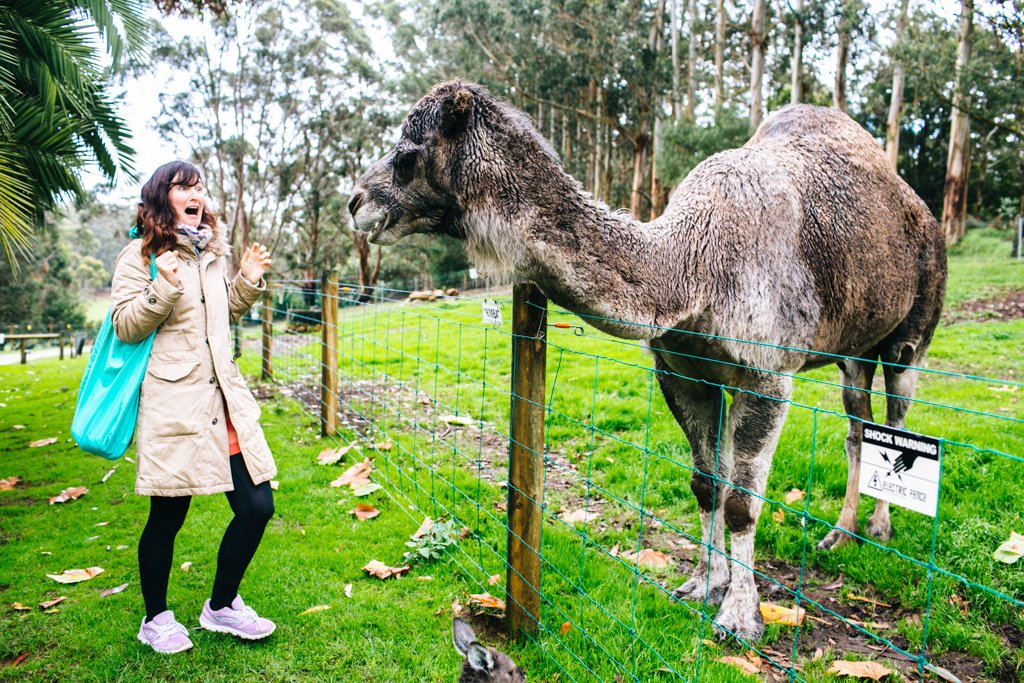 I almost missed the walk-in rabbit cage with all the other animal-related excitement distracting me. The bunnies were way too squirmy to be held for long, so instead we mostly just pet their oh-so-soft fur while they cautiously sat in close enough proximity. Meanwhile, chirping guinea pigs nestled beneath the hay on the ground and huddled together underneath the benches we were sitting on. 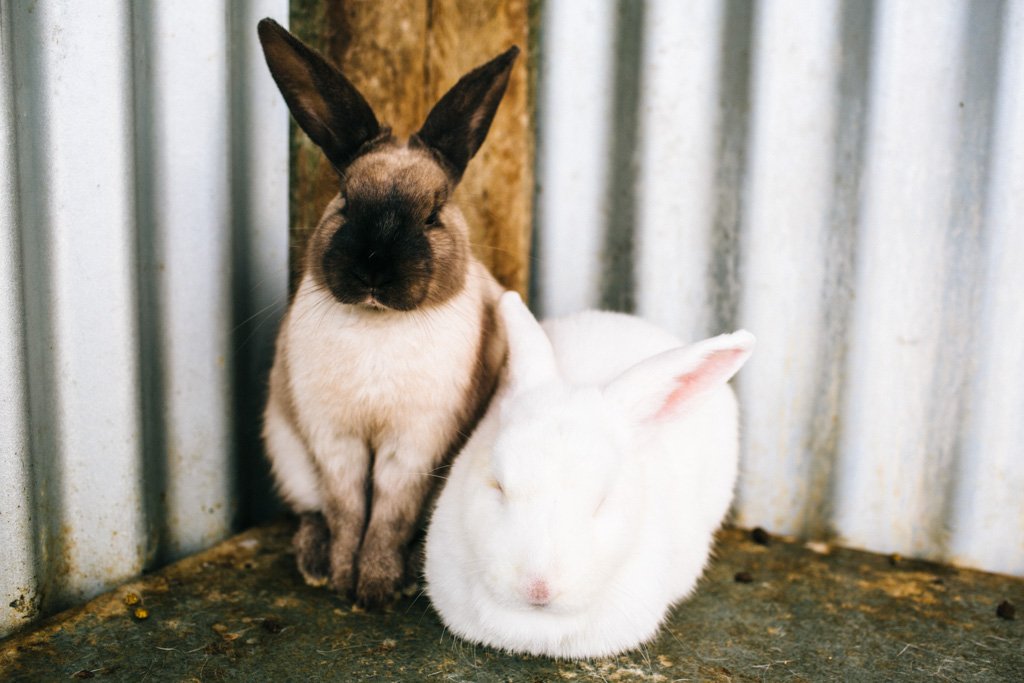 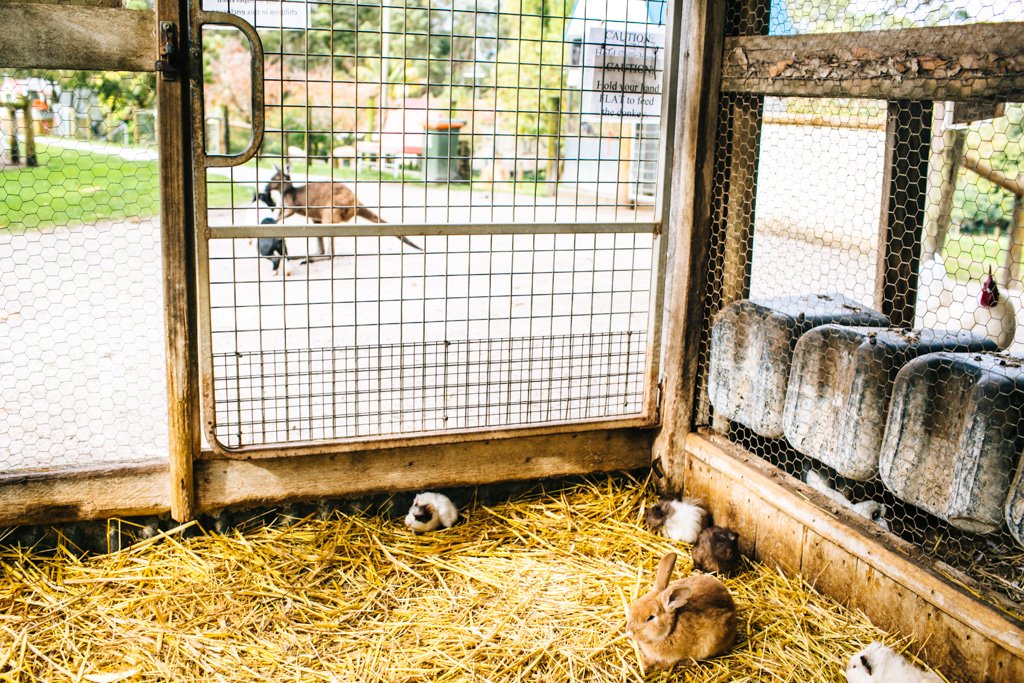 For the grand finale, we requested some time to pet the koalas, Clancy and James. As expected, they mostly just slept while grasping a tree branch. No complaints here, though – I was just happy to have unlimited private time with these cuties. And bonus: we didn’t have to pay to take pictures with them! 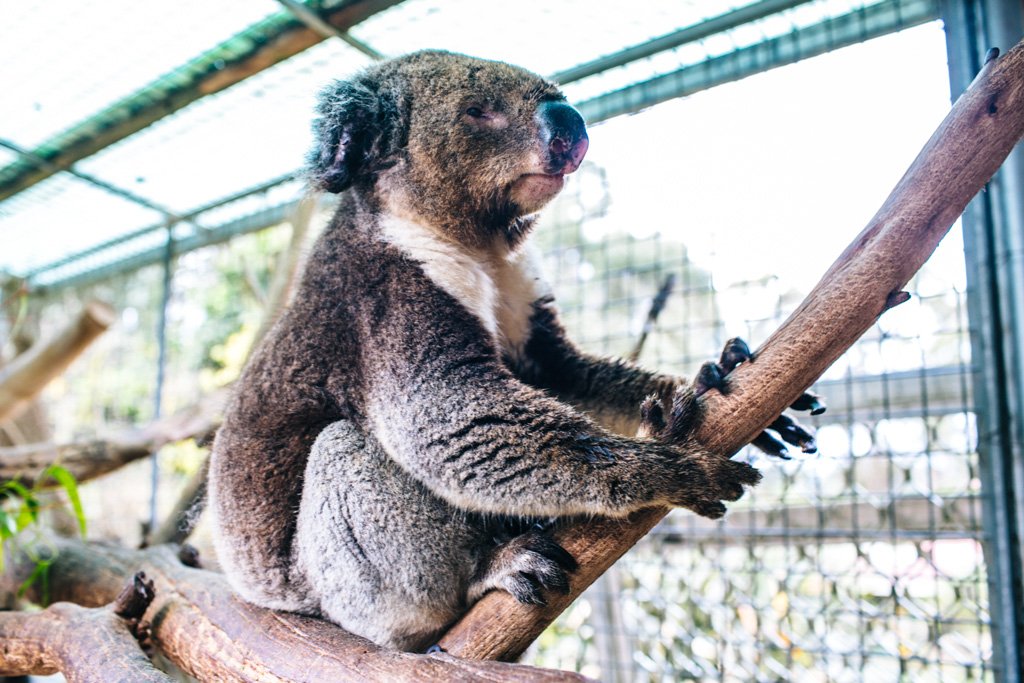 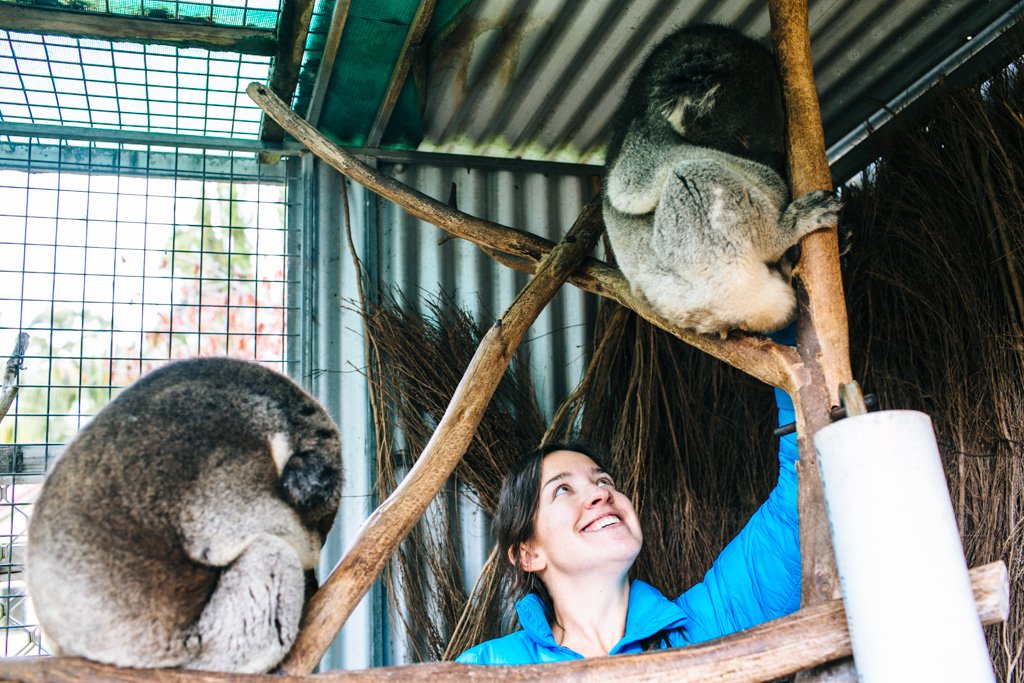 As of July 2015 —
Admission to the Denmark Animal Farm & Pentland Alpaca Stud is AU$14 per adult.

Tags: AustraliaDenmark Animal FarmSouthwest AustraliaWestern Australia
Previous ArticleEscaping Sydney for the Kangaroo Valley Countryside
Next Article Things To Do In Queens, New York Off The 7 Train