Even paradise has its downfalls, my friends. Australia is my ultimate happy place, but believe me: there is plenty to complain about here.

Below are what I consider to be the worst things about Australia. I give you this list not to dissuade you from visiting or relocating to Australia, but to inform you before making your way Down Under so you can be mentally prepared for some possible disappointments. (I promise you, it’s still very worth traveling to Australia despite these!) Hello, Captain Obvious! Yes, Australia is agonizingly far away from most everywhere in the world.

Unless you’re visiting from New Zealand, you’re looking at at least one long haul flight to the land Down Under; likely more if you’re coming from the Americas or Europe. From Australia’s east coast, it takes a minimum of 6.5 hours to reach Asia (Bali) and 13-15 hours to reach Africa and the west coast of North & South America. 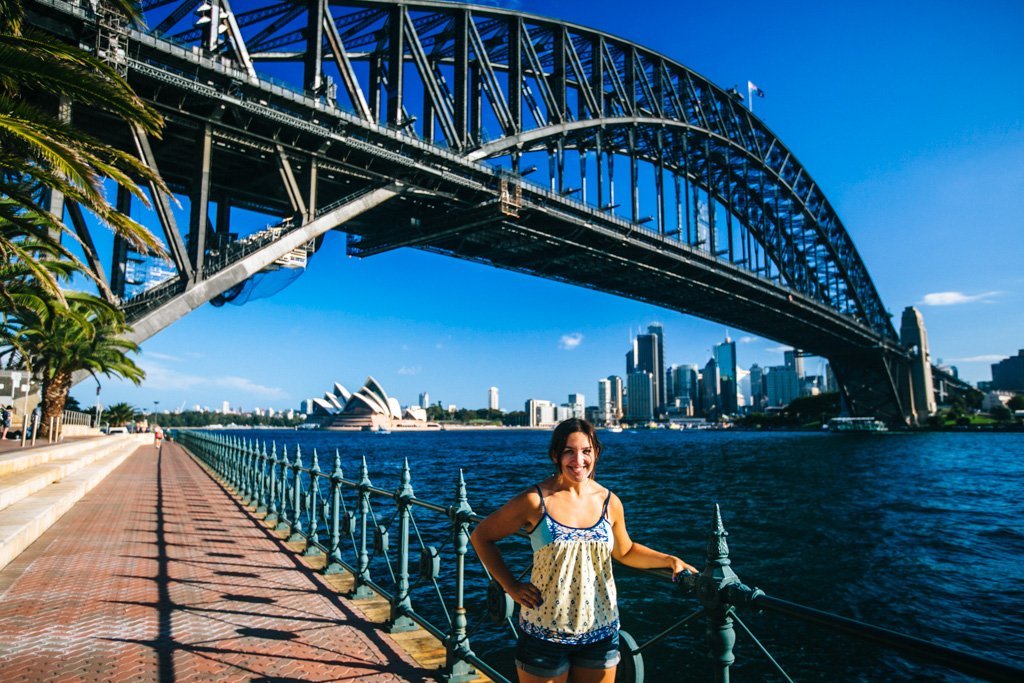 It’s all worth it to be HERE!

Yes, it’s true: Australia is relatively expensive compared to other nations. Sydney and Melbourne currently rank as the 5th and 6th most expensive cities in the world (above Copenhagen, which I found to be cripplingly expensive when I visited 6 years ago).

I recently wrote a post about how to travel cheaply in Australia and I stand by my point that there are great deals to be had if you’re frugal. However, there’s just no getting around the exorbitant prices of some things in this country.

The cost of renting in Australia is 36% higher on average than it is in the US. I think this is because most people want to live in the bigger cities here, and there really aren’t that many big cities (population >1 million) in Australia as compared to in the US. It’s simple supply and demand logic, really. Personally, I’ve found Melbourne housing to be relatively cheap, and Sydney housing to be very expensive and often poor value.

Consumer goods tend to be more expensive in Australia largely due to its geographic distance. Consider the added cost in moving goods to and around this faraway, spread-apart land and it starts to make a little more sense. 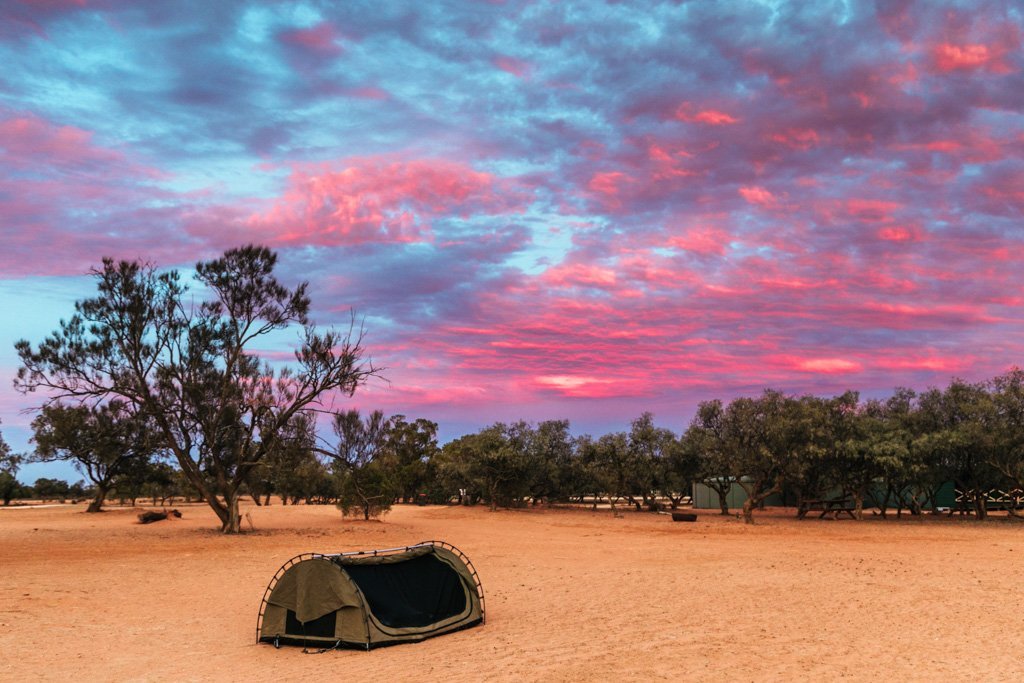 Cosmetics tend to be expensive, even the basic drugstore brands. My go-to cheap tube of Maybelline mascara would cost me US$6 back in the US (and I nearly always snagged it on a buy-one-get-one-half-off sale, so really it would cost me $4.50). In Australia, this same mascara costs about AU$20 (US$15).

So far I’ve been able to avoid the price hike by stockpiling cosmetics and moving to Australia with several of my makeup staples, wearing less makeup in general, and having my awesome friend Nicki pick up a few things for me in NYC and deliver them when she came to visit me in Melbourne last year.

Alcoholic drinks in Australia are also shockingly pricey. I’m not too affected by this since I rarely drink, and when I do it’s almost exclusively wine (which is actually cheaper in Australia, especially during happy hour). But if beer or liquor are your drinks of choice, expect to pay out the ass for them. I’ve found cocktails in Australia to be about the same price as they are in Manhattan, which is ludicrously high.

Lastly, don’t buy electronics in Australia if you can help it. The prices of laptops, software, and other tech gadgets are crazy-inflated here.

I don’t think anything can quite prepare you for the shock of the terrible internet in Australia. I’ve had faster internet connections in third world countries in Asia, and unfortunately that’s not hyperbole.

It’s a combination of the former prime minister axing plans to build the NBN (National Broadband Network) and the mass amount of resources needed to cover such a big (and, away from the coasts, very sparsely populated) country that has Australia lagging years behind other well-connected nations. 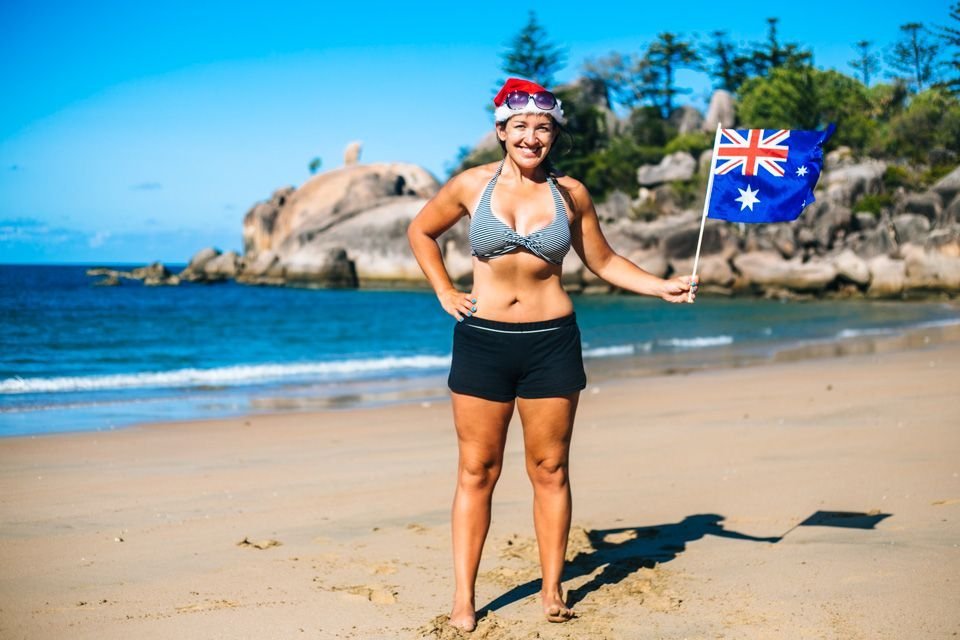 That time I celebrated Christmas on Magnetic Island.

Christmas is Too Low Key

I come from a place where Christmas is revered for nearly a full month, and a family that always went all-out in decorating the house, baking copious Christmas cookies, and blasting Christmas tunes every day leading up to the holiday. Yep, December is a downright magical time of year in New York and New England.

But while much of the northern hemisphere enjoys a lengthy Christmas season, Australia celebrates just the one day. Sure, there are a few Christmas displays around the major cities and there are some people here that do put effort into decorating their homes and yards, but in general Christmas is very low key in Australia. It’s not uncommon to hit the beach with your family and have a barbecue on Christmas here.

If you’re from the northern hemisphere, it’ll be an adjustment celebrating Christmas in the summer. All those timeless Christmas songs about winter wonderlands, snow, and open fires have no place here when it’s 90+ degrees and you’re nursing a sunburn. 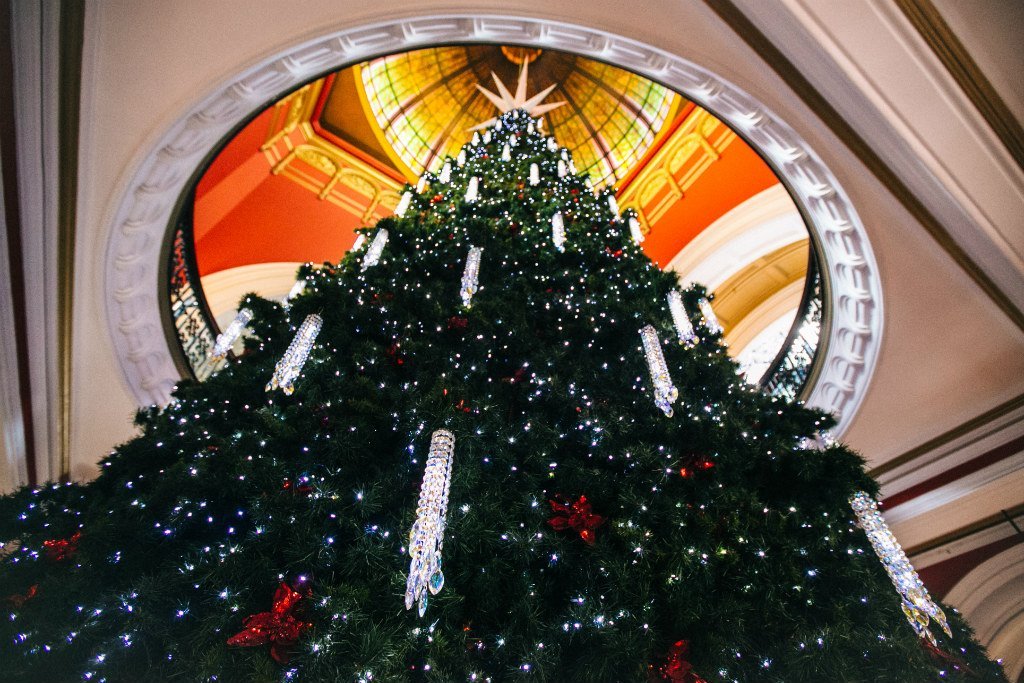 The Aussies have a reputation for drinking frequently and copiously. I came face-to-face with this shortly after moving to Australia when a couple of guys I went out with kept ordering drink after drink on our dates while I nursed one glass of house wine. At first I wondered: am I boring them? Do they have a drinking problem? What is going on here?!

Since then, I’ve come to learn that drinking is deeply embedded in Australian culture. They tend to start young and practice often: after work, at any social gathering, at Sunday Sessions, and for literally anything that could possibly be construed as a special event. For many, downing 5 beers in one sitting is no cause for alarm – it’s just their baseline. If you’re like me and aren’t much of a drinker, Aussie social gatherings may be a little awkward for you thanks to the drinking culture here. 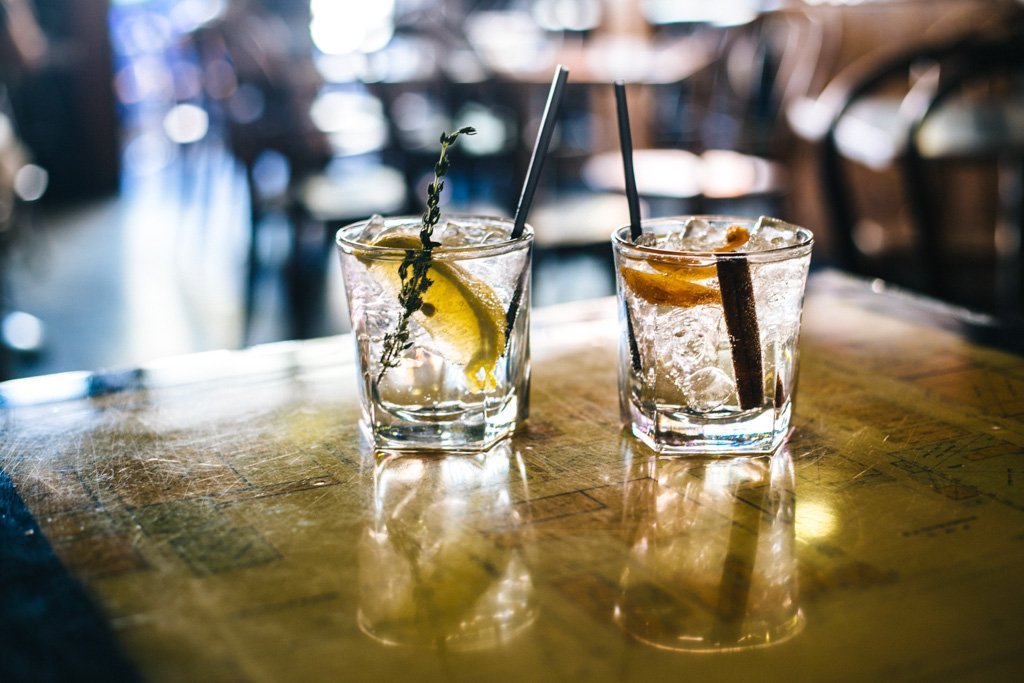 It’s A Little Behind The Times

Australia’s a little slow to catch onto things. Movies and music tend to hit the country well after the fact. Netflix didn’t make it here til last year. More importantly, the nation lags behind on some pressing social issues like same-sex marriage and sustainable living. It can be a slight shock moving from the US to Australia and having to take a few steps back in time.

Lack of Heating in Winter

First, let me just say that winter in Australia is mild and mostly pleasant. Unless you’re in the mountains or in Tasmania, you probably won’t be dealing with snow or freezing temperatures.

My problem with winter in Australia is that it feels colder than it is because houses here are not properly insulated. They tend to be excellent at staying cool during hot summer days AND cold winter days.

I mean, I feel like I shouldn’t have to wear wool socks and thermals during autumn when it’s 65 degrees outside and, like, 50-55 degrees inside… but maybe that’s just me being from the US, where every problem can be solved in an instant with a gadget, pill, gun (god forbid), or some other metaphorical bandaid. 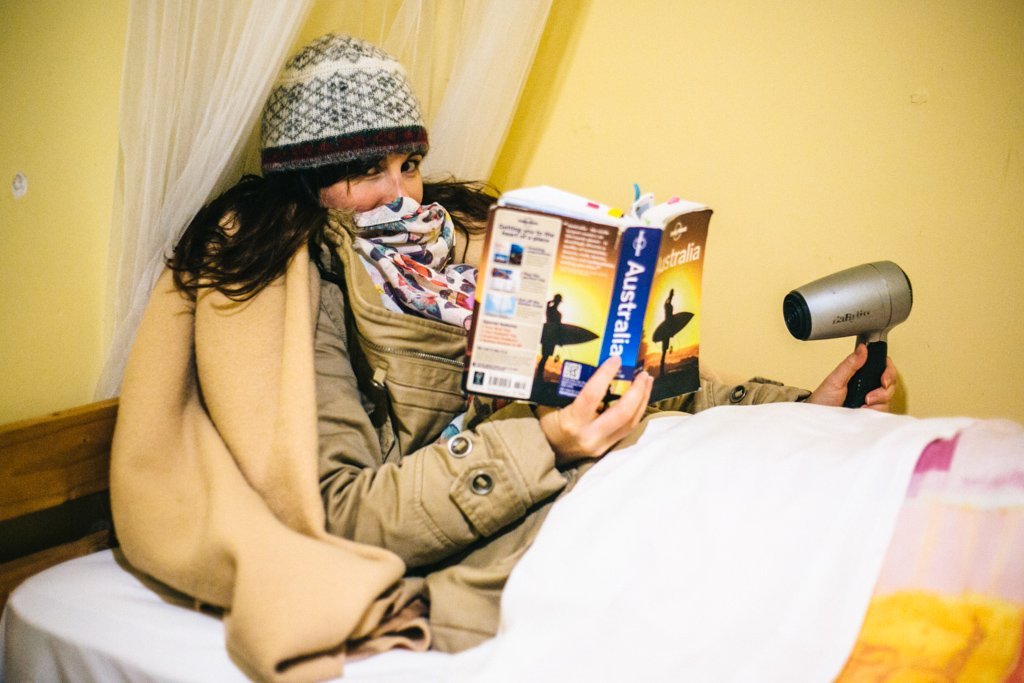 Freezing cold in April on the Great Ocean Road.

Lack of History and Culture

On my last day of work in NYC before moving to Australia, at our company holiday party, a colleague grabbed the mic and toasted to me. Among his witty, touching words to me he dropped the following joke: “What’s the difference between yogurt and Australia? Yogurt has CULTURE!”. Har har har!

But really, he had a point. Australia doesn’t have the awesome architecture or world-class museums of Europe, nor the exoticness of Asia. It’s a relatively young country, largely settled by the British as well as European convicts in 1788. But did you know that Australia is home to the oldest continuous living culture in the world?!

The aboriginals had inhabited Australia for tens of thousands of years before the Europeans arrived, but you hardly hear a thing about them because of all the strife. These aboriginal people have been discriminated against, stolen from, and outright killed by these settlers.

The Australian government has since taken away much of their land, confining aboriginal communities to specific regions across the country (the largest proportion being in the Northern Territory, where nearly 1/3 of the population is aboriginal). So yeah, aboriginal history and culture sure does exist in Australia… you just don’t hear much about it. 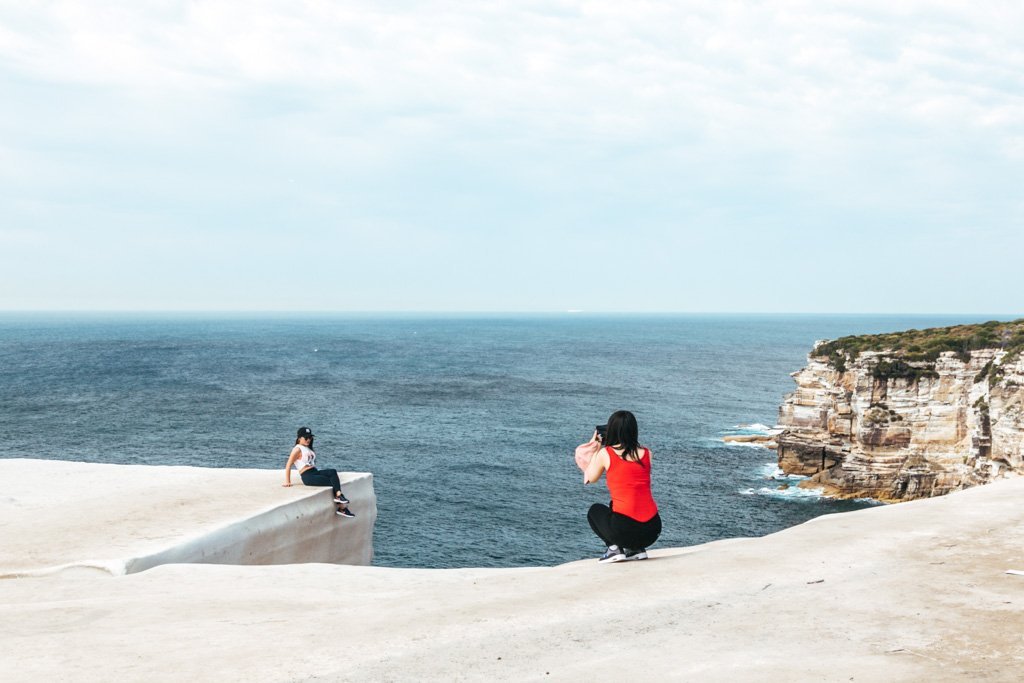 In short: Australia does have aboriginal history and culture, but it’s not honored the way it maybe should be. You probably wouldn’t visit Australia specifically to soak up its culture.

Do I miss being able to order most anything online with just a few clicks and have it delivered to my door 2 days later? God, yes – it doesn’t get much more convenient than that. I’m sure I’m several hundred dollars richer without the impulse shopping, but man – sometimes I wish I had the convenience of Amazon Prime in Australia.

Work and Residence Visas are Hard to Get

First, let me preface this gripe by saying that Australia is very generous with its visitor visas. If you intend to make a quick trip to Australia or spend a year or two backpacking the country, tourist visas and working holiday visas are pretty easy to get (depending on your country of citizenship, of course). 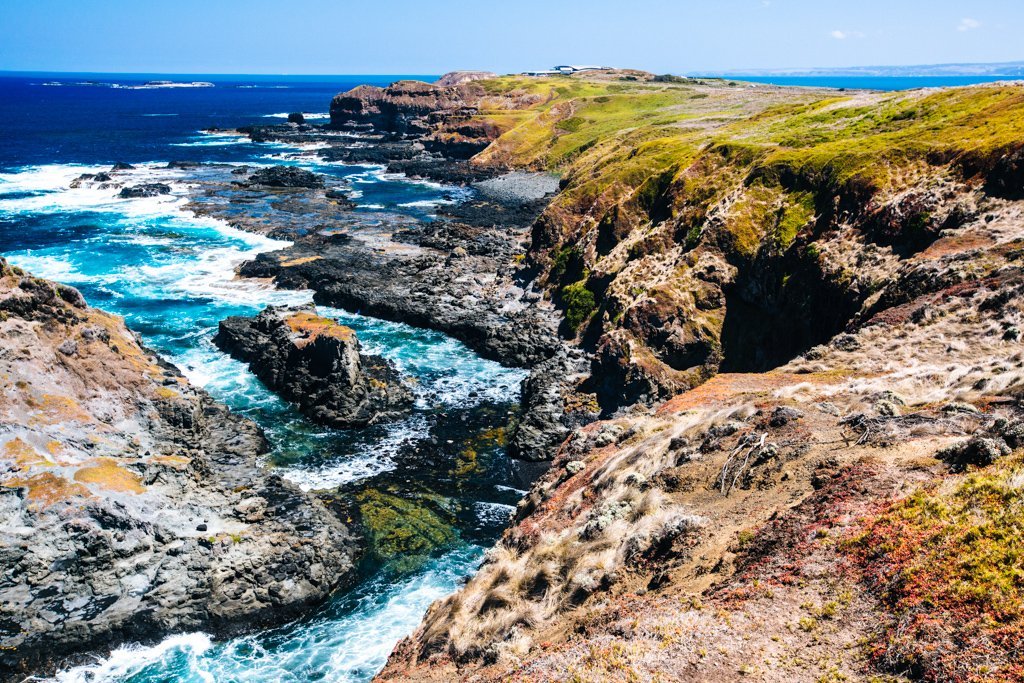 But if you want to stay in Australia long term to live and work, good luck! First you’ll need to make sense of the ridiculously convoluted visa process; then, if you actually find a visa you’re qualified for, you’ll have to provide a whole slew of obscure documentation to prove your worth. It’s a massive misconception that you can just marry an Aussie and have residency instantly handed to you.

These days, the Partner Visa is extremely difficult and expensive to obtain: you have to prove your relationship is legit in a number of ways, get all sorts of medical tests and background checks, and attend follow-up meetings after your visa has been granted to ensure the relationship is still running.

What do you consider bad things about Australia? Anything to add? 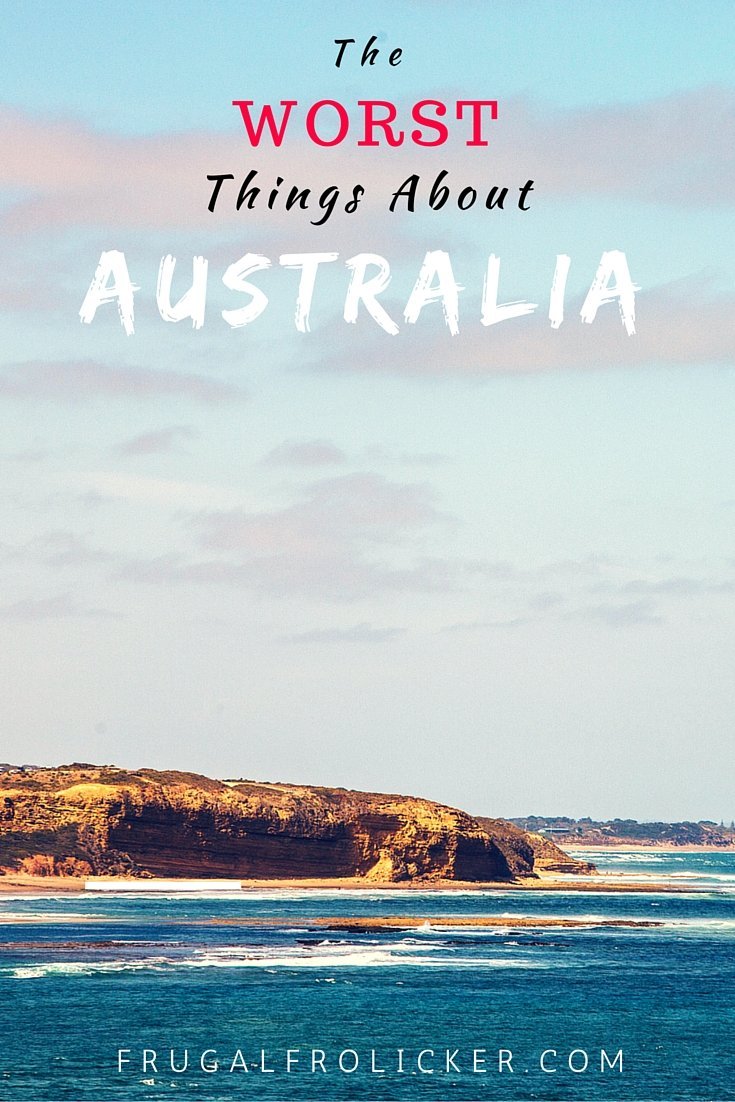