By on Australia Cycling

In the 2+ months I’ve been in Australia, I’ve been asked an inordinate number of times whether I miss home. Honestly? No, I don’t really miss my life in New York. It felt right to end my time there after 7 years, just as it feels right to be in Australia now.

BUT… one thing I do miss is being able to ride a bike every day. I used to bike from Brooklyn to Manhattan and back when I commuted to work during the week, and cycle around my neighborhood running errands on weekends. I’d love to have my own bike again, but I’d rather not have an anchor like that if I’m not sure I’ll be staying in one place for a long enough time. 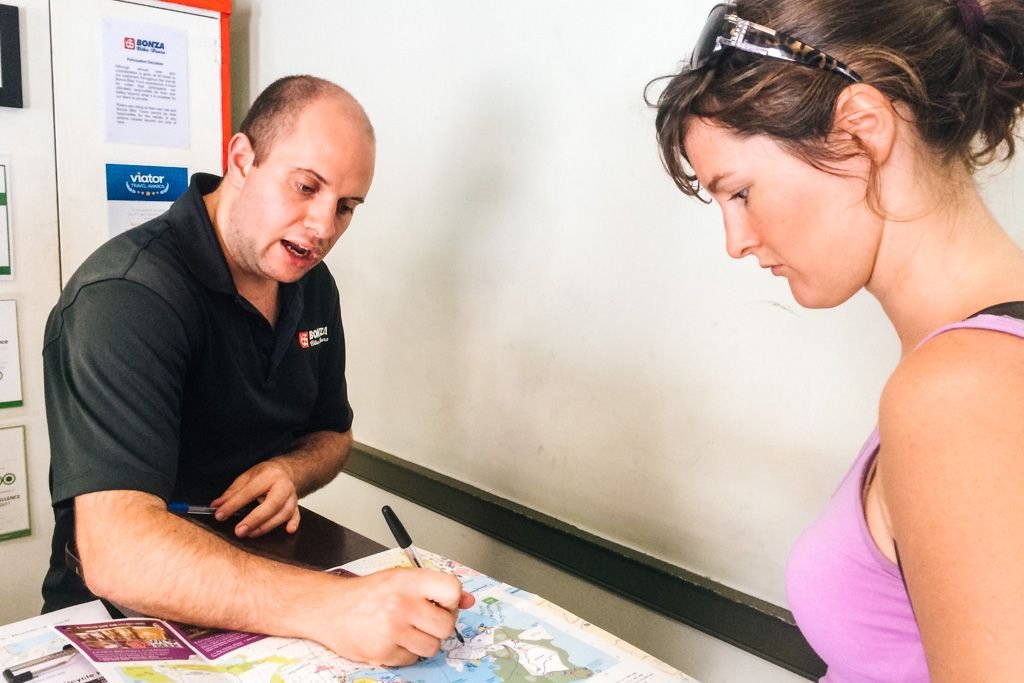 Jonesing for some quality cycling time, I reached out to the guys at Bonza Bike Tours to see if my flatmate and fellow cycling enthusiast Anna and I could borrow a couple of bikes for a day. They run some awesome bike tours around Sydney, which would have been perfect if we were brand new to the city – but since we’ve been living in Sydney for awhile, we were eager to get off the tourist track.

We walked into their office in The Rocks with a vague idea that maybe we’d ride over the Harbour Bridge into North Sydney, but open to their expert suggestions for where to cycle in Sydney.

We walked out with an entirely different plan, armed with restaurant and bar recommendations and brand spankin’ new bikes to take on the ferry over to Manly. Here’s how our Sydney cycling adventure unfolded — 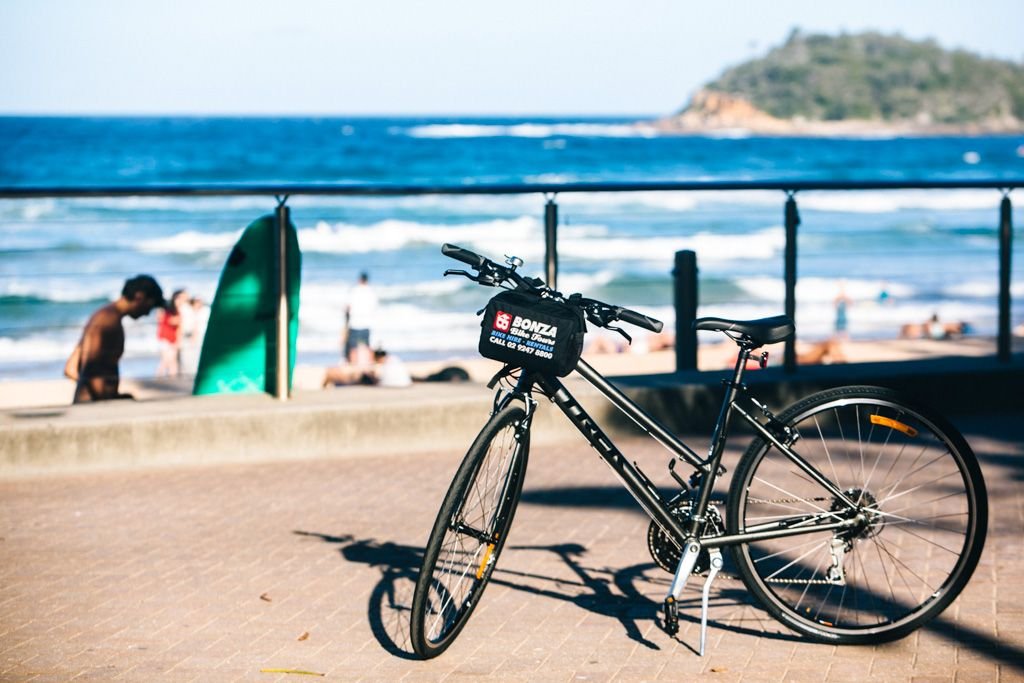 First order of business? Sampling Sydney’s supposed best fish and chips at Manly Ocean Foods, per the recommendation of Matt of Bonza Bike Tours. This nondescript outpost on The Corso is easy to gloss over, but they stand out because they actually use fresh fish in all of their menu items – caught locally that same morning, in fact. We each ordered the classic fish and chips and took it over to the beach, where we were harassed by a swarm of seagulls as we devoured our lunch.

Being British, Anna’s a bit more of a snob than I am when it comes to this fast food staple. She deemed them “good”; I personally found the fish to be fantastic, possibly the best I’ve ever had (which isn’t saying a whole lot, since I’ve only ever had fish and chips a handful of times in my life).

Properly fueled, we finally mounted our bikes and headed towards Sydney’s Northern Beaches! 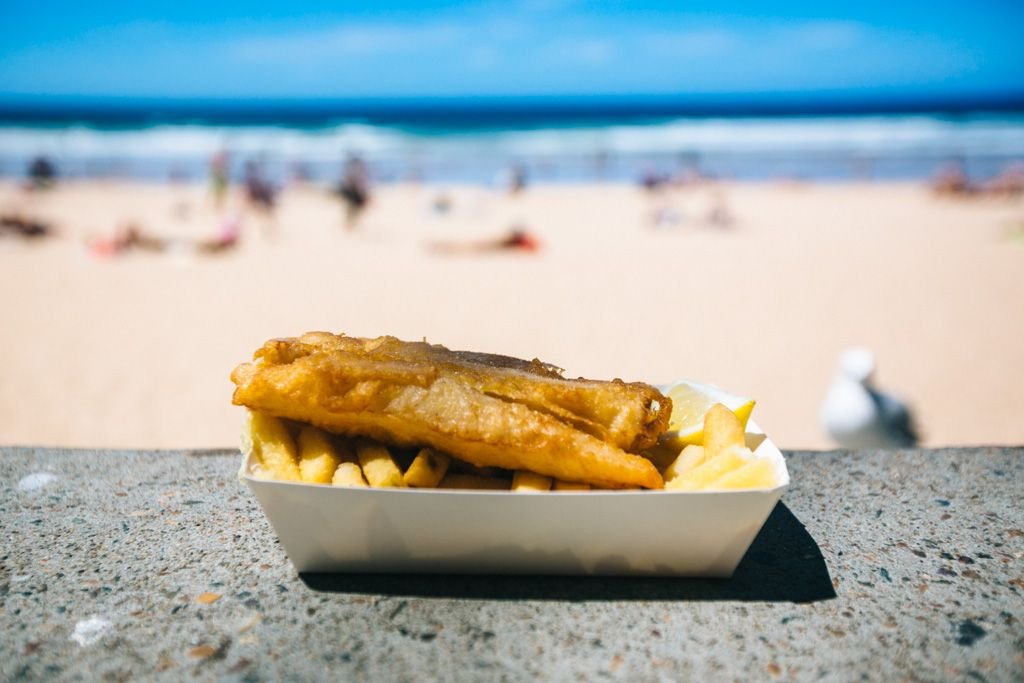 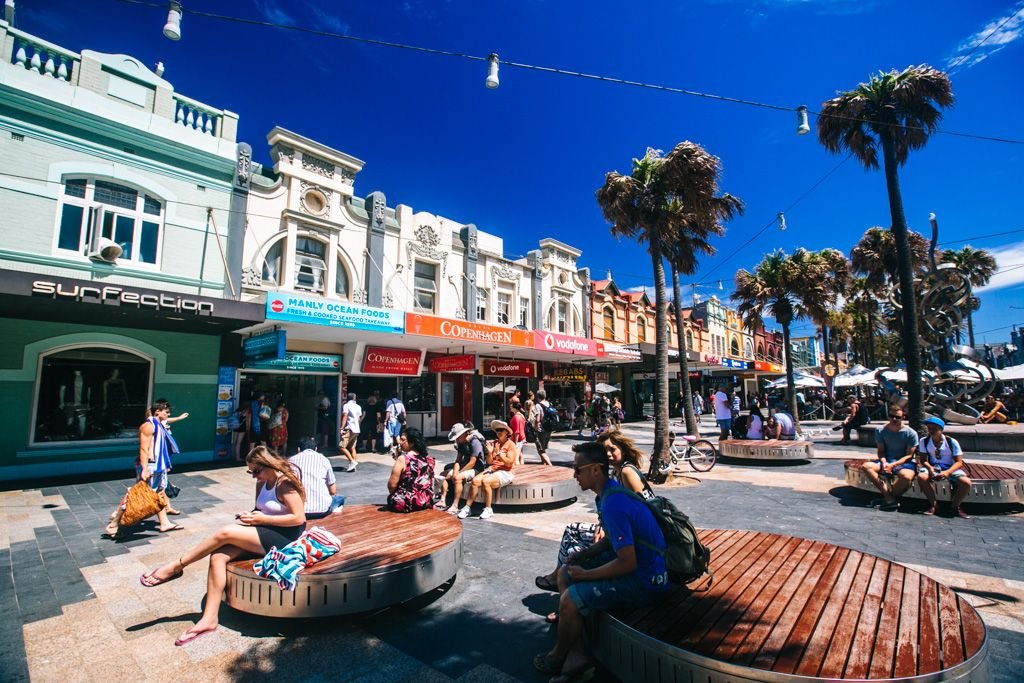 The guys at Bonza sang the praises of Freshwater Beach, urging us to ride up to Freshie and check out this local spot. It’s just the next beach up from Manly, but a bit of a mission to get to on foot – we were very happy to be able to ride there with our bikes!

When we first stepped onto Freshie I wasn’t super impressed with it; but as we walked along the coast stretching from the sand to the coastal swimming pool, we were slammed with some fetching views of Manly in the distance, and what turned out to be a beautiful Freshwater Beach just in front of us. Anna swam, while I layed out on the rocks at low tide and sunned myself. Man, this view! 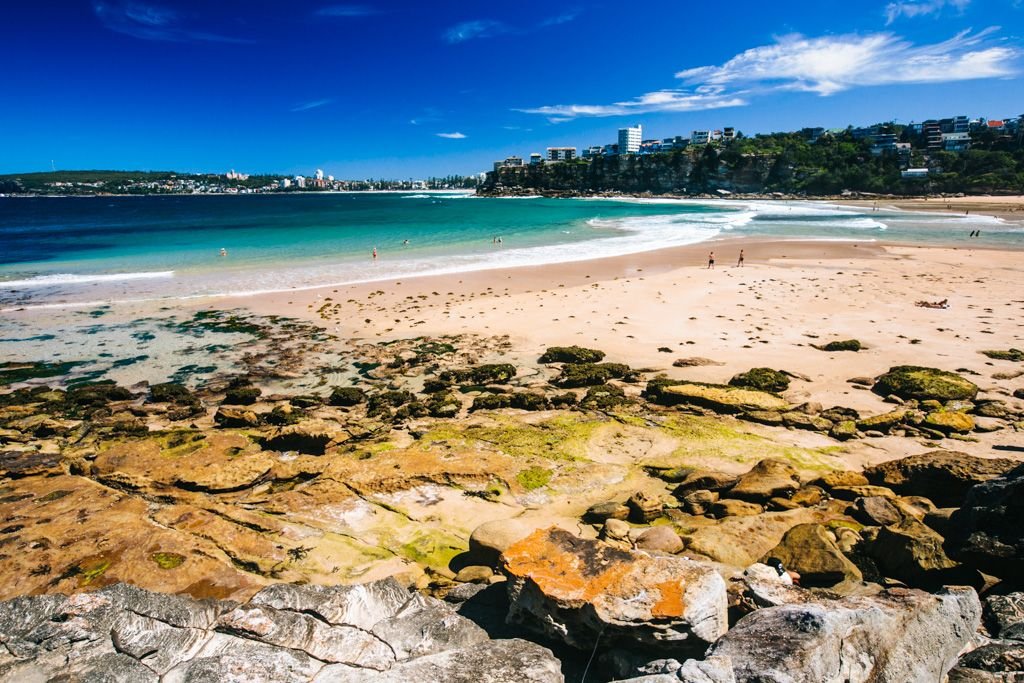 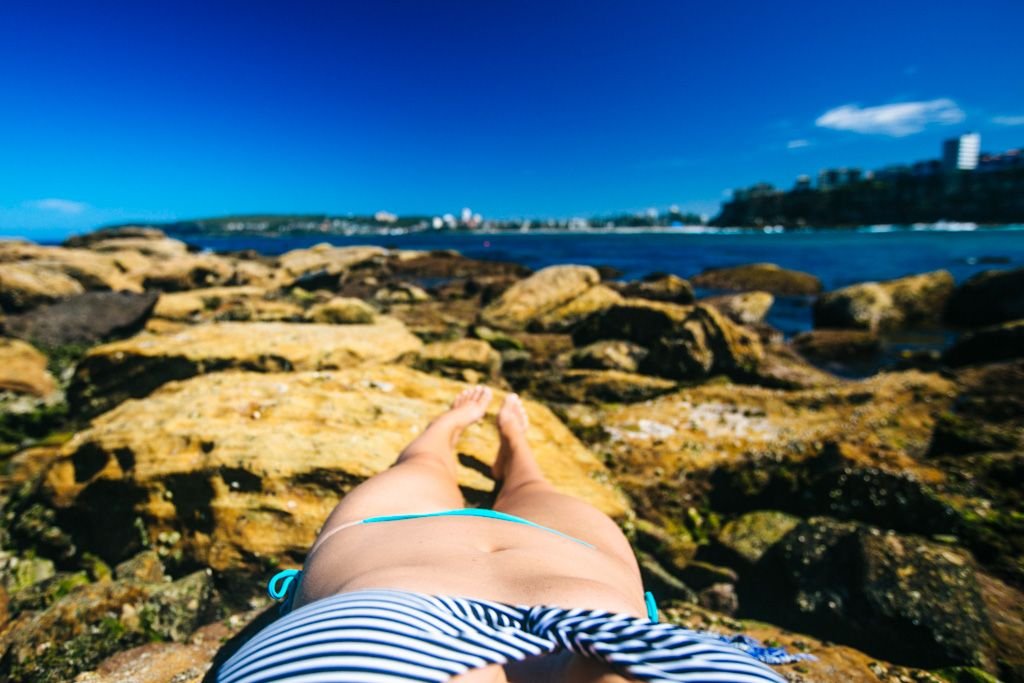 Acting on hypothesis, we moved on from Freshwater Beach and walked north along the coast at low tide to reach the next beach. I wasn’t entirely sure how far Curl Curl was from Freshie, nor if it was even possible to reach it without heading up to the main road – but that just added to our adventure, I think! 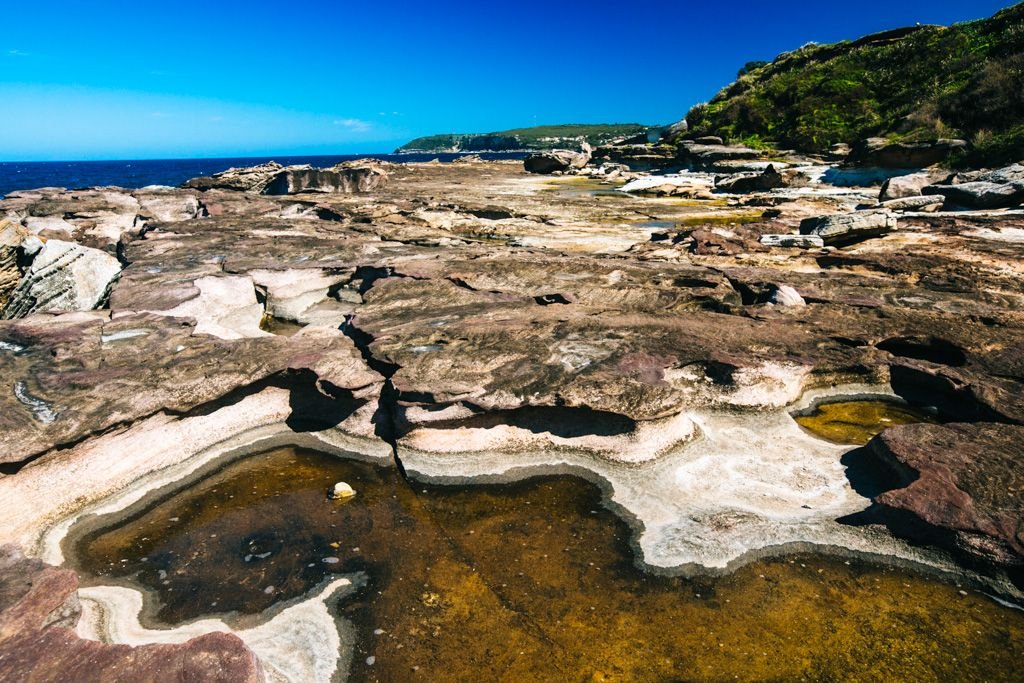 We did a bit of rock scrambling (and lunge-ing, in my case) on this rugged stretch of coast. I wandered out onto this rock ledge completely unaware of how thin it was until Anna started shrieking at me to get the hell off of it. I guess it was sturdier than it looked! 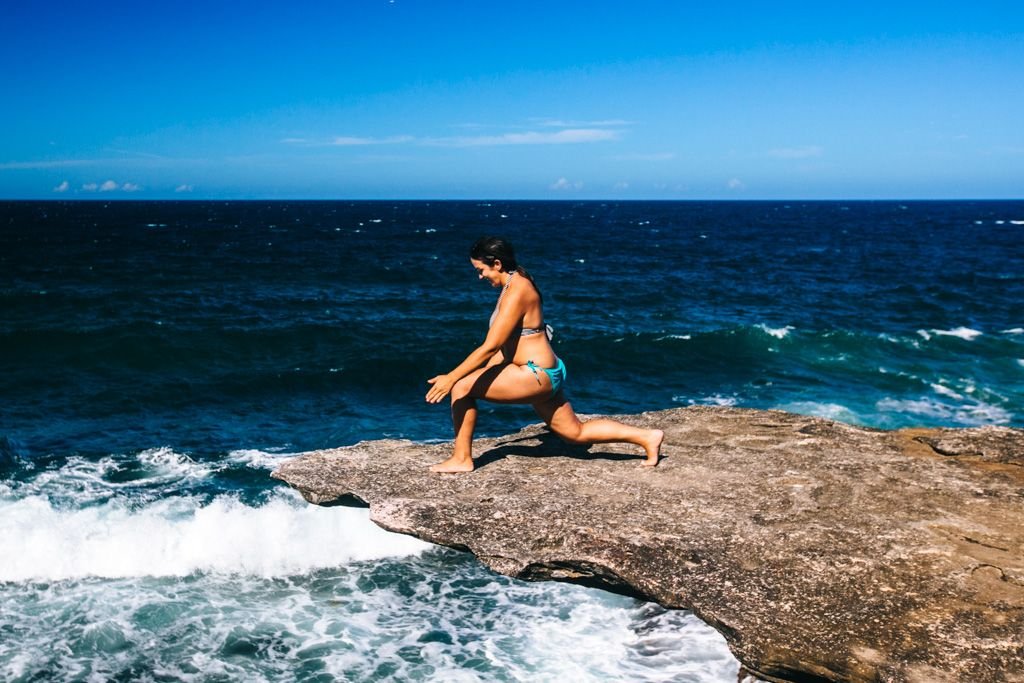 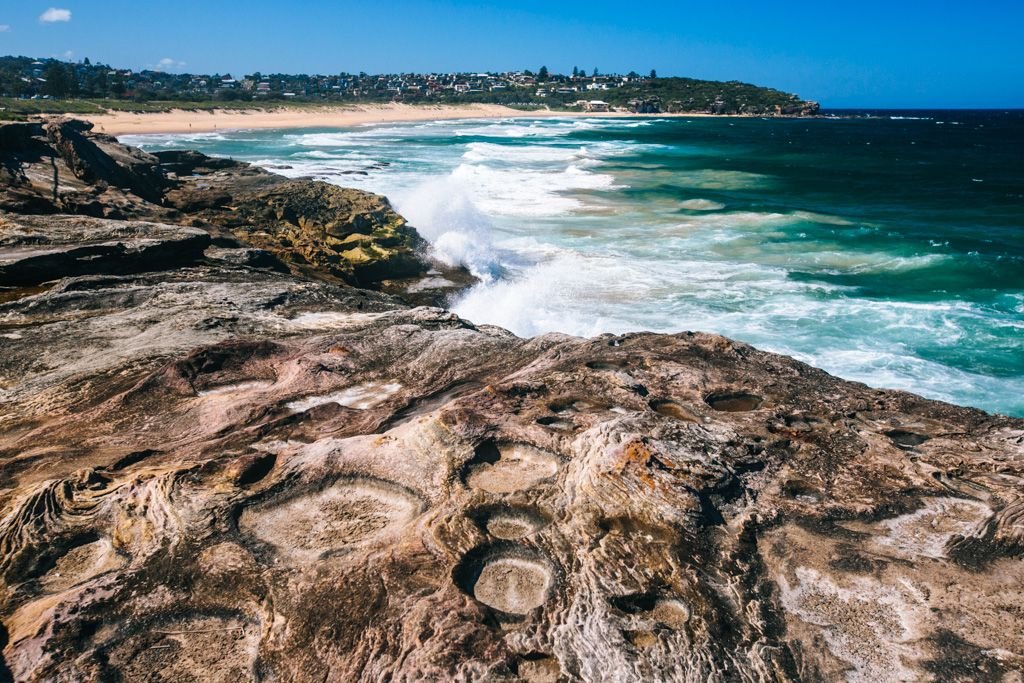 Really though, how gorgeous is the coast of Northern Sydney? In some parts, it looked like we were stepping foot on some other planet with all the oddly textured rock – then we’d look up at the crashing waves and golden beach in the distance and be reminded that NOPE, we really were in stunning Sydney.

Then we came upon what I’m deeming the highlight of our North Sydney cycling adventure: the ocean pool at Curl Curl Beach. Like most of Sydney’s ocean pools, it’s a big lap pool – but this one also had a small, shallow pool on the edge, facing out over the ocean. We couldn’t help but break into photoshoot mode – I mean, come on, does this scene not scream Facebook cover picture?! Let the gratuitous bikini shots continue! 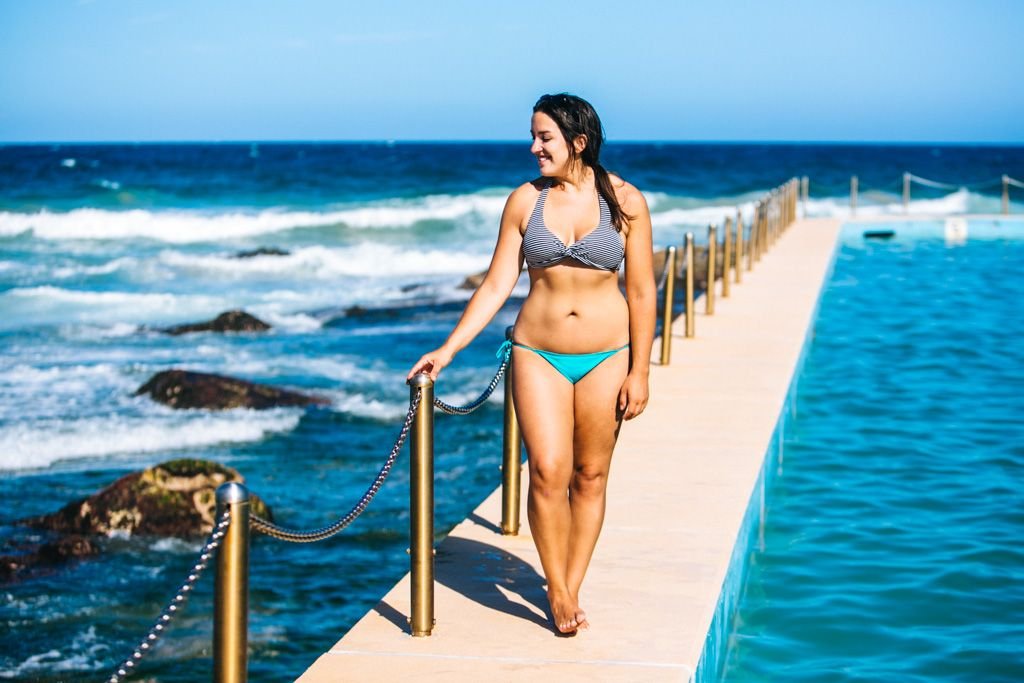 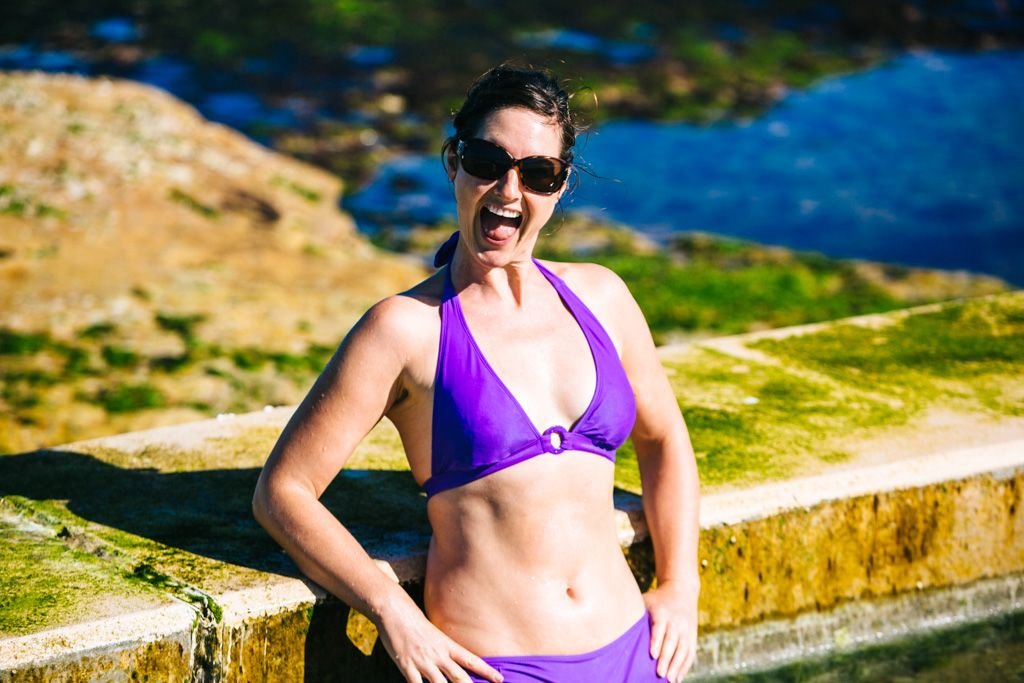 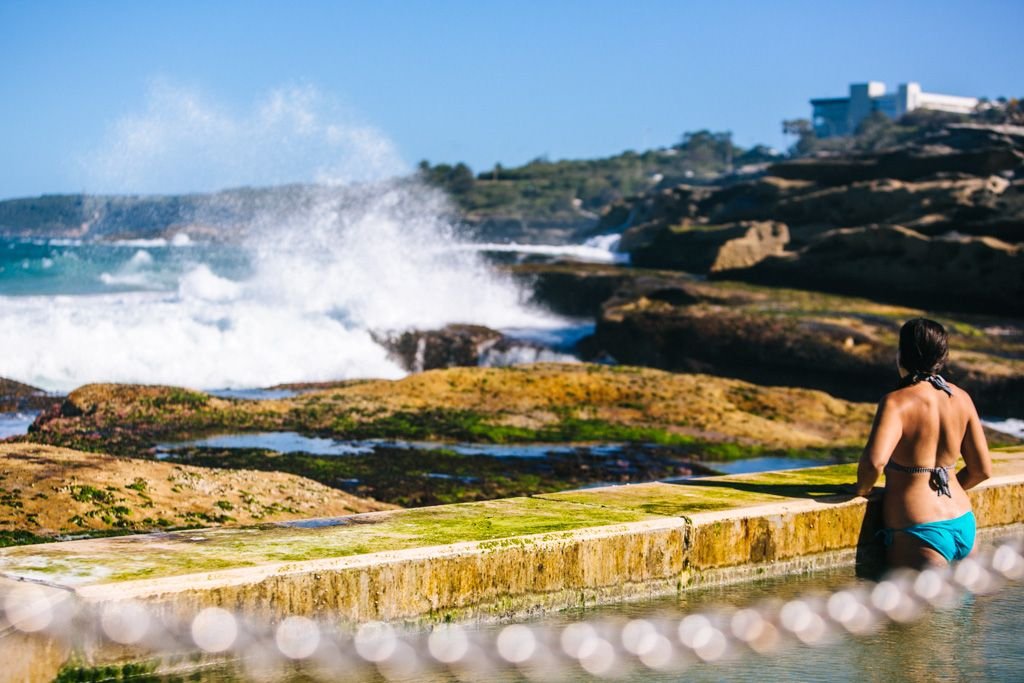 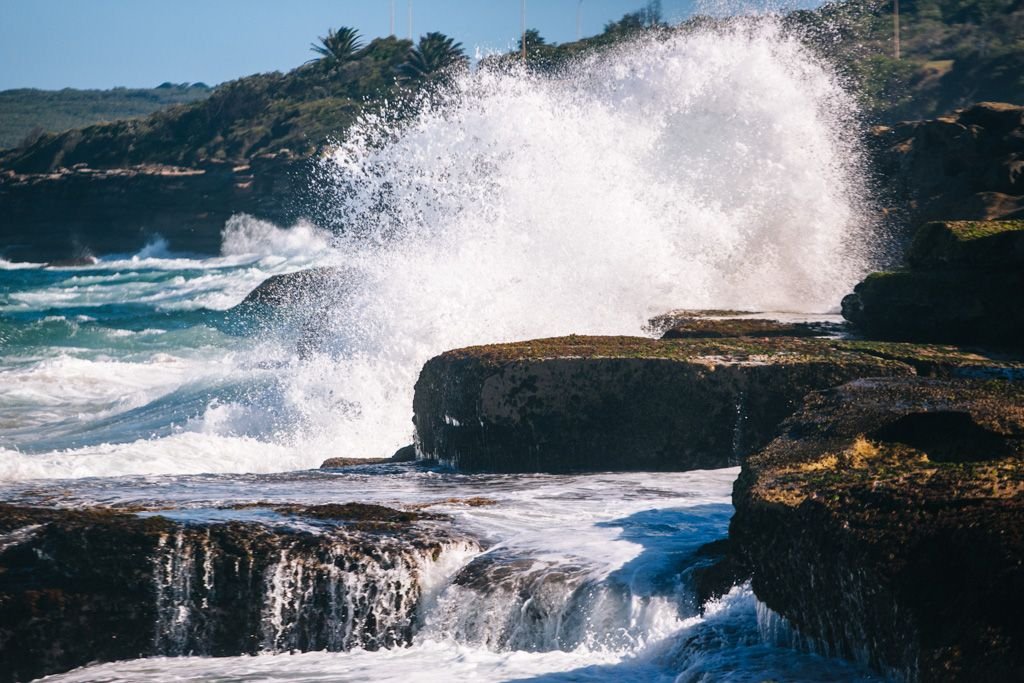 We walked back to Freshie from Curl Curl to get our bikes, then cycled back to Manly to pick up some picnic supplies to take up to North Head for a little sunset dinner. And oh my gosh, the bike ride to North Head was SO HILLY. My old bike never would have been able to handle the steepness, but our snazzy new Bonza bikes dominated them like champs.

But wait, what exactly is North Head anyway, and is it worth the strenuous trek uphill from Manly? (You’re totally wondering that right now, aren’t you?)

Well, North Head is part of Sydney Harbour National Park, aka the most glorious thing about this city. You can walk there from Manly Beach, which I highly recommend if you have the time (at least 3 hours for the roundtrip walk). Otherwise, it’s a quick (albeit exhausting) bike ride up the paved road from the Manly ferry terminal. You’ll know you’ve reached it when you see this stop-you-in-your-tracks panoramic clifftop view over Sydney Harbour: 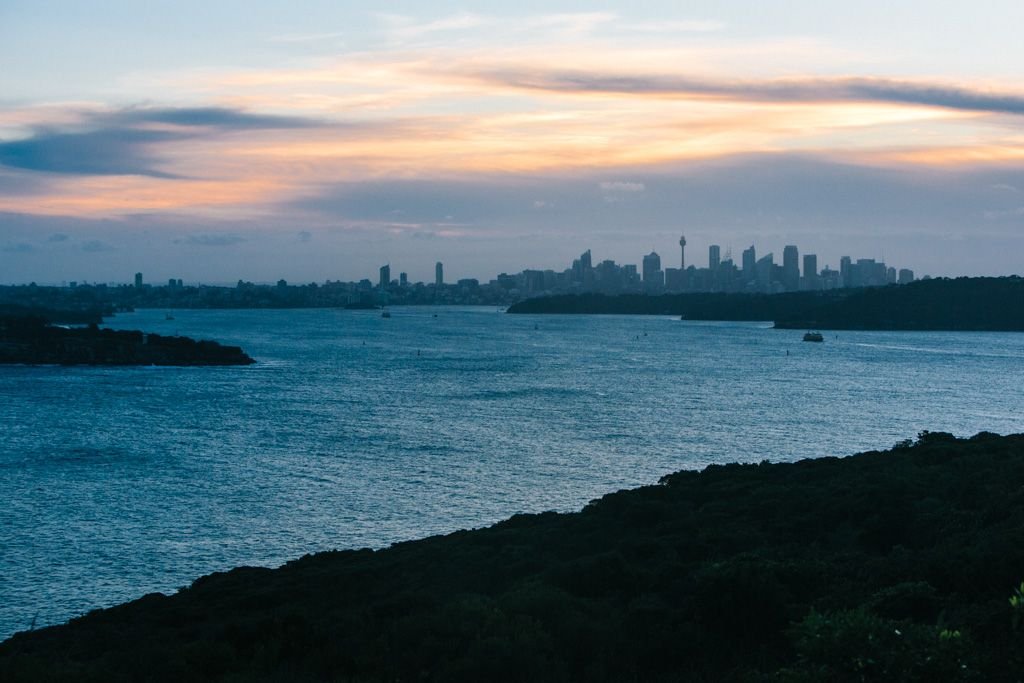 We joined the other picnickers on the grass there and fashioned some veggie wraps to nom on while waiting for the sunset. The only thing we were missing was a bottle of wine to share – but don’t worry, we made up for it afterwards by stopping at Manly Wine upon returning to Manly Beach. Don’t let the generic name fool ya – this place is FANTASTIC. I couldn’t get over the delightful decor, and how every single seating area was different yet equally enticing. And yeah, the wine was pretty ok too :) Cheers to the guys at Bonza Bike Tours for yet another solid recommendation! 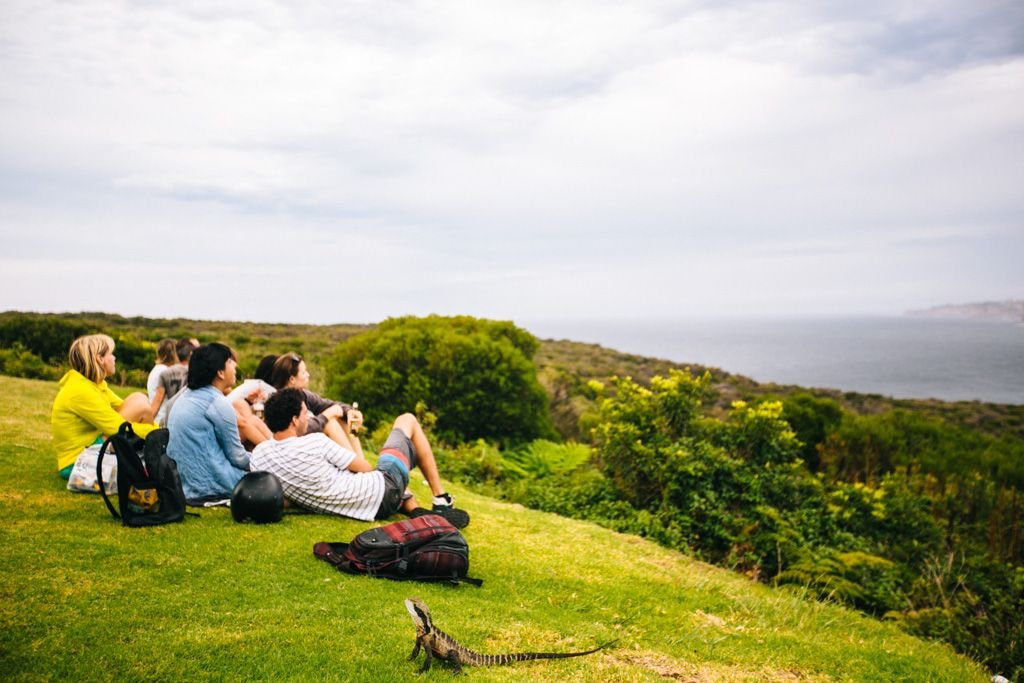 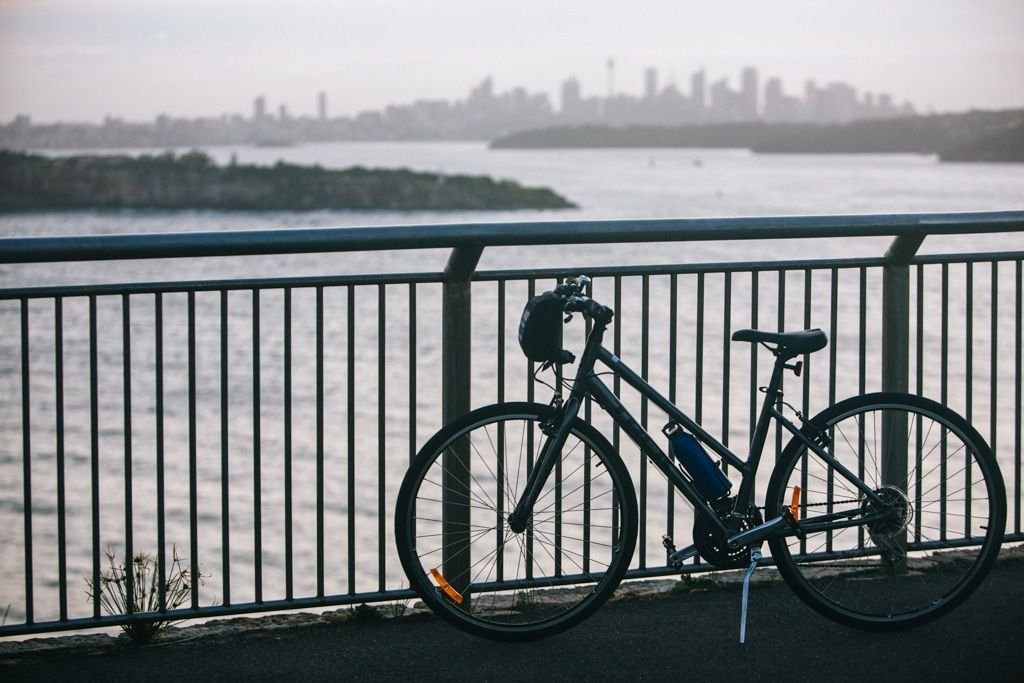 Thank you to Bonza Bike Tours for lending us bikes to ride for a day. Note that all opinions expressed here and elsewhere on this blog are my unbiased own, and are uninfluenced by any gifts or incentives I may receive.