I don’t know about you, but when I lay eyes on a photo of a devastatingly gorgeous landscape, that place tends to catapult to the upper reaches of my bucket list. In fact, I have a pretty solid track record of designing trips around these vistas. What can I say, I’m a natural beauty chaser!

More often than not, I find myself chasing beautiful beaches and epic coastlines because that’s what makes my heart sing the loudest, *ahem*: 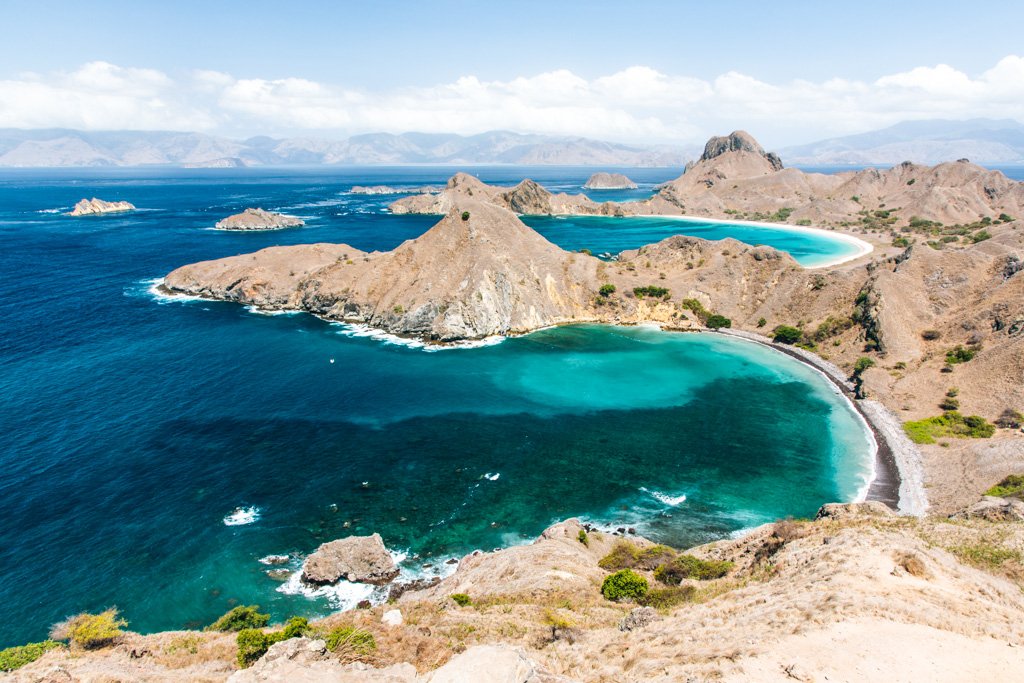 This spot right here? I first glimpsed it when I noticed several travel bloggers and influencers posting photos of it from a press trip they all went on in Indonesia. I had absolutely no idea that just a couple years later I’d be following suit and working with the Indonesian Ministry of Tourism myself.

While I was invited on what was penned primarily as a diving trip to Komodo, I was secretly most excited to do this Padar Island hike. I mean, do I even need to explain myself here? 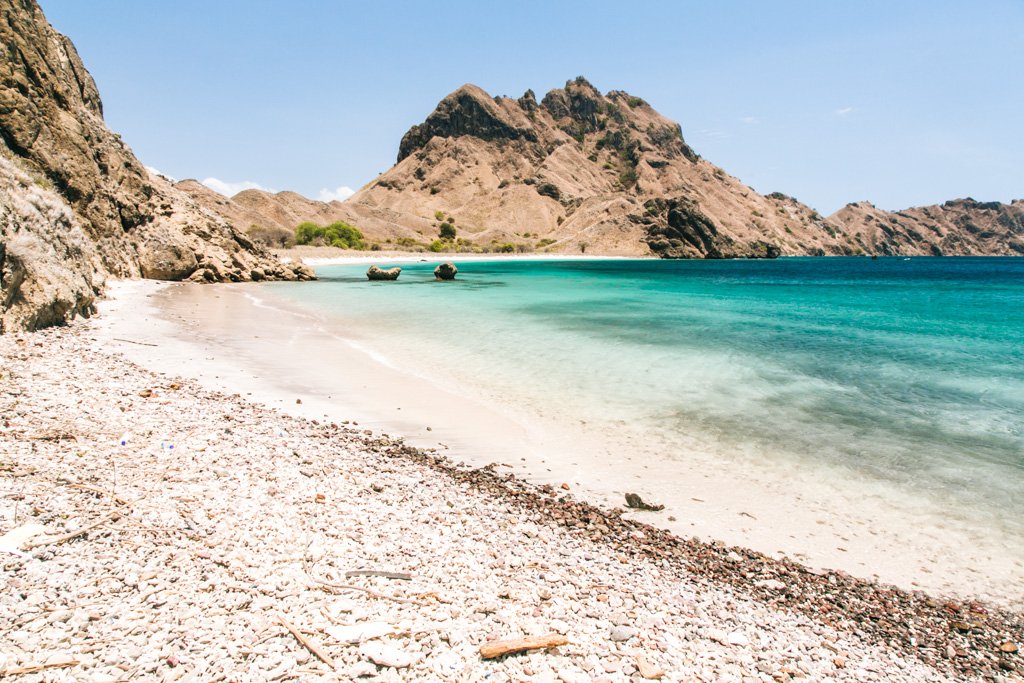 Unfortunately the current conditions weren’t entirely on our side during this trip and our liveaboard crew had to change up the itinerary to accommodate. When the captain came out to inform us and announced that we’d be skipping Padar Island and Pink Beach, my heart sank. The other divers in our group seemed entirely nonplussed – fair enough, most of them were hardcore divers whose top priority on this trip was, indeed, to dive.

But me? I’m first and foremost an outdoor adventurer (and secondly a beach bitch, heh ;). Skipping this island that would yield one of the most glorious views I could ever dream of would leave me devastated.

I really hate making a fuss over anything, though. I pride myself on being able to quickly adapt and go with the flow, and on just generally being an easygoing and pleasant human. Complaining and making things more complicated? Nope, I’d sooner stand on stage naked than make a fuss. Anyone else with me on this? 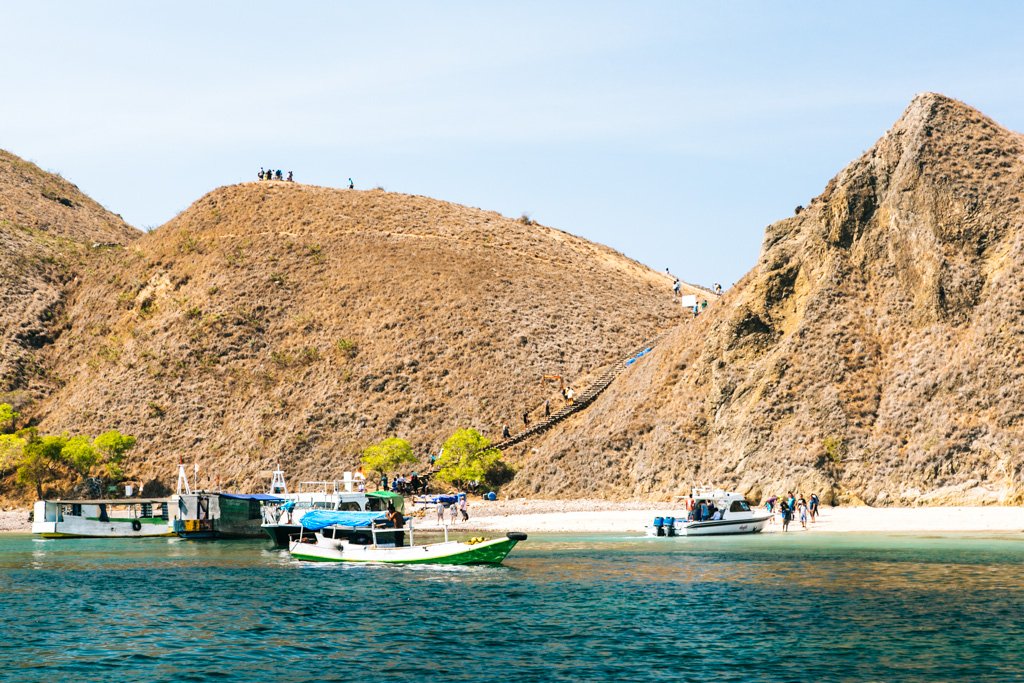 It went beyond my personal preferences, though. I wasn’t invited on this trip to take epic professional underwater photos like the others were – I was there as a travel blogger. I had an unspoken responsibility to thoroughly cover the Komodo region and share its highlights with my blog readers and social media followers. If all I had to show for it was a couple days of diving and a handful of amateur-looking GoPro shots taken underwater, then I’ve done a shoddy job.

So you see, skipping two of the main attractions in Komodo National Park wouldn’t leave me with much in the way of content to produce from this trip. I just HAD to say something.

And bless our crew! I don’t think they understood why each of us was on this trip and what our responsibilities were, and I’m not sure they fully got it after I expressed my concerns. But they definitely understood that I was hugely disappointed to be missing out on these places, and they rallied bigtime by hiring a speedboat for the day.

So while 4 of our 6 media participants spent the morning diving with manta rays (I know, I can’t believe I missed this!), Tom and I and a gaggle of Indonesian tagalongs took the speedboat out to Pink Beach and Padar Island Indonesia. 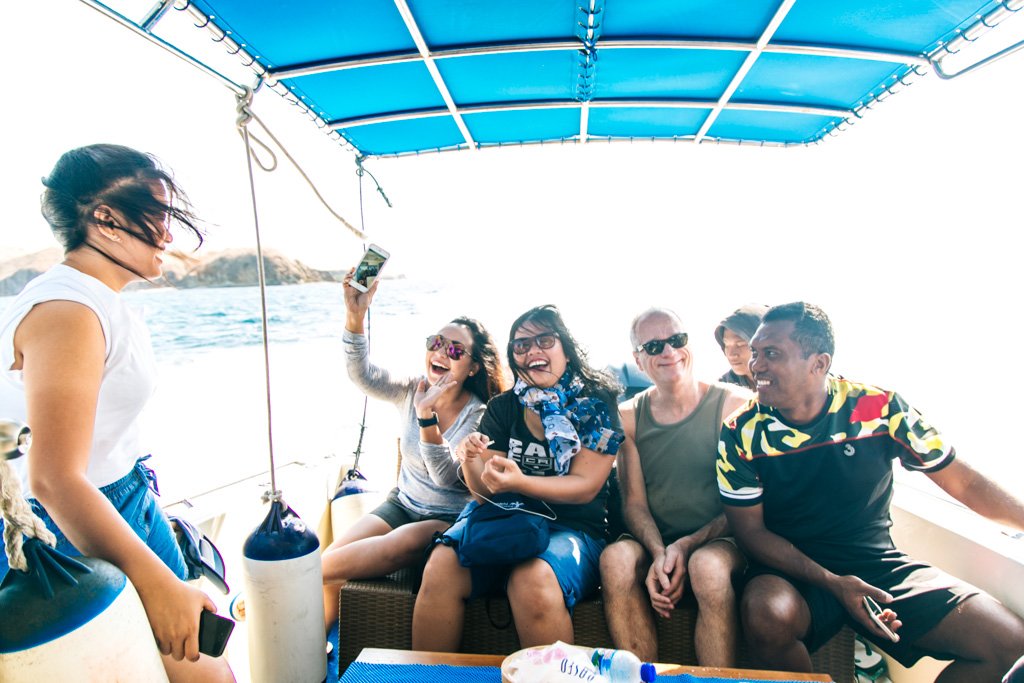 Pulau Padar is a small island smack in the middle of Komodo National Park. As far as I know, the only reason to visit it is to hike to the top of the hill for that epic view. Most tour boats stop here early in the morning when the heat is bearable and the sun not-so-scorching, but we didn’t arrive til late morning as we’d had to wait for our speedboat to be delivered to us.

I may be in the minority here, but I’m so glad we did the Padar Island hike around midday! We started it while all the other groups were making their way back down, and by the time we wrapped up we basically had it all to ourselves. Yes, it was stupid-scorching-hot and I’m still in disbelief that my skin didn’t get torched from the two hours I spent frolicking around in a sports bra with minimal sunscreen on (note to self and all: DON’T DO THIS). If you are sensitive to heat and sunlight, you definitely want to make this a sunrise or sunset hike. 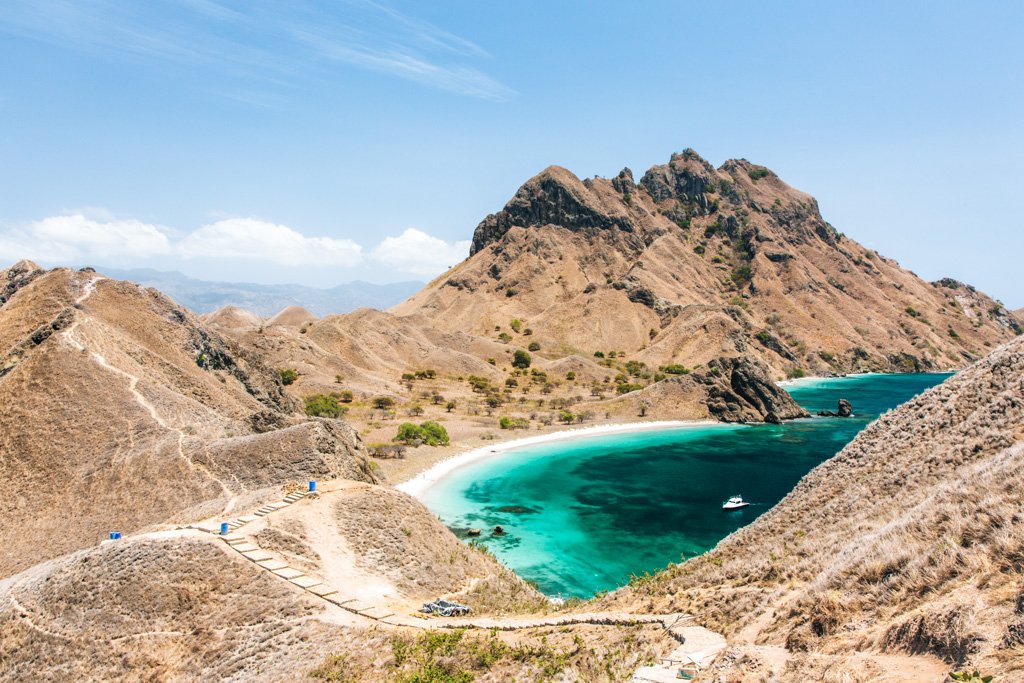 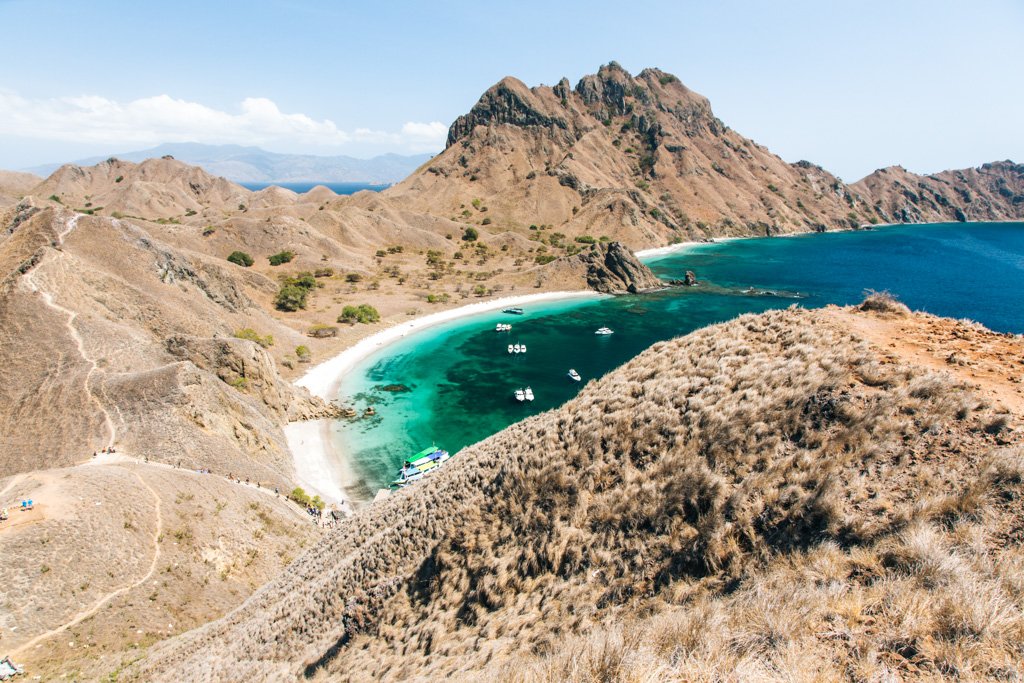 Also: LOOK AT THESE BLUES! The water just doesn’t look like this early in the morning, so if we’d stuck to the original itinerary we wouldn’t have seen it so vibrant. The tradeoff, though, was missing out on the golden hour light which would have made the land look more soft and glowing. Personally, I’ll take bright blue water over golden land most any day. 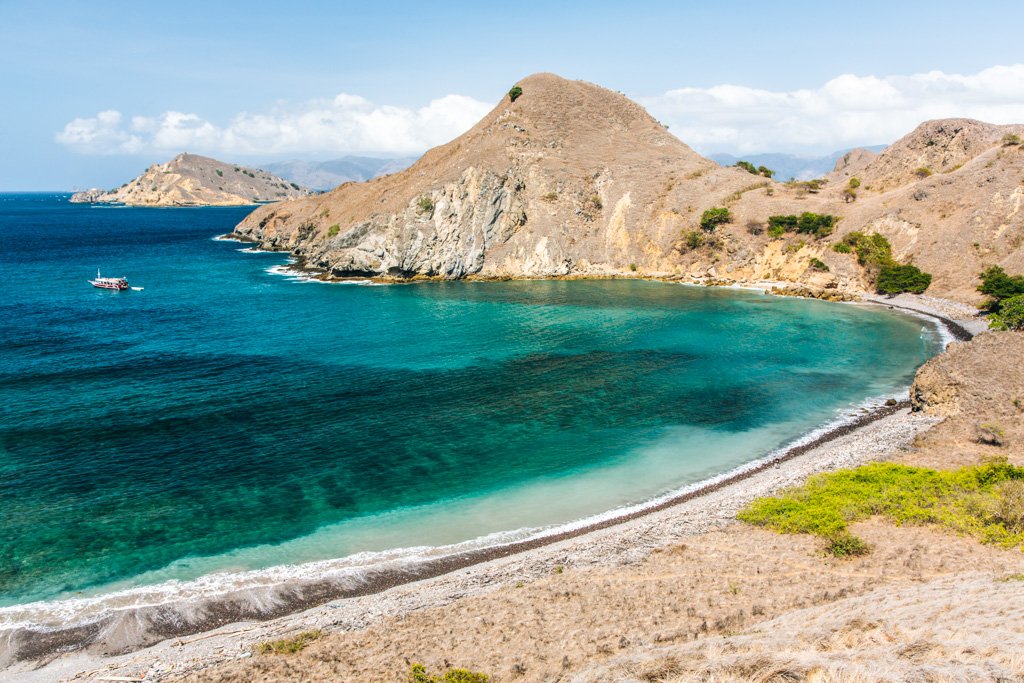 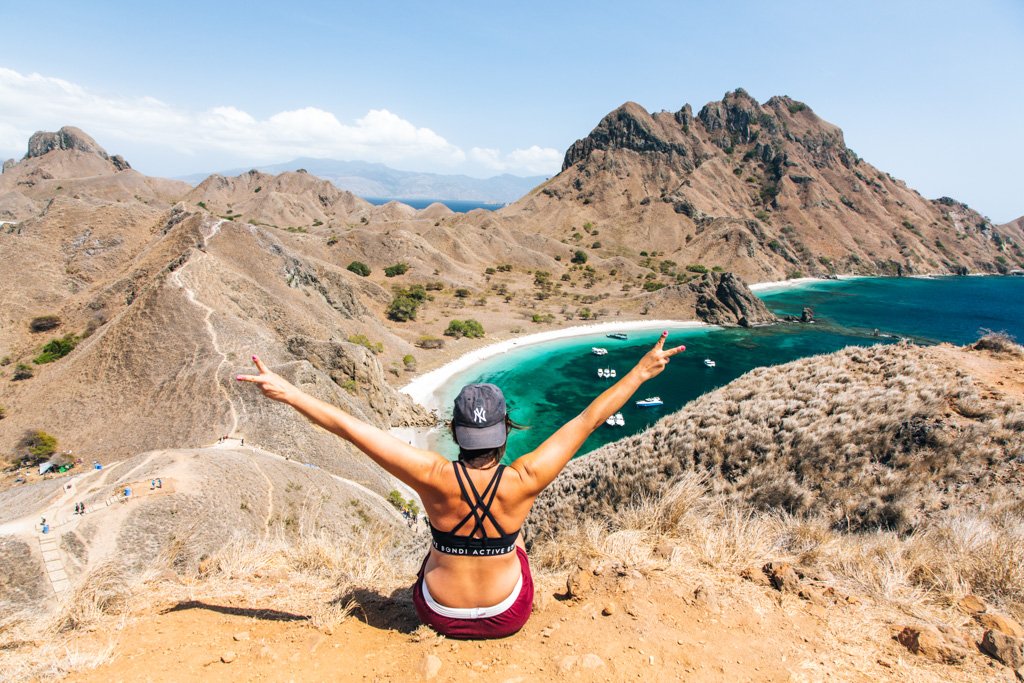 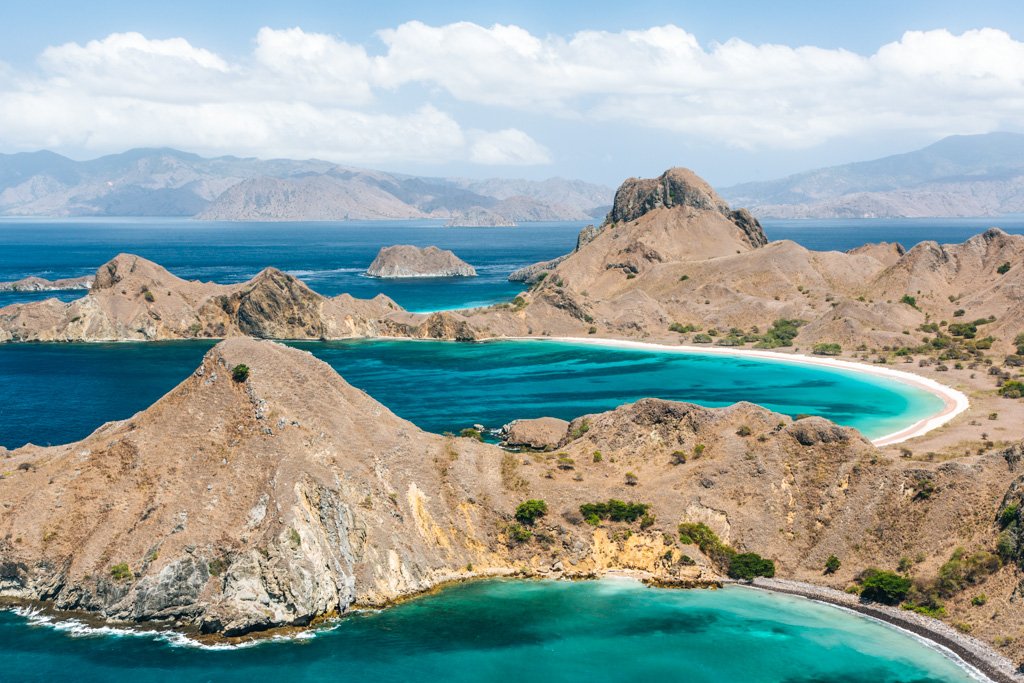 It’s tricky to say how long the hike up to the Pulau Padar lookout takes. It’s not very difficult, but you may be slowed down by the relentless heat (and lack of shade) or nonstop photo ops. I’d say 2 hours return allows for either scenario.

All boats drop off on the beach, and from there you’ll spot stairs that mark the start of the hike up the hill. The bottom half of the trail is an easy walk up stairs that may or may not be blocked off (if they’re blocked, there’s a worn footpath right next to them). The top half involves more rock scrambling, but oh my word is it worth the effort. 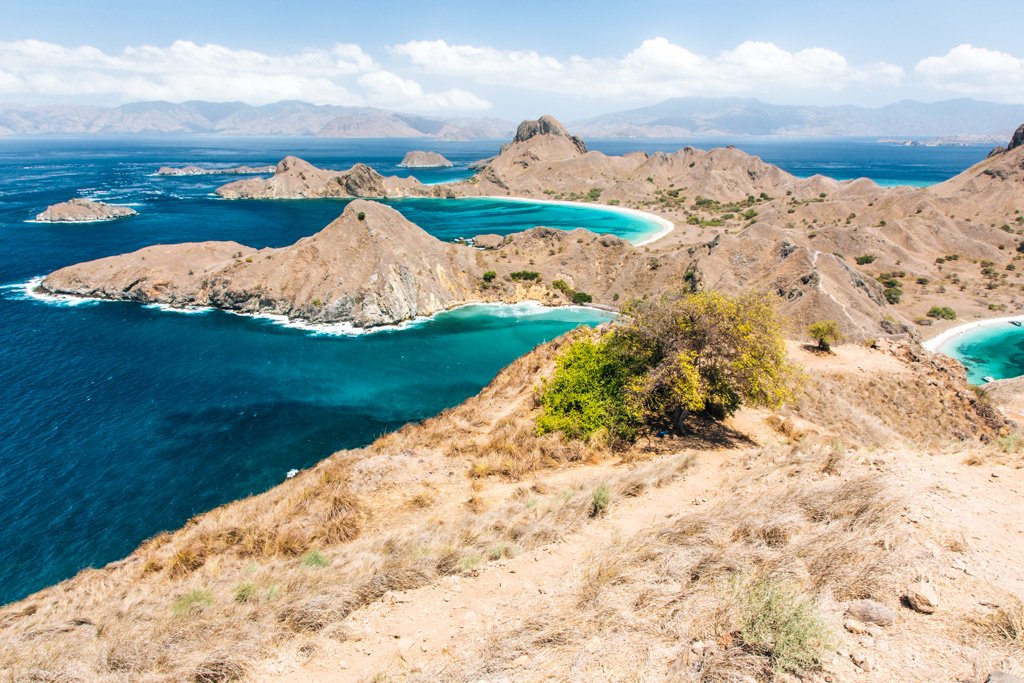 View from the top of Padar.

One thing worth noting is that the top of the hill (see above photo) is actually not the best view from Padar Island. There’s a big tree that partially obstructs the view of one of the bays below; therefore, the view from just below this final hill and in front of the view-blocking tree is the ideal spot for selfies, group shots, and top photo ops. Don’t miss it! 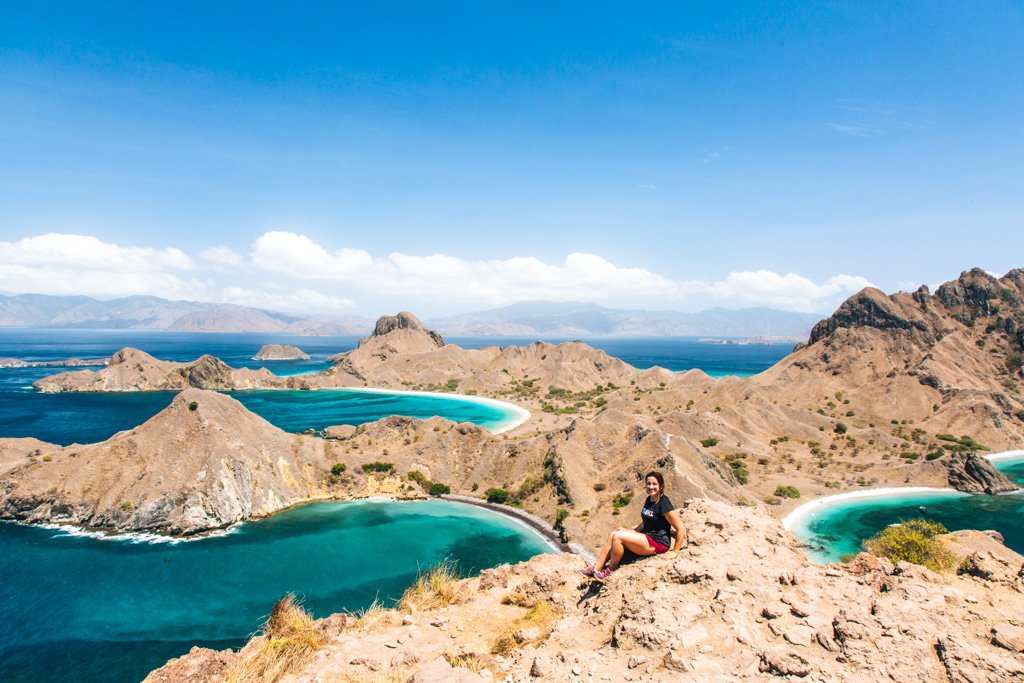 Lastly, be sure to take in the views all along the way up to the top! If you venture off to the side, you’ll be rewarded with closer views of the bay where the tour boats drop off – it’s really gorgeous! 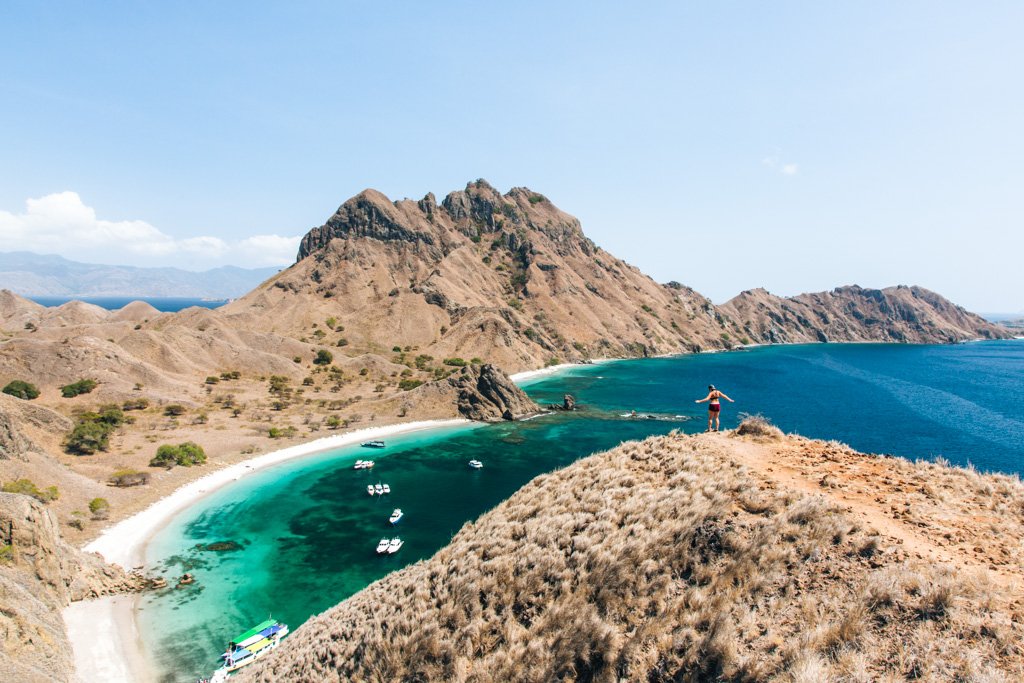 While I’m super bummed to have missed the epic manta ray dive (amazing footage from it is now on DivePlanit), I’m very happy about my decision to skip it in favor of the Padar Island hike.

Thank you to the Indonesian Ministry of Tourism for hosting me during my trip to Komodo. Note that all opinions expressed here and elsewhere on this blog are my unbiased own, and are uninfluenced by any gifts or incentives I may receive. 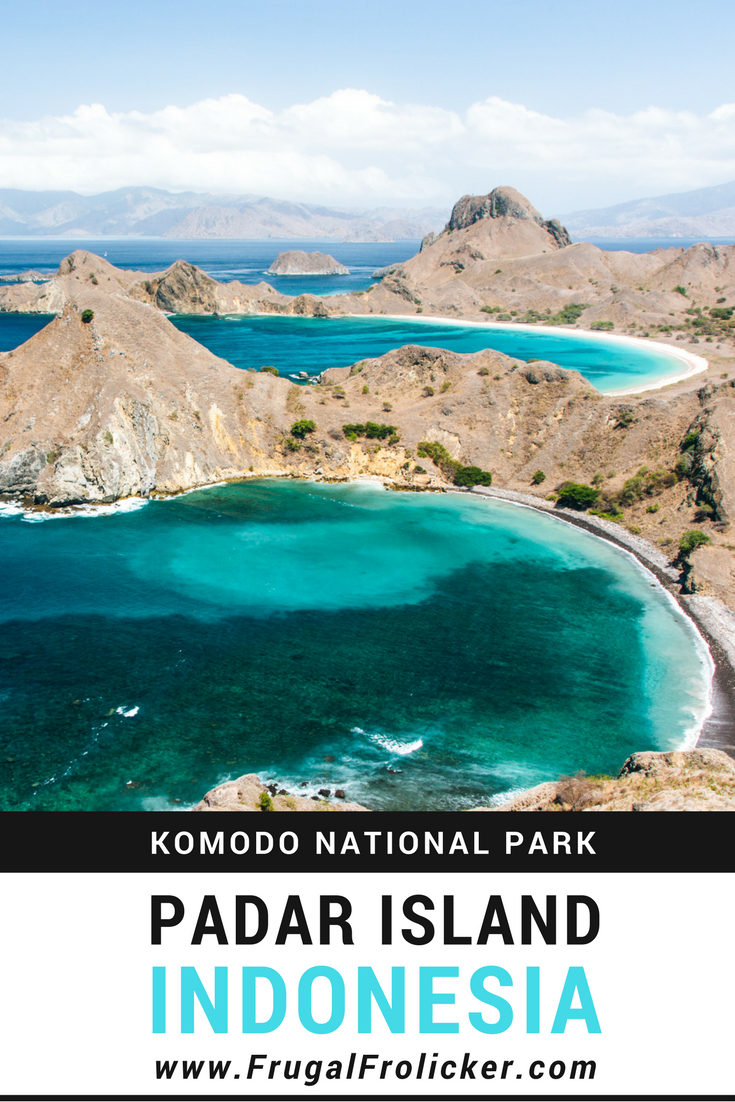 The easiest way to reach Padar Island is by boat, via a day trip or liveaboard from Labuan Bajo on the island of Flores. Cheap flights are available to Labuan Bajo from Bali and elsewhere in Indonesia.

Pulau Padar is either lush and green, or dry and brown, depending on what time of year you visit. December-March is rainy season and thus not the best time to visit Padar Island, but right after that (April-June) is when the island is at its greenest. From July-November, Padar Island will be dry and looking like it does in these photos (note: I visited in October).

Aside from a couple of sparse trees, there is no shade on the Padar Island hike. Definitely equip yourself with sunscreen, water, and a hat. It gets HOT in Indonesia!

The best spot for photos is the second-to-top hill, not the very top of the island.

Sadly, there is a bunch of rubbish left on Pulau Padar, both on the hiking trail and the beach. PLEASE carry out any trash that you carry in, and even better: bring an extra bag with you so that you can carry out extra rubbish that you find along the way. While it’s always important to be eco-conscious, I feel it’s even more crucial in Komodo National Park because of its unique underwater ecosystem. Rubbish left in the sand or on the trail can so easily make its way into the sea and permanently damage the incredible marine life here. :(