Remember that time I roadtripped from Melbourne to Perth, only to fly straight back to the east coast to explore Hinchinbrook Island? That happened over 4 months ago, but the experience is still fresh in my mind. I’m excited to finally start sharing it with you guys!

Thanks to Matador Network, I was nominated to join a group of journalists organized by Tourism & Events Queensland (TEQ) to hike the Thorsborne Trail on Hinchinbrook Island in May 2015. We spent 4 days and 3 nights climbing mountains and traversing beaches on Hinchy, one of Queensland’s lesser-known islands. I’ll be sharing more practical tips on completing the trek in another post; for now, just sit back, relax, and enjoy 20 of my favorite photos from Hinchinbrook Island! 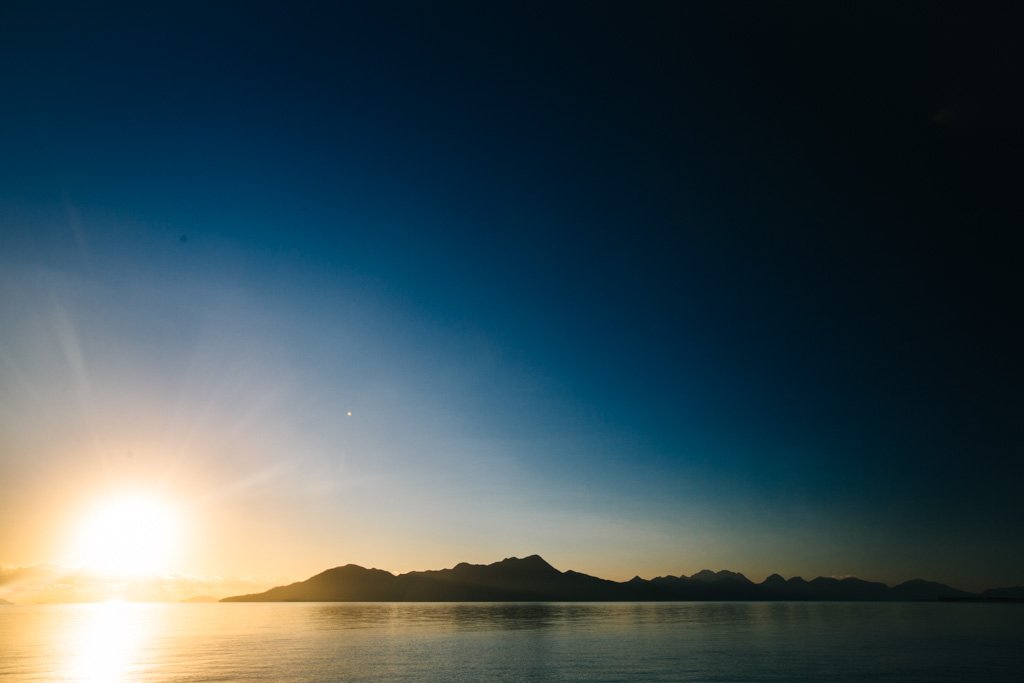 Our journey to Hinchinbrook Island began in Townsville, where we packed our bags full of dehydrated food and drove 2 hours north to Cardwell. Some journalists in our group admitted to having some trepidation about taking on a difficult hike while carrying a heavy pack on their back, but everyone was in high spirits before we set off. 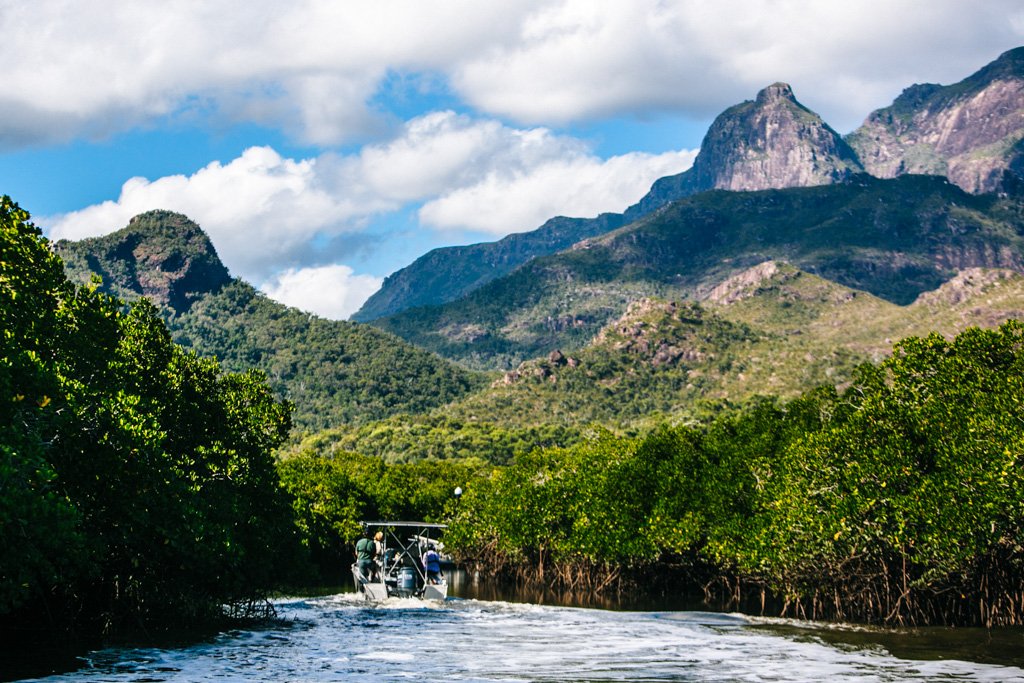 From Cardwell, a boat whisked us off to Hinchinbrook Island and dropped us at the northern end of the Thorsborne Trail. We oohed and ahhed at the mountain peaks that soared over the maze of mangrove estuaries while silently coming to terms with reality: soon we’d be carrying our body weight and more up those mountains, in the hot Queensland heat. With several multi-day treks under my belt (Everest Base Camp Trek in Nepal, Laugavegur Trek in Iceland, Overland Track in Tasmania), my confidence overrode my nerves and I stepped off the boat thinking: let’s do this! 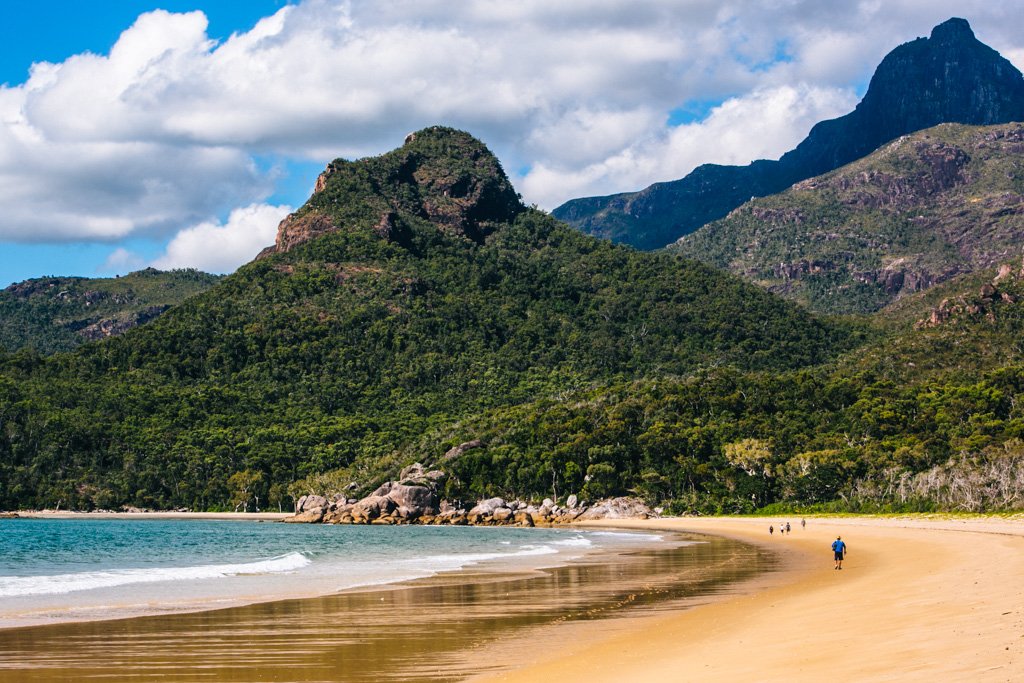 The Thorsborne Trail is not a hike you ease into. After crossing the gloriously flat sand at Ramsay Bay, it takes you onwards and upwards. Around the highest point of the trail on Day 1, there’s a side track that leads up to Nina Peak. Drop your pack and hike up there with just your camera and water bottle – trust me, you’ll want both! From Nina Peak, you’ll enjoy 360-degree views of nearby mountains, the beaches below, and the estuaries whence you came. 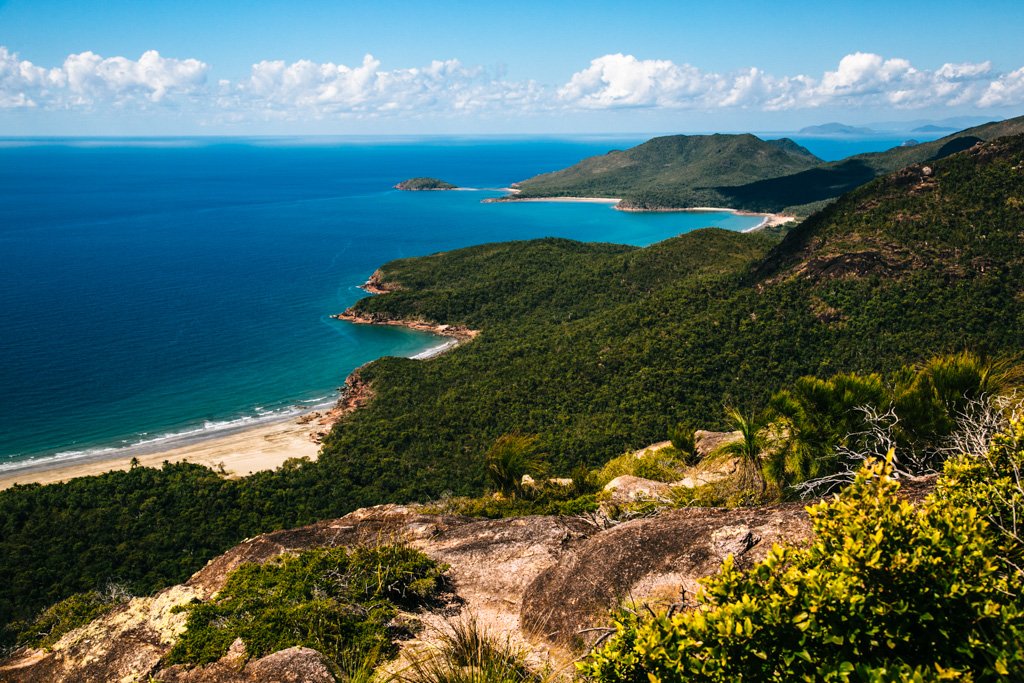 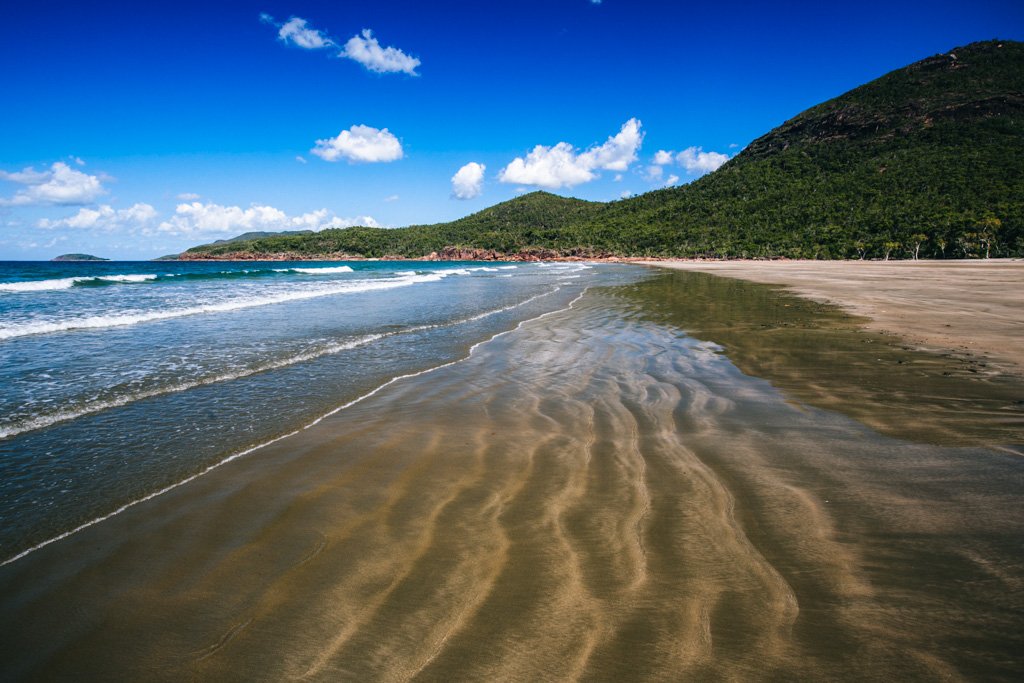 At the south end of Nina Bay begins the rock scrambling portion of the day’s hike. If you’ve never rock climbed before, you may want to take your time on the rocks to ensure you find the proper holdings. And if you have climbed before, then you’ll likely have no trouble hopping over rocks on Hinchinbrook Island. 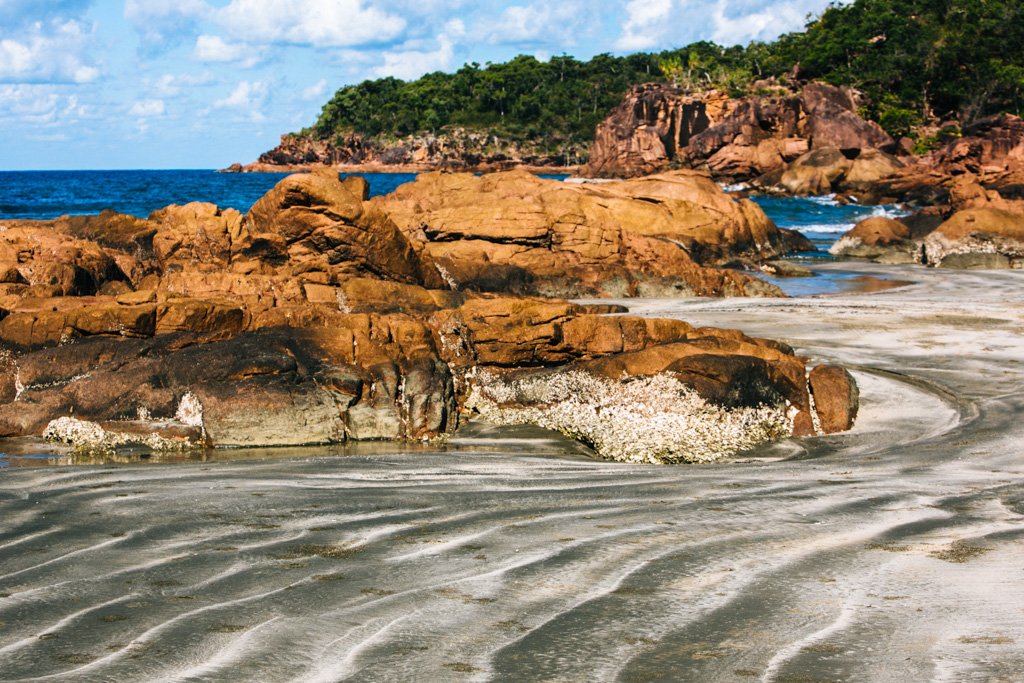 Our reward for surviving the first day on the Thorsborne Trail? Dehydrated spaghetti bolognese and campsites nestled between the beach and this lagoon. My favorite night camping was this first one, at Little Ramsay Bay, where I watched the sunset over the lagoon, then woke up the next morning to watch the sunrise light it up from behind. 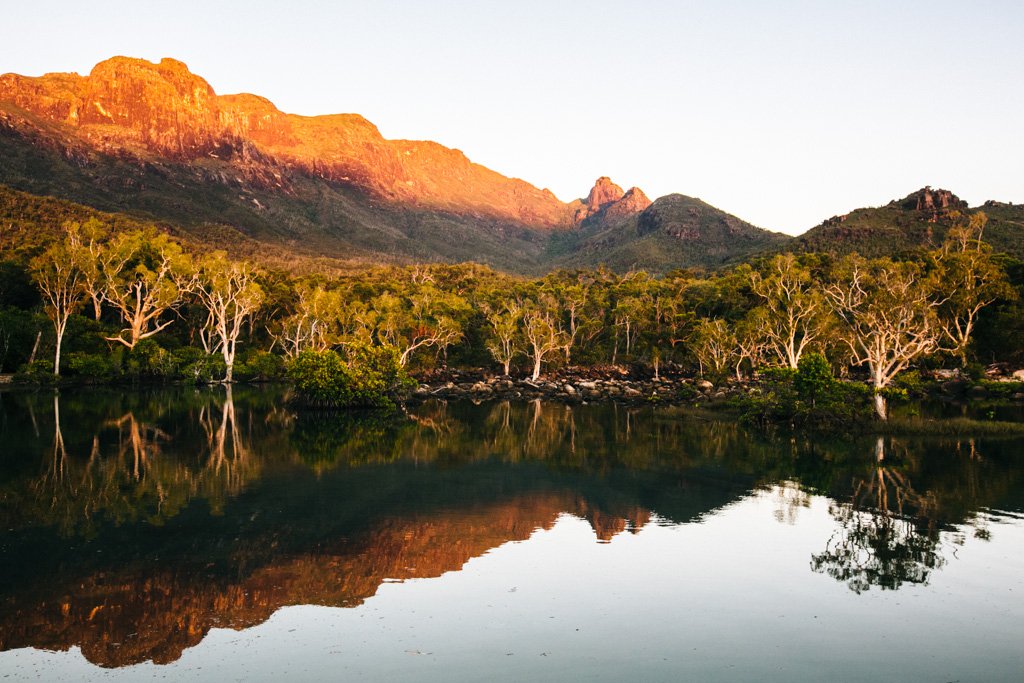 Day 2 on the Thorsborne Trail calls for several creek crossings, rock scrambling, and more uphill trekking. Most of it is inland rather than along the coast, but there’s a swimming hole along the way that you can jump in to cool off. 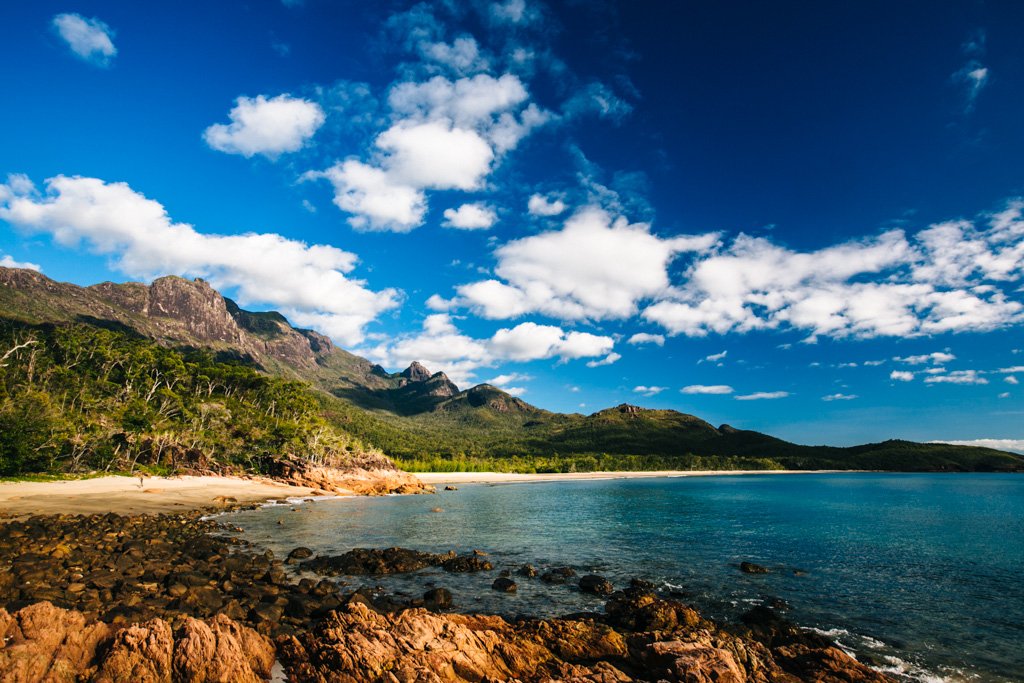 The day’s hike concludes at Zoe Bay with a lengthy trek across the sand to the campsites on the south end. I loved how there were a few separate camping areas here: great for privacy (or escaping the snorers in your group!). 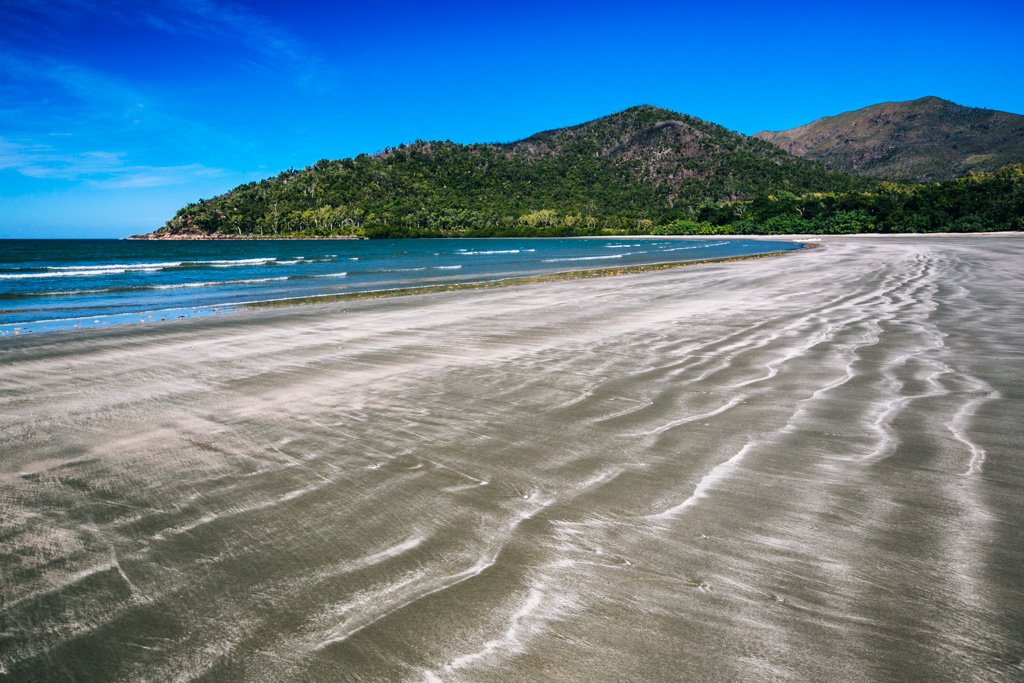 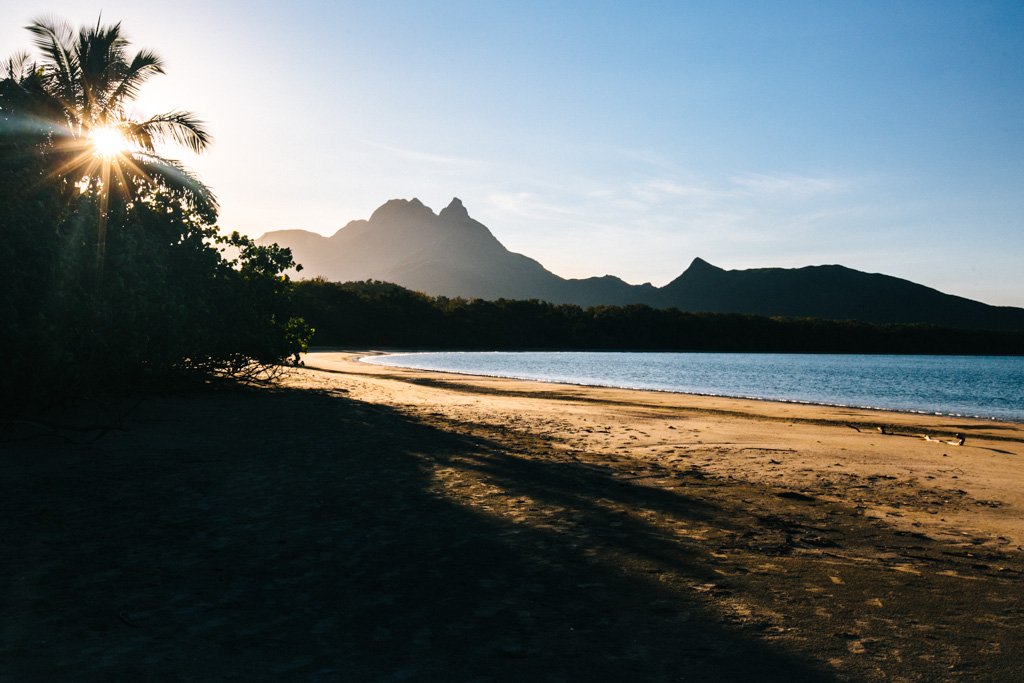 While the other journalists were digging into their freeze dried nasi goreng, sharing a goon sack, and passing out before 8pm (honestly, no judgment – Day 2 was a doozy!), I took my camera out for an evening spin on the beach. Sunset reflected in the low tide, followed by stargazing in the sand – Hinchy, you slay me! 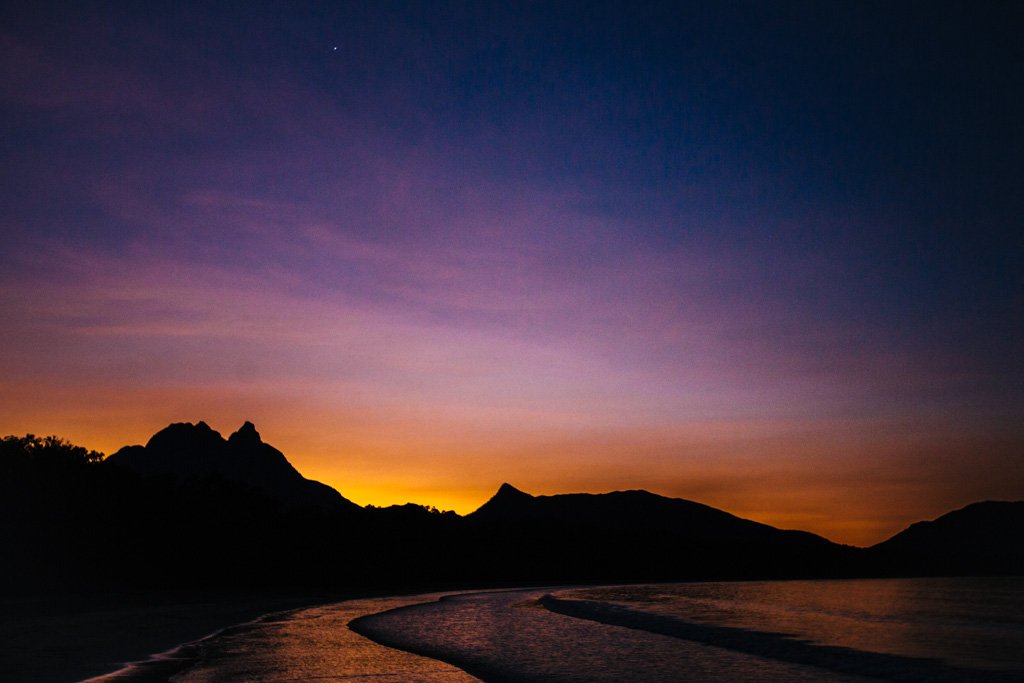 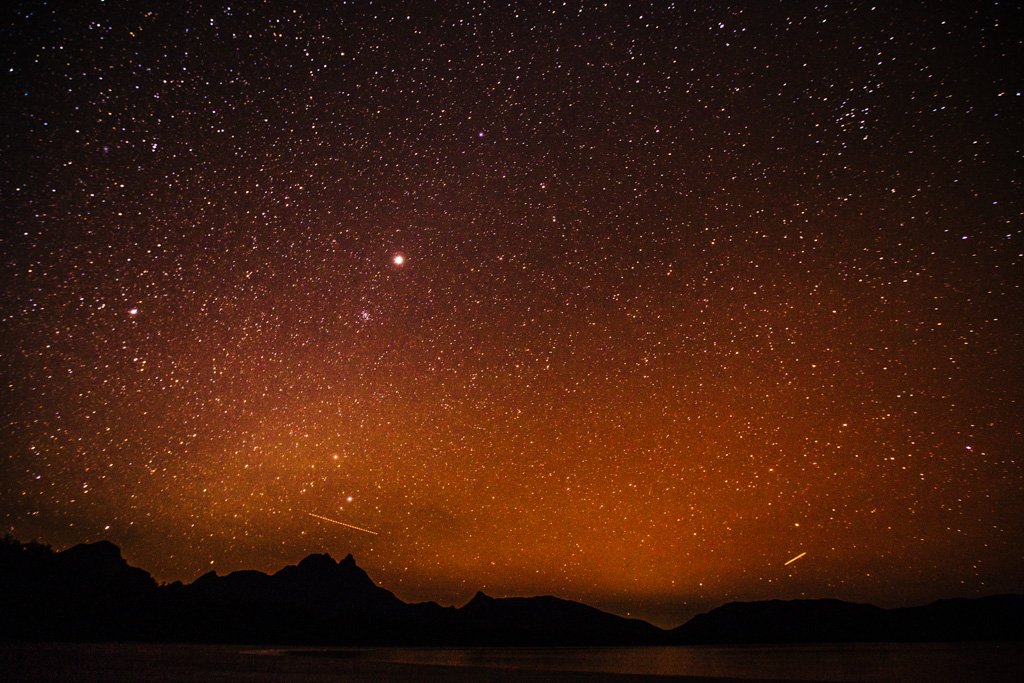 Zoe Bay’s a stunner in the morning light, too, dontcha think? 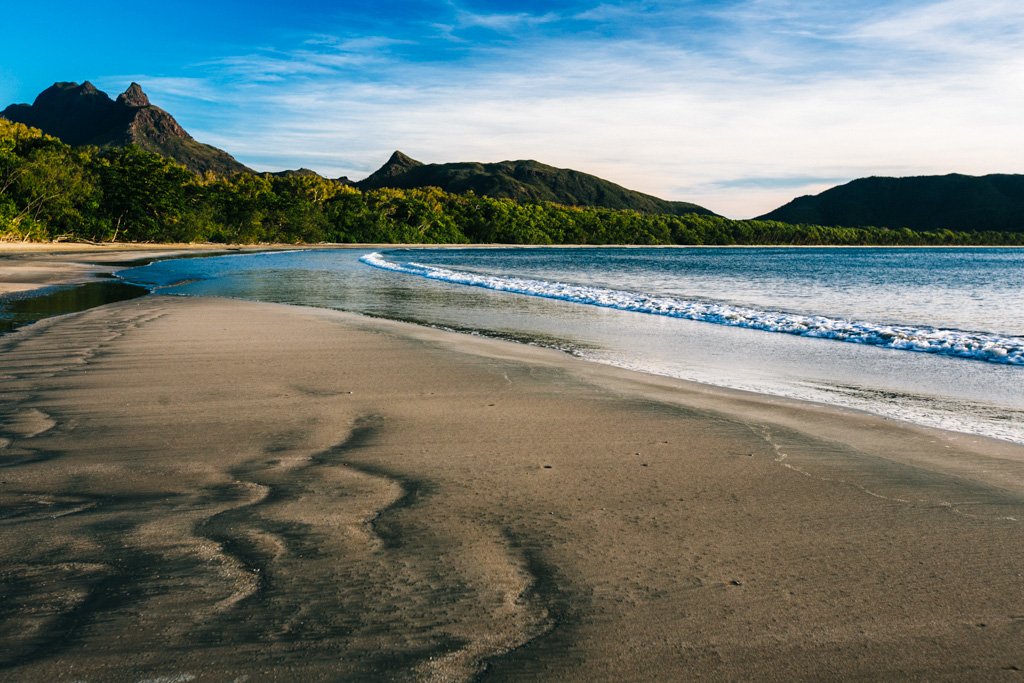 A 15 minute hike into the woods leads to Zoe Falls, which flow into a wonderfully serene (and refreshingly cold!) swimming hole. I recommend waking early to start the day’s trek so you can spend more time relaxing here before carrying on. 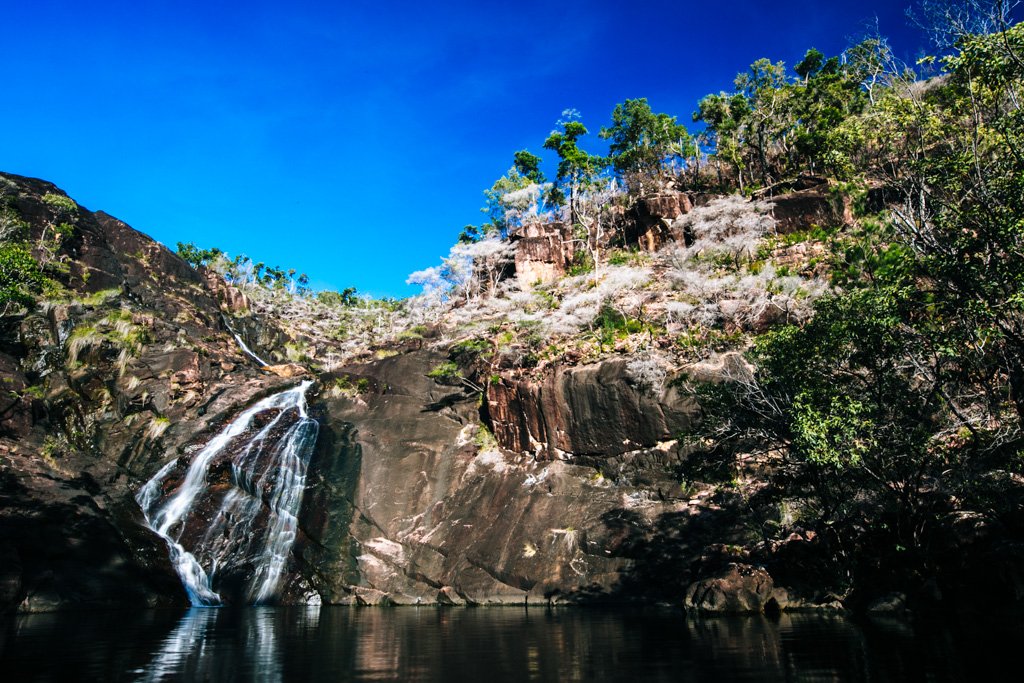 The view from atop Zoe Falls is well worth the steep climb. From here, you can look out over Zoe Bay while lounging in a rock pool just over the edge. One word: EPIC. 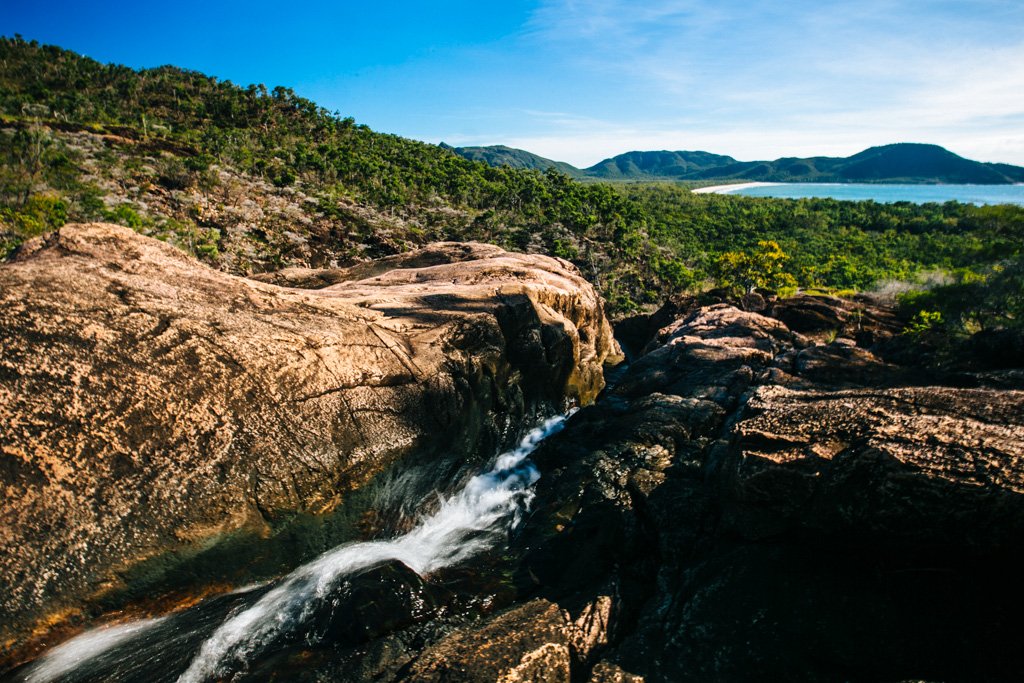 Day 3 of the Thorsborne Trail is easier than the first two days. After Zoe Falls, the trail is mostly exposed as you cross the saddle and head back over toward the coast. Here, you’ll glimpse the Queensland coast and the nearby Palm Island group. 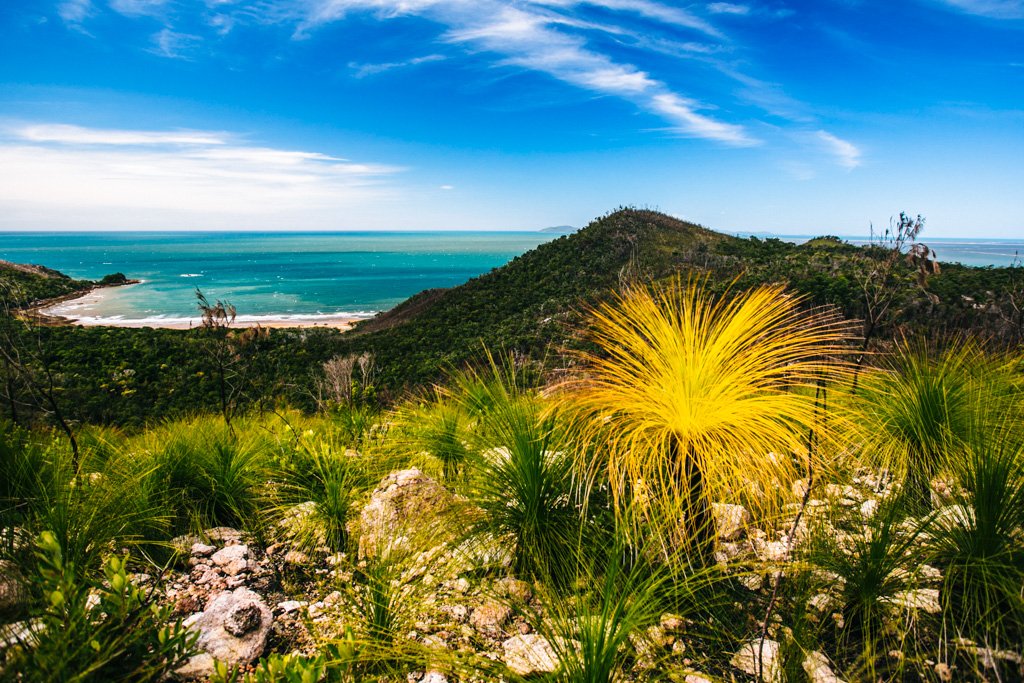 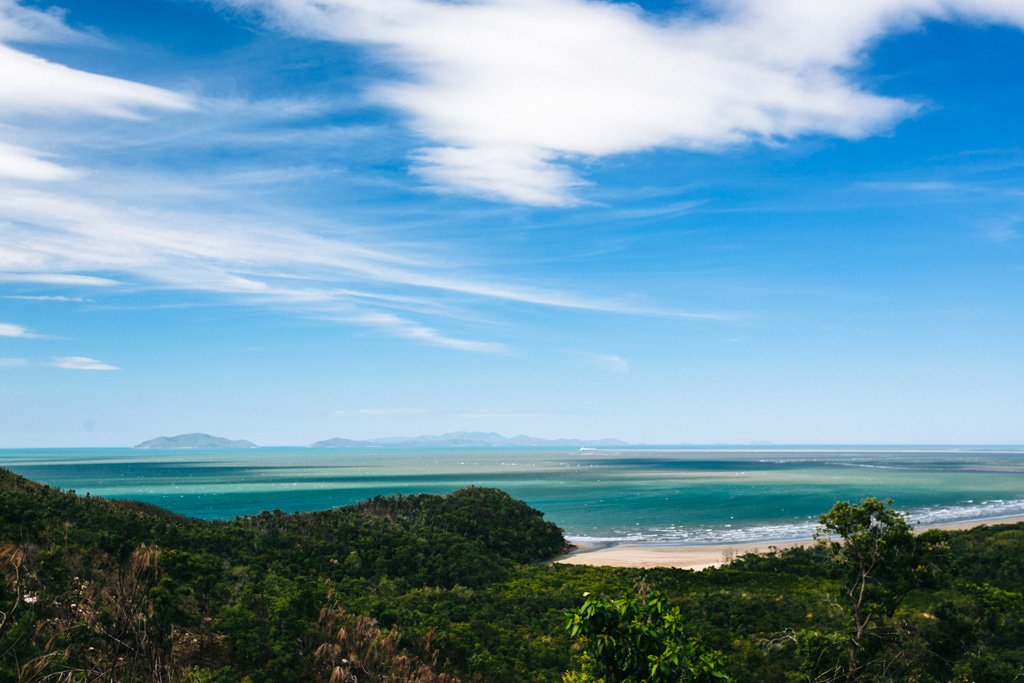 The trail soon plunges into the forest heading down toward Diamantina Creek and Mulligan Falls. Unlike previous nights, Day 3’s campsites aren’t on the beach; they’re nestled in a stretch of forest leading up to the falls.

Compared to Zoe Falls, I’d say Mulligan Falls is less impressive, but has a nicer swimming hole. There’s a massive boulder right in the middle of it, where you can sit or lay and look straight at the falls. Just be wary of the tree snakes that have taken up residence in the surrounding rocks here! 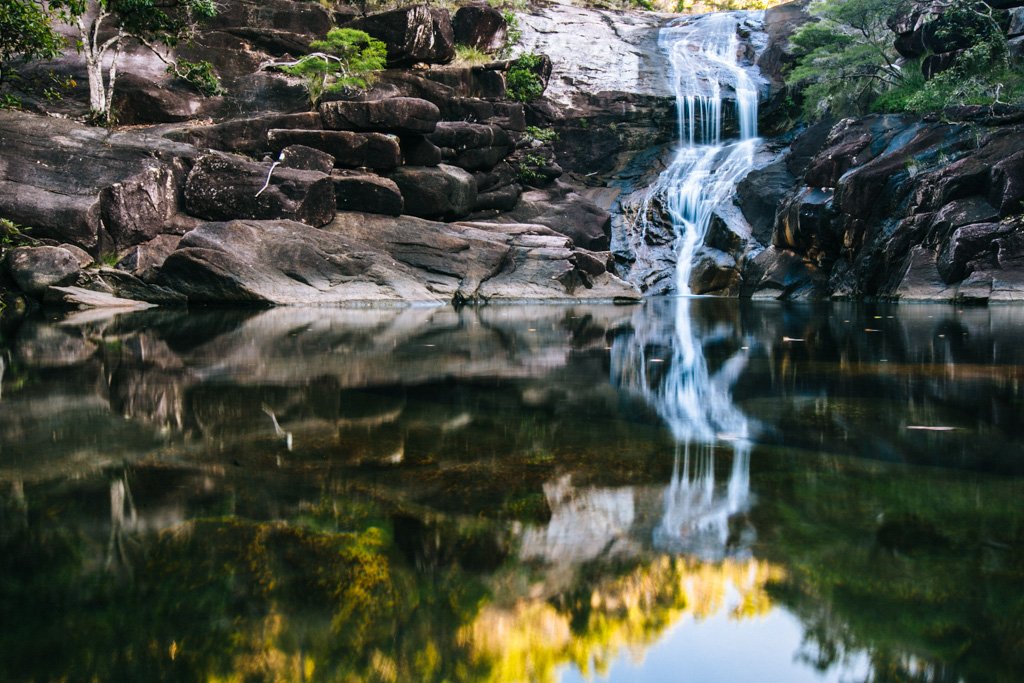 Day 4 of the Thorsborne Trail is ridiculously easy: it’s just a couple hours walking through flat forest and then across Mulligan Bay beach. If you like long walks on the beach like I do, you should enjoy this 4km stretch of flat sand. The finish line is at Georges Point, where we caught our boat to Lucinda on the mainland. 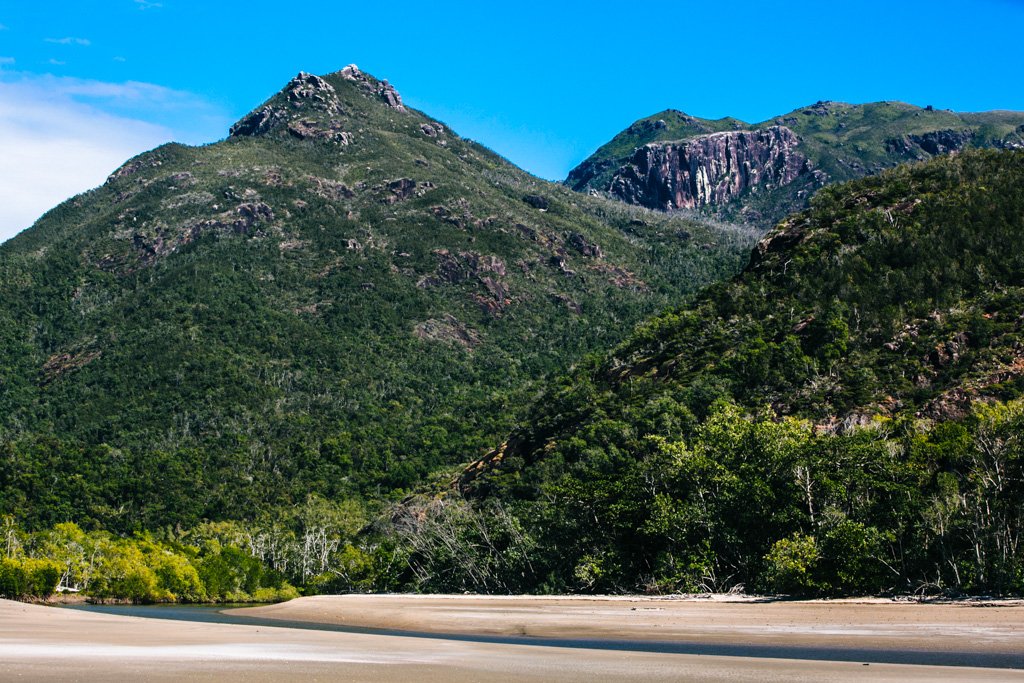 Thank you to Matador Network and TEQ for hosting my stay in Queensland and on the Hinchinbrook Island trek. As always, all opinions expressed here and elsewhere on this blog are my unbiased own, and are uninfluenced by any gifts or incentives I may receive. 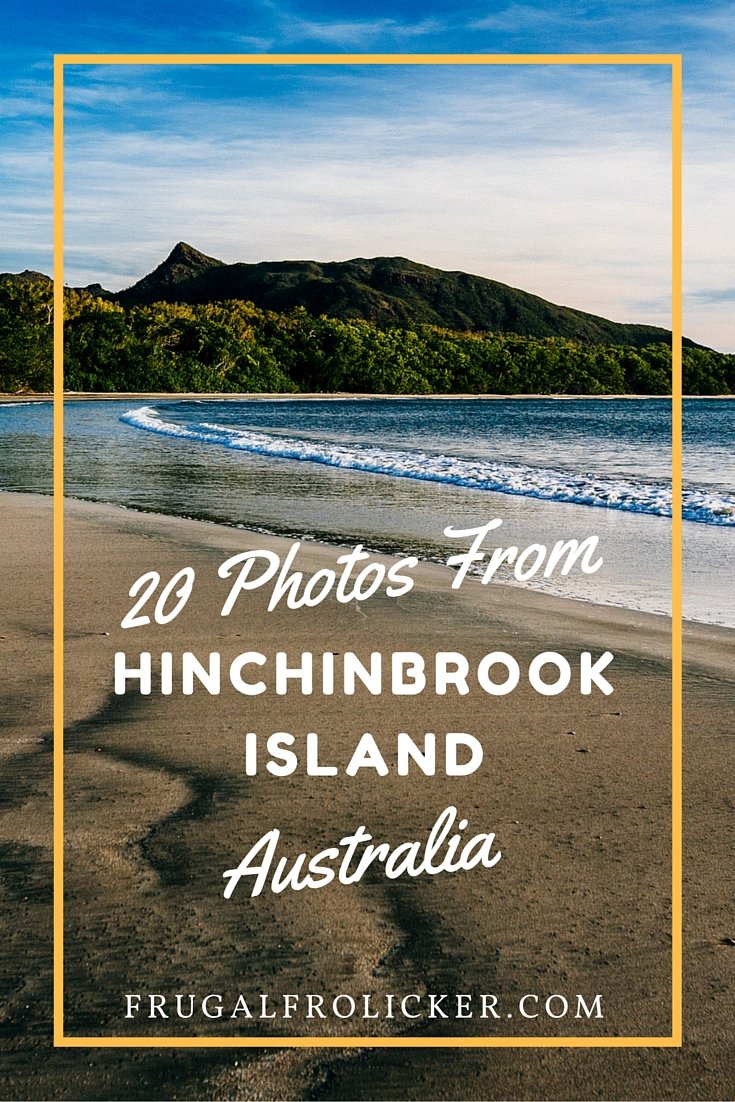 Tags: AustraliabeachHinchinbrook IslandislandQueenslandSponsoredtrek
Previous ArticleBingeing on Beaches and Wine in Southwest Australia
Next Article Unleashing My Inner Barista In Melbourne