Fresh off a year where I got to frolic on countless Aussie beaches, and a week where I was surrounded by the iconic rice fields in Ubud, I wasn’t quite sure which type of beautiful landscape I was seeking next. But when some casual research on hiking in Java revealed a crater into which you can hike and see electric blue flames after dark, I didn’t have to think twice before plotting my next move.

Seeing blue fire on the Ijen Crater hike around sunrise was an incredible, exhausting, and slightly scary experience. Read on to see how I did it, and how you can make the trek there as well. 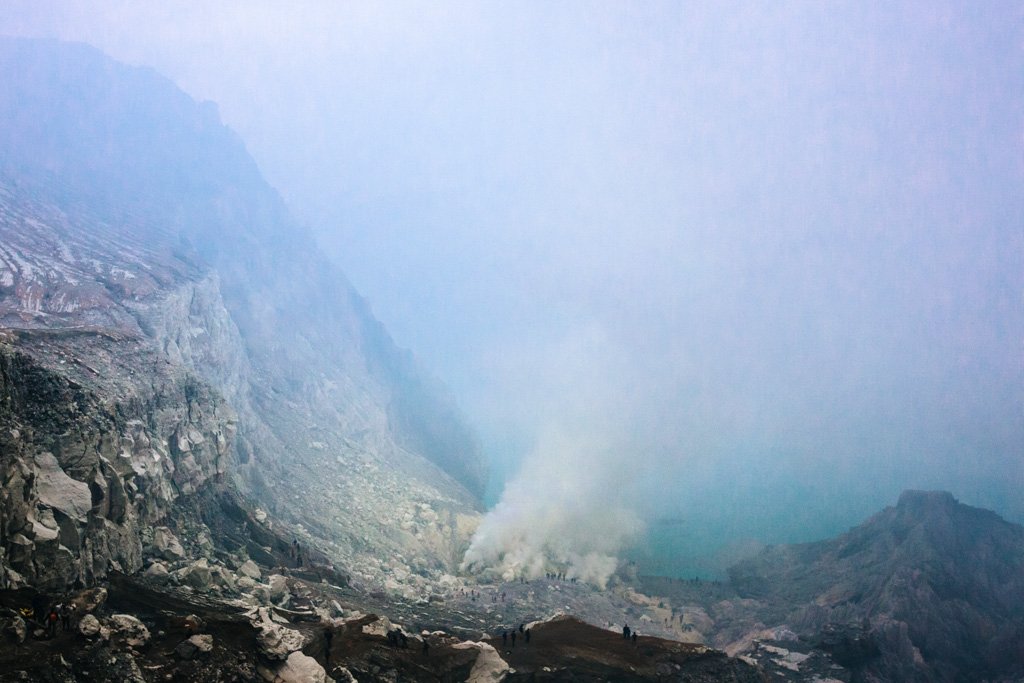 Options For The Kawah Ijen Hike

Ijen Crater is on the eastern end of the island of Java, in Indonesia. It’s totally doable as a side trip from Bali without having to traverse Java: you’d simply take a bus to the border (likely from Denpasar), take a quick ferry ride to Java, and then a taxi into Banyuwangi.

There are two routes you can take to reach the Kawah Ijen hike:

While the Ijen Crater hike is typically done at sunrise, you can also choose to hike it at sunset because the blue flames are visible as soon as it gets dark: 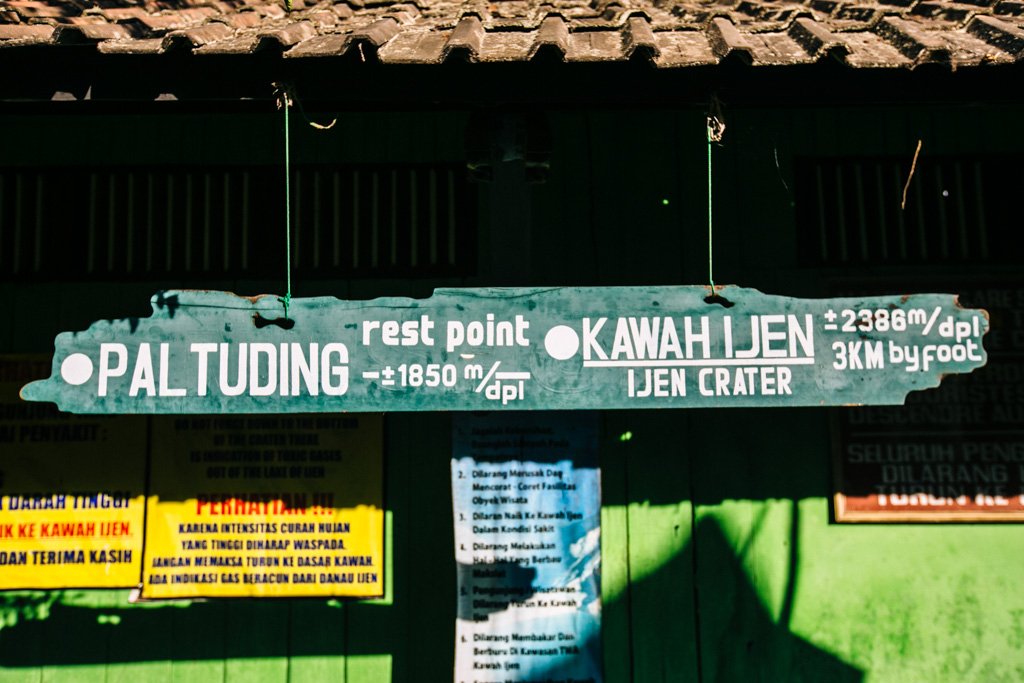 In the Choose-Your-Own-Ijen-Adventure game, I elected to trek up to Ijen Crater from the east side because I always prefer to minimize transfers and make the uncomfortable business of schlepping a little less difficult whenever possible. Taking a direct train from Surabaya to Banyuwangi was immensely easier than the multiple bus transfers required to summit from the west side, and it was absolutely the right decision for me.

I opted to hike in for sunrise because I thought that was the only option, but if I were to redo this experience I definitely would have done it at sunset instead. I’m regrettably not a morning person, and being up and about too early on too little sleep makes me nauseous.

My hotel in Banyuwangi offered all-inclusive transfers to Ijen Crater for 250,000 rupiah (US$18): this included roundtrip transfer in a Jeep, the entrance fee (normally 100,000 rupiah), and use of a surgical mask to combat the fumes in the crater. The driver waited for us in the parking lot by the trailhead while we hiked in and out and then drove us back into town.

While I had intended to do the whole thing independently, it was easier and cost about the same doing it via the hotel’s package. I’m especially glad to have been able to doze off in the car both there and back, which I wouldn’t have been able to do on the back of a motorbike on a bumpy/winding road if I’d hired an ojek instead. Also worth noting: I didn’t notice any ojek drivers looking to take passengers back down to town from the parking lot afterwards, so I’m not sure how I’d have made it back without having my ride pre-booked. 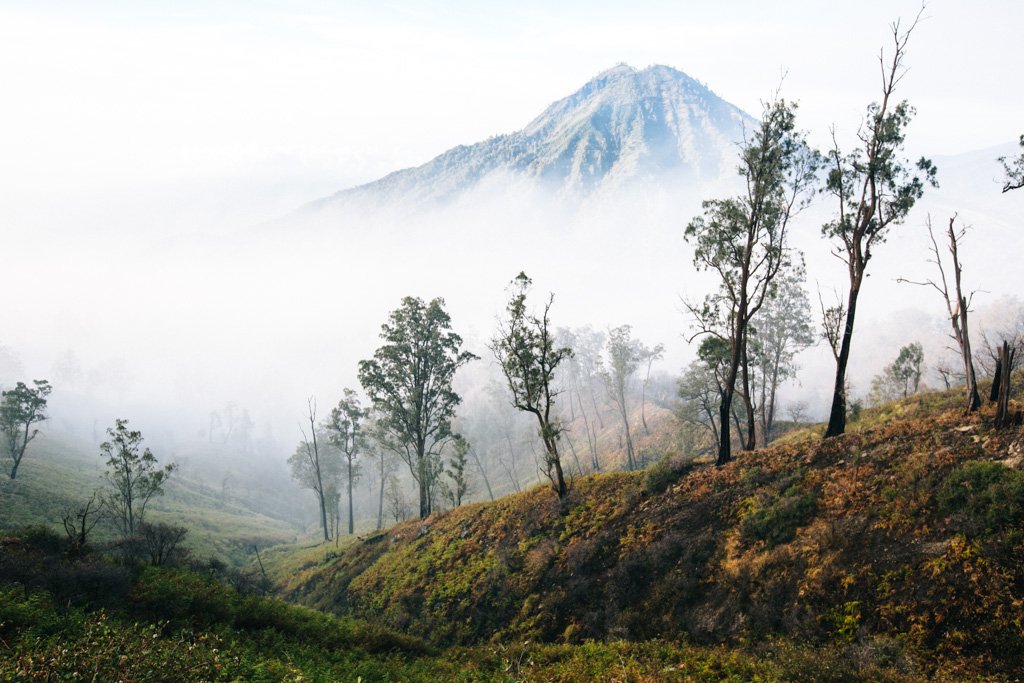 We left Banyuwangi at 1am and arrived at the Ijen parking lot around 2am (maybe slightly later). The driver walked us over to the entrance, paid our entrance fee, and off we went!

I kept pace with the French guy I drove in with for maybe 20 minutes before deciding it was a ludicrous speed to maintain if I wanted to keep puking off my early-morning agenda. I pulled over off the trail several times: to de-layer, to hydrate, to catch my breath. You know I love hiking, but not on a tight timeframe – and certainly not at the ultimate ass-crack of dawn. Whenever I heard my fellow hikers ponder whether they’d make it in time to see the blue fire at Ijen Crater before it got too light out, I cranked it up a notch and surged forward.

Incredibly, I made it to the top of the crater in about an hour (they say to allow 1-1.5 hours), though it felt like I was hiking for much longer than that. Hiking in the dark, up a stretch of never-ending hills, on just a few hours of sleep was disorienting for me. I had no concept of time or location until I saw the miners with their baskets at the top. If you’re not a morning person, get spooked by the dark, or aren’t fit, I’d highly advise trekking to Ijen Crater at sunset instead. 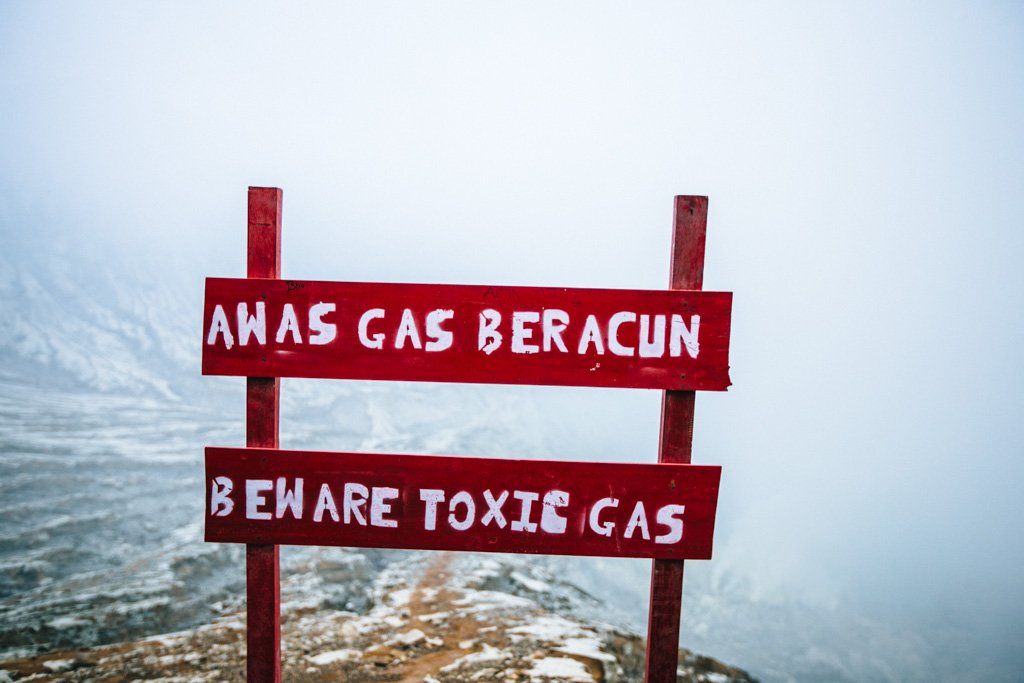 THIS IS NO JOKE. 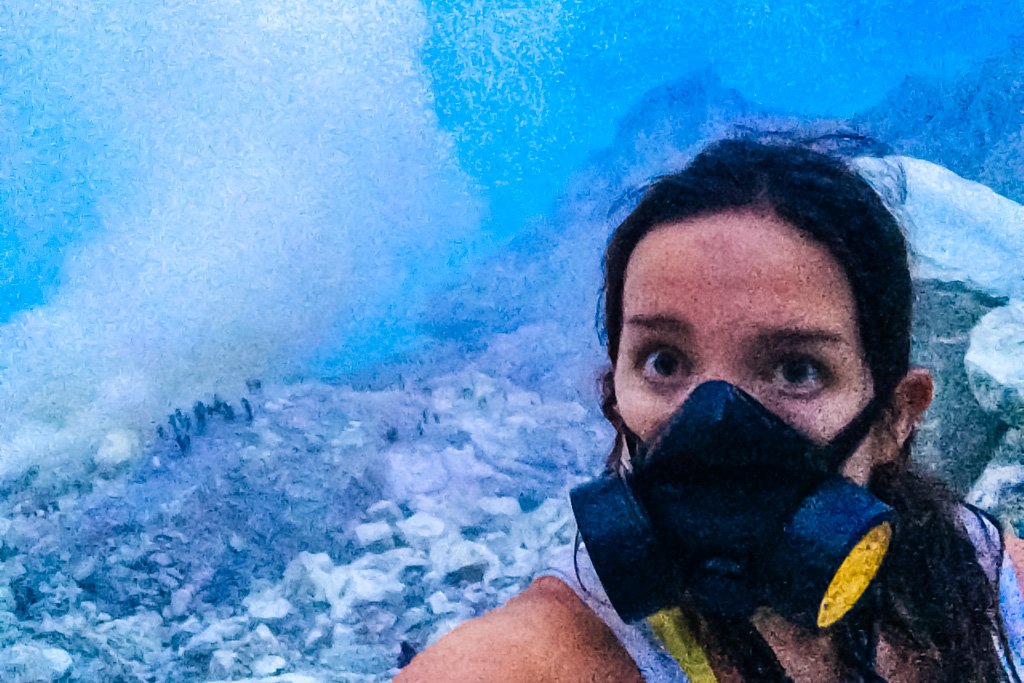 Around 3:15am, I slid a gas mask over my nose and mouth and started descending Ijen Crater. This mask was a complete game changer – do not hike into the crater without one! The sulphur fumes are strong, putrid, and just not good for your lungs. The mask was included in my hotel transfer package, but I believe you should be able to rent one at the trail entrance when you pay your admission fee.

Before I saw the Kawah Ijen blue fire or any views, I passed by miners walking out of the crater carrying baskets of sulphur that they’ll sell for less than 5 cents a kilo. Some also guide tourists down to the blue flames or sell little sulphur trinkets to passers-by, to supplement their meager wages. I felt like such an entitled foreigner traipsing into their workplace for “fun” while these guys were putting their bodies through hell on a daily basis and making so little money for it. I hardly took any pictures of them because I just felt so bad. 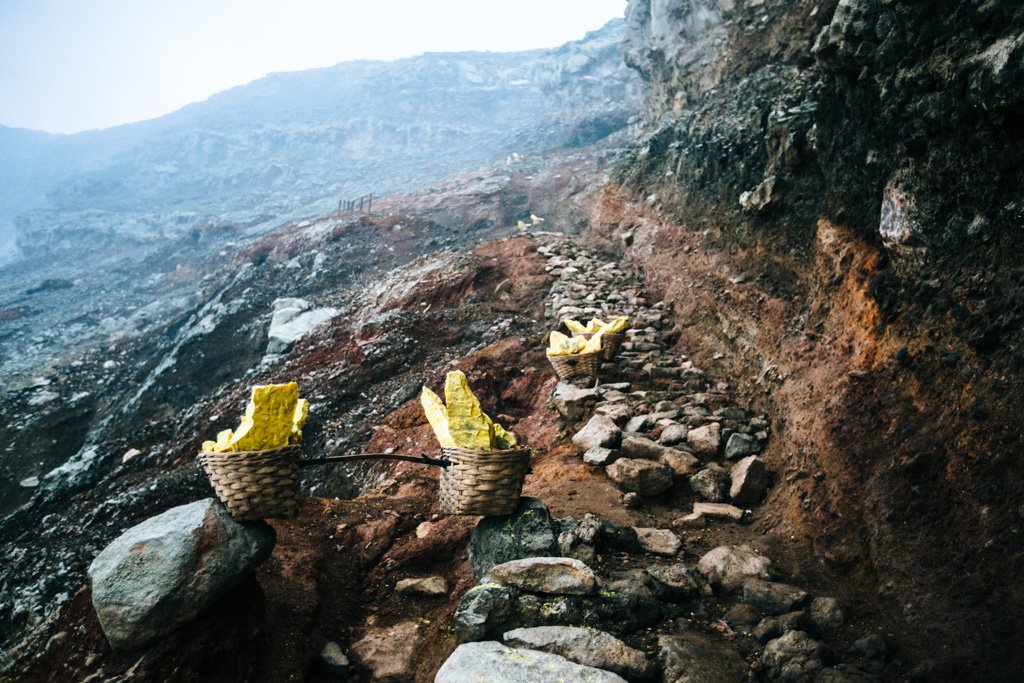 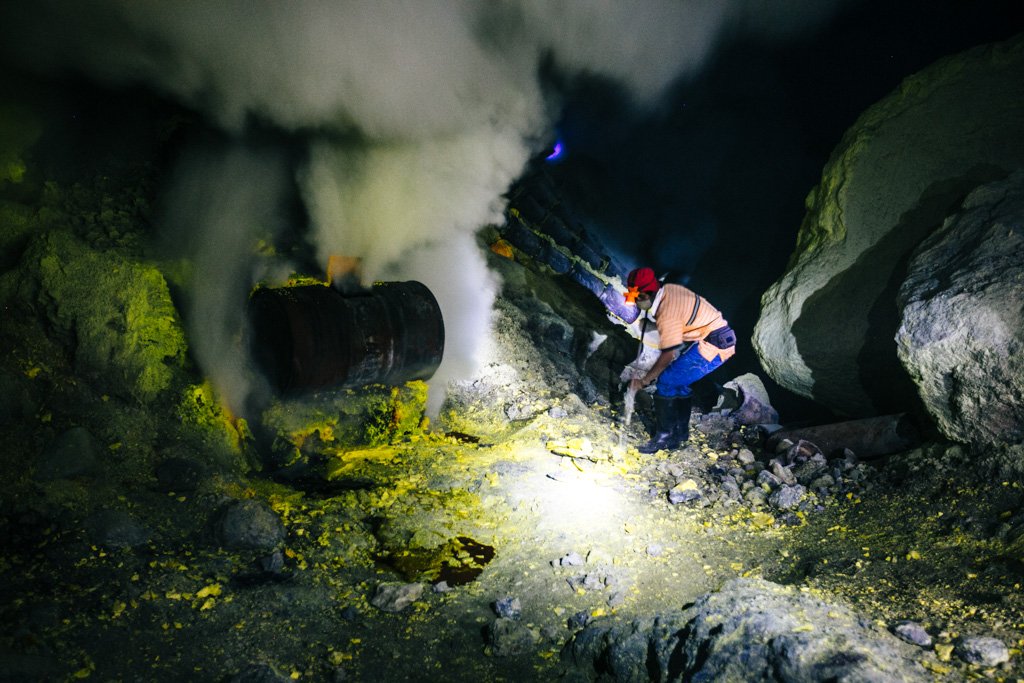 Once at the bottom of Ijen Crater, I followed some hikers up and around the mining area on the left side and they introduced me to the blue flames. I cautiously approached, turning away and shielding my face whenever the sulphur fumes blew in our direction and temporarily reduced visibility. It was very much like weathering a storm. There was one gust so strong that it knocked me over and left me gasping for air. Seriously, guys: wear a gas mask!

When I finally reached the edge, I saw this: 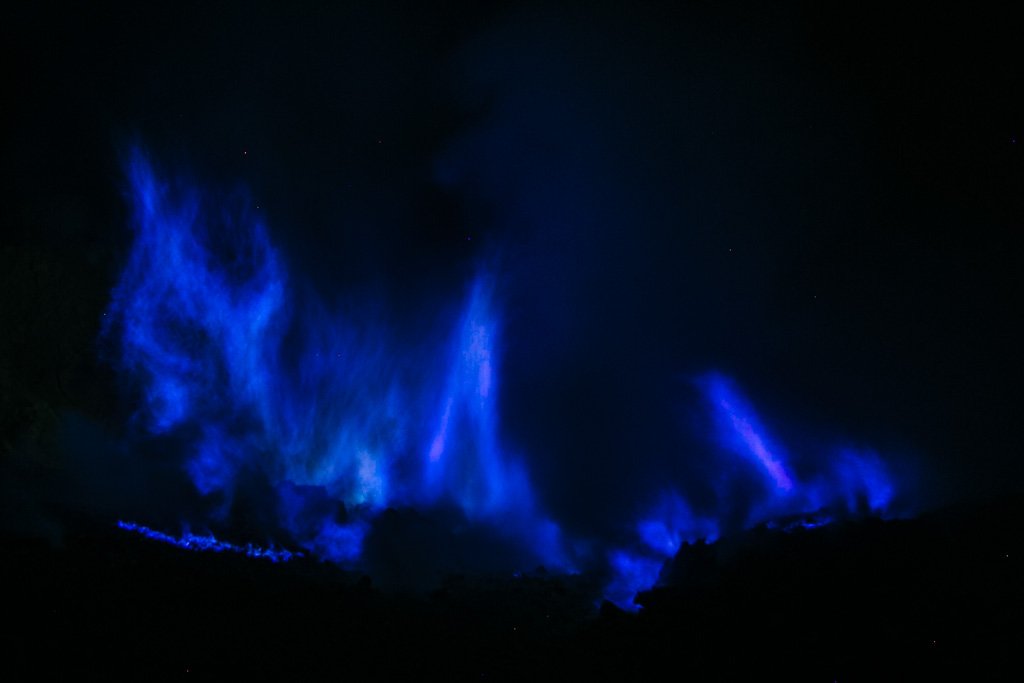 The blue flames actually aren’t lava, but rather result from sulphuric gases igniting upon making contact with air.

I mean, holy #^*&$ is this for real?! I know I’m guilty of having referred to some other places as being “other-worldly” or “like being on another planet”, but nothing I’ve seen thusfar compares to having electric blue flames just a few feet in front of my face.

You’ll want to limit your exposure to the sulphur fumes – I’d recommend an hour, tops, before climbing out of the crater. Go in with a plan: get up close to the blue flames, then climb up the little hill nearby to catch a glimpse of the green crater lake. I almost missed this lookout point and only decided to follow someone else up there on a whim while making my way out. Don’t miss it! 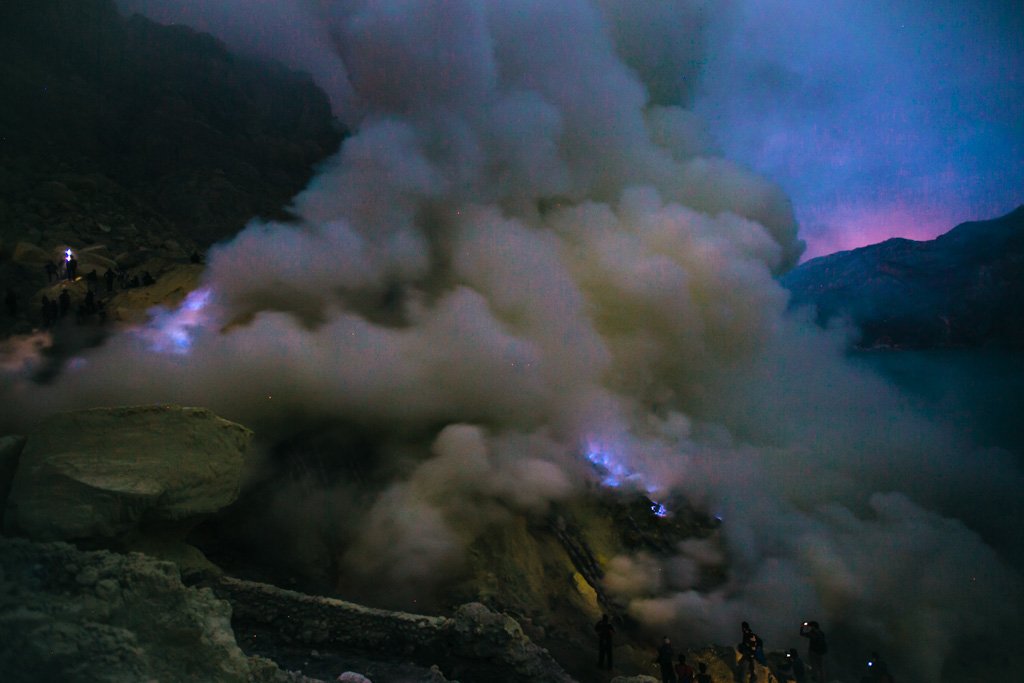 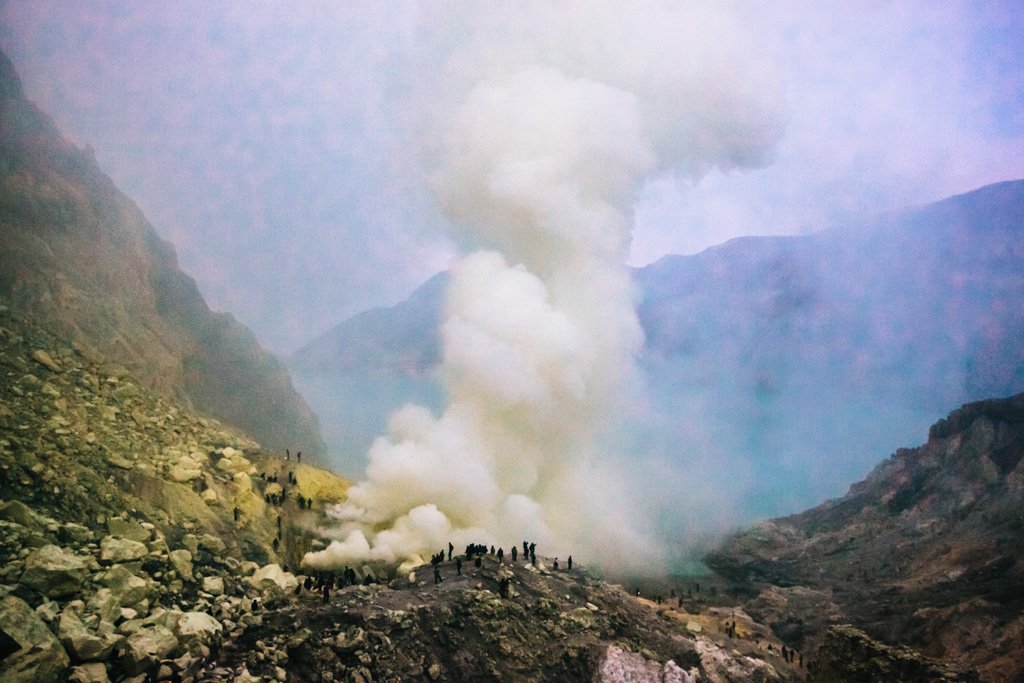 It was about 4:30am by the time I climbed the hill and took this shot (thank you, image timestamp), with the blue flames still visible and the darkness starting to fade. I recommend starting the climb out of the crater by 4:45 if you want to catch the sunrise from above.

On second thought, consider hanging out on that hill and waiting for sunrise if you can handle a little more time breathing in the stinky air. While I was able to see the lake from here, I couldn’t see it at all from the top because it was all fogged (smoked?) over. I sat on the crater edge for a good half hour waiting for it to clear, but it never did. Total bummer! 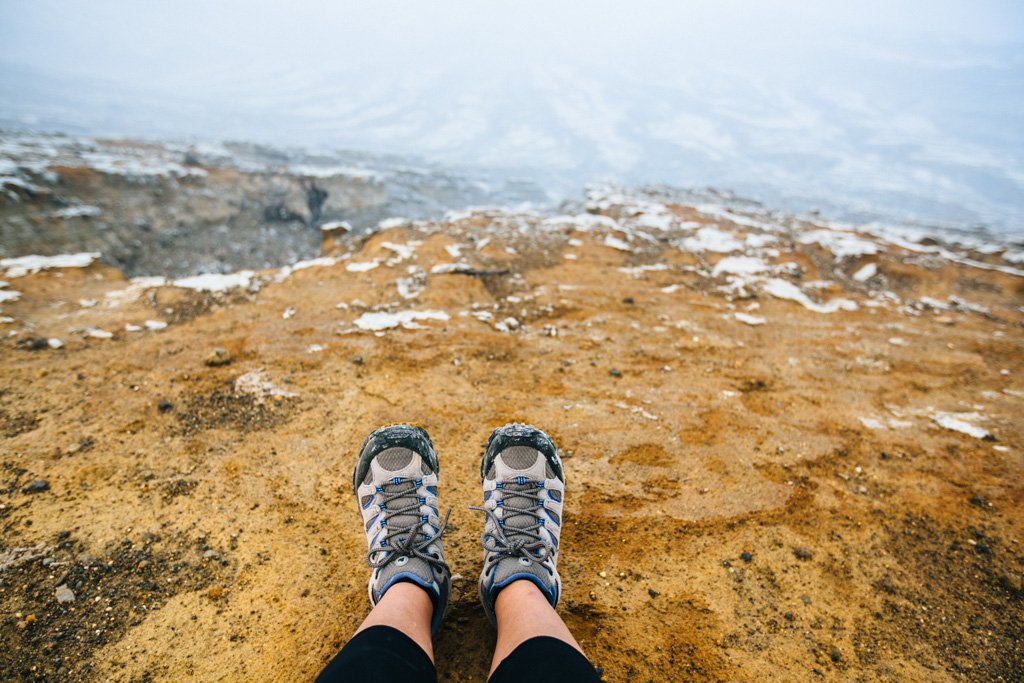 At least I got to break in my new Merrell hiking shoes on this trek. They are SO COMFY.

I was pretty bummed to have missed an epic sunrise over the crater lake, but the walk back down was glorious. The surrounding land was lit by golden light and painted with mist, making for an ethereal scene in the mountains. Just lovely. 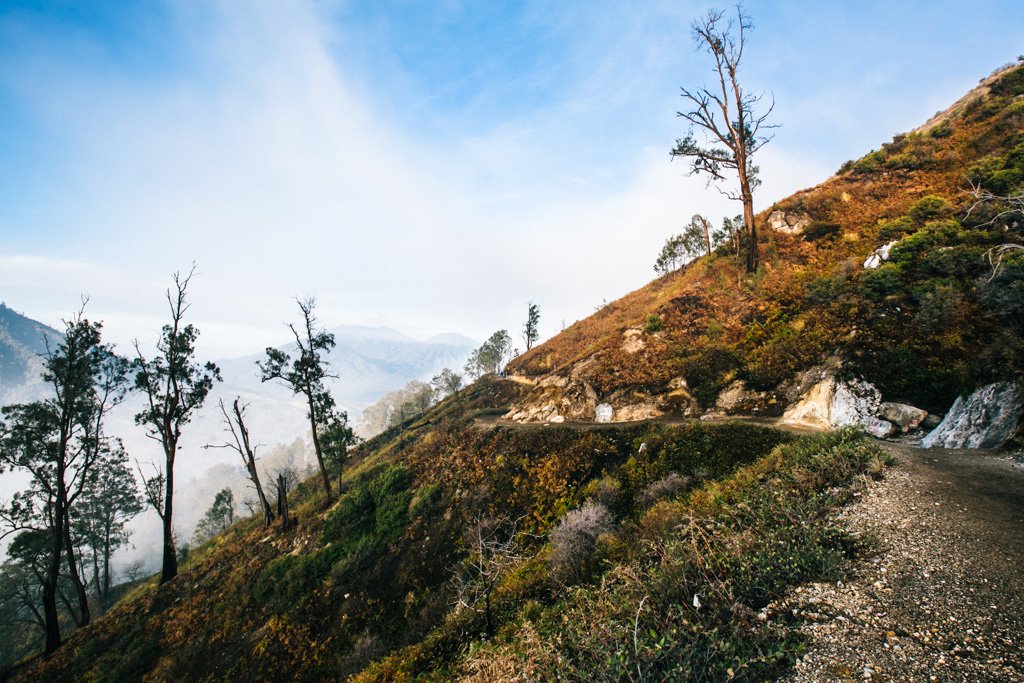 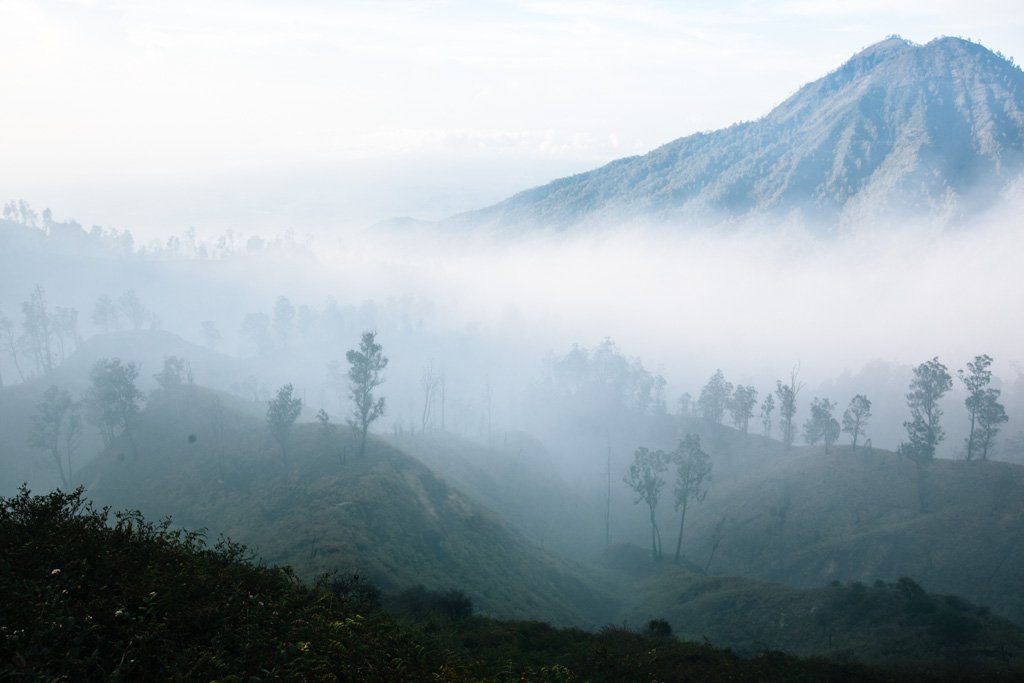 So, was it worth the exhaustion, sweat, early wakeup call, fumes, and effort? Totally. Kawah Ijen is unlike most any other hike you could possibly tackle, so if you love hiking and find yourself in Java or Bali – DO IT.

See also: All the things that went wrong on my Ijen Crater hike (and in Java) 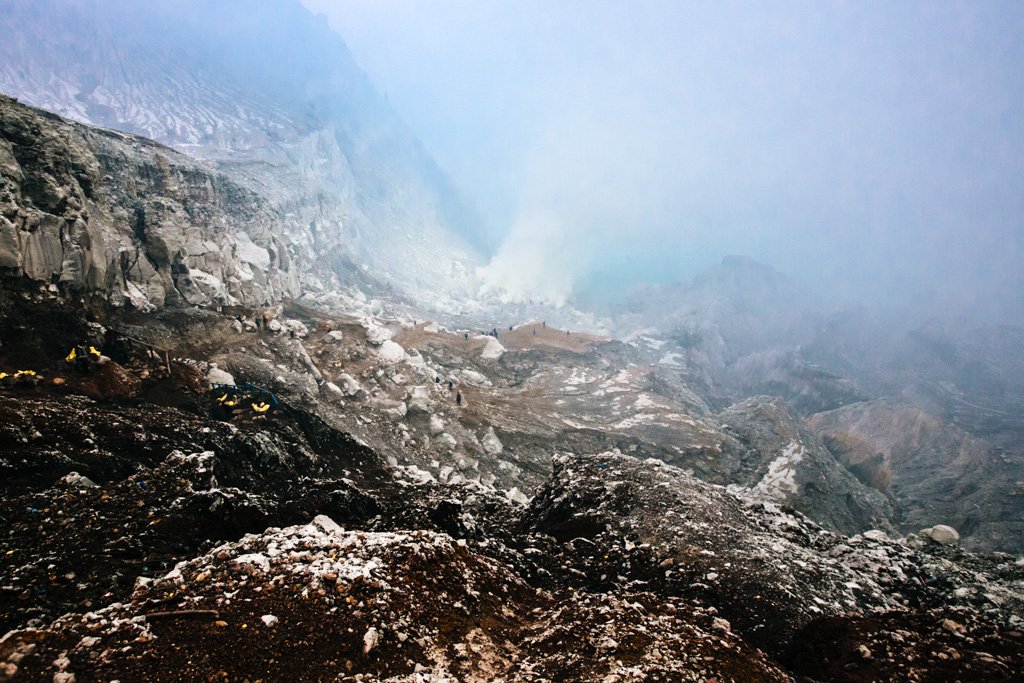 Tips For The Ijen Crater Hike 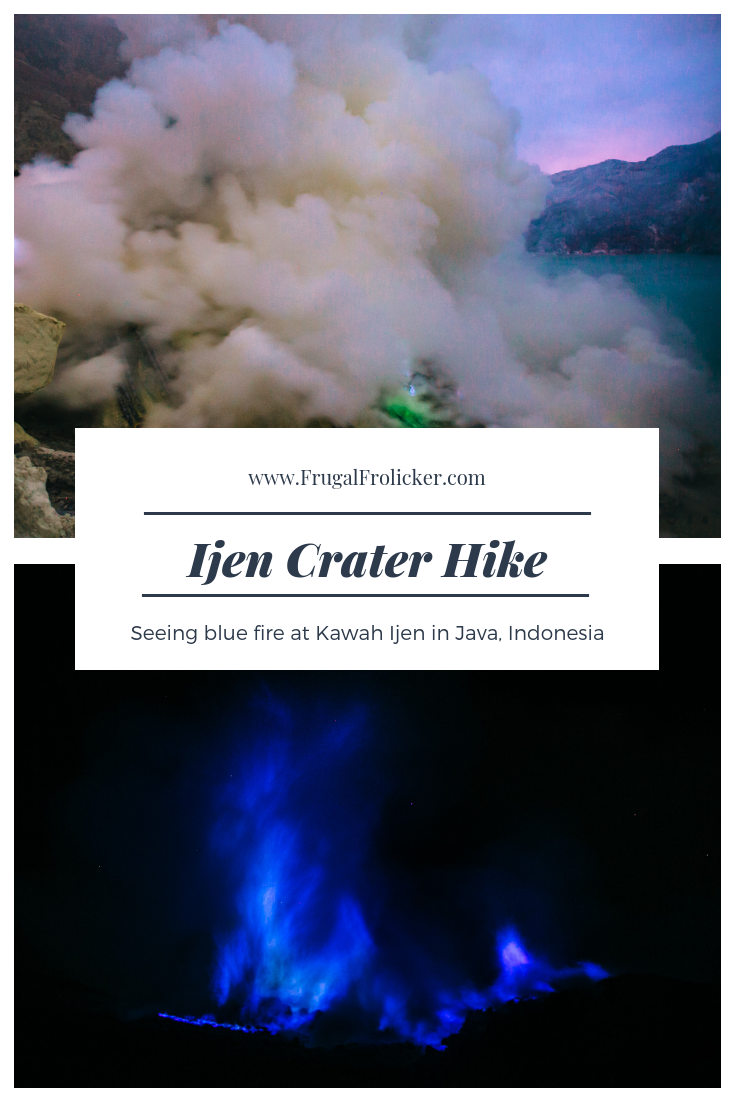