I recently spent two weeks in April on the Fleurieu Peninsula doing little more than beach hopping and wine tasting, which TBH is exactly what you should do when you’re here. This region offers up some of the best beaches and wine in all of Australia… which says a lot, given that the country is known overall for its excellence in both of those categories.

I hardly drink at all these days, so I could barely last for one full tasting session – thus, my sampling of McClaren Vale wines was pretty limited.

My Fleurieu Peninsula beach explorations, though? Those were only limited by the weather (which unfortunately was cloudy and cool for at least 75% of the days, and often quite windy). Thankfully we were blessed with a few summer weather days despite it being the middle of autumn, and you’d better believe I made the most of them. 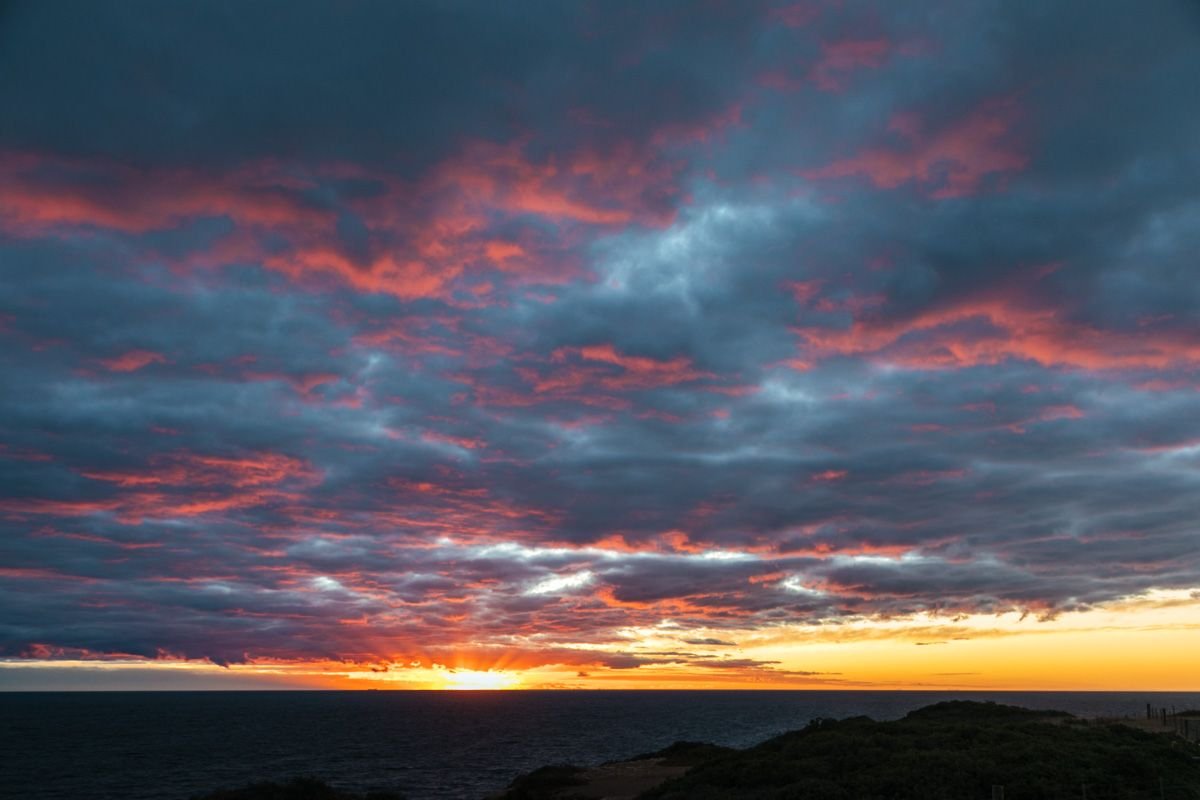 From north to south, here are the best Fleurieu Peninsula beaches (according to me, a self-proclaimed beach bum/snob as you’ve likely gathered by now!):

Southport Beach in Port Noarlunga was named the 8th best beach in Australia in 2020 (yes, all of Australia) – so I feel pretty good about including it as one of the best Fleurieu Peninsula beaches.

I don’t know if I’d rank it quite so high nationwide, but there’s no denying it’s a beauty. Its dramatic scenery smacks you in the face from the second you park your car along the esplanade. Clifftop picnic, anyone? 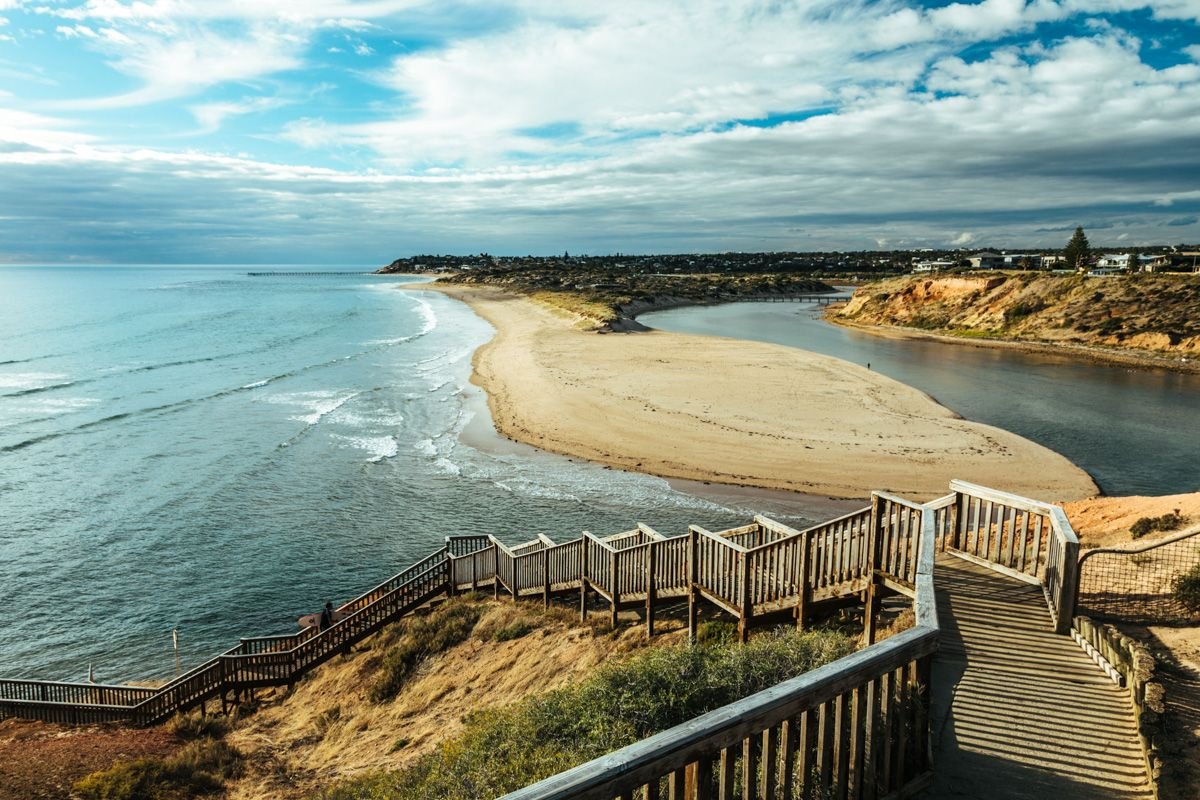 A long, winding staircase leads down to the beach, which is especially popular amongst surfers. But what really takes Southport Beach to the next level is the river flowing behind it, which is backed by vibrant cliffs on one side. The combination of rugged ocean beach and calm estuary makes it appealing to both surfers and paddlers, while swimmers of all comfort levels are accommodated for.

Next up is Australia’s first official nude beach, Maslin Beach. 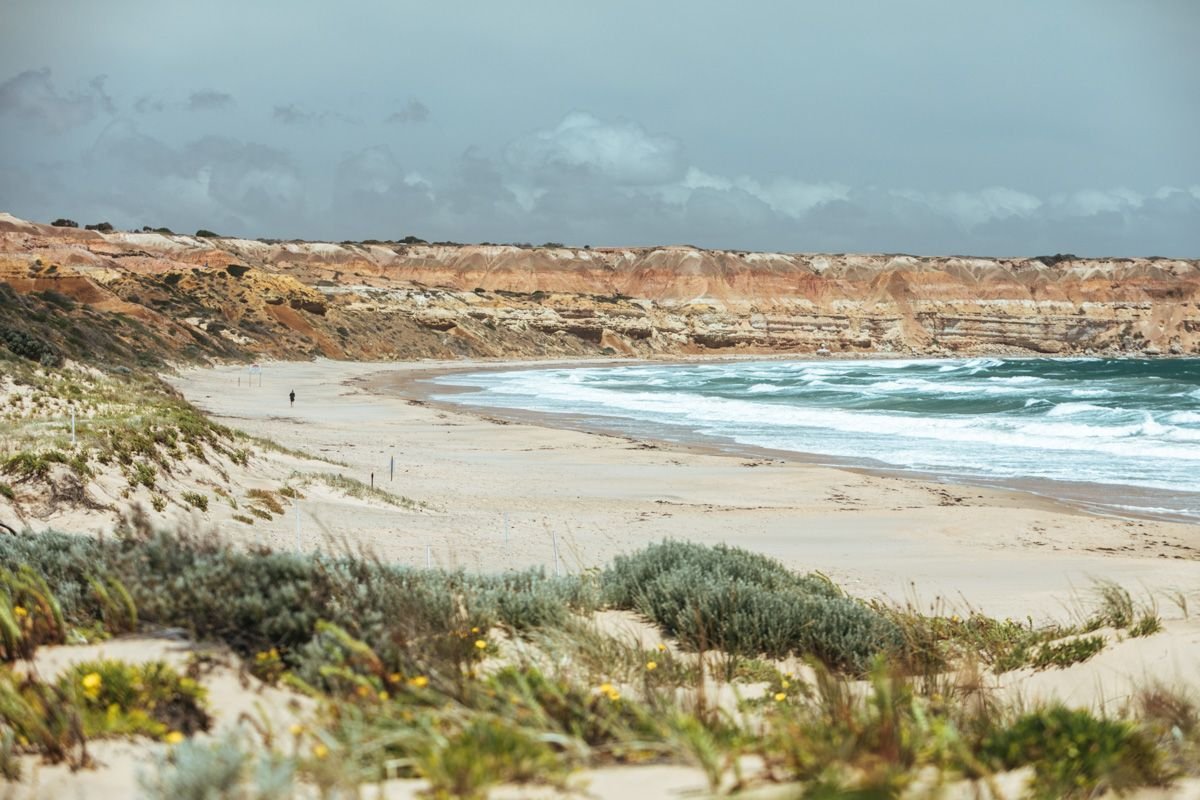 Unlike the nude beaches in Sydney, Maslin Beach is much less confronting: it’s 3km long and only the southern end is designated as the “unclad bathing” section, so you can easily avoid any nudity by staying further down the beach.

Though it must be said, the southern end of Maslin Beach is the most picturesque part! The undulating red cliffs are absolutely stunning, both from above and below. 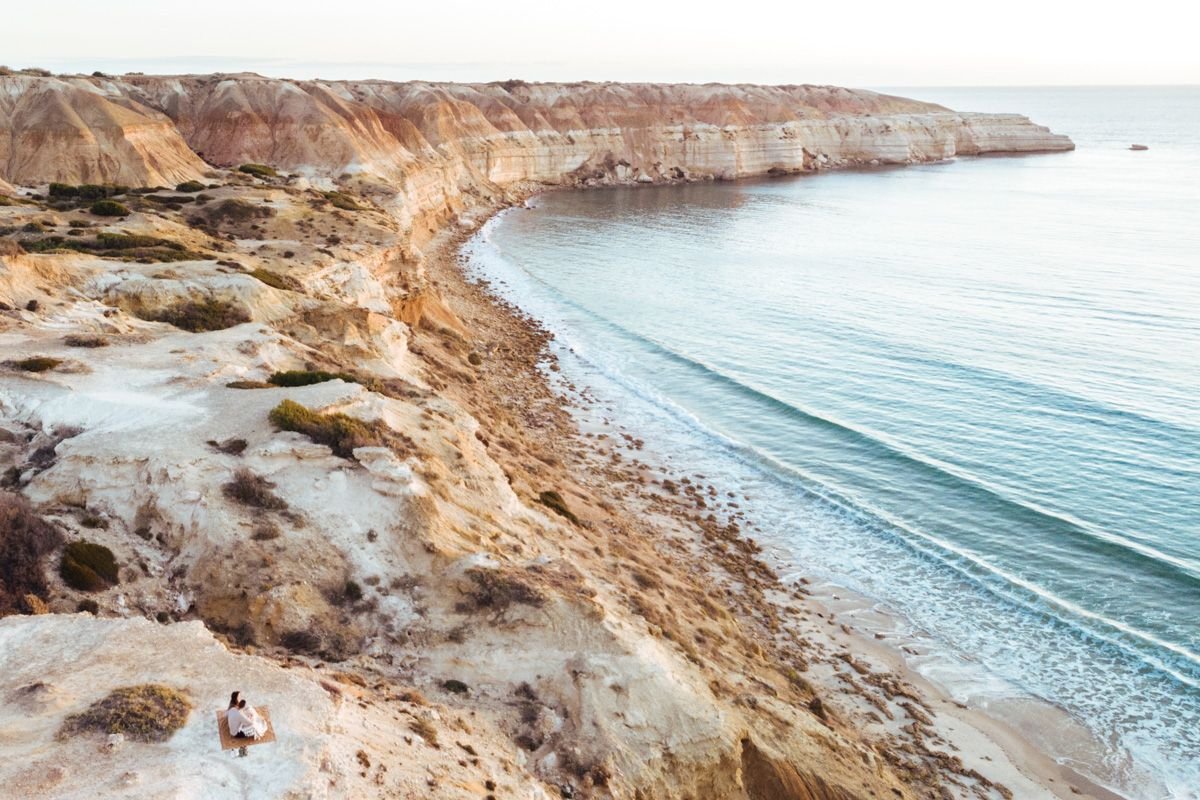 On my last visit to the Fleurieu Peninsula, I stayed just a few minutes down the road from Maslin Beach and made a habit of popping over here every other evening or so to catch the sunset from the cliffs.

It really is the perfect spot for a picnic: just park at the car park at the south end of the beach (off Tuit Road), follow the walkway with stairs leading down to the beach, hop off the path and there’s plenty of flat rock to sit on.

Just over the cliffs from Maslin Beach is the start of Port Willunga Beach, which is (unofficially?) divided into two parts.

The northern end stretches for about 1.5km and is accessible via a stairway from the car park at Blanche Point. There is another set of beautiful cliffs lining this part of the beach, very similar in look to the ones at Maslin Beach. 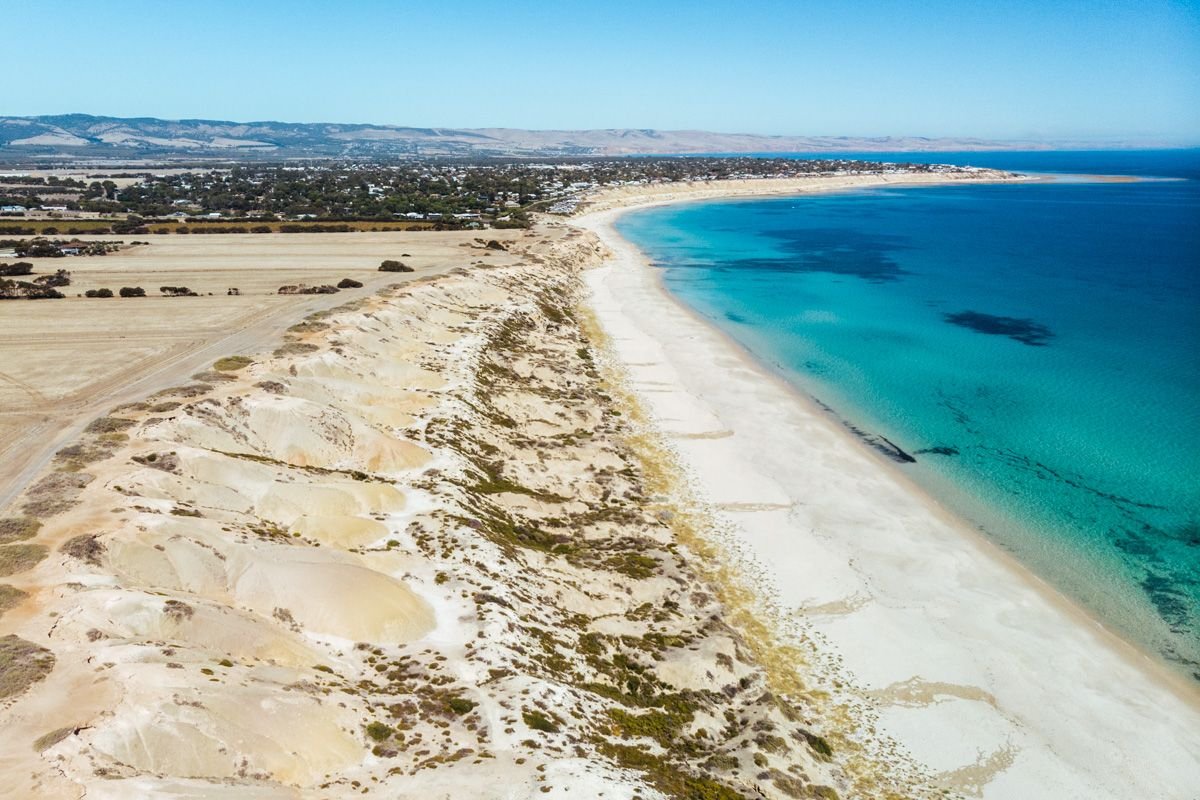 The best part is that hardly anyone is on the north end of the beach! I think people tend to bypass it for neighboring Maslin Beach, or for the southern end of Port Willunga Beach, as the walk down to the sand is quite steep. Their loss, though! It felt like we had the whole thing to ourselves on the most perfect of autumn days – it was absolute bliss. 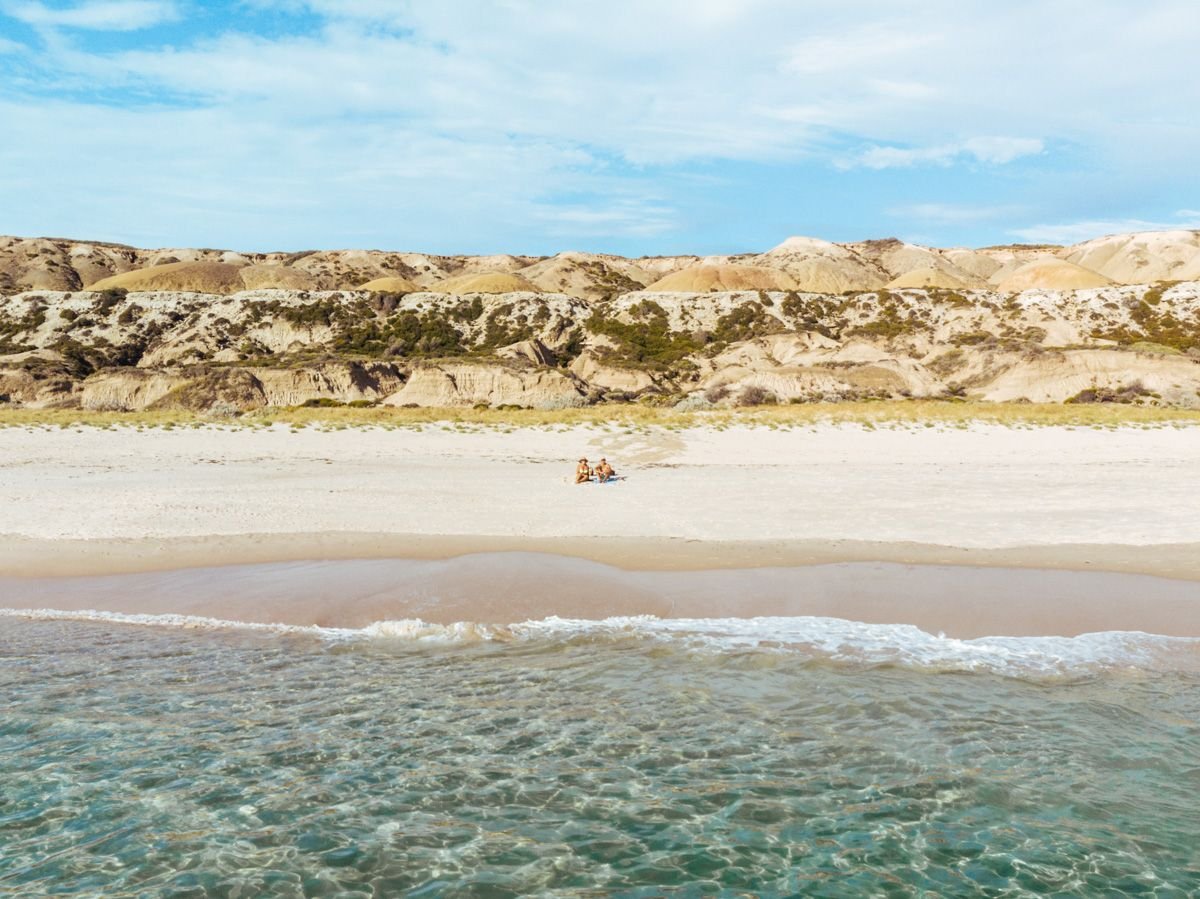 The southern end of Port Willunga Beach is much busier and more easily accessible. We walked from the north end to the south end and the vibes were like night and day, to the point where I was almost regretting getting up from my beach towel at all to explore the other side.

Though the south end is crowded in comparison to the north end, it’s definitely worth at least a look because of the Port Willunga beach caves. Apparently they were carved out by fishermen back in the day; today they’re popular for picnics, bonfires (that may or may not be illegal), and sunset watching. 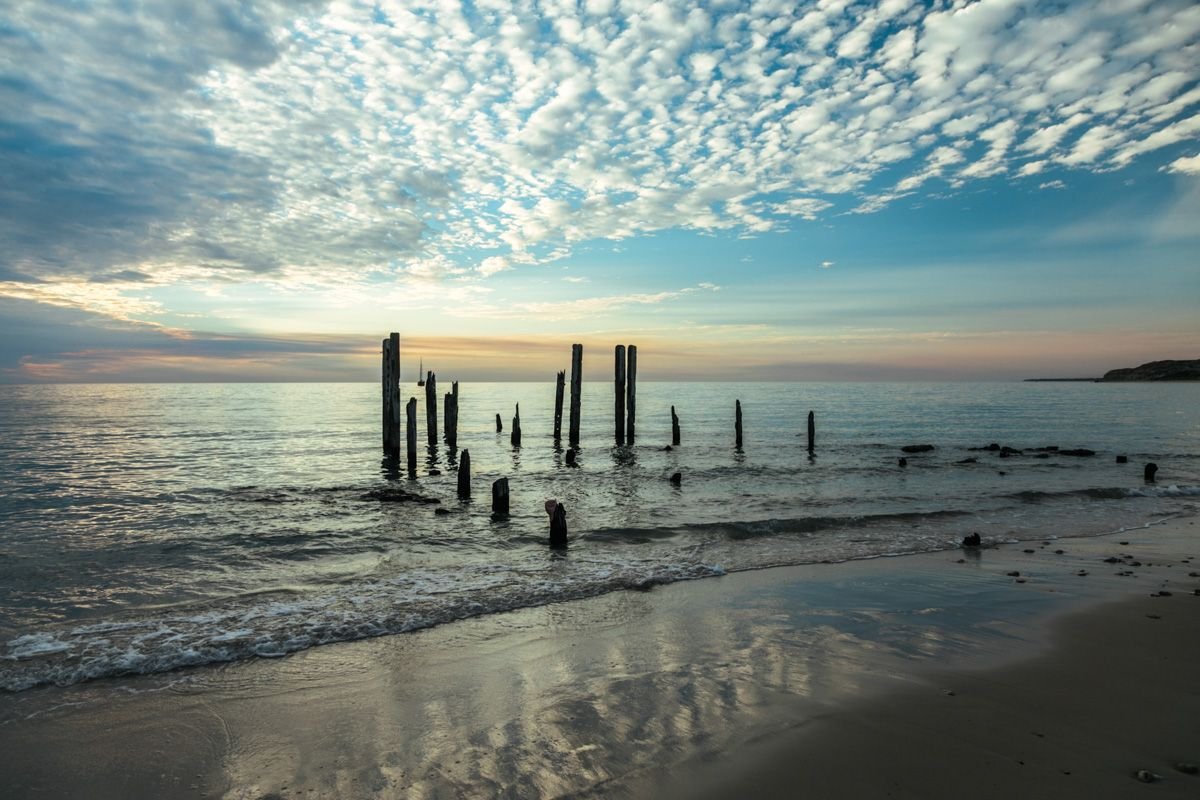 You can also spot the remains of the jetty alongshore near the caves (best seen when the tide is out).

Just above the south end of Port Willunga Beach is Star of Greece, a very popular Mediterranean restaurant with arguably the best view on the Fleurieu Peninsula. Be sure to book in advance if you want to eat here. It’s named after the Star of Greece shipwreck, which lies just offshore. 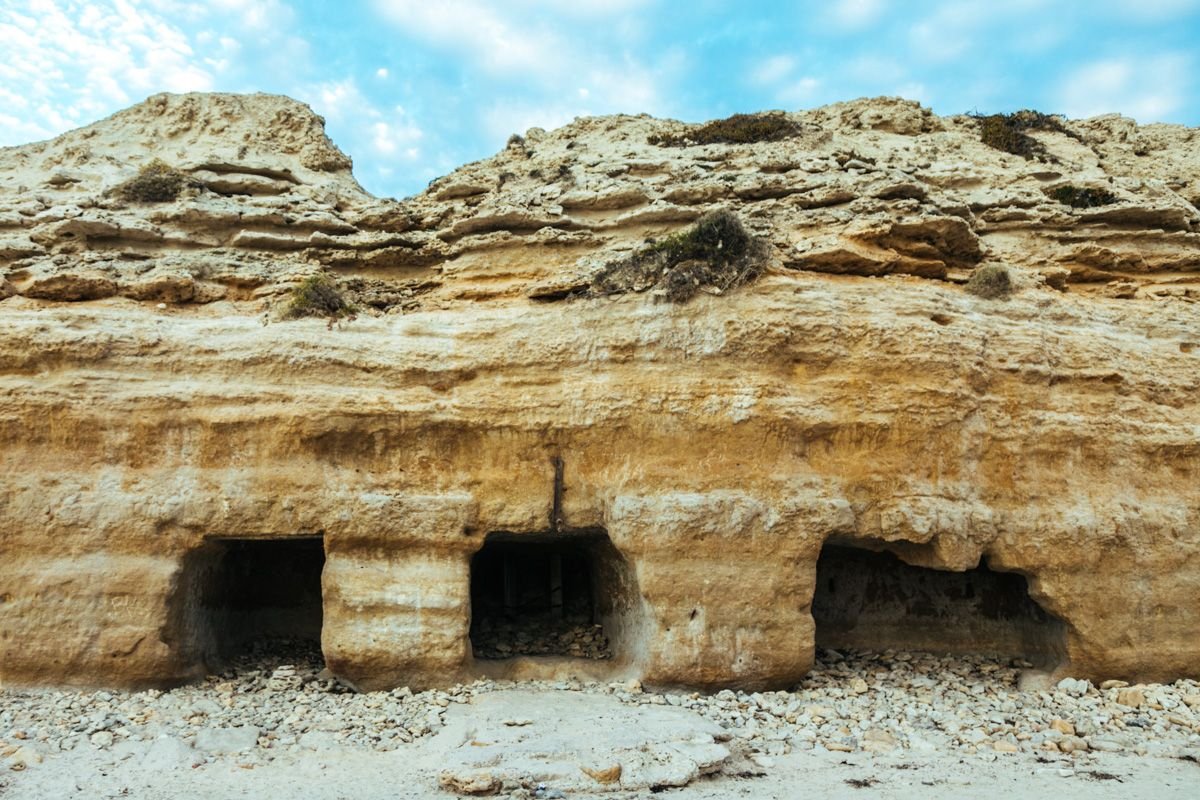 Note that the north and south ends of Port Willunga Beach are connected via a 2.8km clifftop walk, which is a quicker way to get between them than walking in the sand. Locals seem to love it for sunset walks and runs, and I can’t say I blame them with views like this!

Port Willunga is definitely one of my favorite beaches on the Fleurieu Peninsula, and where I spent the bulk of my time on my last trip down here.

Sellicks Beach is similar to the nearby Fleurieu Peninsula beaches I’ve already mentioned above in that it’s blessed with those gorgeous colorful cliffs. However, it has a little something-something that makes it stand out from the rest: some GREEN. 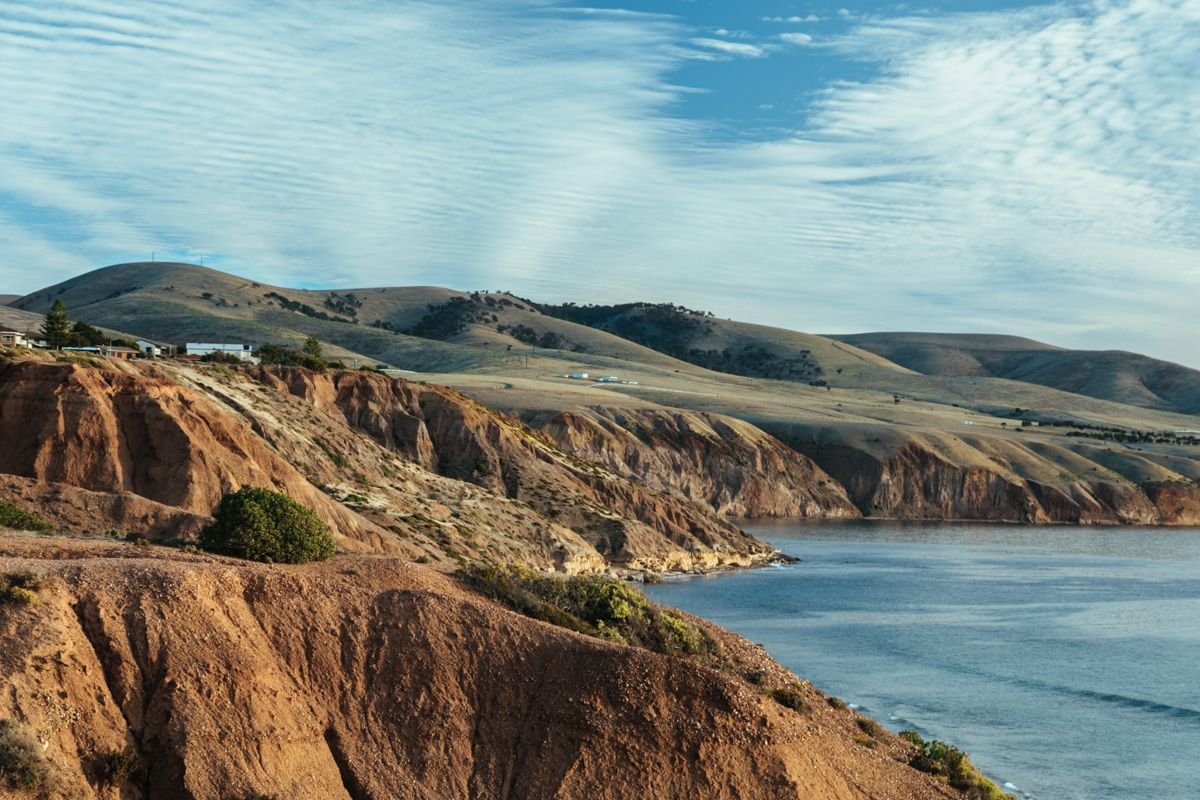 Love the contrast of the green and orange in the cliffs!

Yep, this is definitely a top spot for flying a drone on the Fleurieu Peninsula (just watch out for winds). I’d say Sellicks Beach looks better from above than from on the sand.

The beach itself is pretty flat and narrow, making it ideal for beach drives. It’s pretty normal to see cars on the beach at any given time during the day. 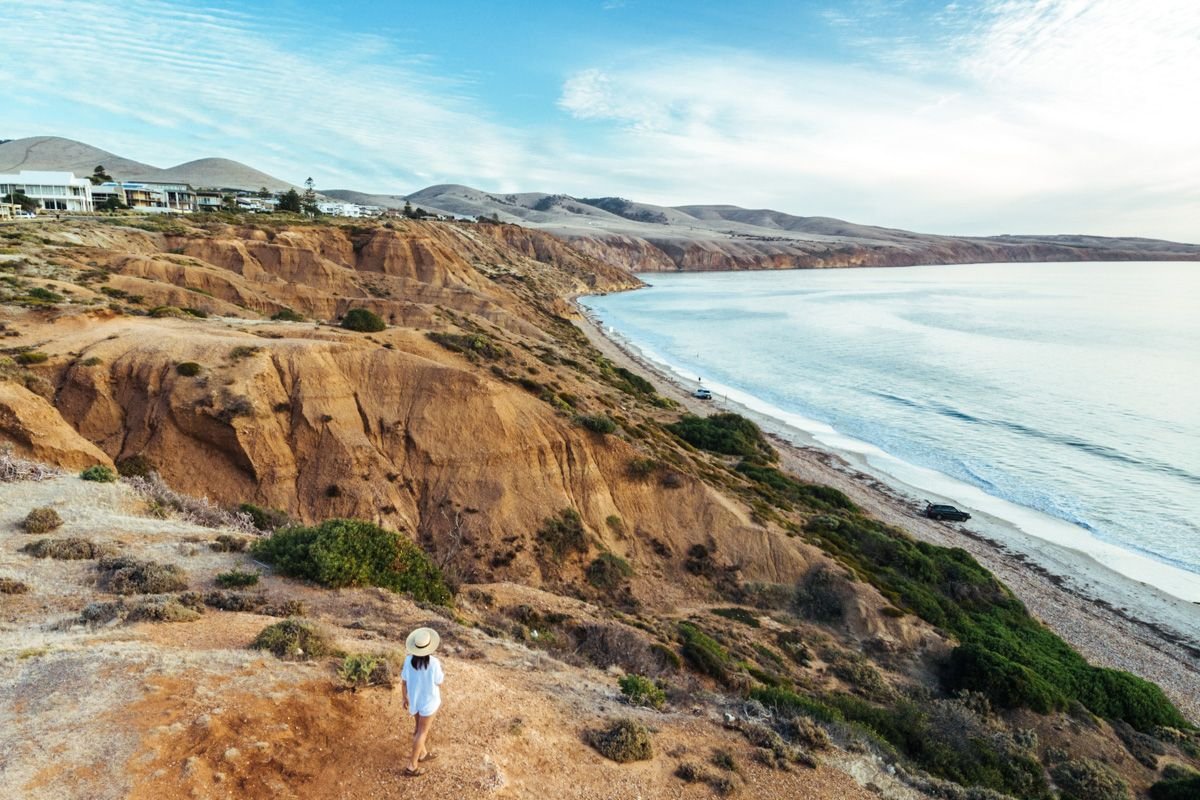 The next batch of picturesque Fleurieu Peninsula beaches can be found further down the coast, about a 45 minute drive from the last set of beaches I just talked about.

Carrickalinga Beach is a local family favorite, beloved for its white sand and clear turquoise water. There are no dramatic cliffs or manmade wonders to marvel at here – just pure, pretty beach. 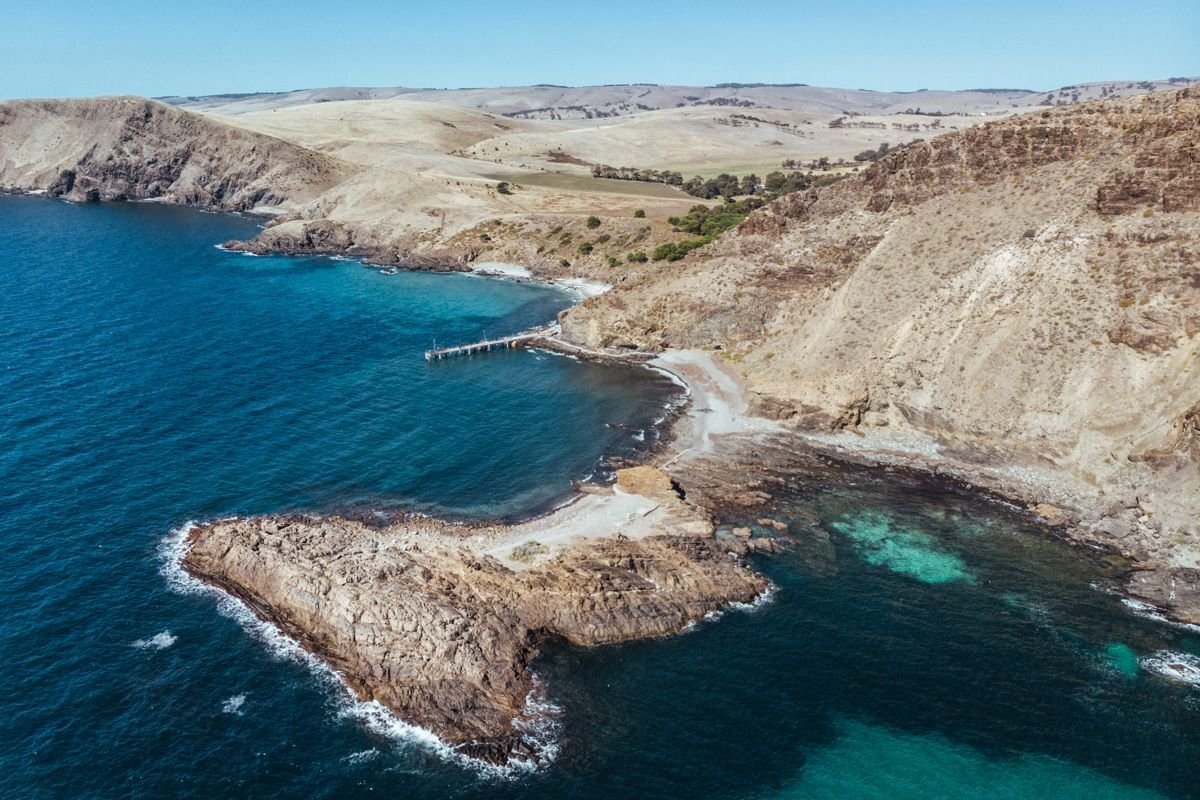 And the Fleurieu Peninsula beach with the most European vibes goes to… Second Valley!
In particular, there’s a rock pool just beyond the jetty (to the left of it) that looks like something out of Italy or Greece. It’s framed by rock reefs and a cliff fit for jumping.

Just opposite the rock pool is a rocky beach, and further along is a small rocky peninsula (notice a theme here? This part of Second Valley Beach definitely aint sandy!). The views from here, both of the coast and from above (hello drone!) are fantastic. 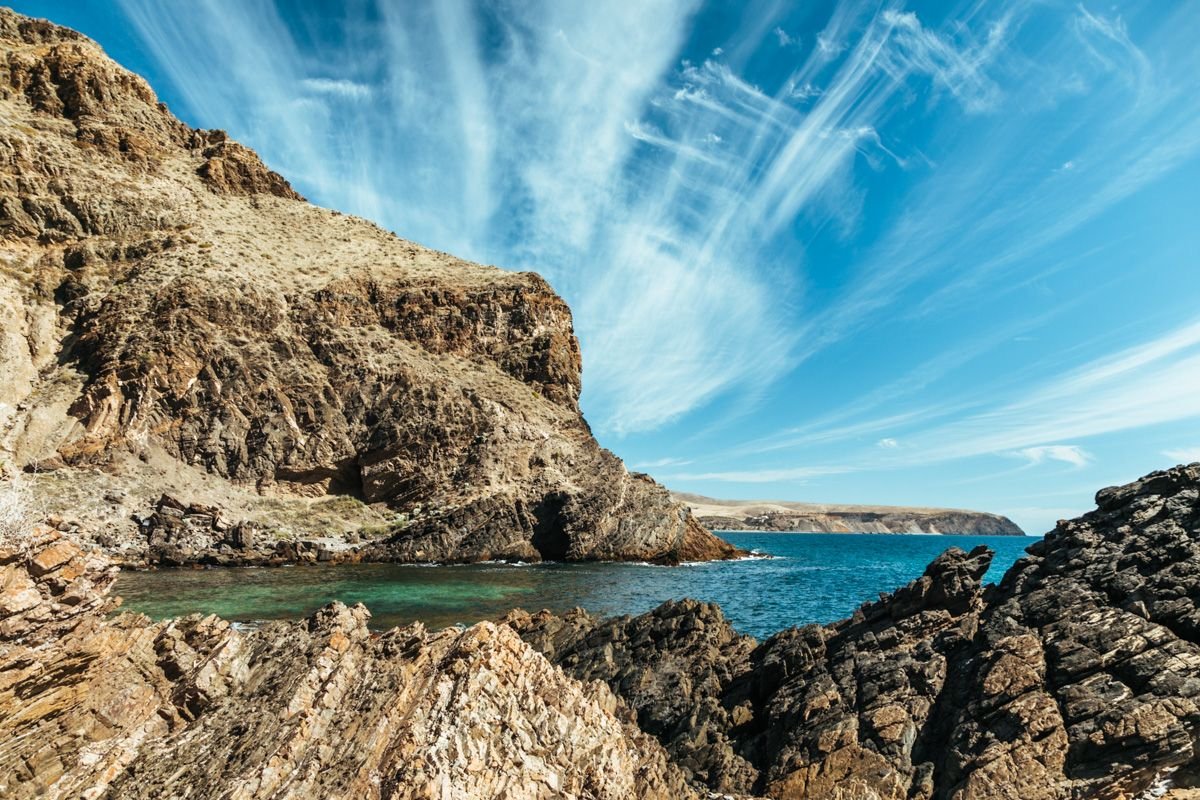 On the other (right) side of the jetty is a sandy beach, which is where you’re likely to find most beach-goers.

If time is limited, I’d say bypass the beach and follow the walking trail northward through the hills above it. The scenery and views from up here are absolutely glorious, and you’ll get to see little coves that aren’t visible from the main beach.

It’s a tough call, but this might be one of my favorite beaches on the Fleurieu Peninsula, thanks to this scenic trail and the hidden coves. 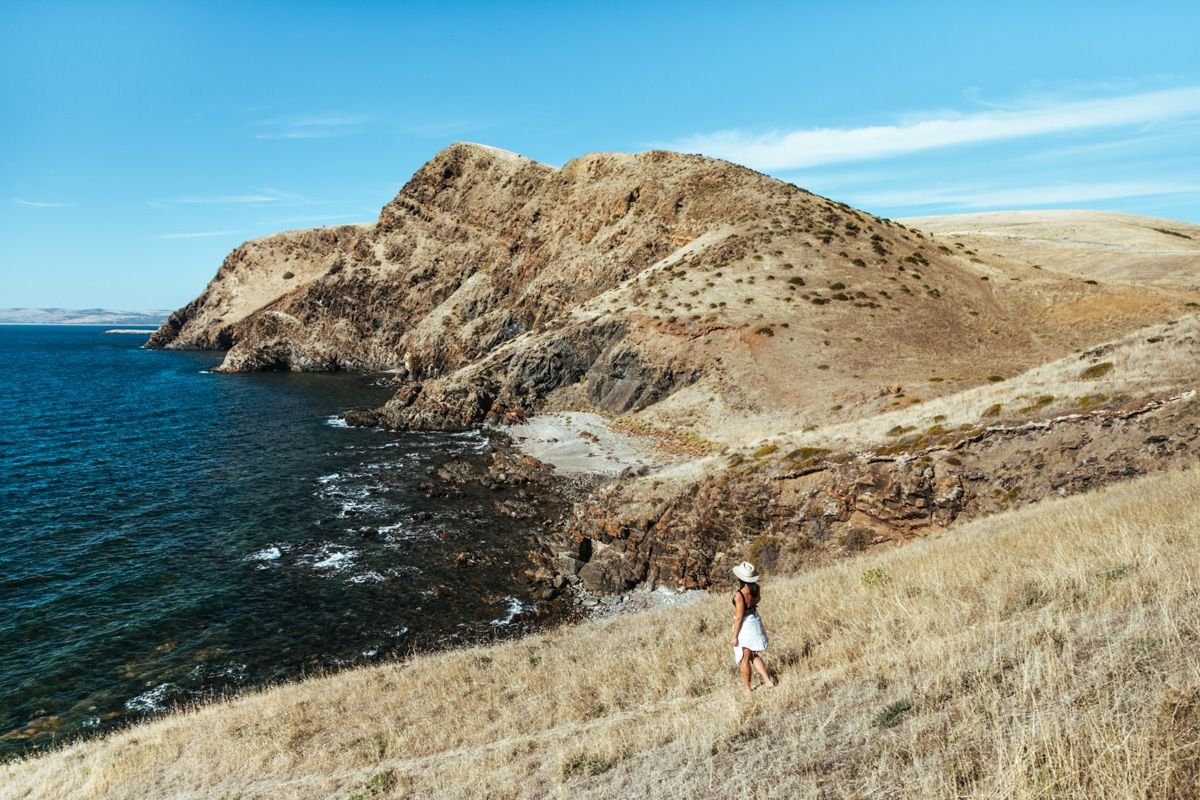 The next beach south of Second Valley is Rapid Bay, known for its beach cave on the north end.

I’d dub this an adventurer’s beach just because of all of the activities you can do here apart from swimming: there’s rock climbing (to get further into the cave), diving around both the new and old jetties (apparently you can spot the famous leafy seadragon here), fishing, and kayaking. 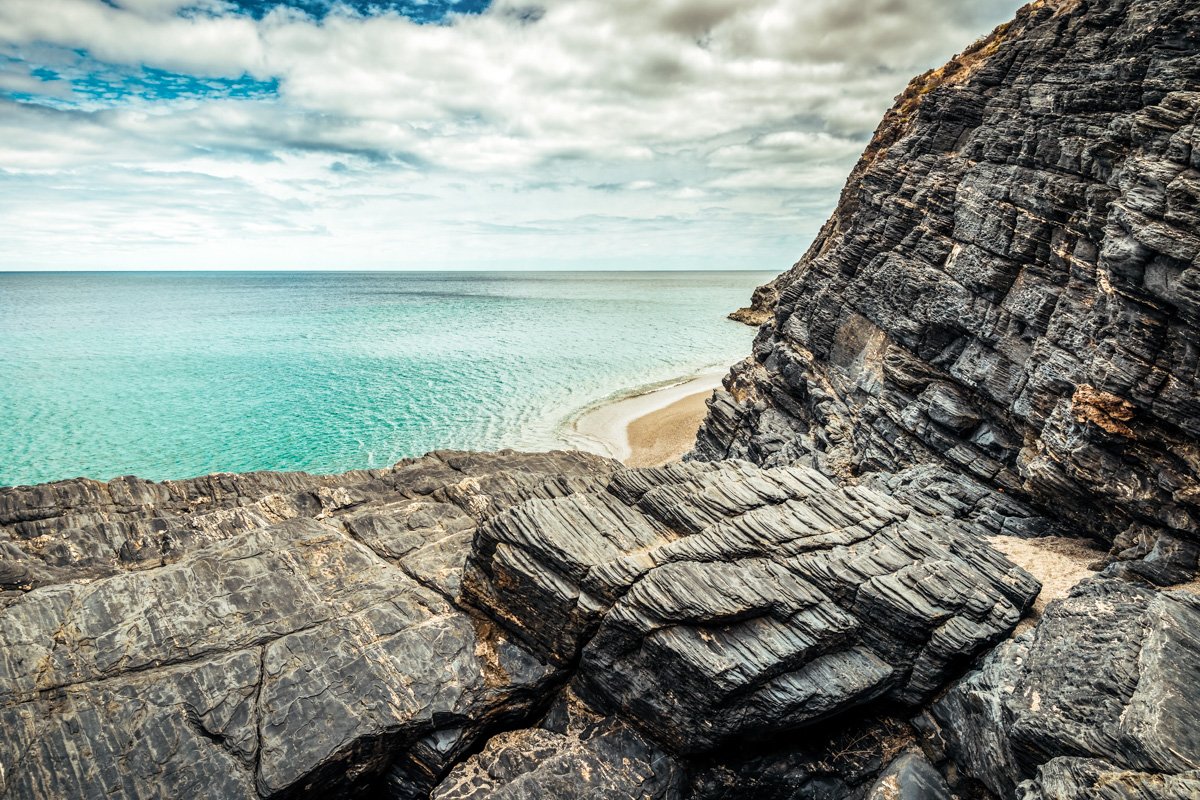 And lastly, we have the Fleurieu Peninsula beach requiring the most effort to get to (both in length of drive from Adelaide + accessibility from the car park).

Blowhole Beach sits at the bottom of the peninsula in Deep Creek Conservation Park, not too far from the ferry to Kangaroo Island, and is a firm local favorite. If you have a high clearance 4WD vehicle, you can drive right down to the beach; otherwise, there’s another car park where you can park and hike in from.

The hiking track down from the Cobbler Hill car park is 2km one way and said to be steep in parts, particularly grueling when trekking back uphill. But it’s also extremely scenic, and the secluded beach at the end of it is well worth the effort.

Oh and evidently there’s not actually a blowhole at this beach. There are, however, heaps of kangaroos around, as well as a distant view of Kangaroo Island. 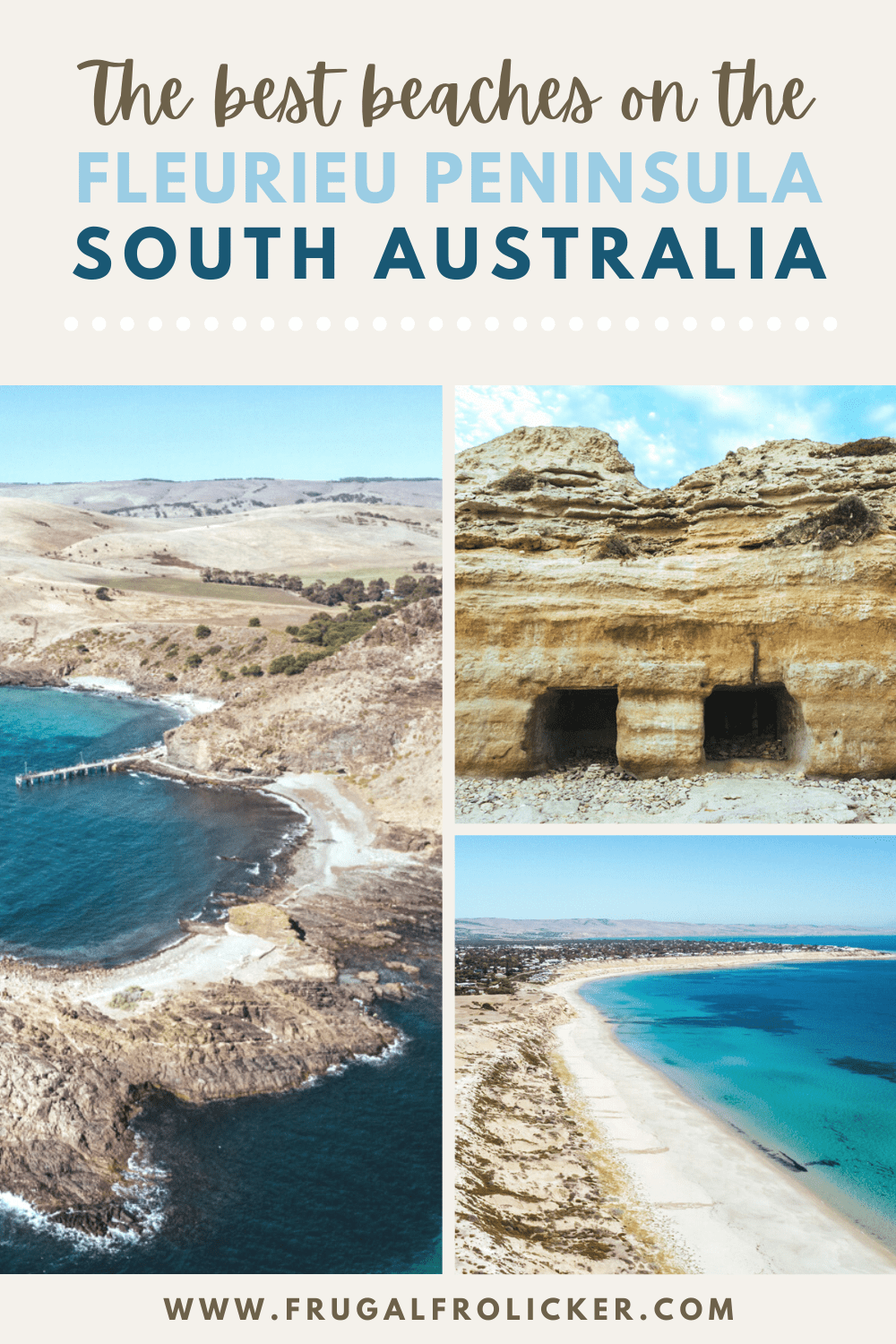