One of the many, many perks to living in Sydney is having the world’s second largest national park right on your doorstep.

If I’m ever at a loss for what to do on a weekend, the Royal is an obvious go-to. From secluded swimming holes to beautiful beaches to hikes, there’s so much to see and do in Royal National Park. It’s a place I keep returning to year after year.

From north to south, here are the top 10 things to do in Royal National Park: Near the northern end of Royal National Park is Audley Boatshed, where you can rent a rowboat, canoe, kayak, or aqua bike and take it down the Hacking River. Check their website for current pricing.

Right by the boat shed is the Royal National Park visitor centre which also houses a gift shop and cafe. You can purchase your day pass here for $12 if you don’t already have a NSW national park pass.

I dare say this is the best hidden gem in the Royal (major props to Wild Swimming Sydney for the tip!).

To get to this special swimming hole, you have to hike ~30 minutes down the fire trail to Winifred Falls (which I found extremely underwhelming with its stagnant water both times I visited). From the falls, continue downstream (left) down a path in the woods and ~5 minutes later you’ll reach South West Arm Pool. If you’re after thrills, there’s a rope swing and a big boulder fit for jumping off of; or if you’re more into sunbathing like I am, there are flat rocks or the sandbar to lay out on.

I’d recommend getting here earlier than later, as the sun goes behind the trees a few hours before sunset. This pool is down the creek when you take a right at Winifred Falls rather than a left.

To get there, start driving through the national park from the north entrance, pass by the Audley Boatshed and visitor’s centre, and turn right onto Warumbul Road. The start of the Winifred fire trail will be on the right; park your car on the left side of the road and hike in from there. This’ll be about an 8 minute drive from the park entrance in total.

If you type in “Winifred Falls Firetrail” into Google Maps it should get you there (just don’t listen to it when it tells you to drive down the fire trail – you have to walk this part).

I wouldn’t say that Wedding Cake Rock is worth a stop on its own, but it’s worth checking out if you’re exploring other places within Royal National Park and don’t need to go too far out of your way for it.

Wedding Cake Rock is part of a cliff that, true to its name, resembles white wedding cake. The rock is supposedly unstable and so is fenced off now to prevent people from getting too close to the cliff edge – but many will hop the fence to get their photos on the rock anyway. To get there, follow the Coast Track from Bundeena and you should reach Wedding Cake Rock after about an hour of walking.

The coastline of Royal National Park is dotted with picturesque beaches, but if you’re looking for solitude you’ll want to visit one of the beaches that’s not so easy to reach.

Marley Beach is one of ‘em, and she sure is a beaut! Well worth the hike in from the main road. To get there, either hike the Coast Track (it’s about halfway through), or park at Bundeena Drive and hike in via the Marley Track (4km and ~50 minutes one way). You’ll be rewarded with sand dunes and a near-private beach, depending on the day.

Don’t have a car? You’re in luck, because the Karloo Walking Track and its many swimming holes is accessible from Heathcote Station, which means you can reach it by train from Sydney.

The Karloo Walking Track is 2.4km one way and is estimated to take 30 minutes to hike. It ends at Karloo Pool, which is a very popular spot on summer weekends. The water here is super clear on a sunny day and is definitely worth a swim and/or a stop for lunch, but if you’re after a more tranquil swimming hole you’ll want to carry on a little further to Olympic Pool (or any of the other little pools along the way). To find these other pools, walk around Karloo Pool and follow the foot path along the creek downstream. There’s a bit of rock scrambling and bush bashing involved, but for the most part it’s pretty easy to find your way. Check out this site for more detailed directions.

You’ll know you’ve reached Olympic Pool when you glimpse a majestic pool with clear green water, surrounded by plentiful rock shelves fit for sunbathing. This will be about 1.5km from Karloo Pool.

Olympic Pool is said to be 50m deep at its deepest point. When we visited, the water was stagnant and kind of gross, and the cloudy sky kept the water from looking clear and sparkly. On a sunny day, it would be absolutely fantastic though! To get there, take the train to Heathcote Station (or drive and park there). Cross the tracks so that you’re on the east side (left side of the train, if you’re coming down from Sydney), exit through the commuter parking lot, pass the fire station, and find the trail just south from there. Search for “Karloo walking track” on Google Maps.

Wattamolla is one of the most popular spots in the Royal, and for very good reason. With a lagoon, dam, sandbar, and beach all in one, it’s certainly a unique place to explore for an afternoon.

If cliff jumping is your jam, the Wattamolla dam is a top spot from which to jump. Otherwise, you can swim in the calm water of the lagoon or take to the ocean for a dose of sand and surf. To get there, drive to the Wattamolla Beach car park and walk right down. Because it’s so accessible, expect to share this place with plenty of other people, particularly families and picnickers.

The Royal’s Figure 8 Pool is a prime example of what happens when a place becomes a little too insta-famous. Tourists and locals alike seek out this 8-shaped pool in the rocks just offshore Burning Palms Beach and as a result, it’s nearly always swarming with people waiting in line to take their photo in the pool.

Between the crowds, music blasting on speakers, and rubbish left behind, the Figure 8 Pool isn’t always an enjoyable experience. Still, I think it’s worth seeing at least once. 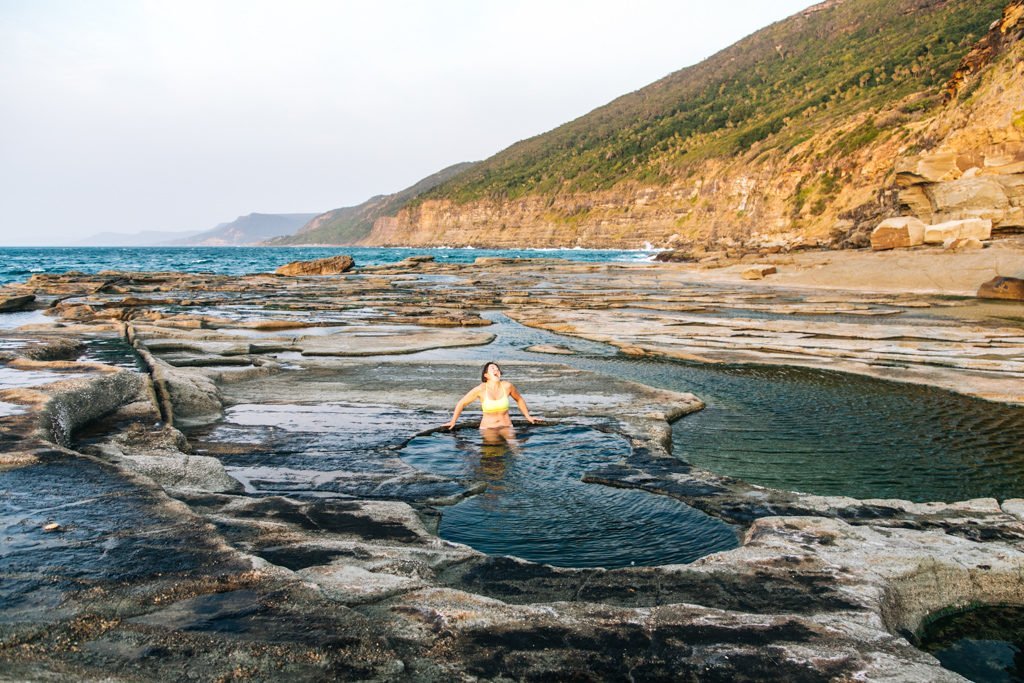 That time I forgot my swimsuit and went in the water in my undies. This is right after sunrise on a Sunday.

Here are a few tips on how to make the most of the Figure 8 Pool:

To get there, drive into Royal National Park and park at the Garrawarra Farm Car Park. From there, follow a trail that leads down to Burning Palms Beach. The trail is clear and easy, and takes ~1 hour to walk the 3km down there. On the south side of the beach, follow the rock shelf around the headland to get to the pools.

Alternatively, if you don’t have a car, you could take the train to Otford and hike a couple hours on the Coast Track to reach Burning Palms. This is right behind the Figure 8 pool.

It’s typically done as an overnight hike where you carry in all your food and camping gear and stay the night at North Era campground, but you could alternatively make a very long day of it and do the whole thing in one go.

Either way, the Coast Track is absolutely fantastic. There’s so much to see along the way (beaches! rock pools! cliffs! scenic views!), and it’s oh-so-tempting to stop off at the gorgeous beaches you’ll hike by (and sometimes on). If you hike from May-October, you’re likely to spot whales offshore.

Check out my other post on the Royal National Park Coast Track for more details and photos of the hike! To get there, take the train to Cronulla and then the ferry to Bundeena and start hiking north to south. To get back to Sydney, catch the train from Otford station. If you’d rather hike the track from south to north, you can just reverse those directions and you’ll be set.

Did you know there are 3 campgrounds in Royal National Park? North Era and Uloola Falls are walk-in only, while Bonnie Vale is right in Bundeena (though closed until further notice due to an asbestos problem).

Unofficially, it’s very obvious that people also stealth camp just off the north side of Garie Beach (in the bush), and just off the south side of Burning Palms Beach (on the hill). 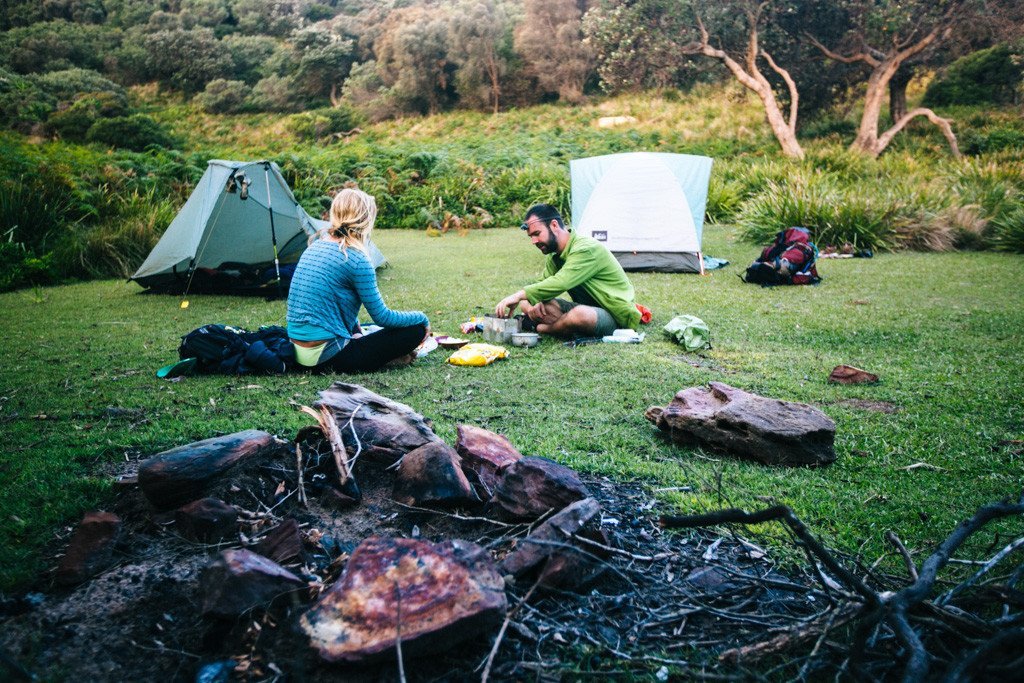 No matter which campsite you choose, Royal National Park camping is an awesome experience – and it gives you plenty of time to really soak up the magic of this national park.

Sure, there are heaps of incredible lookouts and views from within Royal National Park – but I’d say you get the best bang for your buck at Otford Lookout and nearby Stanwell Tops Lookout, as you can drive right up to them. Heck, you can even just stop by if you happen to be driving down the coast but not necessarily through the national park.

Man, the view down the south coast toward Wollongong is absolutely stunning. I don’t think I’ve ever been to these lookouts and NOT seen paragliders coasting by – it’s a top spot for it. Can you blame them?