Of all the places I’d planned to visit on my 5-month journey through Asia, I was most excited about southern Thailand. I ended up spending nearly 3 weeks there in total, split between several islands and beaches – and I definitely could have spent MUCH more time island hopping there. It really is a stunningly gorgeous region.

I semi-arbitrarily chose Koh Lanta as my first stop in southern Thailand, thanks to several glowing reviews. I spent a week on the island: the first half in the north, near Klong Dao and Long Beach; the second half in the south, at Kantiang Bay. Koh Lanta is some 25km long, which is quite a bit of ground to cover for an island, ESPECIALLY if you’re not driving – so I figured splitting my time across the island would give me a more well-rounded experience.

I actually did attempt to rent a motorbike once, but my test ride was a complete disaster! We went through the paperwork, I tried on every.single.helmet. they had and found the ONE that fit my enormous head, then figured I would try the bike out right in front of the shop. I had no idea what I was doing and ended up flailing around in the driveway, nearly crashing or falling over several times – and the Thai girl renting it to me couldn’t coach me through it in English. She looked terrified as she watched my performance and was beyond relieved when I suggested we not go through with the rental. It was really seriously embarrassing, but for the best. Someday I’ll have to have a proper motorbiking lesson!

So instead, I hopped around Koh Lanta on foot and via tuk tuk. I didn’t get to check out the eastern side of the island or the inland jungle since my transportation options were limited, unfortunately. But you know, it’s ok because I SAW AN ELEPHANT IN THE WILD, playfully swinging its trunk back and forth with a smile. Doesn’t that look like a smile? 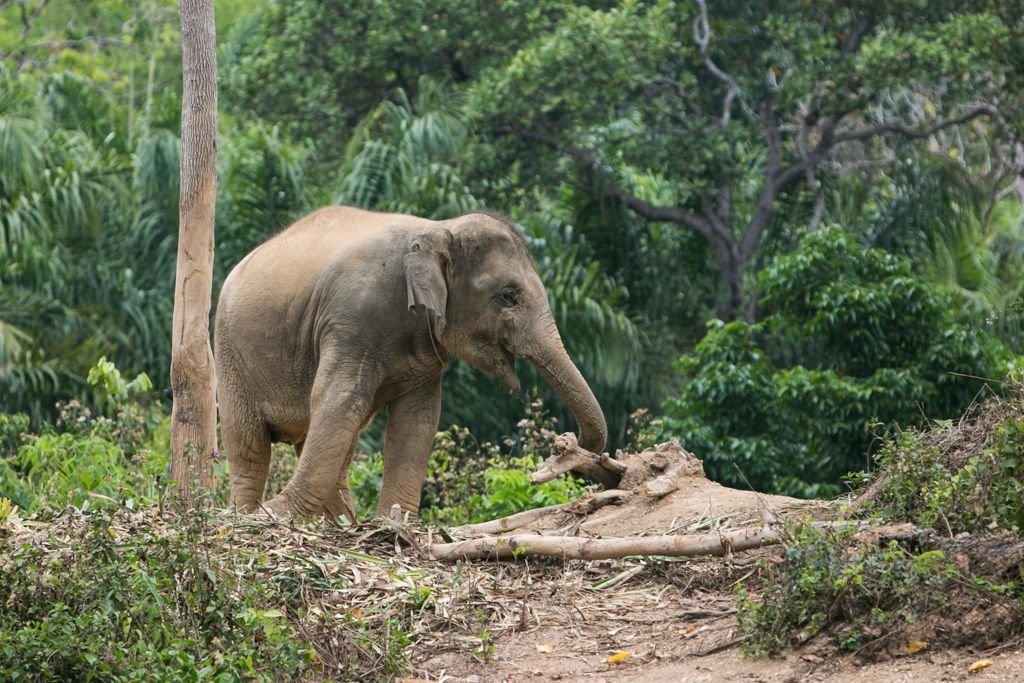 My Accommodation on Koh Lanta

I came across Time For Lime on Klong Dao Beach while doing my internet research and knew IMMEDIATELY that I had to stay there. I just love what they’re about: a passion for food and compassion for animals. That, and they’ve got a killer website, which always seems to sway me.

To that end, they have an in-house cooking school and are affiliated with the local animal shelter, to which they give a % of their profits. I enjoyed my beachfront happy hour cocktails guilt-free and got to hang out with cats on my bungalow deck every day. I think that’s what they call *winning*!

The bungalows at Time For Lime are really nice and modern, which is definitely not the norm throughout Southeast Asia: 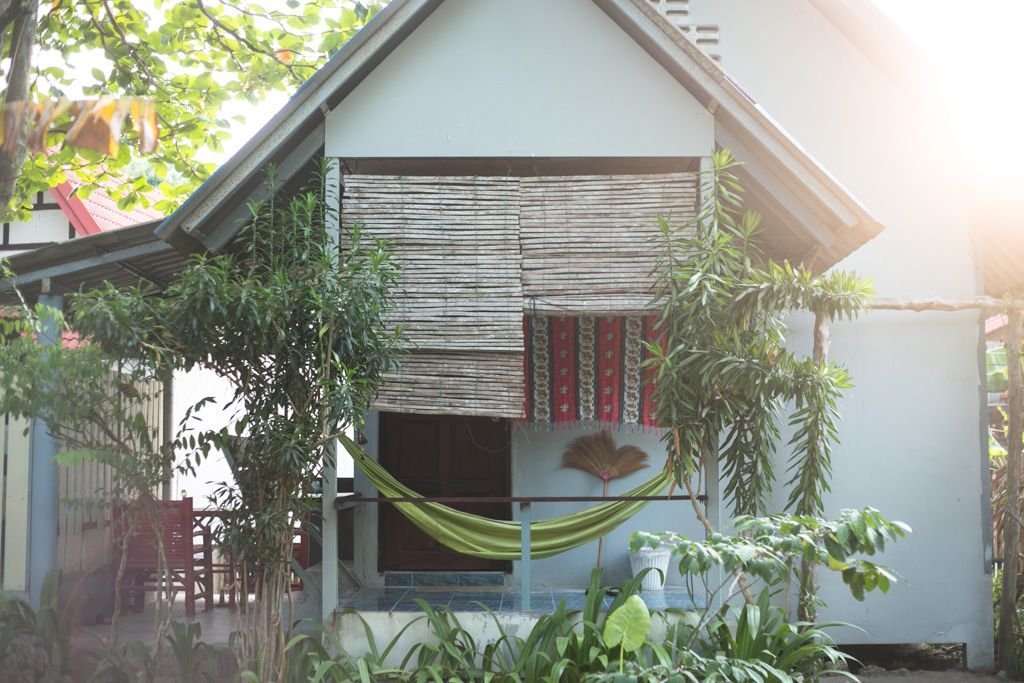 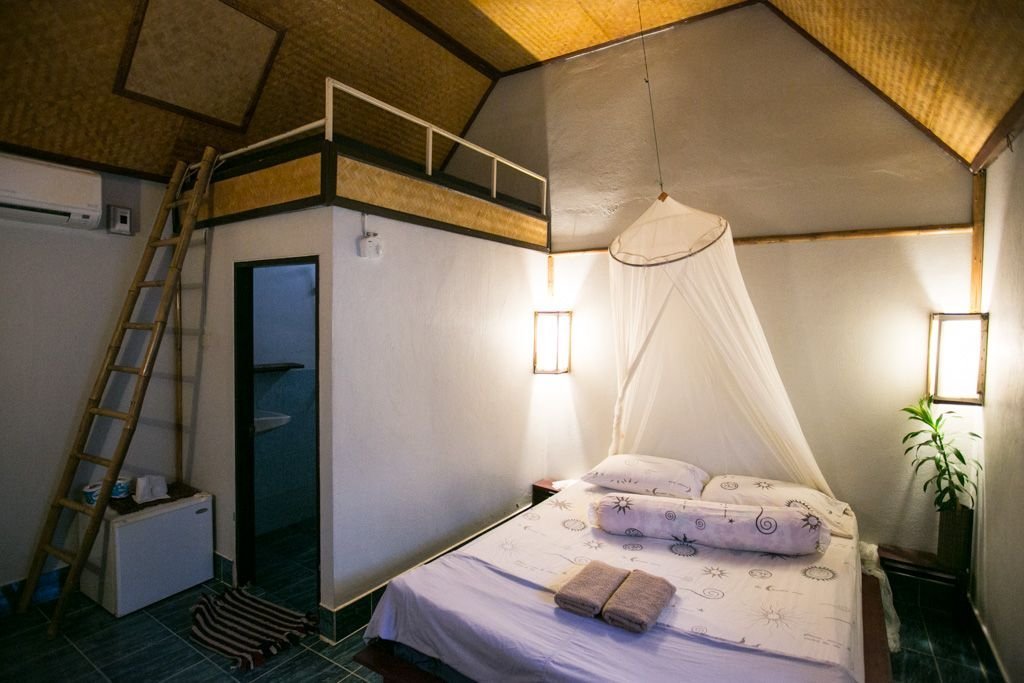 I saw an ad for Top View Resort in one of the local guides to Koh Lanta while I was already on the island and simply showed up halfway through my Koh Lanta stay, asking for a bungalow. At 250 baht/night ($8.40), this is by far the cheapest bungalow around. It was *sliiiiightly* more rustic than the bungalow at Time For Lime. Let’s just say I made use of the mosquito net. 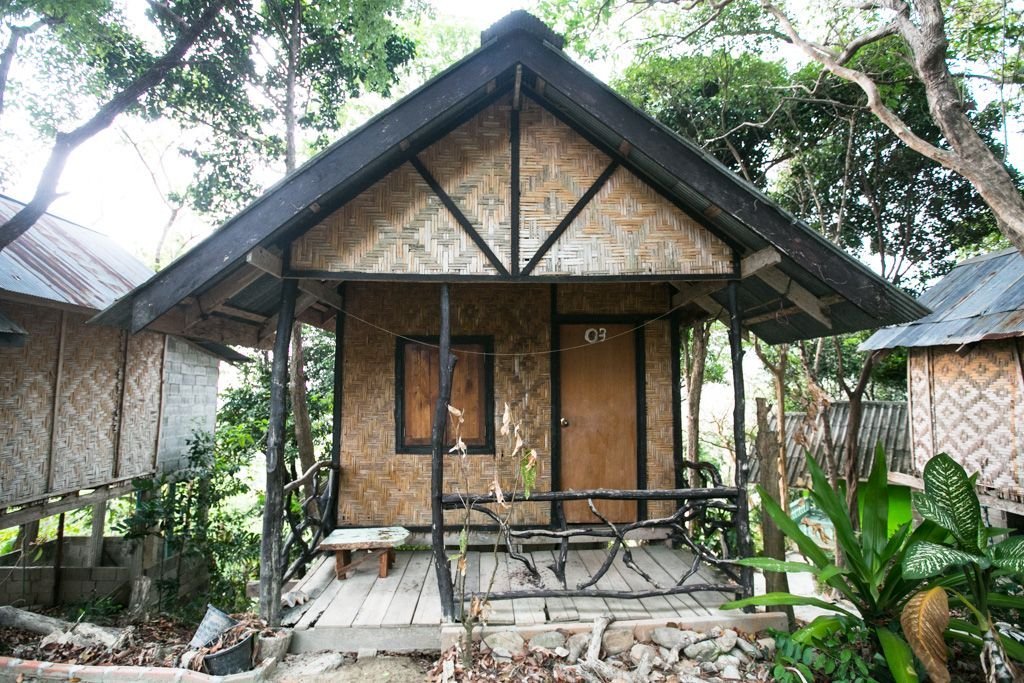 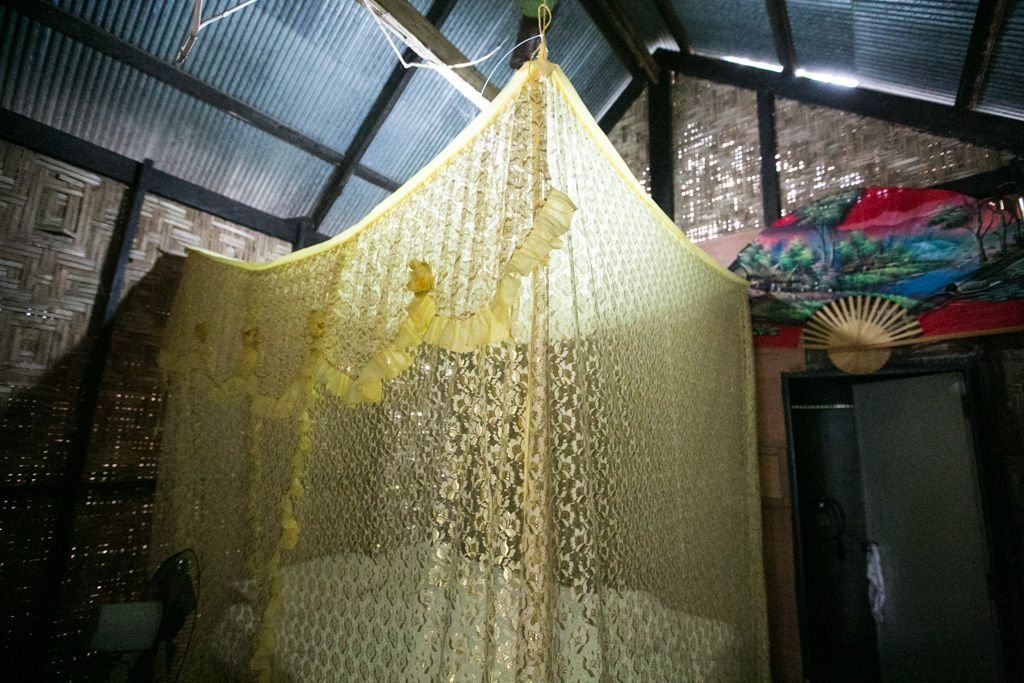 The best thing about Top View was – not surprisingly – the view over Kantiang Bay and the Andaman Sea. I had a nightly ritual of sunset happy hour drinks and dinner stationed in one of these huts on the hill: 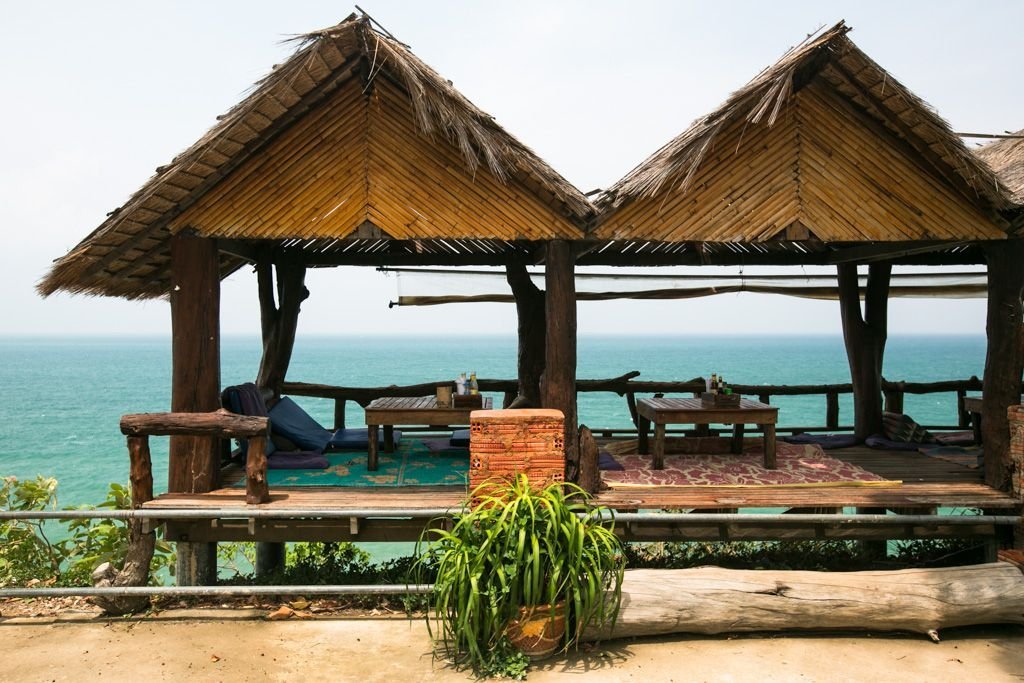 Beaches I Visited on Koh Lanta

Here’s the general rule of thumb for beaches on Koh Lanta:

I really wanted to sample the different types of beaches on Koh Lanta, so I made my way from north to south: 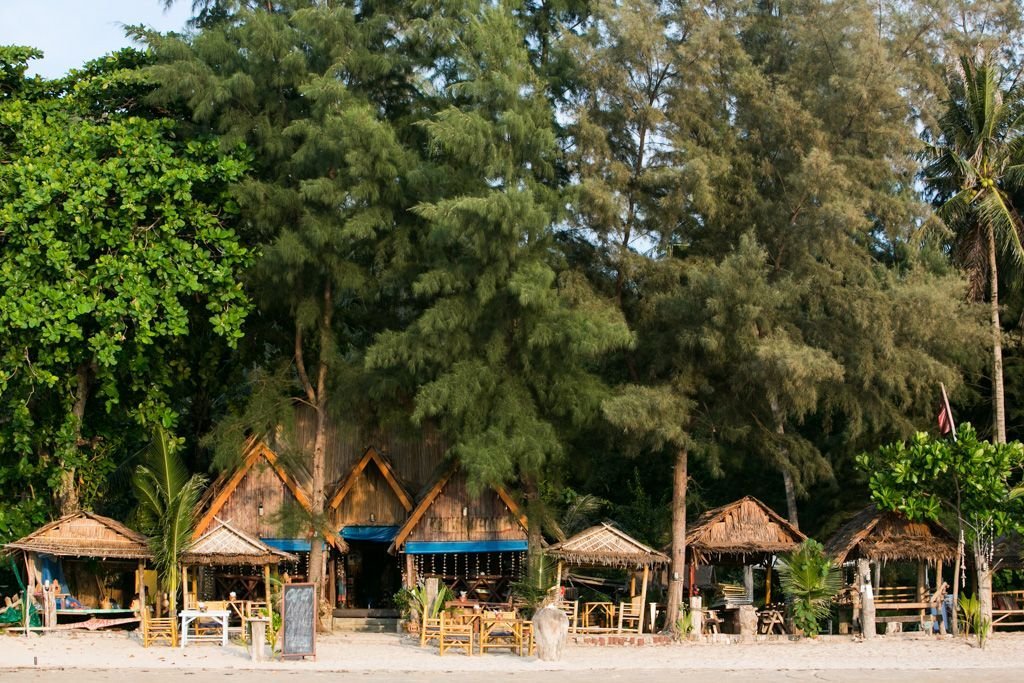 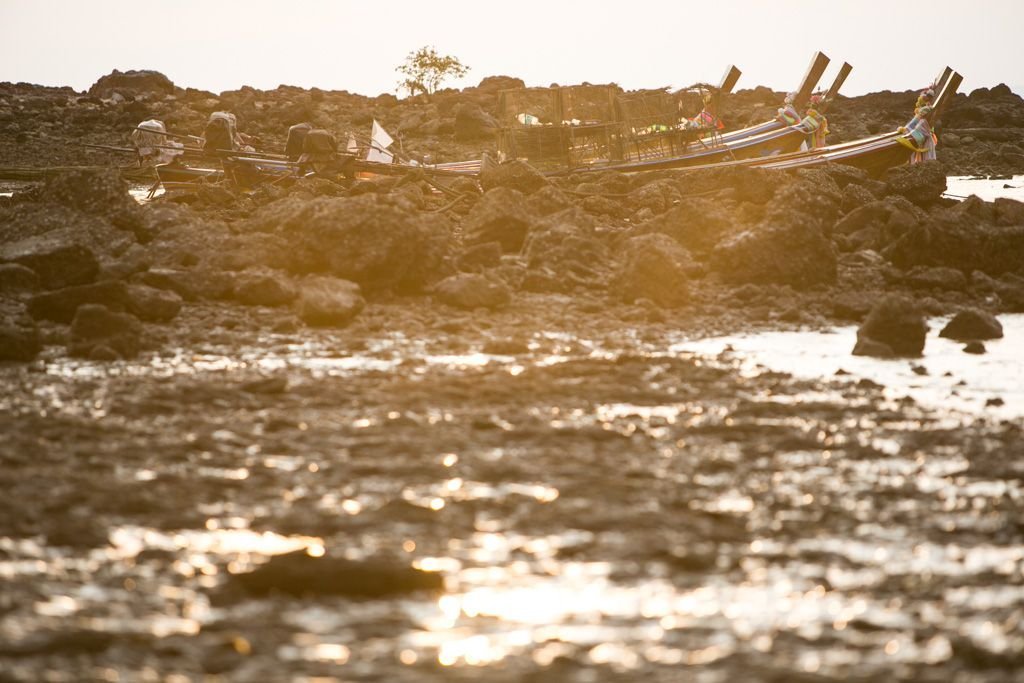 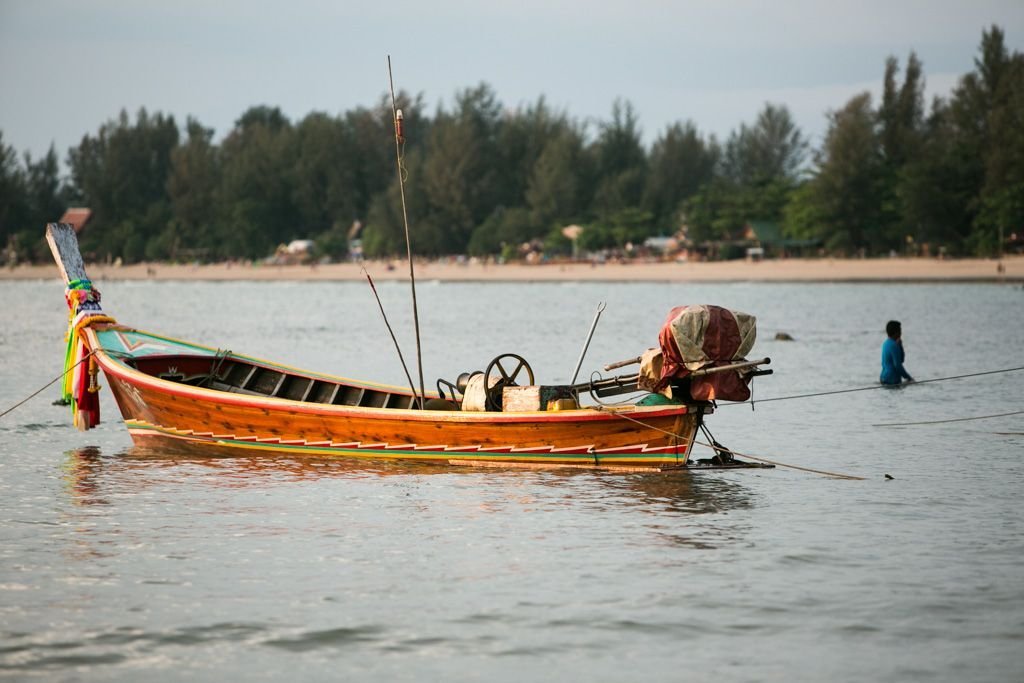 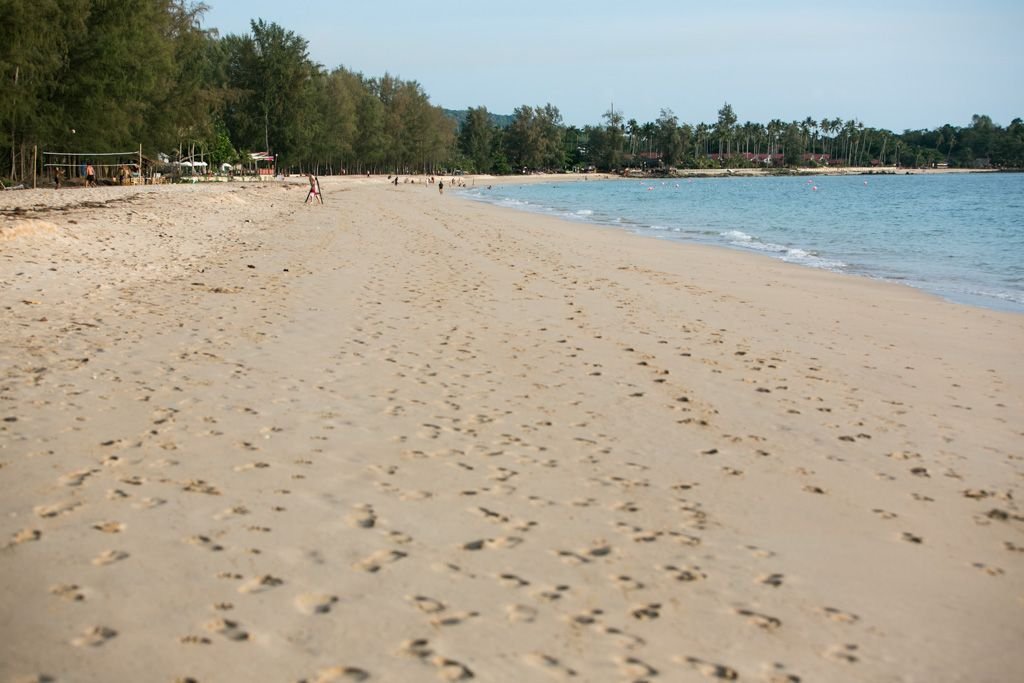 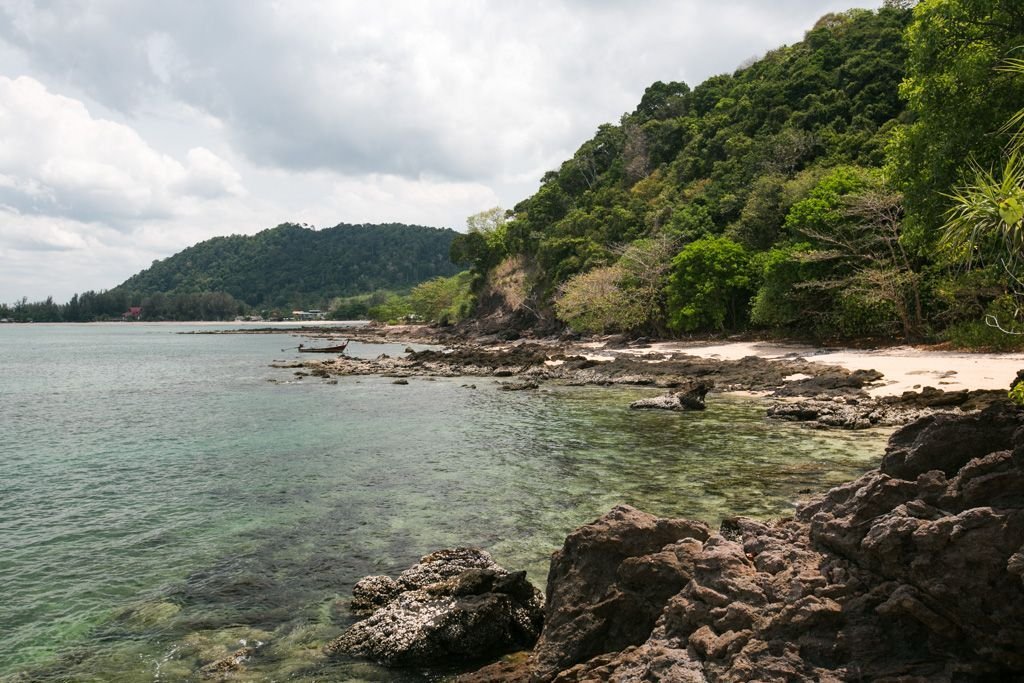 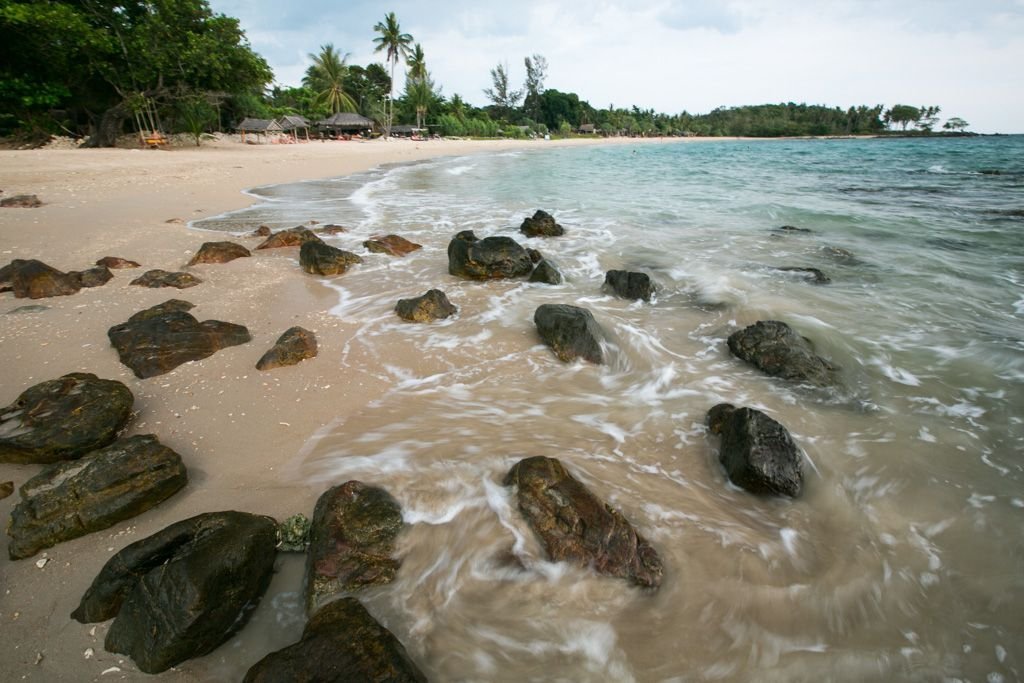 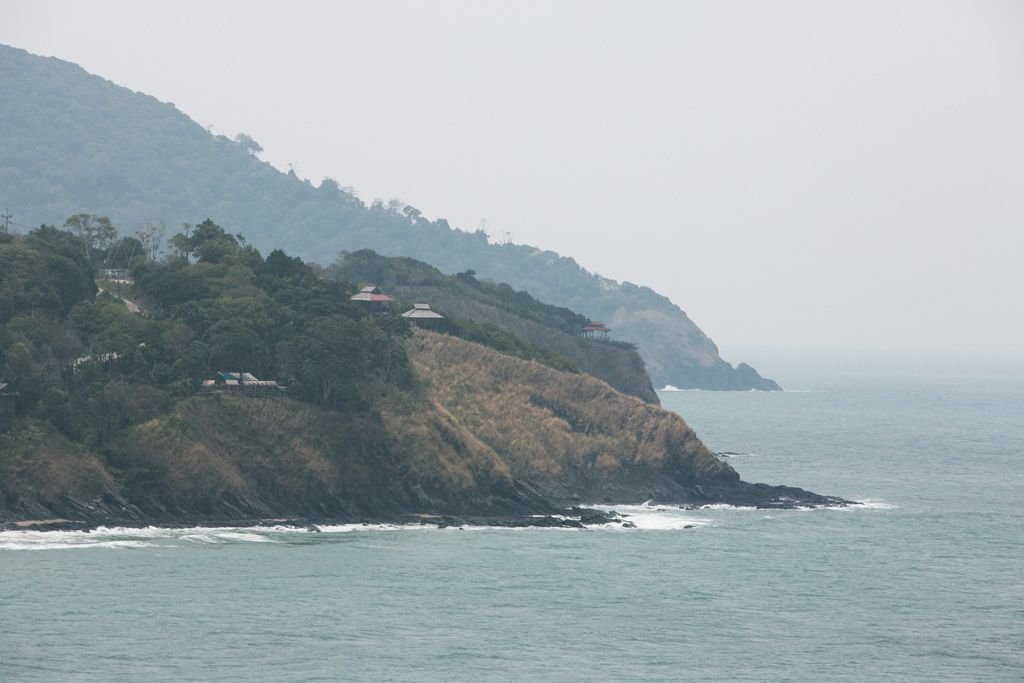 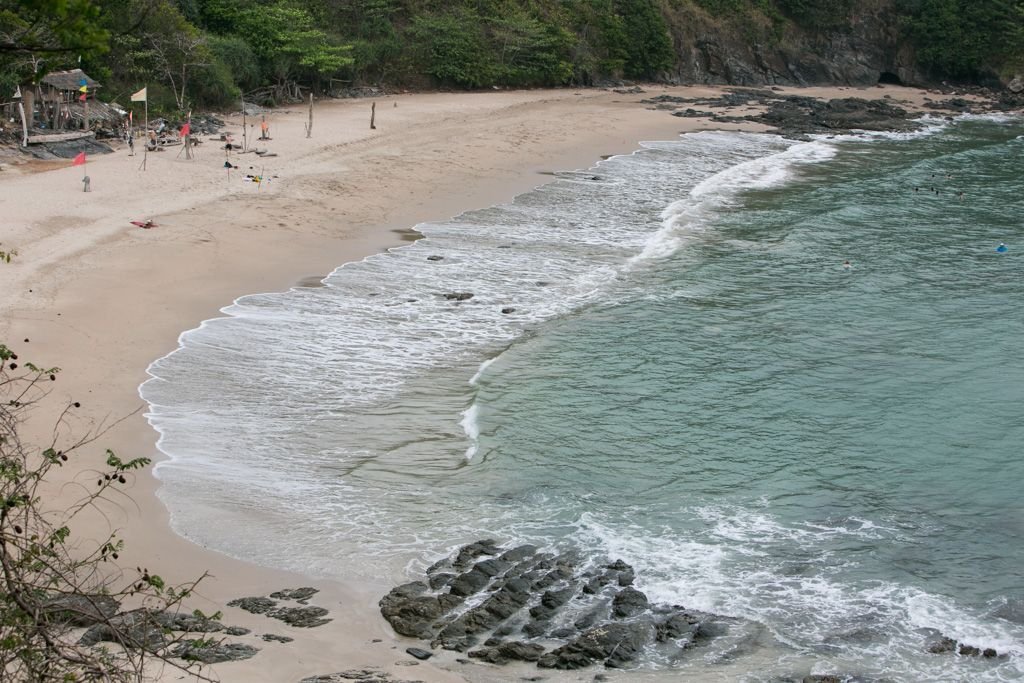 Far and away the most beautiful thing I saw on Koh Lanta, the national park is an absolute must-see. It does take some effort to get to, as it’s all the way on the southern tip of the island. In typical Lindsay fashion, I walked all the way there from Kantiang Bay, not really considering the constant undulating road and numerous hills I’d have to walk up and down in 110 heat index weather. I had all but stripped down to my bathing suit by the time I arrived. Thankfully I was able to catch a ride back on the back of someone’s motorbike. 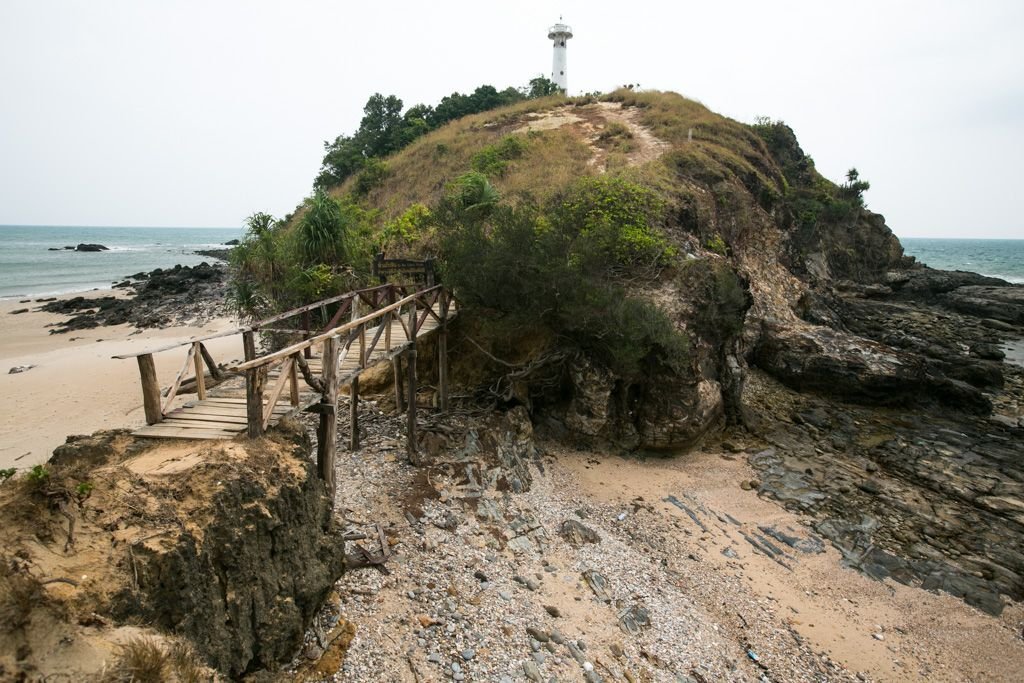 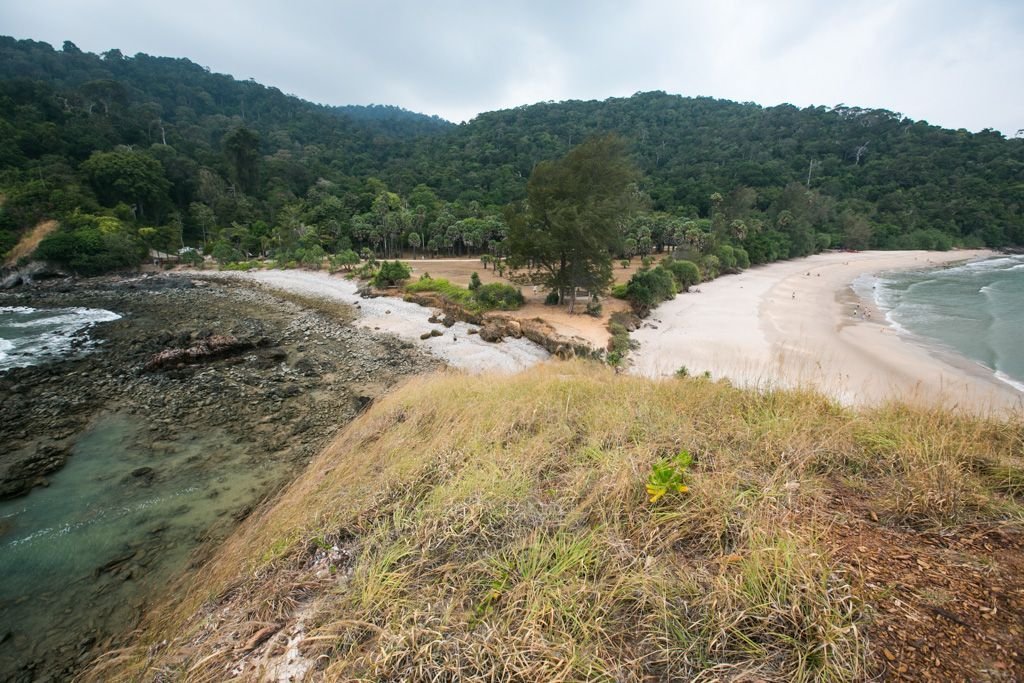 The Verdict on Koh Lanta

So, what did I think of Koh Lanta? I liked it, but I think I would have liked Koh Lanta more if I’d had better weather. It was cloudy and ridiculously hot and muggy the entire week. Most of the sunsets were a bust, and if I ever strayed from the beach I’d be coated in all sorts of sweat.

I also found that most visitors to Koh Lanta were families or couples. I didn’t see many other independent travelers at all.

One thing I didn’t realize beforehand was how big the island was. It makes having a motorbike almost a necessity to get from A to B on Koh Lanta – otherwise, like me, you’ll have limited mobility and won’t be able to see as much on foot. I’m way too frugal to pay for a tuk tuk to go everywhere by myself, but if you’re traveling with other people it’d be an affordable way to get around.

And lastly – Koh Lanta is pretty, but it’s not stunning. You will not find real white sand beaches here, nor bright blue waters. (Tip: go to Koh Kradan for that!) 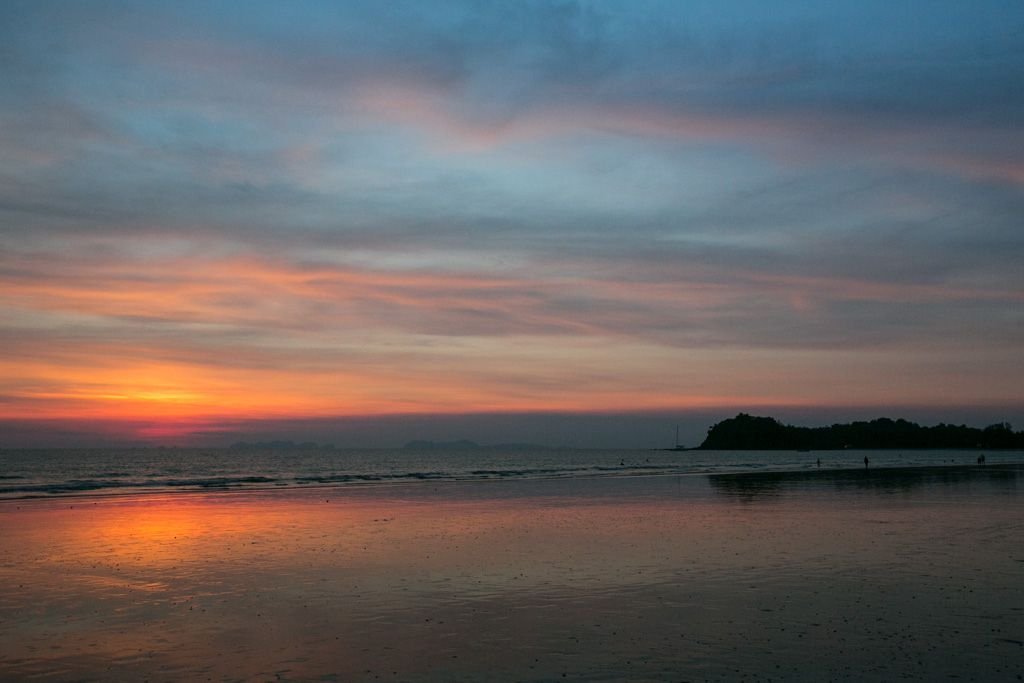 Still, Koh Lanta is a fantastic holiday spot. It’s laidback, scenic, and has great restaurants (for my favorites, see: The Best Of Koh Lanta). I’d recommend it most to families, couples, or small groups of friends – there are other islands better suited for the solo traveler!

Have you been to Koh Lanta as a solo traveler?