Filed under things that gave me culture shock after moving from New York to Sydney: the fact that Boxing Day is an actual holiday in Australia. In the US, we typically don’t have the luxury of having the day after Christmas off from work; go figure that now that I live in a place where this is a thing, I no longer work an office job.

So really, Boxing Day is and always was just a normal day for me.

Well, until this past year! 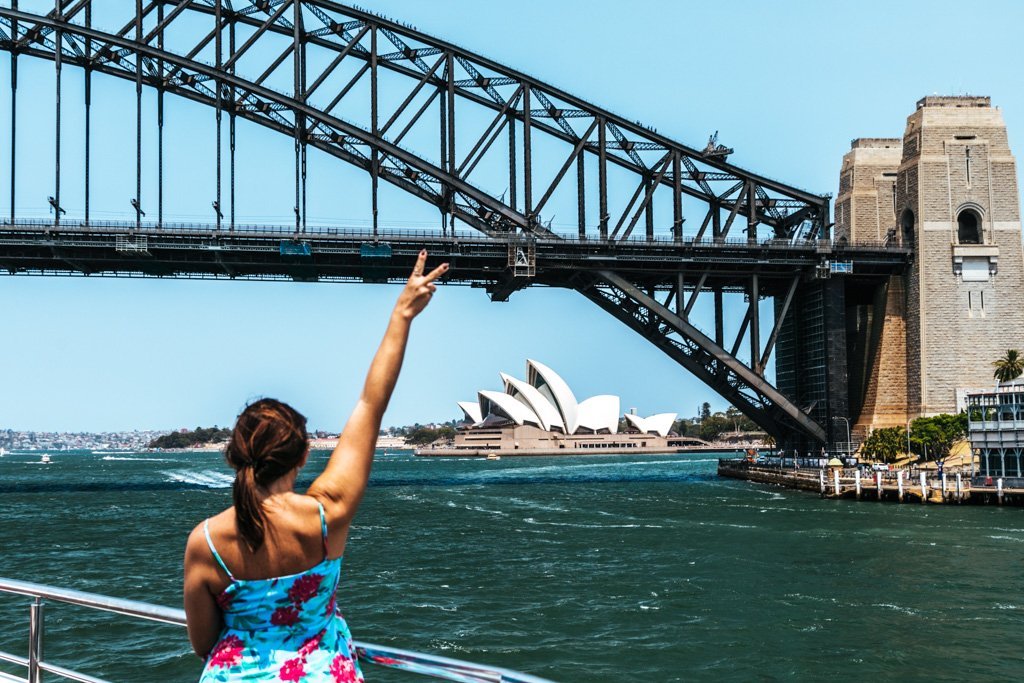 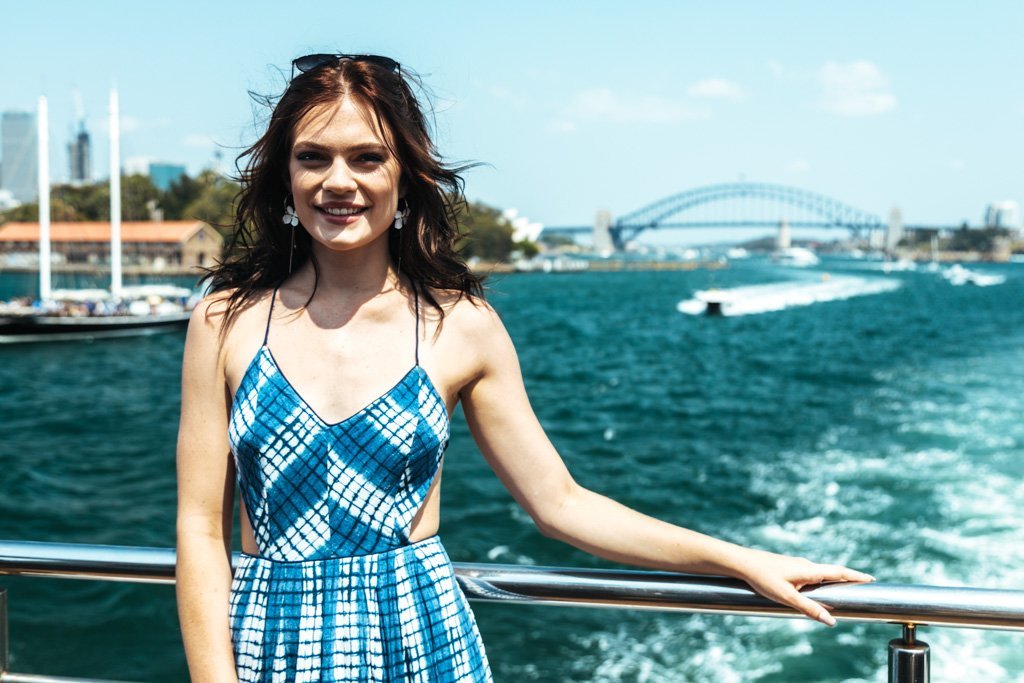 This Boxing Day I got to spend sailing on Sydney Harbour on a Captain Cook cruise. Not just any cruise, though: this one was with a prime view of the annual Sydney to Hobart Yacht Race, which kicks off every December 26th from Sydney Harbour. I’d never gotten to see the race before this year, so I was pretty excited to experience it for the first time.

PLUS, Santa gifted us Sydneysiders with a warm, blue sky day (an increasing rarity since the bushfires began a few months ago), AND I got to bring along my old flatmate and sister from another mister, Britt.

It was a goooood day, you guys. 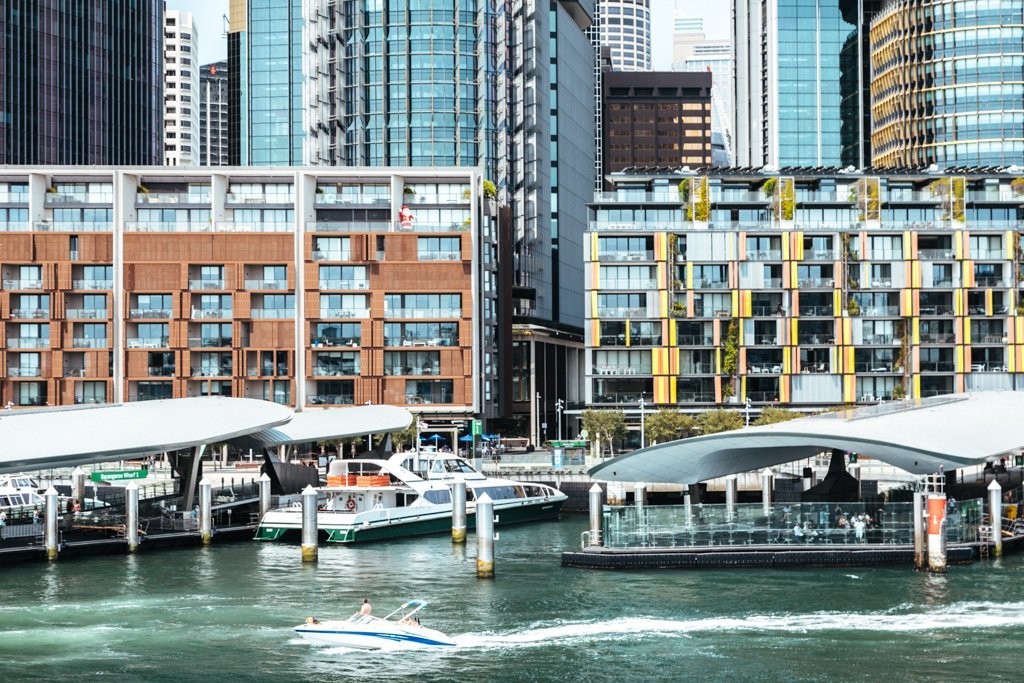 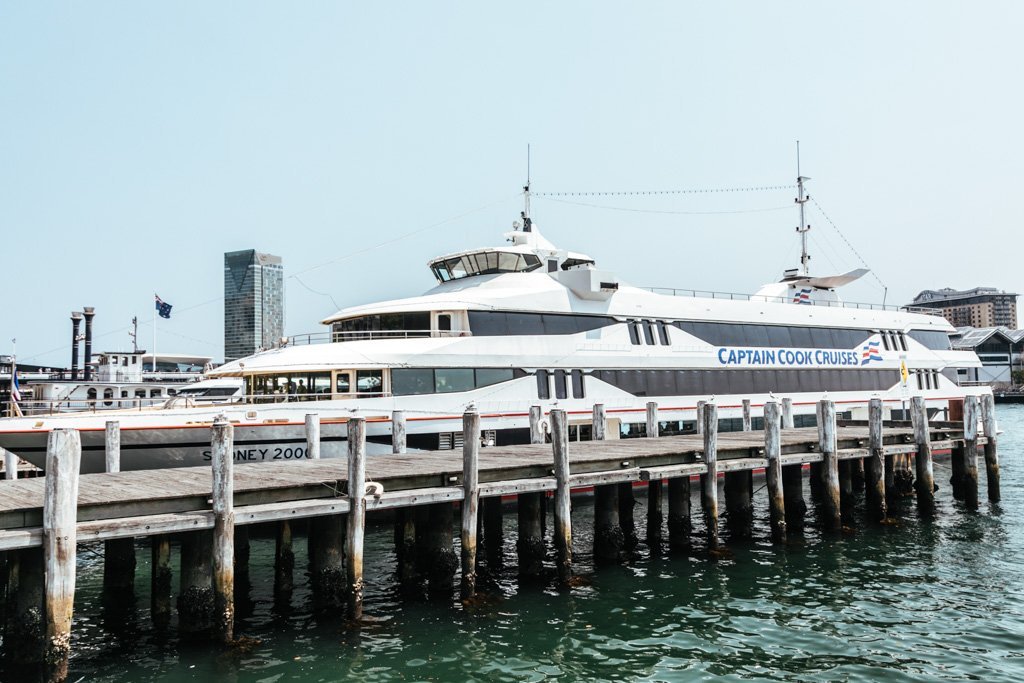 We boarded the MC Sydney 2000 and took our seats at a private table that was literally within arm’s reach of the dessert table. The cruise photographer wasted no time in taking photos of each party (get ‘em before they’re too busy eating and drinking, smart move). She later came back with a couple shots of us printed out and presented in one of those thin cardboard frames, which guests can purchase for I believe $16 a pop. We declined, as we had plans to take our own photos later on ;)

Shortly after we set sail, they opened up the buffet for lunch. We were pretty dang impressed with generous servings of seafood and variety of veggie dishes in the spread. You definitely won’t go hungry on this lunch cruise! I was also under the impression that alcohol was not included with the club deck tickets we had, but the waiters were walking around serving complimentary house wine. 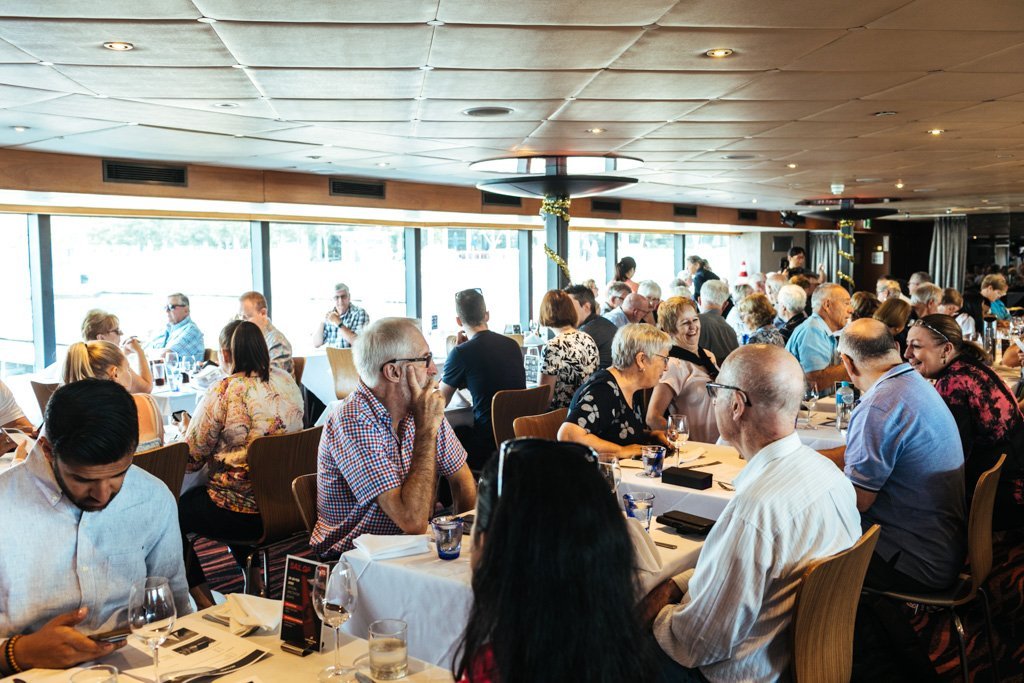 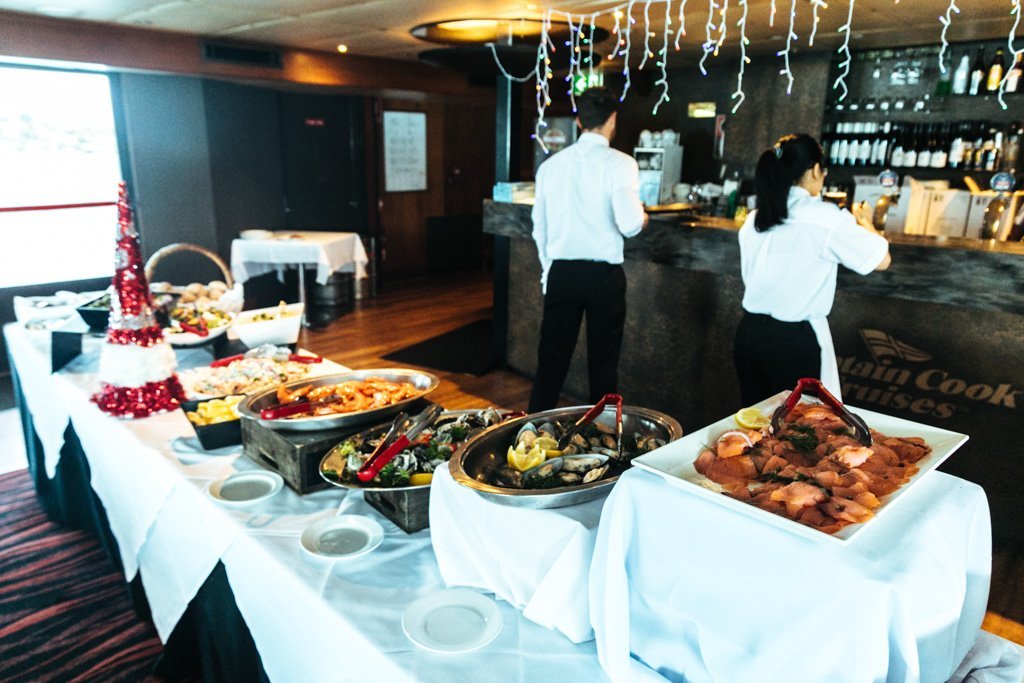 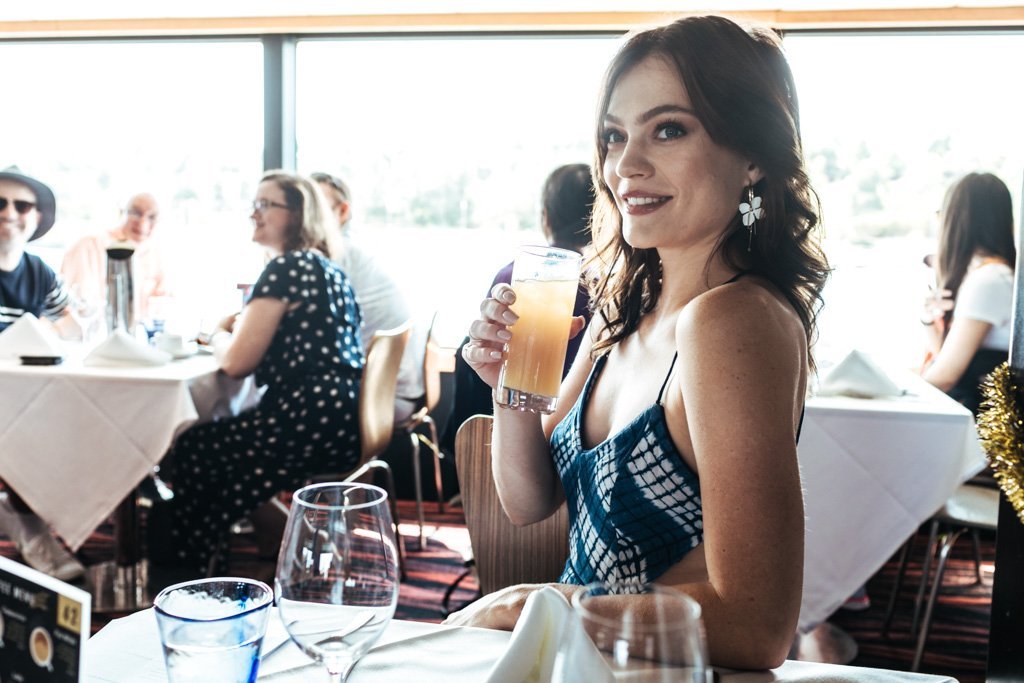 We were sat at the bottom of the boat’s 3 levels, but spent most of the day on the top deck getting sunburned and capturing our signature derps on camera. Derps are kiiiiiind of our thing. I feel like Britt and I should have a derp-off one of these days… 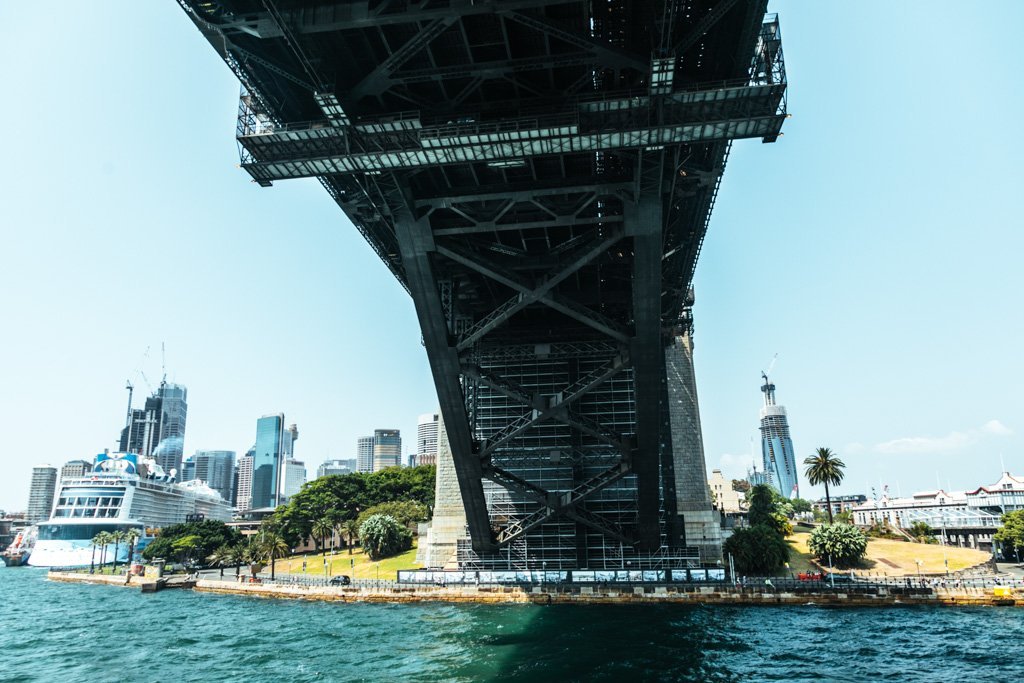 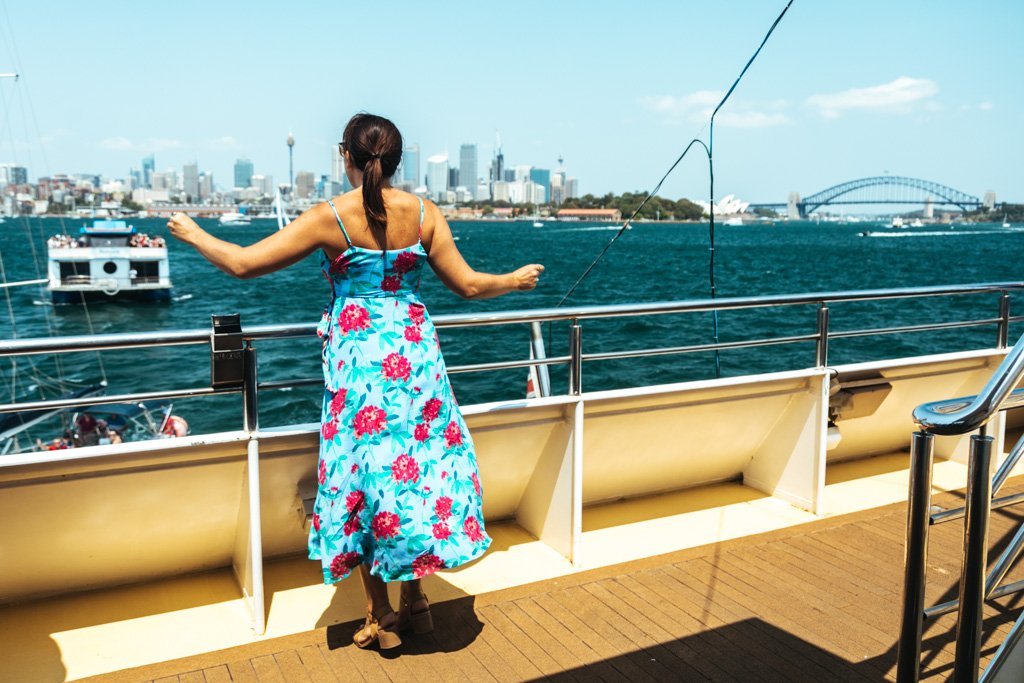 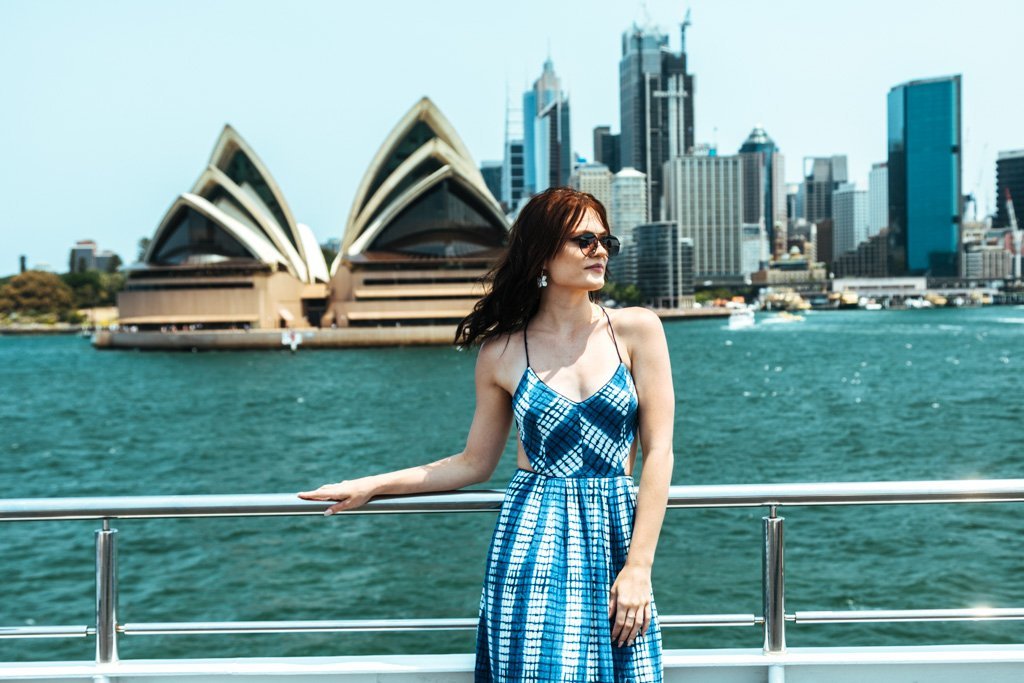 Our boat set off from Darling Harbour, passed by the Sydney Harbour Bridge and Opera House, and was anchored for most of the time around Parsley Bay (which is close to the outermost point of the harbour). From here, we got to watch the race kick off around 1pm.

I actually think there may have been more spectator boats than yachts on the harbour. It was quite a turnout! And at one point, we counted 12(!) helicopters in the air. 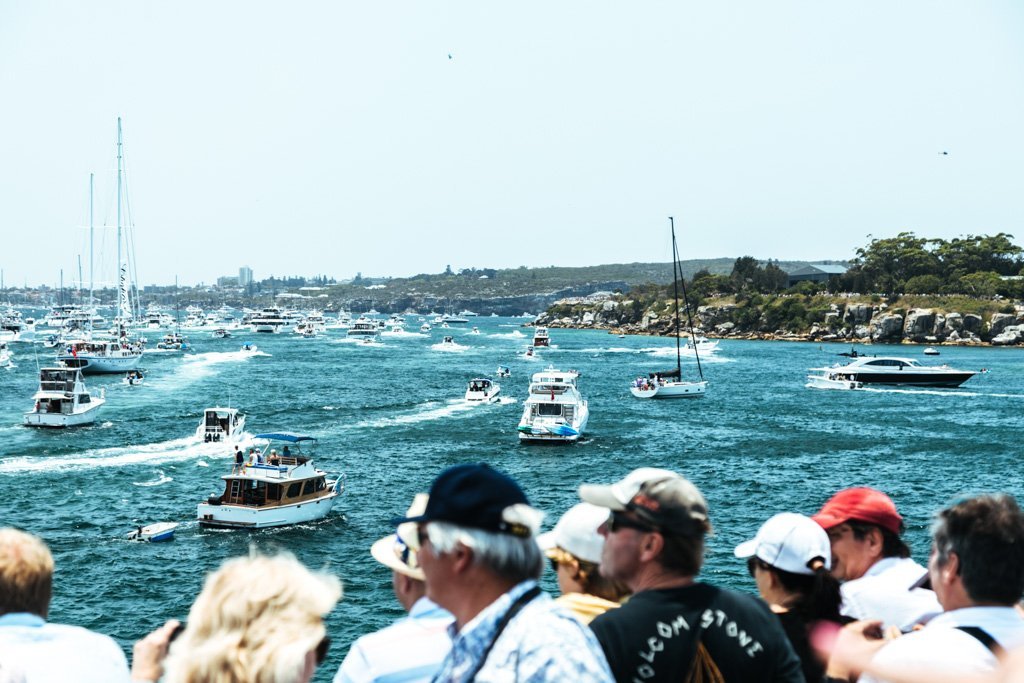 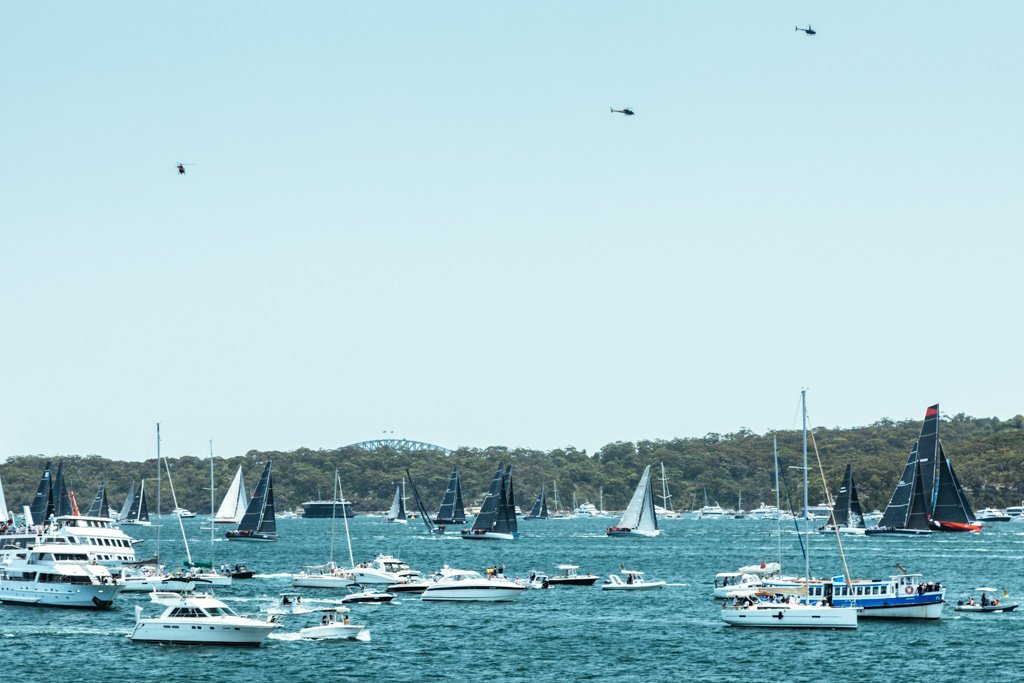 I don’t know much about sailing or this particular race, but it was pretty neat seeing all the yachts glide by. And also a bit anticlimactic.

Honestly, I was just happy to be on a boat, in the sun, on Sydney Harbour – race or no race. It was such a glorious day! And I swear, these views of the Sydney Opera House and Harbour Bridge just never. get. old. 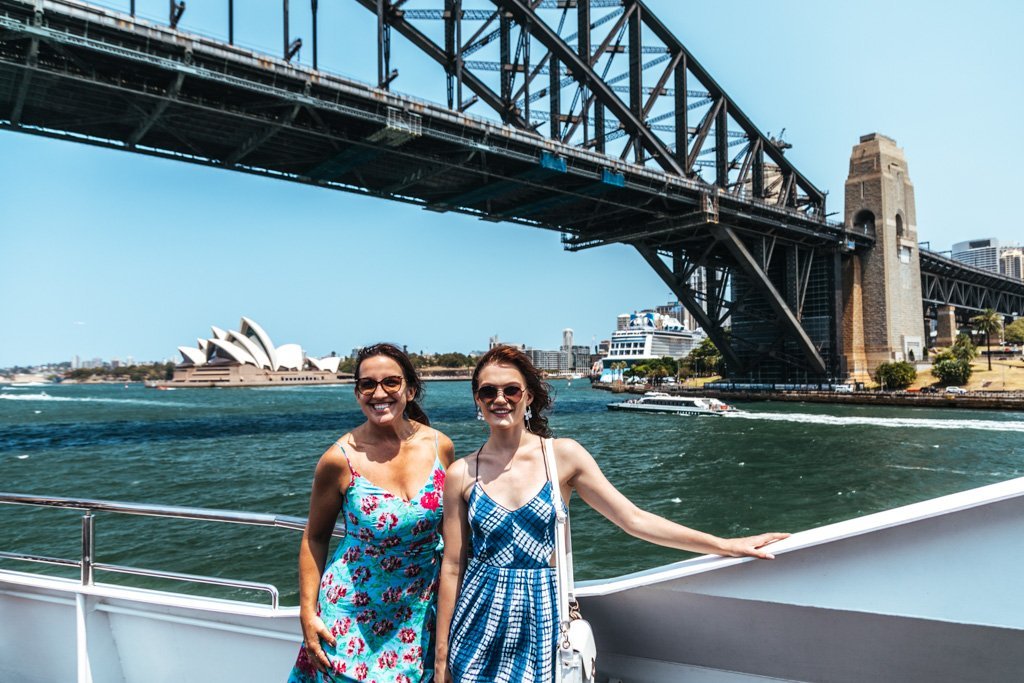 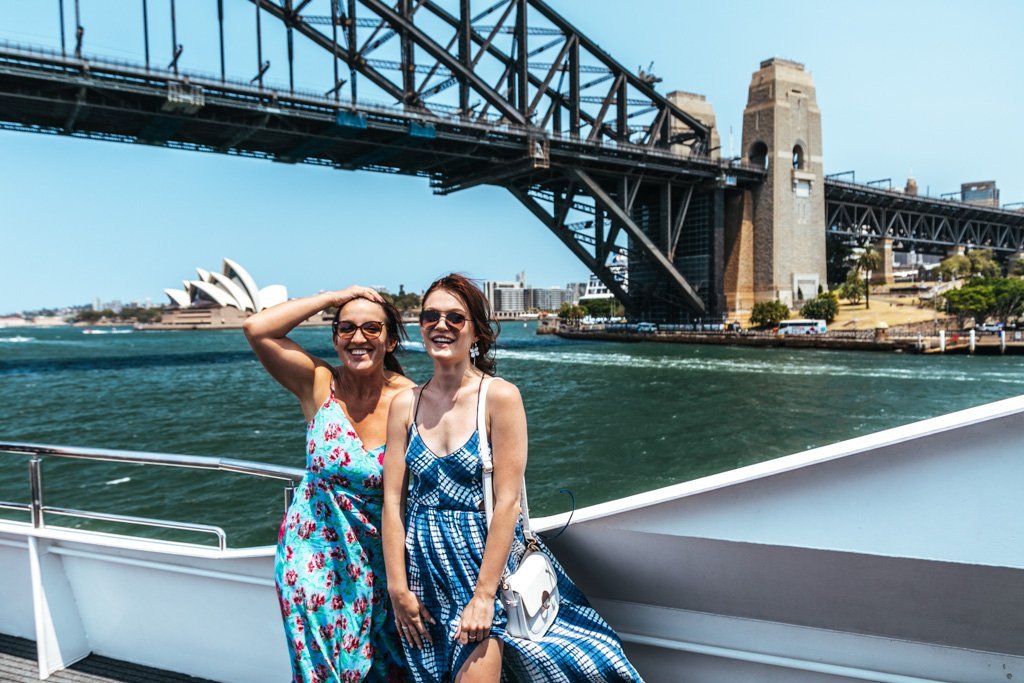 So yay, I finally got to celebrate Boxing Day!

If you’re interested in booking this Sydney Harbour cruise, there’s also an Australia Day cruise that is virtually identical in itinerary and fanfare (complete with a gun salute, smaller boat races, and plenty o’ fancy aircrafts flying overhead). So if you’re looking for something to do this coming Australia Day, you should definitely check it out – it’ll be a fab day out. 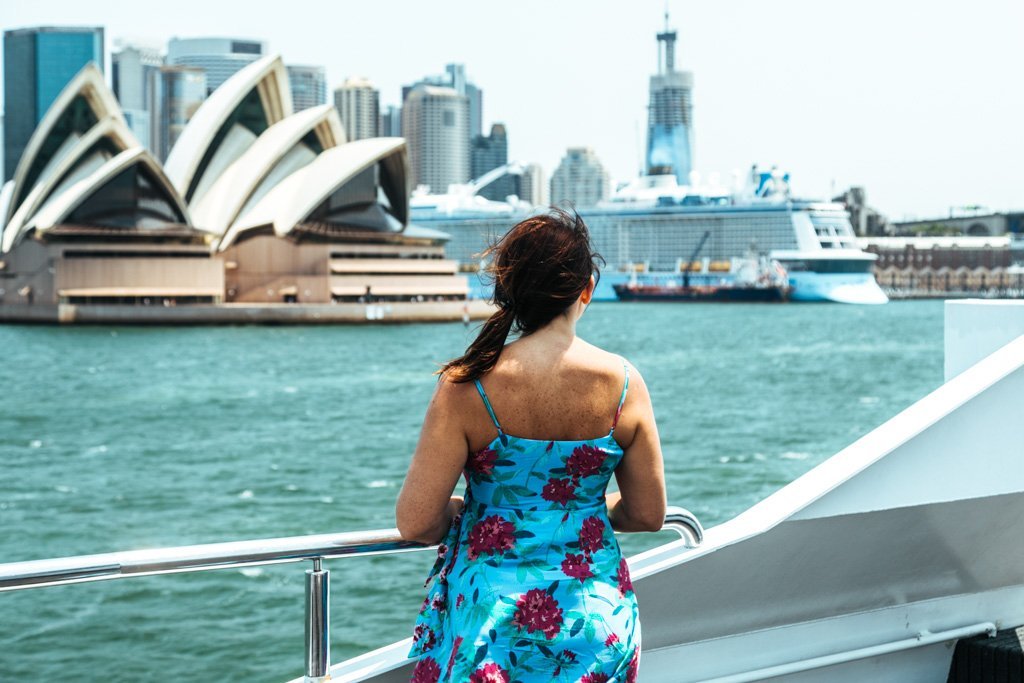 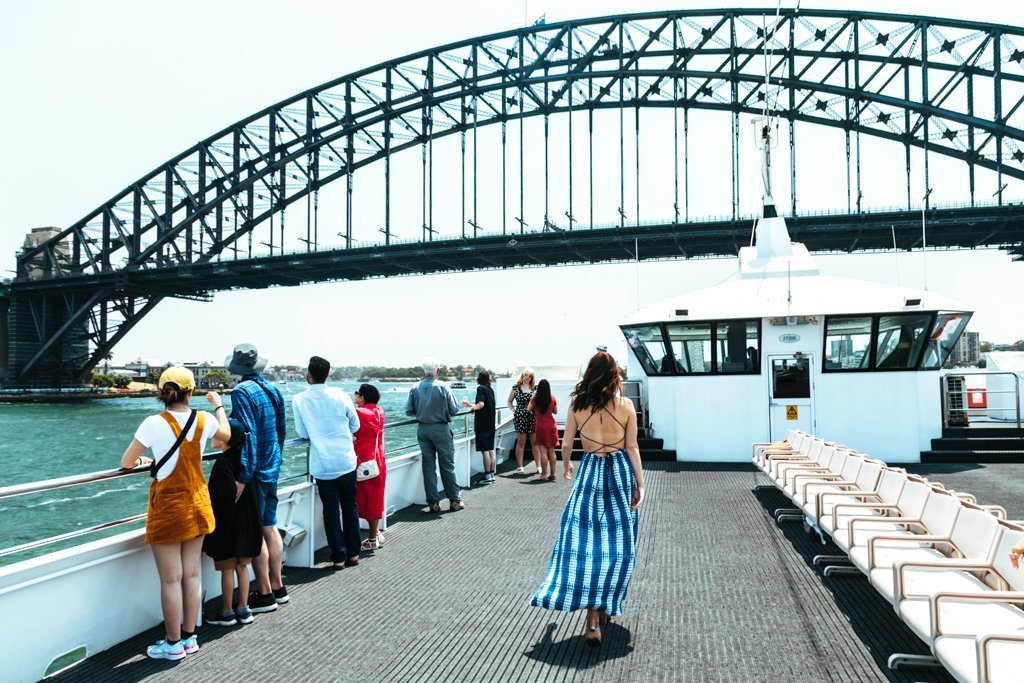 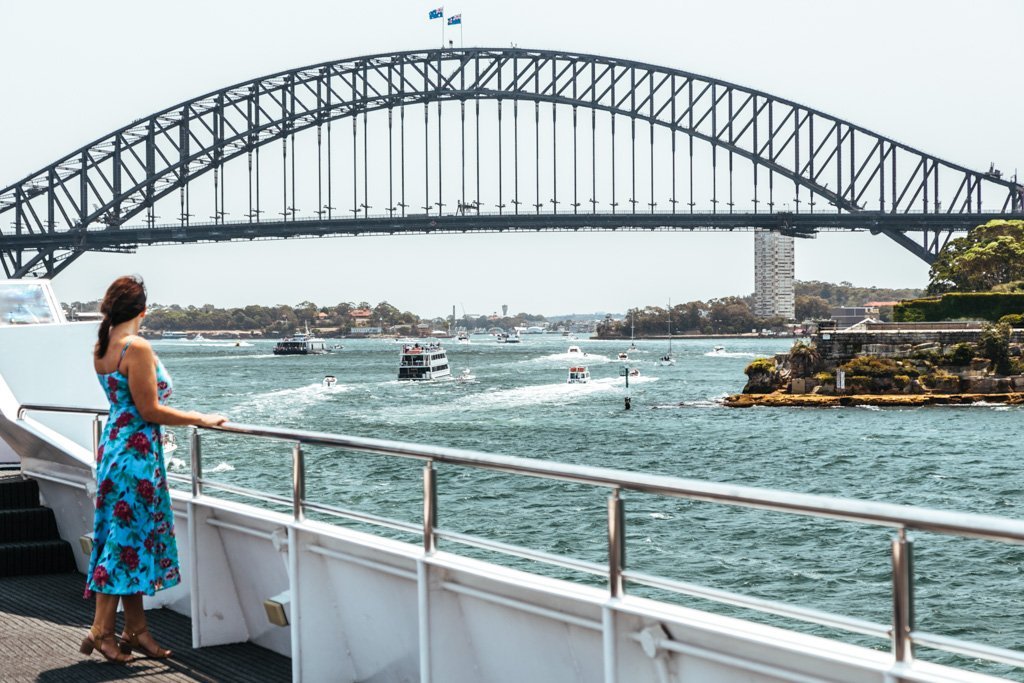 Thank you to Captain Cook Cruises for inviting us to join their Boxing Day cruise! Note that all opinions expressed here and elsewhere on this blog are my unbiased own, and are uninfluenced by any gifts or incentives I may receive. The Sydney to Hobart Lunch Cruise operates on Boxing Day (December 26) each year, from 10am-2pm. Prices start at 169 AUD for a Show Deck ticket, which is what we had; there are other tickets available that offer multi-course meals and nicer wines.

The Australia Day Lunch Cruise operates on Australia Day (January 26) each year, from 10am-2pm, and is almost identical to the Sydney to Hobart Lunch Cruise. Prices start at 159 AUD for a Show Deck ticket, but there are other ticket types available as well.

Tags: AustraliaboatNSWSponsoredSydneySydney Harbour
Previous ArticleAustralian Bushfires: Here’s What You Can Do To Help
Next Article 2019 in Review: Like 2018, But On Crack